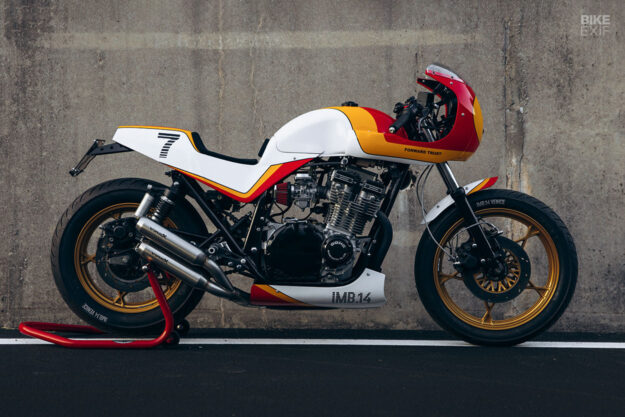 Some aficionados believe that the only way to design an attractive motorcycle, is to maintain a perfectly horizontal foundation line. But the German designer Hans Muth thumbed his nose at this convention, when he penned the mighty Suzuki Katana. He did believe in the importance of a good “flyline”—but on the Katana, he deliberately made it angular and dramatic.

His design raised more than a few eyebrows, but it also went on to become iconic. These days, it presents customizers with an interesting quandary: lean into the Katana’s inherent quirkiness, or attempt to smooth out its lines? Maurizio Carraro has done a bit of both here, with intriguing results. 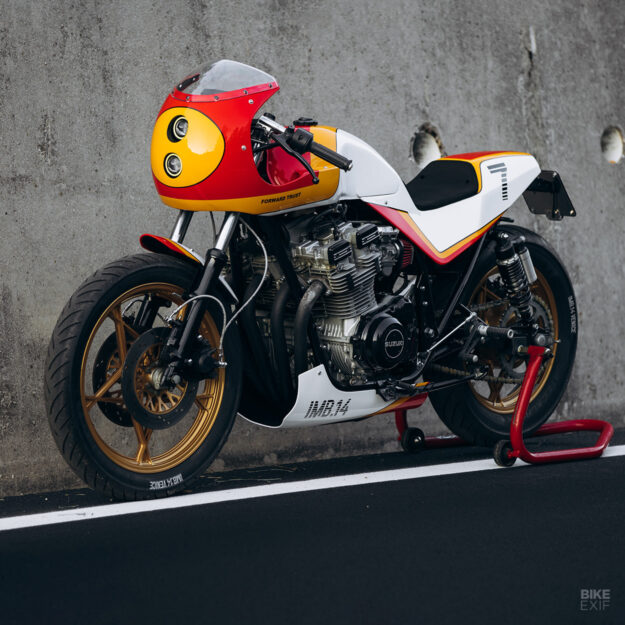 Maurizio runs the workshop Imbarcadero 14 Venice, where he’s built up a portfolio that covers a broad range of brands and styles. “The bike was commissioned as a gift for the 50th birthday of an old friend of mine,” he tells us, “a person passionate about motorcycles and cars. So the bike had to be fast and safe to ride, to meet the expectations of an experienced rider.”

The donor was 1986-model Suzuki GSX 1100 Katana, and the brief called for a café racer build. But Maurizio injected shades of classic sport tourers in it too—and a hint of the original Katana silhouette. 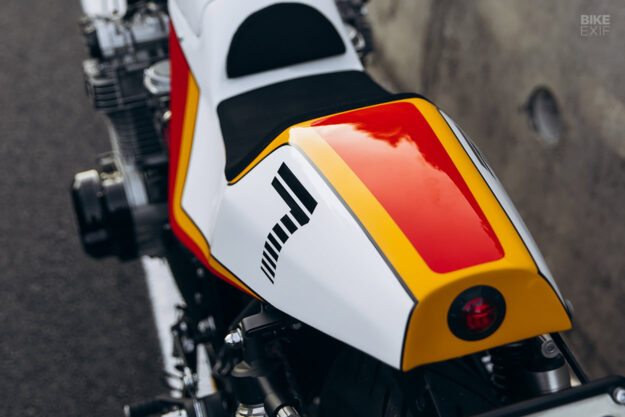 To achieve this, a complete new set of clothes had to be fabricated for the Katana 1100. Maurizio mocked up the design using Photoshop first, then brought it to life in aluminum.

It’s fast becoming the norm to use 3D printing to create molds for shaping metal over, but Maurizio didn’t take that route. Instead, he shaped each part freeform with the help of his regular collaborator, Ronnie Biasibetti. Their work includes the front fairing and fender, fuel tank, tail section and belly pan, tweaks to the subframe, and the one-off bracket that holds the fairing. 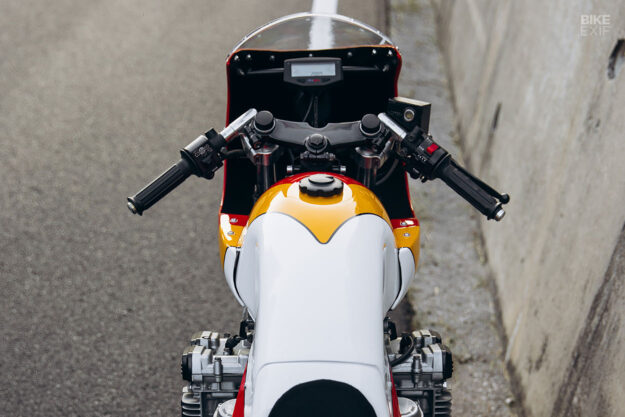 To add a touch of modernity, Maurizio embedded a pair of LED projectors up front, and an LED taillight out back. The cockpit retains the original Katana yoke and clip-ons, but sports new grips and a digital Acewell speedo.

Lower down are a new set of Tarozzi rear-sets. The tail piece is adorned with a slim racing seat pad, while a hand-made license plate mount keeps things street legal out back. 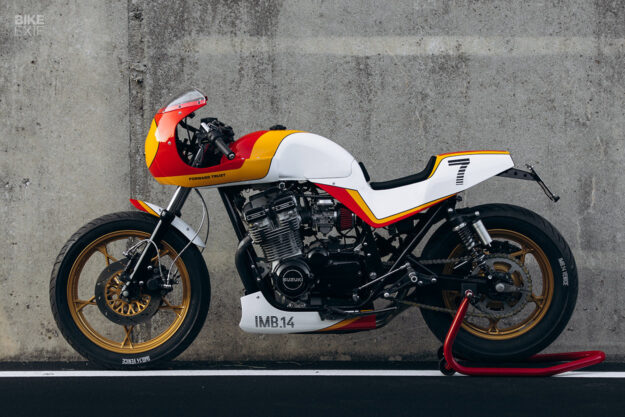 The bodywork might be the biggest change, but the rest of the bike got a ton of attention too. The front forks were rebuilt with new internals, while the rear shocks were swapped out for a set of longer piggyback units. The wheels and brakes are original too, but everything’s been refurbished and repainted.

Maurizio also stripped the motor to clean and refinish it, inside and out. It looks factory fresh now, with contrasting black and metal finishes. Even the logos have been polished back in, giving the bike a period correct feel. 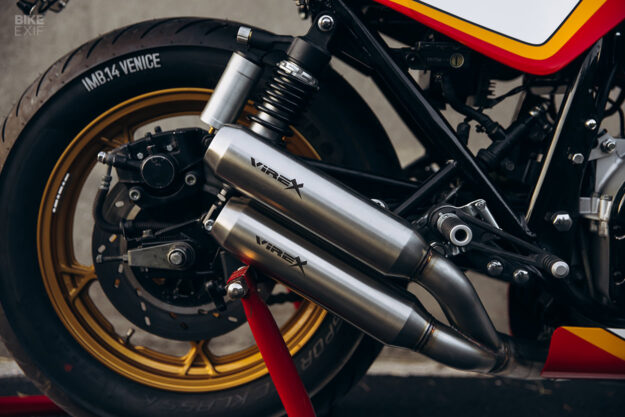 A row of pod filters are tucked in below the bodywork, with a pair of Virex mufflers doing duty further back.

Race fans might recognize the Katana 1100’s new color palette. It takes inspiration from Barry Sheene’s 1976 Suzuki XR14, although it’s a reinterpretation rather than a replica. It’s complemented by a hit of gold on the wheels, with the frame refinished in black. 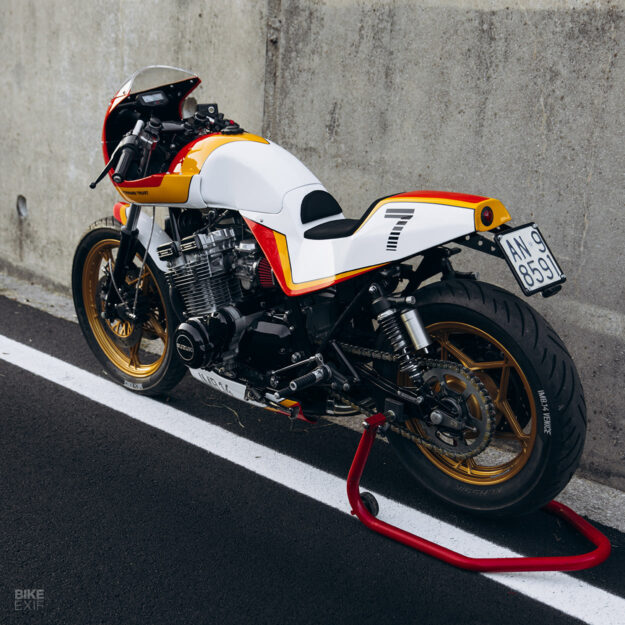 It’s an unusual look for the Katana, but we’re into it. Think of it as a Katana from an alternate universe, where Herr Muth was obsessed with classic race bikes and didn’t own a protractor. 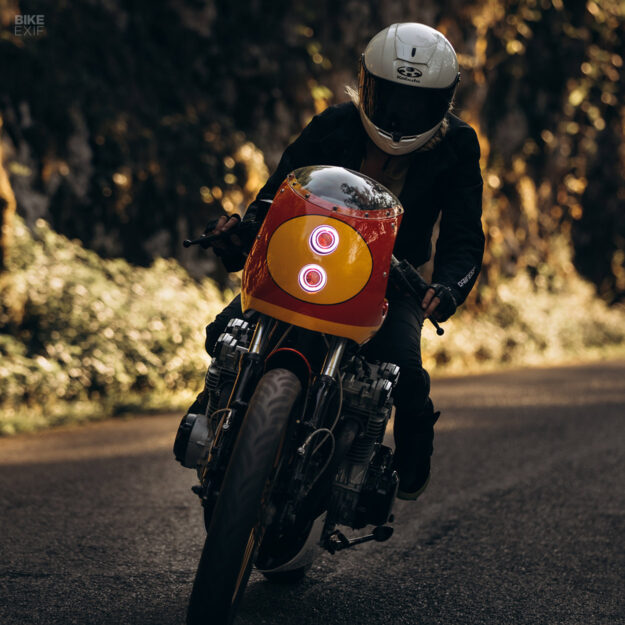