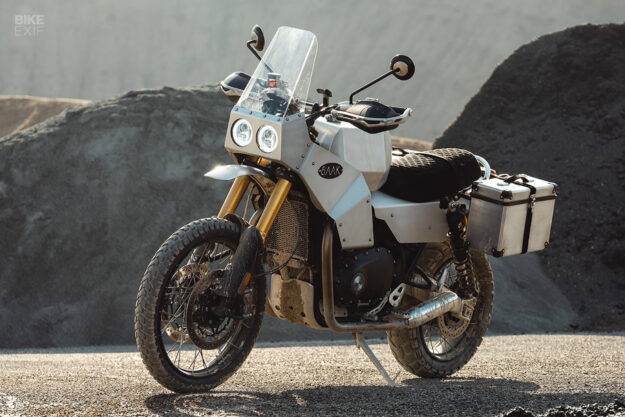 Triumph makes some of the best adventure bikes out there—including one machine that, on the surface, seems like an unlikely candidate. The Triumph Scrambler 1200 is technically classified as a modern classic, but it’s actually a bonafide off-road ripper.

By combining vintage looks with great ergonomics, a big front wheel and long, cushy suspension, the British marque has built a motorcycle that goes even better than it looks. And that’s not a secondhand opinion either; we’ve ridden the Scrambler 1200 enough to know what it’s capable of. What we’re not so sure about, is what we’d change if we had to customize it. 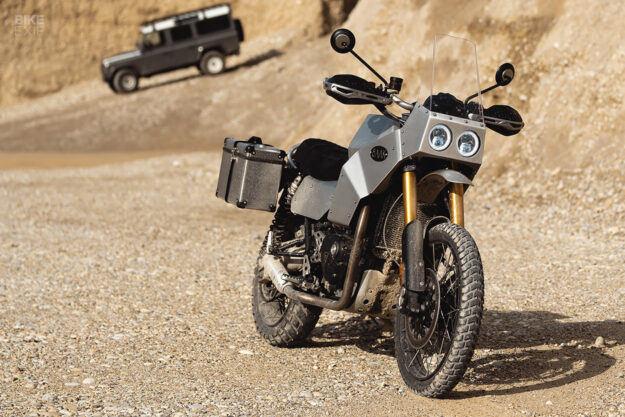 BAAK Motocyclettes has an answer. They’ve taken a stock Triumph Scrambler 1200, and doused it in rally-style aluminum bodywork to make it even more adventure-ready.

Originally opened a decade ago in France, BAAK has now grown to a 25-strong team, with headquarters in Lyon and Los Angeles. Their goal on this project was improve the Scrambler’s long range adventure touring chops. It’s a delightfully minimalistic bike in stock form—but BAAK felt it lacked the fuel capacity, wind protection and luggage carrying ability of its more focussed stablemates. 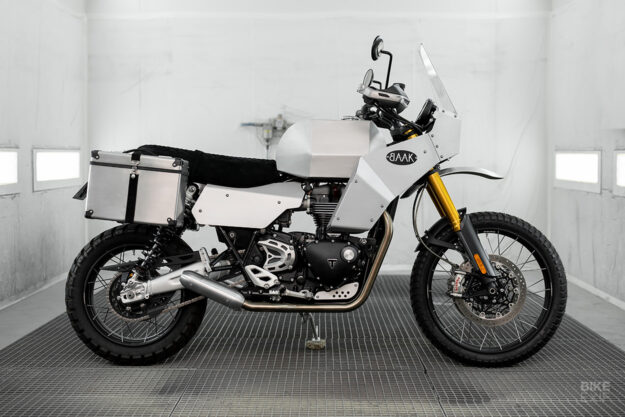 Working from their workshop in Lyon, they spent 18 months turning the Scrambler into the machine you see here. And while it sure looks cool, function trumped form at every turn.

“A BAAK bike is not meant to stay in an office or a living room,” says company founder, Rémi Reguin. “We design each bike like an extension of its owner. Every bike coming out of our shops in Lyon and Los Angeles is unique, exclusive, sometime polarizing, but never without thinking about its functionality.” 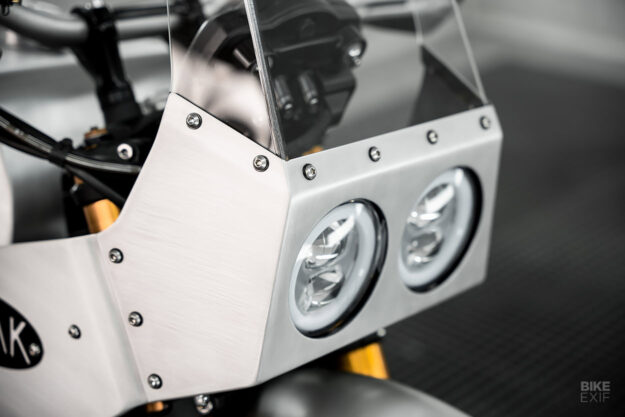 Starting at the front, BAAK fabricated an aluminum fairing that wraps around the stock dashboard, and extends low enough to deflect air from the rider’s leg. Lighting the way are two high-end LED lights, with a polycarbonate windscreen mounted higher up. The whole setup gives off a strong vintage Cagiva Elefant vibe.

The whole arrangement is attached to a bespoke stainless steel mounting system. And the fairing brackets attach to existing mounting points on the frame—so everything can be bolted on without any cutting or welding. 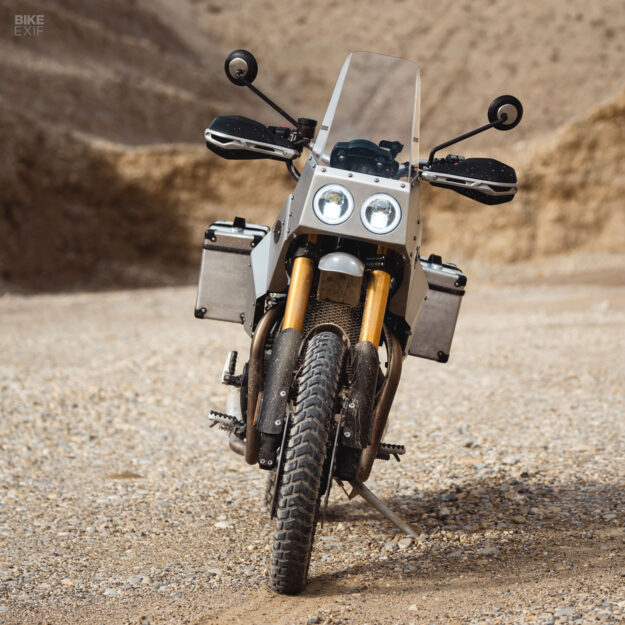 The rest of the front-end is mostly OEM stuff, because most of the Scrambler’s stock bits work really well. The oversized bars, digital clocks, burly hand guards and 47 mm Showa forks are all standard issue, and the high-mounted fender comes from Triumph’s own aftermarket catalog.

BAAK also left the Scrambler’s 21F/17R tubeless wheels alone, along with its Brembo brakes and fully-adjustable Öhlins rear shocks. Even though the bike’s original fuel tank is a looker, its 4.2 gallon capacity wasn’t going to cut it, so it was binned. 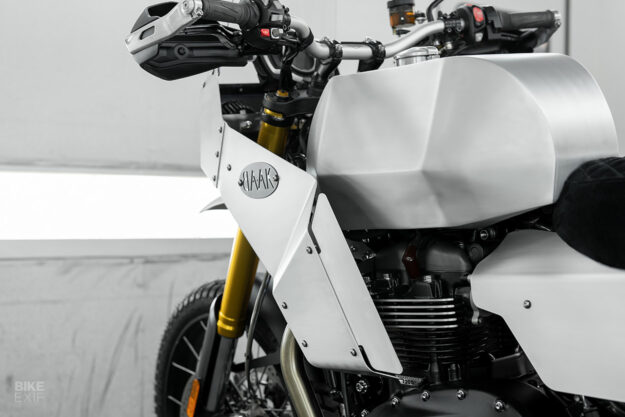 Working with aluminum again, BAAK hammered out a new reservoir to take its place. Unashamedly bulbous, it’s all business, carrying 6.6 gallons of petrol for a total range of 180 miles. Like the fairing, it’s been designed to bolt straight onto the Scrambler.

One weak point on the Scrambler is its questionably thin seat. BAAK have swapped it for a generously-padded replacement, covered in a luxe suede. It’s flanked by a pair of handmade aluminum side covers. 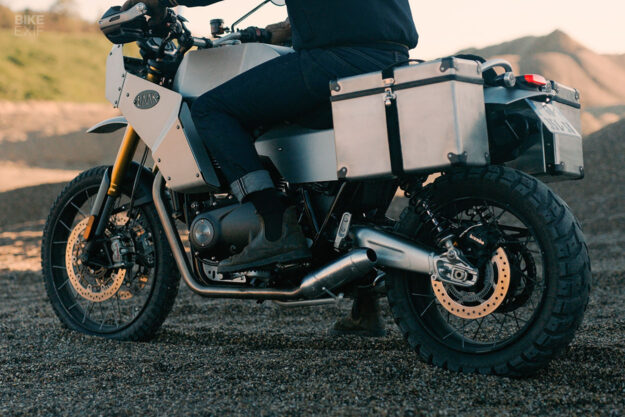 Out back, the Scrambler carries a pair of custom-made aluminum panniers. Each one is good for 18 liters of storage, and trimmed with suede handles and straps.

To mount them, BAAK used a set of SW Motech pannier brackets specifically designed for the Triumph, then modified the exhaust side’s bracket. That’s because the Scrambler’s stock exhaust runs high, necessitating the use of a slimmer pannier on the right hand side to make room. Changing that configuration meant that the team could maximize the bike’s carrying capacity. 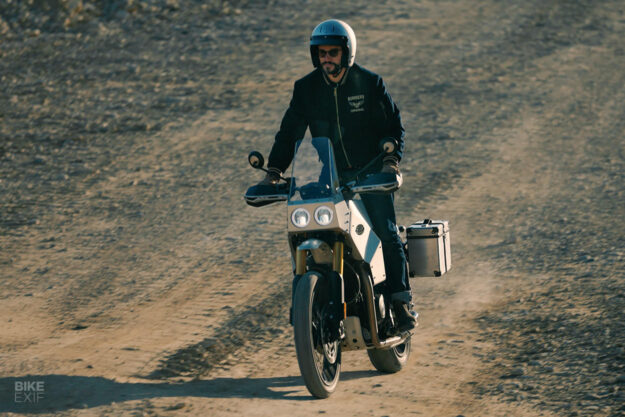 Replacing the OEM exhaust system is a pair of custom-built headers, running low and exiting in stubby mufflers. The rear’s finished off with a couple of tasteful tweaks—specifically a BAAK license plate bracket, and a slimmer LED taillight.

Something you won’t find on this upgraded Scrambler, is paint. Opting to show off their handiwork and emphasize the geometric nature of the build, BAAK simply clear-coated the aluminum parts. Decorative bits are limited to a pair of badges attached to the fairing. 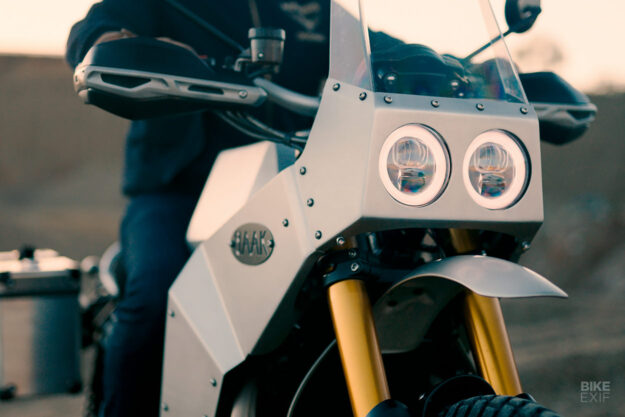 Since this system is modular and doesn’t need any major fettling to fit, BAAK are planning to offer it as a kit—and to take orders for full builds. If you’ve got a long ride planned, it’s an intriguing alternative to the swarms of lookalike plastic adventure bikes out there. 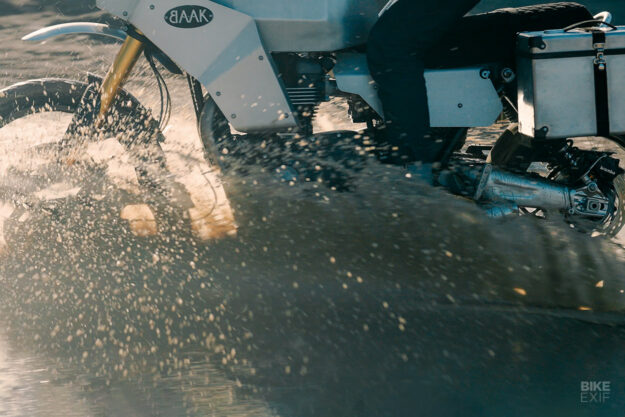