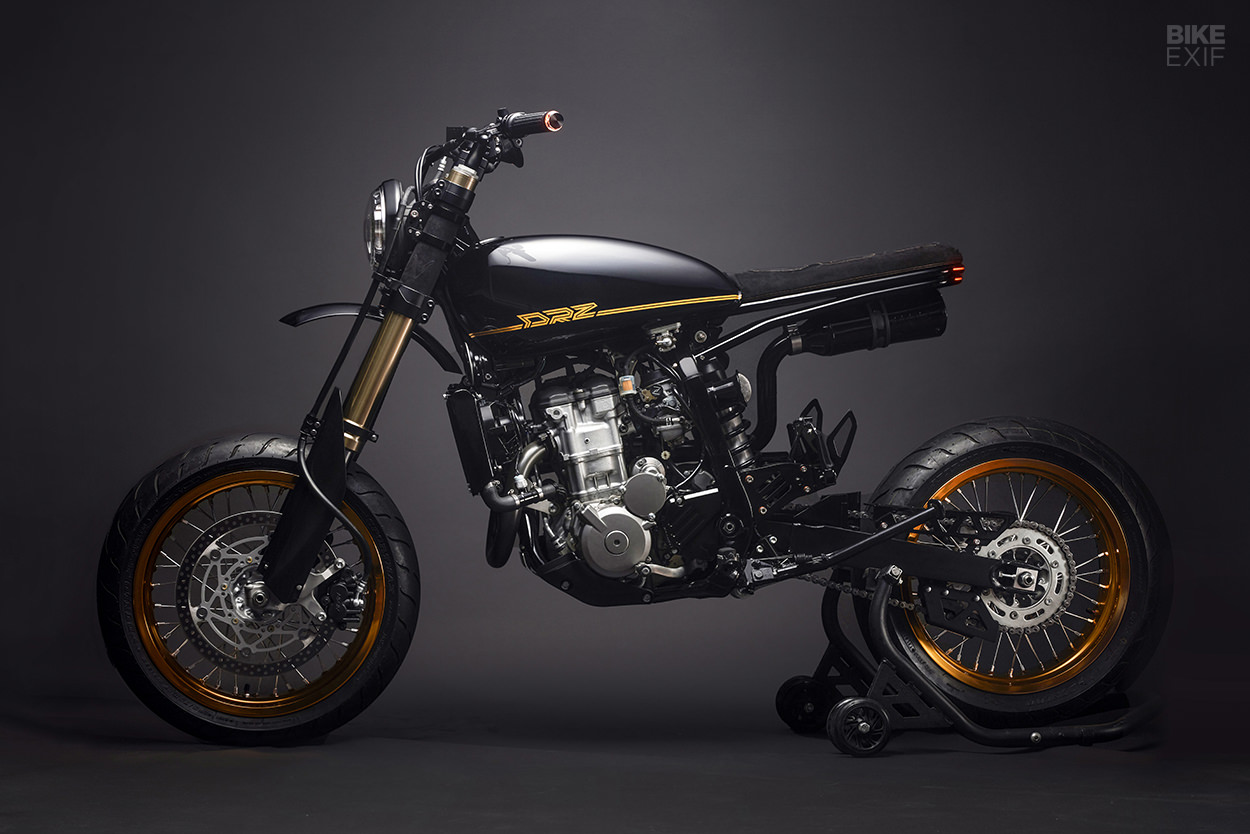 Building a custom bike is usually a succession of challenges. And sometimes, the bike itself isn’t the biggest challenge: it’s the builder’s skills or circumstances, or curveballs thrown by life.

The story of this Suzuki is packed with curveballs. It was built by Argentine-born Sebastian ‘Seba’ Achaval, who likens it to a country song—because its greatness comes from ‘leaving tragedy behind.’ Hence its name ‘Cash,’ after The Man In Black 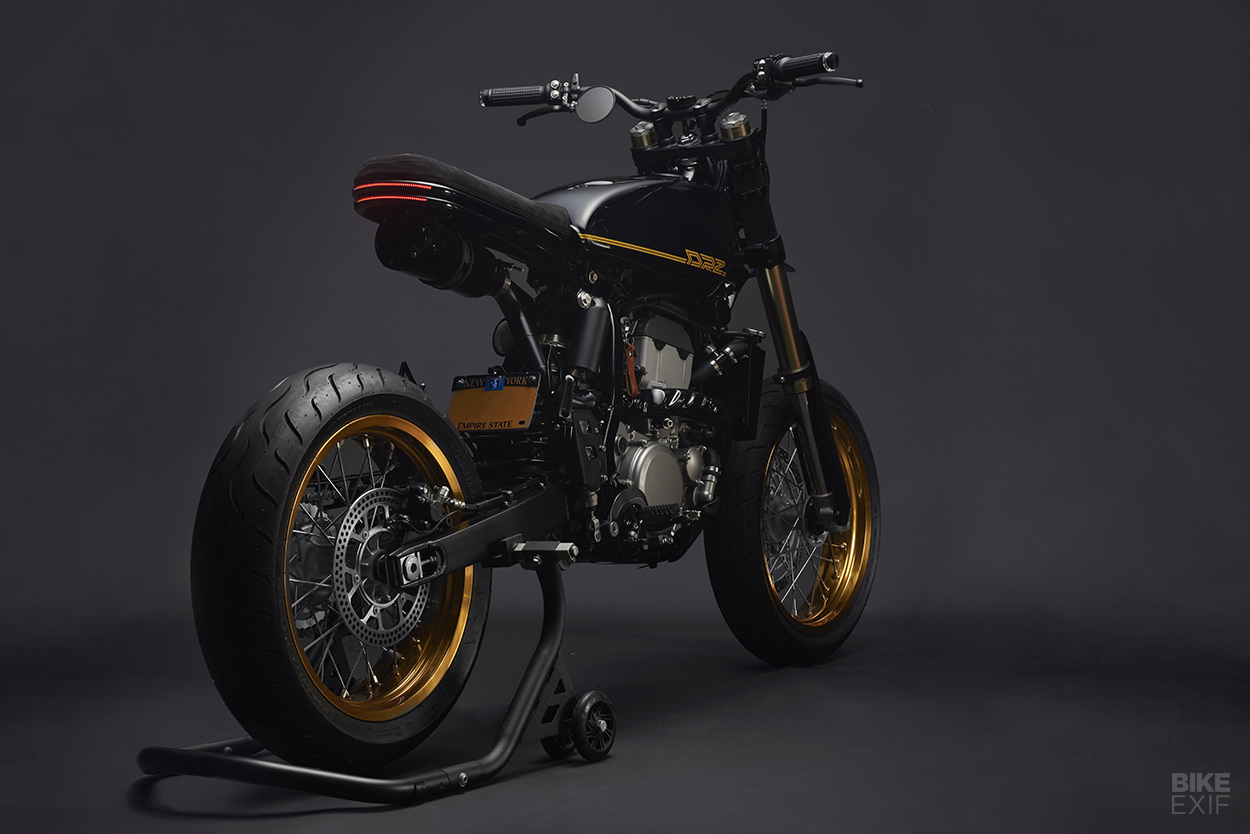 The story starts with the owner, a man of admirable patience called Jorge. He bought this 2018 Suzuki DR-Z400SM to get a fun and reliable bike with good performance. But he also found the aesthetics unexciting, so he budgeted for custom work.

A DR-Z on display at the New York shop Jane Motorcycles caught Jorge’s eye. It’d been built by Mark from Brooklyn Moto, and before long, Mark started working on Jorge’s bike. 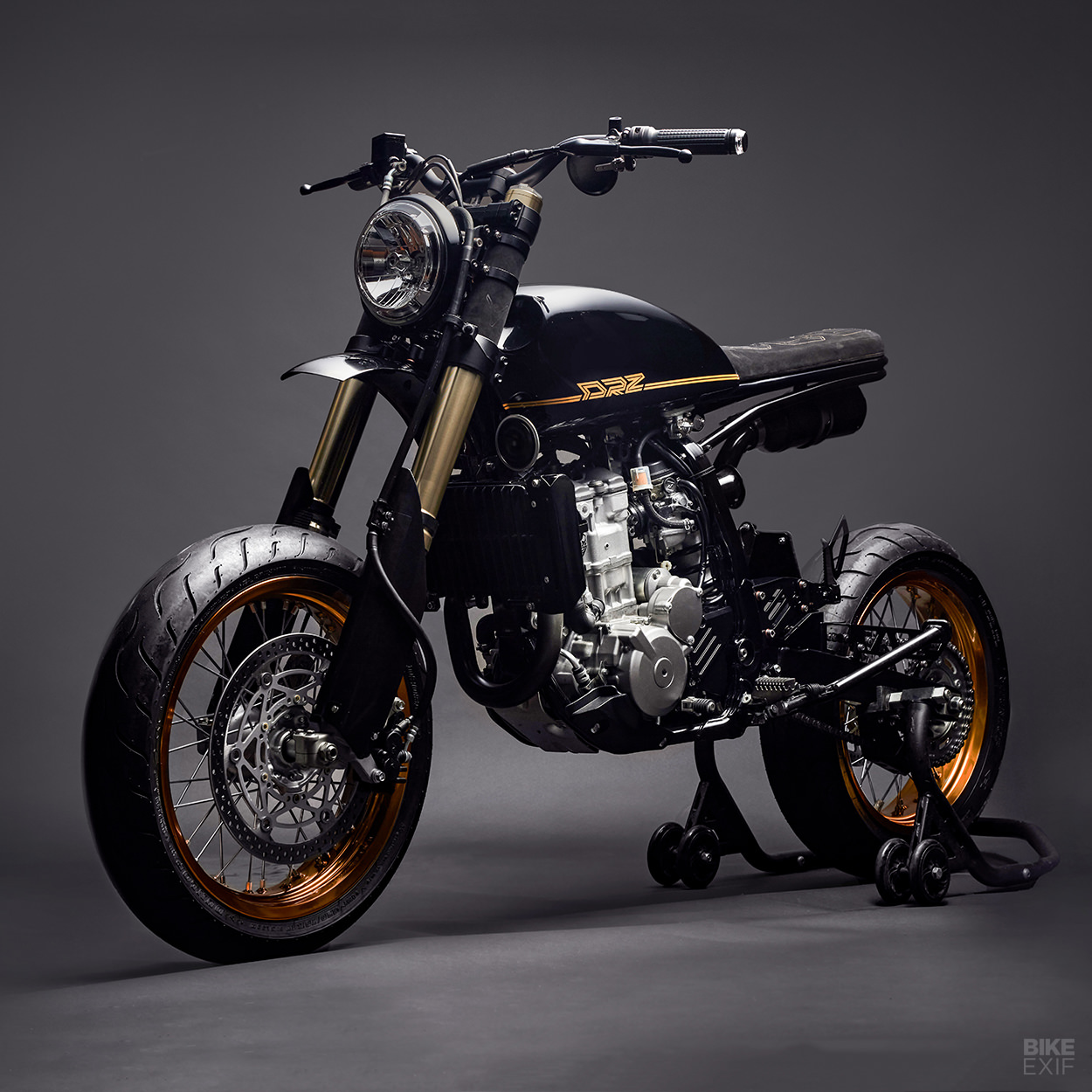 A few weeks into the project, Mark had to step aside to focus on an urgent personal matter. He put Jorge in touch with Seba, who has been building bikes since he was 15, and wrenches in the same Brooklyn space under the moniker ‘oneYedeer.’

“In the shop I work alone,” Seba tells us. “I pretty much do everything, with some limitations around tools and space. I send my paint jobs to the one and only Robbie Nigl, and my powder coating is done by Eazy Powder Coating…but the rest is just me.” 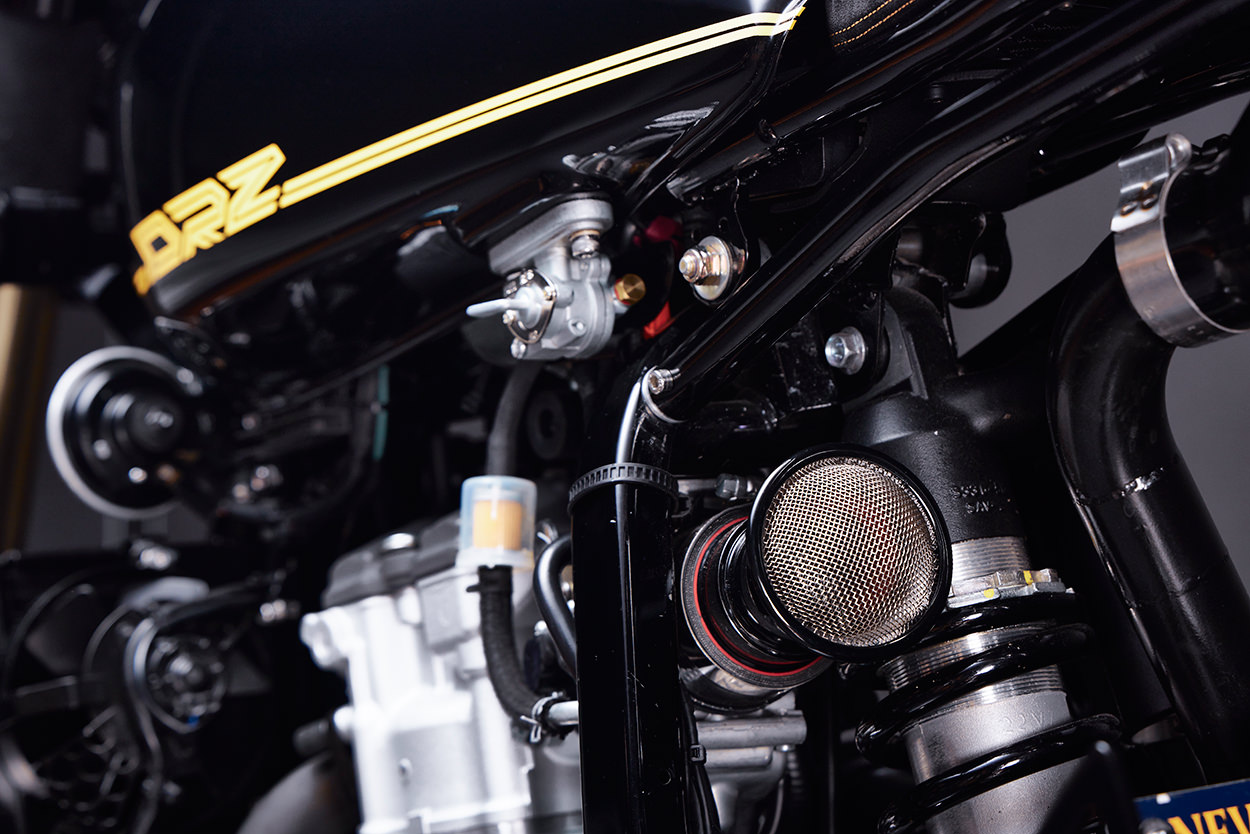 Seba delivered a new vision for the DR-Z400, which Jorge liked, even though it meant a complete overhaul. The mods completely change the vibe of the bike: the enormous rear overhang of the stock supermoto is gone, along with the motocross-style seat and swathe of plastic above the engine.

The high-riding stance is now accentuated with a Yamaha SR500 tank, a neatly finished new subframe, and a simple but sufficient seat pad. The seat is actually long enough to accommodate a passenger on short trips, so the passenger footpegs remain. 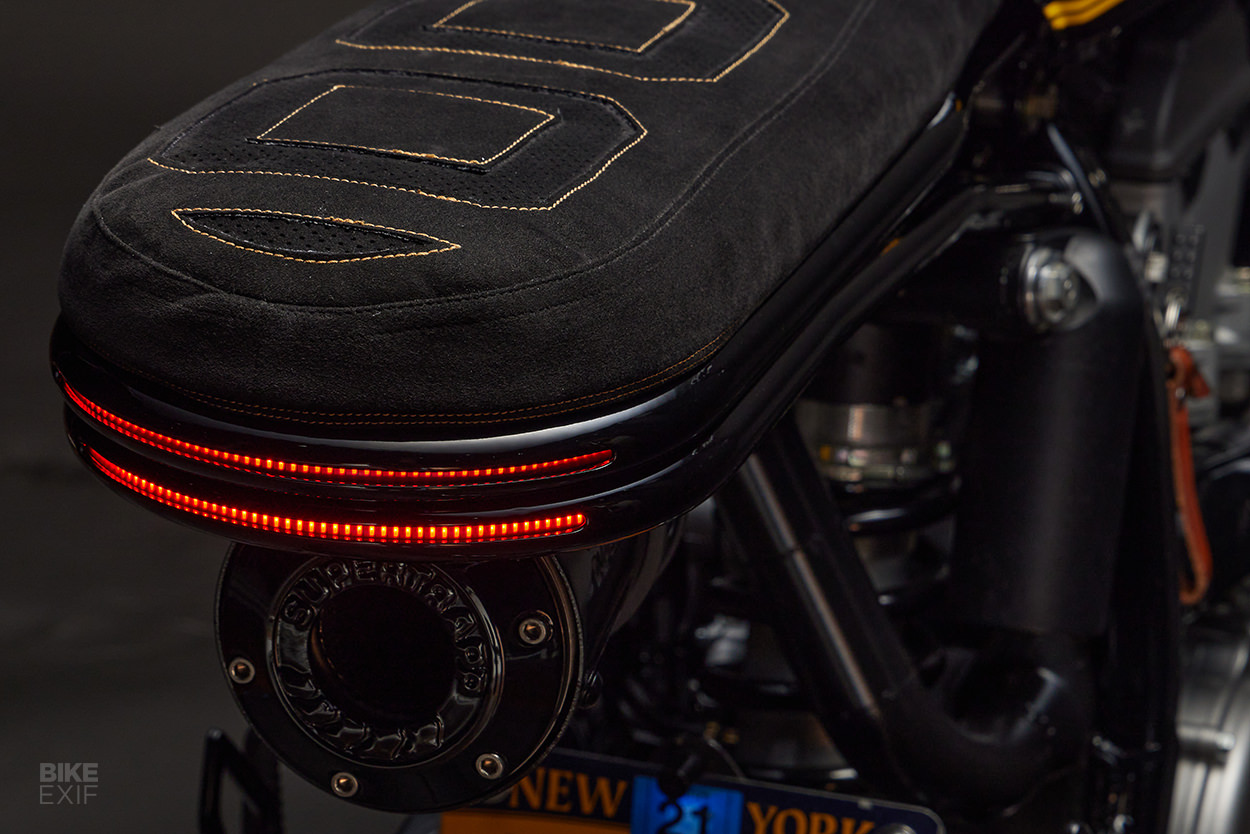 The twin-tube subframe design is a slick piece of moto architecture, and works beautifully. It should also reduce the wet weight even further from the impressive 322 pounds (146 kg) of the stock bike. At the back is a pair of flushed-in LED strips to handle lighting duties.

After fitting the tank, Seba hammered in the front a little to increase steering lock, and replaced the filler assembly with a Triumph Thruxton unit. To match the tank era, Seba also installed a Honda ST70 Dax minibike front fender—with adjustable height and angle brackets, so the fender can be set in different positions. 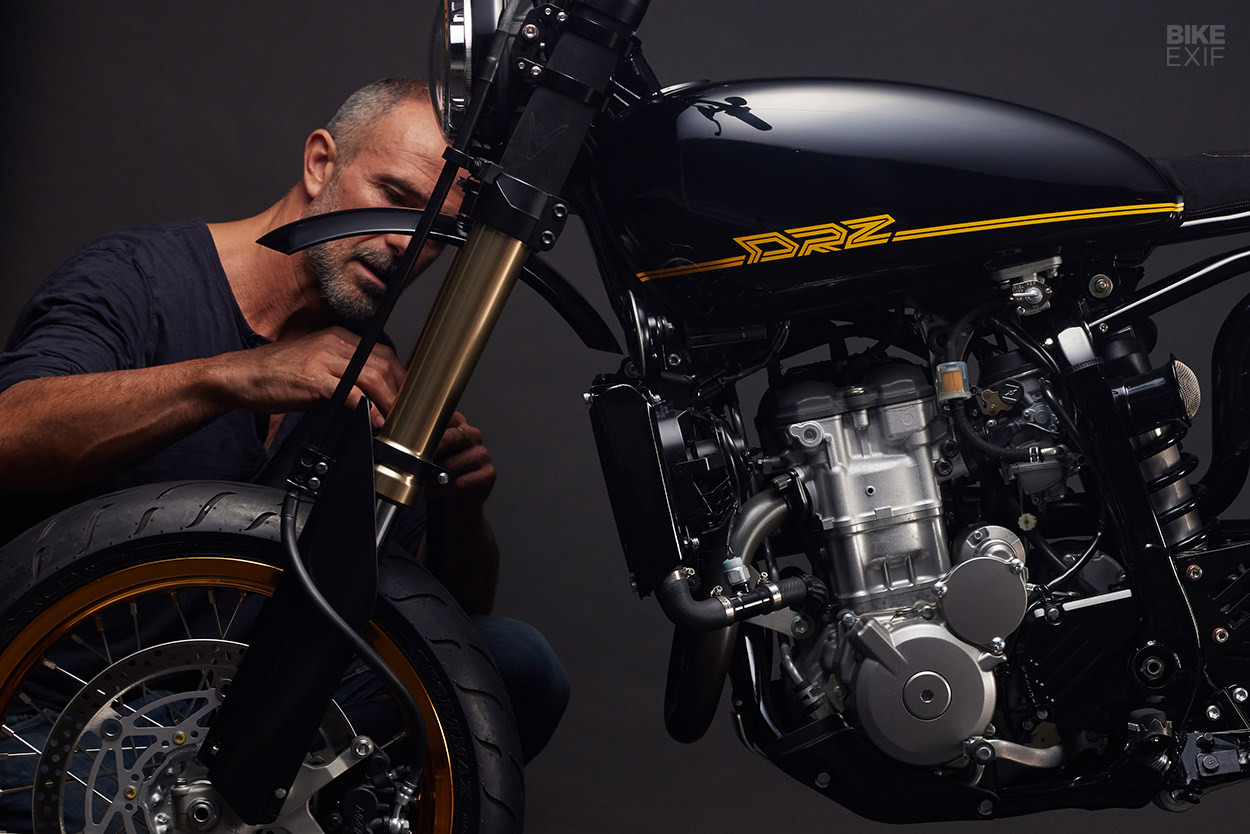 The DR-Z400 runs with two small radiators rather than one big unit, and these clashed with the simple, clean design that Seba had in mind. After a long search, he selected a single CBR500 single radiator to cool off the DRZ in hot New York City summers. To run the same fan and sensors, Seba used custom-made sensor sockets and brackets.

An even bigger challenge was setting up a custom wiring loom, and designing a tray underneath the tank to hold a Motogadget m.unit, the CDI box, an Antigravity battery, and most of the electronic components. “There is not much room, so every inch was used neatly,” says Seba. 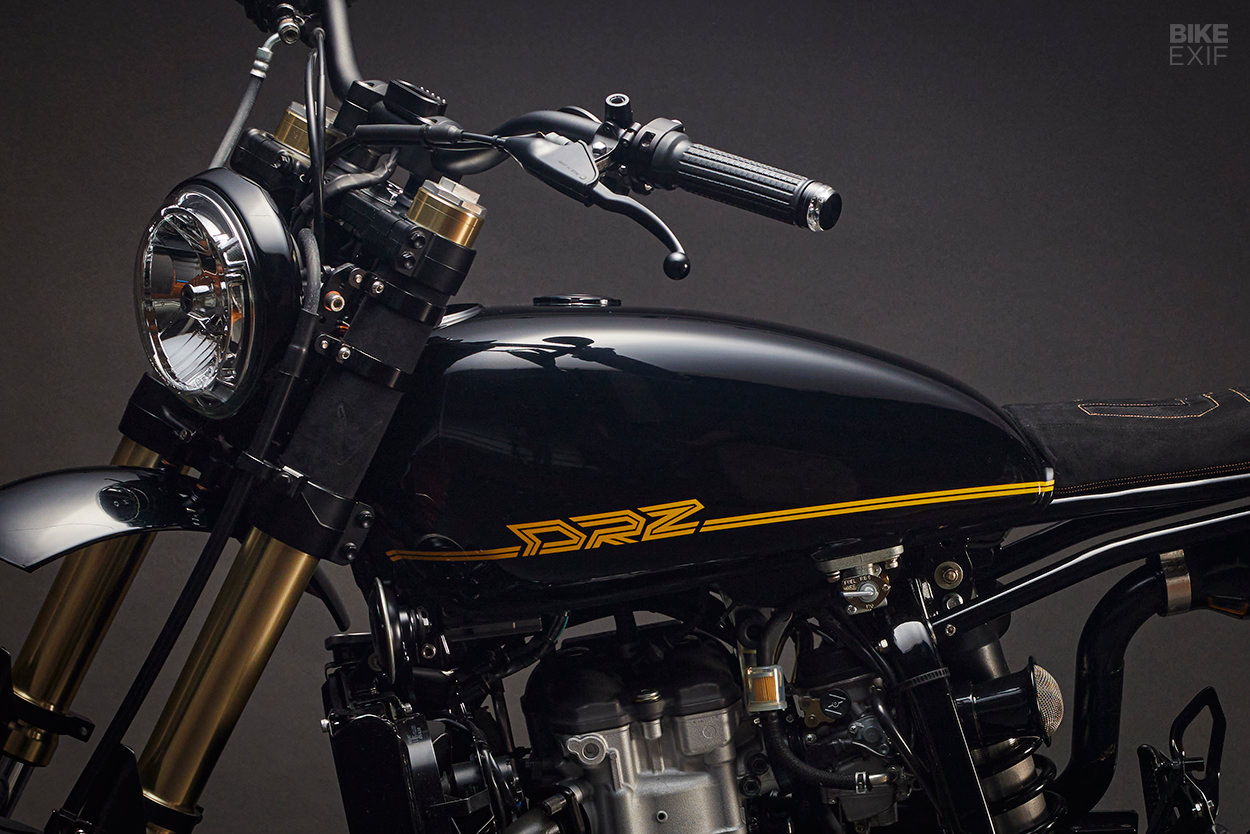 At the moment all the parts were taken off, to send to powder-coating and paint, Seba had to rush to a hospital emergency room—where a tumor was discovered. “It was scary, but I’m a very lucky man and I’m clean now,” says Seba, who had an operation to get it removed. “But because of that, the bike was in pieces for four months.”

While Seba was recovering, he and his family had to move out of their apartment at short notice. They stayed with friends, and eventually decided to escape the harsh NYC winter and recover in Chile for a month. 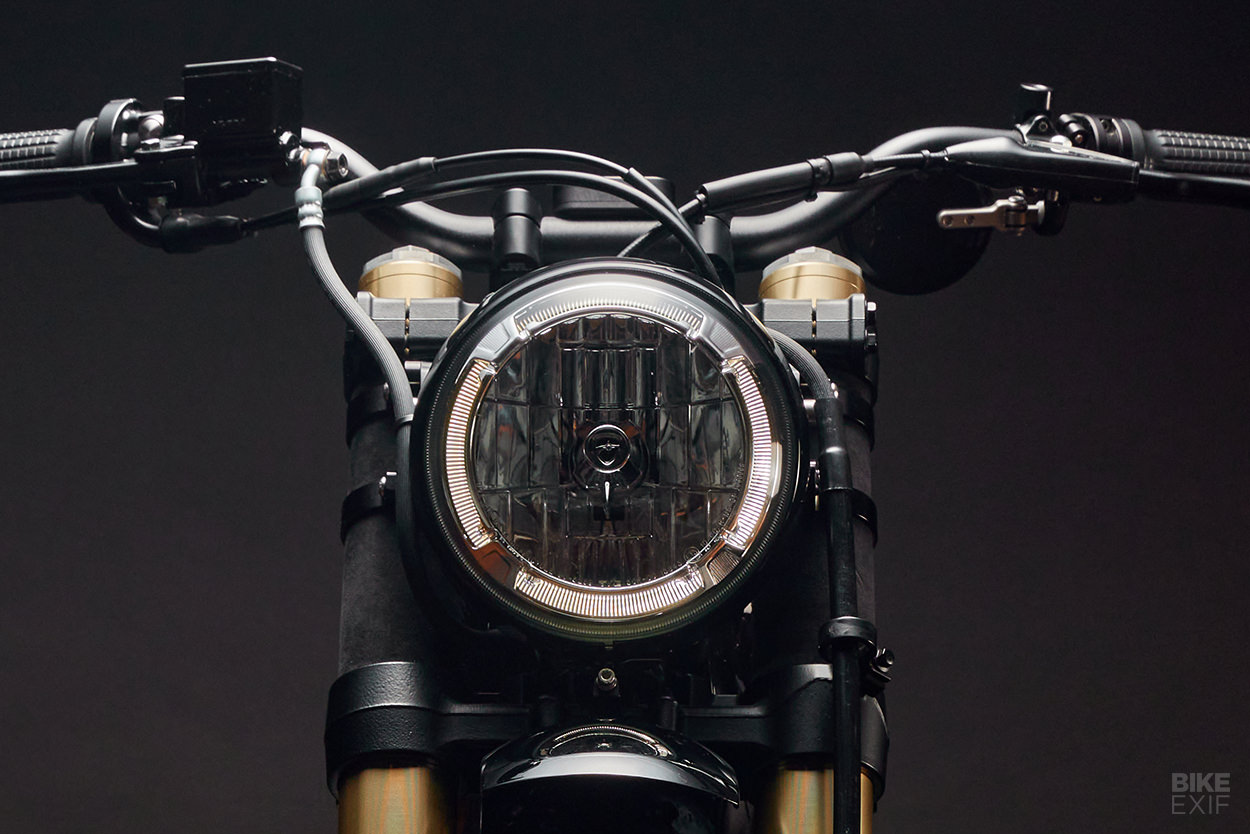 When Seba returned from Chile, he did so alone. Over the next few weeks, he continued fabricating smaller parts and started to reassemble the Suzuki. At Jorge’s suggestion, he fitted a Scrambler Ducati headlight, and started sourcing a speedo and switchgear. 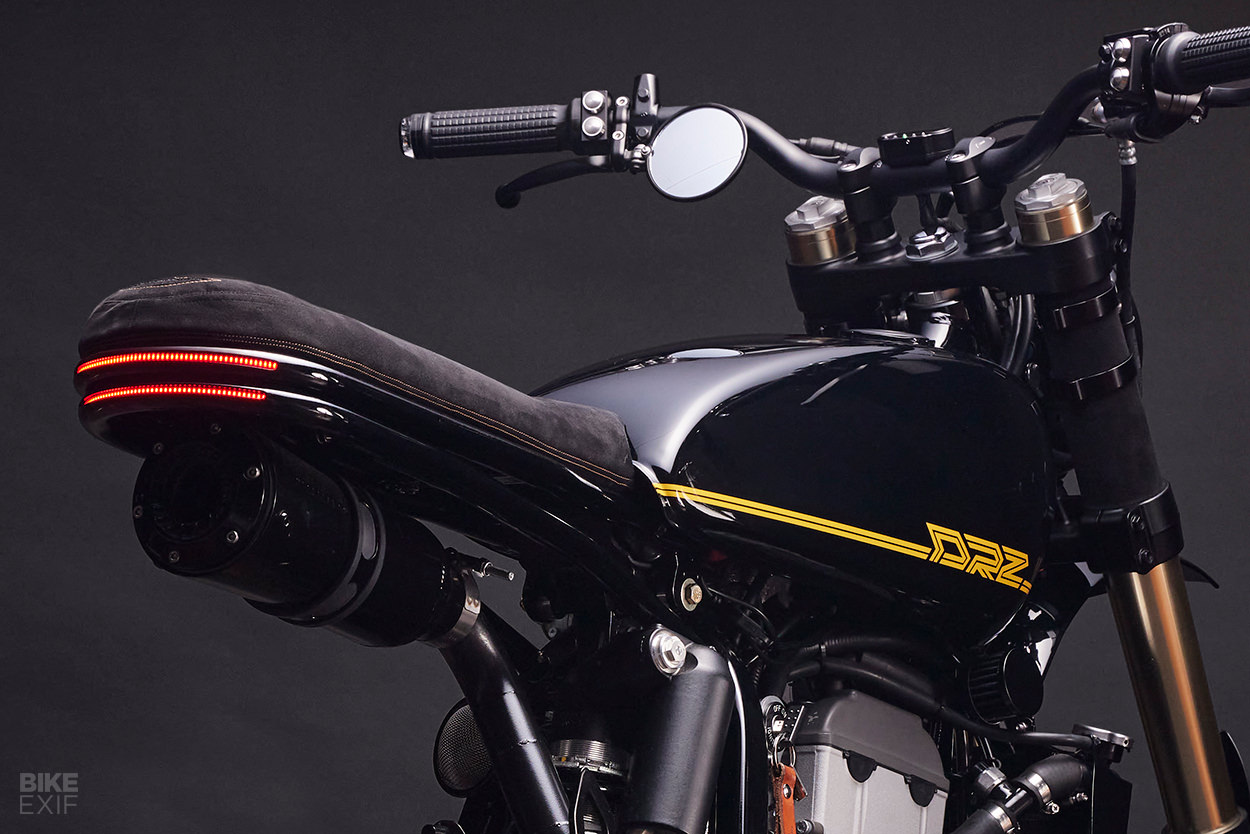 To give the liquid-cooled four stoke motor a fillip, Seba has fitted custom-made headers and a Supertrapp muffler. He’s also rejetted the Mikuni carburetor to make the most of the easier breathing.

Details are all-important on a build like this, and Seba has drilled down to the smallest elements. Like the seat upholstery: it’s a combination of solid and perforated black Alcantara, with ochre thread for the stitching—including a ‘400’ motif. 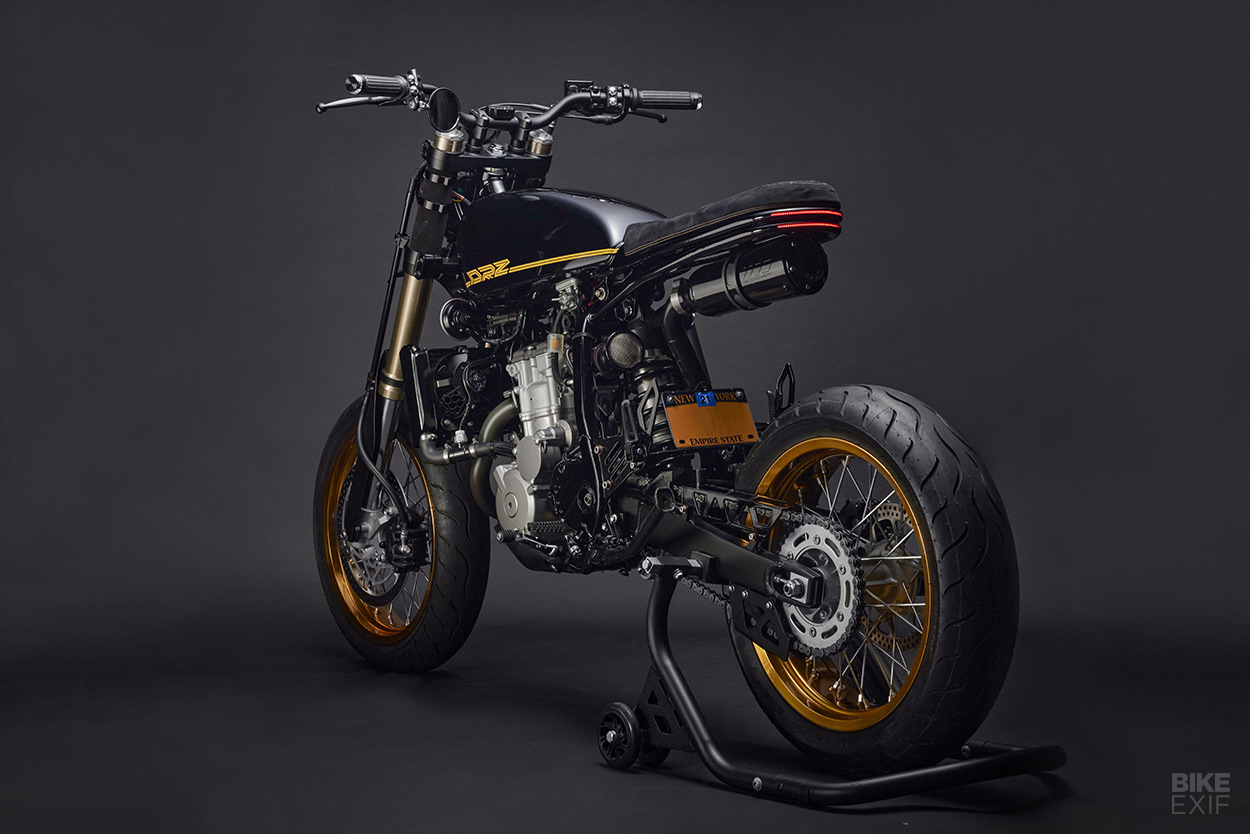 The calipers, triple trees, swing arm, brake levers and other smaller pieces were sent to be powder-coated or anodized in black. The tank, fender and headlight cover went to master painter Robbie Nigl at Peach Pit Painting, for a similarly dark finish.

The Man In Black would approve, we think. 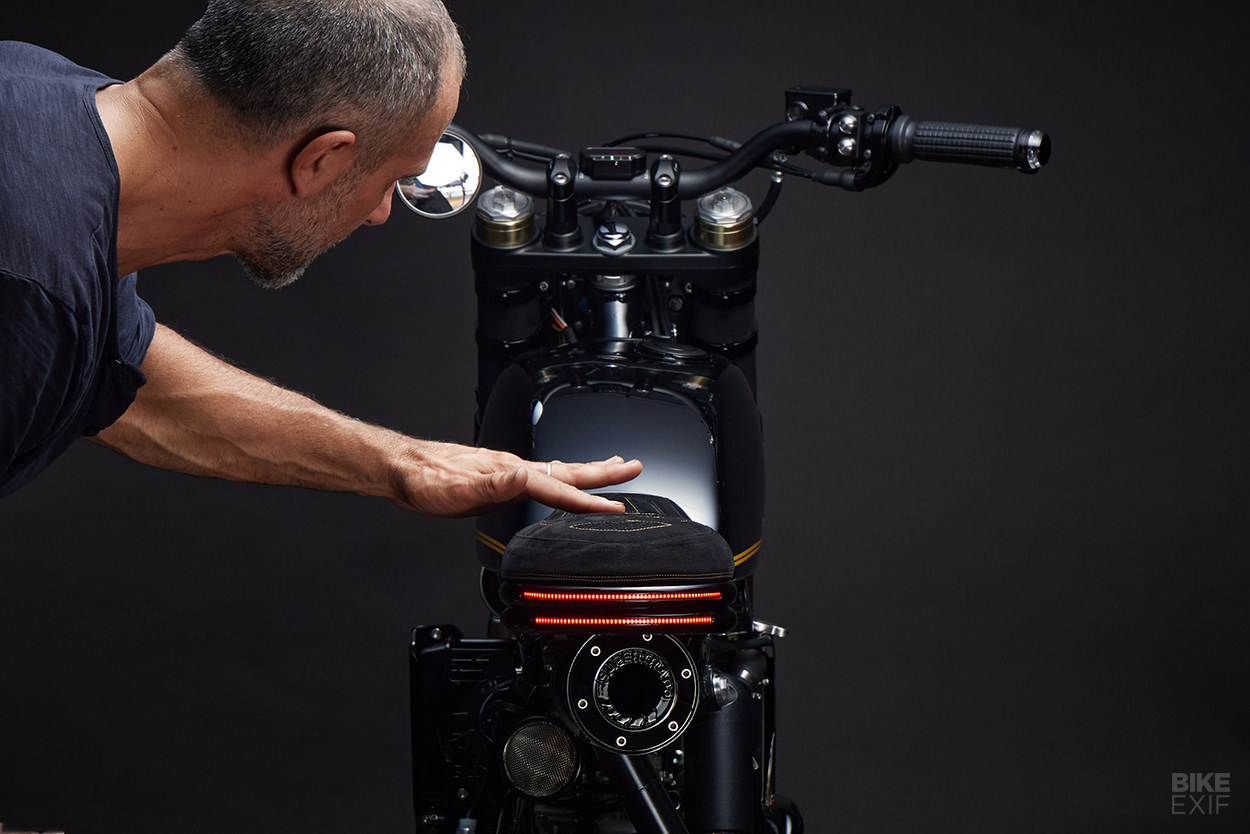