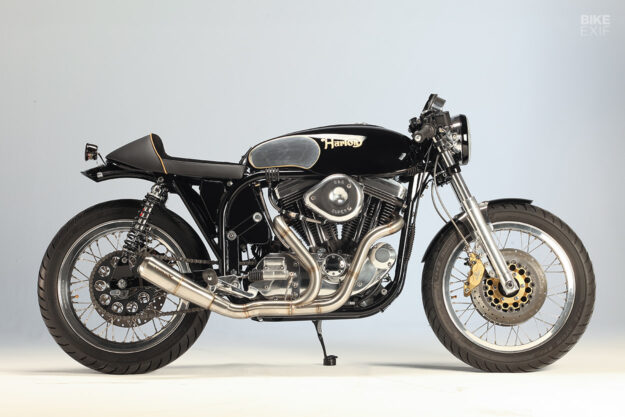 Building the perfect custom bike is a lot like the science of baking. You’re combining ingredients in the correct ratios to produce something special—and if you get those ratios wrong, your recipe flops. Judging by this ‘Harton’ café racer, Stile Italiano are master custom motorcycle bakers.

For a small European motorcycle workshop, Stile Italiano has created a disproportionate amount of stunning customs. From their workshop in Roveredo in Piano, in northern Italy, the small team has been pumping out builds steadily since 1999. Rarely taking on commissions, they prefer to build bikes to their own taste and let their work speak for itself. 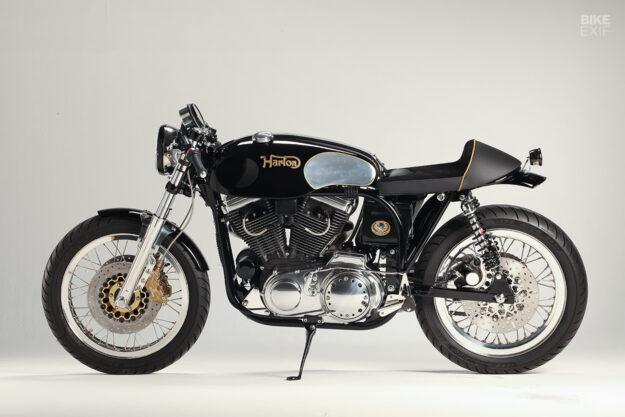 This time, Stile Italiano chose an iconic café racer project: a Harton. Also known as a ‘Norley,’ it follows the same recipe as a ‘Triton‘—a combination of a Triumph engine and a Norton frame—but with a twist. Instead of using a Triumph mill, the Harton’s powered by the V-twin from a Harley-Davidson Sportster. 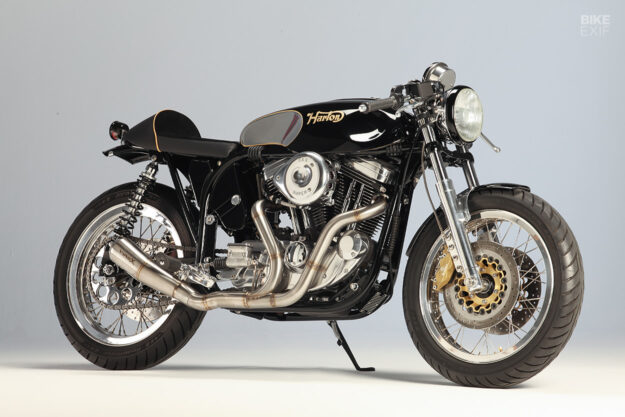 The first hurdle was shoehorning the Sportster engine into place. Once the engine was fully rebuilt and in position, the team fabricated a set of custom engine mounts. An S&S Cycle Super-E carb kit was fitted to squeeze a few extra horses from the Harley engine.

The Sportster also donated its swingarm and rear brake setup, installed alongside a pair of Bitubo shocks to keep the ride plush. The forks are 38 mm Marzocchi units, with custom brackets to hold twin Brembo Series Oro calipers. 18” aluminum Morad rims were laced up and shod with Avon Roadrider tires. 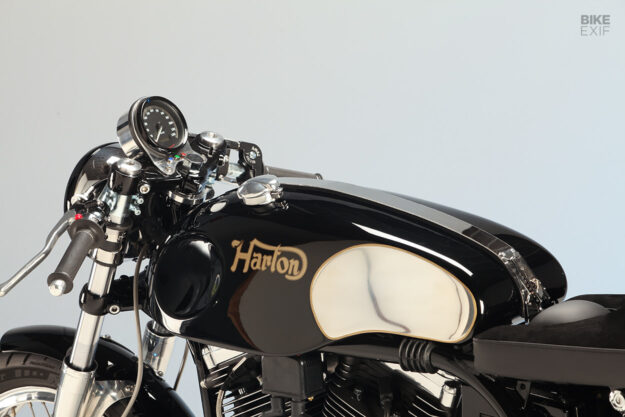 Next, Stile Italiano perfected this already tasty dish the only way they know how: by adding some Italian flair. The vintage-style fuel tank is an aftermarket part, painted in the shop’s signature black, gold and silver colors. Thoughtful touches include an offset fuel cap and a stainless steel belt.

The oil tank was made from scratch, as was the traditional café-style seat. The rear fender only accommodates a small, Vincent-style stop light. But to be honest, if you were riding this, would you really want to stop? 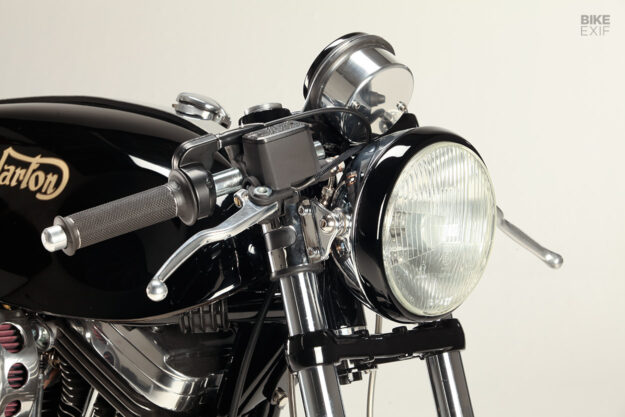 The front fender is aftermarket, modified to fit the Marzocchi forks. Just above it is the headlight from a Moto Guzzi T3, held by Tomaselli brackets. The front end is remarkably simple; a pair of clip-on bars, an Amal throttle assembly and classic-style switchgear.

Stile Italiano repurposed the Sportster’s original speedo, but remounted it in a custom bracket that also houses new warning lights. Lower down, the guys fabricated a set of aluminum brackets to convert the standard footgear to rear-sets. 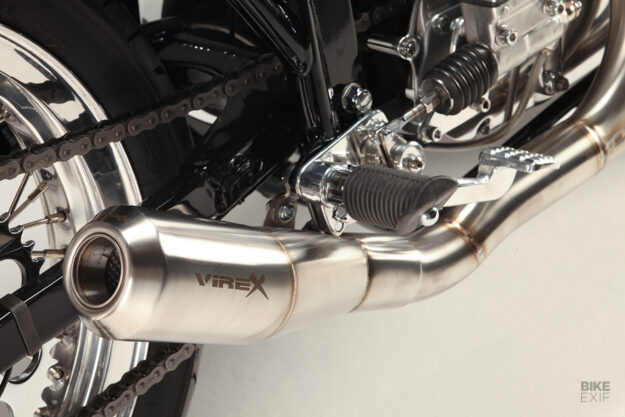 To finish off the build, a two-into-one stainless steel exhaust system was built by Virex to Stile Italiano’s specifications. Flowing down the right side of the bike, it makes the left side look beautifully clean—and exposes stunning details like the engine’s drilled derby cover. Honestly, it’s hard to figure out which side looks best. 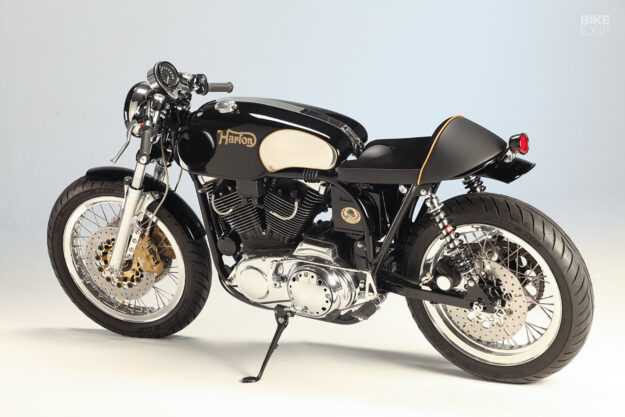 This isn’t the only Harton that Stile Italiano has built. In fact, it’s one of their earlier Harton builds—and every single one is as jaw-dropping as the next.

“Our Team is as eclectic as our taste,” explains Cristian from Stile Italiano. “We’re defined by our people—each one with their own peculiar characteristics, with specific responsibilities and skills, but with a single goal: ‘the bike’ as a lifestyle. Substance, not appearance.” 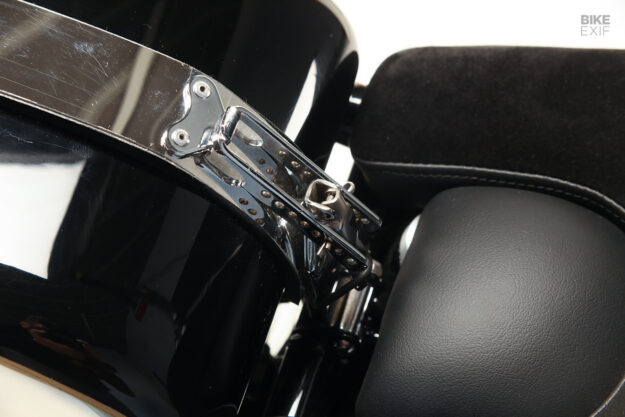 Once again, this small team has proved that they’re among the best in the business. We can’t wait to see what they cook up next. 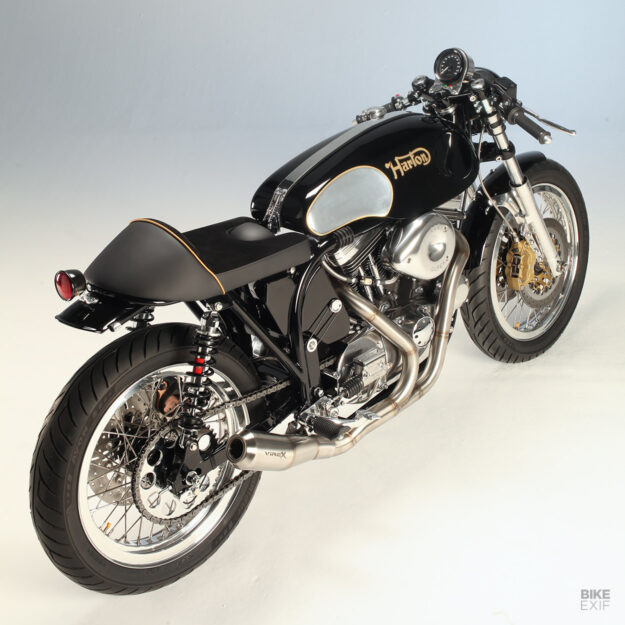