Behind the scenes: Designing the Batman motorcycle 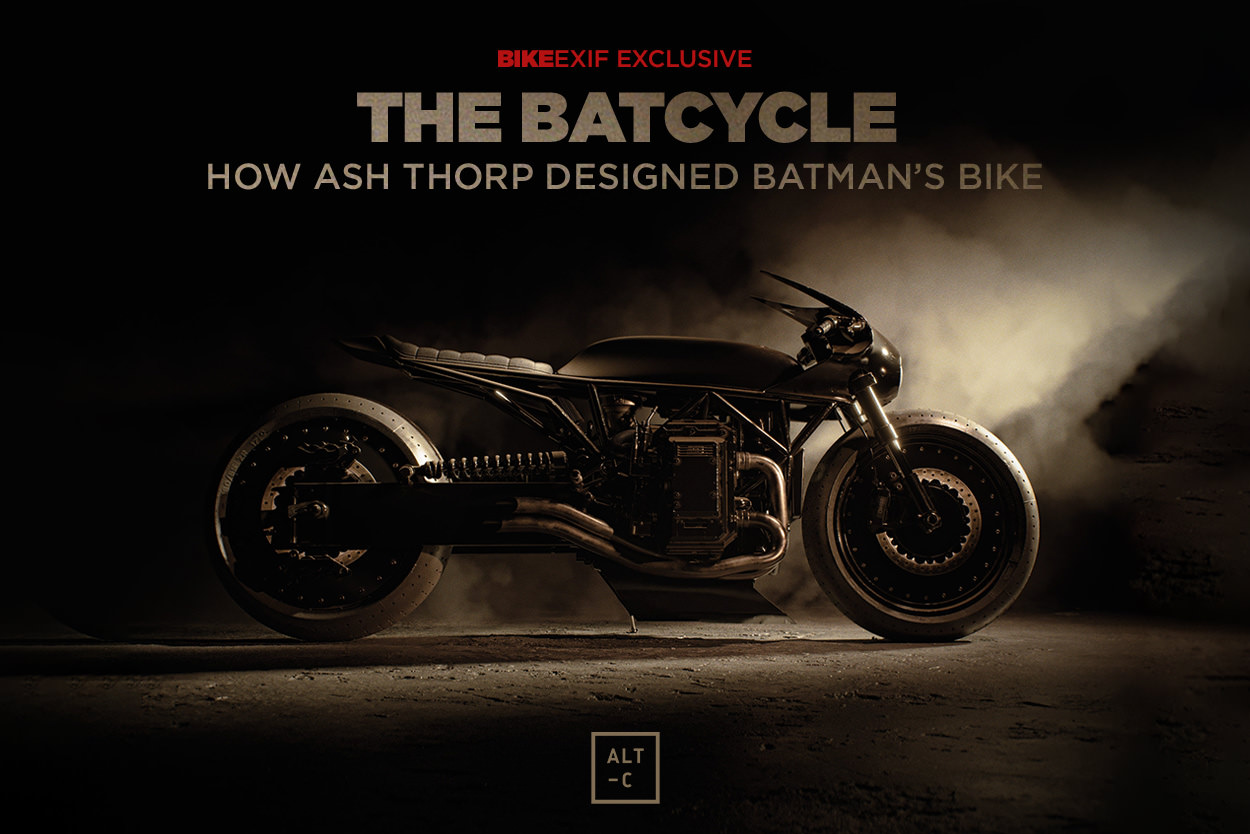 There’s a sense of self-sufficiency that’s deeply ingrained in the Batman mythos. Bruce Wayne has no superpowers—just his intellect, combat skills and gadgets. That, and a Batcave full of fantastical vehicles.

The Batman, directed by Matt Reeves and starring Robert Pattinson, offers a darker and grittier take on the caped crusader than we’ve seen before. The production design is incredible; Gotham feels suitably grim, and the Batmobile is one of the best to ever grace the big screen. Mr. Reeves clearly likes motorcycles too, because this movie has three of ’em. 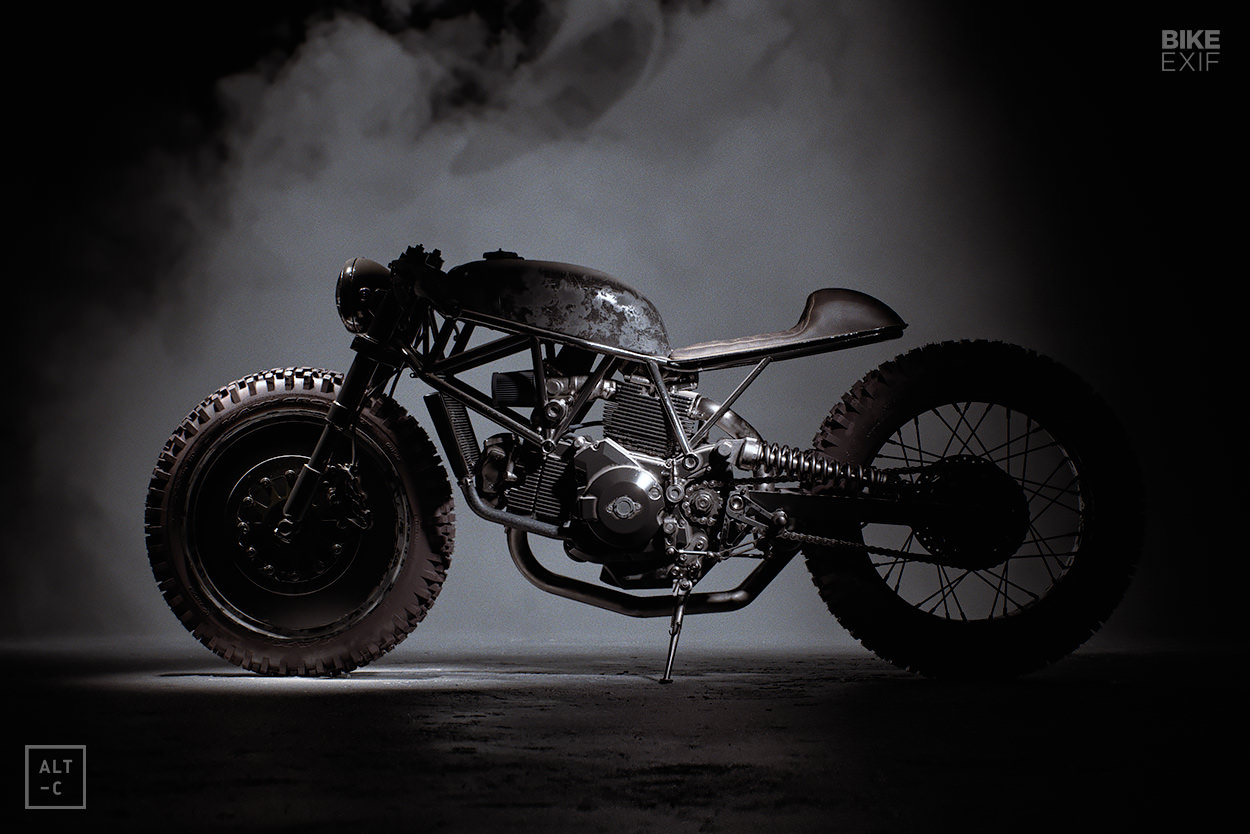 Batman has the Batcycle, Bruce Wayne cruises around on a beat-up café racer [above] when he wants to remain incognito, and Catwoman exclusively travels on two wheels. Her ride is a BMW R nineT that sources tell us was customized by Kaichiroh Kurosu at Cherry’s Company. But the other two, and the Batmobile, were designed by Ash Thorp.

Ash Thorp is a multi-discipline digital artist with a wild imagination. He’s know for the CGI ‘kit-bashing’ automobile customizations that he creates as one half of Make.Haste.Corp., and he’s one of Ken Block’s collaborative vehicle design partners. 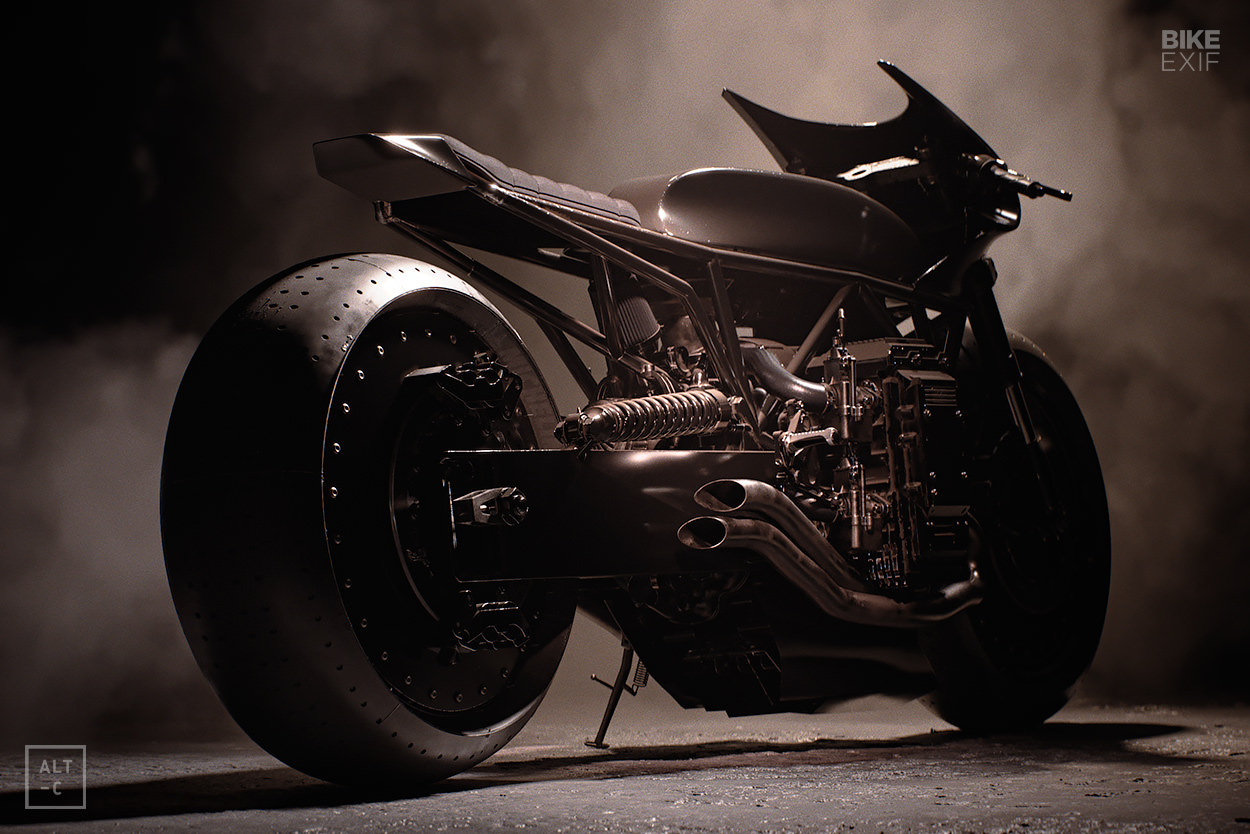 He also worked on various designs for the 2017 film Ghost in the Shell, which inadvertently set him up for this job. Hollywood’s top filmmakers all run in the same circles—so when The Batman’s production designer, James Chinlund, asked Ghost in the Shell’s director, Rupert Sanders, if he knew anyone who could design the new Batmobile, Ash’s name came up.

“James and I had a great first call in which he told me he was working on The Batman as the production designer,” he tells us. “We hit it off and had a great creative alignment from the start” 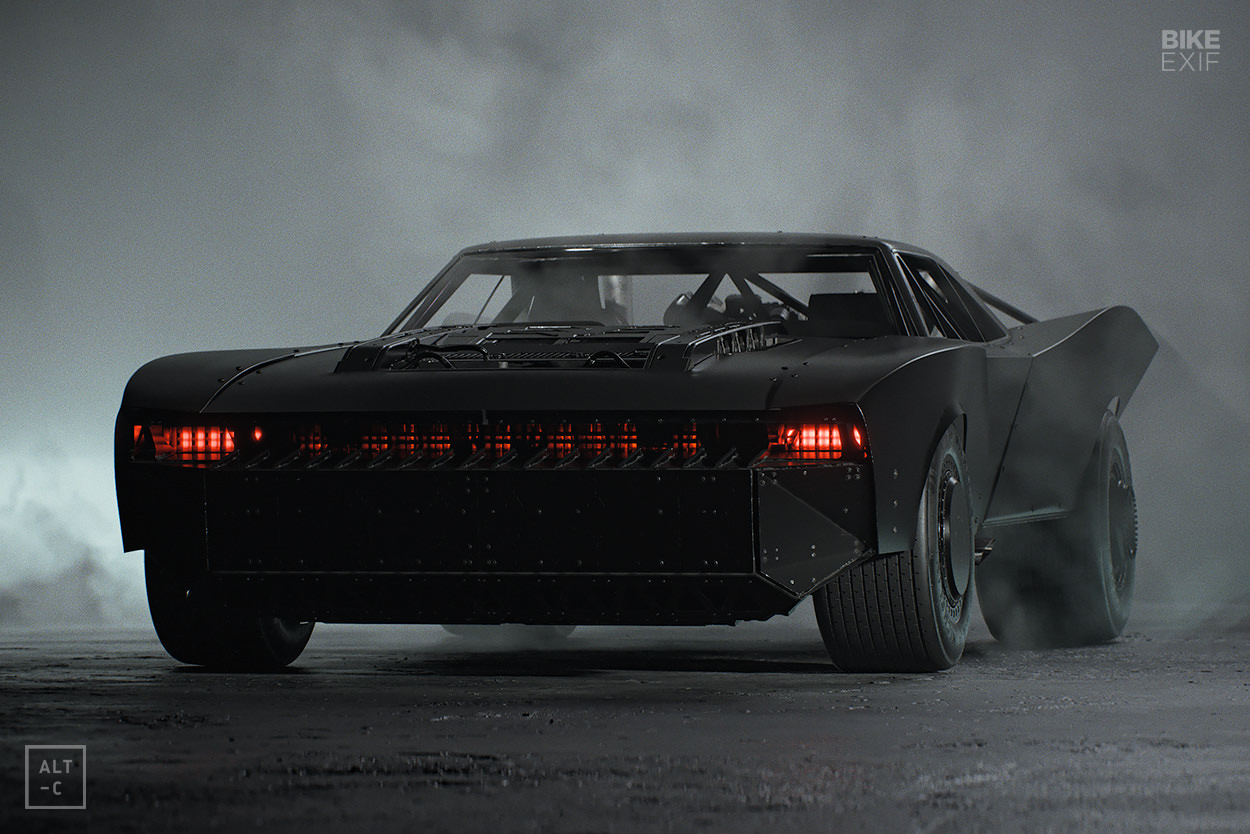 Ash’s first job was to design the Batmobile. “When I visited James at the Warner Brothers lot, he had showed me a couple of key inspirations. He told me briefly: ‘Okay, this is a real world Batman. He builds it himself. It’s got to have culture of Americana muscle car, raw, real, and you have to viscerally feel it.’”

It took about two months for Ash to nail down the preliminary Batmobile design. Heavily influenced by American muscle cars, and with a giant turbine poking out the back, it’s equal parts DIY and bonkers. And its first appearance in the film is truly a goosebumps moment. 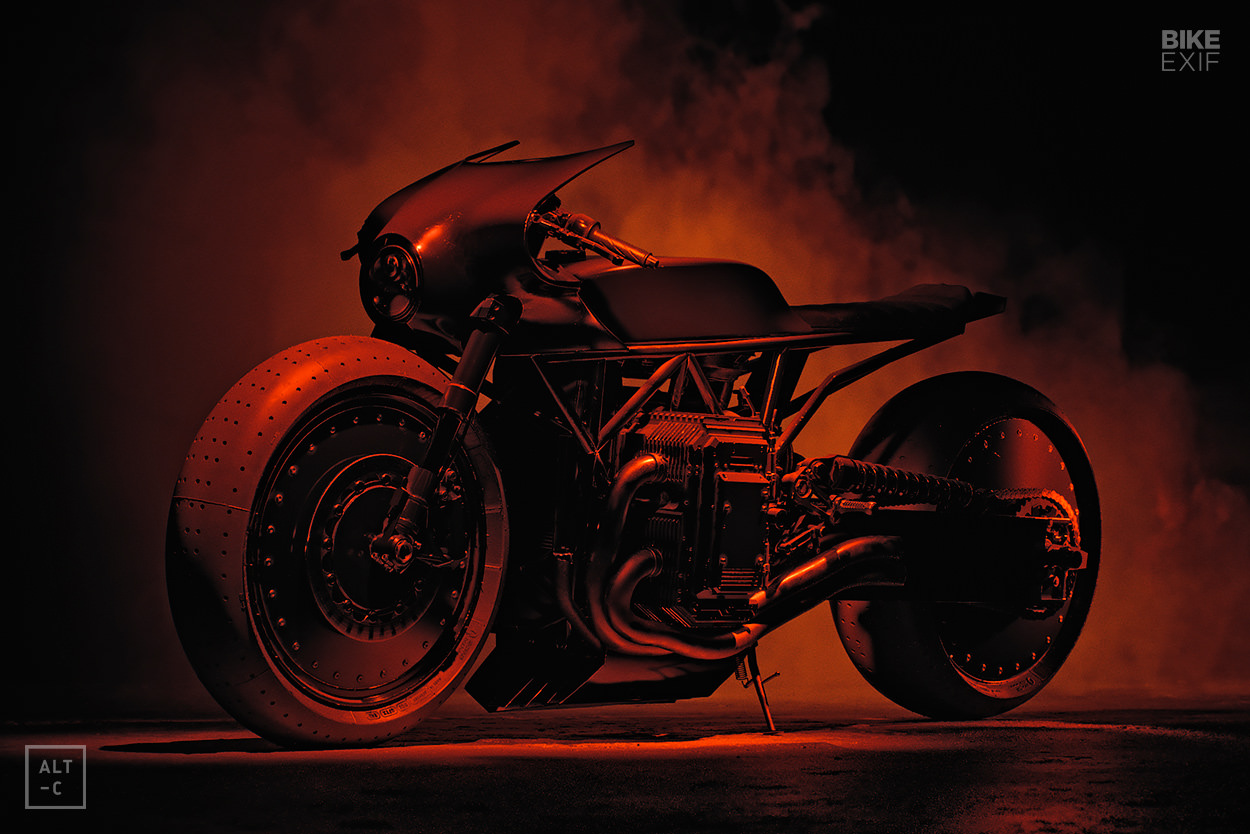 With that out of the way, it was onto the motorcycle designs—a subject matter Ash is a little less familiar with. “To be completely honest, I love motorcycles,” he says. “I love the look of them. But I have a problem with speed—therefore, my wife will never let me have a motorcycle.”

Ash was familiar with the custom scene though, and a big fan of Radical Ducati specifically. From his perspective, customizers like Radical were doing with physical bikes what he’d been doing with cars digitally for years; taking them apart, mixing and matching parts and putting them back together. So he bought a bunch of stock 3D files of motorcycles, and got to work designing the Batcycle. 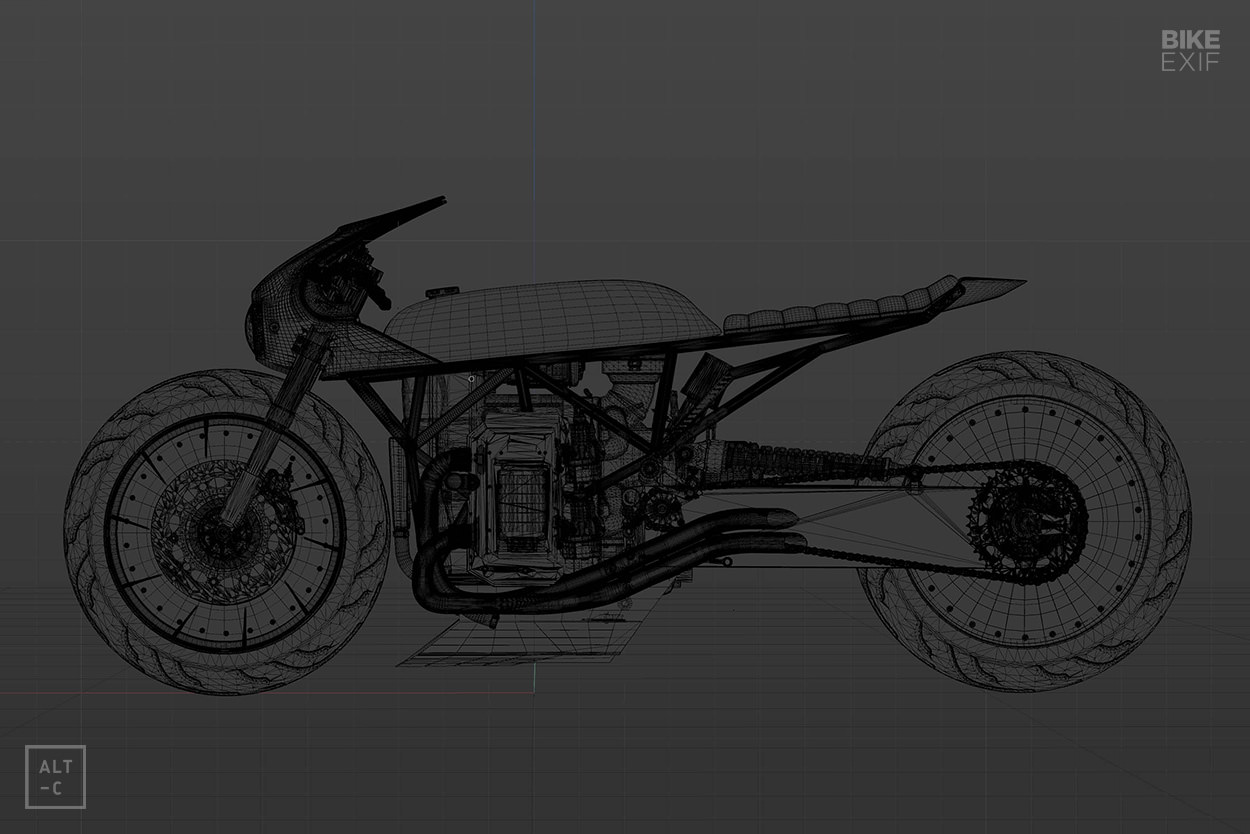 “I treated the process as if I was really him and really doing it,” he explains. “And I was like, ‘okay, well, I’ll take that piece from that, I’ll take that from there, and I’ll take this from there. Okay, I’m missing these things—I’ll just build and fabricate that. I’ll put that there. Okay, these wheels would go there. It’s getting closer. Does this feel like something that people would be afraid of? Does it look fast? Does it look scary? Okay, cool. Let’s keep adding to it.’”

“I kept approaching it as if I was a crime fighter living my best false life as Bruce Wayne. Even with the car, I think I treated it the same.” 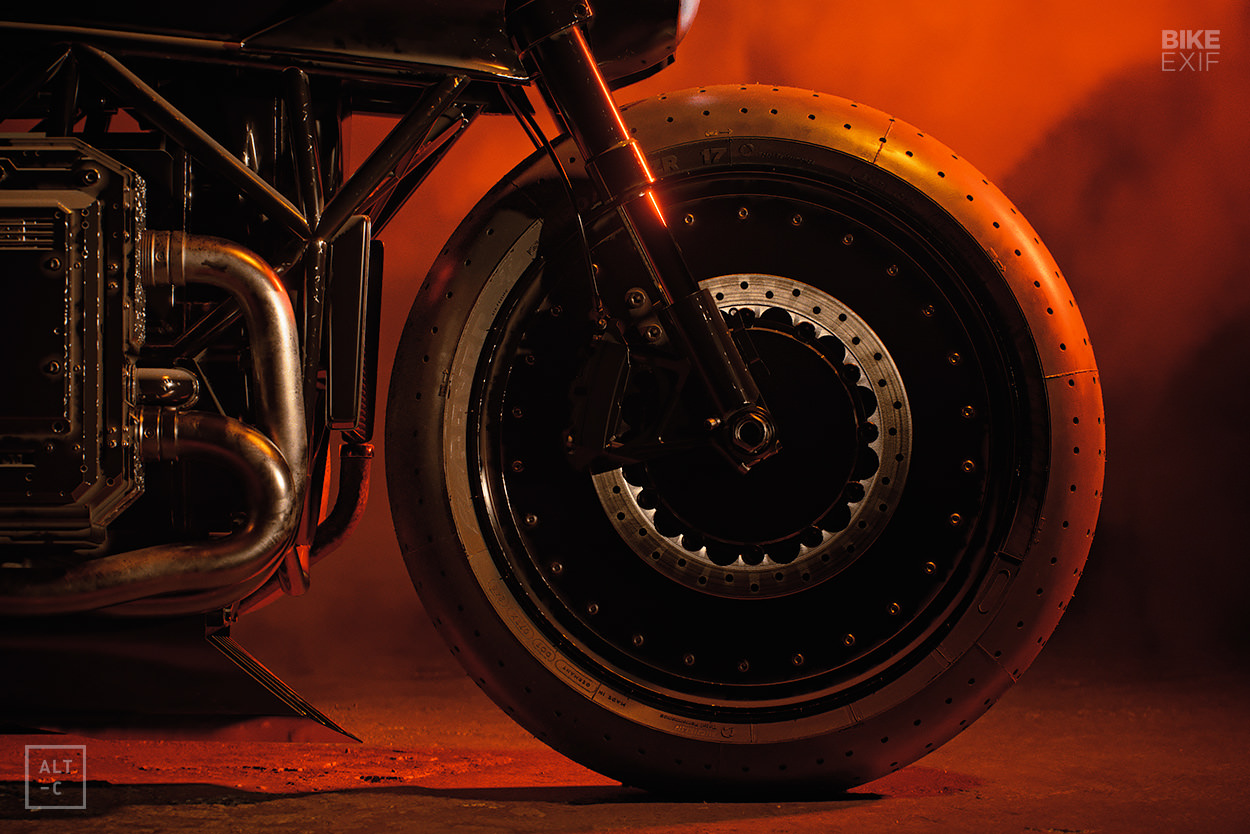 Influenced by the Ducati Monster, Ash sculpted his creation around an exposed trellis frame. He pulled the front cowl and forks from a Ducati (he can’t remember exactly which model), then created his own brakes and wheels. The tank, seat and tail were all modeled from scratch.

For the engine, Ash decided that since this was a movie, he could break the rules a little. (After all, a Batcycle deserves at least some fantasy elements.) So he decided to exaggerate the motor and wheelbase. 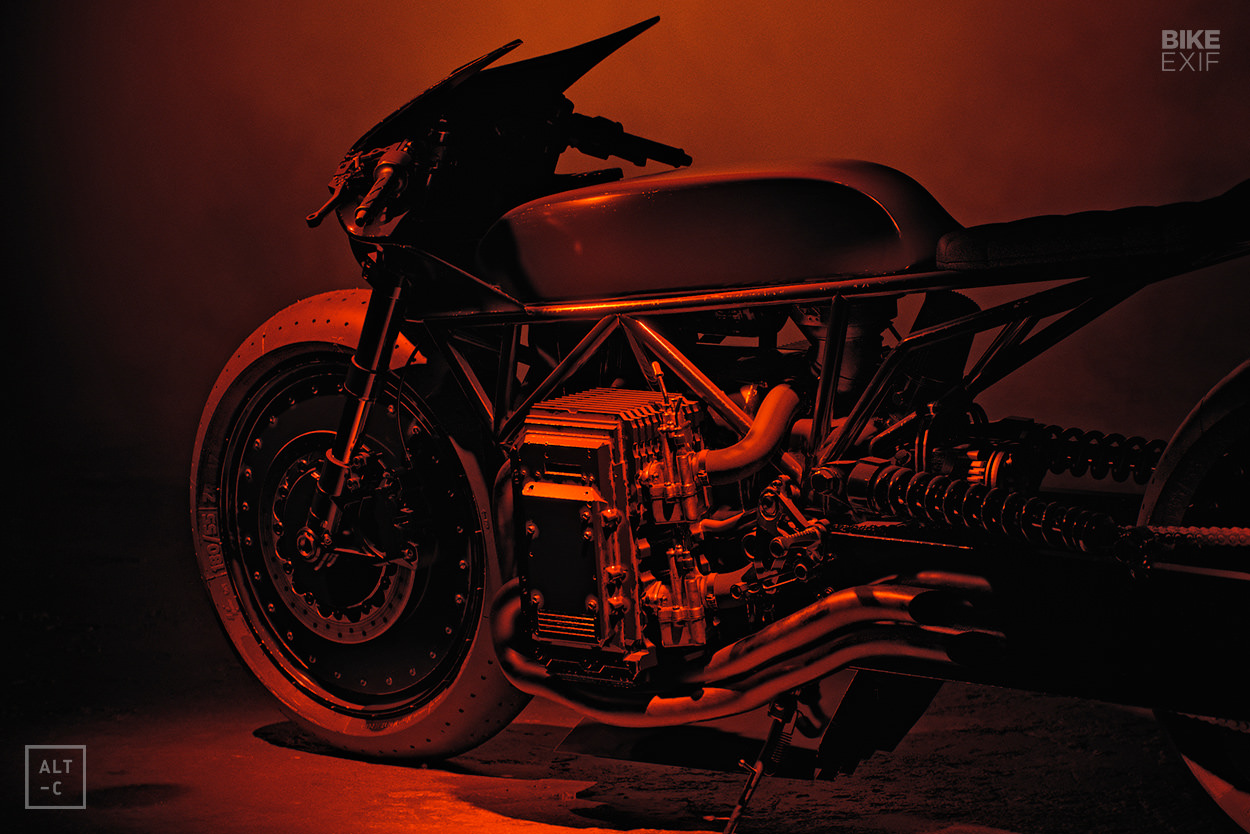 The engine is actually two BMW boxer motors, deconstructed and stacked on top of each other. Pulling inspiration from the Suzuki Hayabusa, Ash stretched the swingarm and added a gargantuan tire at the back. He explains that he wanted the bike to look like it was built for high speed pursuits, but admits that it might not be the most maneuverable machine.

“You can see my lack of motorcycle knowledge in the overall design of things. Like the swingarm in the rear, it doesn’t make sense geometry-wise. And I’m sure I’ll get ripped a new one by super bike nerds which is totally fine. I deserve it—I’m just an art guy.” 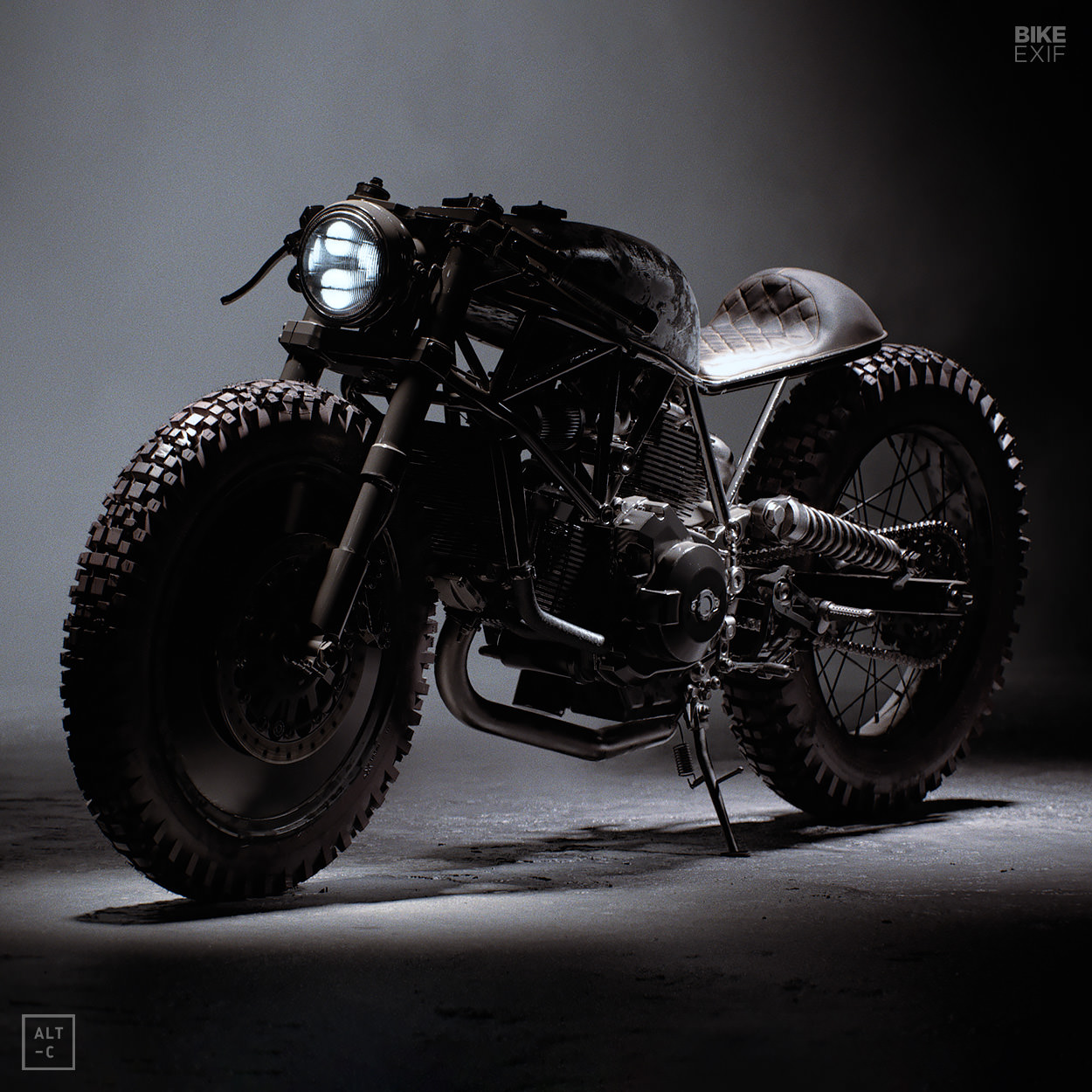 Once Batman’s bike was signed off, it was time to move onto Bruce Wayne’s two-wheeled whip. There are parts of the movie where he moves around the city out of ‘uniform,’ but undercover, and for that he chooses two wheels.

Ash pitched the idea of a low-key, beat-up café racer, that still looked like it would be fast enough to catch bad guys. “And also, it was the DNA of what he would build if he were to build the next version of it, which is the Batcycle,” he adds. 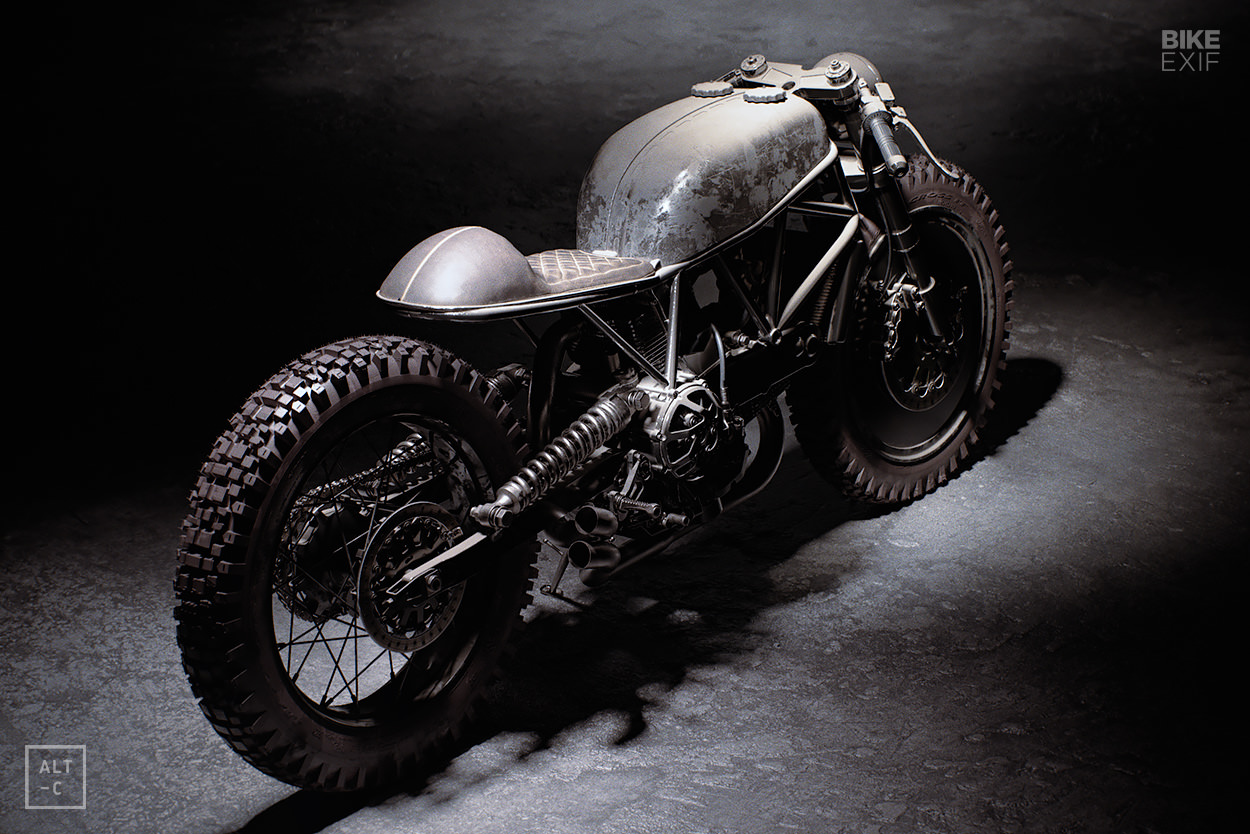 With a trellis frame and an L-twin engine, there’s more than just a little Ducati Monster DNA in Ash’s ‘Drifter’ bike design. And looking at the renders, it’s clear that Ash is master of nailing photo-realistic textures in the digital space.

Once the renders were done, Ash handed them to the production team and took his hands off the wheel. In the end, the Drifter bike was built using what seems to be a mid-sized four-cylinder Honda CB. The general vibe remained, but the actual bike in the movie has more of a real world feel to it. 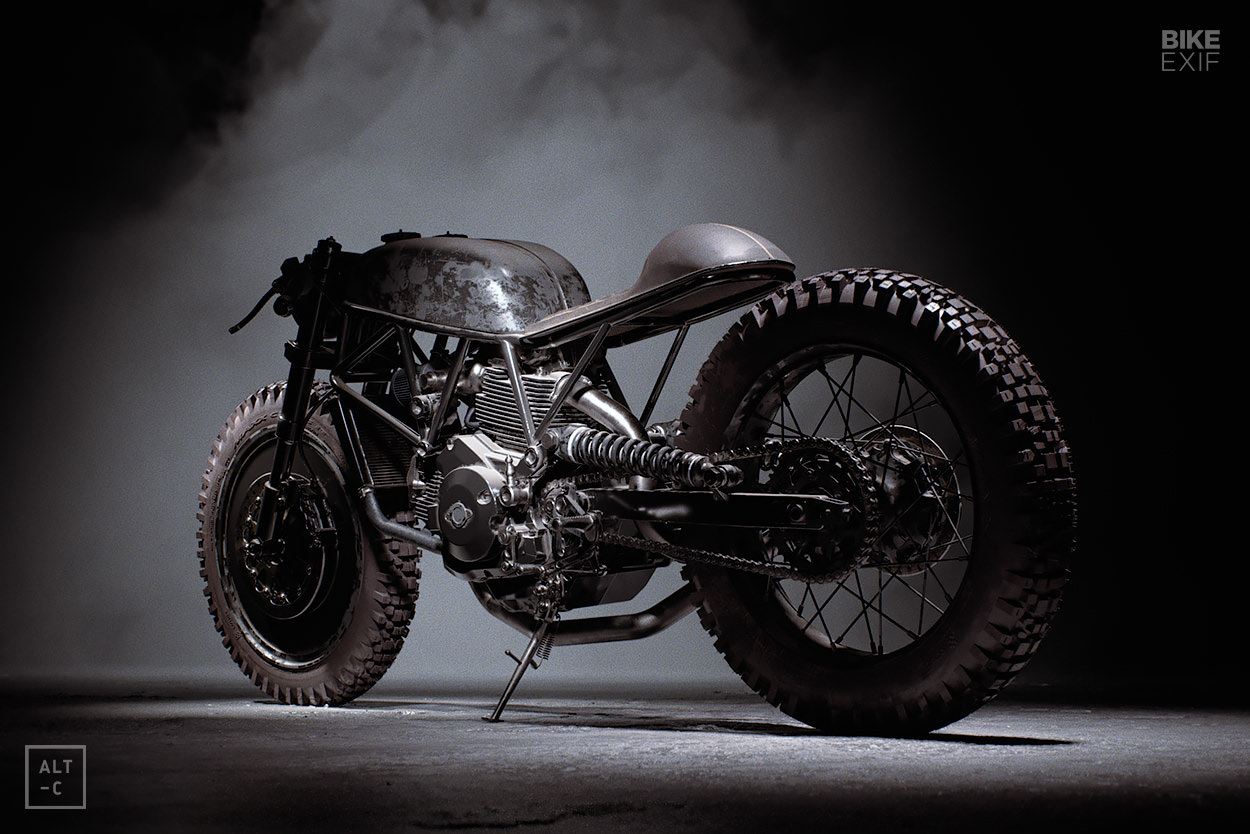 The Batcycle translated more accurately to the screen, which couldn’t have been an easy task. Rumor has it that the production team sculpted it on top of an electric motorcycle, leaving them free to execute the fantasy elements without making them work in a practical sense. (It’s a common Hollywood practice.)

“It’s a huge leap going from a digital design,” says Ash. “My goal with my renders is to make them look and feel as real as possible, but it’s not a production-ready execution really, because you have to do everything to scale, and you have to pass everything over to draftspeople and a production team, and people that take the design and then translate it to a reality, which is a whole other thing.” 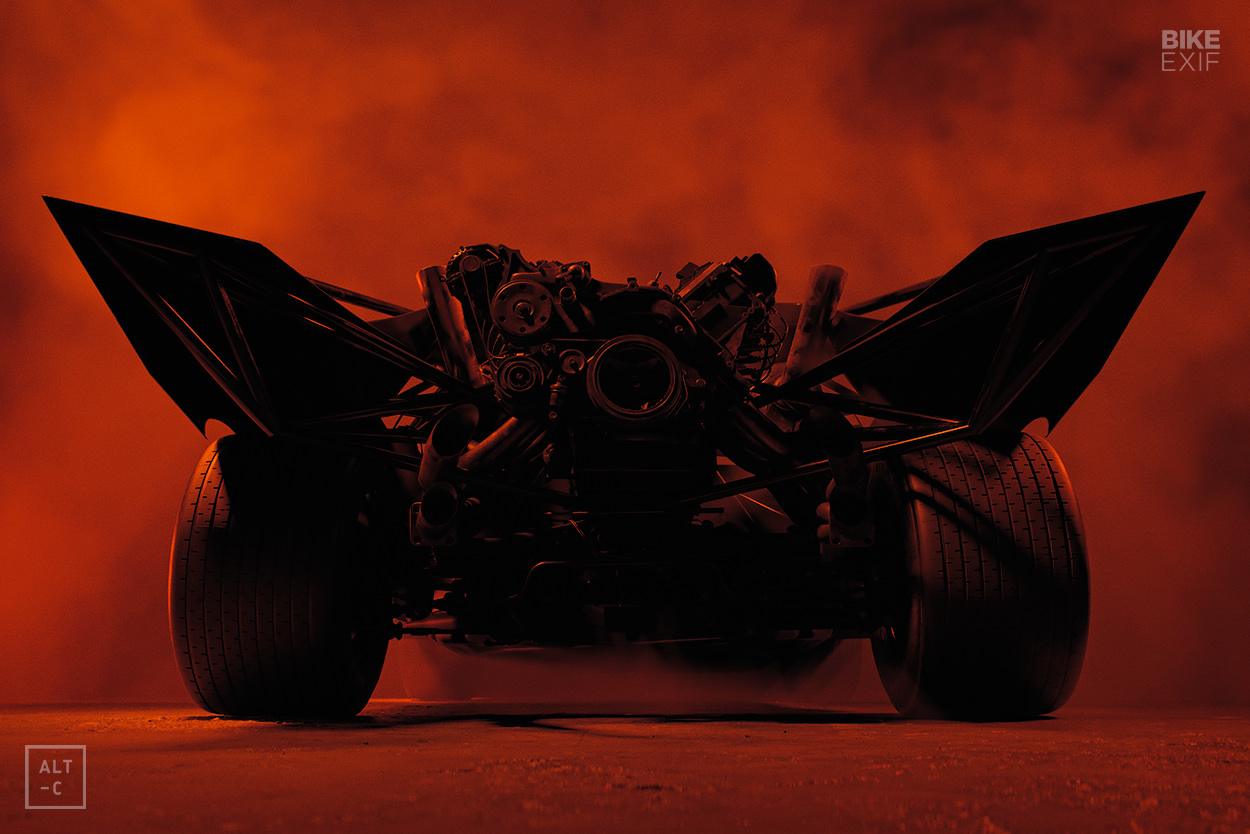 “It’s always tough to let go of your design but James, Matt and the team of amazing talent just did such an incredible job on the entire production.”

“Sitting in a theater and watching it, I was overwhelmed. I thought ‘wow, I’m finally a part of something that I very much connect with on a tonal and taste spectrum through and through.’”

Ash Thorp | Instagram | With thanks to Adam Fitzgerald / Iron & Air