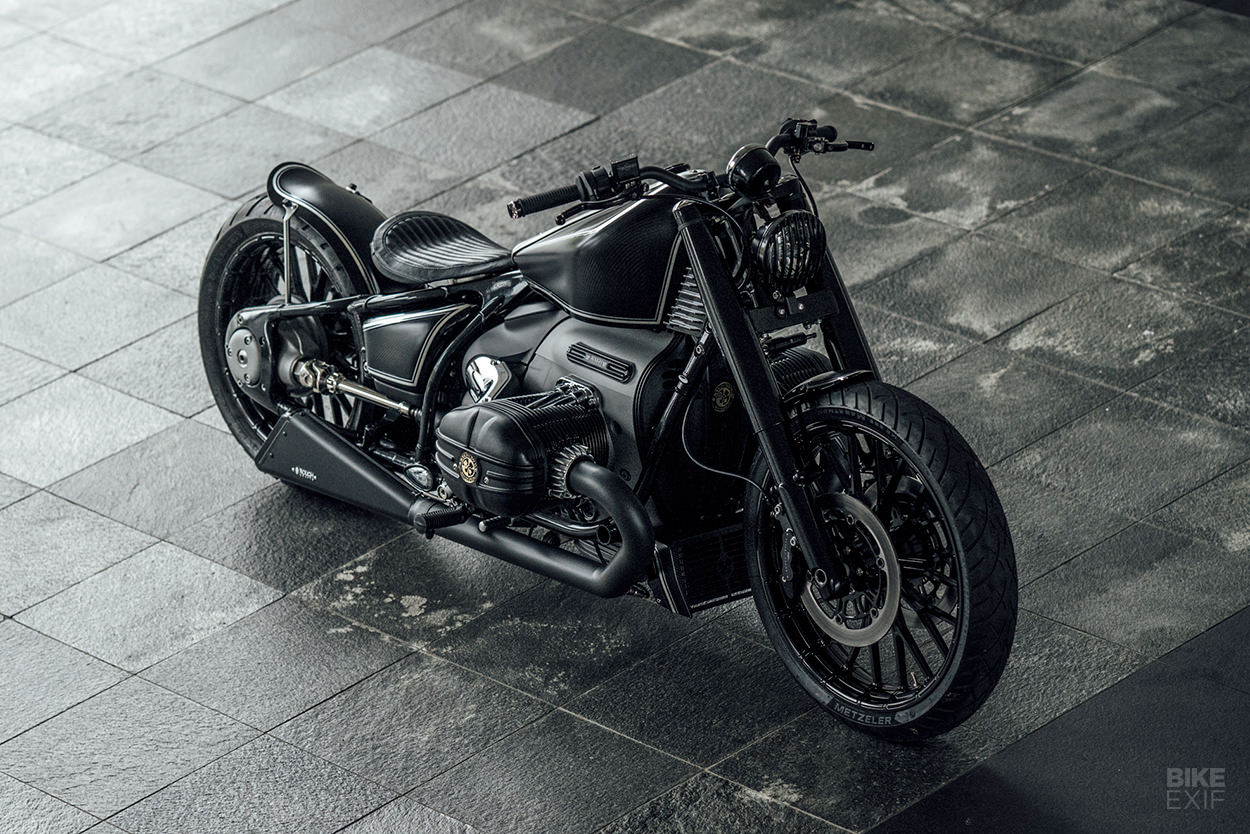 It’s been over eighteen months since BMW launched the mighty R18. And if you count the teaser campaign, the biggest-ever boxer has been kicking around since the middle of 2019, when the concept was revealed at Villa d’Este on the shores of Lake Como.

The BMW ‘Soul Fuel’ program has seen R18s delivered to several top custom shops, with interesting results. But all along we’ve wondered: “What would Winston Yeh do?” And now we have the answer, with the imposing ‘Berlin Barnstormer’ from Rough Crafts. 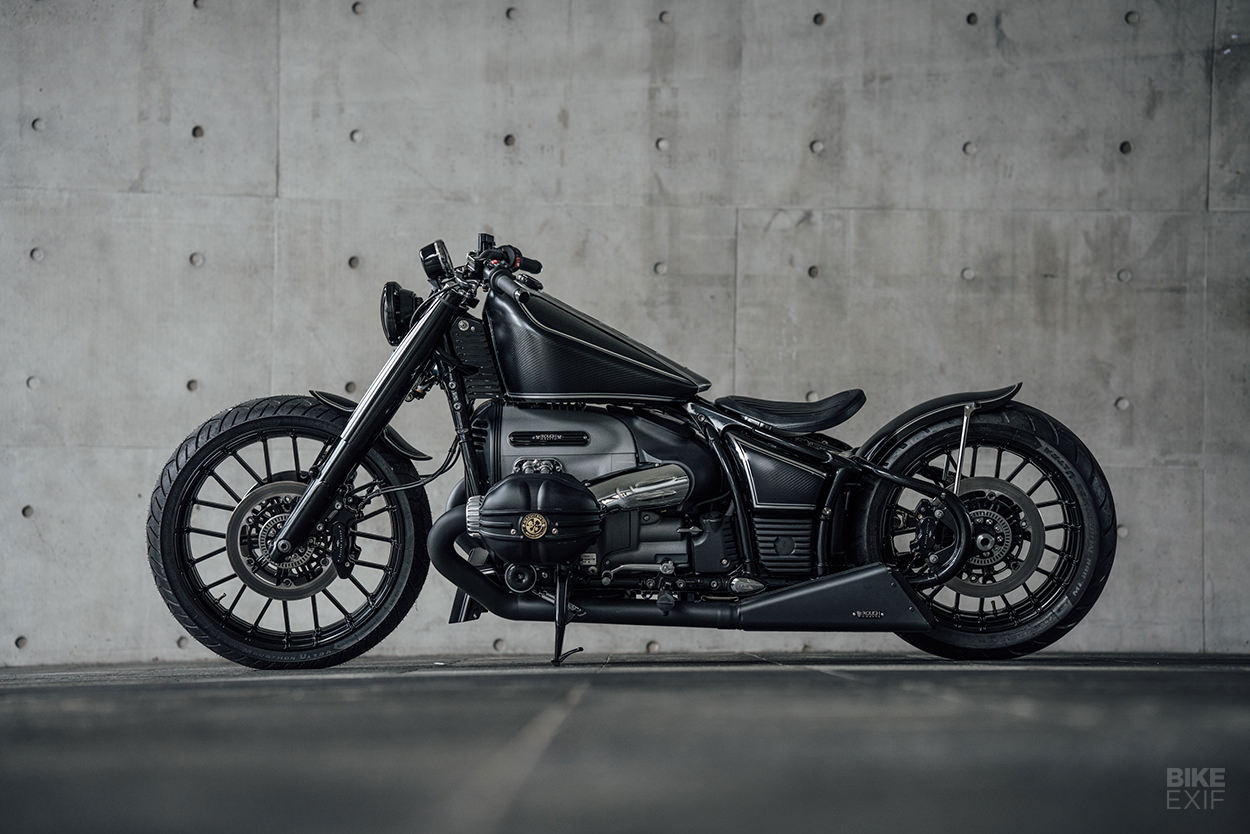 BMW didn’t wire a stack of euros over to Taipei to commission this build though. That fell to a private client. “He was one of the first to pre-order the R18 in Taiwan,” Winston reveals. “After delivery, he took a ride around the island and then gave it to me—and pretty much let me do whatever I want.”

This finished bike has Rough Crafts signatures all over it, from the blacked-out finishes to the muscular stance. But unlike most of Winston’s builds, it also taps into a rich vein of history. 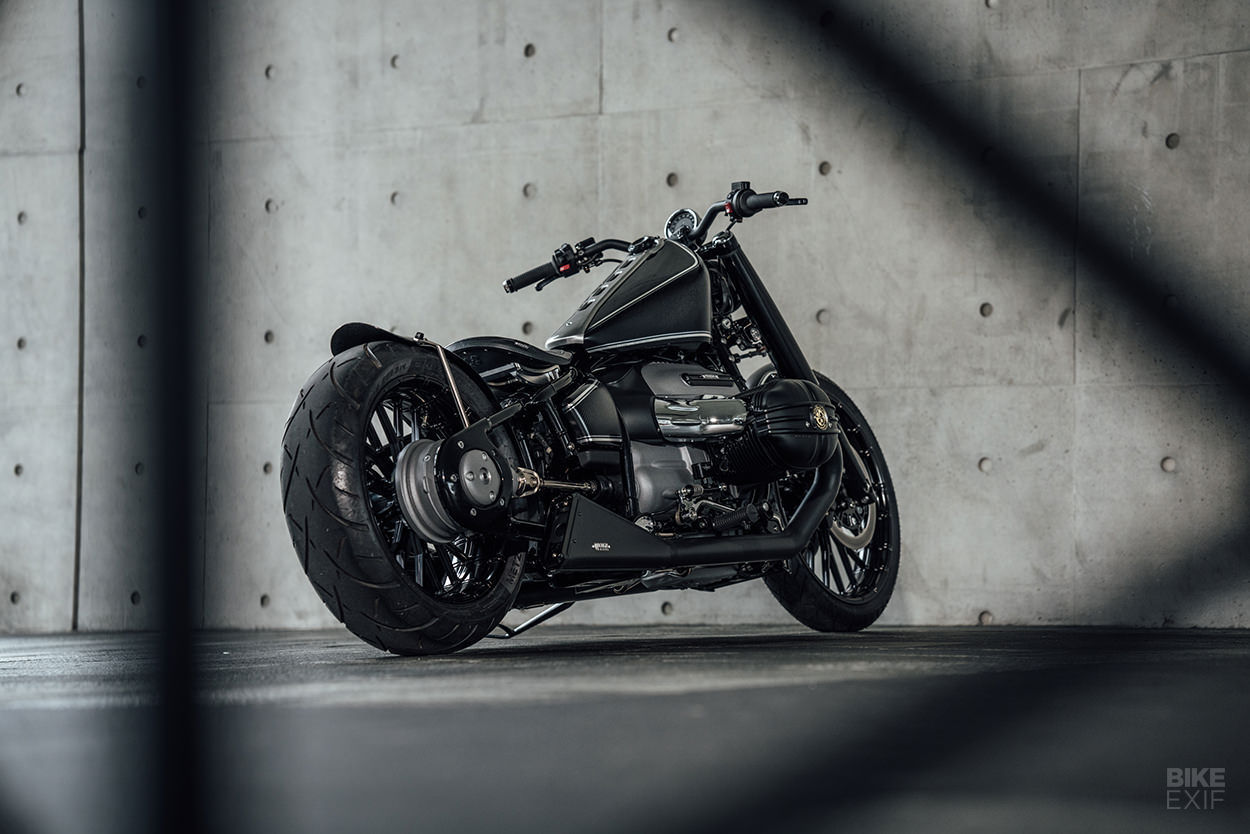 “Looking at the R18 stripped down, without bodywork, the simplicity of the frame made me turn to vintage bikes for inspiration. And the amazing lines of the R32 caught my eye,” he says.

The R32 was the very first BMW motorcycle, revealed at the Berlin Exhibition in 1923, and its influence on this custom is especially obvious in the rising line of the fuel tank. 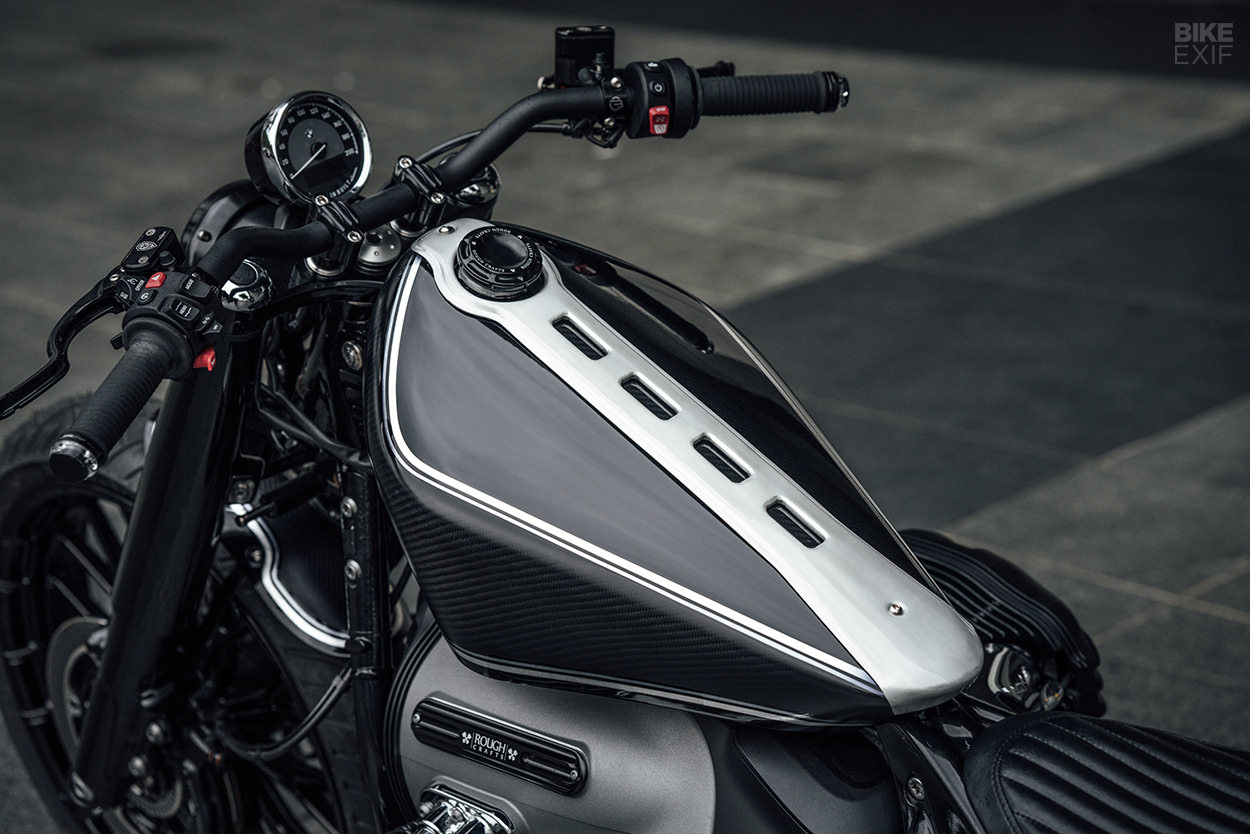 The tank was a difficult part of the build. Winston had to cut the stock shell away from the tunnel, leaving the huge fuel pump in situ. The new outer part of the tank was then grafted onto the existing, slimmed-down base.

“I was going to make the tank a lot skinnier, but that wasn’t possible,” says Winston. Careful pinstriping adds a slimming effect, and there’s an aluminum trim piece running along the top—a nod to the frame rails above the underslung R32 tank. 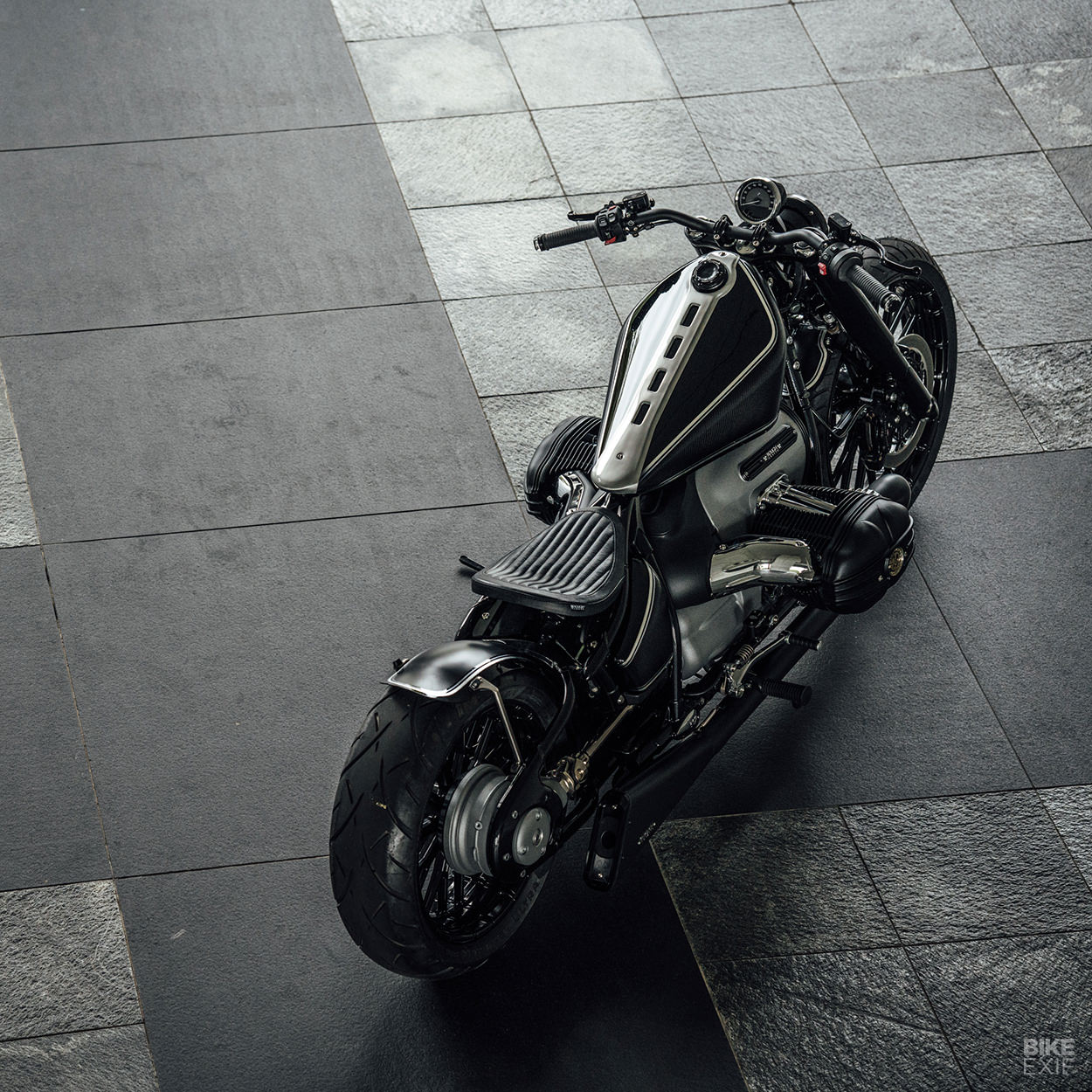 The nitty-gritty of the fabrication was done by Taipei fabrication specialist MS Pro, and the new tank is topped off with a cap from Rough Crafts’ own range. Custom-made ‘fins’ cover the electrics between the tank and steering neck.

There are vintage overtones in the frame of the R18 too. “People say it’s very similar to the Harley softail, but to me the frame triangle is a very different,” says Winston. “The boxer engine is low and wide, which makes the triangle lower too.” 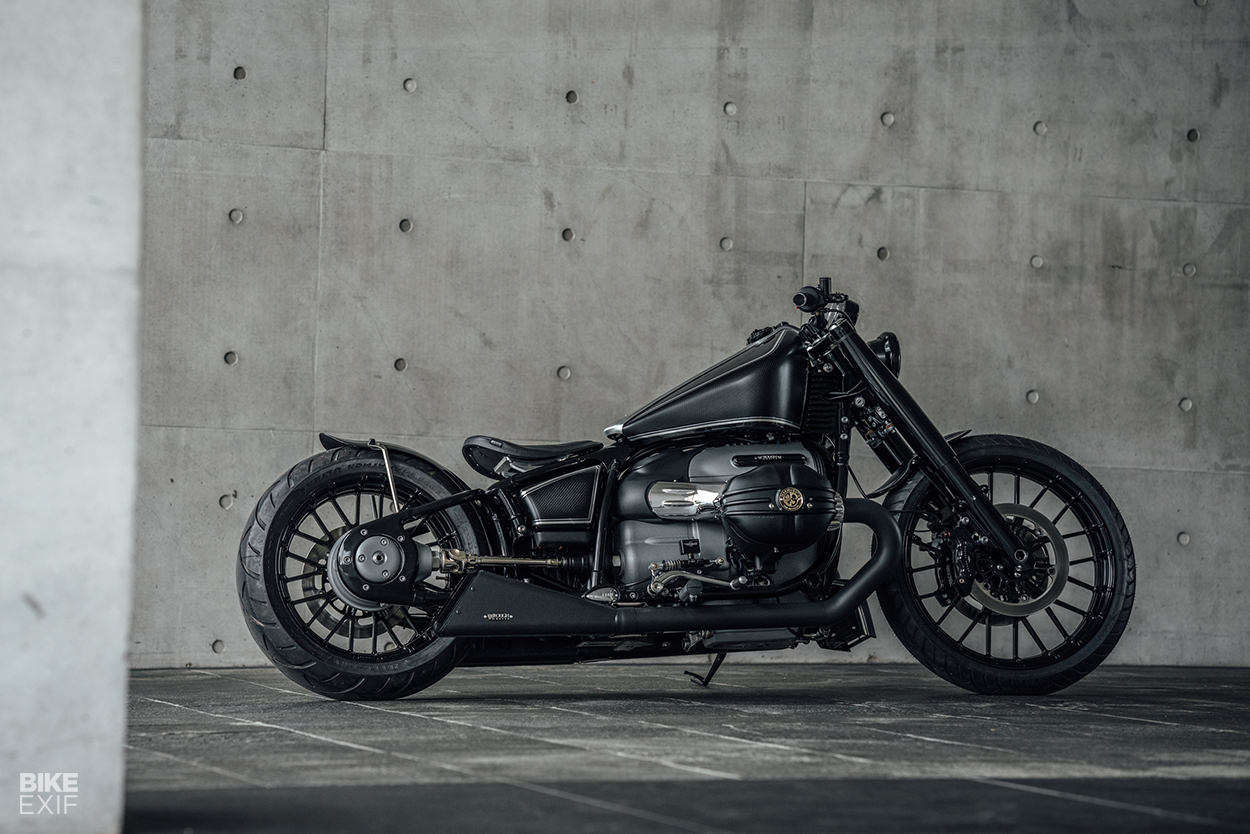 Winston has dropped the R18 a smidge, using parts from Walzwerk. The fork tubes are slightly shorter, with new progressive-rate springs installed, and the rear shock is 40mm shorter too.

The bike now rides on Arlen Ness Y-spoke rims, CNC-machined from forged aluminum. “We wanted something with the cleanness of billet wheels, but with that vintage spoked wheels vibe,” says Winston. 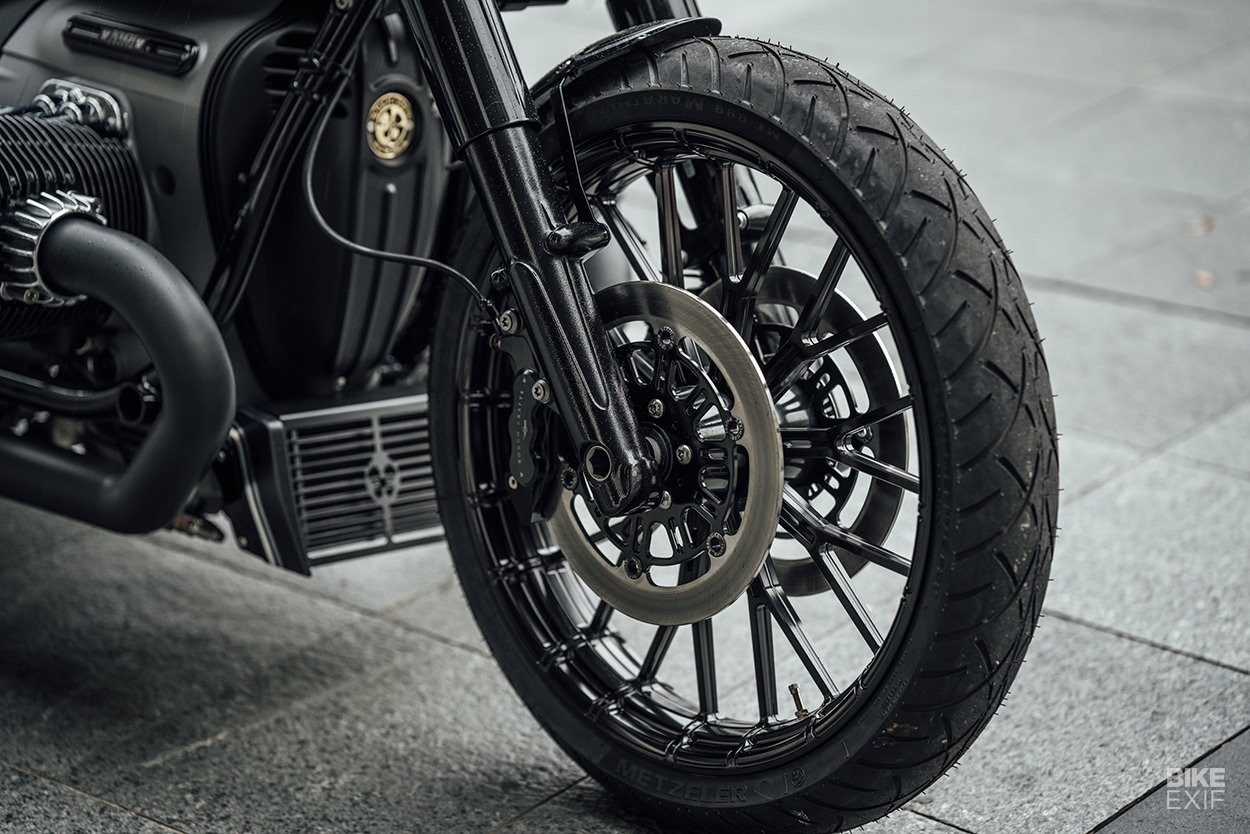 The rims have gone up two inches in size, compared to stock; 21 inches at the front, and 18 inches at the back. They’re wrapped in Metzeler ME 888 Marathon tires.

The brakes get a huge upgrade too, with top-flight Beringer kit. There are six-piston calipers at the front, a four-pot setup at the back, and custom disc carriers all round. And the master cylinders have been upgraded to Beringer. 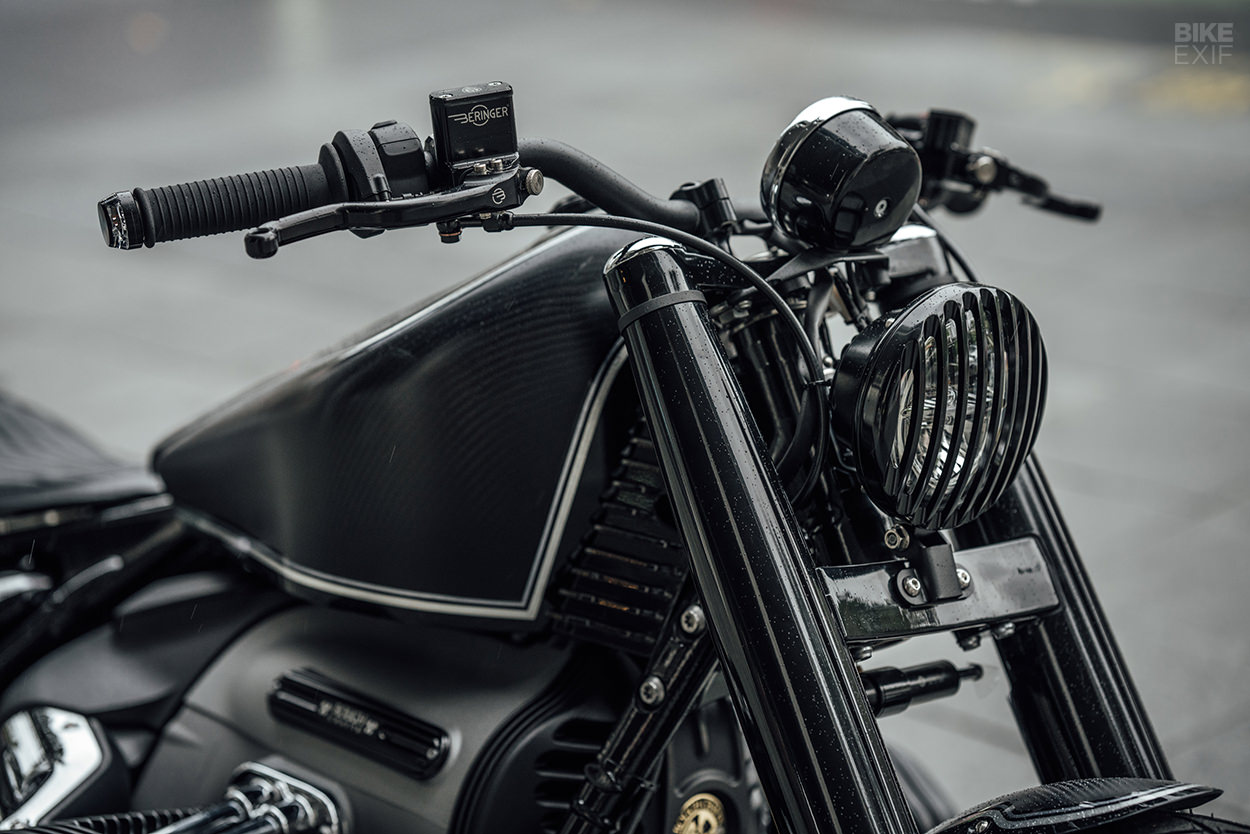 “Beringer have already developed a full brake/hand control kit for R18,” says Winston. “We only had to make wheel-matching disc carriers, and it just works.”

The bars are custom, and fitted with discreet Motogadget mo.blaze blinkers and BMW’s own heated grips. The headlight is custom, and capped off with Rough Crafts’ much-copied grill. 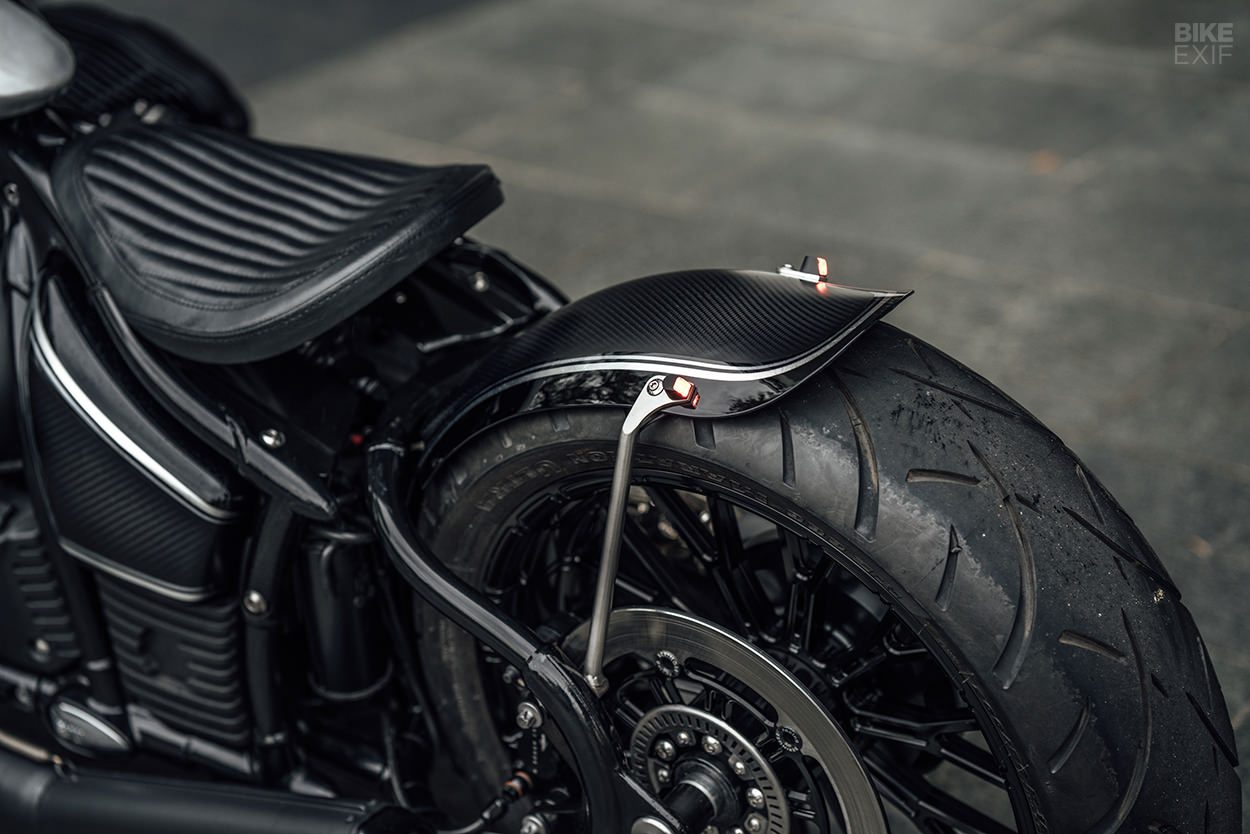 R18 owners wanting to add a little Rough Crafts black magic to their own bikes are in luck. Winston developed bolt-on parts while doing this build, which means you can add the beautifully finished solo seat (with carbon fiber pan and CNC’d bracket) to your own BMW.

The carbon fiber and stainless steel radiator shrouds will also be available, plus the sleek front and rear carbon fiber fenders. Even the rear fender brackets are a work of art, with Winston’s own ION 3-into-1 indicators integrated. 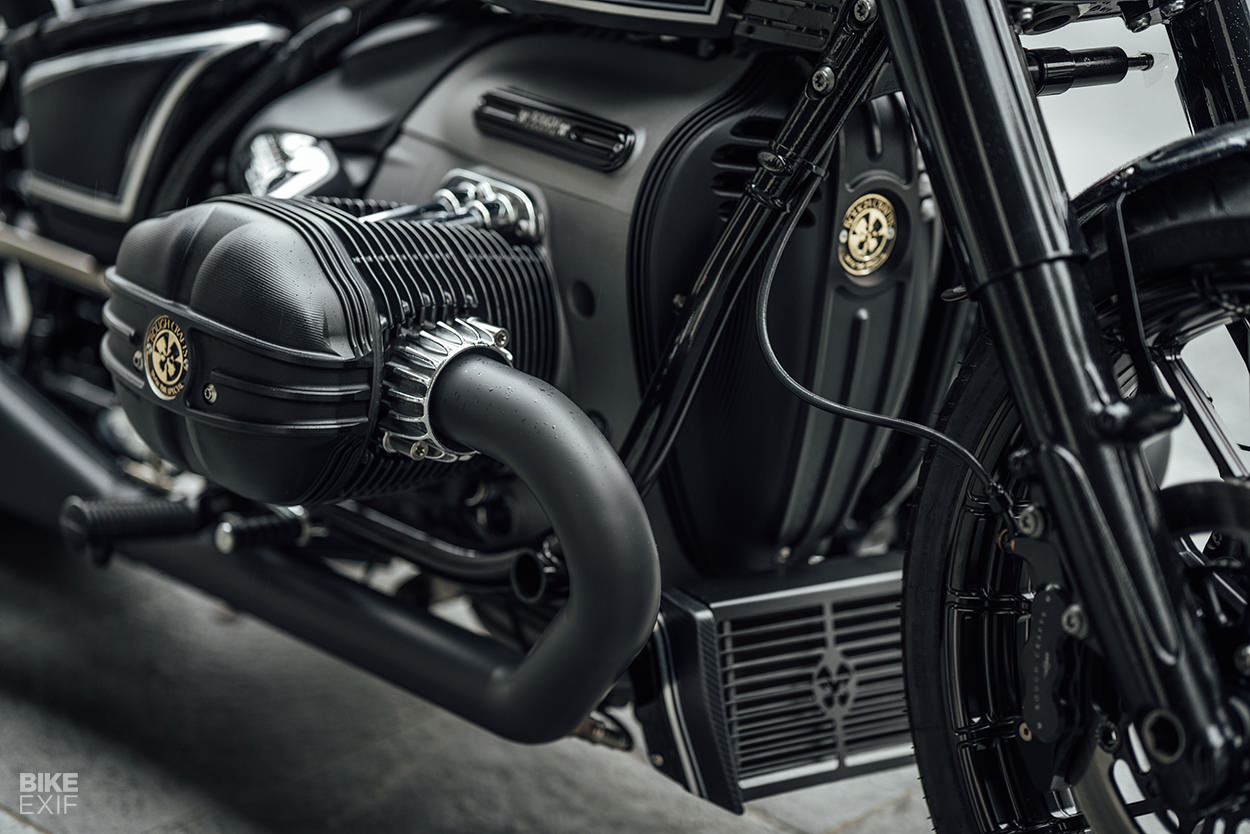 The front housing cover of the engine and the valve covers are RSD parts that are available online, but the beautiful metal badges are one-offs by regular Rough Crafts collaborator 2 Abnormal Sides.

R18 owners in two minds about the stock fishtail mufflers should note that the huge exhaust system on this bike is also slated for production. 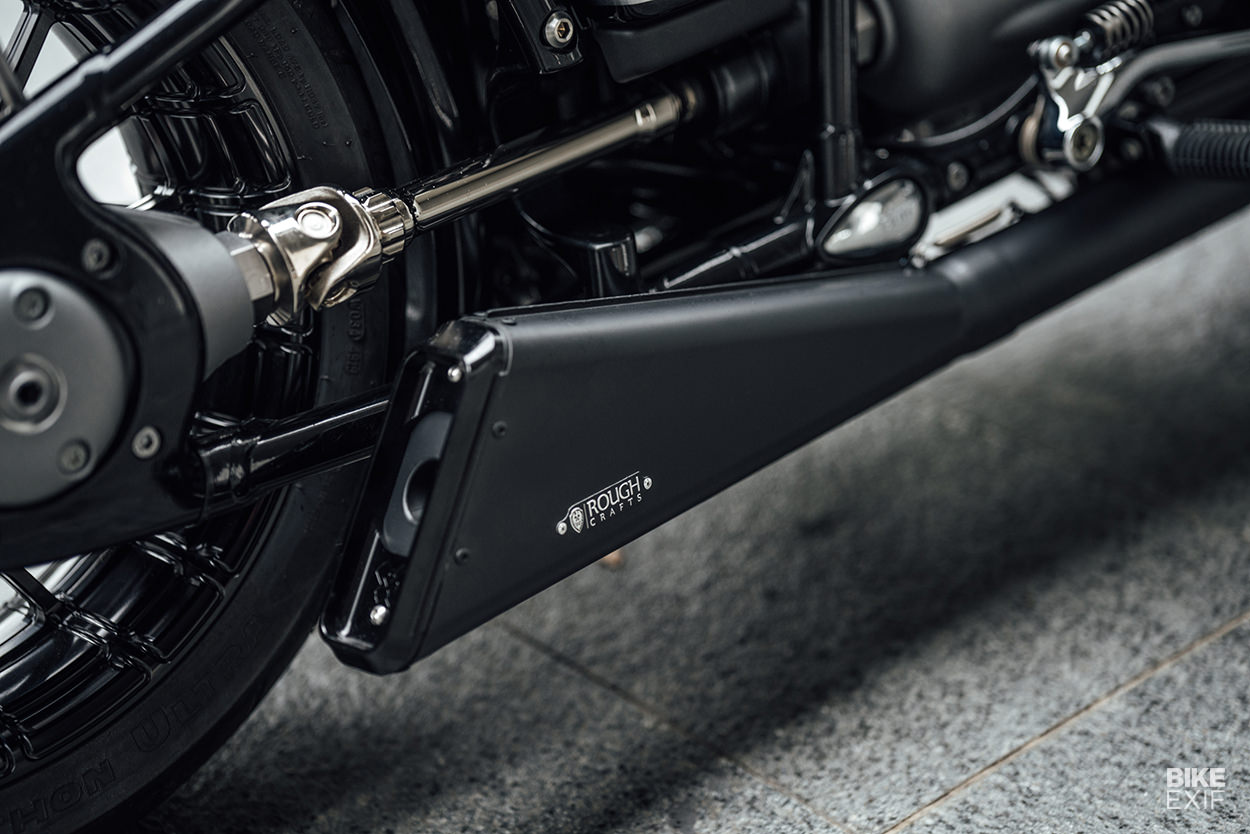 “We wanted something to extend the ‘long and low’ stance, and also flow with the overall design,” says Winston. “The triangular tank inspired the up-swept tail pipes, which are linked to massive 2.5-inch headers to balance out the bike’s mass.”

Everything was slotted together with the help of CH Moto in Taipei, with the incredible paint and pinstriping handled by Line&Circle Custom Studio. It’s even further beyond BMW’s own exemplary level of finishing on the R18. 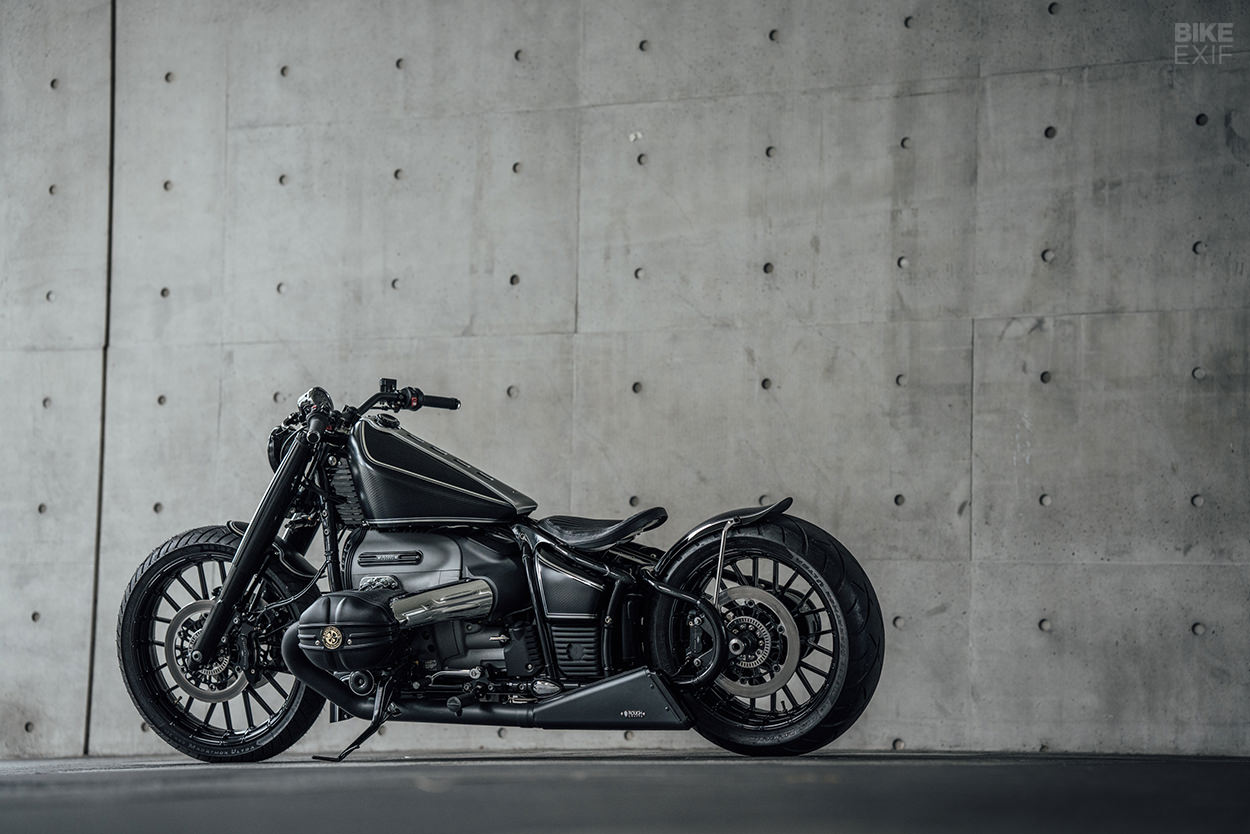 It’s also no easy feat to customize a complex bike like the R18, let alone give it such a deliciously gothic vibe. “Nowadays, more and more technology goes into production bikes,” Winston notes. “That challenges not only designers and manufacturers, but also us custom builders.”

“How do you maintain the functionality of the bike, yet still make it look clean and simple? I think we delivered with the Berlin Barnstormer.” 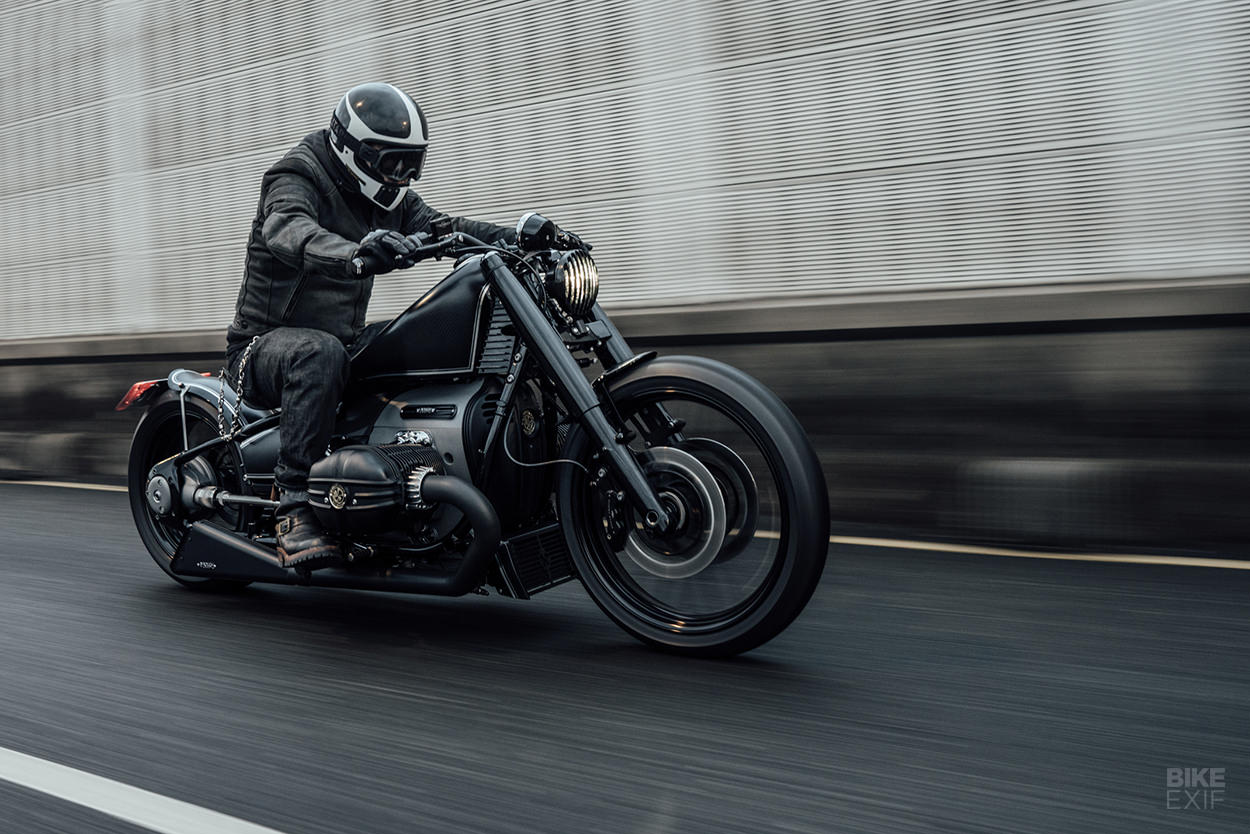