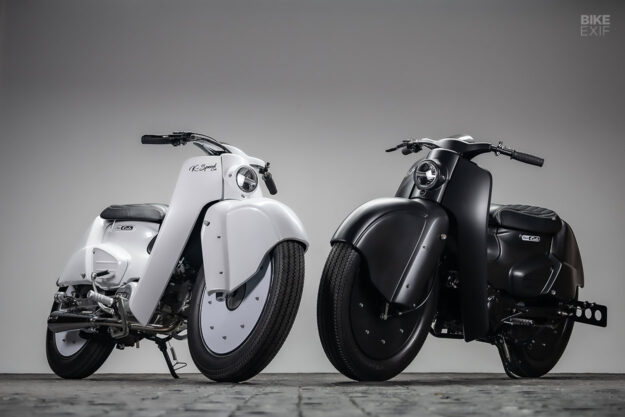 The fact that you can still buy a brand new Honda Super Cub today, more than six decades after it first launched, is pretty cool. But what’s even wilder is that the Super Cub hasn’t strayed much from its original look. It’s so iconic, that calling it a modern classic would be a gross understatement.

The Super Cub custom scene is just as enduring—and one outfit that stands head and shoulders above the rest is Thailand’s K-Speed. They have a knack for tweaking the popular ‘underbone’ enough to make it special, while still retaining some of its base aesthetic. K-Speed’s Cubs almost look like they could have been built by Honda themselves, in an alternate reality where the brand’s designers were a little more daring. 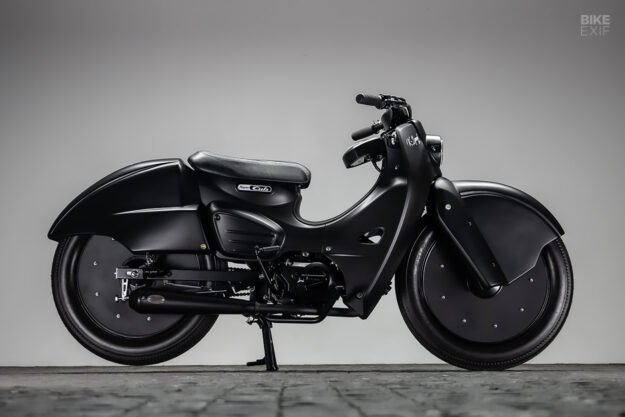 K-Speed has produced a staggering number of Super Cub customs to date. And since their primary business is parts manufacturing, they’ve got a laundry list of bolt-on bits for it too. Yet they still manage to find ways to put a fresh spin on it each time.

This latest iteration is laced with elements from previous K-Speed builds, but it ups the ante with custom bodywork that lends an art deco vibe to the Honda. The two bikes you see here are based on brand new 2022-model Super Cub 110i units, and are identical apart from their paint. 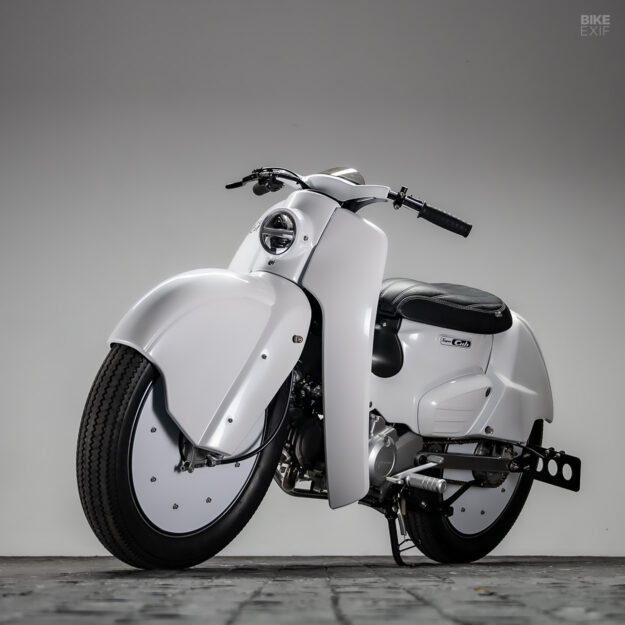 Grabbing the most attention are the Super Cub’s generous new fenders. They’re based on an idea that K-Speed’s founder, Eak, has had milling around in his head for two years, while waiting for the right project to try it out on.

It reportedly took some doing to fine-tune the design, but in the end it paid off. The fenders complement the Super Cub’s standard lines perfectly, while also adding a healthy dose of K-Speed’s hallmark styling. The shop brought them to life by first creating molds, then producing the final parts out of ABS plastic. 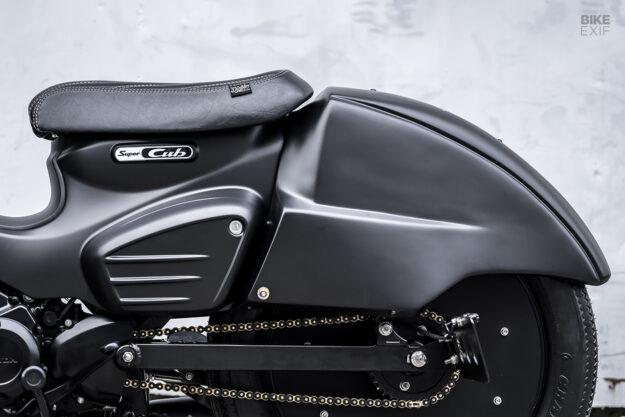 A set of custom-made wheel covers add more visual bulk to the pint-sized scoot. K-Speed’s rework of the Super Cub retains some of its original plastics, but adds neat touches, like ribbed side covers.

It also sports a handful of clever off-the-shelf mods from K-Speed’s own ‘Diablo’ range of parts. Up front, the Honda’s OEM LED headlight’s been relocated to a Diablo housing that places it lower. Further back, the original speedo sits closer to the rider—also in a plug-and-play Diablo bracket. 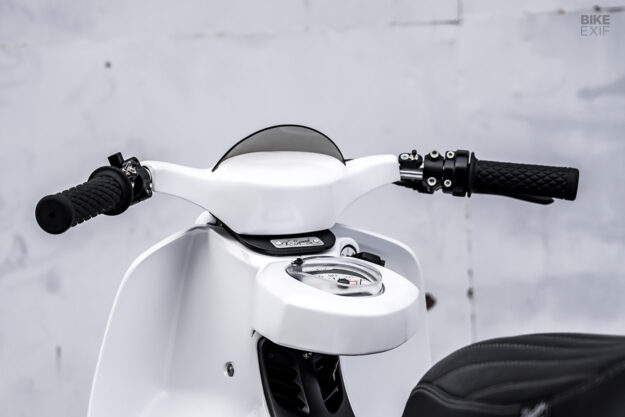 The Super Cub’s cockpit’s been trimmed down too. Up top is a new set of handlebars, encased in a custom enclosure with a small tinted fly screen. They’re fitted with new grips and vintage-style micro switches.

Out back is a side-mounted license plate bracket, which also hosts the LED taillights. Tiny LED turn signals flank the bike. A new seat is perched on top, with modified foot pegs and a Diablo exhaust keeping things classy lower down. 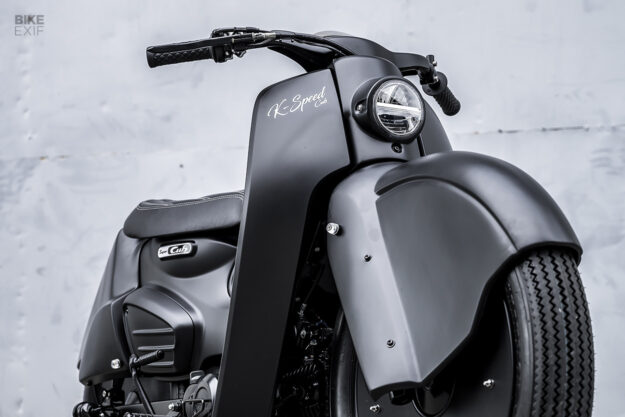 K-Speed plans to produce 100 Super Cubs just like these—50 in black and 50 in white. The lack of any livery or graphics is deliberate, with Eak wanting to emphasize the lines of the bodywork without any distractions.

Despite sharing a spec sheet, the two versions stand in stark contrast to each other. The white bike feels elegant, while the black bike feels distinctly moody. Branding is limited to a tasteful K-Speed logo on the front, with Super Cub badging further back. 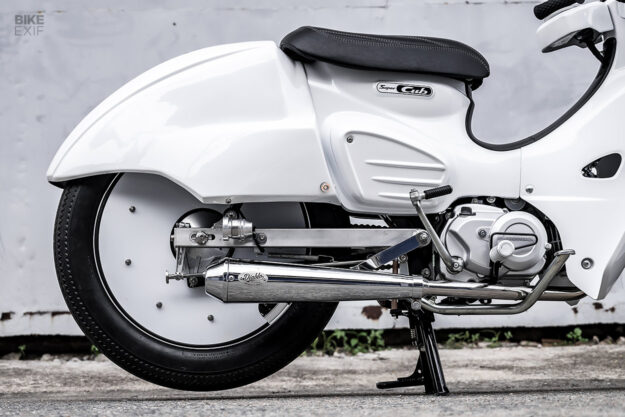 Even though you’ll find some of the parts used here on K-Speed’s online store, you’ll need to put in an order if you want one of these for yourself. While some of the bits are easy to swap out, others require a little extra fettling.

You can’t tell at first glance, but these prototypes are running lowered suspension, modified subframes and extended swingarms. Wide-ish 17” sawtooth tires round out the package. 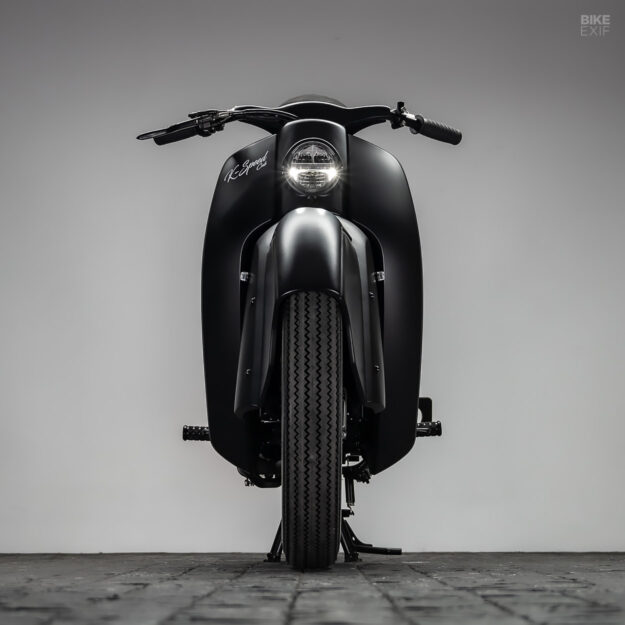 If you’d like to see these two Super Cubs in the flesh, K-Speed will be taking them to the Yokohama Hot Rod Custom Show later this year. The standard at the show is high—but somehow we don’t think these cuties are going to have any trouble garnering admiration.

That leaves only one question: black or white? 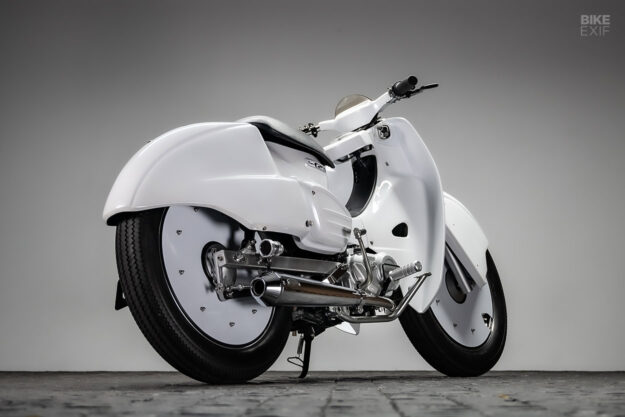