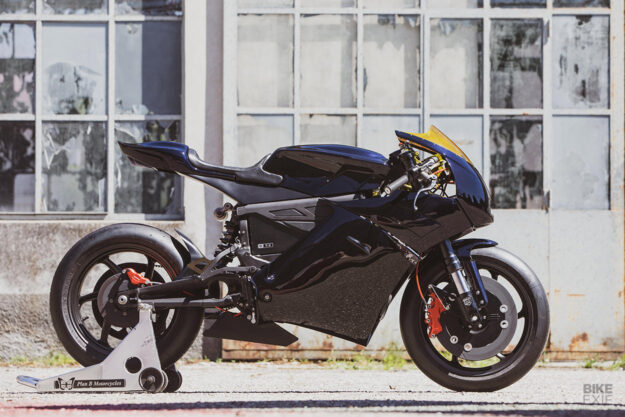 Dirt bikes can make surprisingly good road customs, mostly due to their light weight and the easy tune-ability of most offroad powertrains. But an electric dirt bike? That’s something you don’t often see.

‘Blackbird’ comes from Italian builder Christian Moretti, who runs Plan B Motorcycles from his base in Laveno-Mombello, just outside Milan. Clad in stealthy black bodywork, its inspiration comes from an unusual source. 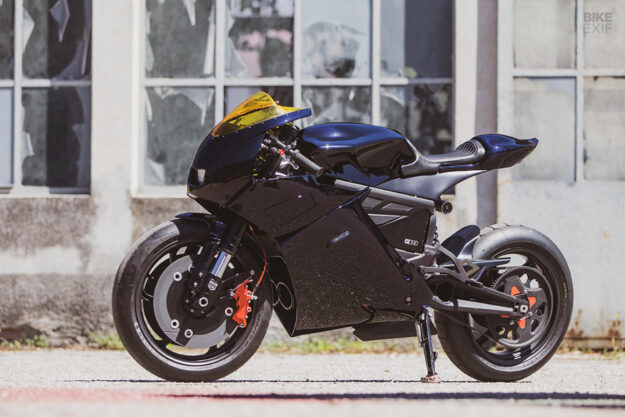 “The SR-71 Blackbird is one of the most iconic aircraft ever built, and it used the top-notch technology of its time,” says Christian. “Its unbelievable speed allowed it to simply leave missiles behind. Nowadays, electric bikes are arguably the top technology, but are they really working? For sure they can be pretty fast.”

The Zero FX is indeed pretty fast for an enduro bike. When it left the factory, it had a classic dirt bike profile—but Christian has turned it into a sleek road machine. 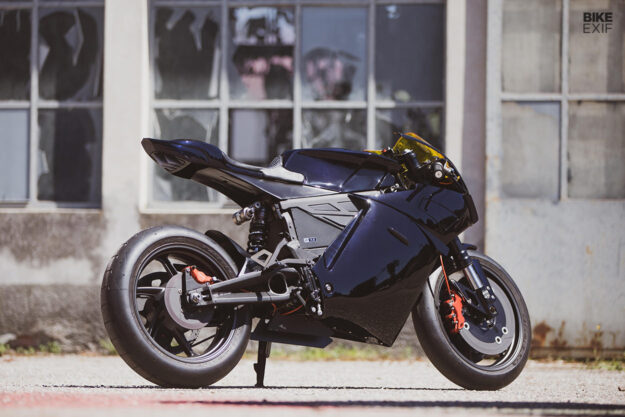 “It started life as a 2019 FX,” he reports. “The customer asked for a small, lightweight and ‘modern’ cafe racer. And because I love swapping purpose on a bike, the off-road entry level Zero was the perfect choice.” The 7.2 kWh version of the factory FX tips the scales at just 289 lb (131 kg), so the weight box was immediately ticked.

“When working on electric customs, it looks like there are two main directions these days: the ‘retro’ way or the super-futuristic one,” says Christian. 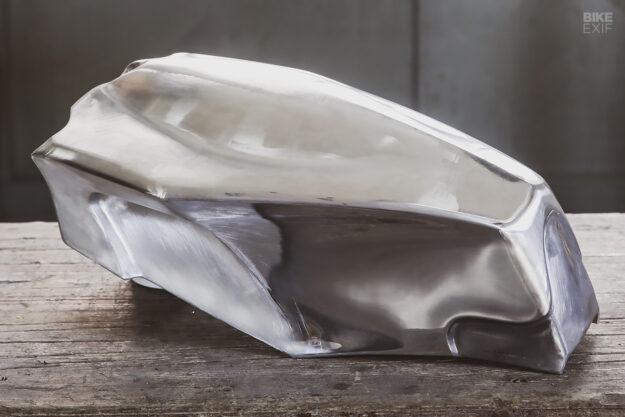 “One of the main goals of this build was to set aside the green argument for a bit to see if a ‘contemporary’ electric custom was possible—and if it would ‘fit in’ without the need for an internal combustion engine.”

Christian has hand-crafted the bodywork in aluminum, with swooping lines that fit within the modern sportbike vernacular but have the simplicity of retro racers. The metal was then ‘ink coated’ by Paint Republic Vignale. 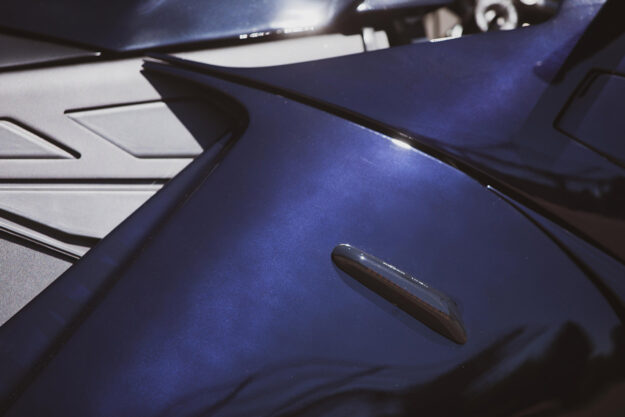 “A crazy job for a crazy couple of alchemists,” says Christian. “It’s a very deep, chrome-like black until the sun touches it. Then you can see the aluminum of the bodywork underneath.” The magic potion was laid directly on top of the aluminum panels for a see-through effect, and not a single blob of filler has been used to smooth things out.

Flipping the ignition will start a ‘pre-flight check’: two air ducts on the side of the new fairing open and close, and they will open up every time the brakes are engaged—working as an active aero/air brake combo. At the same time, two fans inside the lower fairing will spin up to maximize cooling airflow. 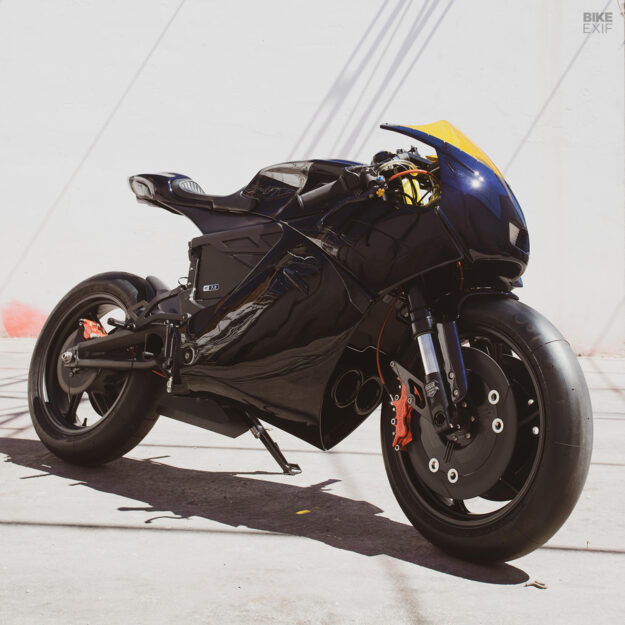 “The fan speed is controlled by the throttle,” says Christian. “The more ‘gas’ you give to the bike, the more air is channeled through the fairing, cooling the battery, motor and regulator assembly.” It also makes a jet-like sound, which should alert other road users to the presence of this unusual machine.

To blend with the new bodywork, Christian has remodeled the back of the frame and tweaked the geometry to make it more suitable for the road. 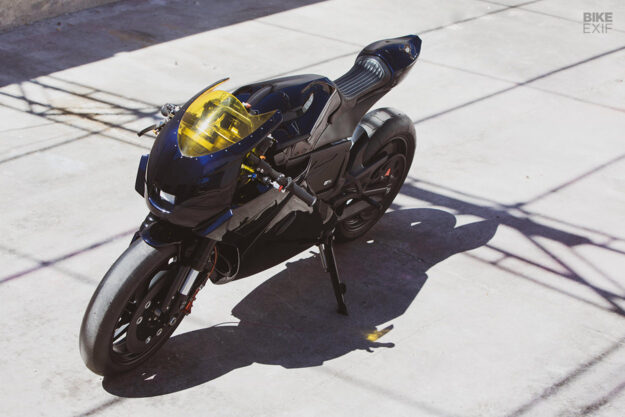 The upper and lower clamps are new, CNC’d from solid aluminum blocks to Christian’s own design and with the right amount of offset. “We ended up with a quite neutral 98mm trail, with some room for adjustment.”

The 41mm Showa forks have been replaced by beefy 50mm Marzocchis, with custom made lowers to accommodate two massive Beringer six-pot calipers and a pair of ceramic 340mm rotors from BriLo Tech. (“Yes, it’s definitely overkill!”) 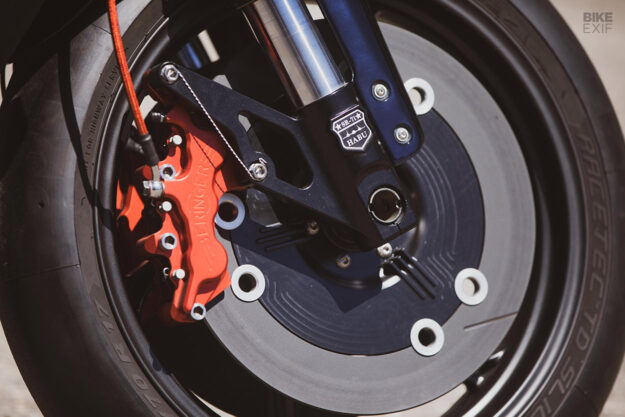 At the back there’s a fully adjustable monoshock from Gears Racing, and the OEM enduro wheels have been ditched in favor of a set of 17-inch Grimecas shod with supermoto tires.

Due to the Moto3-like dimensions, Christian has also moved the clip-ons so that the leading part of the rider triangle is 50mm forward—allowing for a more laid down riding position, and a bit more weight on the front of the bike. 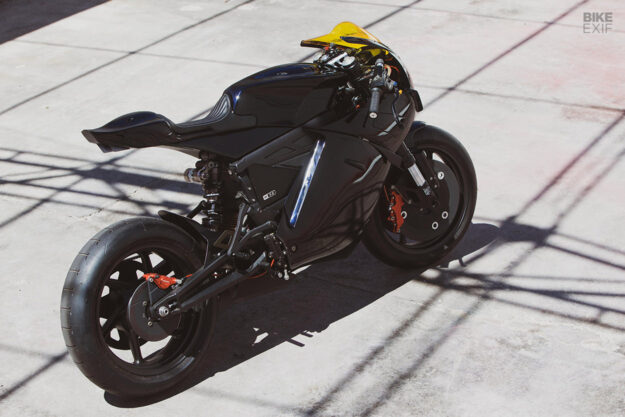 There’s some pretty considered and serious thinking going on throughout this Zero, but Christian has allowed himself a touch of levity in the cockpit area. “it’s super busy, as a proper aircraft one should be!” he says.

On top of the original digital gauge, there is now an infrared rear-view camera and a top-mounted radial steering damper integrated in the upper clamp. Plus several aircraft switches and an attitude indicator. “Which serves absolutely no purpose, but it’s fun to look at while you’re taking a corner!” 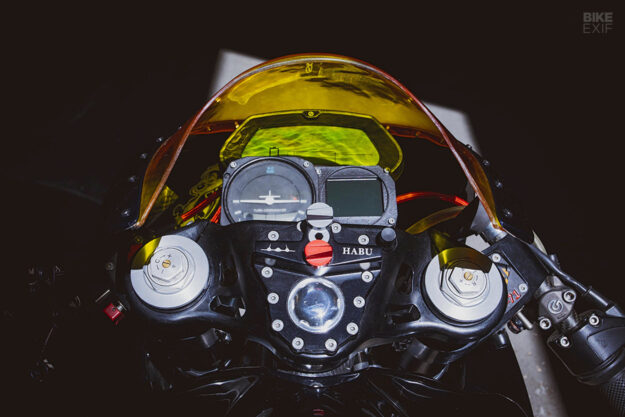 With its low weight and instant-on torque, we reckon this Zero will be fun wherever it’s ridden. And will no doubt attract a ton of attention when parked up, too. 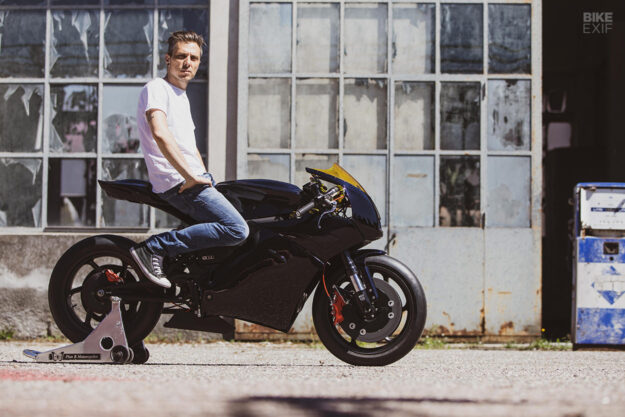