BMW R00: A conversion kit to turn your airhead electric 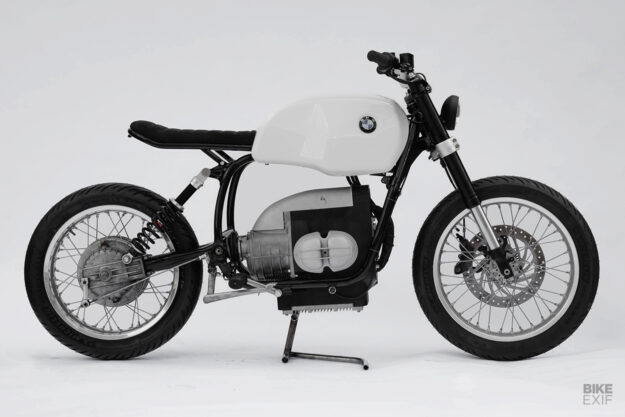 Switching classic cars to electric power is becoming almost commonplace. There are companies and kits that can electrify everything from old Land Rovers to Rolls-Royces. Ford is getting in on the game, offering the Mustang Mach E GT motor as a ‘crate’ engine. And if you have the cash to spare, Jaguar’s own restoration department will even drop an I-Pace motor into your vintage E-Type.

Motorcycles are a different proposition, though. There’s less space to hide an ugly battery, the tech is biased towards four-wheelers, and motorcyclists as a group are less accepting of electric power than the average car driver. 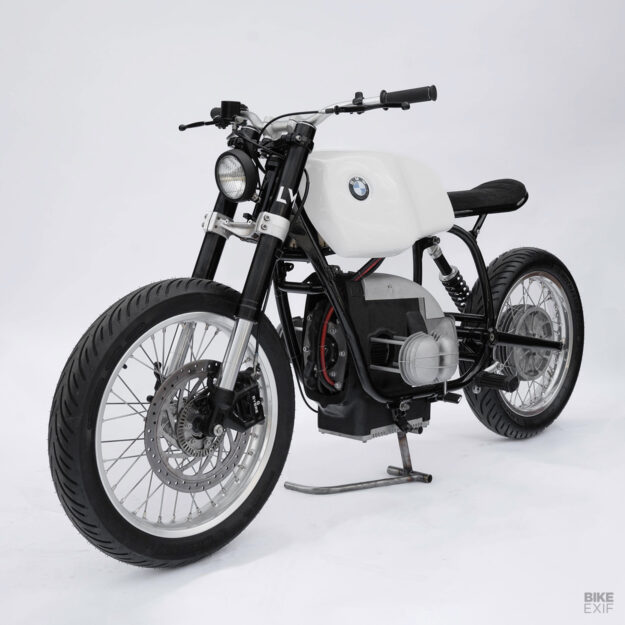 That makes Luuc Muis something of an outlier, because he’s just developed and released a kit that turns BMW airheads into electric motorcycles. You may already have heard of Luuc: he’s a Dutch product designer, the founder of LM Creations, and most famous for his Indian Scout Bobber called Hasty Flaming Buffalo.

Taking an R-series frame as the base, Luuc has created a bolt-on electric drivetrain that replaces the existing engine—but keeps the gearbox and the rest of the driveline. And it looks rather amazing, too. 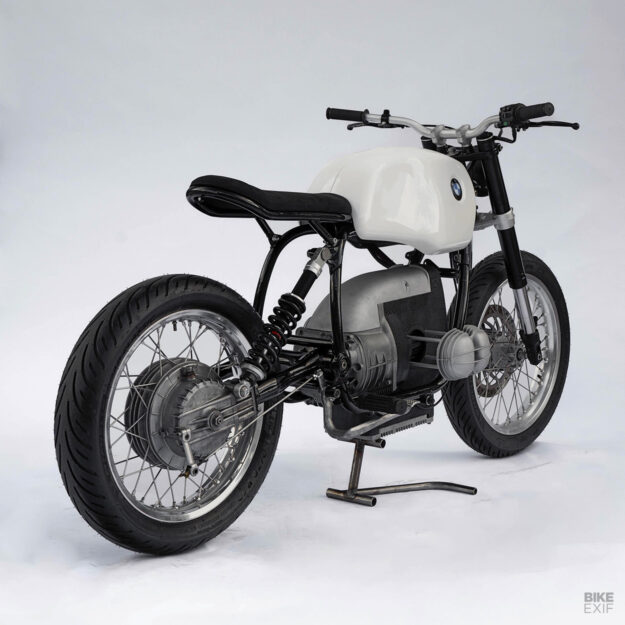 The prototype shown here uses a BMW R80 donor bike. But Luuc believes it’s possible to bolt the system to all R-series bikes built between 1969 and 1995—with just minor modifications to the top tube in some cases.

The most intriguing aspect of this conversion kit is the way Luuc has integrated the electric motor. He’s reverse-engineered and cast new engine cases using 3D scanning, with internal mounts to accommodate the motor, controller and wiring. 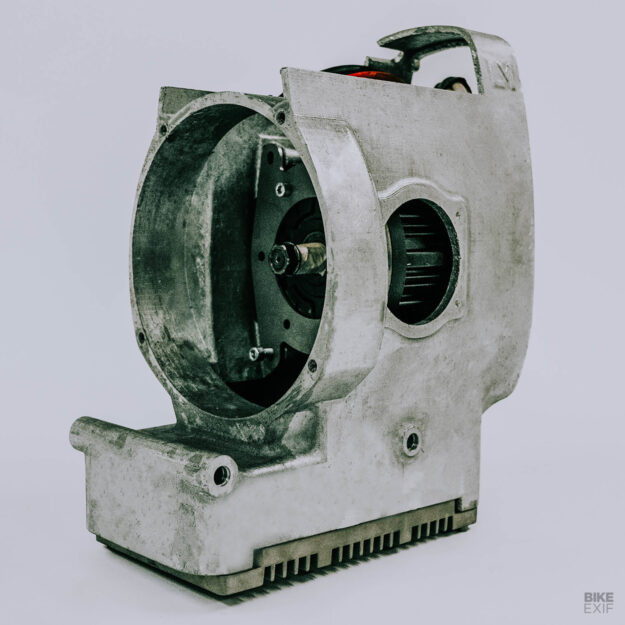 “For the battery pack we took a similar approach,” he says. “We 3D-scanned an original R80 gas tank and frame, and designed a battery pack that would fit without requiring any welding of the frame.” (For an R100 frame, you may just need to remove some brackets.)

“It’s actually possible to mount all the original engine components to the new casing, to return the airhead back to its original look. But that would add a lot of useless weight!” 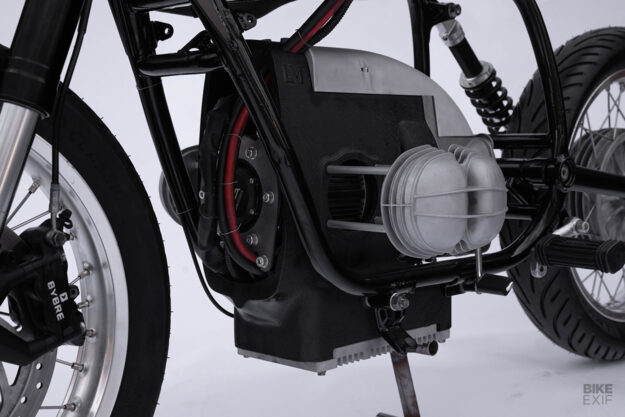 The power unit is the commonly available ‘QS138’, rated at 72V and 11kW. Along with a clutch adapter, it’s housed in a new aluminum body that bolts to the gearbox—just like the original combustion engine. The unit includes a built-in controller and a DC converter that plugs into the 12V wiring system.

“The electric motor is capable of 7,500 rpm, so the speeds are the same as the original engine—which redlines at 8,000 rpm,” says Luuc. “The torque curve is of course different. But the riding experience is very similar, with the gearbox still functioning.” 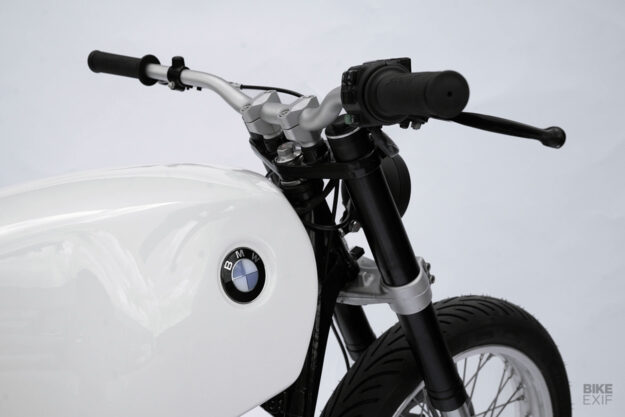 There are two options for the 230V charger: a 1.8 kW or 3.3 kW system. The faster system charges the battery to 80% in about an hour, and to 100% in another hour. The 1.8 kW system takes about twice as long, but since that charger is a lot smaller, it is possible to mount it on the bike instead of keeping it offboard in the garage. 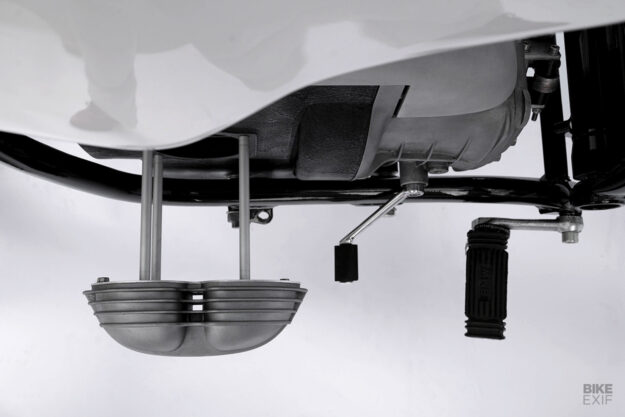 The battery cover is smooth fiberglass, ready to be finished with primer and paint. “It’s possible to modify the original gas tank and fit that over the battery pack,” Luuc notes, “but it’d be advisable to line the gas tank with a non-conductive material.”

Why not house the batteries in the famous boxer ‘cylinders’, we wondered? “We thought about that, but it wouldn’t be possible to make an easy and safe system,” says Luuc. “In the case of a crash with the cylinders touching the ground, we didn’t think this was a great idea—since 72V will hurt!” 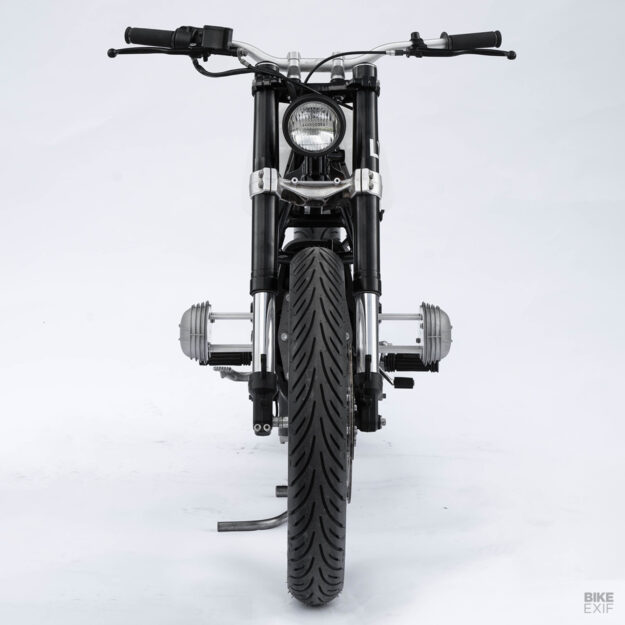 The other modifications are as simple as possible. “We wanted to emphasize the EV part,” says Luuc. “So we removed the cylinders, carbs, intake and front engine cover. But we mounted a low profile top engine cover to give it some ‘body’.”

The R80 frame has been converted to monoshock rear suspension, using parts from a wrecked R100 RT frame, and a new YSS shock. All unnecessary mounting brackets were removed from the frame. 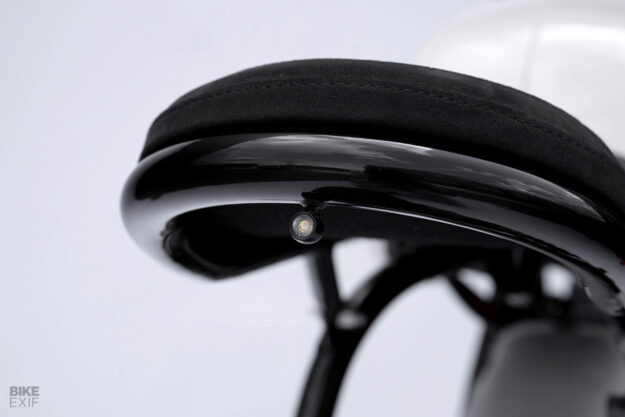 There’s a minimalistic subframe with a little kick-up, to support a simple custom perch from MJ Seats and a single Kellermann Atto rear/brake light array. All the frame components were freshly powder coated in gloss black.

The front suspension is from a KTM 390, hooked up to a BMW F650 front hub. The wheels are F19/R18 and have stainless spokes laced to aluminum rims. “We mounted the widest tire possible in the rear without having to make any modifications to the swingarm or offset the rim,” Luuc reports. The tires are Michelin Roadmaster Classics: “A great basic tire for urban use, as is the bike itself!” 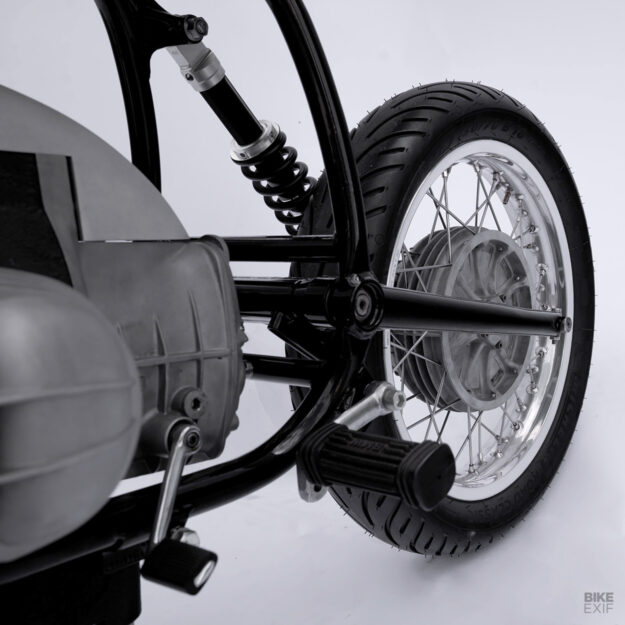 Despite the complexity of the kit, installation is relatively easy and Luuc supplies a video to customers. And the next step is to get the conversion kit certified to the EU R100 EV safety standard—which will make it possible for owners to alter the registration paperwork and officially list it as an electric motorcycle.

It’s possible to buy the elements of the kit individually, but LM Creations will sell you the complete package for €9,450 (US$9,945) with the 3.3 kW charger (or a little less for the 1.8 kW with onboard charger). And for an extra €1,450, Luuc’s crew can install the kit into an R-series airhead of your choice. 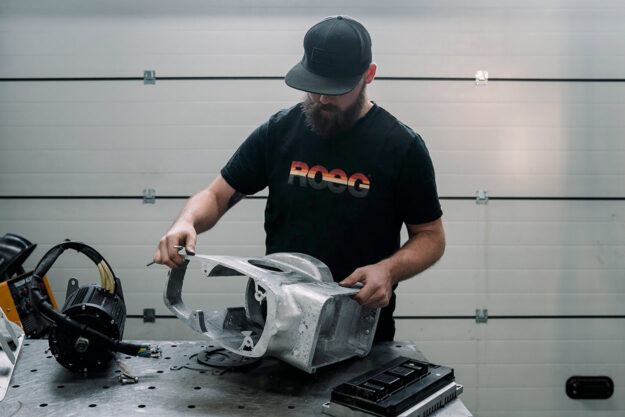 For folks who love the idea (and acceleration) of electric motorcycles but can’t stomach the styling of the commercially available offerings, Luuc’s creation should tick a lot of boxes.

If you’re within riding distance of Berlin, head over to Reload Land this coming weekend—it’s the first festival dedicated to electric motorcycles, and the BMW R00 will be on display. 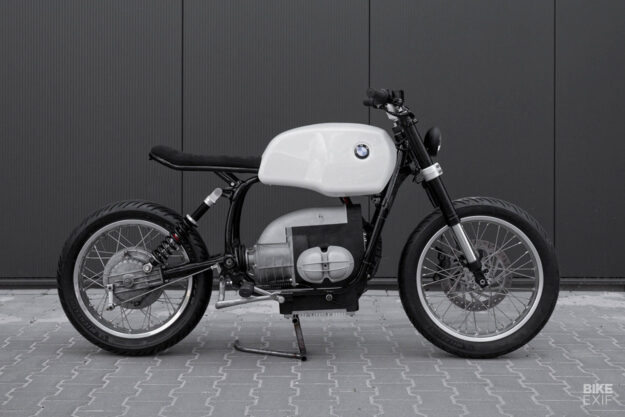