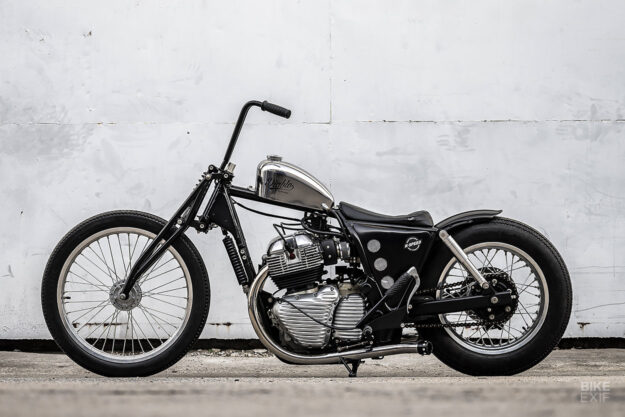 Does the custom motorcycle workshop team at K-Speed ever sleep? Judging by the rate at which fresh and tasty customs roll off their floor, we’re guessing not.

The Thai powerhouse’s custom shop runs alongside their humming parts manufacturing business, so the two often bleed into each other. Sometimes they use their custom builds to develop new parts, and sometimes they use those parts to reproduce their most popular custom builds. But somehow they still manage to find time to build one-off specials, like this bonkers Royal Enfield Interceptor 650 bobber. 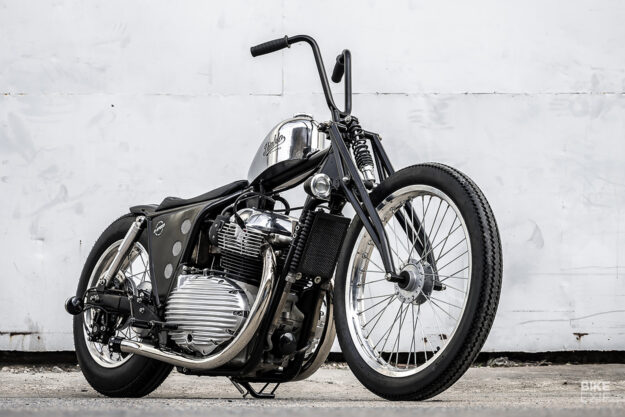 The Interceptor 650 (known as the INT650 in the States) is oft praised for its versatility as a platform for customization. But we’ve never seen someone hit it this far into the left field. There’s no pretending that this style is even remotely practical—but it is deeply intriguing, and sure to pull a crowd at your local café.

In stock form, the Interceptor is already a fairly compact bike. But K-Speed has trimmed it down drastically—to the point that its reasonably-sized parallel twin mill now looks cartoonishly big. 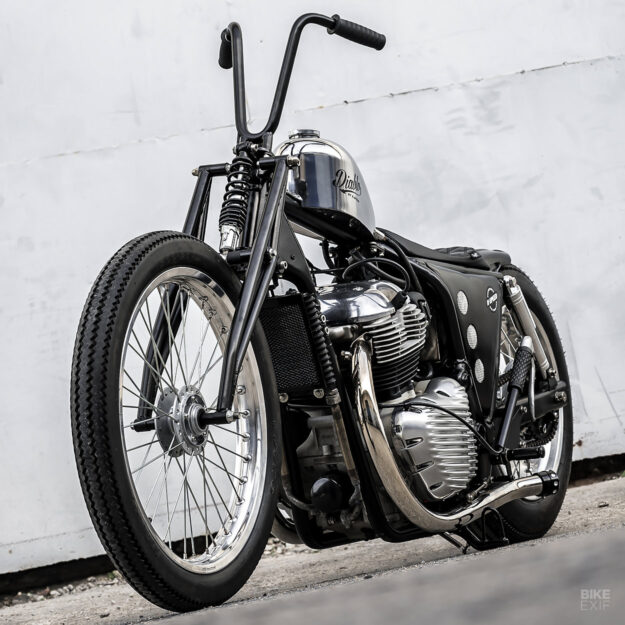 To get there, K-Speed not only binned the Royal Enfield’s bodywork, but its suspension and wheels too. Then they tore into the frame, going above and beyond the usual cut-and-shut work. The entire top section was scrapped and rebuilt, starting at the steering neck and ending in a neat set of custom-made rear struts.

The chassis looks like a rigid setup from afar, but it’s actually propped up on a set of fully-enclosed aftermarket shocks. But the real genius here, is how K-Speed have made the Enfield look dense and squat at the back, but lithe and stretched at the front. 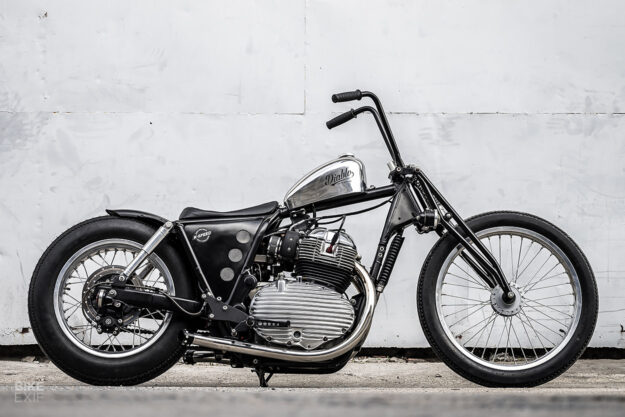 That’s partially down to how the reworked frame has created space above the motor. But it’s also a result of the raked-out springer fork, which K-Speed pieced together from parts they had lying around the workshop.

The Enfield’s new wheel set is incredibly well-judged too. There’s a brakeless 21” wheel up front, with a 16” unit doing duty out back, stopped via a Brembo disc brake setup. And even if you hate vintage sawtooth tires, you can’t deny that they’re perfectly suited to this build. 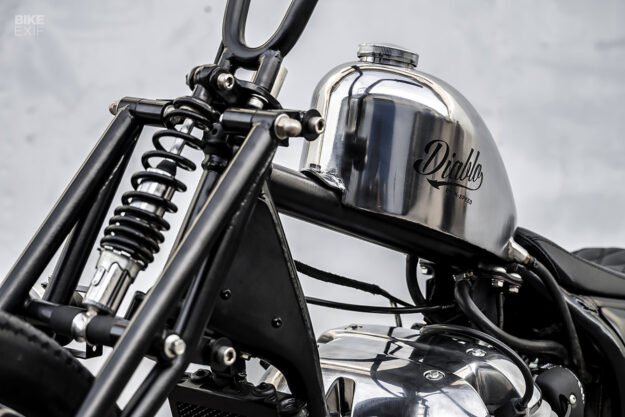 Perched up top is a tiny, handmade peanut-style fuel tank. Since it doesn’t carry much petrol, K-Speed have plumbed it into a second reservoir that’s hidden under the seat. The bike’s OEM fuel pump lives there now too, with everything hidden behind a pair of custom side covers.

The main tank is wrapped in chrome, and adorned with a ‘Diablo’ logo (Diablo is K-Speed’s in-house brand of bolt-on parts). Just behind it is a tidy solo saddle that mixes traditional striped and diamond stitching patterns. The rear end’s finished off with a stubby ribbed fender, done in black. 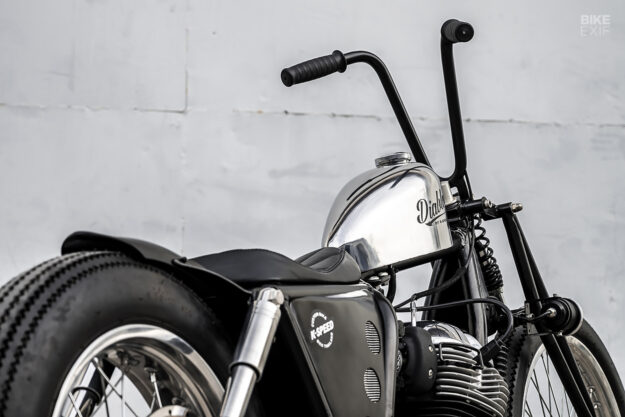 But it’s the Interceptor’s new cockpit that really warrants closer inspection. It’s built around a set of bespoke chopper-inspired bars, designed to run high and narrow. They’re fitted with a set of aftermarket grips and an internal throttle—but that’s it.

Since the Enfield’s lighting consists of nothing more than a small spotlight at the front, and a swingarm-mounted taillight, there’s no need for turn signal switches and the like. There’s also no front brake lever and no speedo, and the ignition and kill switch have been relocated. 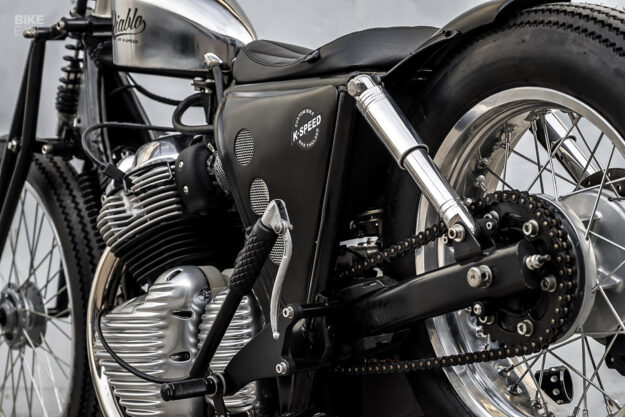 If you’re looking for the clutch, you’ll find it on the left side of the bike, attached to a custom-built hand-operated gear shifter. The setup consists of a shifter shaft fitted with a regular handlebar grip, and a vintage-style reverse lever. All you have to do is reach down behind your foot, squeeze the lever and shift.

The foot controls have been upgraded too, and are now mounted on custom relocation brackets. They now sit a little further forward than before, to make the bobbed Enfield’s rider triangle marginally more comfortable. 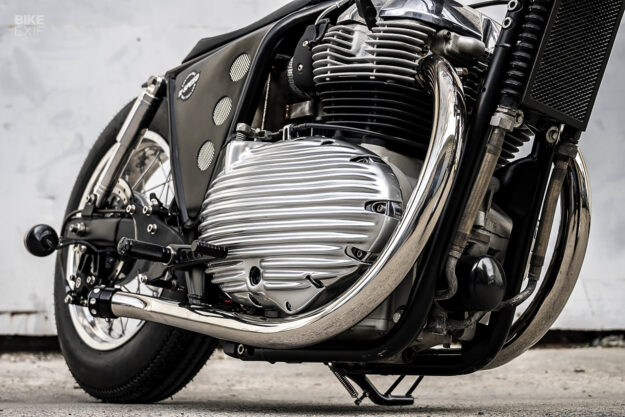 The rest of the build is a collection of tasteful finishing parts. Ribbed covers add an extra visual hit to the Interceptor’s already attractive engine, while a pair of custom headers loop around it. They’re finished off with end caps from K-Speed’s Diablo collection.

Sure, this bobber doesn’t have a front brake, a way to change gears that isn’t sketchy, or any ground clearance to speak of. But what it does have is style; bucketloads of it. 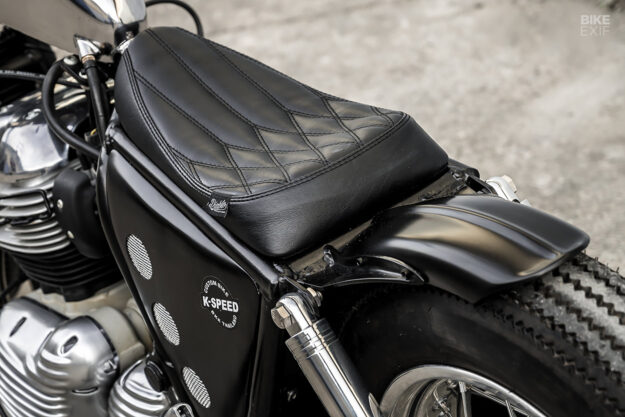 It doesn’t sound like K-Speed plans to reproduce any of the parts they’ve made for this build—nor have they confirmed if they’ll build more Enfields just like it. But we’re secretly hoping they do. Because, despite its idiosyncrasies, we’d love to park one of these in our garage. 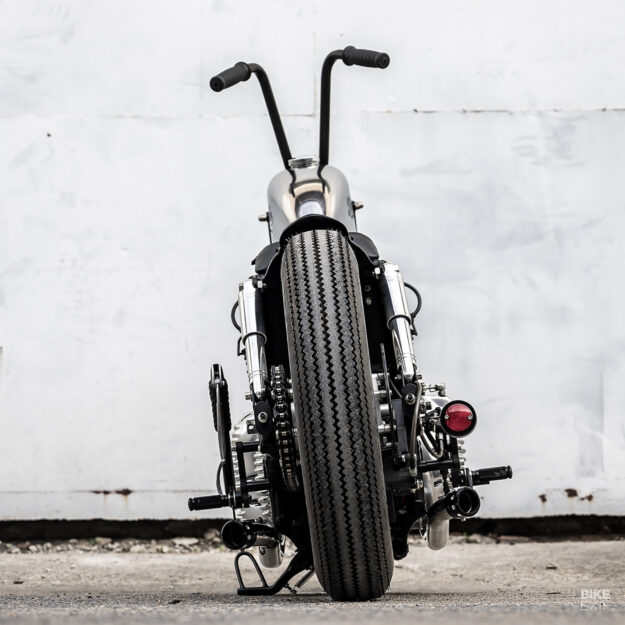