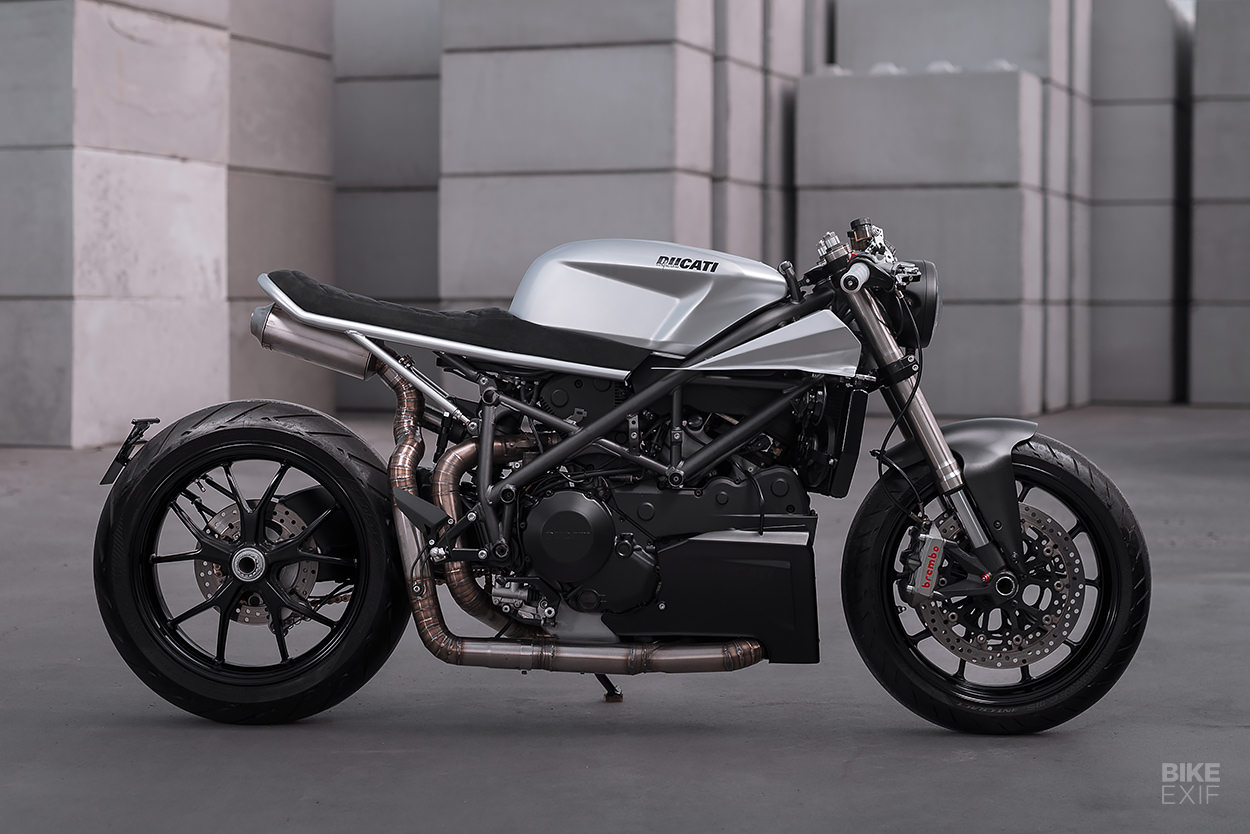 When a new custom builder hits the scene, there’s no way of knowing if they’re a one hit wonder, or if they’ll be consistently good. And that’s especially true when bikes are just their hobby. But full-time firefighter and part-time wrench Chris Scholtka came out the gate swinging—and has been hitting home runs ever since.

Based in Cottbus, southeast of Berlin, Chris operates as a one-man-band under the moniker Motocrew. He’s quickly established a signature style: neo-retro cafe racers with a strong performance angle. And it’s a style that this 2013-model Ducati 848 Evo wears well. 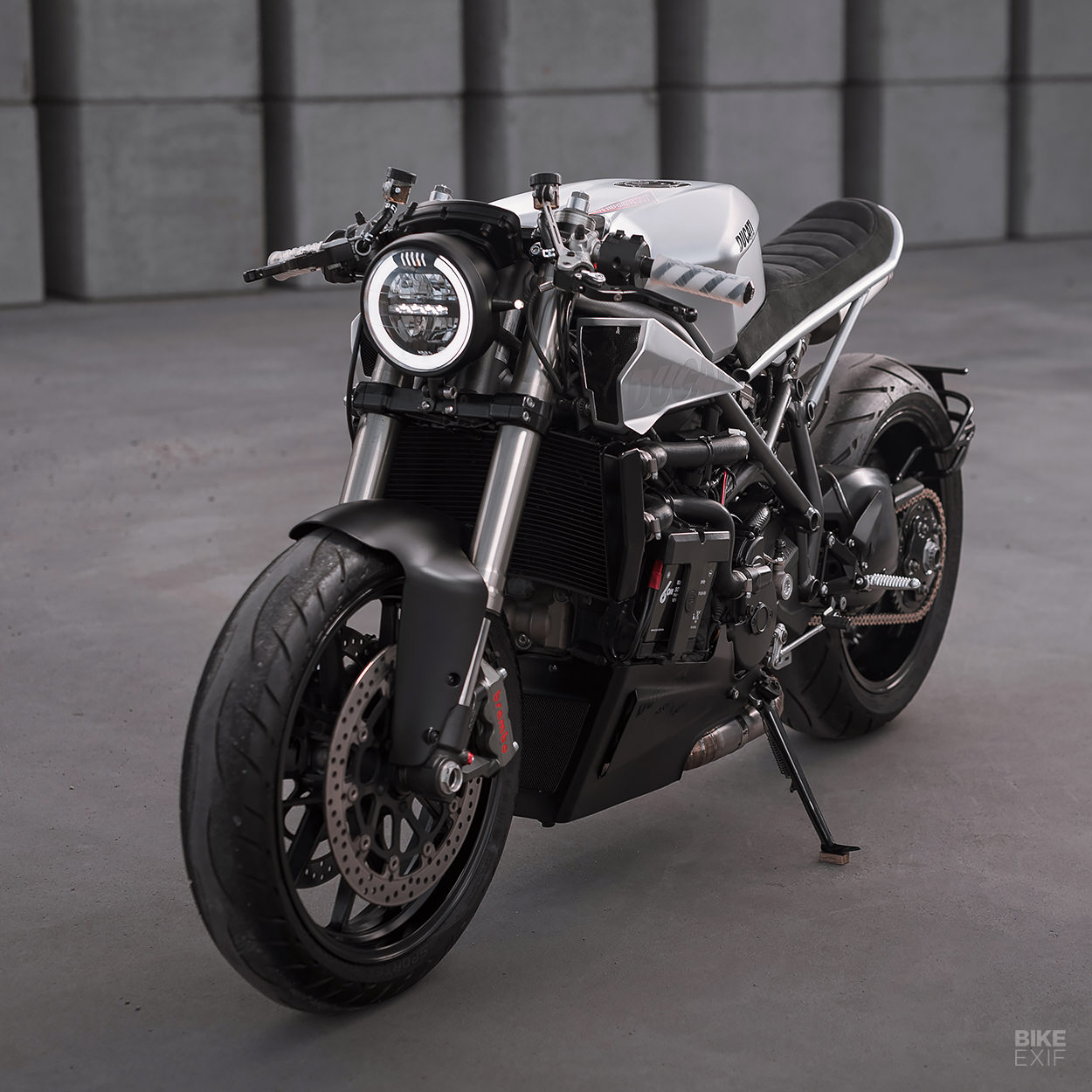 Chris picked the donor bike up from a guy who was using it as a track bike, so it was in less than pristine condition. This was a personal build—his last few projects have been for friends, including a Kawasaki Z550 for his girlfriend. And since he sold his Kawasaki GPZ900R, he hasn’t been able to join her on rides.

“The basic idea,” Chris tells us, “was to bring the bike back into good shape, and make it look like a cafe racer with a lil’ touch of a modern, clean style.” 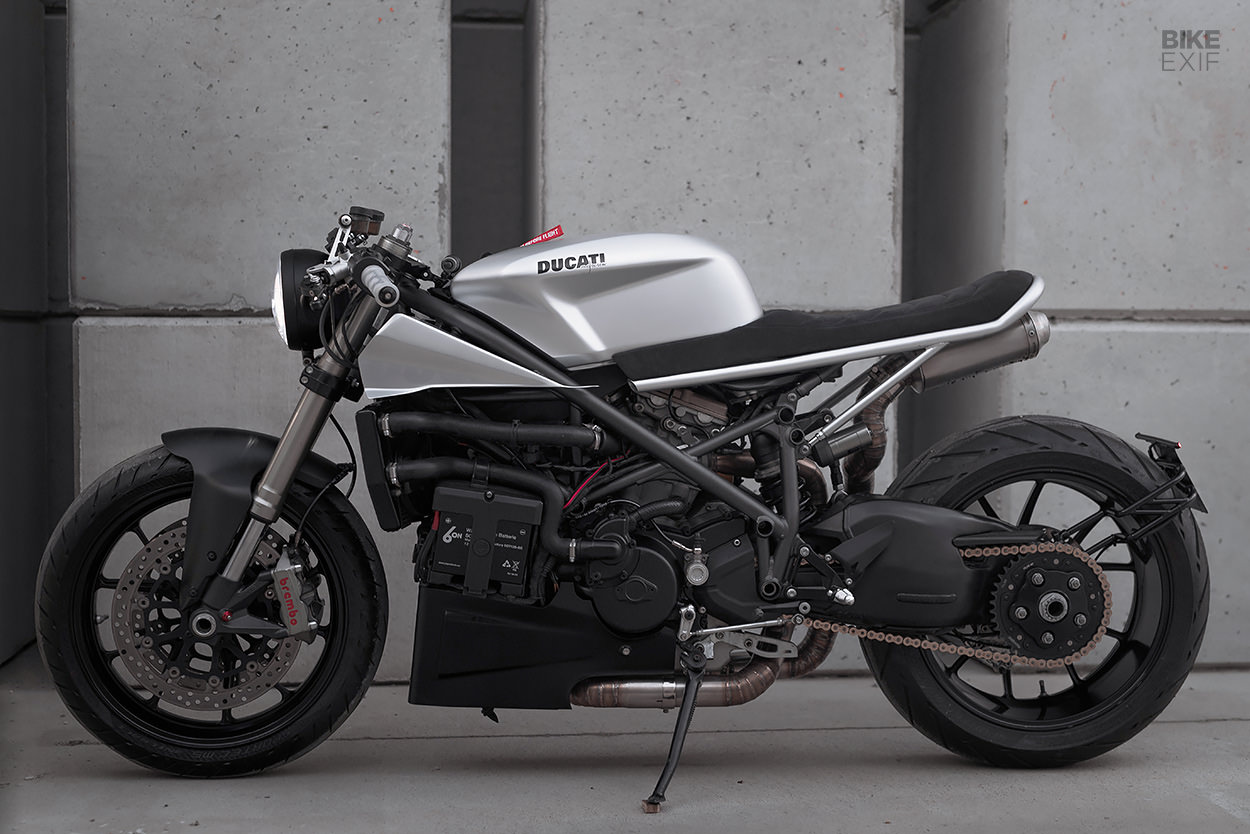 Step one was to perform a comprehensive service on the track-worn Ducati. Then Chris liberated it of its fairings and subframe, and started massaging it into shape.

Taking cues from one of his previous bikes, he welded up a stainless steel subframe with the sides extending all the way to the trellised section of the frame in front. Then he shaped up a seat pan, and had a friend upholster it with Alcantara. The arrangement flanks the stock tank nicely; echoing its lines, but with enough mechanical dissonance to give it an aggressive vibe. 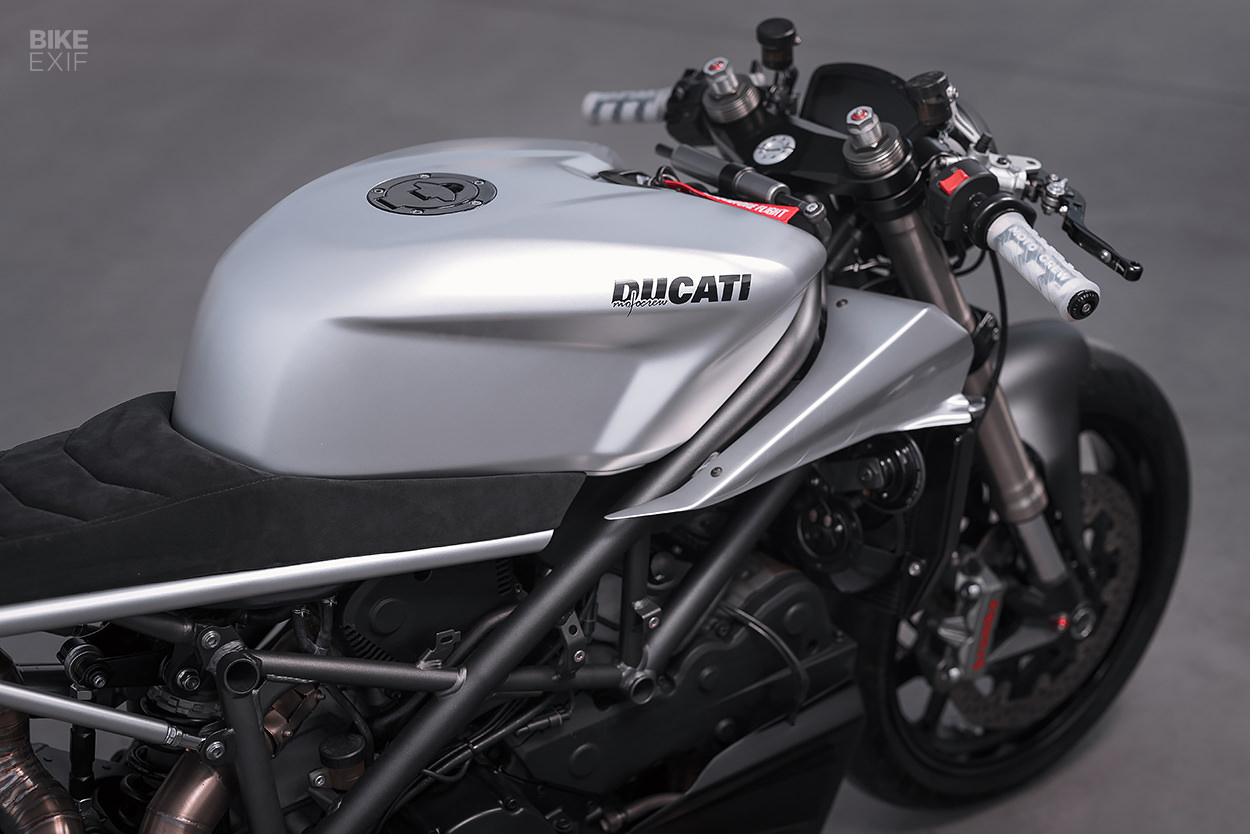 Further forward is a pair of air intakes to tie the design together. Chris fabricated them from steel, then built a chunky belly pan lower down to conceal the electronics that were originally hiding behind the fairing. The OEM front fender’s still in play, but it’s been refinished in black. 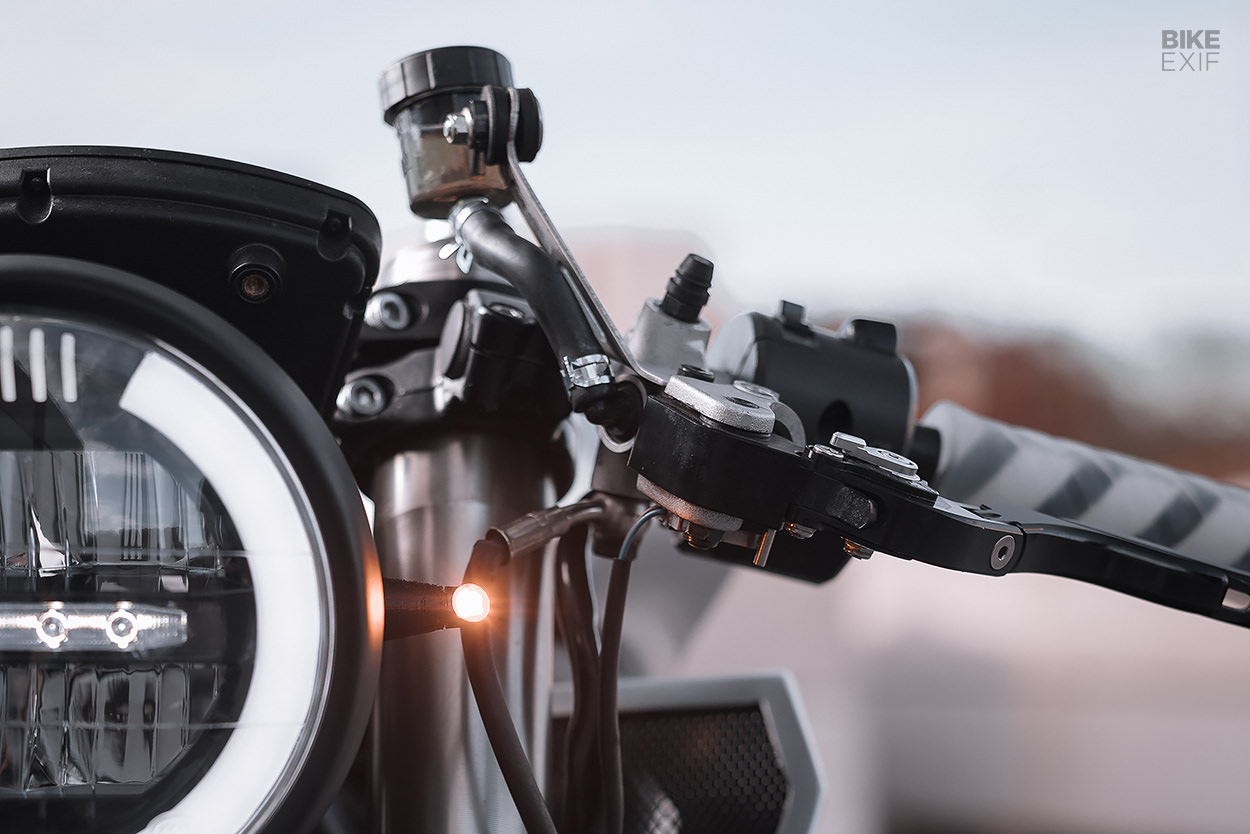 The 848 has all the bits to keep it street legal, but Chris worked hard to keep them subtle. There’s a round LED headlight up front, along with a pair of tiny LED turn signals. Further back are the stock clip-ons and controls, with a pair of Hookie Co.’s translucent ‘Frozen’ grips over Motocrew graphics.

The rear signals are LEDs that double up as taillights. They’re mounted to a custom-made license plate bracket, constructed from bent tubes and CNC-machined bits. And the way the whole part wraps around the Ducati’s single-sided rear wheel is uber-clean. 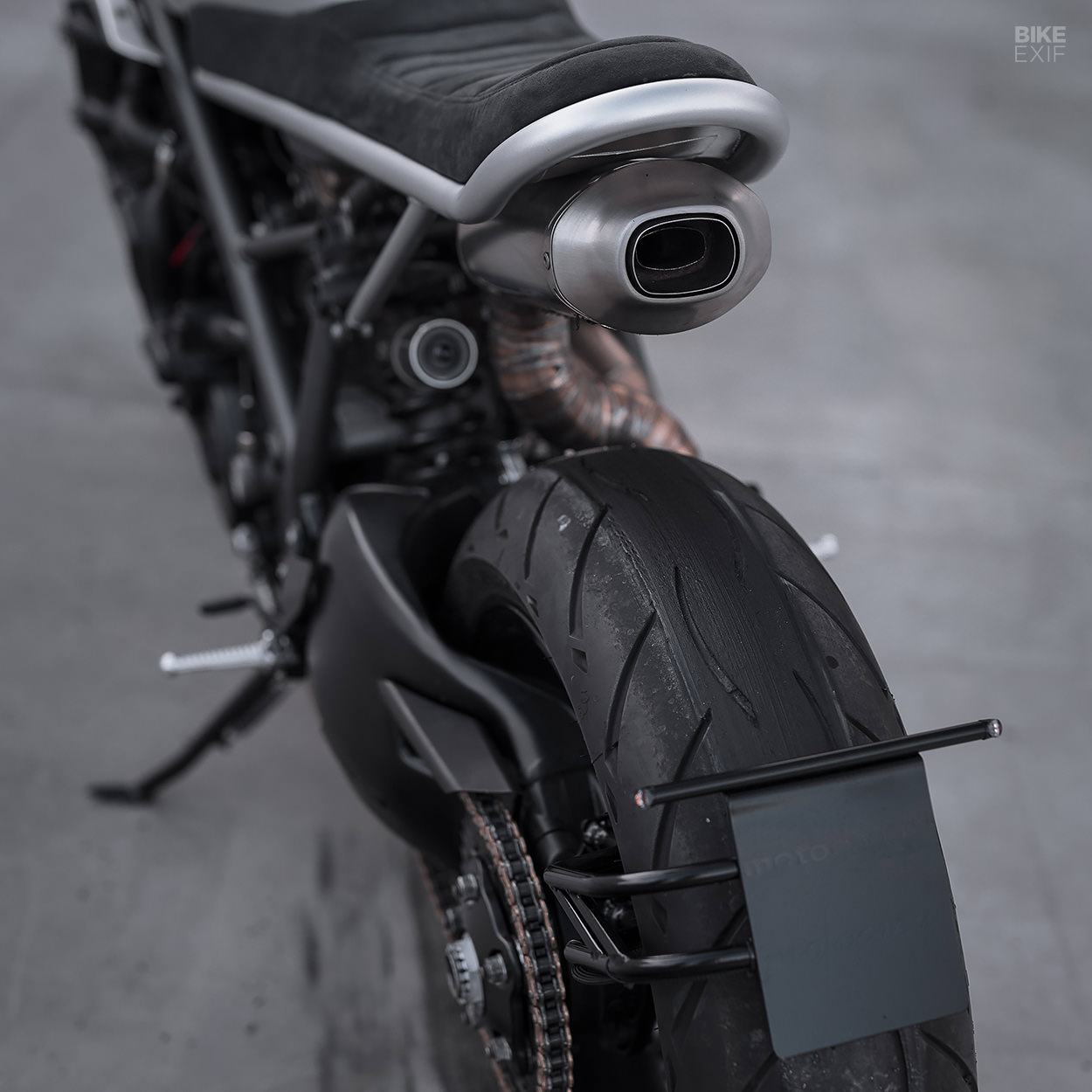 Chris is particularly proud of the exhaust—a two-into-one stainless steel system with 78 pie-cut sections. The muffler is one of the original two units that’s been cut and shut to shorten it, and remounted under the new seat. There’s a layer of heat-resistant aluminum tape under the tail, to keep things from getting too toasty. 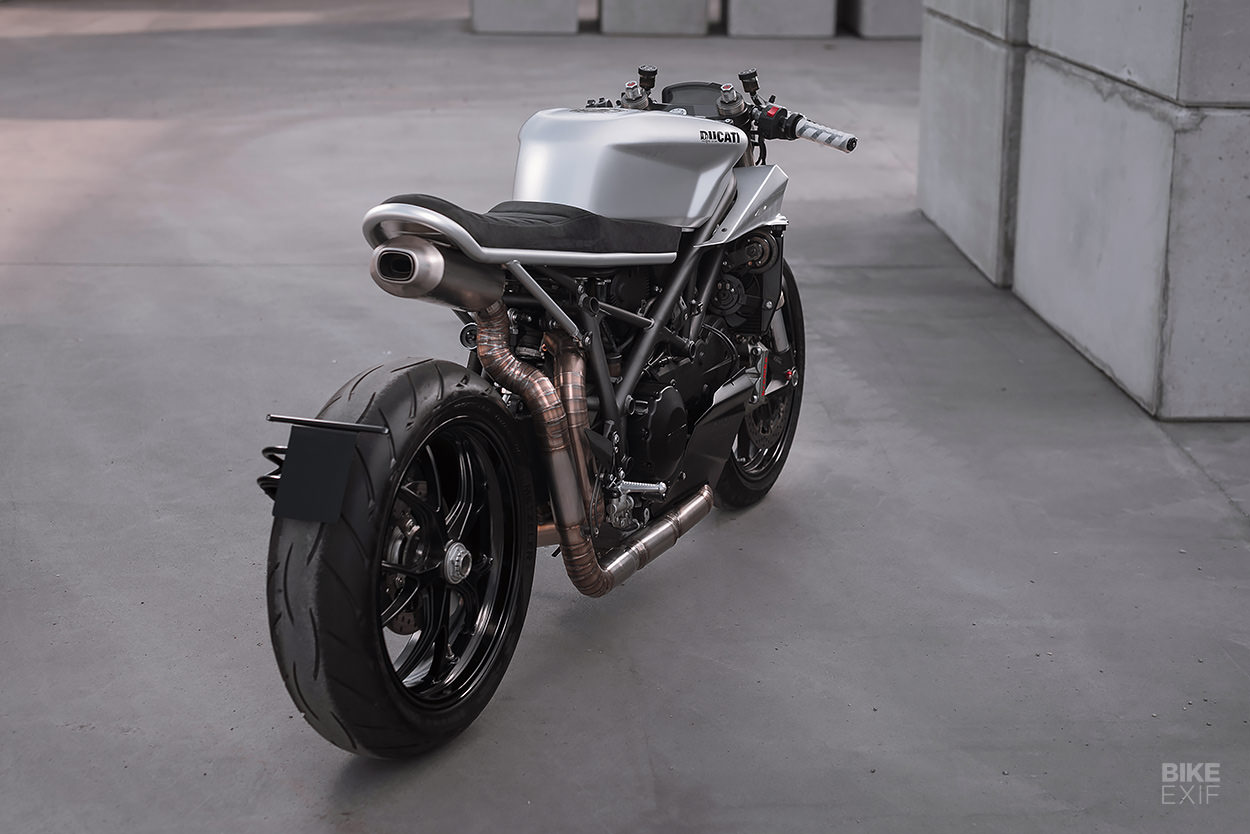 The Ducati’s new paint code came from a unique source; it’s the matte silver you’ll find on the mirrors of certain Audi ‘S’ models. Everything up top wears it, while the lower half of the bike is predominantly black, accentuating this modern cafe racer’s poised stance.

As for performance mods… there aren’t any. The 848 Evo already makes 140 hp out the box, and has Showa forks, an Öhlins shock, Brembo brakes, and relatively light wheels. 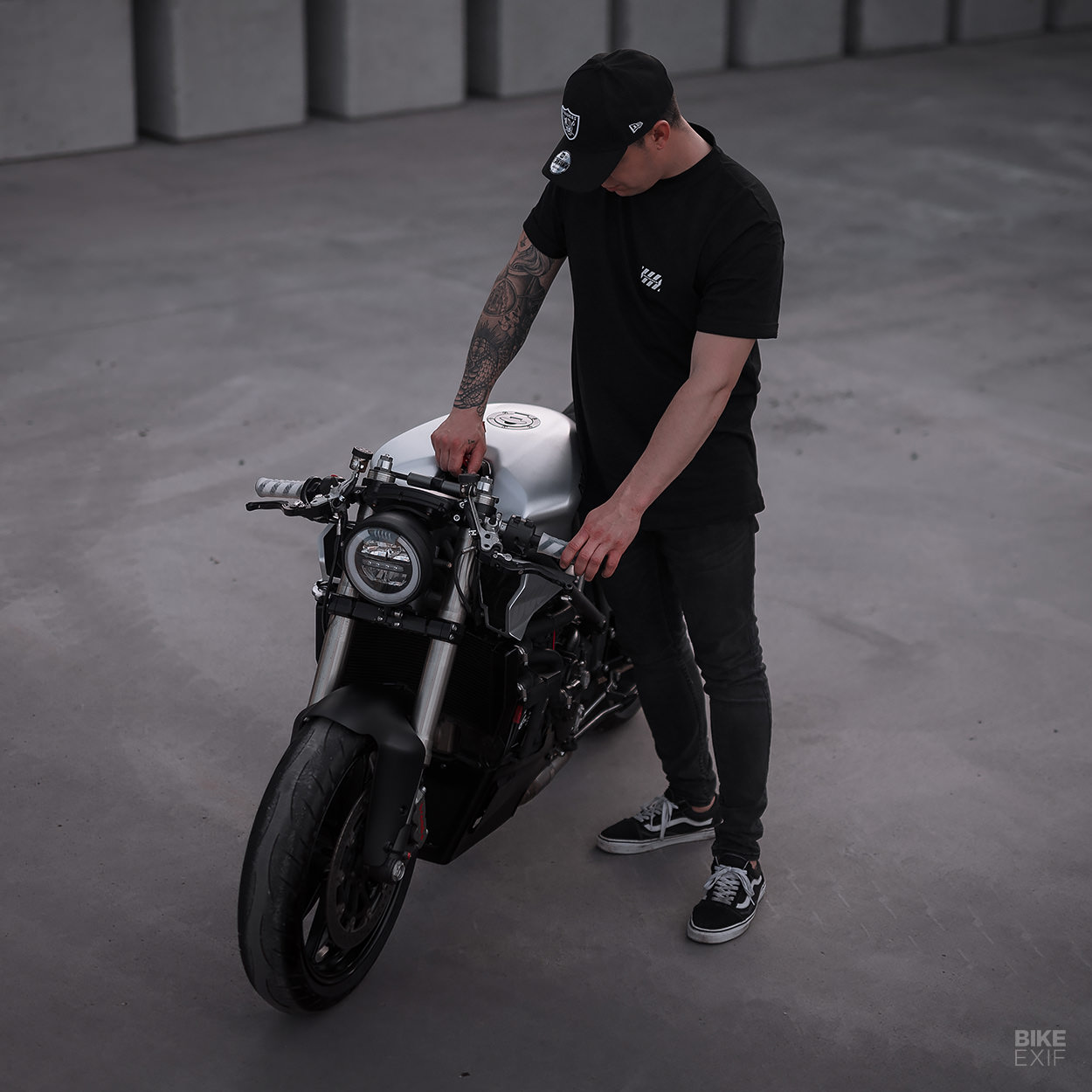 Chris is planning to add a quick-shifter soon, but ultimately this is a budget build, since he’s also smack bang in the middle of building a new house.

The good news? The house will have a 45 square meter workshop in it with two bike lifts. And that means there’s a lot more Motocrew goodness to come. 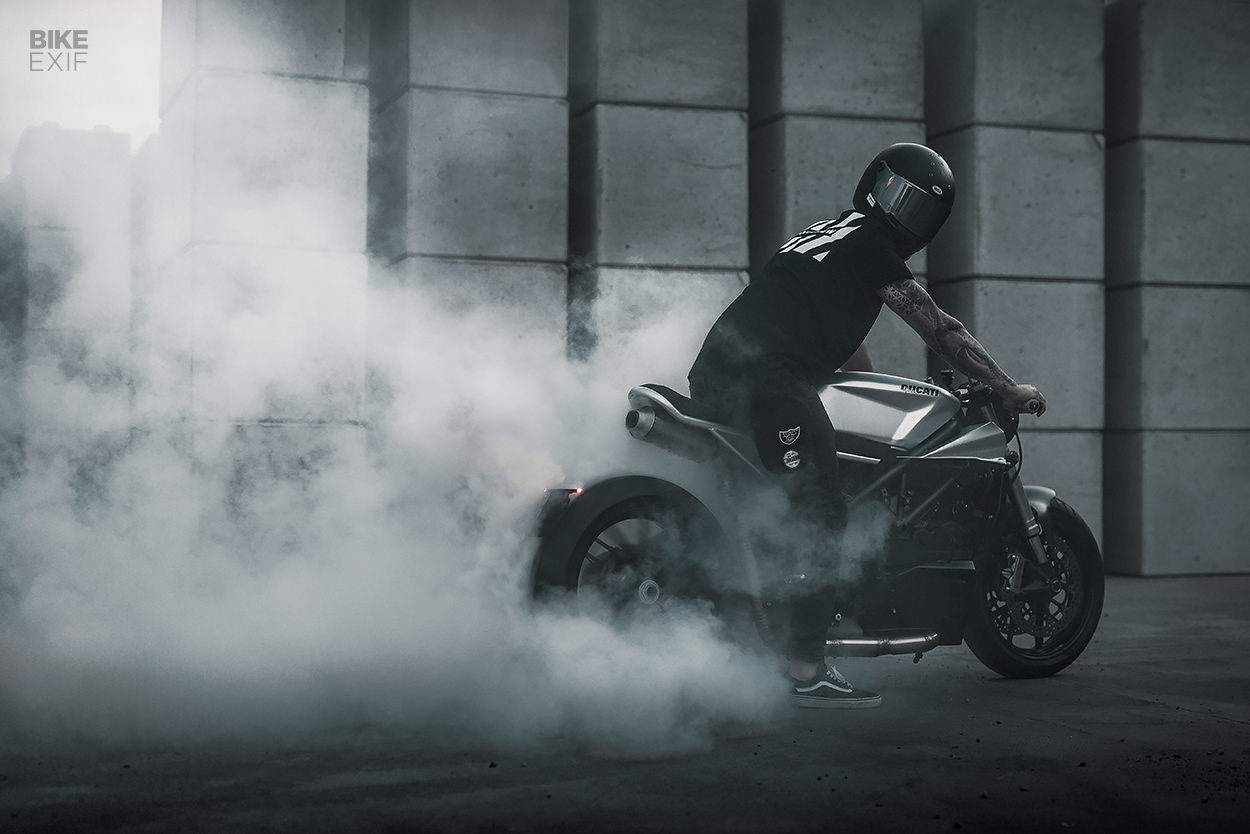