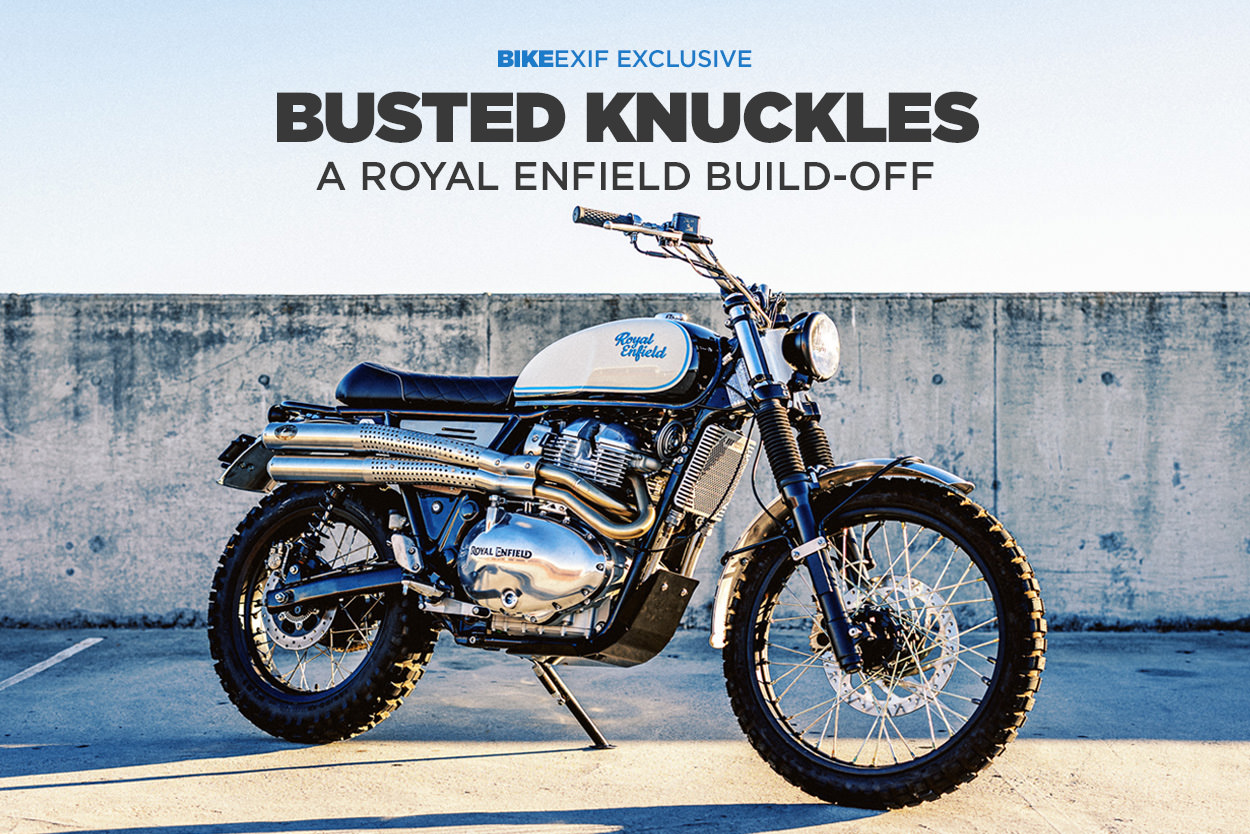 Royal Enfield are adamant that their Interceptor and Continental GT 650 models are ripe for customization. And so far, we’ve seen plenty of proof from some of the world’s best bike builders.

To push their point even further, Royal Enfield has just held their second Busted Knuckles build-off. Five Royal Enfield dealers in Australia and New Zealand were each tasked with customizing the 650 twin of their choice, in a no-holds barred custom build contest. Royal Enfield hasn’t picked a winner yet—but they have given us a peek at the entries.

Take a gander, and let us know which one you’d take home. 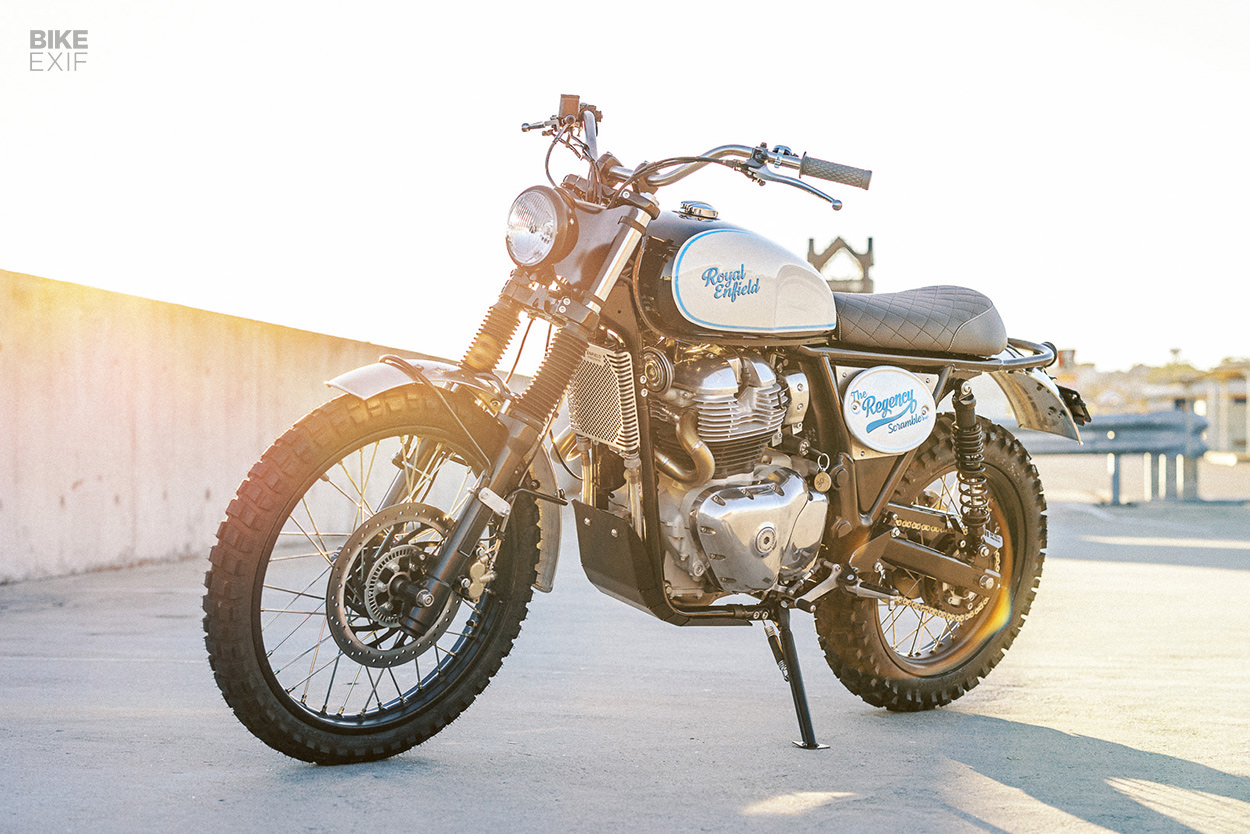 ‘Regency’ by MotoMax The last time MotoMax entered the Busted Knuckles build-off, they built a track-specific race bike. So the Perth shop decided to shuffle the deck this time around, with a scrambler that takes inspiration from the Californian desert sleds of the 60s.

It was an easy decision for shop boss Ric Steele, who adds that he “wanted it to be something that customers could build for themselves, with parts that are off-the-shelf.” But despite Ric’s aspirations to not build anything “too crazy,” MotoMax’s Royal Enfield Interceptor looks incredible, thanks to a well-judged list of parts and mods. 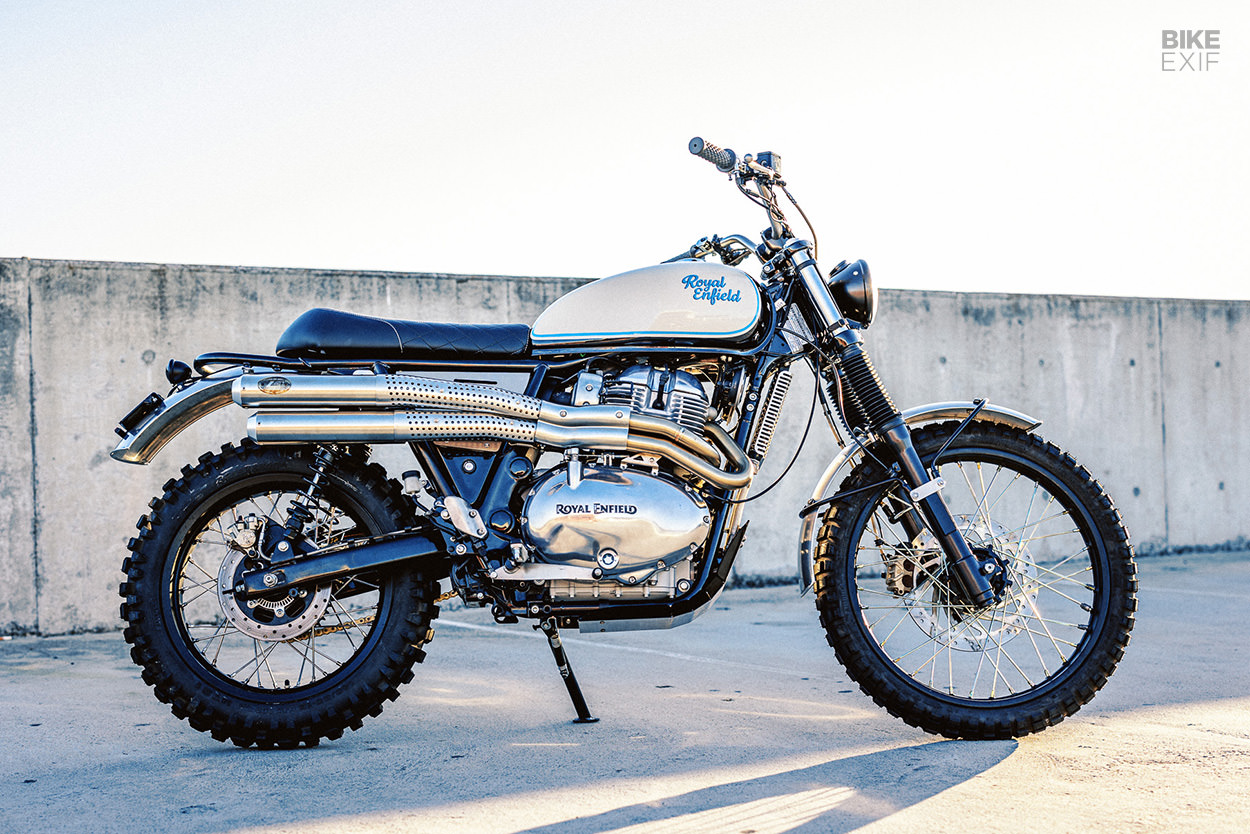 It starts with the front end, which features the forks and 21” front wheel from a Royal Enfield Himalayan. The wheels are blacked-out and wrapped in Pirelli MT-21 knobblies, with a set of YSS shocks propping up the rear.

A few tasteful changes to the bodywork complement the stock Enfield fuel tank. The stubby scrambler-style seat is custom, as are the side covers. The bike’s capped off with generous polished aluminum fenders at both ends. 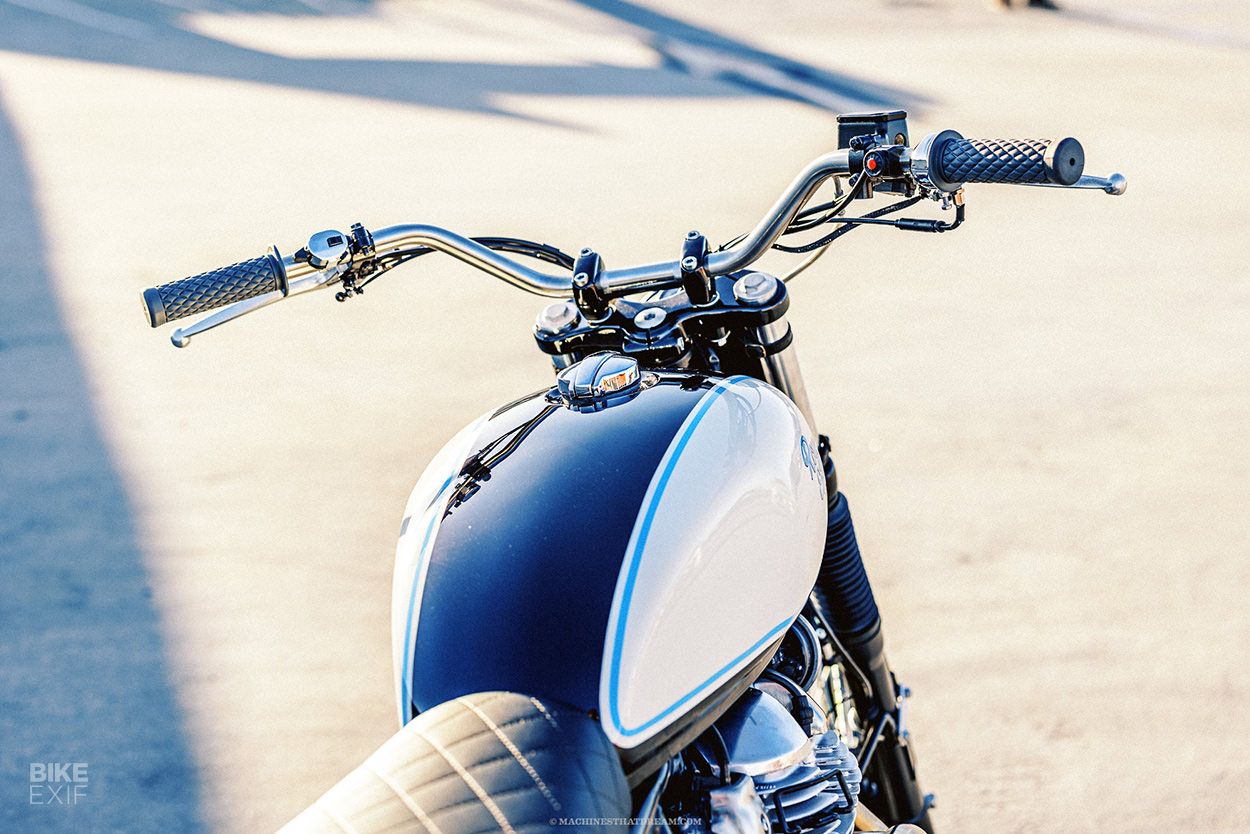 Up in the cockpit you’ll find a wide set of tracker bars, with Biltwell Inc. grips and pared-down switchgear. A Motogadget speedo is embedded in the Bates-style headlight, which sits just in front of a custom number board. There’s a matching taillight out back, and this scrambler even features a license plate bracket and tiny LED turn signals.

Another highlights is the high-riding exhaust system, which terminates in a pair of Zard mufflers. MotoMax also added a sump guard, and a radiator cover and chain guard from Enfield Precision. The simple, yet stunning, paint job was requested by the bike’s new owner, who made an offer to purchase it before it was even finished. 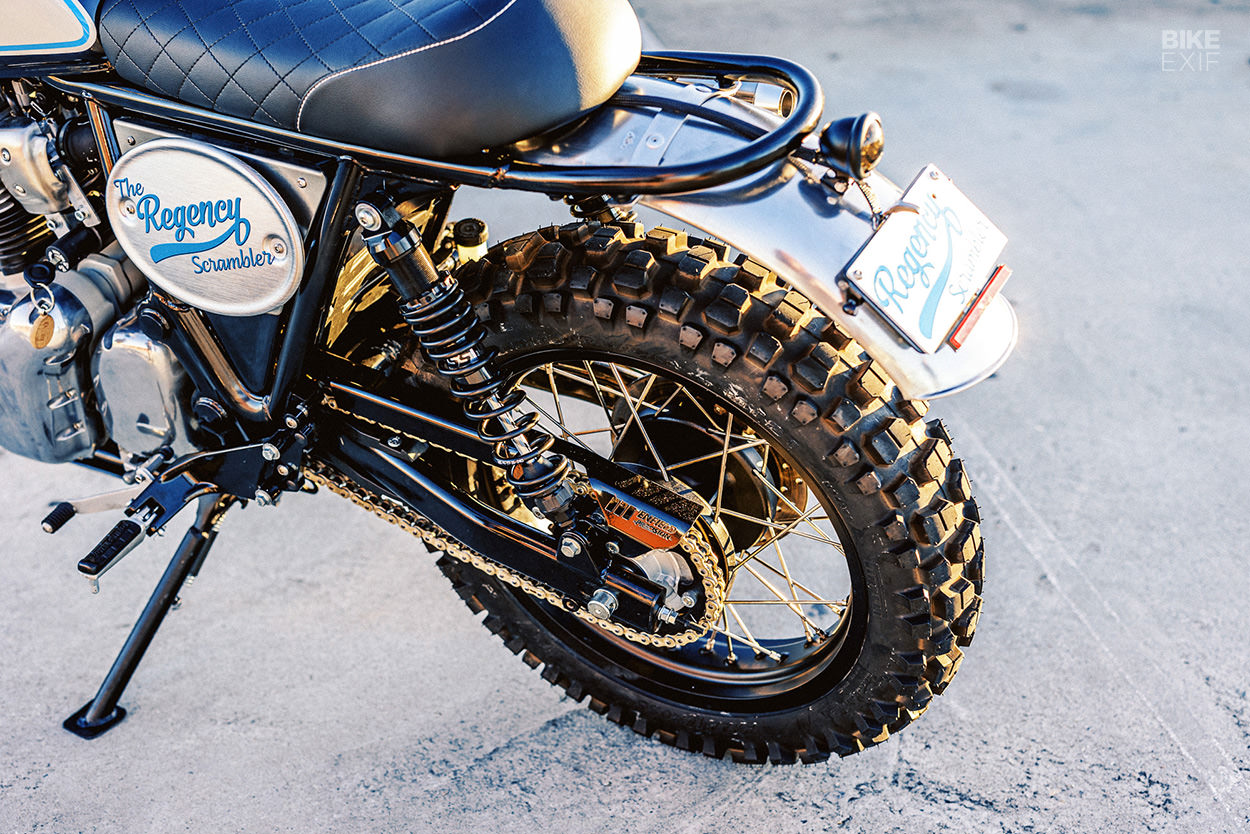 Despite the fact that it’s street legal, Ric assures that this Interceptor is made for hooning in the dirt. “We’ve built plenty of road-biased scramblers in the past,” he says. “This isn’t one of them.”

“It’s a true off-road bike and we want it to get dirty.” 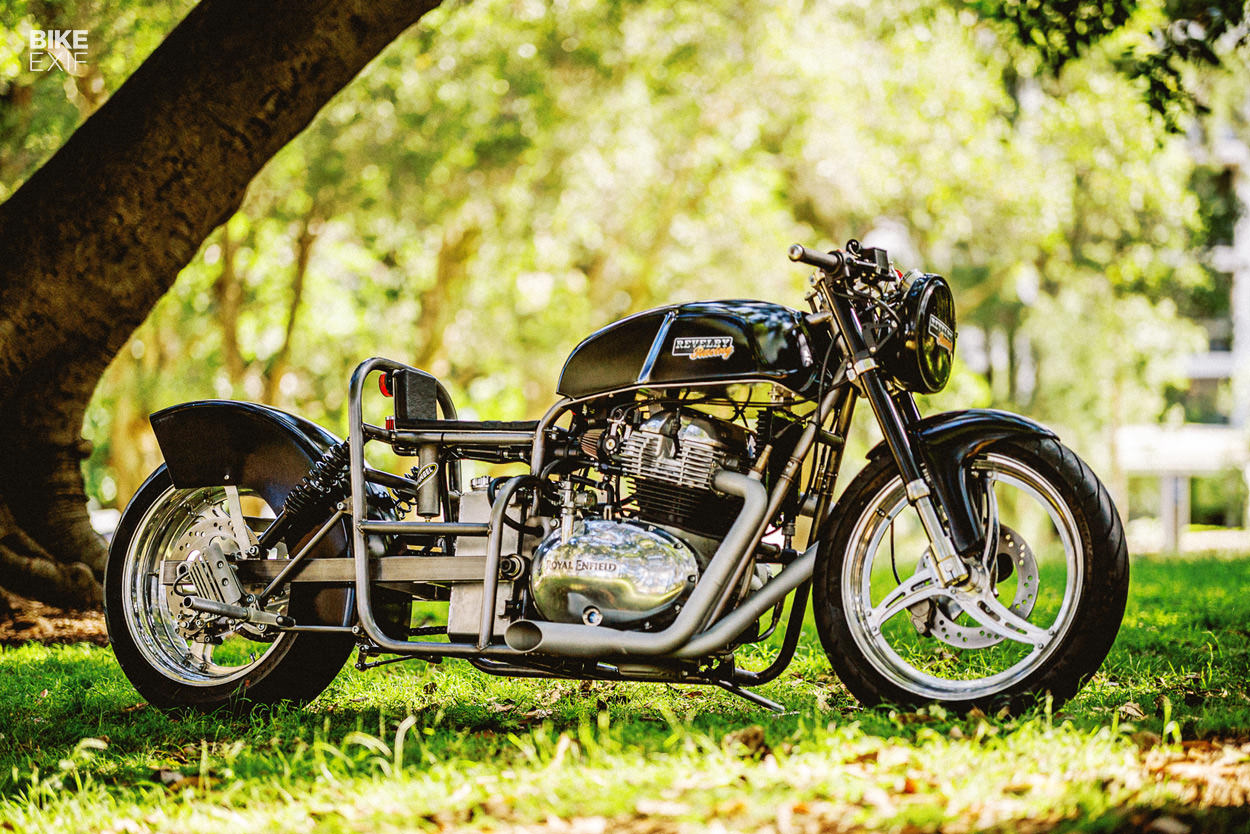 ‘RevElation’ by Revelry Cycles Sydney’s Revelry Cycles is run by the husband and wife team of Will and Santina Keith, and they know how to build motorcycles that go fast. The shop has a vast portfolio of custom builds—including a recently-built 10 second Royal Enfield drag bike, which, in a way, inspired this project.

“From that build we realized that the 650 motor is totally over engineered,” says Will. “For a bike that’s so user-friendly and has such a broad appeal for so many riders, it has a forged crank and an incredible robustness, too. We’ve done some crazy things with it and we’re yet to find its limits.” 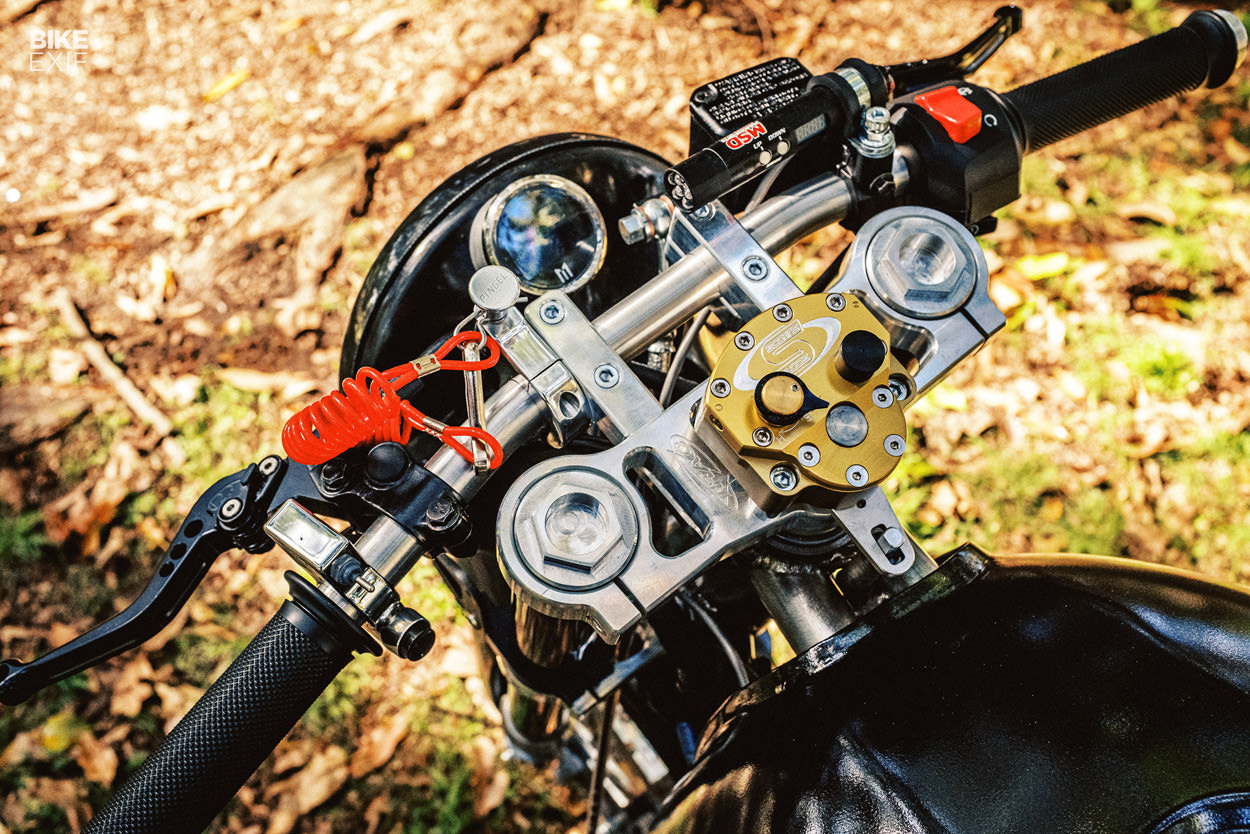 With that thought in mind, Revelry Cycles set out to turn the Royal Enfield 650 Twin into a pukka salt racer. A daunting task, but as Will puts it: “How do you eat an elephant? One piece at a time, that’s how.”

Step one was to 3D model as much of the bike as possible, to make sure it would fit Santina perfectly. That’s right—she’ll eventually be piloting this down a salt pan. “I think of it as a token of Will’s affection,” she says. “It’s like a love letter in metal.” 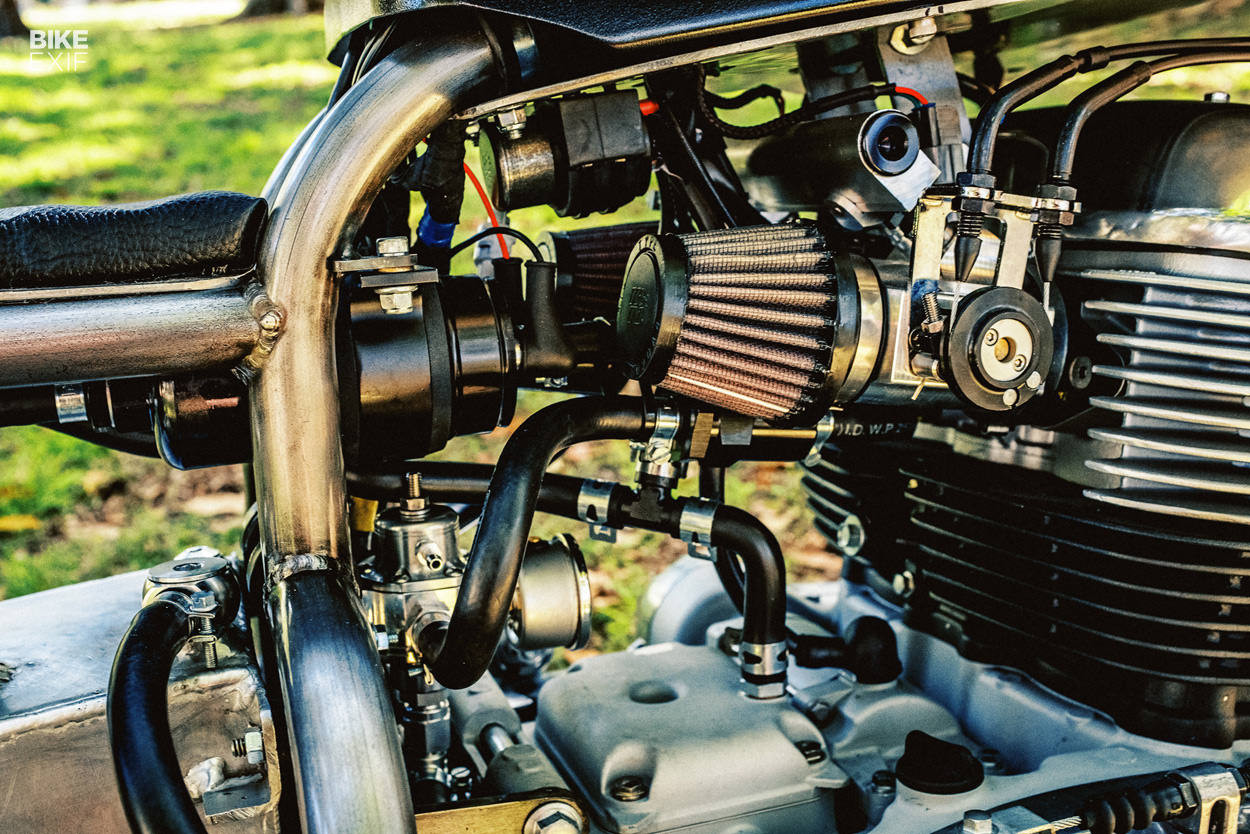 The Enfield’s low slung stance, custom frame and extreme ergonomics are all designed for going fast in a straight line. It has an engine to match too; Will’s not keen to disclose every detail, but we do know that it’s been bumped to 960 cc with an S&S Cycle big-bore kit and an upgraded crank. Revelry also built their own throttle body setup, along with a pneumatic shifter. 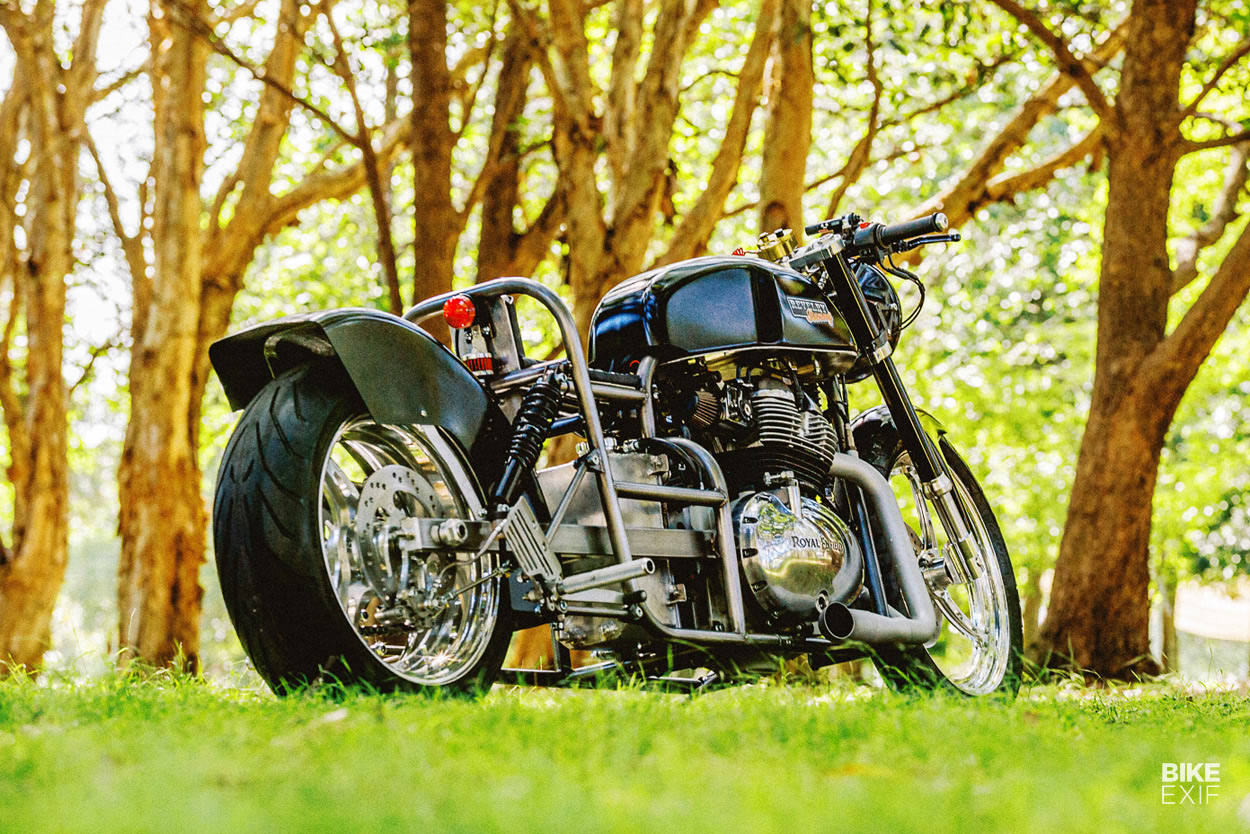 It also features a deafening free-flowing two-into-one exhaust, and nitrous, obviously. There’s a lot to digest here, from the stretched swingarm to the chunk rear fender. But the big takeaway is that this bike is all about function.

Revelry didn’t just build it for Busted Knuckles fame either. They’ll be making a play for the Australian land speed record, as soon as the opportunity presents itself. 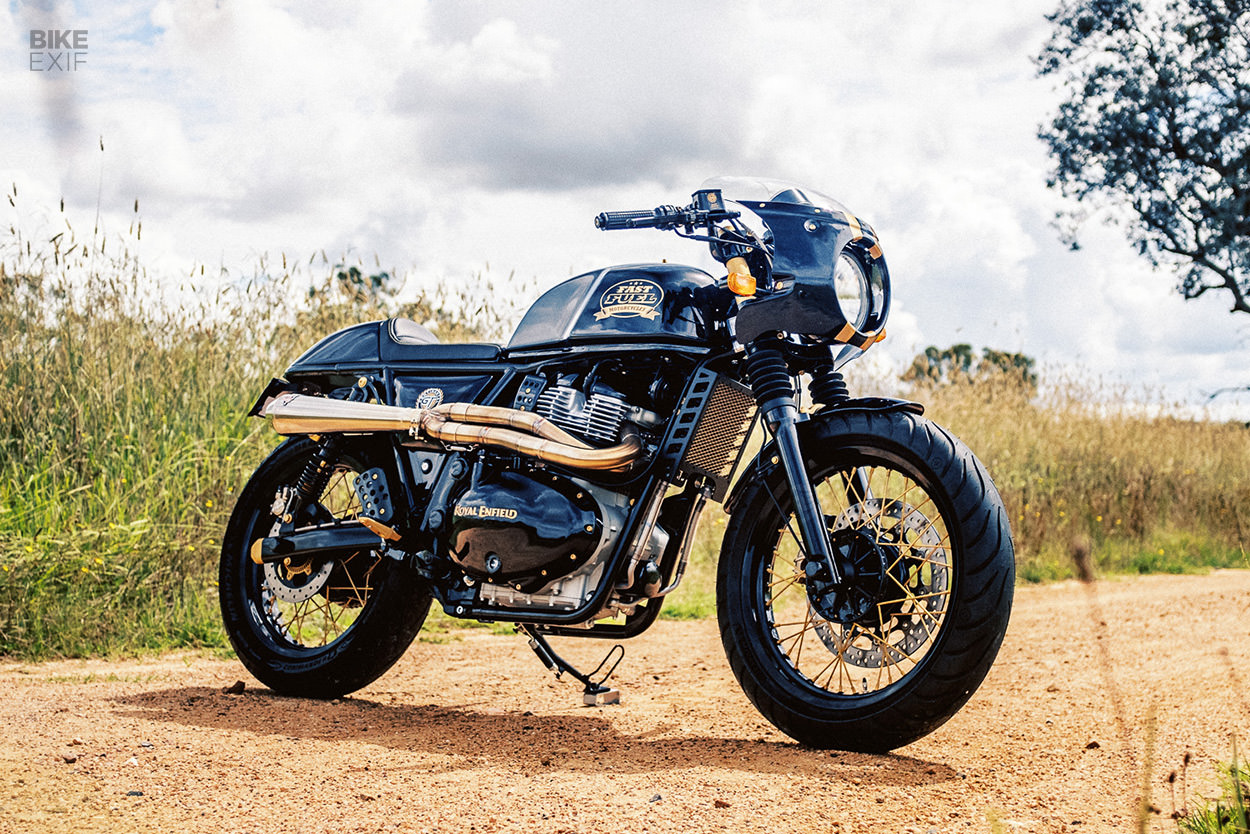 ‘Dr. No’ by Fast Fuel Fast Fuel in Albury, New South Wales picked the Continental GT 650 for their build, opting to amplify its out-the-box café racer styling. It was a good move, too—their Busted Knuckles entry might not break any new visual ground, but it’s a neat example of the genre.

The shop started with a bolt-on fairing and tail from C-Racer in Greece, then tweaked the latter to suit their vision. “It had a brake light incorporated into the tail piece,” says shop owner Lincoln Smart, “but we really wanted that to be sleek. So we modded the plastic to get that minimal look we were going for.” 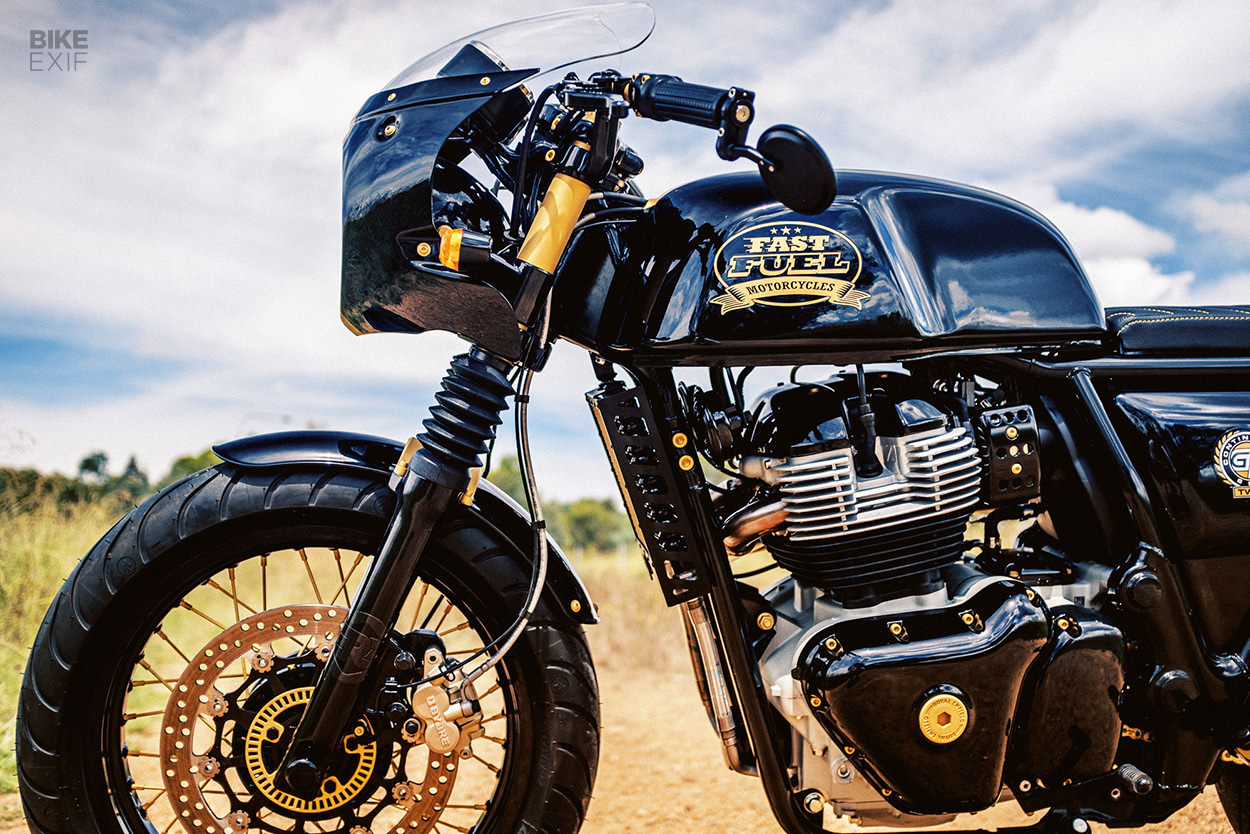 The Continental GT come with clip-ons fitted, so there wasn’t much work to do in the cockpit. Fast Fuel simply swapped the stock trimmings out for a set of Motogadget grips and switches, and installed bar-end mirrors. Instead of the tiny LEDs we’re used to seeing on builds, the crew fitted bigger, square turn signals up front, giving the bike a neat 70s vibe. 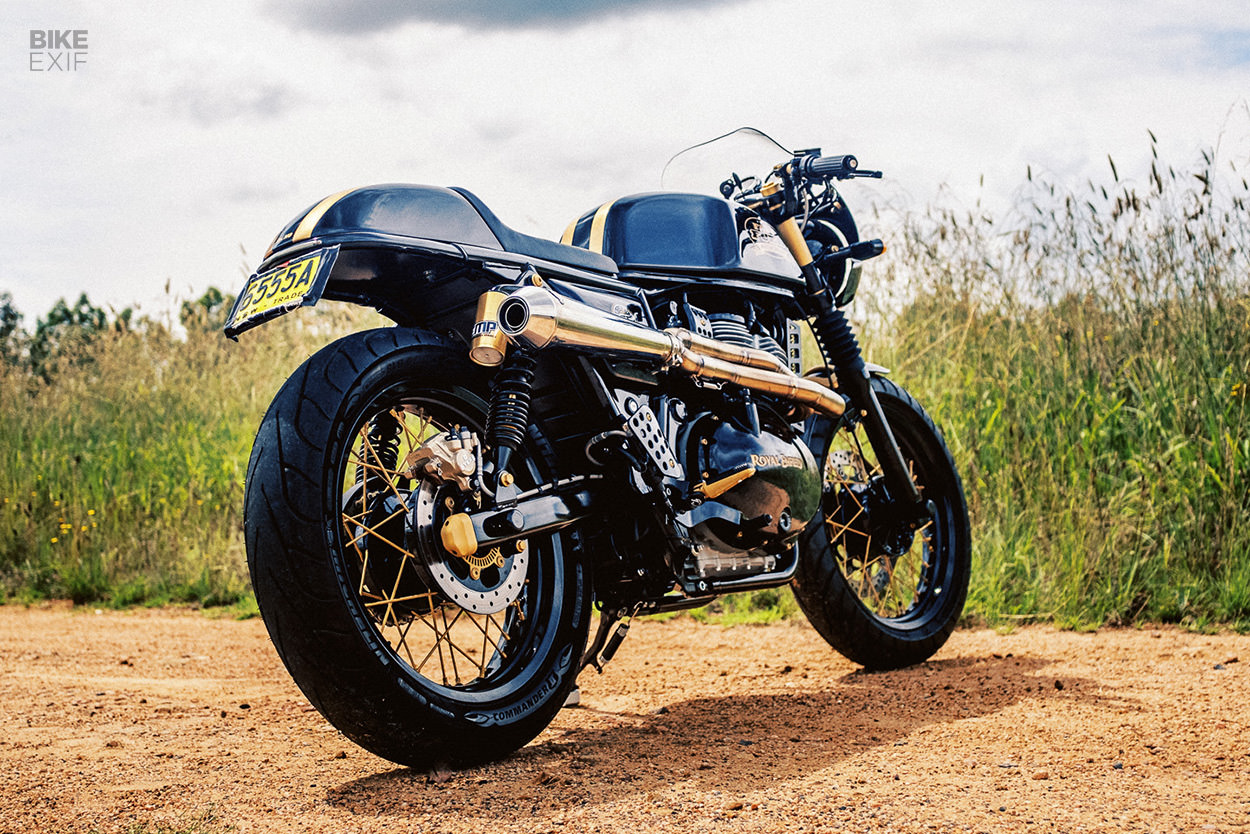 For the exhaust, Lincoln originally envisioned a set of low-slung drag pipes. But when he pitched the idea to local exhaust company Lextek, they suggested something a little more unique. This high-mounted two-into-one system was the result—and it reportedly sounds mad, too.

Lincoln’s biggest concern was getting the finishes just right. “I wanted it to be done using modern coatings, but in classic 1970s colors,” he says. So he roped in Mitch at 74 Works to treat a number of parts with a gold Cerakote finish, with the rest of the bike done in black—a classic combo. 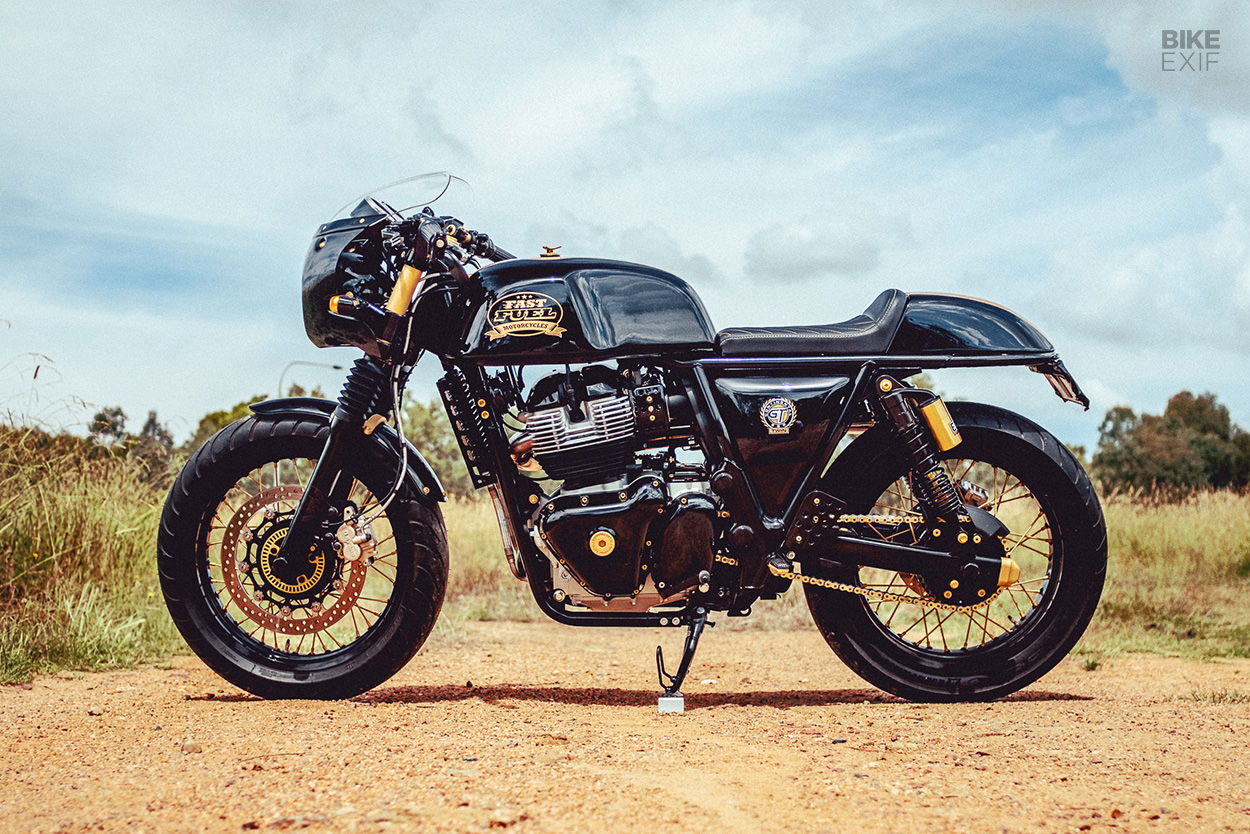 “I hope that it inspires people to customize their own 650s,” adds Lincoln. “Nothing we’ve done here is really rocket surgery; we kept that in mind to make sure people could do something similar themselves.” 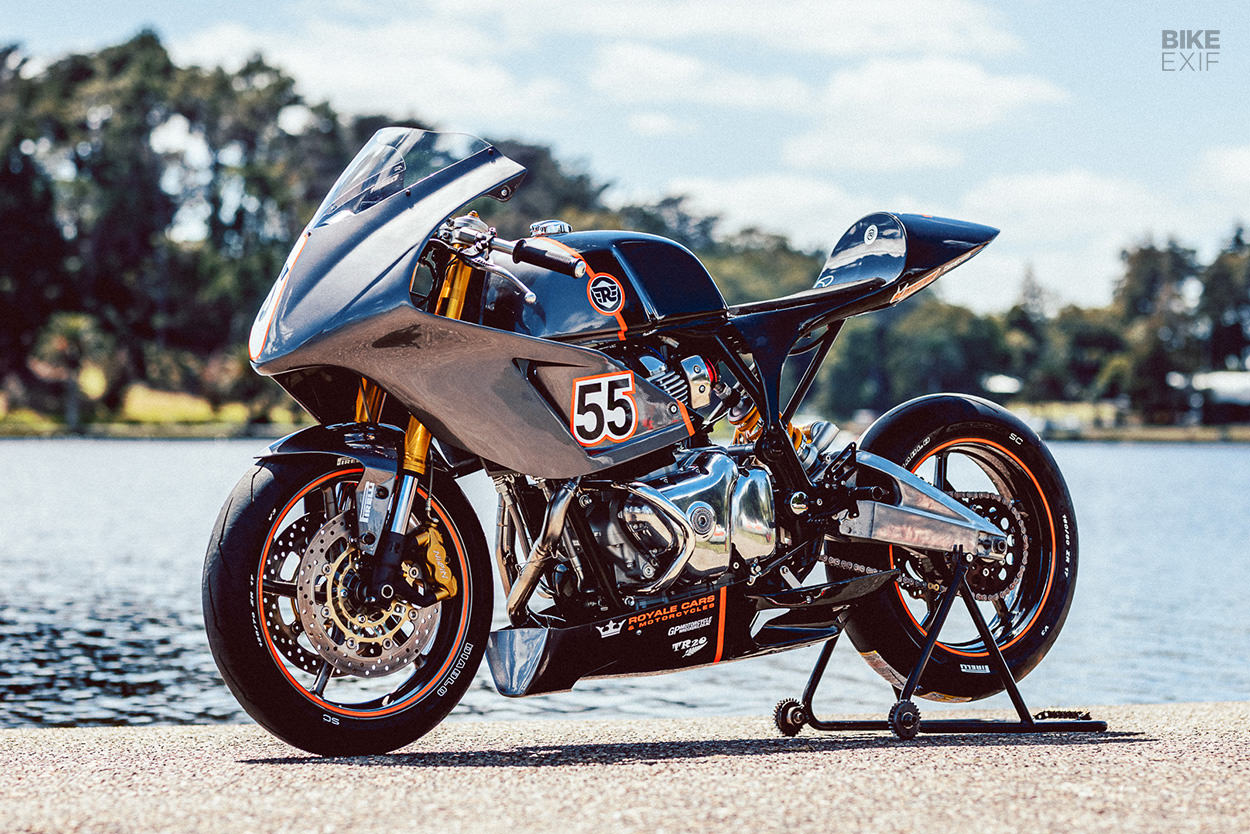 ‘No. 55’ by Royale Motorcycles This Hamilton, New Zealand shop also customized a Continental GT 650 for the contest. But they took theirs to the extreme, turning the GT into something resembling a production race bike. And frankly, it’s totally bonkers.

“It was all about doing something very different,” says the shop’s resident talking head, Dylan. “We kind of went a little crazy. Mainly because we didn’t want to build another café racer, bobber or tracker.” 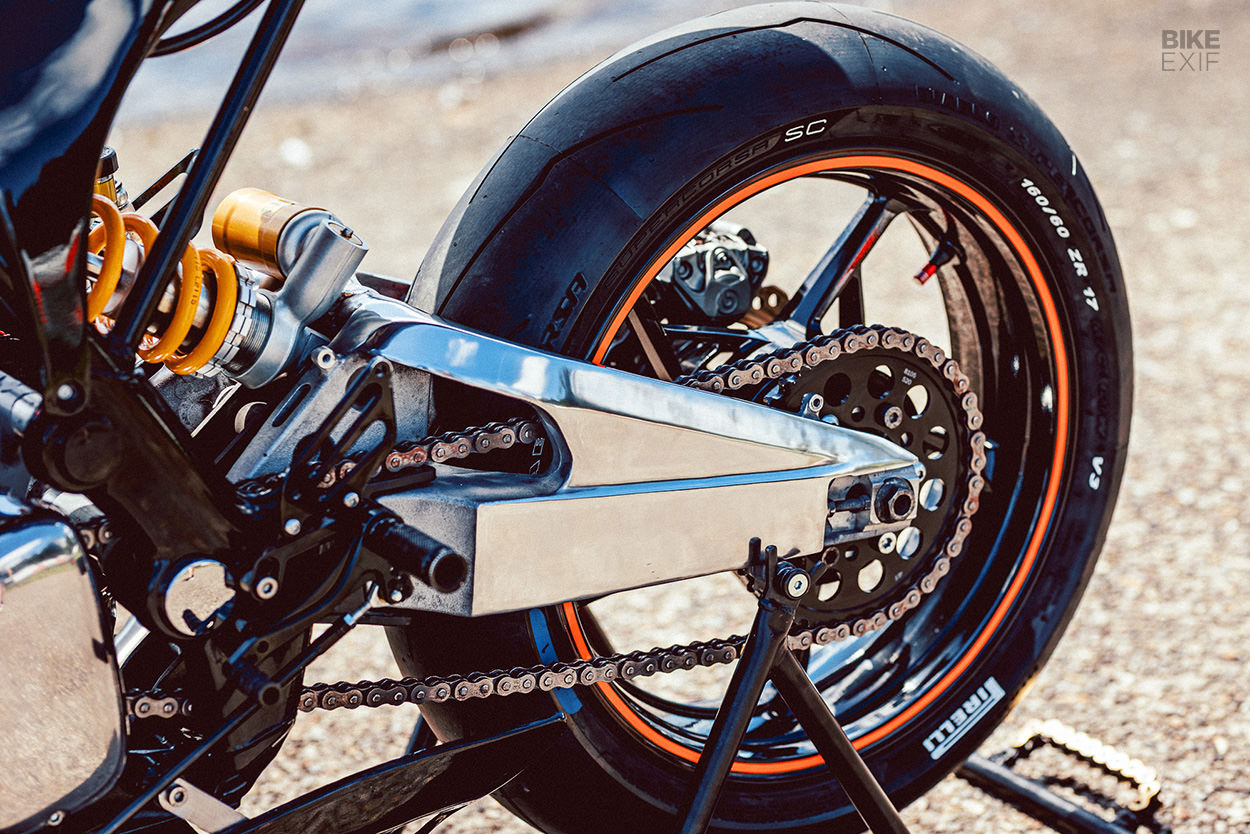 The team sourced a number of parts from various other bikes to piece this sharp racer together. The front forks, wheel and twin Nissin brakes were lifted from a Triumph Daytona. There’s another scalped alloy wheel out back, complete with a Brembo caliper.

Royale also ditched the classic twin-shock setup at the back for a monoshock system. It uses the modified alloy swingarm from an old Honda of undisclosed origin, hooked up to an Öhlins shock. The tires are grippy Pirelli Diablo numbers. 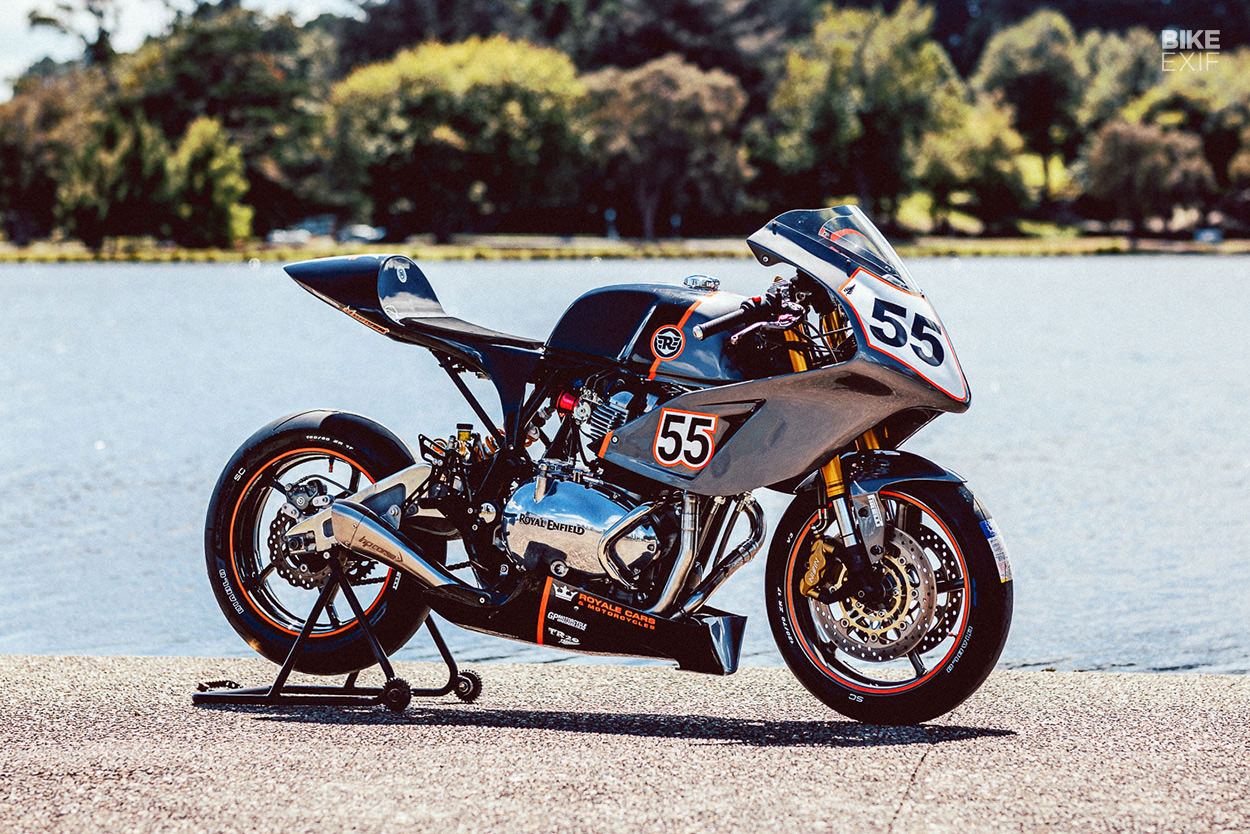 Then there’s the Enfield’s sharp new bodywork. The fuel tank is stock, but the fairing, tail section, front fender and bellypan all sport contemporary designs.

Other tweaks include a custom subframe, crash bars for the engine, and an airbox delete. Royale also installed new rear-sets, clip-ons and levers, then removed all the street legal bits they didn’t need—along with half of the switches. 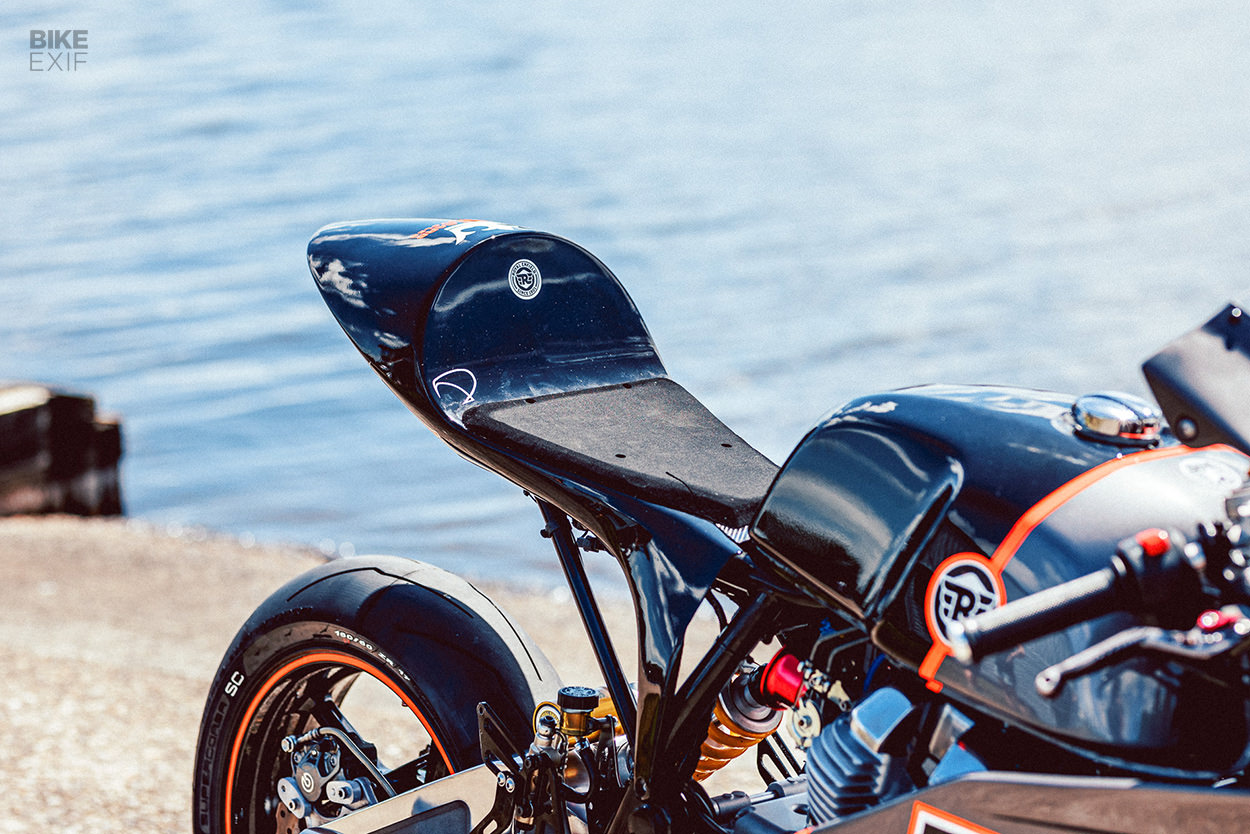 The sultry black and grey livery is somehow both modern and classic at the same time, punctuated by the polished engine and swingarm. The exhaust system is equally tasty, with custom headers flowing into HP Corse silencers. It’s an intriguing mix of parts that shouldn’t work—but it does, beautifully. 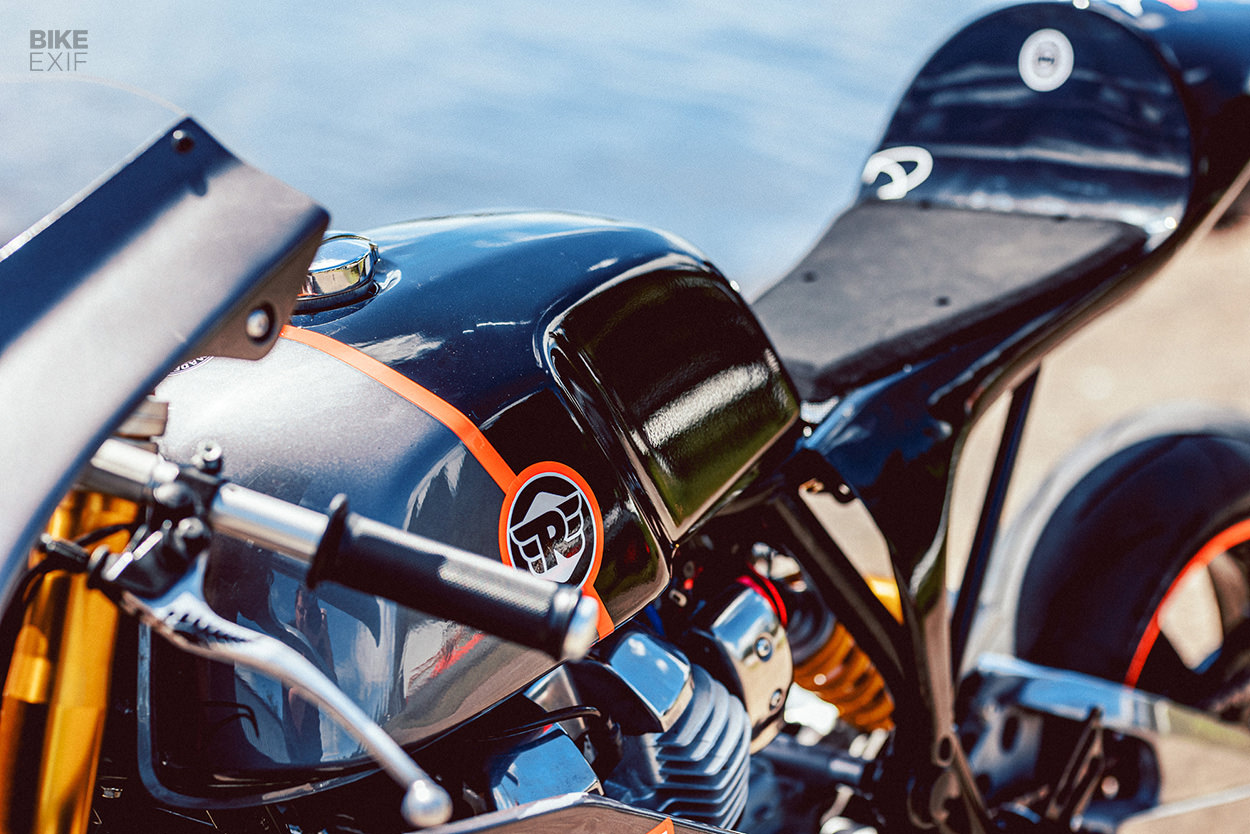 Royale also assures us that their radical reimagining of the Royal Enfield twin hasn’t wrecked its usability one bit. Extra care was taken to make sure that the final geometry was just right—and it has enough adjustable bits now to be tailored to any rider. 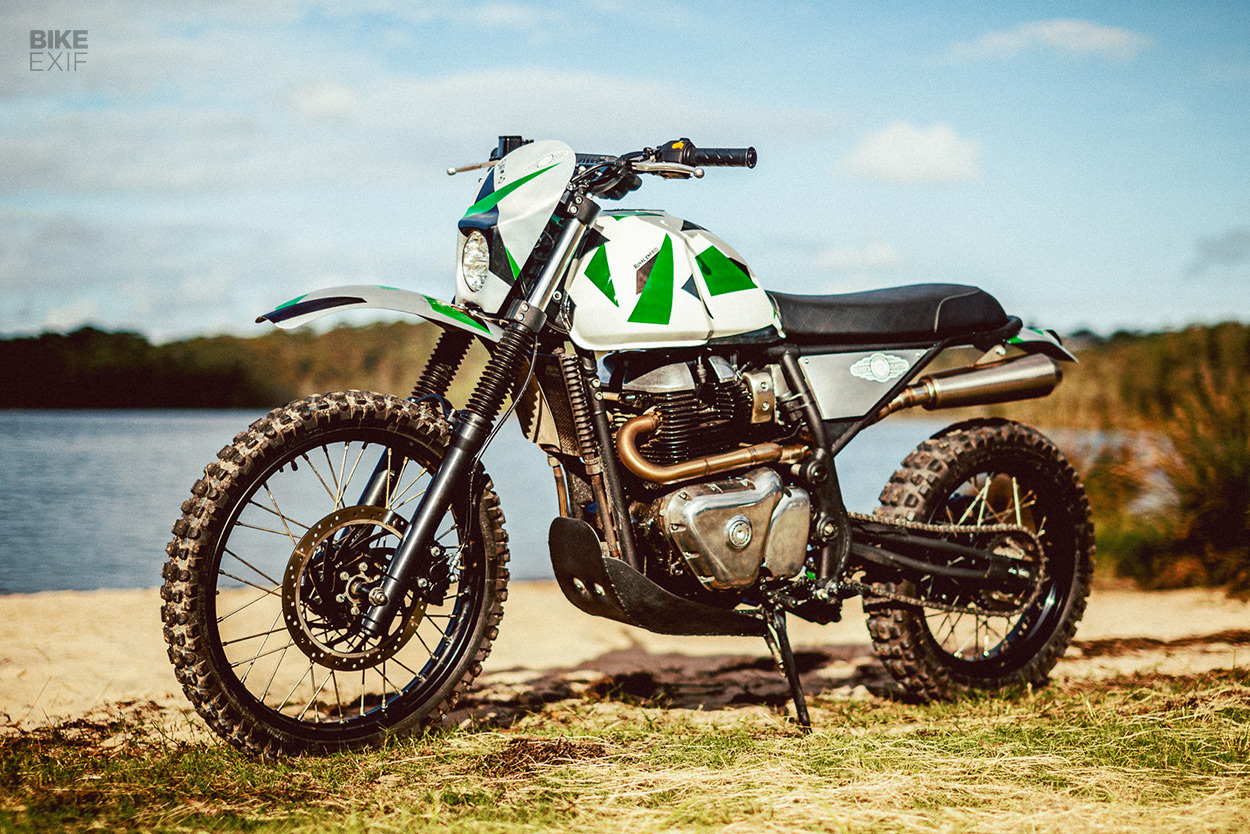 SurfSide’s in-house custom builder, Trevor Love, recently teamed up with German transplant, Tomy Thöring (of Schlachtwerk fame) to handle the shop’s custom work. But when the Busted Knuckles contest rolled around, Trevor’s plate was full. So he handed this one over to Tommy and told him to “go big.” 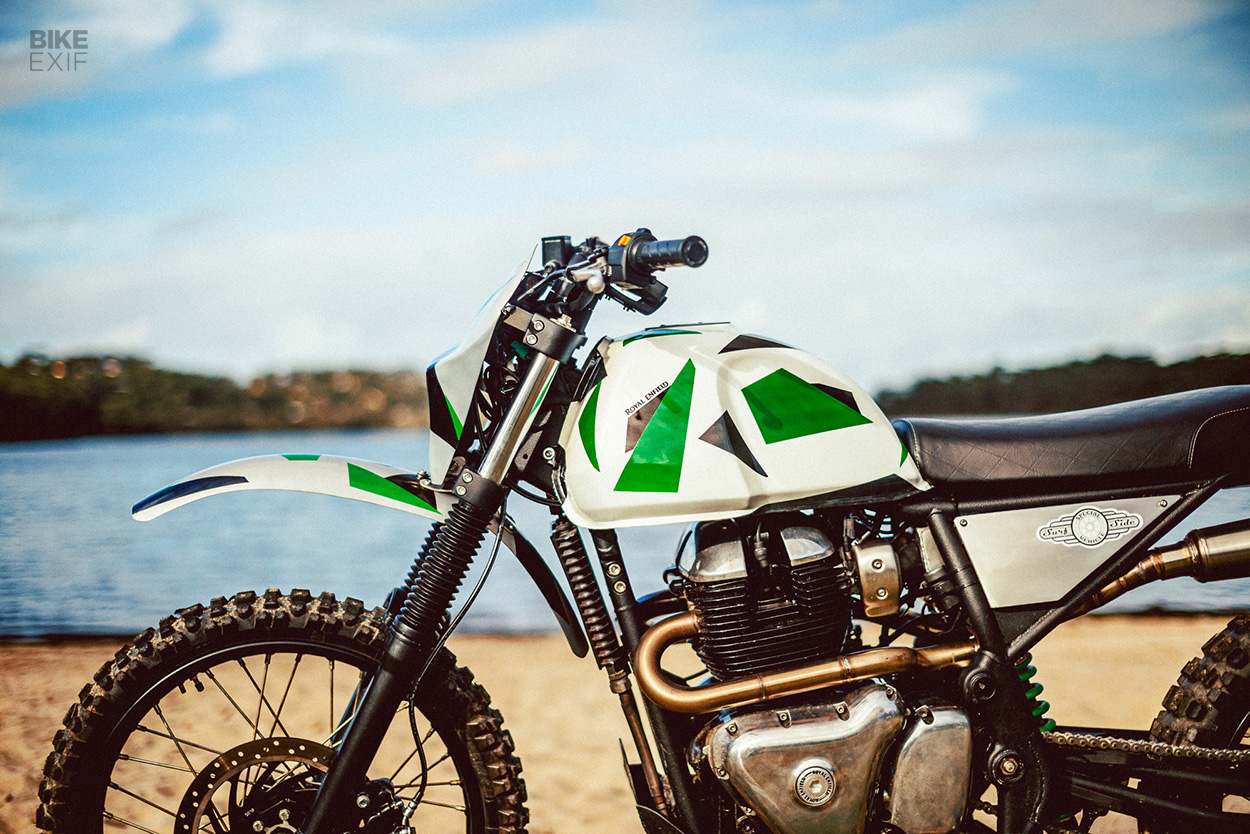 Tommy was all too happy to oblige. “I wanted to take all the best parts of the Himalayan and the 650 and mash them together,” he says. “The Himalayan itself is a great bike for going pretty much anywhere.

“But for someone with plenty of off road experience, it might be a little too gentle. So what if you were to triple the power?” 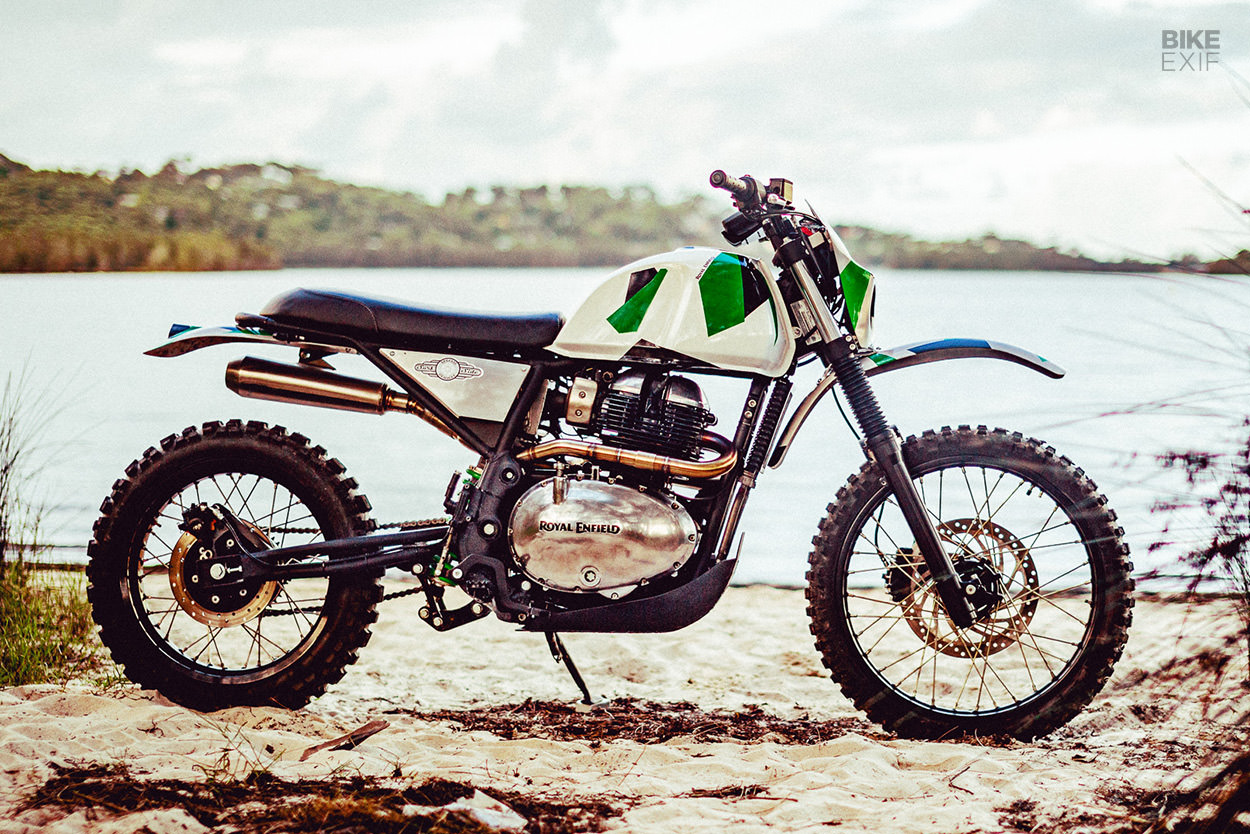 With that in mind, SurfSide sprung for an 865 cc kit from S&S Cycle. Then Hallam Engineering in Melbourne worked their magic, doing the head work and installing bigger valves, performance springs and a Hallam camshaft. The Enfield’s also running oversized throttle bodies, and a Verex muffler fitted to custom two-into-one pipes. 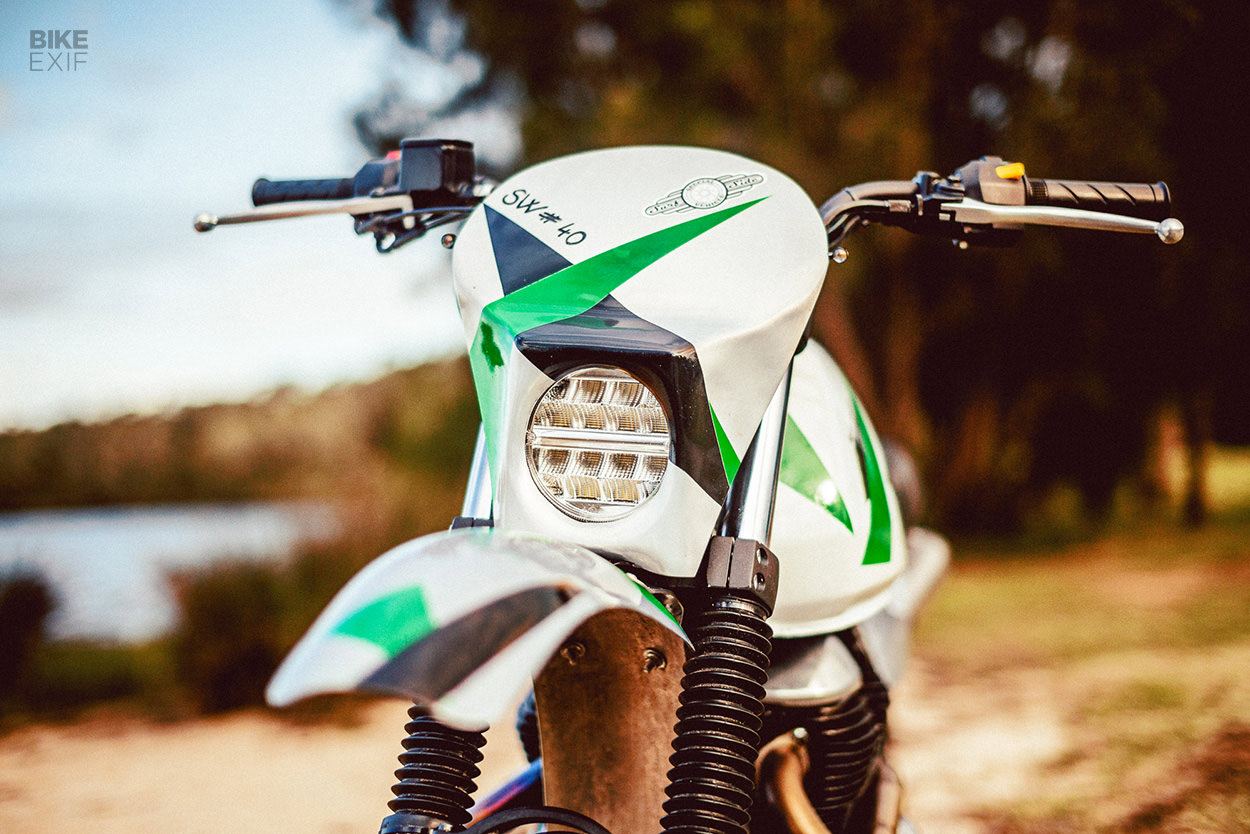 Up top is a full complement of custom aluminum bodywork that rides the line between the Himalayan’s vibe, and classic scramblers. We particularly dig the headlight nacelle, and the subtle way Tommy blended the taillight into the rear fender.

There’s more trickery lower down, with a custom swingarm hooked up to a custom mono-shock arrangement. The front end’s sporting longer forks and a 21” front wheel, and there’s a generous sump guard keeping the important bits safe. Up top, a Garmin GPS dashboard takes center stage, mounted off a set of scrambler bars. 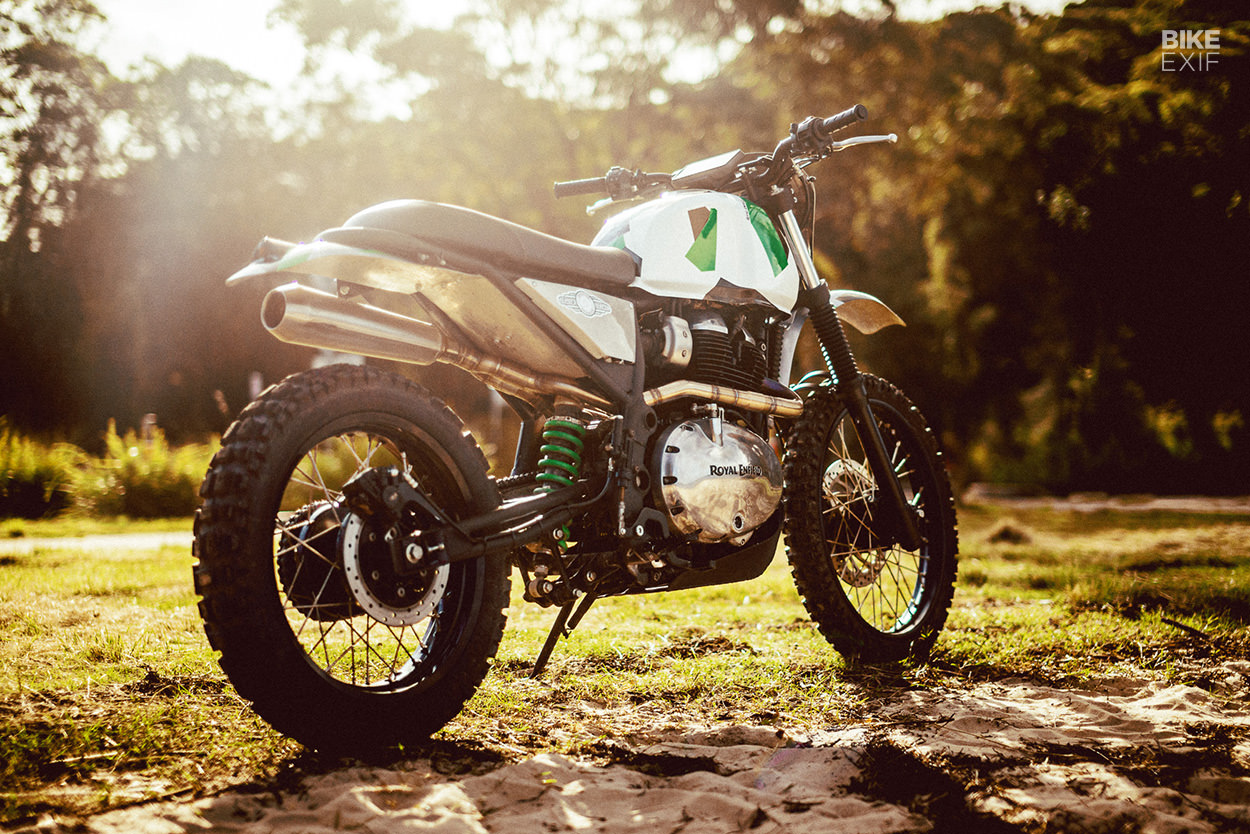 Anyone who’s followed Tommy’s work knows that he’s a meister of shaving weight off builds. Here, he’s shed a whopping 30 kilos [66 lbs] from the Royal Enfield twin. “We ended up with a bike that weighs 182 kilos on a full tank, and makes a bit over 70 hp,” he says. “It’ll be a weapon in the dirt!”

As we’ve said to numerous manufacturers before: Royal Enfield, please build this. 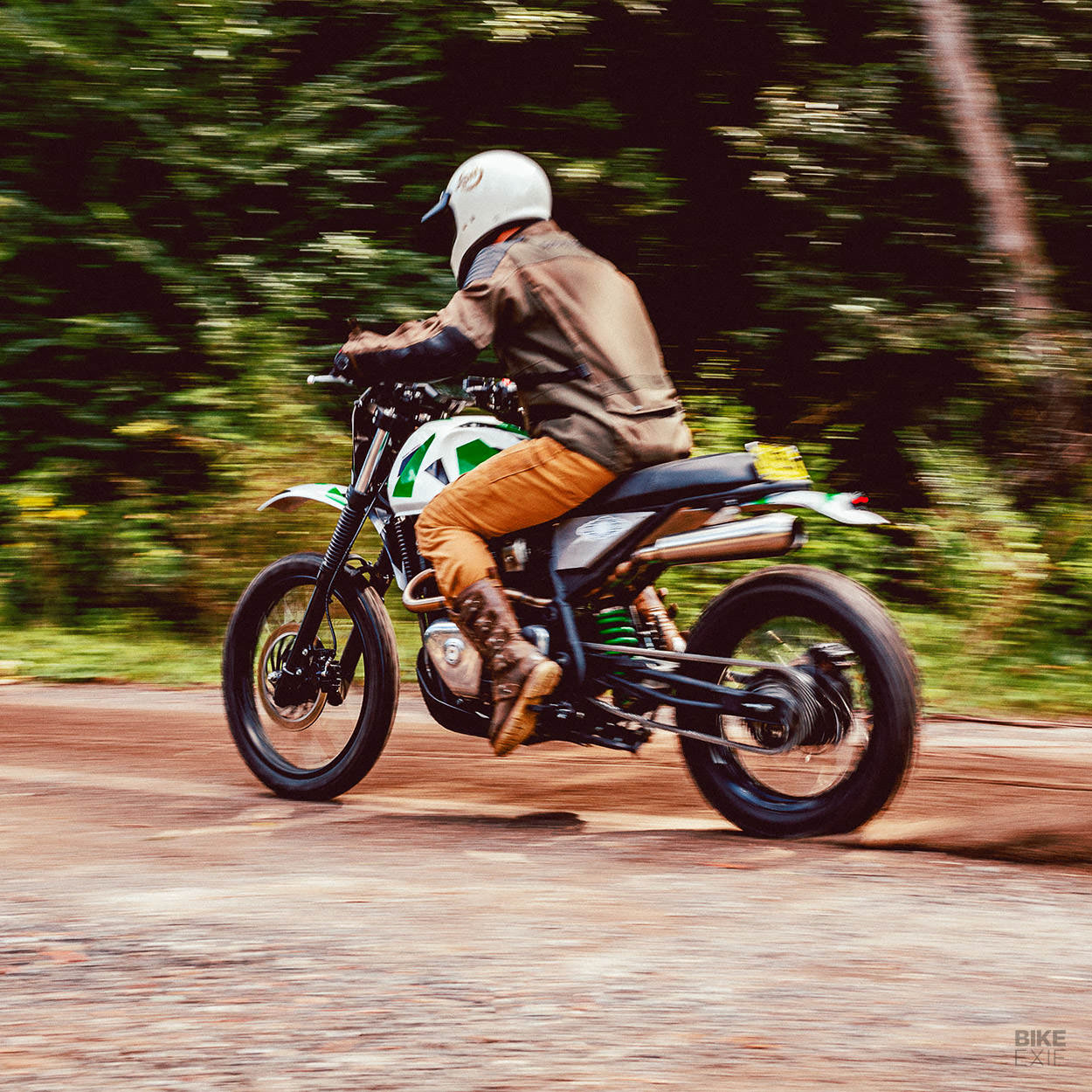 With thanks to Royal Enfield