By the Book: A Sportster street tracker from Mule 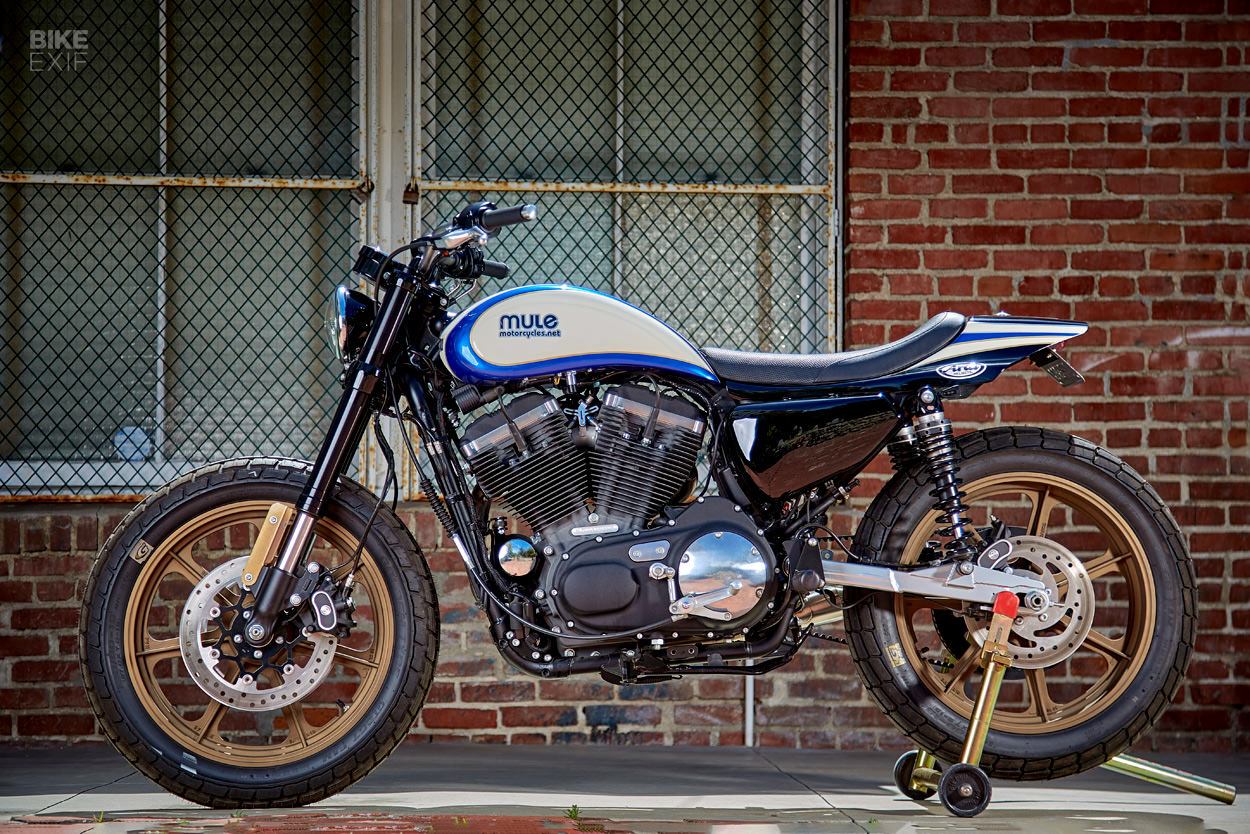 If we had a stock Harley-Davidson Sportster and a hankering for a top-shelf street tracker, we’d probably call Richard Pollock. Better known as Mule Motorcycles, the man has loads of experience and talent—and a knack for building machines that look like they’ve rolled straight off the dirt oval and onto the street.

You wouldn’t tell by looking at it, but this 2019-model Harley-Davidson Sportster Roadster is actually a modest build by Mule’s standards. There’s nothing over the top here—just perfect proportions, a well-judged parts spec and a host of custom touches done as only he can. The brief came from a friend, with a specific request for a modern Sporty as the donor. 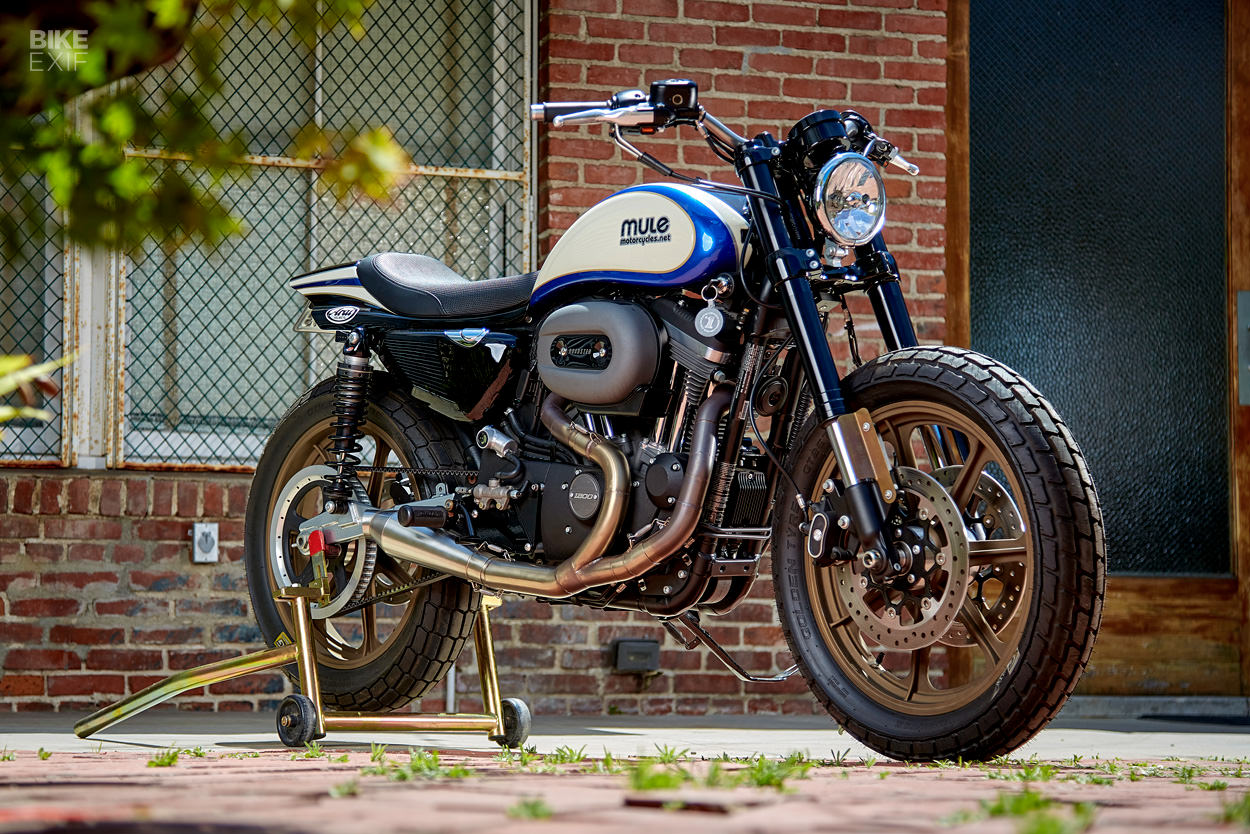 “The goal was to build a trick-looking modified Sportster that already had a 1200 cc, fuel injected, rubber-mount motor,” Richard tells us, “without going crazy on the budget. I really liked the gloss black triple clamps and upside-down forks on the ‘Roadster’ model. Even though they aren’t high-end, they work well and look good.”

Richard also kept the Sportster’s original controls, speedo and classically-styled headlight, along with its air filter cover. “I don’t mind the ‘ham can’ Harley air cleaner covers,” he says, “and it does contain a K&N air filter inside, so there is a small boost in performance.” A set of 1” Mule flat track bars were thrown into the mix. 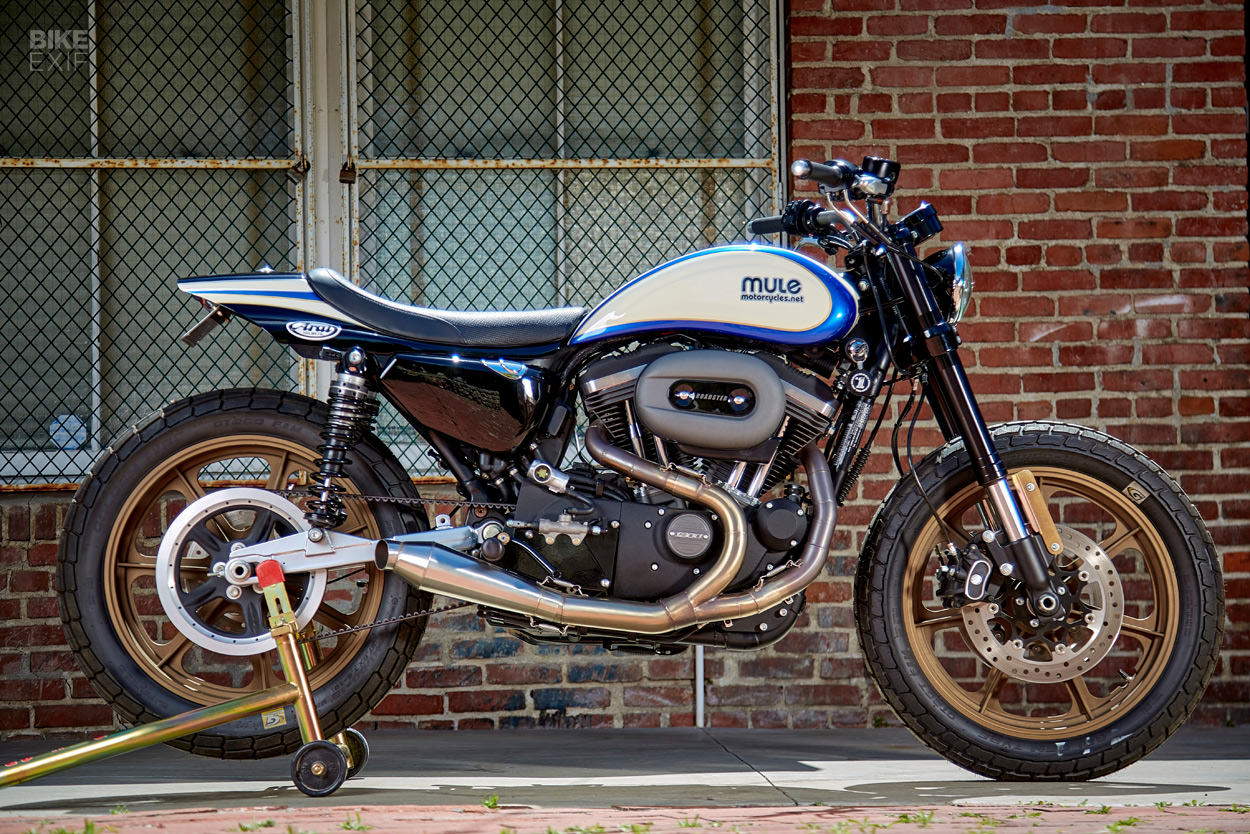 Even though it stands taller than most factory Sportster models, the Roadster still suffers from a common cruiser issue; it sits low at the back. So ‘fixing’ the bike’s stance was high on the list of priorities.

Richard wanted to retain the original shocks, so he opted to fettle the swingarm instead. The old shock mounts were shaved off, and new ones mounted 6” forward, along with custom gussets for strength. Not only has it lifted the rear end, but it’s also ‘softened’ the stiff OEM shocks. 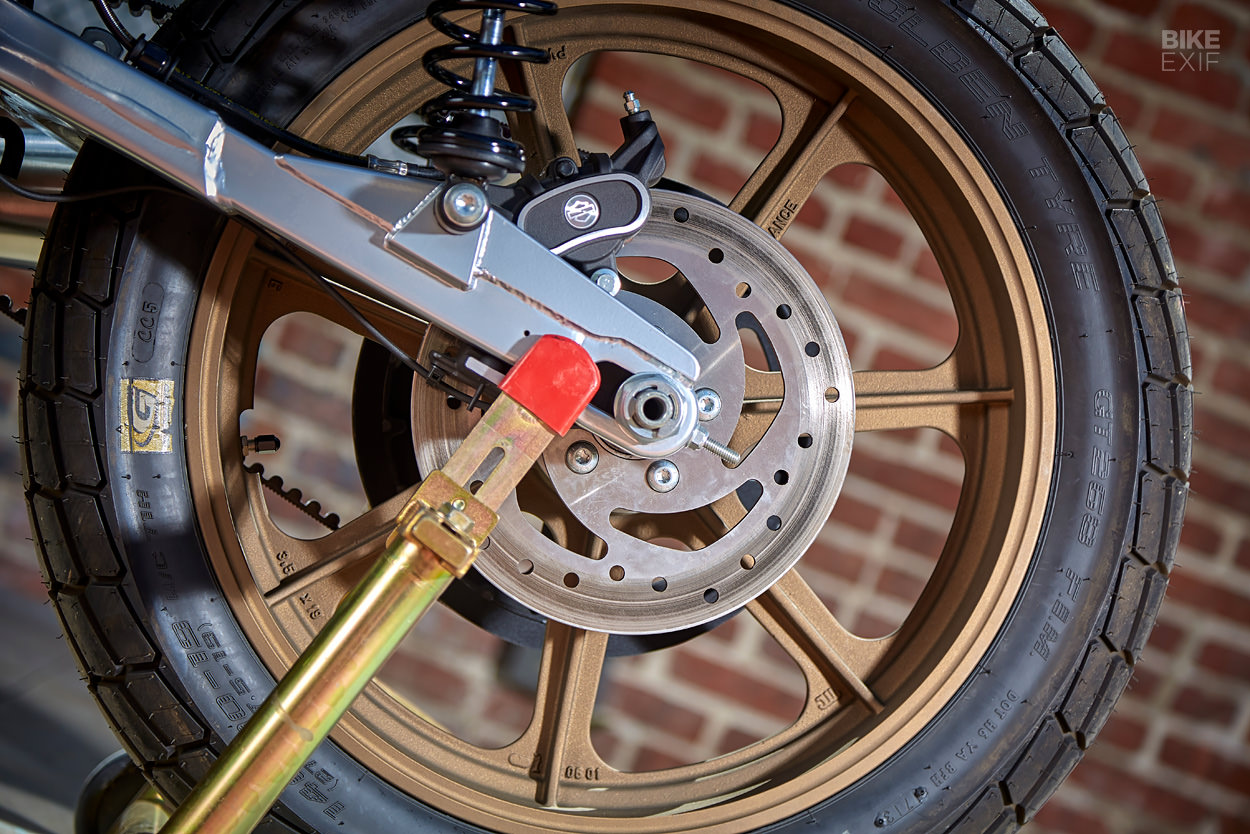 As is customary for flat trackers, this Sportster street tracker rolls on 19” magnesium wheels, from Sundance in Tokyo. Measuring 2.50×19” up front and 3.50×19” at the back, and wrapped in Goldentyre DT rubber, they use custom carriers to mount the Harley brake discs and rear pulley. The stunning finish on them is a ‘burnt bronze’ color from Cerakote.

A friend of Richard’s, Mel Cary, fabricated a small pair of stainless steel fork guards, then took a torch to them to create a bronze effect that matches the wheels. They mount directly to the original front fender mounts on the fork lowers, negating the need to shave those off. 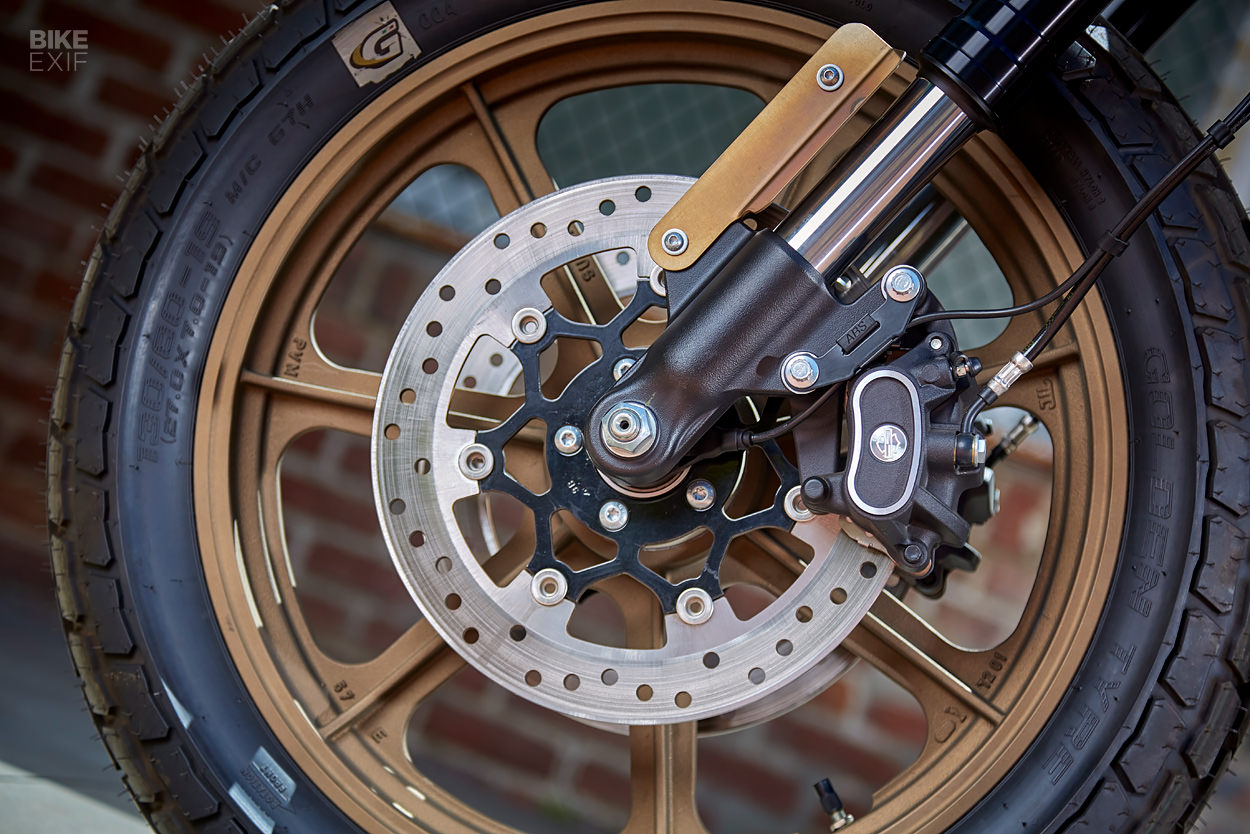 One detail that most won’t notice at first glance, is this street tracker’s retro-styled foot pegs. “I like to make my own foot peg setups,” says Richard, “and that includes the Bates rubbers which I run on all my flat track and street tracker builds. They feel good under your feet, help with the traditional Harley vibes and are available new.”

Richard fabricated the mounting brackets himself, along with a rear brake fluid reservoir, using a sight glass borrowed from a Yamaha. 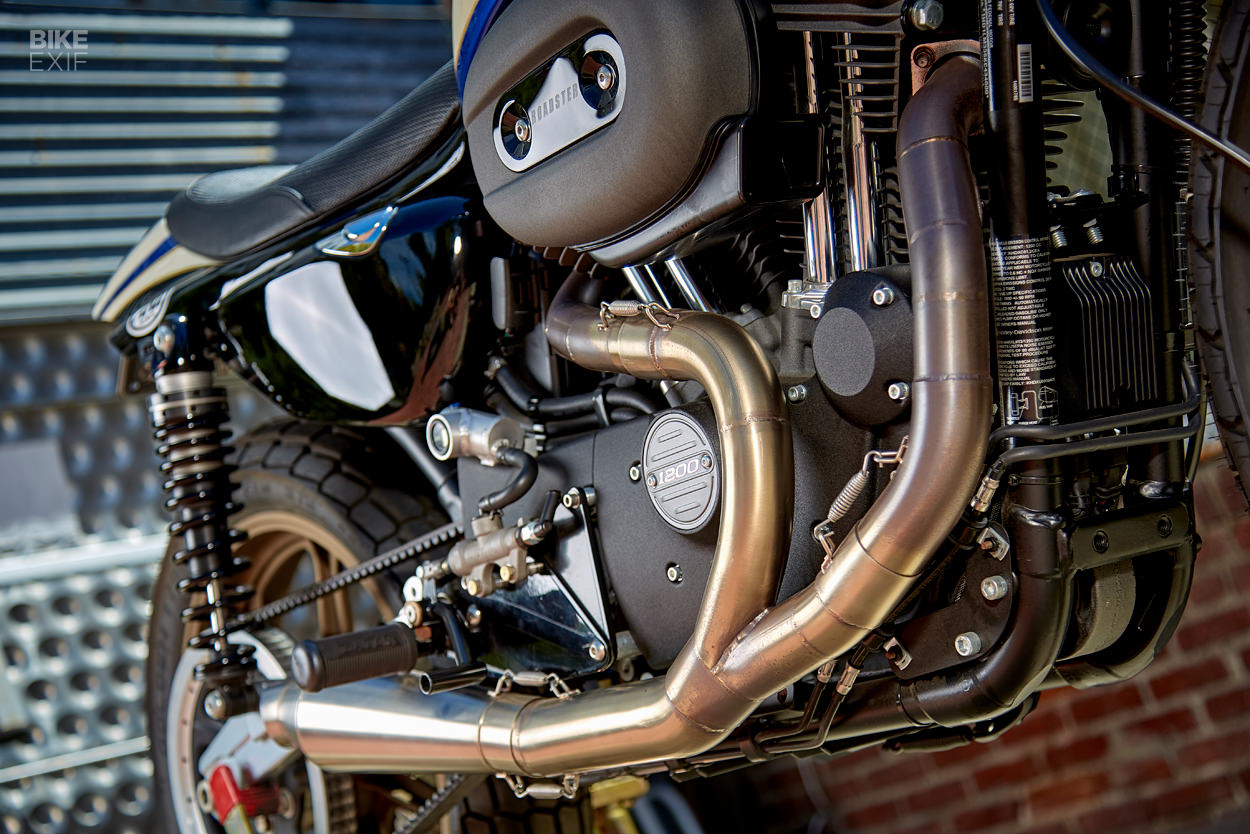 The exhaust took some doing to get right too. Richard kept the 3” section of each header pipe that contains its O2 sensor fitting, but fabricated the rest from scratch. The initial idea was to hang an aftermarket muffler intended for an Indian FTR1200 off the end, but that didn’t pan out.

“As the motor is rubber-mounted, the exhaust all the way to its tail end has to move freely with the motor,” explains Richard. “The muffler was a bit heavy to hang in the breeze without substantial mounting, so I reverted to a Cone Engineering megaphone… worlds lighter! The exhaust is short and tucked in super tight, so a small extension was added to direct the heat away from the shock and drive belt.” 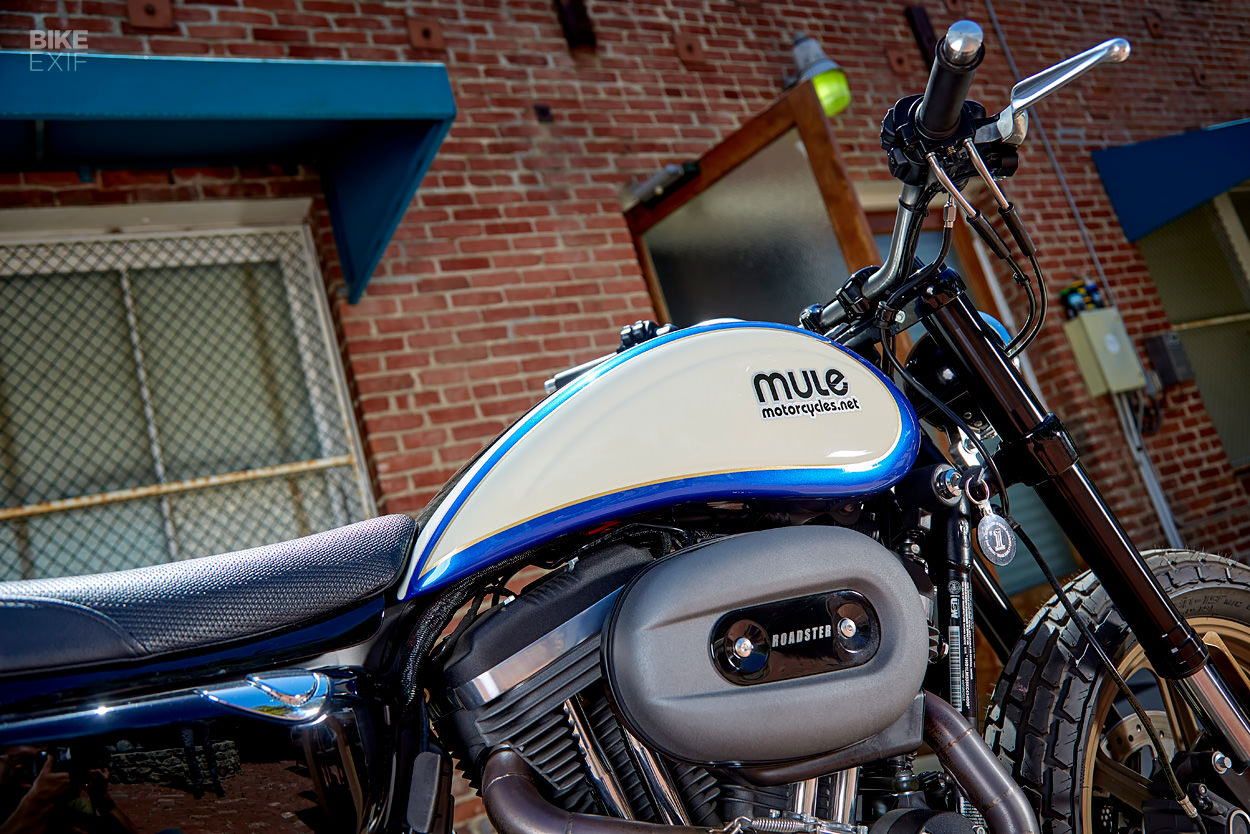 Moving to the bodywork, Richard turned to Storz Performance for a classic flat track tank and tail combo. The tank is made from aluminum, and includes provisions for the modern Sportster’s fuel pump.

The fiberglass tail section was shortened by about 3”, then fitted with a seat pad from Saddlemen (“which is as good as you can get,” says Richard). The tail is mounted on a custom subframe, complete with new seat brackets and a tidy rear loop, and weighing far less than the original Harley fender struts. 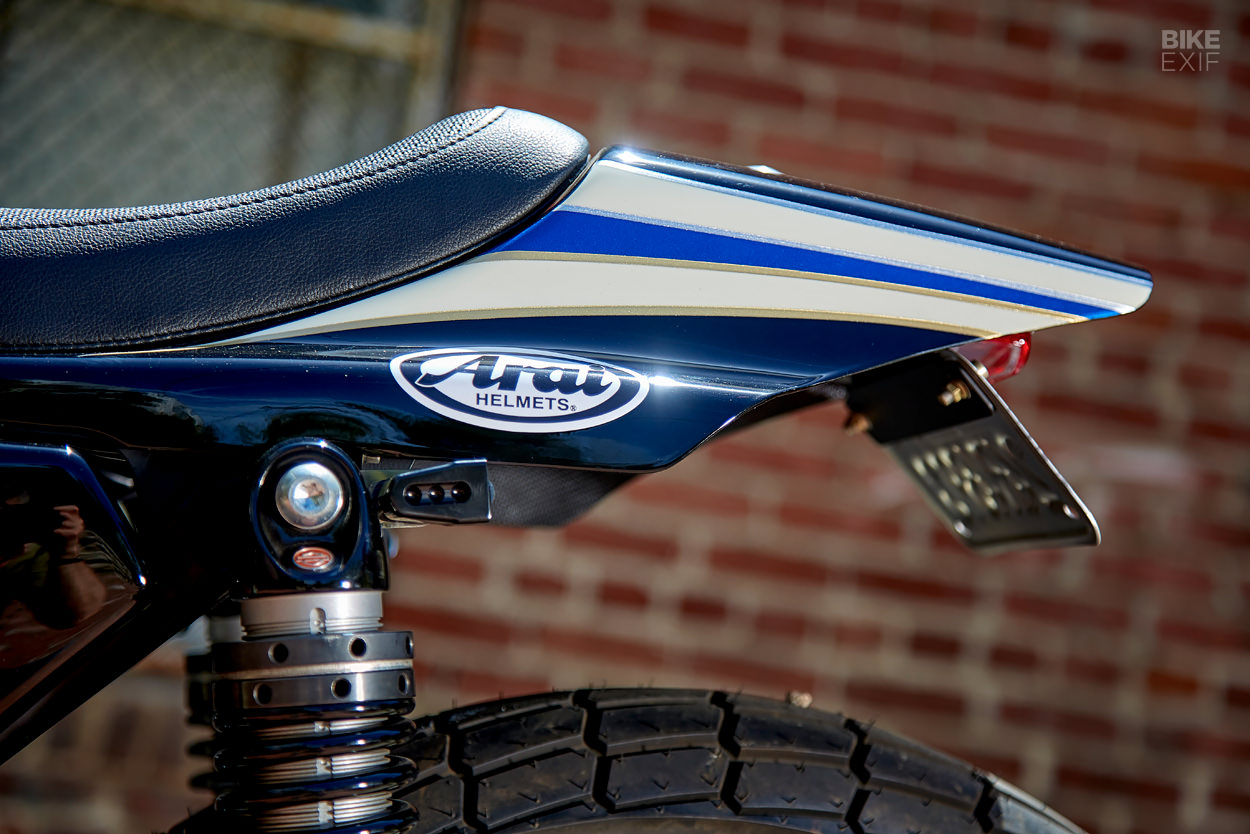 For the livery, Mule commissioned David Tovar at SBK Paint in San Diego to lay down a Yamaha-inspired combination of blue, white and black. A handful of tasteful graphics add to the race-bred vibe.

Looking factory fresh with not a hair out of place, this Sportster street tracker is proof that you don’t need to go overboard to build a great looking Sportster—provided that, like Richard, you know what you’re doing. 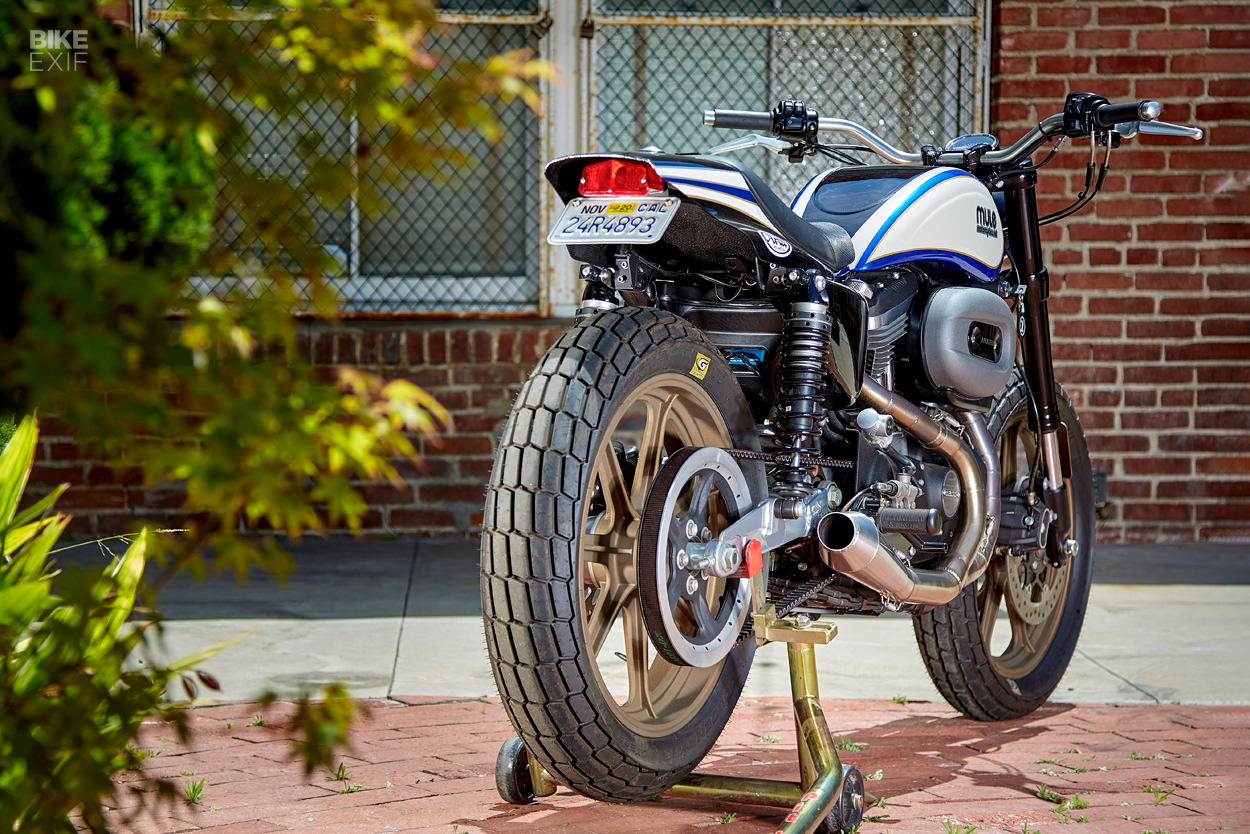