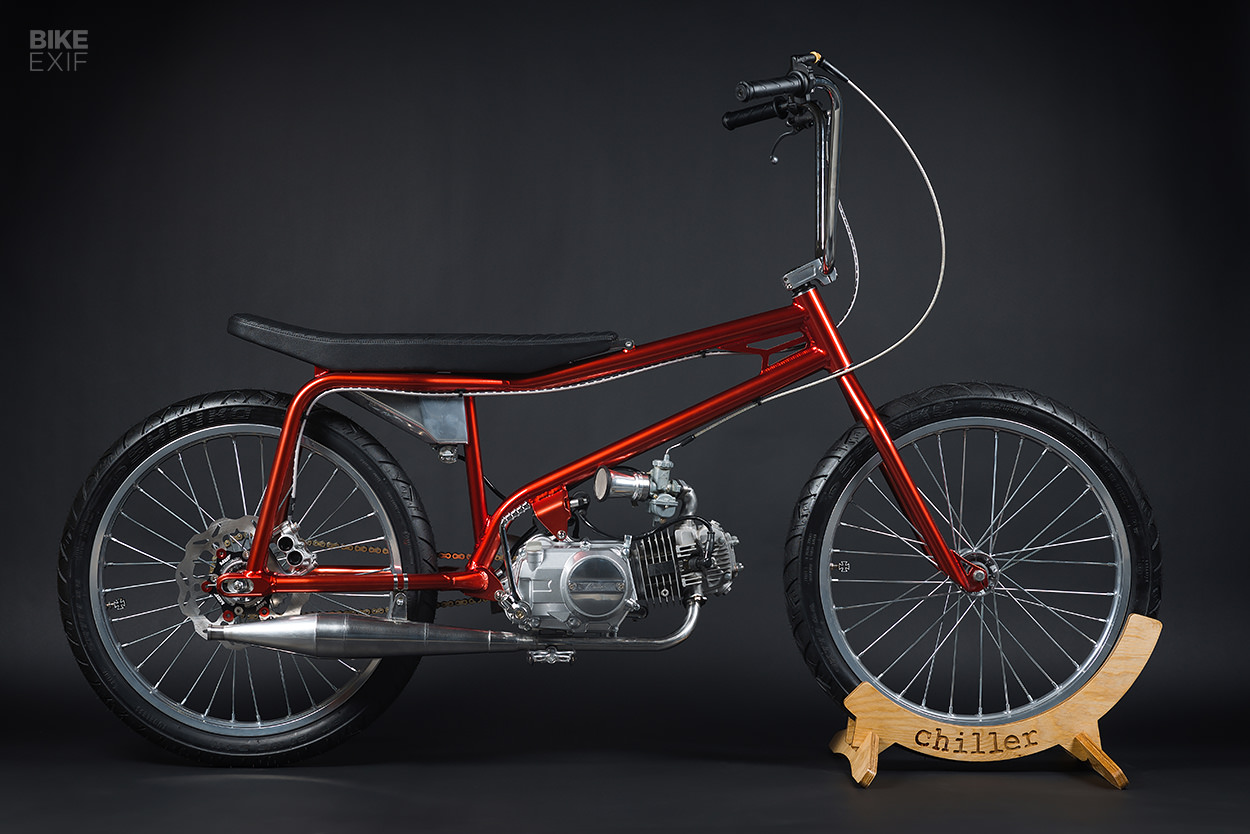 The debate rages on whether electric motorcycles are better than petrol-powered ones. Meanwhile a group of mad scientists in Saint Petersburg have side-stepped the argument completely, by building two near-identical bikes; one petrol, one electric. And we honestly don’t know which one we like more.

Meet ‘Chiller’—a cross between a BMX cruiser and a moped, with the option of two different drivetrains. It’s the work of Blackmarket Project, who’ll be offering each variant as a limited production run; the bikes you’re looking at here are the prototypes. 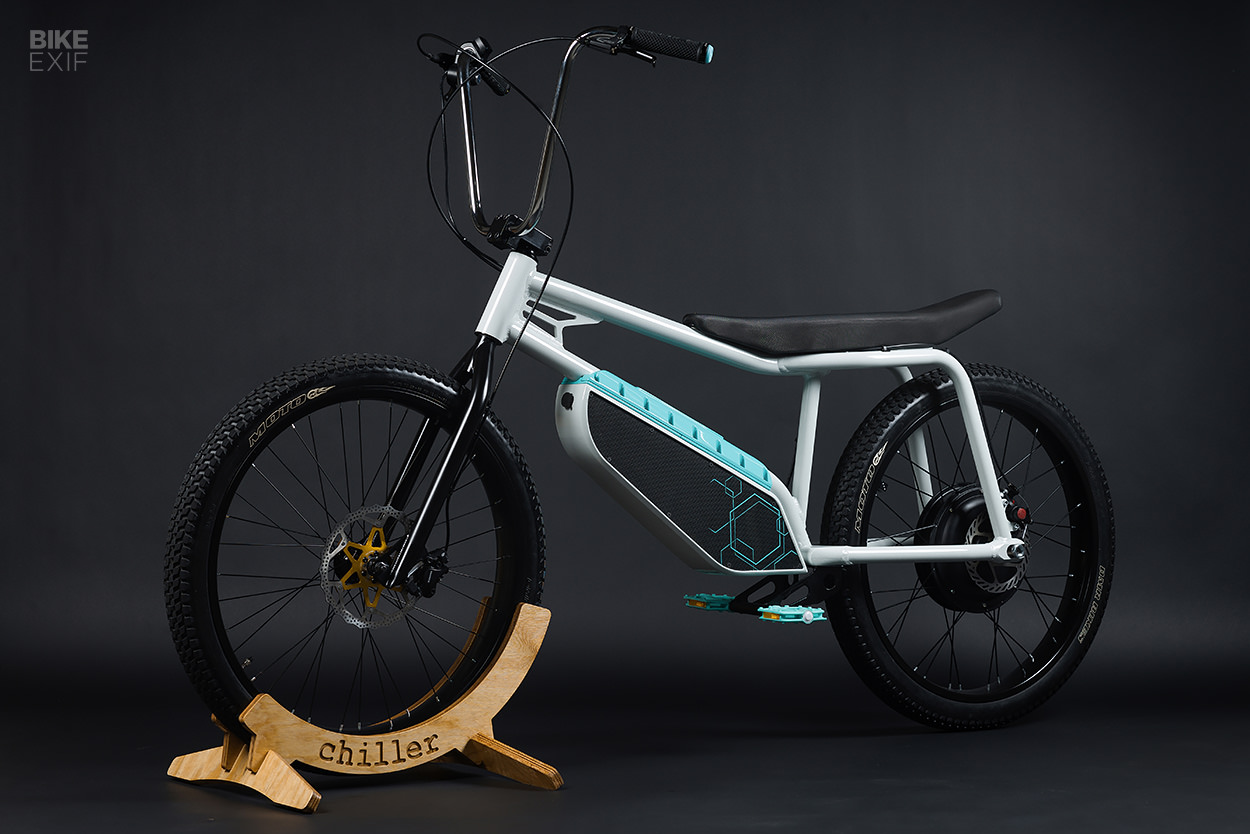 Blackmarket Project is a new collaboration between the custom motorcycle and scooter workshop, Butcher Garage, and their metal fabricator friend, Arseniy at Metal DIY Workshop. The project has been two years in the making, but the idea’s been a long time coming—partly inspired by builders like Down and Out BMX.

Both versions of Chiller are built around the same 6082 aluminum frame, designed with a clear BMX cruiser influence. Weighing just 4.2 kilos (9.2 lbs), its simplicity and elegance belie just how much development went into it. 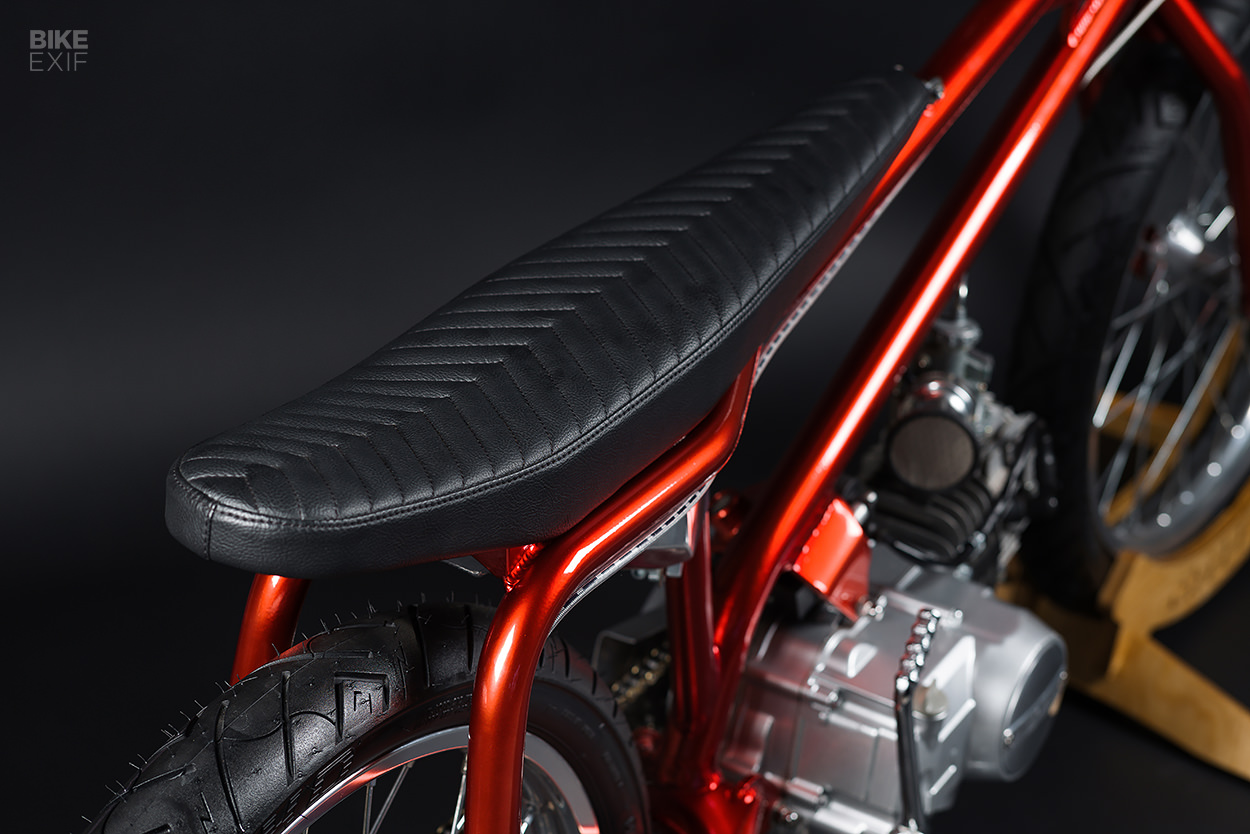 “One of the key features of the frame is the cast aluminum yoke for the down tubes. Special forms for mass production were made to make our parts repeatable, strong and very good looking. Future bikes will also have cast head tubes, mass produced in-house.” 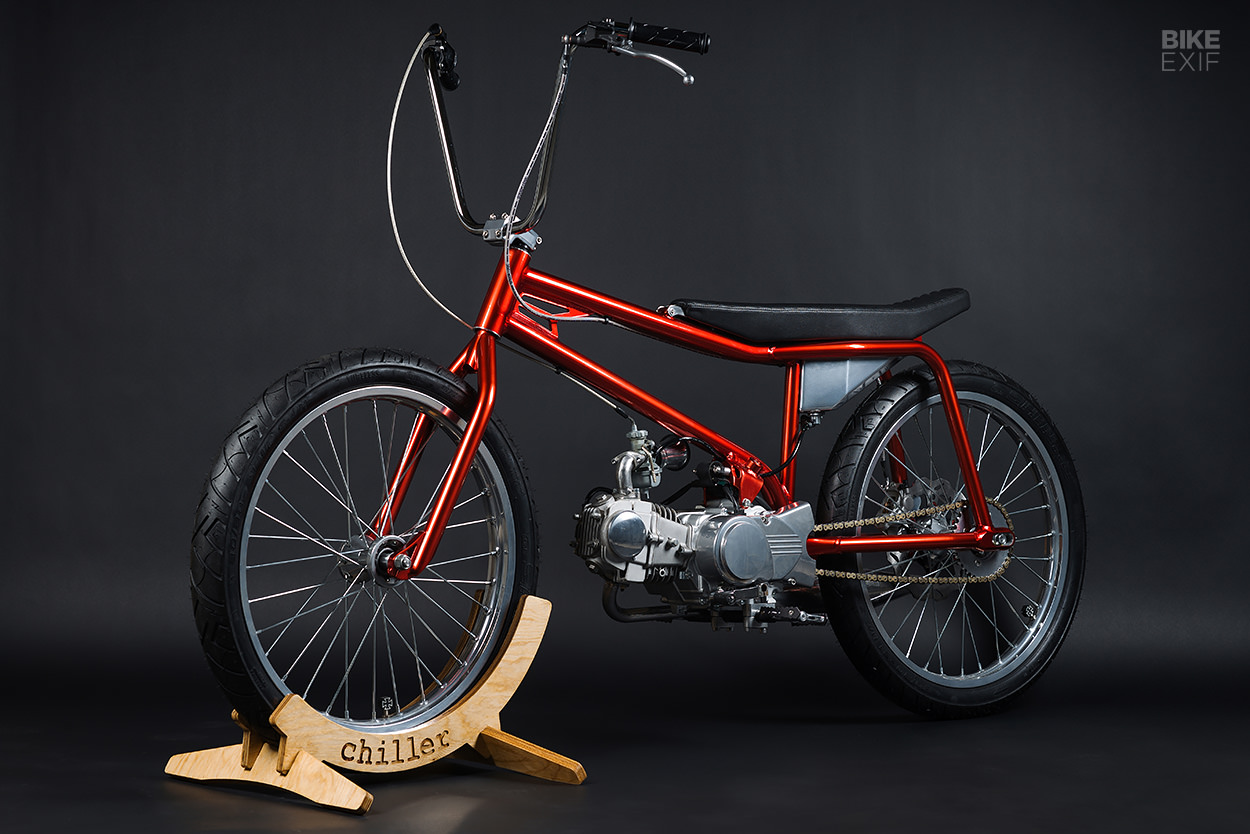 The petrol version includes tabs to mount a tiny four-stroke motor. This prototype uses a Honda Super Cub unit, but there’s a whole range of motors that fit, including pit bike engines. Blackmarket plan to sell the rolling chassis without a motor, leaving that part up to the user.

“You can choose an engine for your own riding style and laws in your country,” says Alex. “For example, in Russia a 50 cc is absolutely street legal with no registration.” 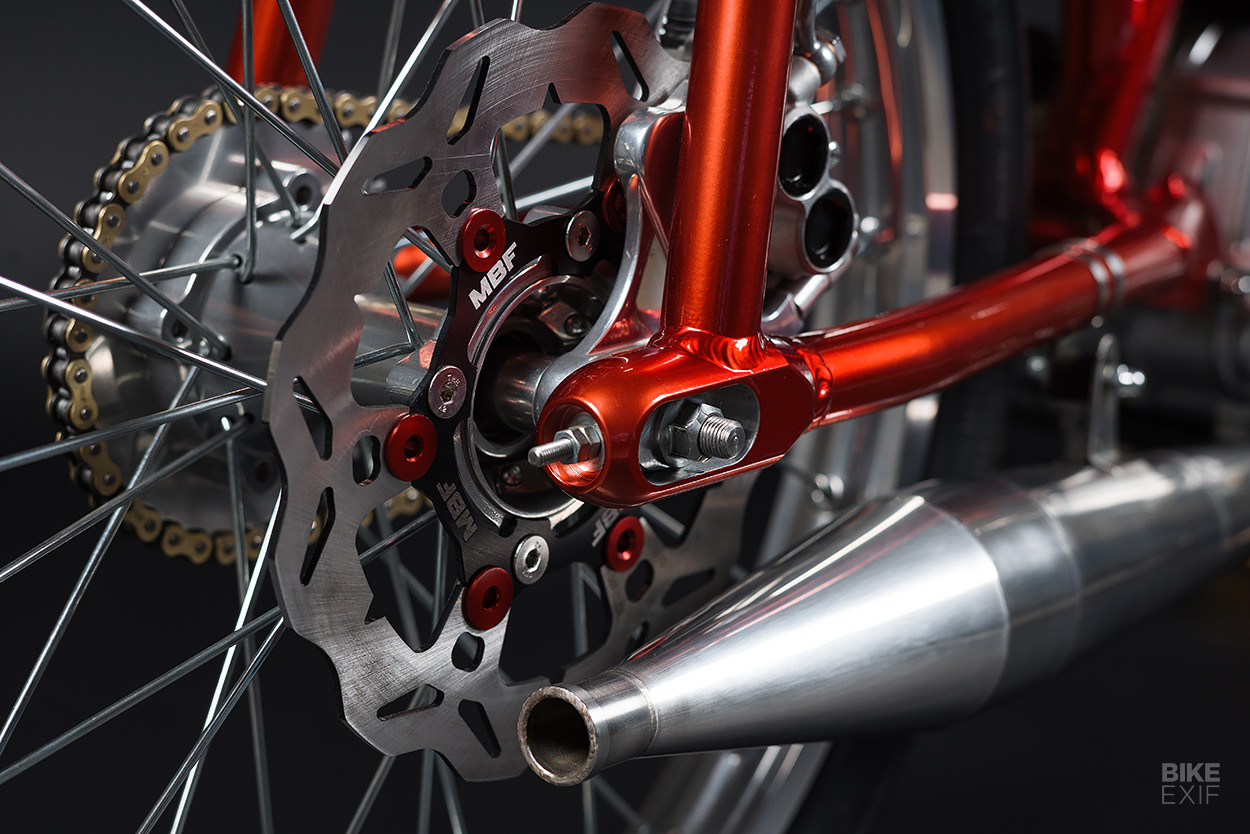 The crew also had a special stainless steel exhaust made up especially for this project, by the exhaust specialist Solo Exhaust. It apparently sounds great, and it’s a part that they plan to offer for sale alongside the chassis.

Fuel’s stored in a 1.6 liter (less than half a gallon) aluminum fuel cell, accessed by flipping up the hinged seat. (There are plans to built a bigger reservoir too.) 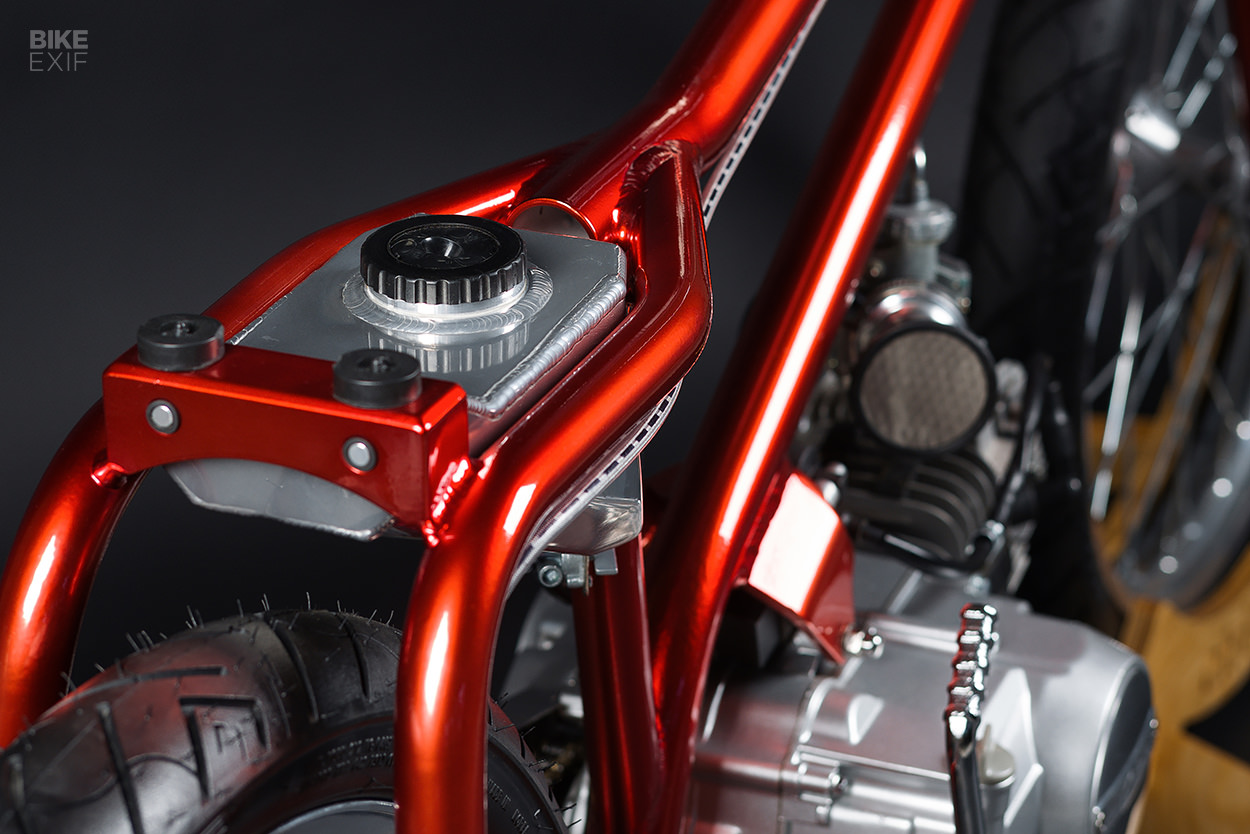 The petrol bike rolls on custom wheels laced with 21” motorcycle rims, with a four-piston radial mono-block Formula brake out back. A pair of bicycle pedals act as foot pegs, with a set of off-the-shelf bicycle cruiser bars up front. With just a single brake lever, and a single-cable Domino throttle, the bars are super tidy. 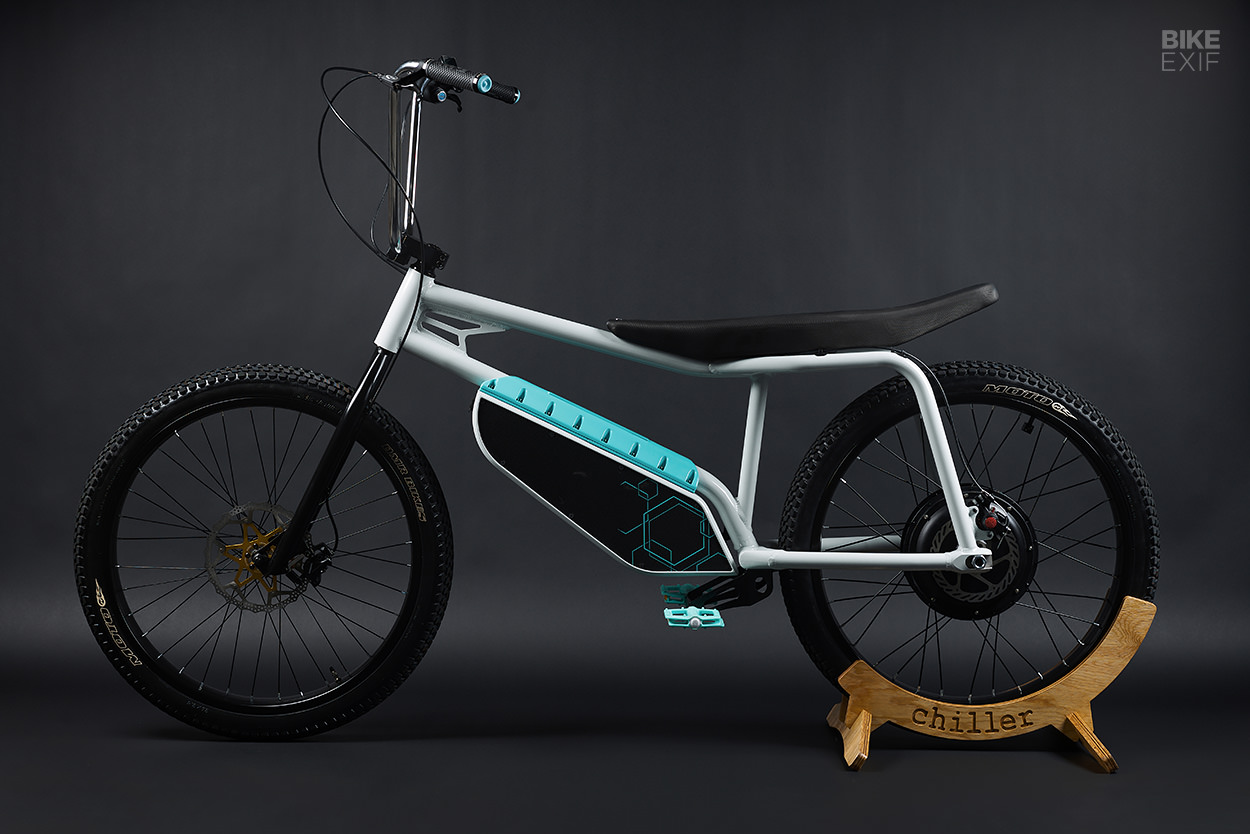 For the electric version, Blackmarket added a 2.5 kW hub motor that propels the bike to a top speed of 59.7 km/h, with a battery range of 33 km. “It was heavily tested on street, and we were very surprised how fast and silent this beast is,” says Alex.

This one’s saddle is fixed in place, and hides the electric controller. Both bikes’ saddles are wrapped in leather by the master leather worker Aleksander Torgashov, who’s been working with the guys for over a decade. 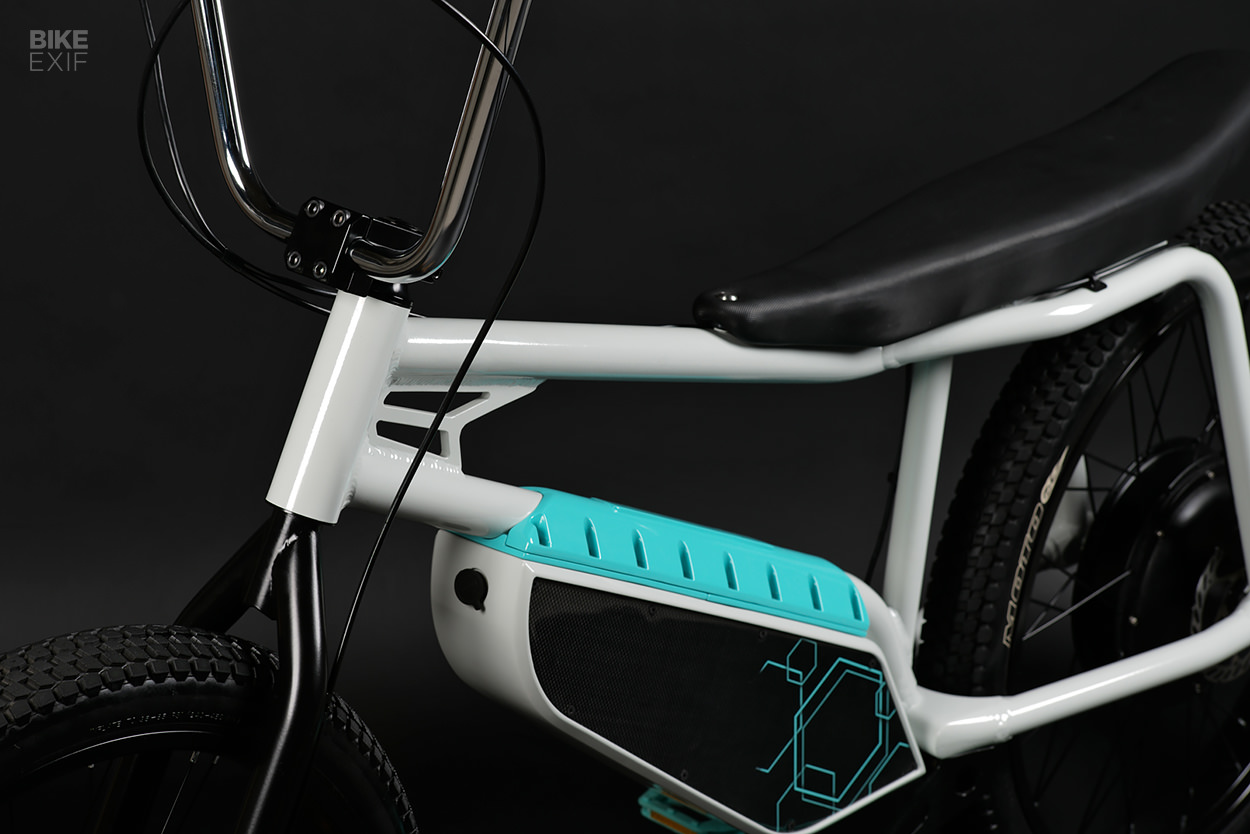 The electric build rolls on custom wheels on 26” bicycle rims with DMR tires, and uses a mix of Shimano and Avid bicycle disc brakes. It wears the same bars as its companion, with the addition of a small indicator display for the battery and drivetrain.

Its battery is mounted to the down tube, adding an extra visual hit with a large surface area that can be covered with graphics. 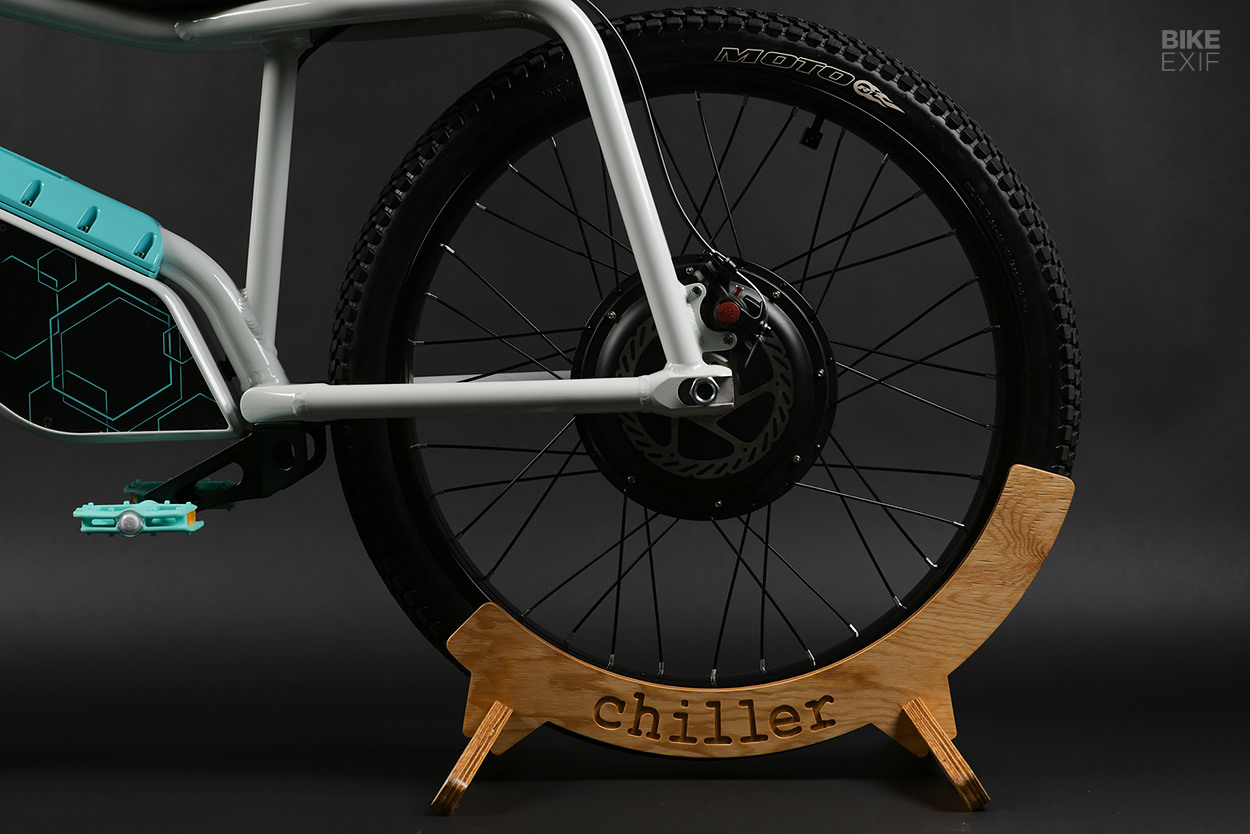 Blackmarket have finished this version in playful tones, as a deliberate contrast to the classic deep red on the petrol version. And it has a set of color-matched pedals too, mounted on a custom-built bracket.

“They rotate to give the scooter a BMX look when you ride,” says Alex. “Nobody realizes you have a scooter until you pass them at high speed. It’s a kind of a camouflage, plus you can easily remove them and change their shape, color, material or contact force.” 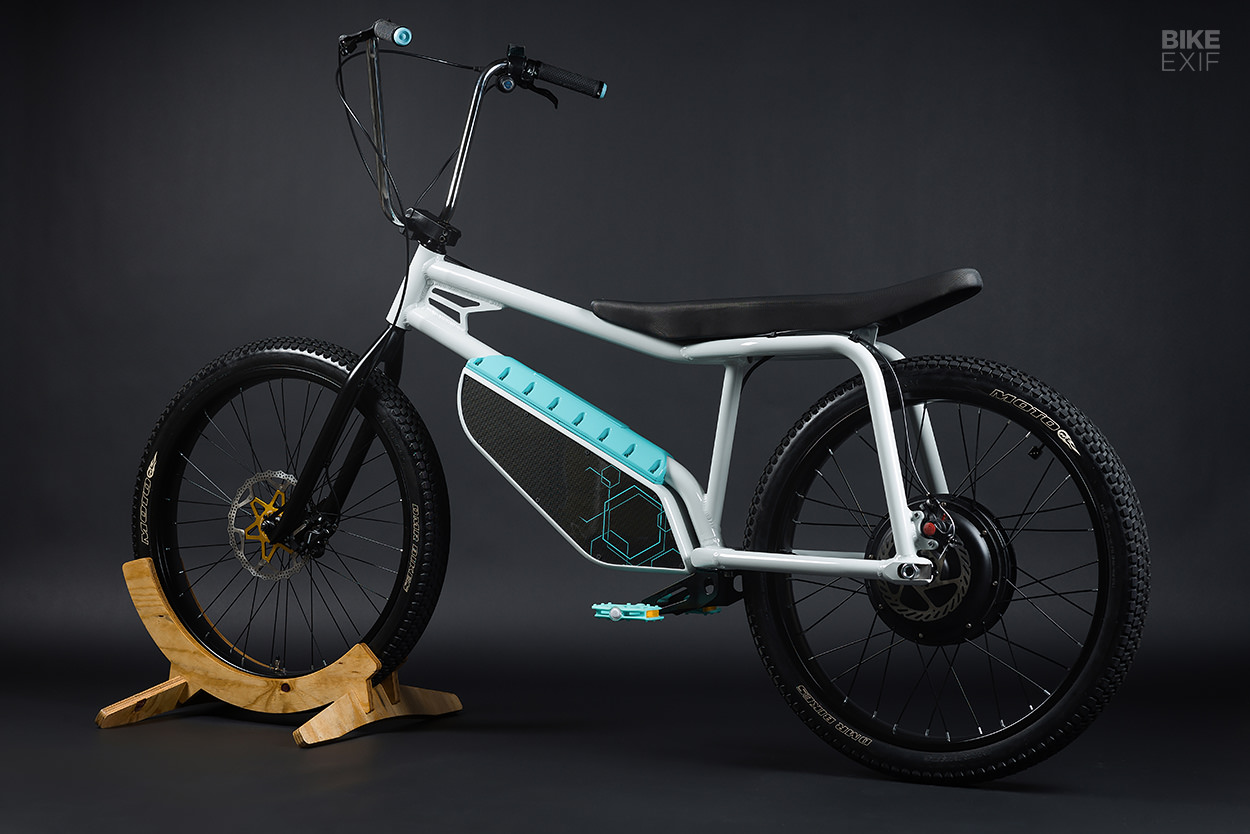 Blackmarket will be offering both versions of Chiller with a number of personalization options, and with a few extra features that they’re not ready to discuss yet. As they stand, these two builds are actually a little too powerful to qualify as ‘mopeds’ in Russia. But since the petrol bike will ship without a motor, and the electric version with a slightly less powerful unit than the prototype, they’ll pass.

That means you can ride it on the street legally if you have an ‘M’ code on your driver’s license—a code for mopeds that’s automatically assigned when you get any other type of license. “Or if you’re fast enough to get away,” says Alex wryly. 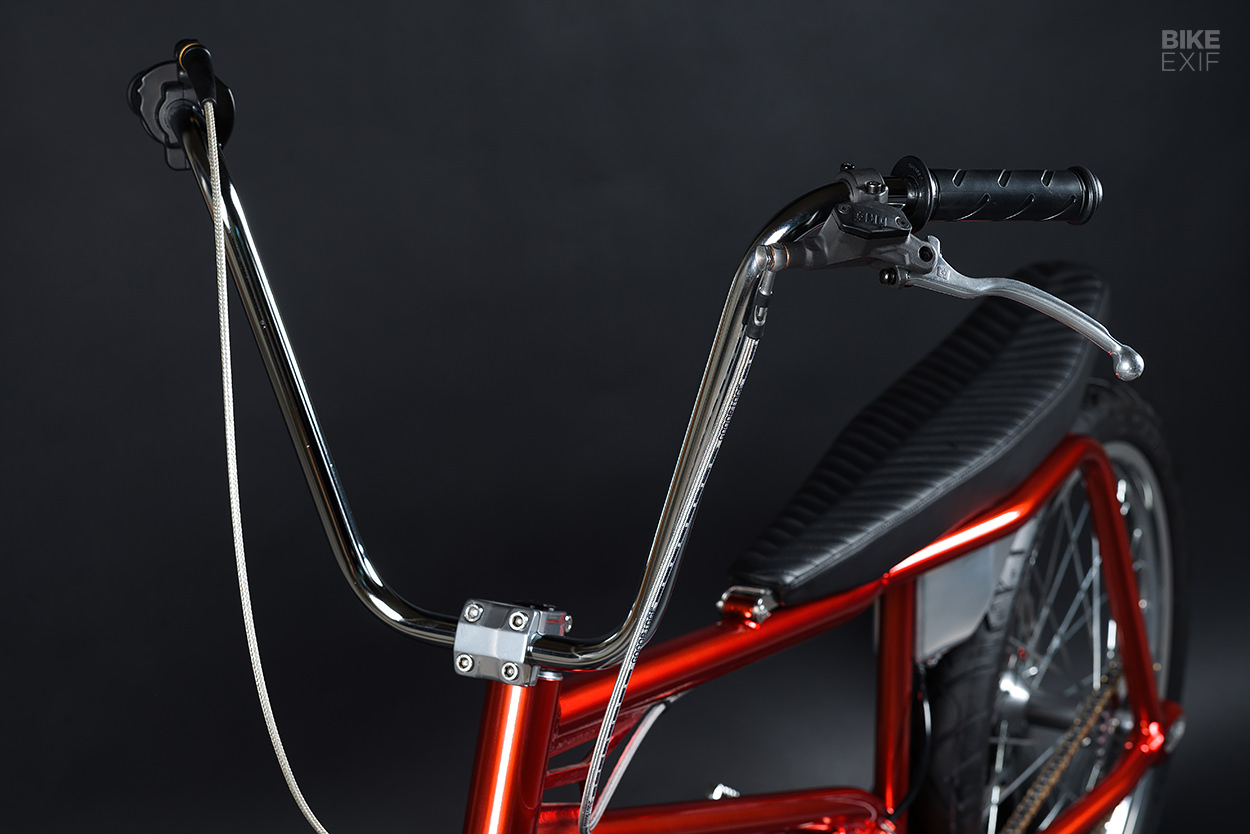 Just this weekend, Blackmarket took the Chiller down to the White Night Kustom show—and took home the award for Best Frame Design. But the best part, was the test rides they dished out to event attendees. “Nobody could believe they were riding a championship bike,” says Alex, “it was very funny.”

But what’s surprised the guys the most, is that the Chiller, in both variants, appeals to different riders in different ways. And that no one can choose a favorite between the two. 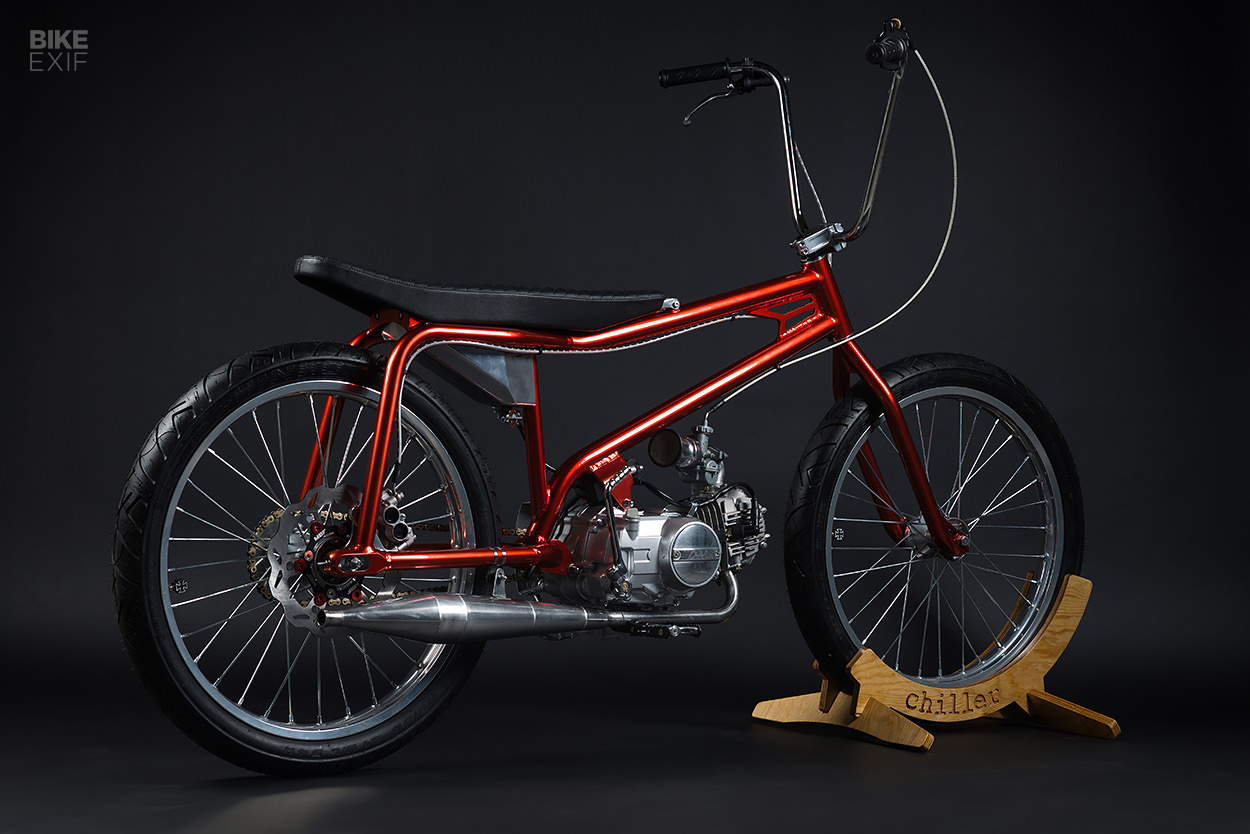