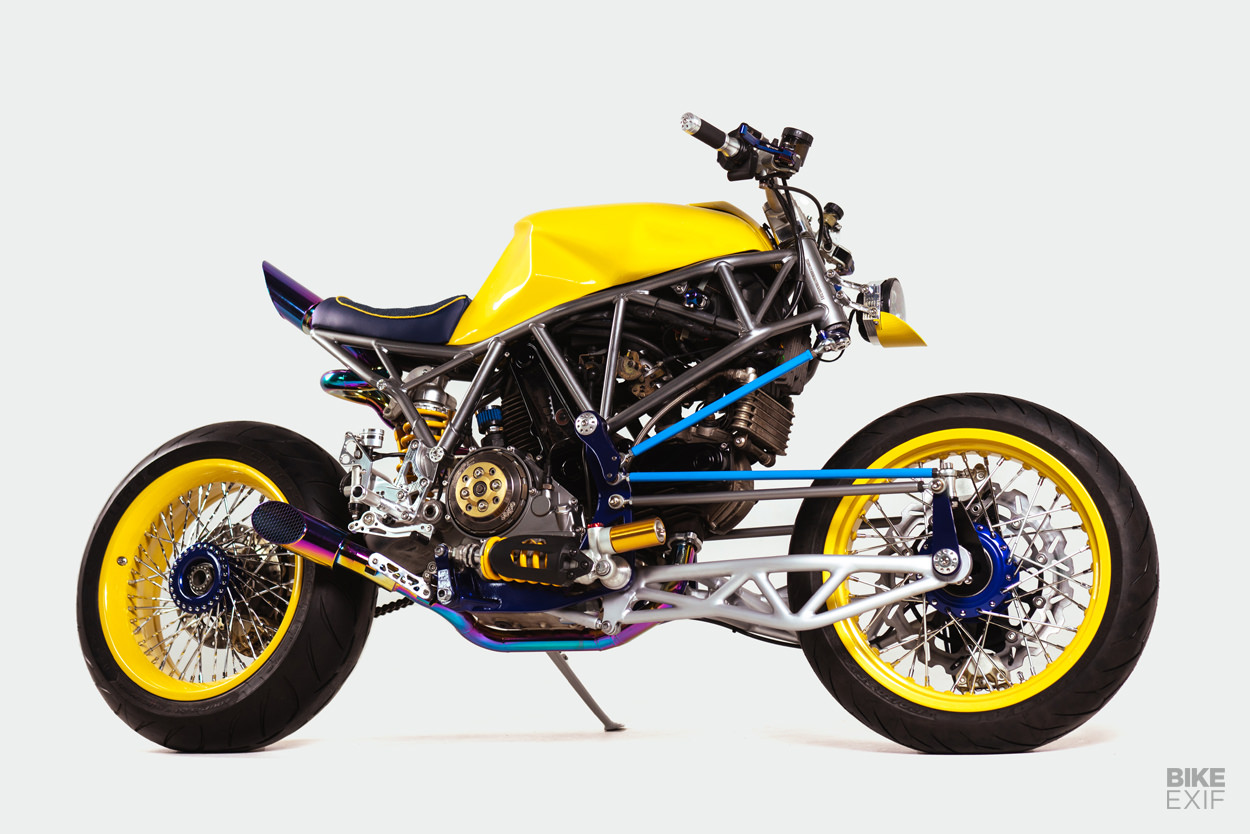 Most customs are driven by aesthetics. A handful are defined by engineering, and this very strange Ducati from St. Petersburg is one of them.

It comes from Vitaliy Selyukov of the Balamutti workshop, and he’s a dab hand at pushing the engineering envelope. He’s the man who built a three-wheeled Hypermotard ice racer, and he’s stayed true to form with his latest creation. 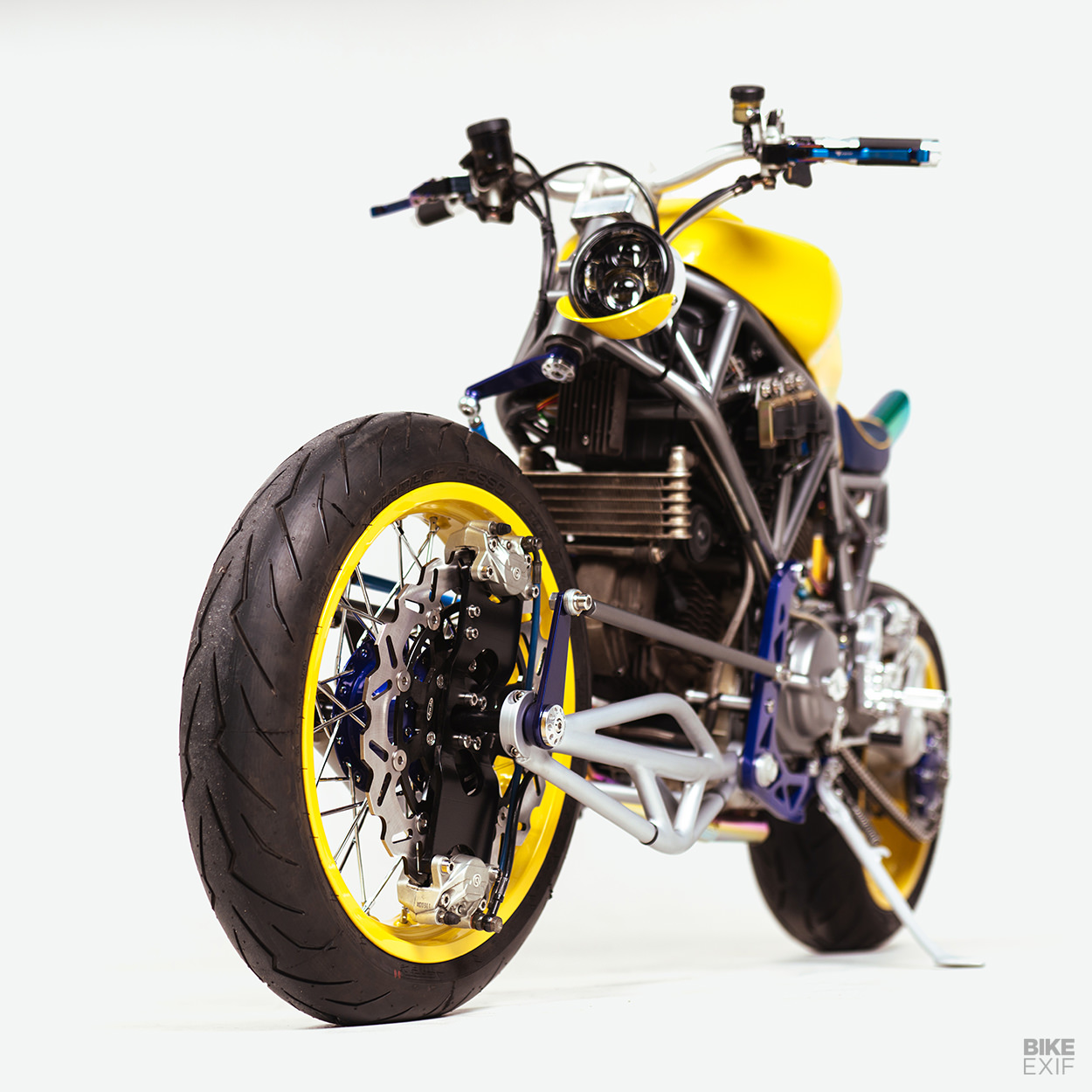 Balamutti is actually a family operation, because Vitaliy works with his wife Sanita and daughter Angelina. But there’s nothing homely about this 900SS-powered build, which he’s called ‘Chimera.’

The project took the team almost four years to complete, with a lot of that time occupied by the front end—which uses a swingarm with hub-center steering. 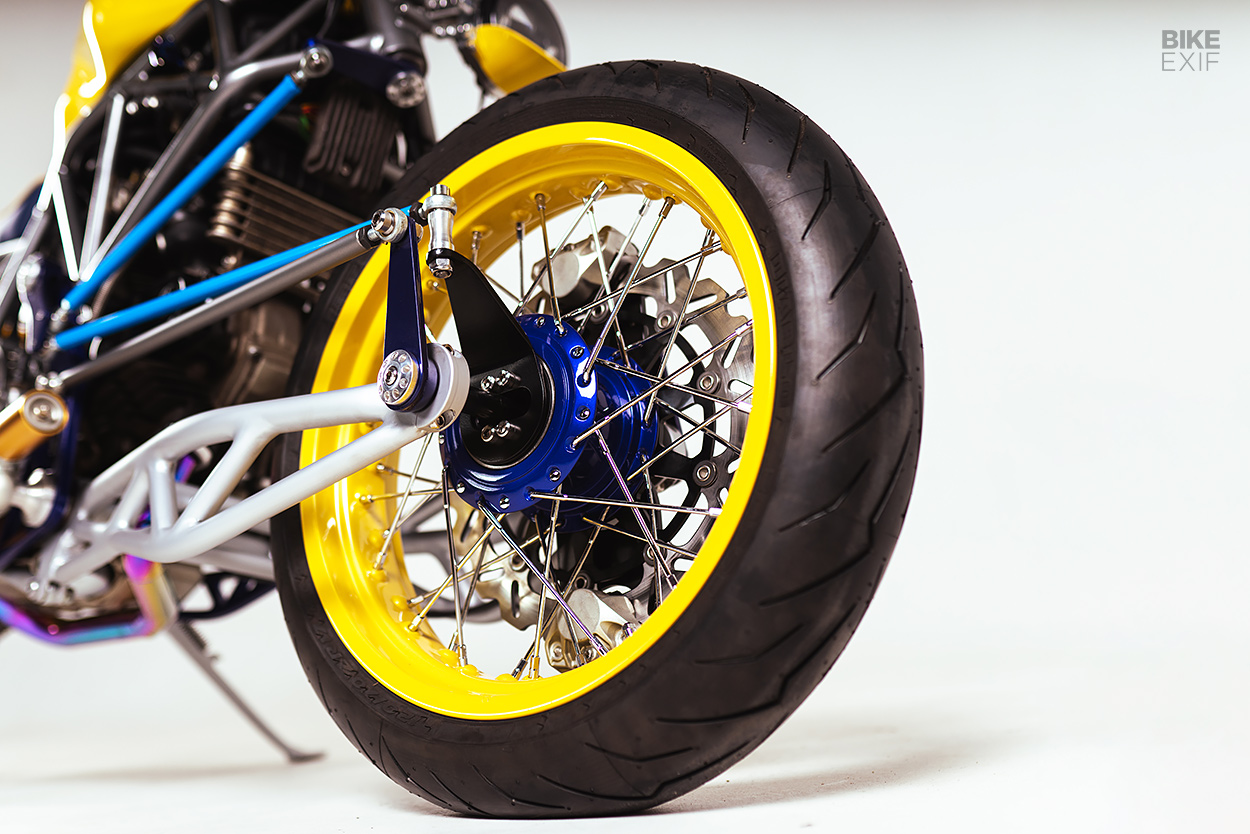 The obvious parallel is the Bimota Tesi, which has a similar front end. But this one is slightly different.

“I was able to bypass Bimota’s patents,” says Vitaliy mischievously. “The person who designed this suspension was the inventor Count Shilovsky.” (Historians may know Shilovsky as the man who revealed the ‘Gyrocar’ in 1914—a two-wheeled oddity stabilized by a gyroscope.) 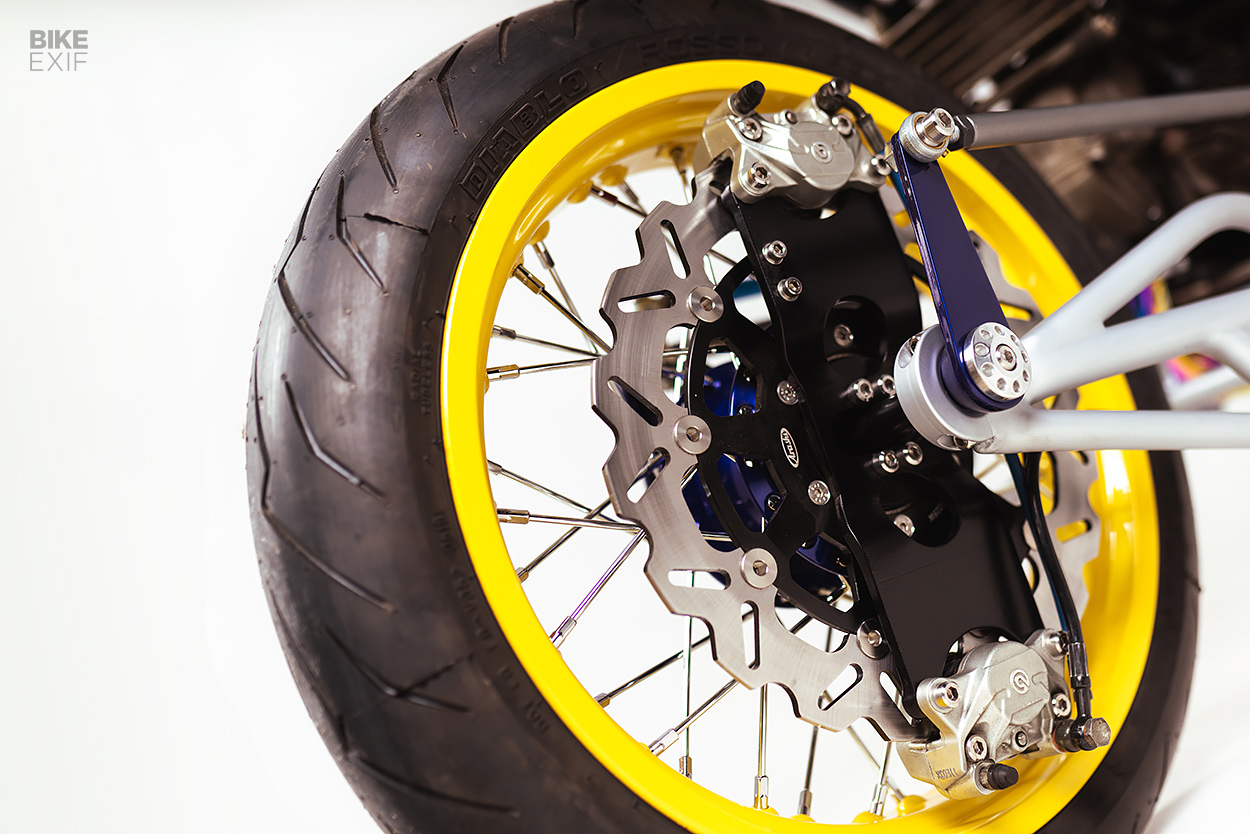 “Of course, the Bimota Tesi was an inspiration,” Vitaliy admits. “But I’ve reduced the spherical joints and levers in the steering. As a result, I have one less lever and two fewer loops.”

To reduce unsprung weight without compromising strength, Vitaliy has used high-quality structural alloy steel wherever possible—which was not easy to find in billet form. 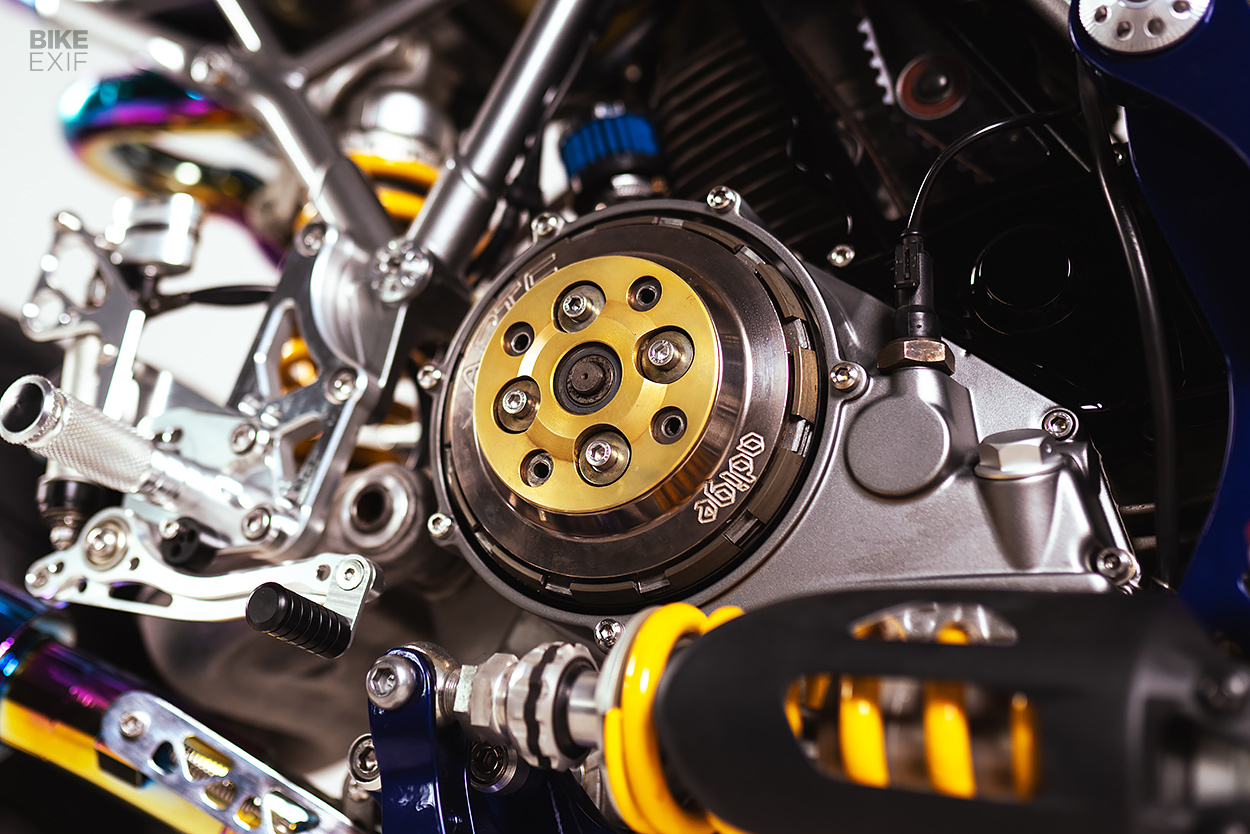 The rest of the bike is heavily modified too, albeit more conventionally, using a smorgasbord of parts from several other Ducatis—including the Hypermotard, Monster S2R, 916 and 1098.

The engine is a Desmo L-twin 900SS unit, rebuilt and repainted, and now fitted with a slipper clutch. 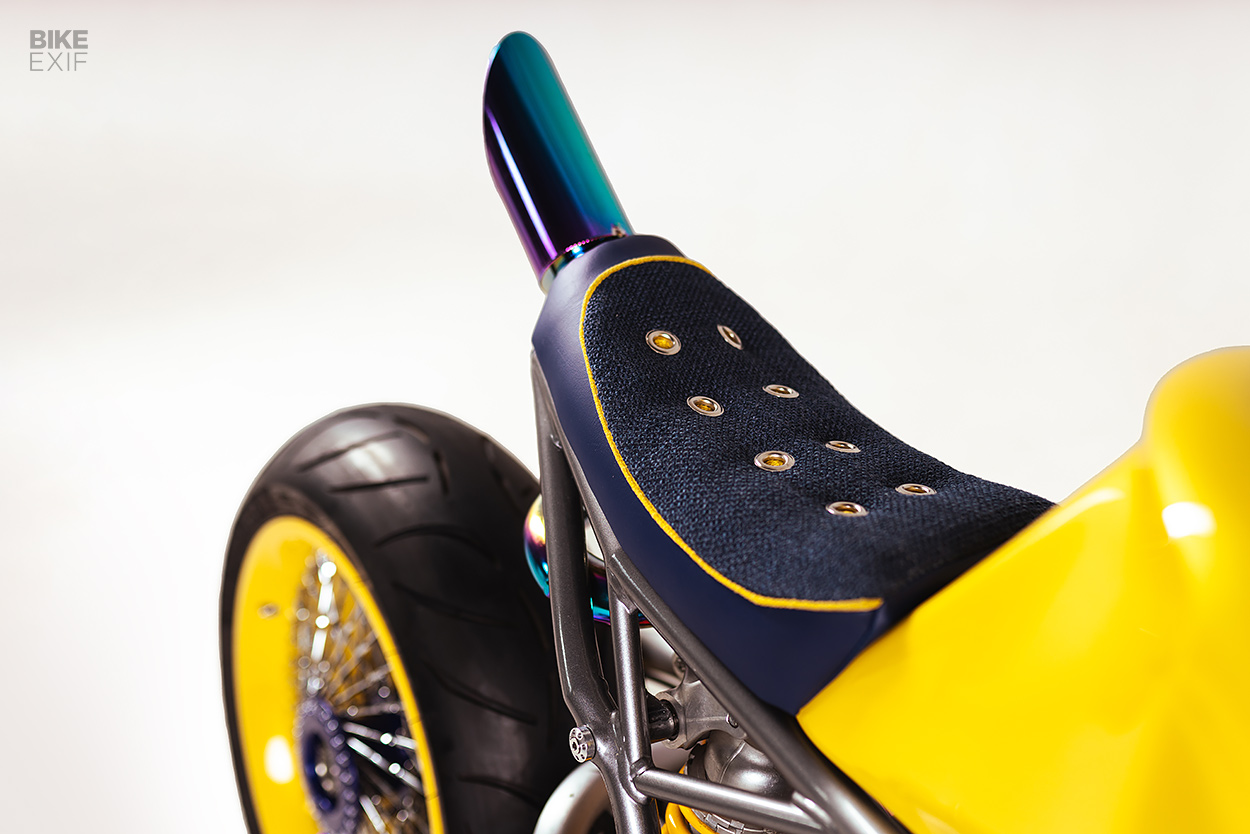 The custom rear swingarm wraps around a 7.5-inch wide back wheel, which Vitaliy made himself, with 48 spokes. Set off to the side is an unusual LED brake light, with shards of plastic set into a metal surround. 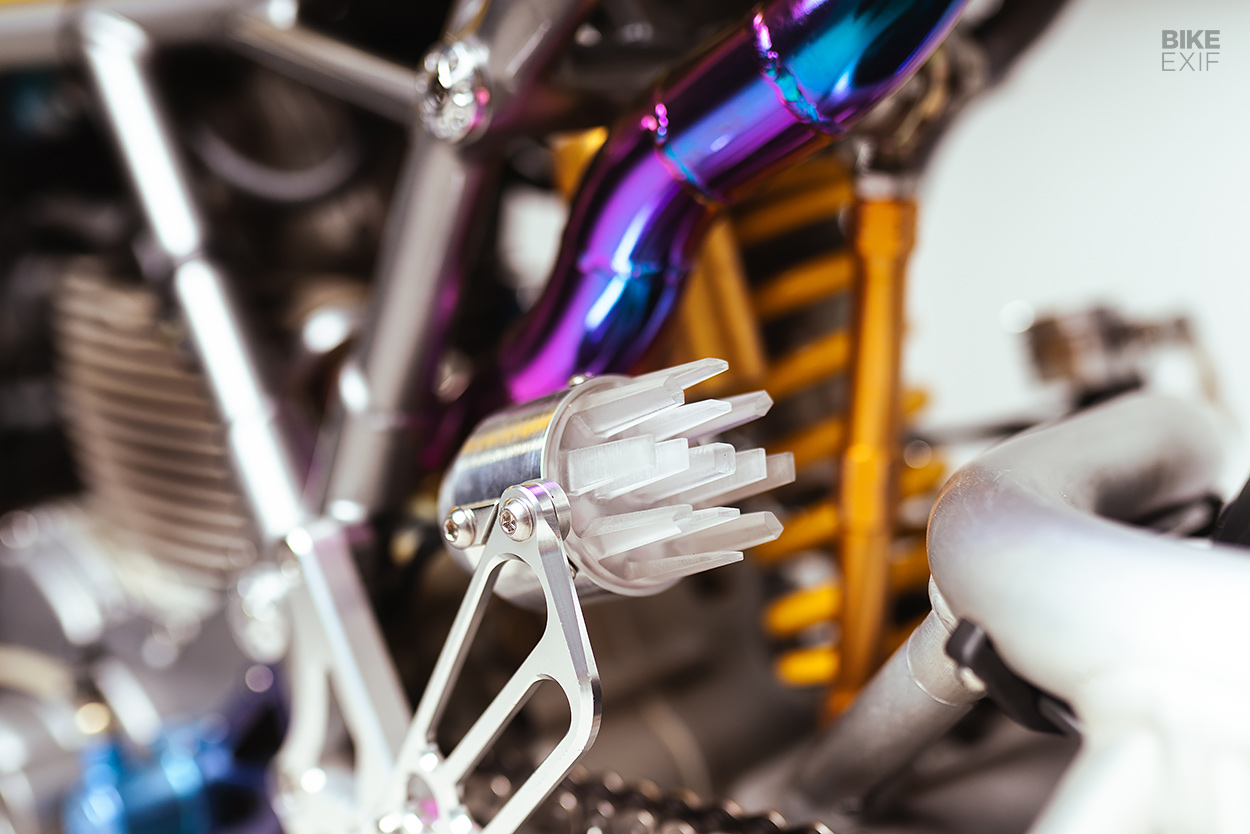 The shock and modified linkage are from a Hypermotard, but the floating brake rotor is an aftermarket fitment from Arashi, with twin Brembo calipers for maximum stopping power. It’s a virtual mirror image of the system used on the front wheel.

The tank is one of the few relatively conventional elements on this machine. “I really liked the original SS900 tank,” says Vitaliy. “Therefore we decided to keep the shape, but make it smaller.” 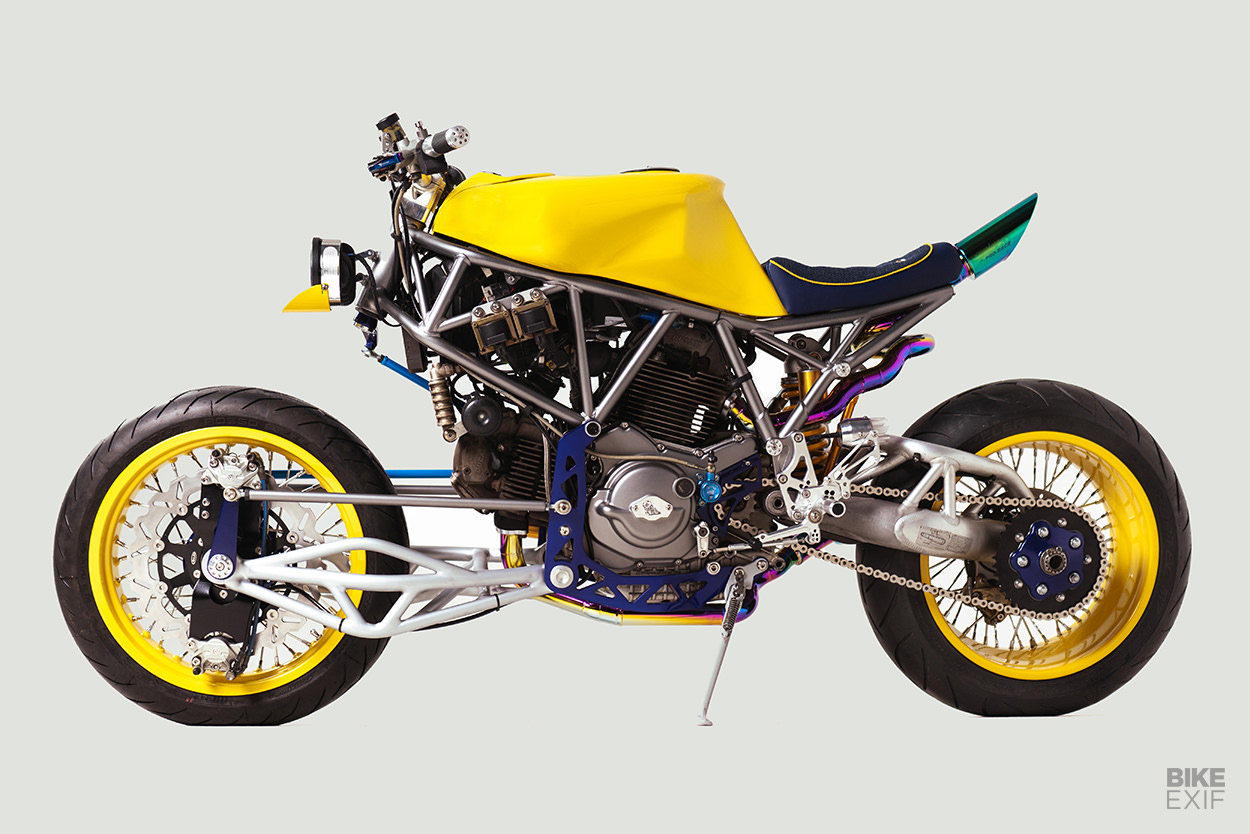 Leonid from the local fabrication specialist Driveinworkshop helped with this, welding up the aluminum. At the same time, Vitaliy stripped away the original Ducati dashboard and rewired it into a small Koso display set into the tank.

“It didn’t have an oil pressure lamp, so I 3D-printed one where the starter button goes.” He also manufactured a mirror, with polished stainless steel as the reflective element rather than glass. 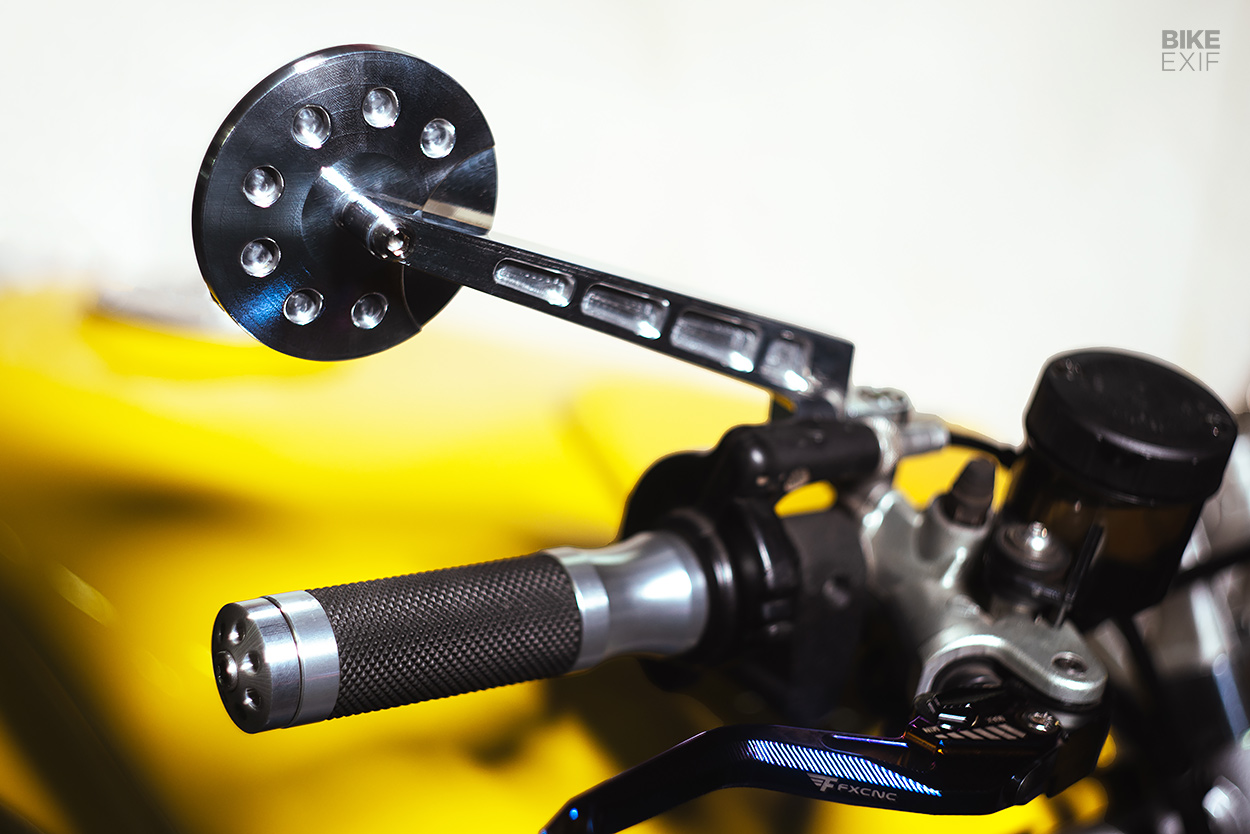 The vivid paint was handled by Anton at Octopus Art Aerografia. Apparently the trickiest part was not the multitude of small components and colors, but getting an aluminum-style finish on the front swingarm.

Vitaliy admits that he’s a bit of a ‘mad scientist’, but that’s fine with us. Bikes as extreme as this might not be for everyone, but they add a lot of color to the custom world—and prove that engineering can be fun, too. 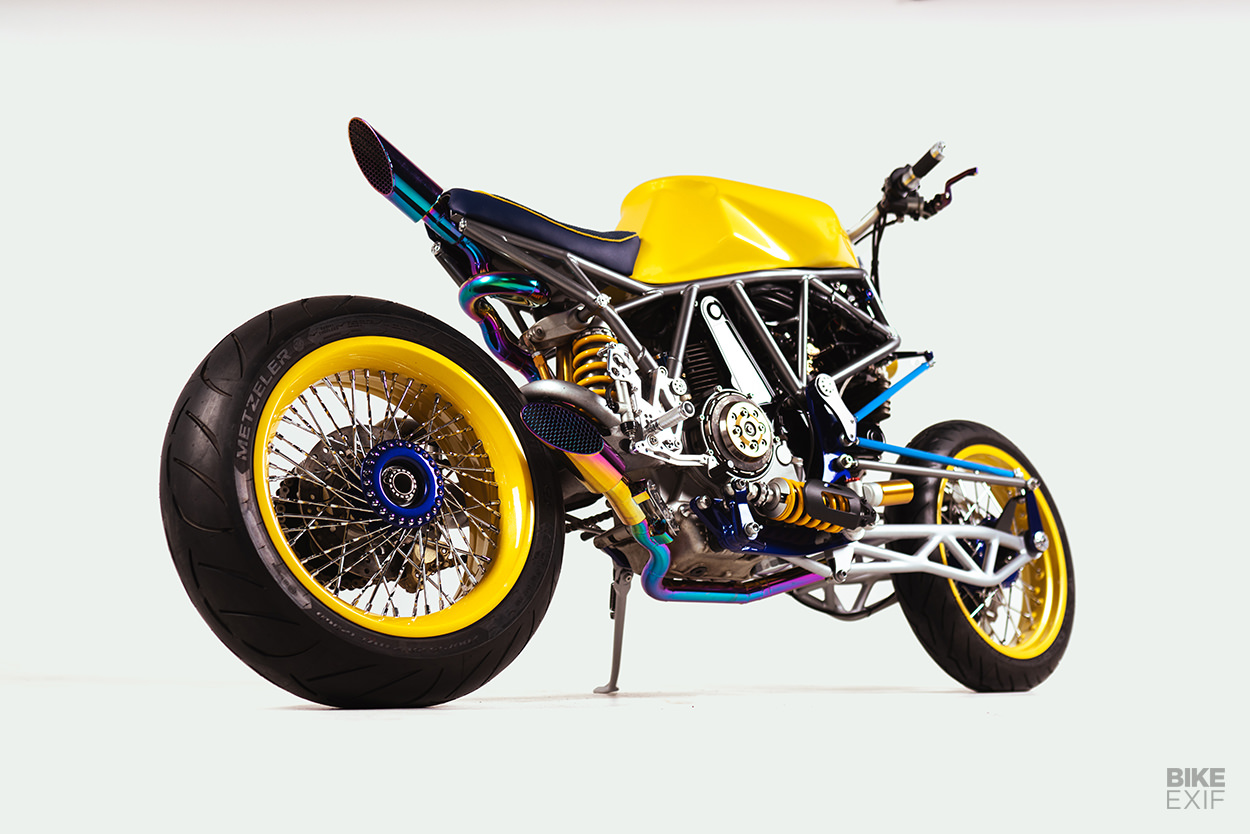