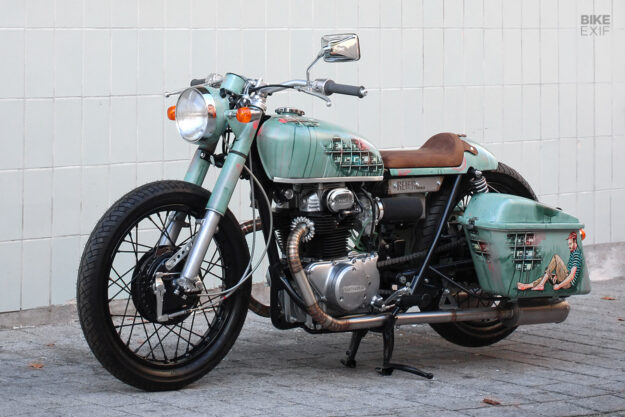 The results are always special when a professional custom builder sets out to create a bike for themselves. With no client brief on the table, it’s all about their own personality and proclivities. But it’s hard to pin Christian Reier’s tastes down—his latest build is a huge departure from his last, despite the fact that they were both personal projects.

Nicknamed the ‘City Surfer,’ this particular project started out as a 1969 Honda CB250K. Working from the Reier Motors workshop in the picturesque outskirts of Lamprechtshausen, Austria, Christian transformed the humble twin into a daily runner that’s part baby bagger, and part rolling art canvas. 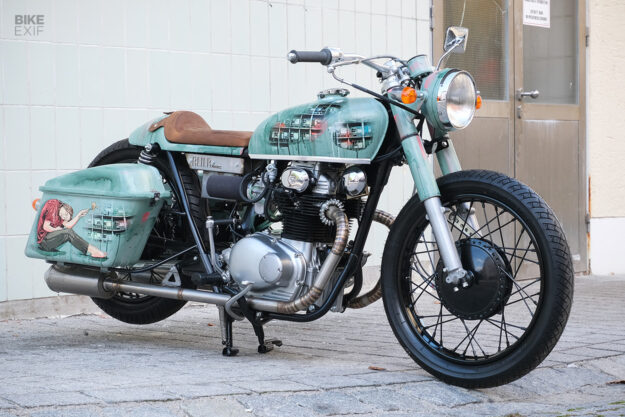 Christian started by fine-tuning the CB250K’s stance, by way of lowering the suspension at both ends. There are still a few inches of travel, but not much more, which speaks volumes about Austria’s road maintenance regime.

Next, the subframe was cut down to make it as short as possible. Christian hammered out a seat unit from 0.75 mm thick sheet metal, and had the saddle trimmed in brown leather. Held in place by three press studs on the back, the saddle hinges forward to reveal a stash spot under the rear hump. 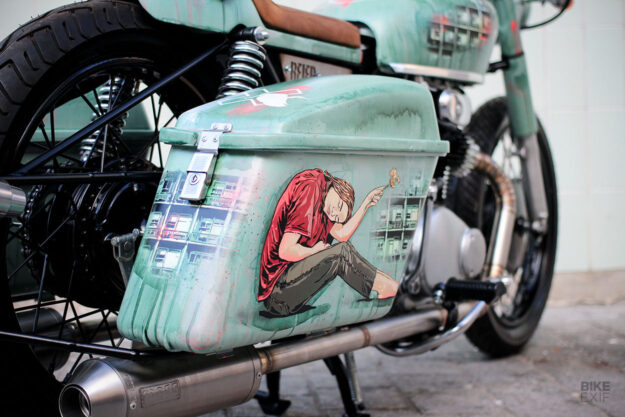 To further improve the bike’s convenience factor, Christian welded up a custom rear rack to hold a pair of fiberglass panniers, scalped from an old Harley. The rack was tailored to the cases, so that they could be attached without any additional modifications.

They’re the perfect addition to a city bike, especially if you shy away from wearing a backpack while riding. And since both the bike and panniers are slung low, they definitely won’t be in the way when you sling your leg over the seat. To keep things street legal, the pannier frame also supports a Bates-style tail light, turn signals and a license plate bracket. 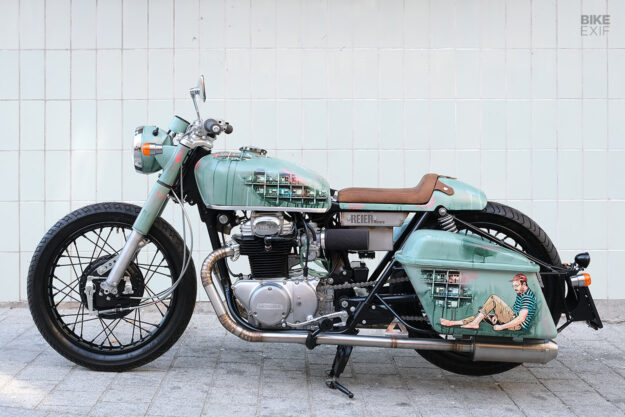 Peek under the seat, and you’ll spot a custom-made stainless steel box. That’s where all the electronics now reside, including the battery, wiring and relays. Flanking it are two overly large air filters from UNI, feeding air into a pair of Mikuni carbs.

The engine itself was stripped, rebuilt from the ground up and painted. The twin exhaust is also custom; the headers make their way down the length of the bike, and terminate in MASS mufflers under the panniers. 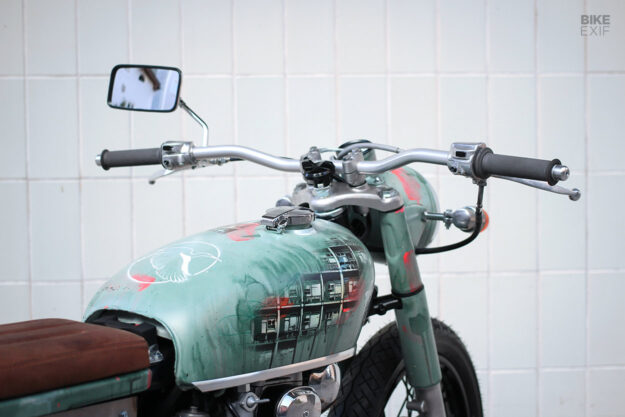 Up front you’ll find the original headlight and fork shrouds, with new turn signals and a set of low-rise LSL bars. The cockpit is beautifully simple, complemented by an MMB speedo that sits in a color-matched housing.

Before Christian turned to the Honda’s eclectic paint job, he had one more important item to tick off his list. The fuel tank that came with the donor bike was in far too good a condition to paint over, so he swapped it out for the tank from a newer Honda CB250. It has slightly softer edges than the original, making it a good match for the seat and panniers. 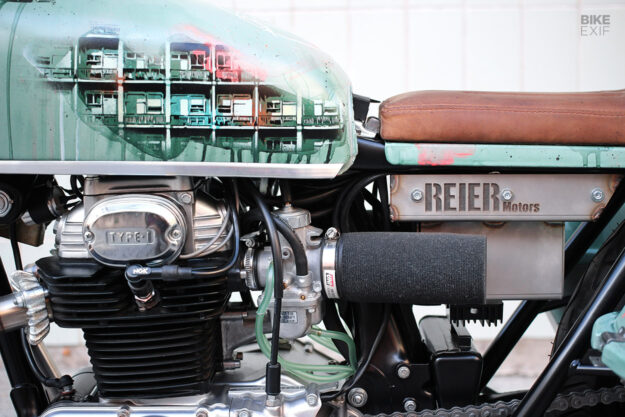 The stunning paint was laid down by an Austrian-French street artist couple, who go by Jana and JS. They like to use city-inspired motifs in their work, which Christian felt was perfect for the bike. That’s one good thing about fiberglass panniers—when it comes to artwork, there’s ample room.

The wheels and frame were painted black to make the artwork pop even more. The rest of the bike was treated to a full nut-and-bolt restoration, with clever little color-coded touches, like green fuel hoses. 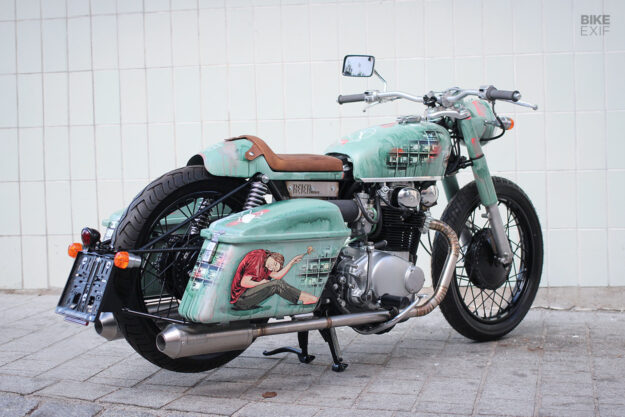 Christian has turned this staple Japanese commuter into a rather stylish, and practical, urban runabout. It’s small, lightweight and economical to run, even with the Mikuni carbs.

“The bike has very little suspension travel and is extremely low to the ground, which gives a pure riding feeling,” explains Christian. “The design stands out and really puts the Honda in the spotlight. The art of Jana and JS adds perfectly to its appearance.” 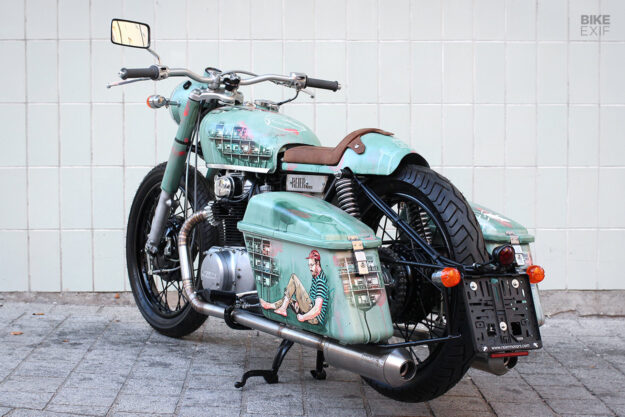 Even though this was a personal project for Christian, the City Surfer is now for sale. Just don’t send us out for groceries on it—we might be out for a while. 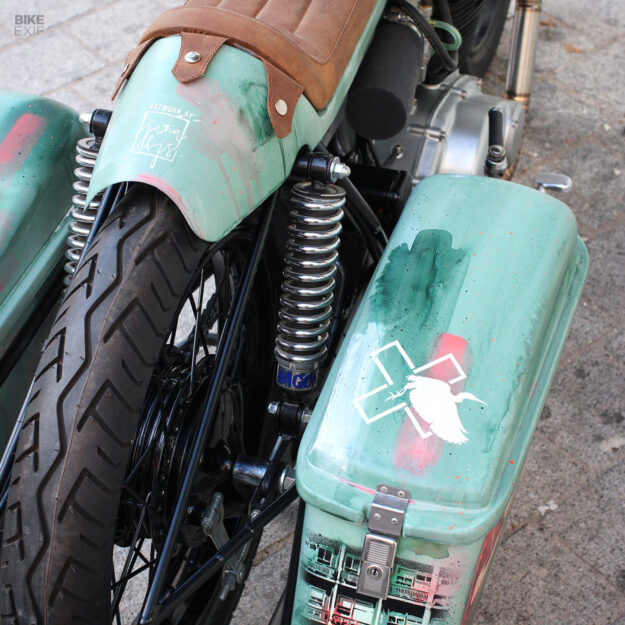