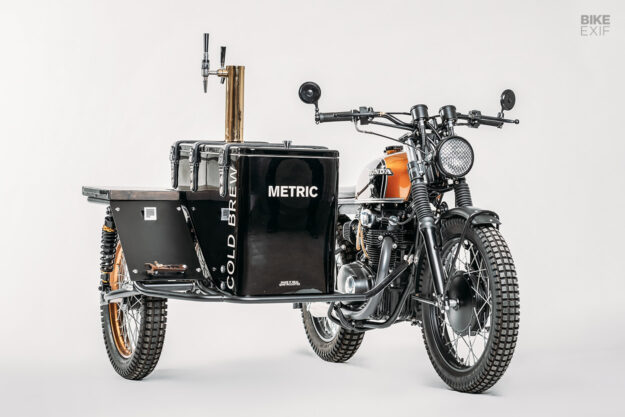 We’ve all been there: you stay up drinking with your buddies into the wee hours, hatching all sorts of genius plots that never live to see the sunrise. The way Mike Muller tells it, that’s how this Honda CB350-turned-sidecar coffee stand came to be.

The idea started when Mike’s custom bike workshop, Federal Moto, first moved into their Chicago-based garage. Over a few beers with their new neighbors and fellow business owners at Metric Coffee, the idea of a “cold brew-slinging sidecar motorcycle” was born. But both businesses were just getting their start in Chicago’s popular Market District at the time, so extra cash to fund the project was a precious commodity. 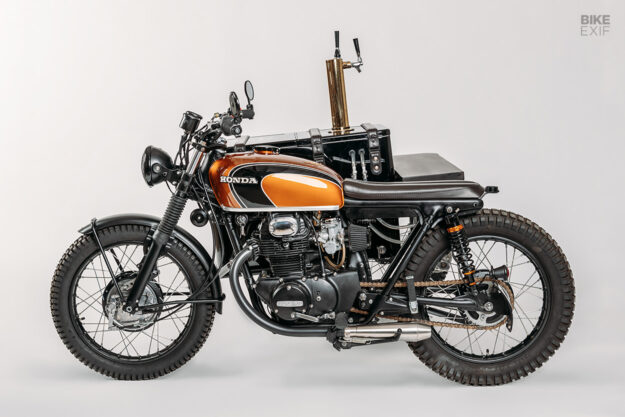 A few years passed and both businesses found their footing. The idea resurfaced, and the decision was made to make it a reality.

As for the donor bike, Federal Moto started with a 1971 Honda CB350—but stuck with a clean restoration rather than a radical custom. It was stripped down, and the frame was powder-coated black, as were the forks, wheels, and engine. 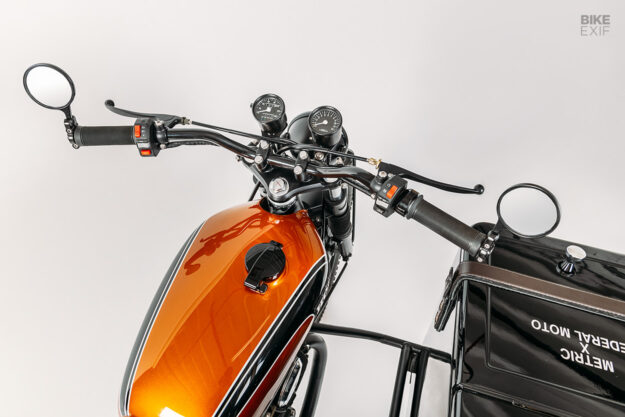 Most of the little details were given the all-black treatment as well. This CB350 now sports an all-black cockpit at the triple clamps, levers, and bars, with Biltwell Inc. grips and slim bar-end mirrors. The original chrome-bezeled Honda gauges were swapped out for minimalist (but still analog) gauges, also in black.

All of the lights and electronics were updated with cleaner, more modern units. The bulky stock tail assembly went in the bin, and Motogadget lights and signals were installed in its place. 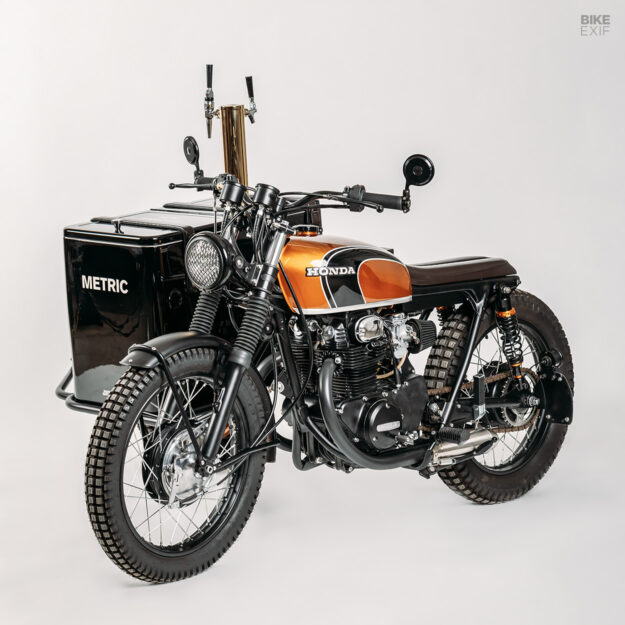 The factory airbox and side covers went next. The rebuilt Keihin CV carbs now wear pod filters, and the electronic bits have been repackaged in a custom tray under the seat. Exhaust duties are handled by a pair of custom megaphone mufflers, made by Cone Engineering out of Los Alamitos, California.

Federal kept things clean and simple with the CB’s engine as well. The original twin-cylinder motor was rebuilt to OEM spec, with the exception of oversized pistons and a Cerakote treatment for reliability. 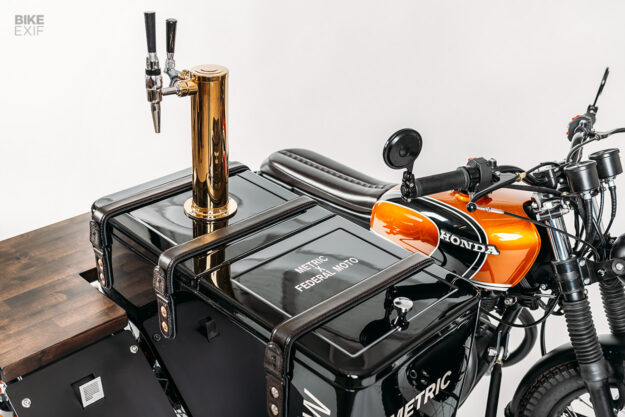 The original subframe was left intact, but the factory seat was scrapped in favor of a brown leather saddle, made by regular Federal collaborator Dane Ultech of Plzbeseated. Dane also made the matching leather straps that now adorn the cold brew cooler; another classy touch.

It’s a beautiful bike, but the real story here is the custom-built sidecar. This CB isn’t just some conversation piece that sits around the shop. It’s a fully-functional barista on wheels, that Metric Coffee employees ride (not tow) to events all around the Chicago area. 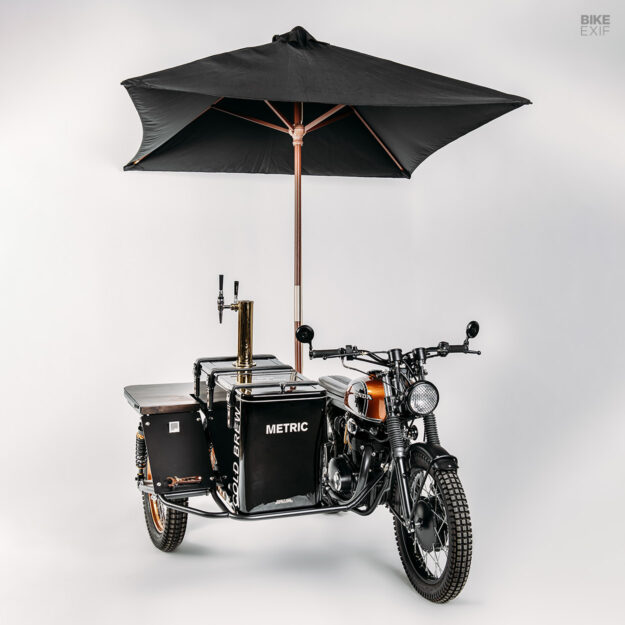 The setup is nothing short of genius. The massive cooler was custom made by Federal’s in-house mechanical engineer, Desmond Digiovanni, and built to the custom specs of Metric’s coffee kegs. The rig holds two full kegs of cold brew and plenty of ice to keep it chilled, with room left to accommodate canned drinks for folks on the go. 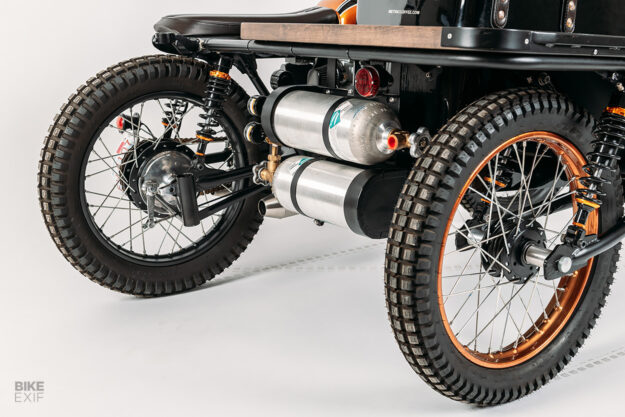 That’s all good and well, but truth be told it’s the dual nitrogen bottle setup in the rear that’s really got our attention. Is it legal? Who knows. Is it cool? Absolutely.

“Yes, for the haters out there: if you rear-end a nitrogen tank, it may blow up,” says Mike. “I guess motorcycles are dangerous… who knew!?” 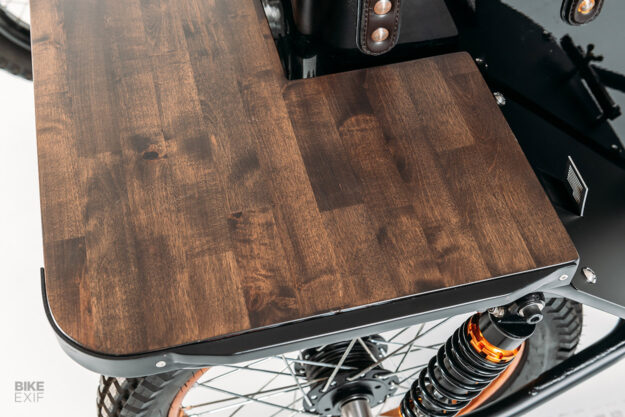 Tucked in above the tanks you’ll find a custom-built countertop, capped in butcher’s block and wrapped in a rubber bumper (you know, for rush-hour traffic). A laser-cut helmet holder was custom-made and mounted below, as was an anodized wrench that turns on the nitrogen bottles.

As far as the sidecar chassis that this rig rides on, you’re looking at a one-off custom, hand-made with help from Mike’s friend, Chris Zahner of Zooz Bikes. The entire unit is completely detachable, so the bike can be enjoyed on its own. And from what we’re told, this Honda is a good time with or without its sidecar. 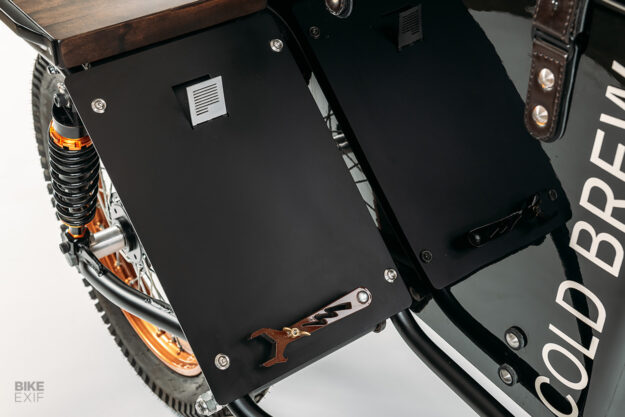 When the rig is fully loaded down though, the extra weight adds considerable “wackiness” to the handling, Mike tells us. So Federal fitted a steering damper to the bike, to keep it on the straight and narrow around town.

“Our favorite turn is left,” he says. “Sidecar wheelies!” 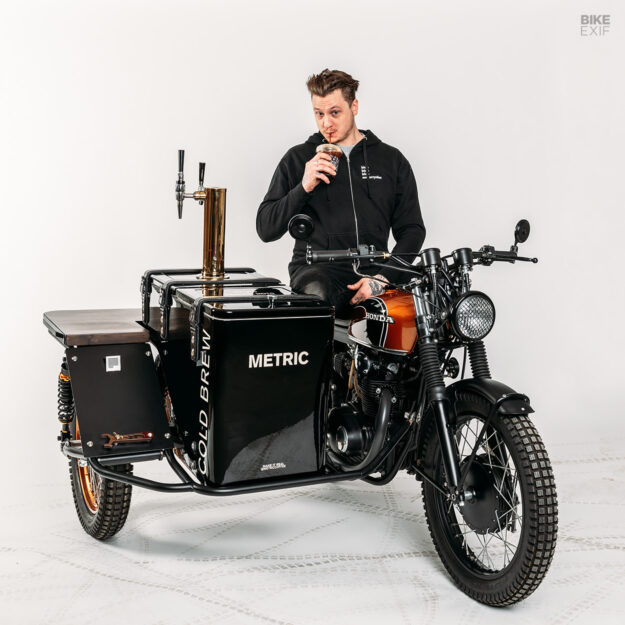 Anybody else want to see this thing run the 24 Hours of Le Mans this year? With this much caffeine onboard, Federal Moto stands to be the first outfit to run the full race with a single rider. And since it’s also capable of dispensing keg beer when called upon, it should be able to handle the post-race refreshments just as well. 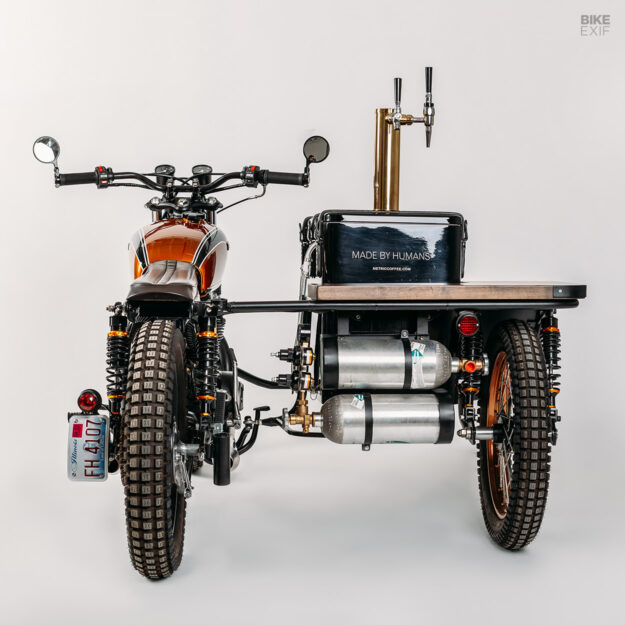