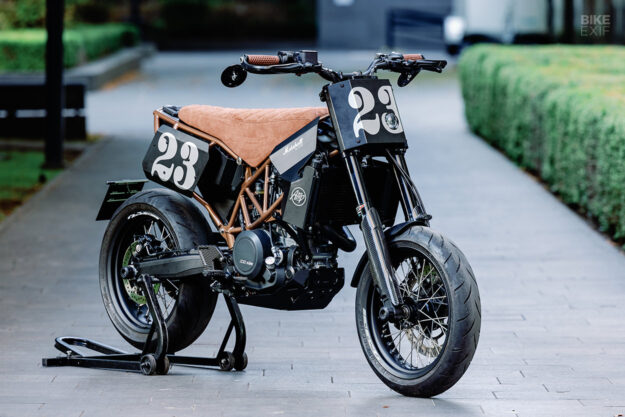 As factory supermotos go, you could do a lot worse than the KTM 690 SMC R. Featuring a 72 hp single packed into a taut 324 lbs package with sharp handling, it’s a bike made for unadulterated hooliganism.

The owner of this particular 2019-model 690 supermoto loved most things about it, save for one big gripe: it carries more plastic than a Tupperware salesperson. So he delivered it to the father and son team of Michael and Allen Posenauer, at AMP Motorcycles in Offenbach, Germany. Their task was to individualize it by ditching all the plastic bits, without sacrificing an iota of ridability. 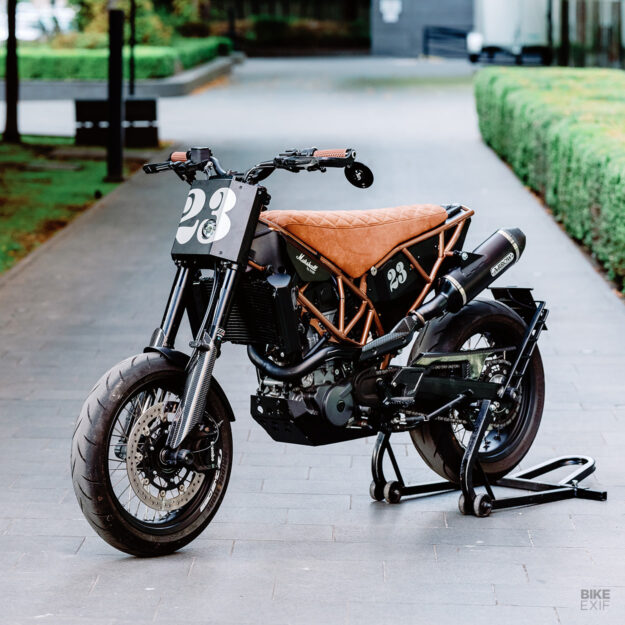 We’ve had a close eye on the Posenauers since they broke onto the scene. Building custom bikes started out as a hobby for them—an excuse to spend time together. But word soon spread, and they eventually started taking on commissioned work.

They also have a love for flat-track racing, and a penchant for building pared-back, purposeful machines. So the brief on this KTM was right up their alley. 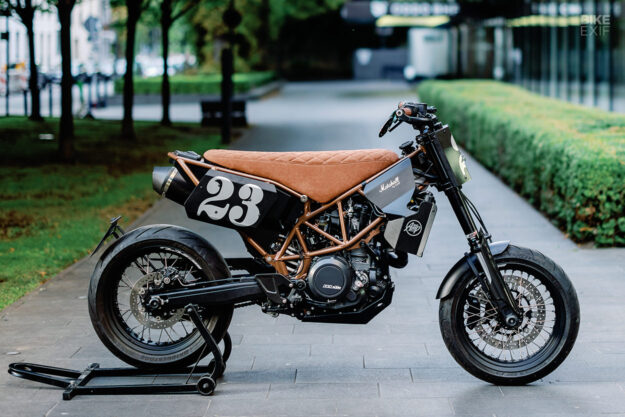 That doesn’t mean that the job wasn’t without its challenges though. The SMC’s plastic-ness is more than just skin deep—strip the bike down, and you’ll find a plastic under-seat fuel tank that also doubles as a subframe.

AMP had to do more than a traditional cut-and-shut to get the look their client was after. First, they designed a bolt-on steel subframe that carries over the sporty aesthetic of the trellised front half. Then came the really hard part—fabricating an aluminum fuel tank to side inside it. 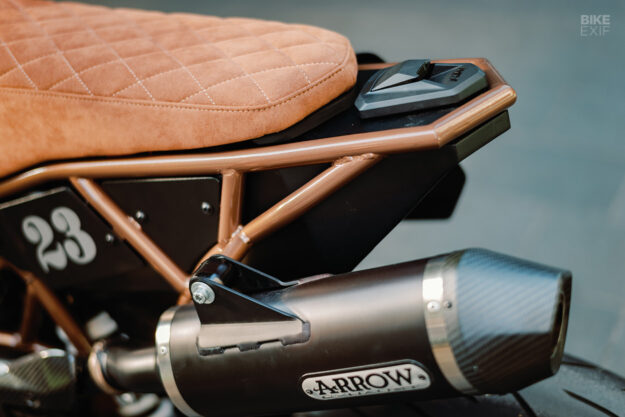 They pulled it off handily, while also managing to accommodate the OEM fuel pump and level sensor. And they managed to retain one little piece of plastic—the original KTM filler cap. Take a closer look, and you’ll notice that the cap, rear loop and reservoir all follow the same triangular form.

Next, AMP shaped a handful of aluminum blank-off plates to hide the 690’s innards. 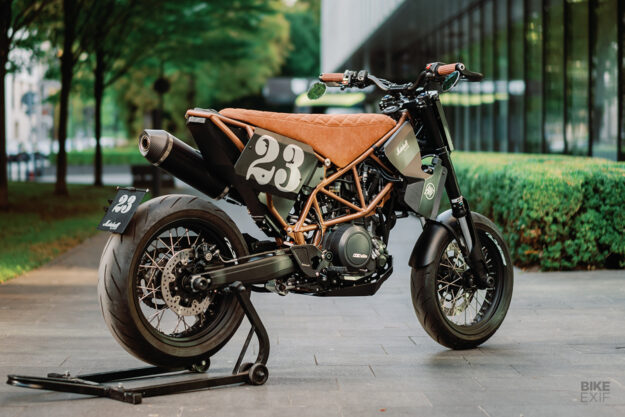 It’s an asymmetrical set; the exhaust side features smaller pieces tucked into the subframe gaps, while the right side wears one big racing number plate. The front ‘wings’ and radiator covers are split on the left, and integrated on the right.

That number board isn’t just for show either. The bike’s owner likes taking the occasional bike trip, so it pops off to reveal a mounting frame for a side bag. 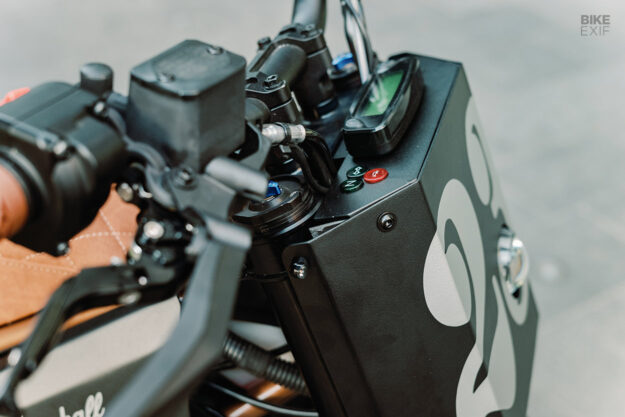 Up front is a boxy headlight nacelle that doubles up as a housing for the dashboard. A Highsider LED pokes out the front, with the stock 690 speedo integrated up top. AMP took this consideration one step further, and also transferred the original LED warning lights to the new cockpit.

Just behind the dash sits the original bars and switches, matched to new hand guards, CNC-machined controls and Vans grips. The turn signals (mounted to the sides of the headlight board) and bar-end mirrors are from Motogadget. A stealthy smartphone mount sits lower down, just aft of the bars. 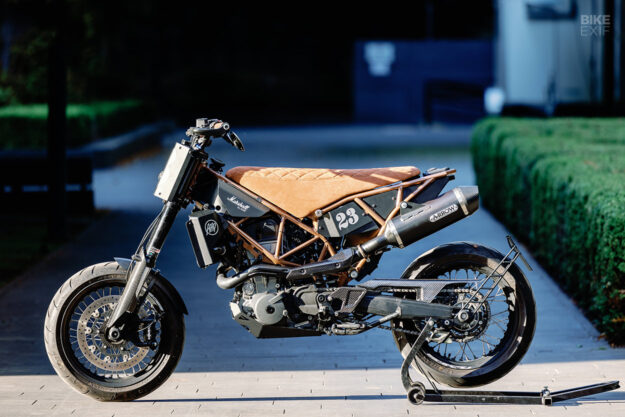 The flat track influence is clear here—but AMP didn’t want to go all-in on it, for fear of losing the 690’s lively setup. So they retained the stock suspension, wheels and brakes. Even the seat is the same height and length as before, despite its apparent heft.

Remove it, and you’ll notice that the side sections aren’t fully padded. AMP designed them to wrap around the KTM’s stock air box; the client requested that they be upholstered instead of blacked-out. 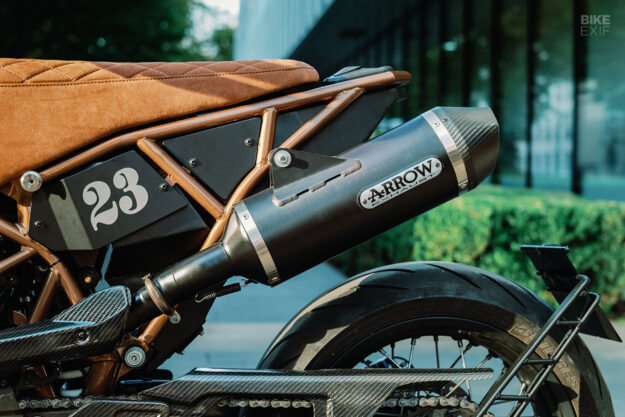 Other upgrades include an Arrow muffler and a burly sump guard, and a smorgasbord of carbon trim bits. The front fender and its mounting bracket are custom, as is the rear-mounted license plate bracket, which also wears a pair of Motogadget taillight and turn signal combo LEDs.

AMP’s client nicknamed the bike ‘Marshall,’ which probably accounts for why the color scheme is reminiscent of a vintage guitar amplifier. The frame’s been finished in Porsche’s Cognac Metallic paint, with the seat covered to match. A judicious use of black powder coating drives the point home. 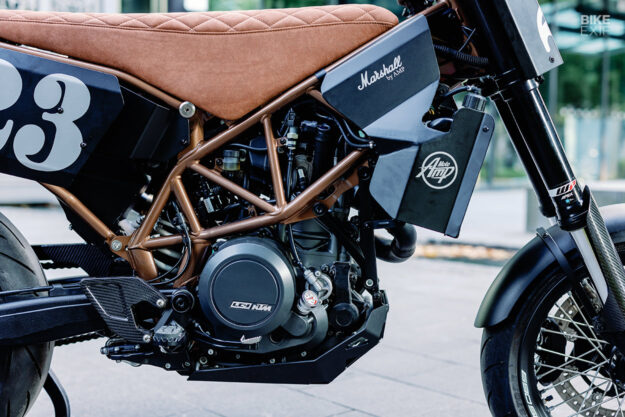 The line between supermotos and flat trackers is very fine, and this purposeful machine straddles it well. It reportedly rides as good as it looks too, which makes our hearts happy.

We’re already visualizing the roads we’d love to unleash this angry beastie on. 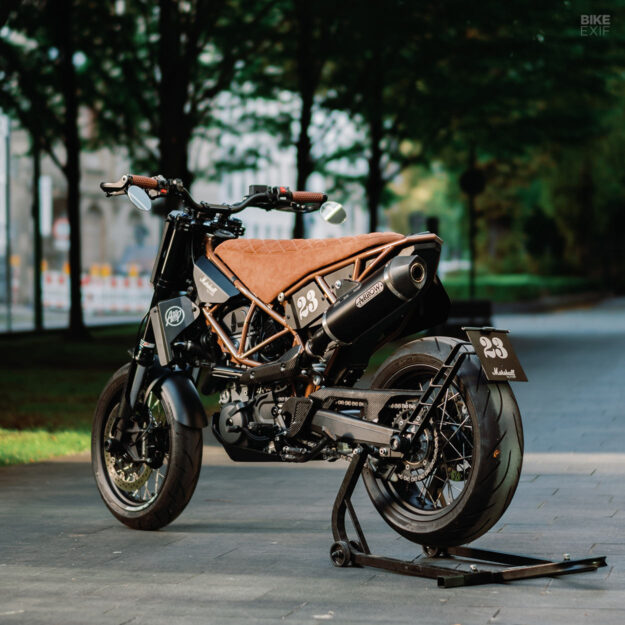