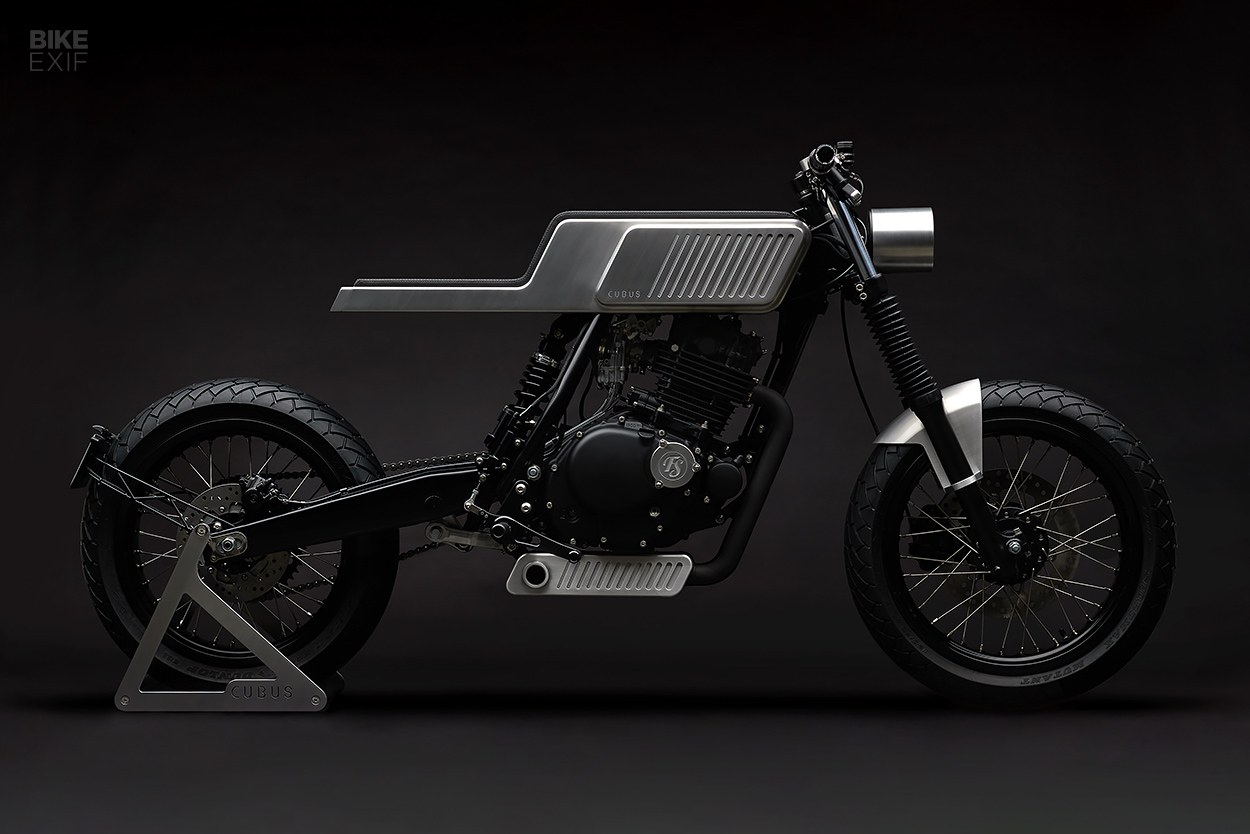 Slavo Danko’s one-man custom motorcycle shop has the most appropriate name in the biz: Free Spirit Motorcycles. He marches to the beat of his own drum, building bikes purely for the satisfaction of it, with no-one telling him what to do. Which explains why this Suzuki GN250 took almost four years to build, went through three different designs, and looks like nothing else out there.

Based in the small village of Zohor, just outside Slovakia’s capital, Bratislava, Slavo works as a business strategist for a major advertising agency. But on Thursdays and Fridays he builds bikes, often aided by his son, Matúš. 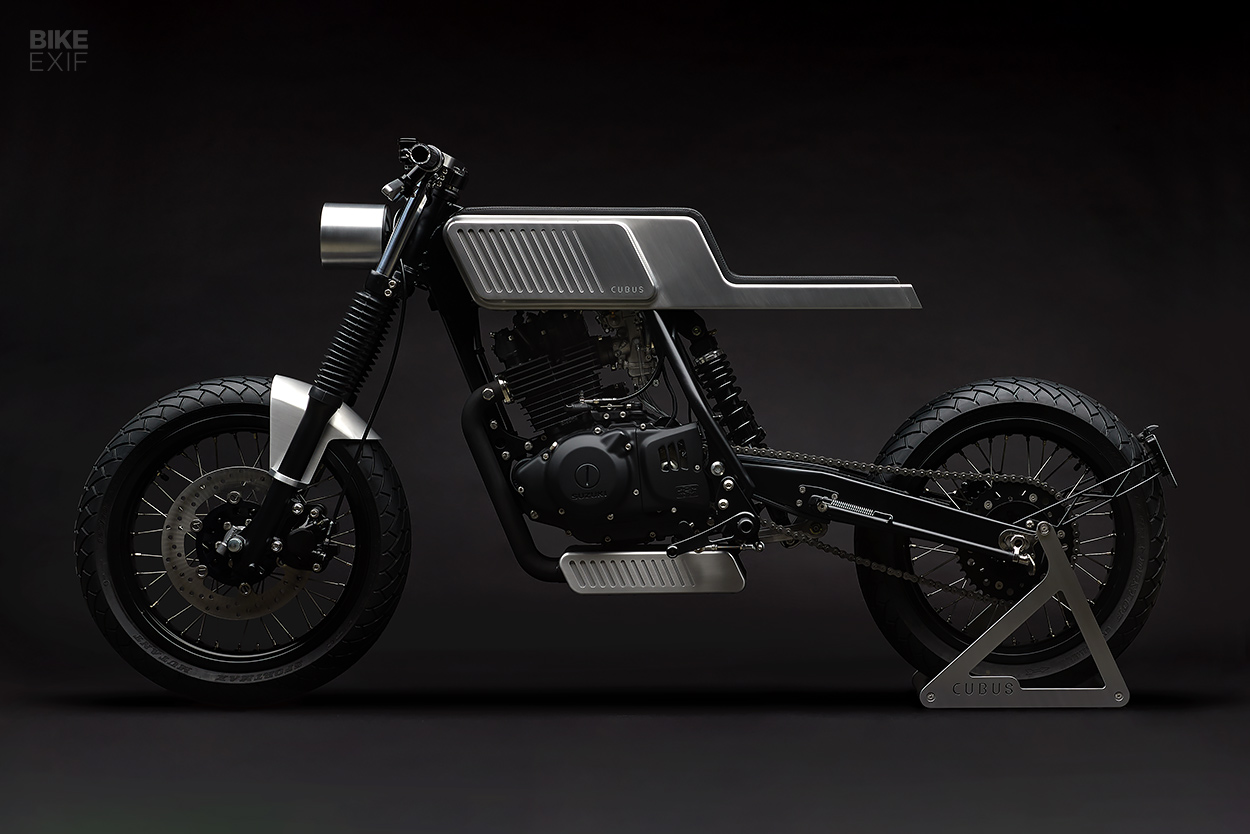 “He helps me when he can, but he’s more like an opponent,” explains Slavo. “Since FSM is just a one-man show, I need a buddy to give me a second opinion—and Matúš is a product designer, so his opinion is valuable. I need that tension and positive discomfort to push things forward.”

Slavo certainly pushed things forward on this project. All that remains of the Suzuki GN250 is its engine, some of its frame, and the front forks, brake and wheel hub. Everything else was scalped from elsewhere, redesigned or built from scratch. 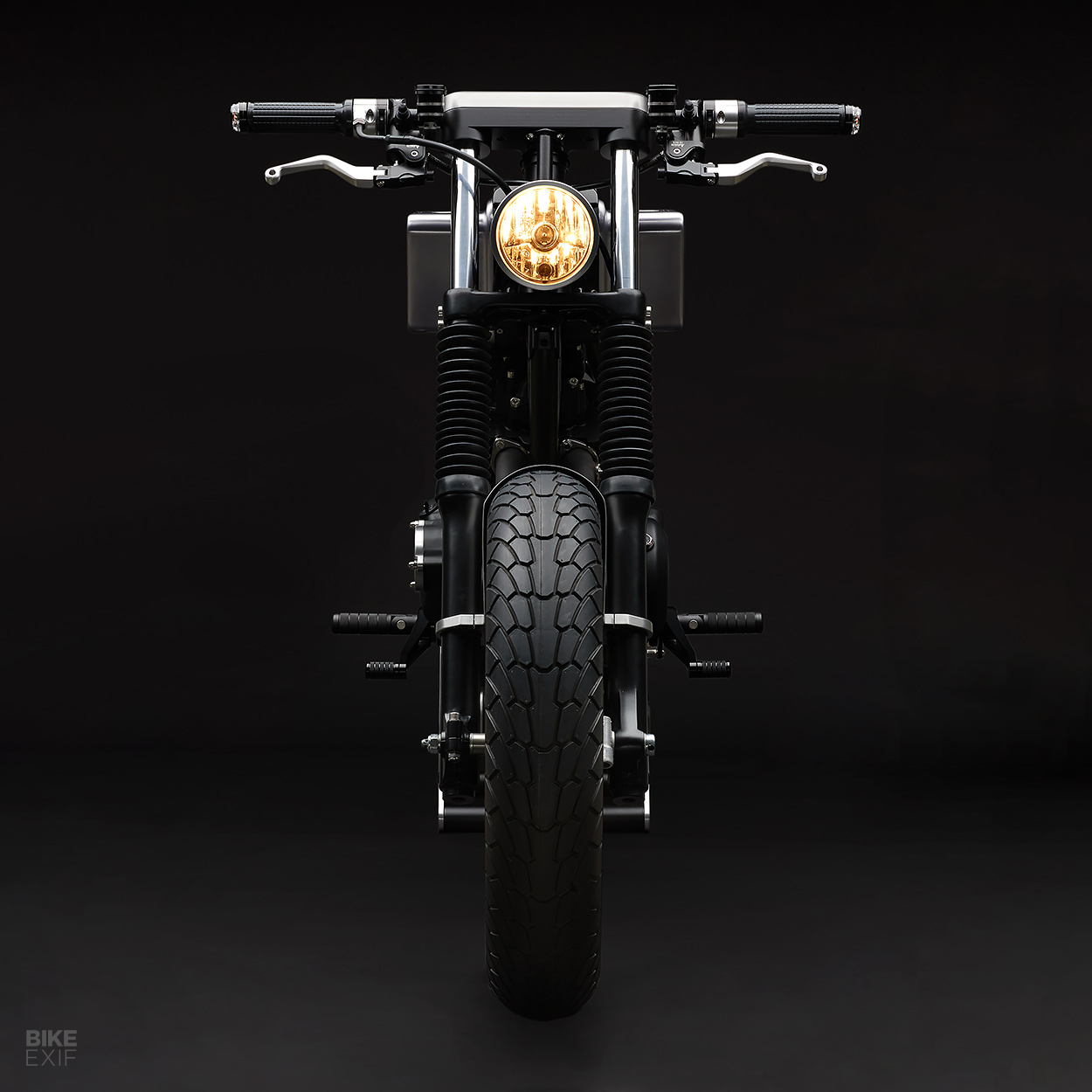 Getting the GN250’s stance right was high on the list, so Slavo started by sourcing a pair of 17” rims from a Suzuki DR-Z400 supermotard. He laced them up to the GN250 front hub, and a rear disc brake hub from “some Italian bike” that he had lying around in his workshop. The stainless steel spokes were custom made by craftsmen in the small Czech town of Hvězdonice.

Slavo fitted more supermoto bits: a set of Dunlop Mutant tires, and the swingarm from a Husqvarna SM 125. “It accomplished two things,” he explains. “It extended the entire bike so that it didn’t look so settled, and it got rid of the two rear shocks that didn’t fit into the clean design I had planned from the beginning.” 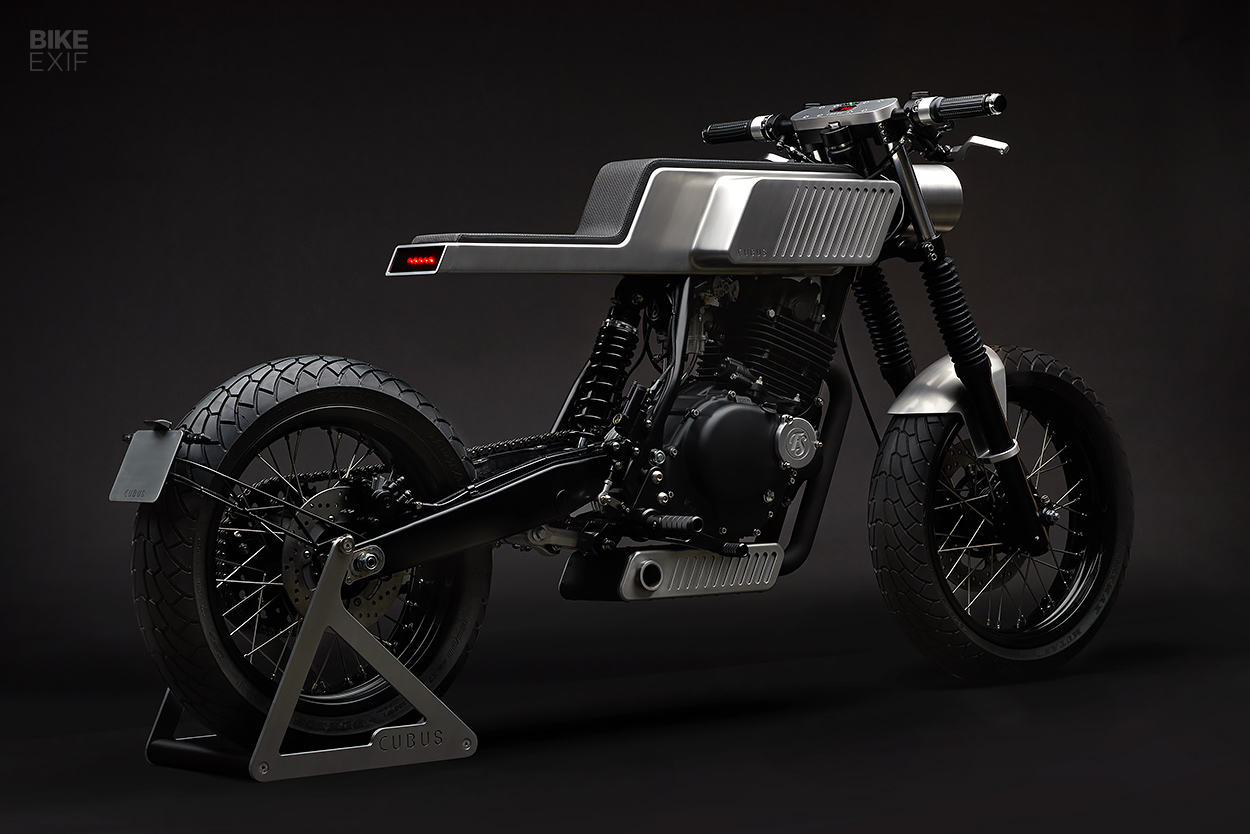 Executing that clean design ended up being the toughest part of the project. Slavo had started with a 2D sketch, but soon realized that “reality is 3D, not 2D.” Which is why it took so many tries to get it right.

Each time, Slavo would alternate between fabricating a frame to anchor the bodywork, and building cardboard mockups of the various pieces. He hit pay-dirt on his second frame and third cardboard mockup—so he started over one more time, and built the final frame. 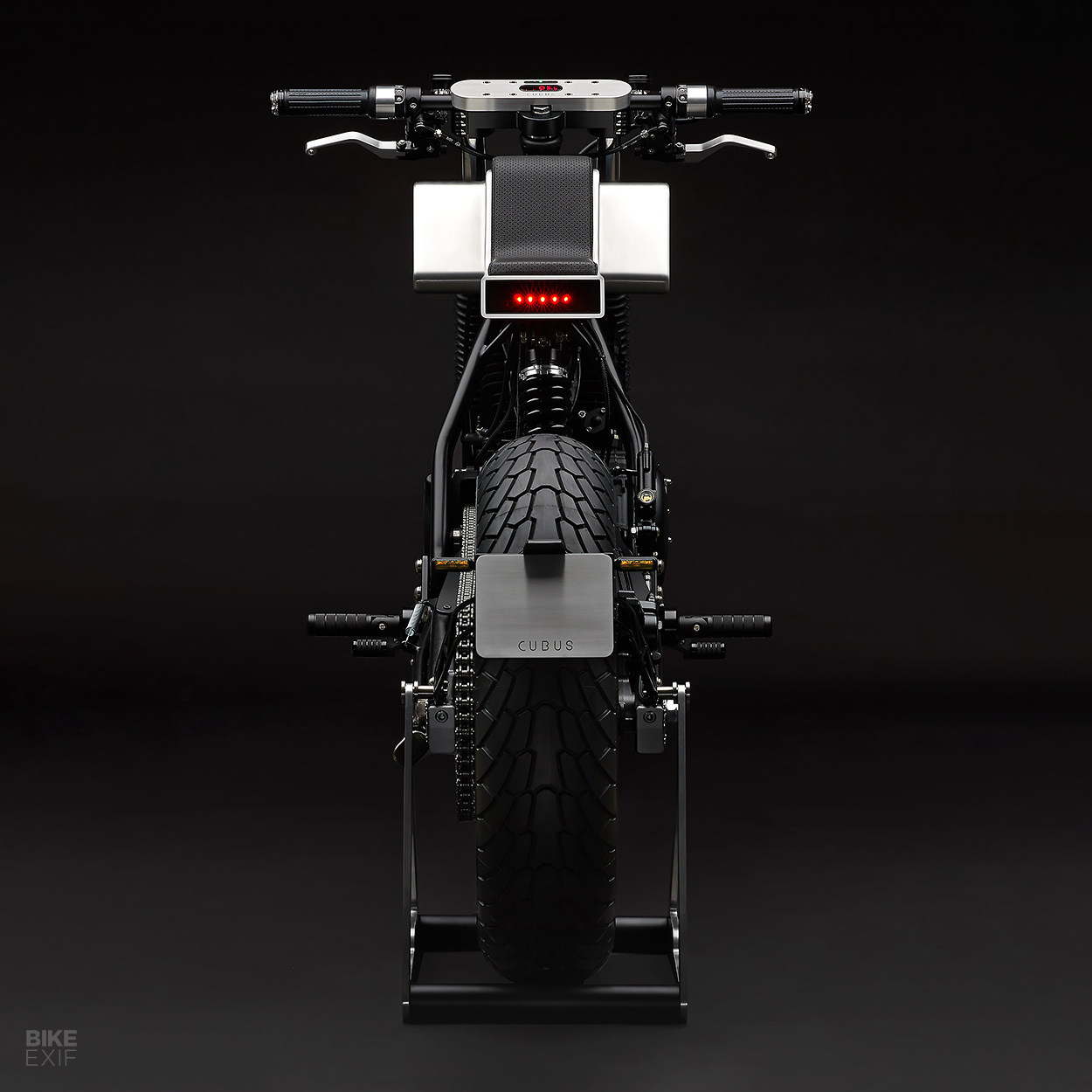 Hiding underneath the bodywork is a lattice frame design that not only supports the floating seat, but holds all the electronics too. Packed in there are a Motogadget mo.unit control unit, a Lithium-ion battery and the Suzuki’s OEM electric bits.

The body looks like a monocoque, but it’s not—the tank is actually two separate pieces, that fit together with the seat like a giant Meccano set. Slavo used a combination of old and new techniques to create the aluminum bodywork, by CNC-machining some parts and hand-forming others. Then he welded everything up, and ground away at the welds until the whole arrangement looked seamless. 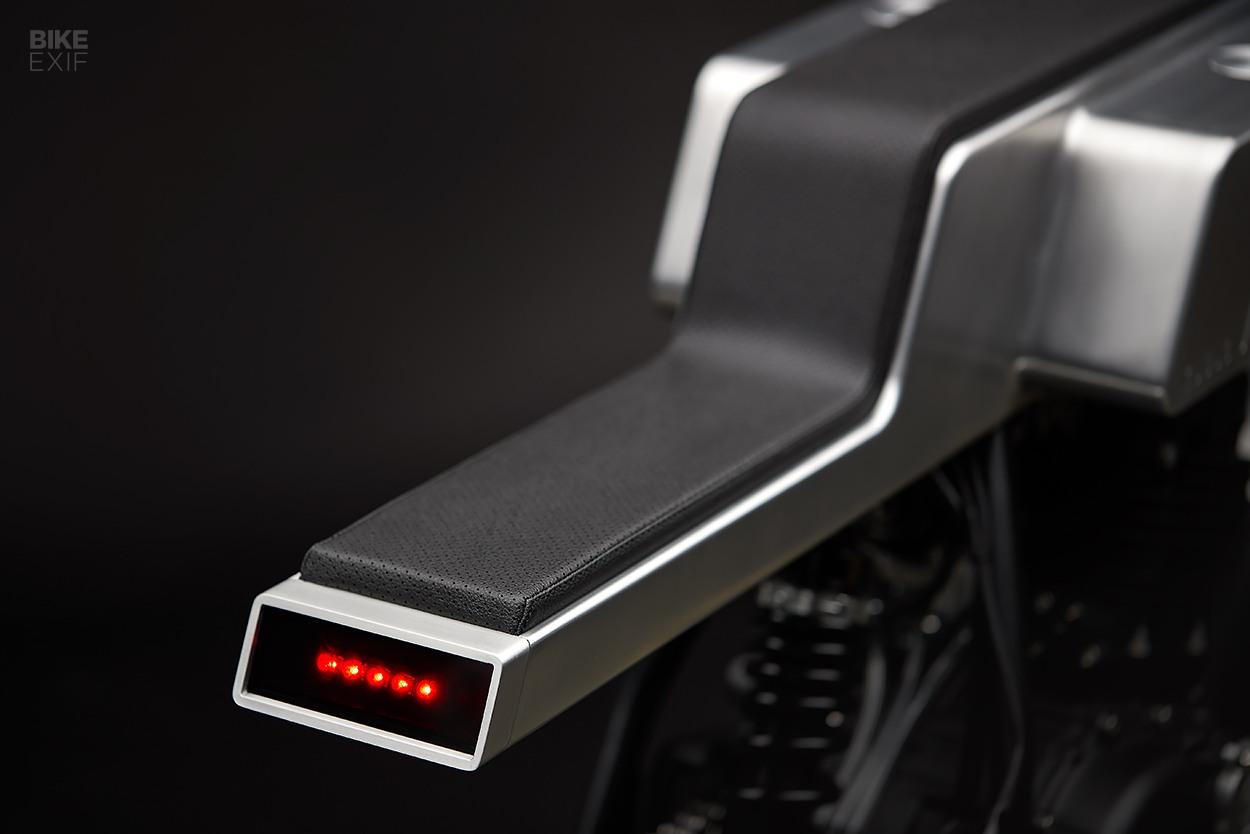 The seat attaches by sliding into the gap between each fuel tank’s side plate, and bolts down with just two fasteners. It’s padded with a few layers of rubber foam, and covered with a perforated synthetic leather. An integrated LED light at the back caps it off, covered by a plexiglass lens.

Slavo echoed the tank’s design lower down by CNC-machining a matching cover for his custom-built muffler. “I had to learn how to design in 3D software,” he tells us, “so as not to bother Matúš with every single detail. It completely changed my life—from then on, I was able to implement my ideas immediately!” 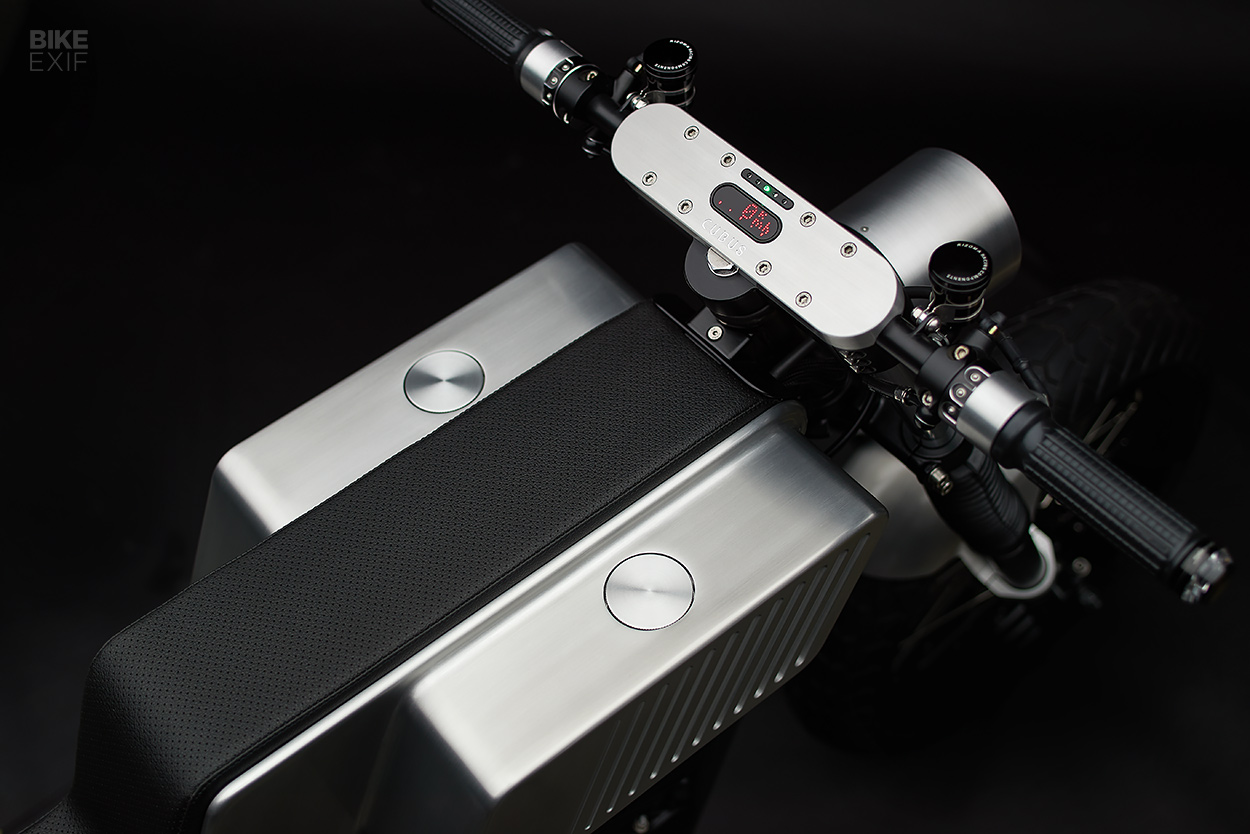 There’s more CNC work and visual trickery in the cockpit. The handlebars look like one piece, but they’re actually a split design, mounted to custom yokes. An aluminum dashboard holds a Motogadget speedo and the bike’s dummy lights.

Slavo fitted Motogadget switches, grips and bar-end turn signals too, but couldn’t find a throttle that would fit cleanly with them. So he made his own to perfectly match the switch housing diameter—then he made a matching ‘collar’ for the clutch side, and machined his own levers. 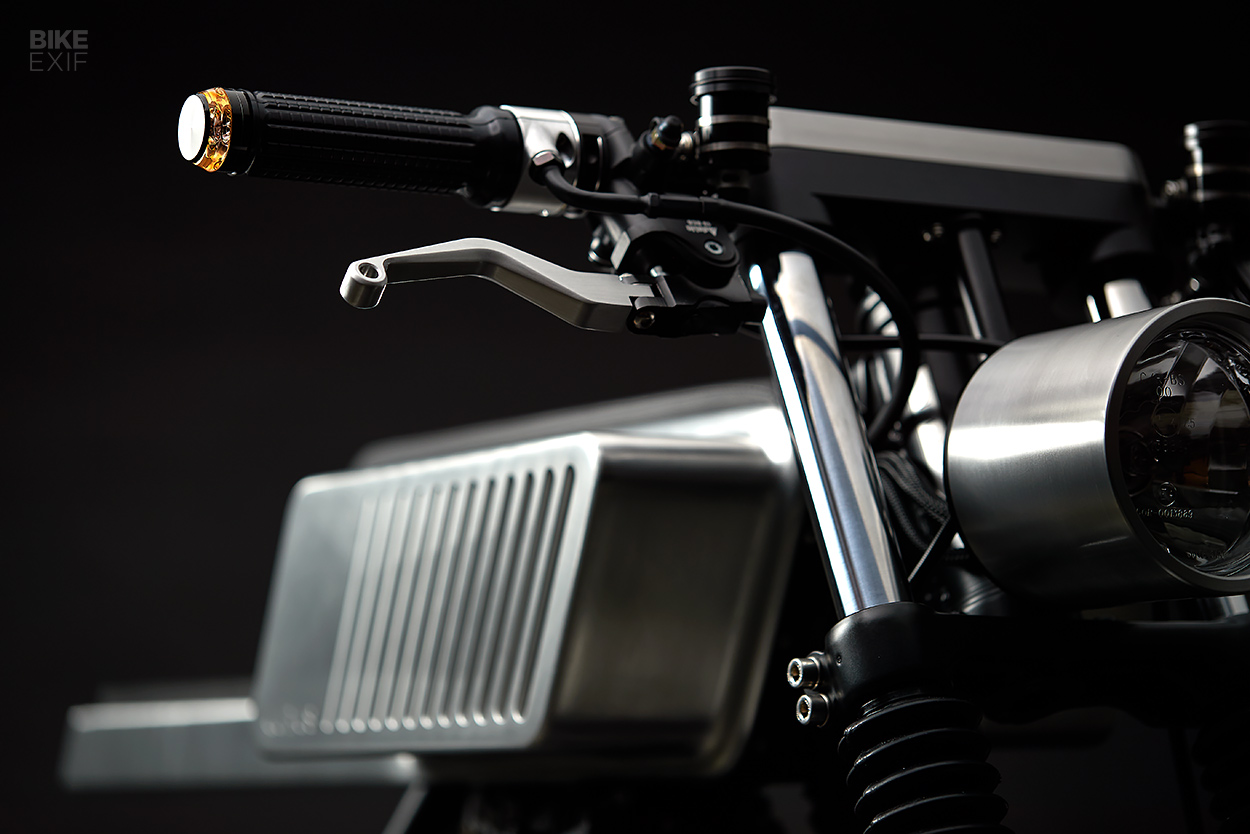 Even the headlight is custom… mostly. Slavo bought a CE-approved headlight, CNC-machined a new housing for it, and rolled the outer cover out of aluminum. The front fender was made in the most old school way possible: using a hammer, sandbag and English wheel.

Slavo went so far as to build his own fuel tap system, so that he could keep the tank looking sano. Hidden underneath is an electro-magnetic valve that opens when you switch the bike on via its keyless RFID ignition. There’s a manual override too, just in case. 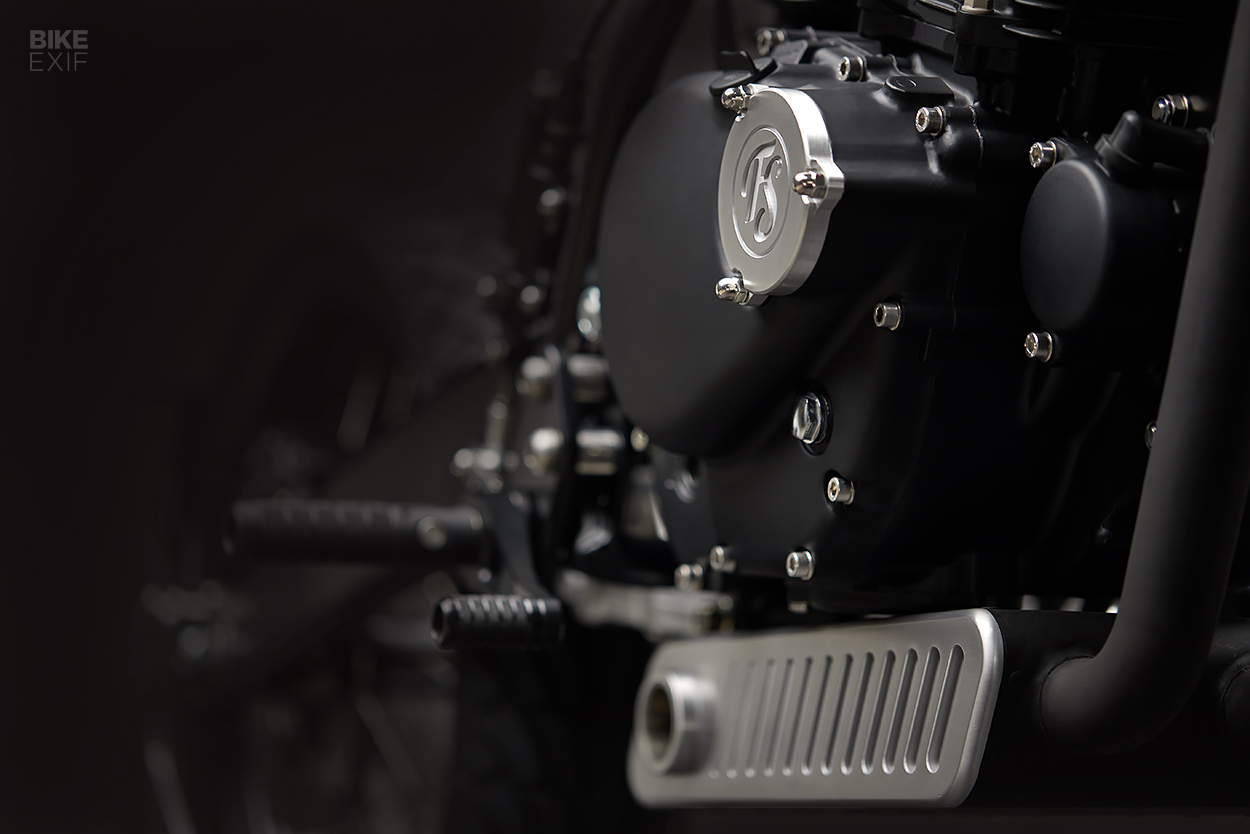 Naturally the GN250’s motor was rebuilt too, and treated to a matte black coating, a new Mikuni carb, a hydraulic clutch and a custom oil filter cover. Slavo credits Vagabund Moto for their advice here—and Cognito Moto for the bike’s new foot pegs.

For the final finishes, Slavo wanted to show off the metal without it oxidizing. So he scuffed it up with a Scotch-Brite pad, and used a clear Cerakote coating to protect it. 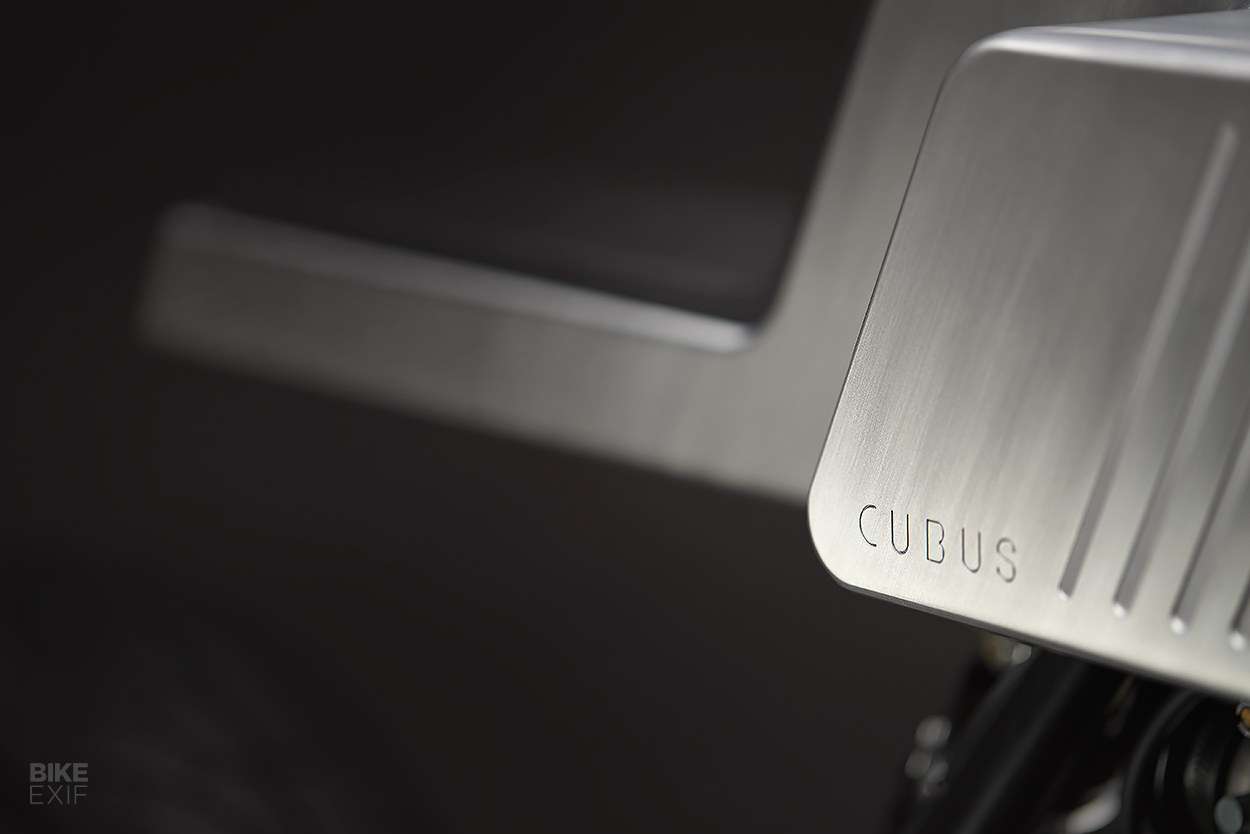 Dubbed ‘Cubus’ for obvious reasons, the Suzuki GN250 is a huge step outside Slavo’s comfort zone. He admits that the unconventional, geometric aesthetic won’t appeal to everyone… but he’s not too fussed.

“You can take the paved road and do slight customizations with expensive and fancy parts, and make dozens of those to please every bike lover. Or you can take the hard road: be bold and be yourself, but be ready for polarized opinions. I would never be able to make a copy of another bike—that would be a waste of my time on this planet.” 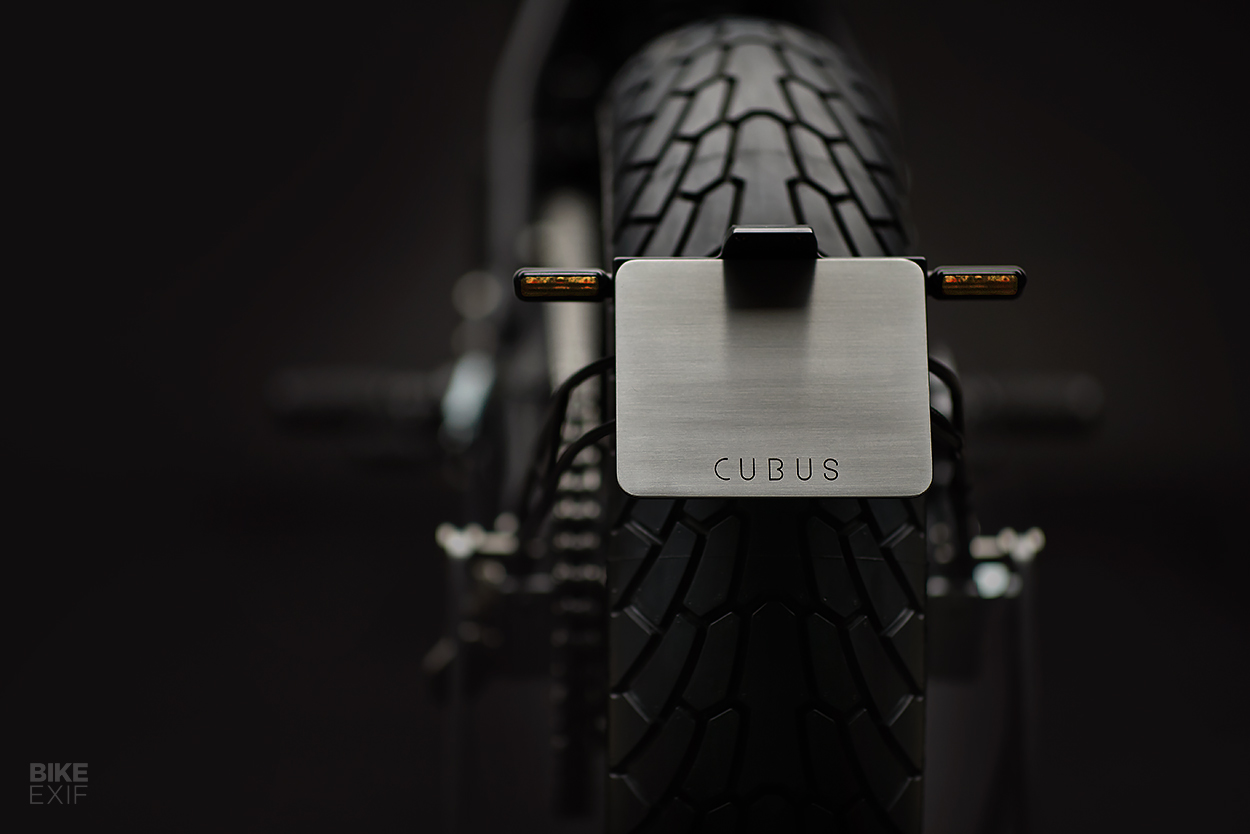