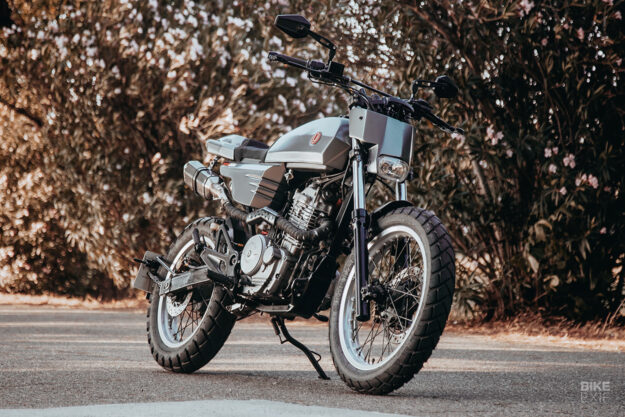 Do you remember what first piqued your interest in custom motorcycles? Santi deWolf does; it was a Honda CB café racer, built by Dustin Kott, that he spotted online about seven years ago. And it set him on the path to becoming a part-time custom builder himself.

“I instantly fell in love with the purity and simplicity of the bike,” Santi tells us. “That lead me to find Bike EXIF, and I went through absolutely all your content in a couple of weeks… which is quite an accomplishment. I became obsessed with this movement that I had no idea existed.” 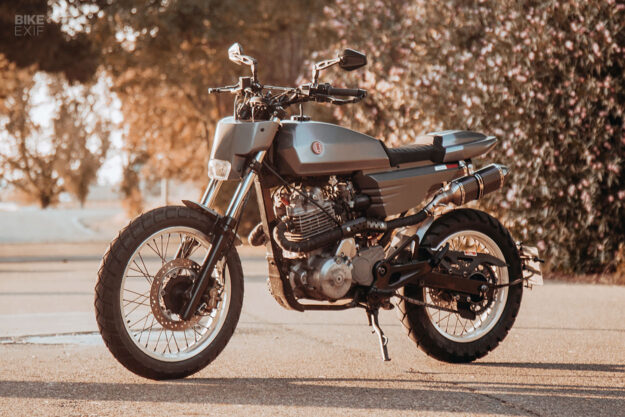 Santi’s a mechanical engineer by trade, and works as a product developer for a major household appliance brand. But ever since he got hooked on the custom scene, he’s spent his spare time working on bikes from his home garage in Zaragoza, Spain, under the banner of deWolf Moto Co. This Honda SLR 650 is his fifth project, and it was built using the most basic of toolsets.

“Everything I know is self-taught, mostly through YouTube tutorials and trial and error,” he says. “My bikes were created with a drill, a grinder, files, and a basic set of wrenches, literally. These past two years I’ve bought and learned how to use a TIG welder, and a large format 3D printer, among other stuff.” 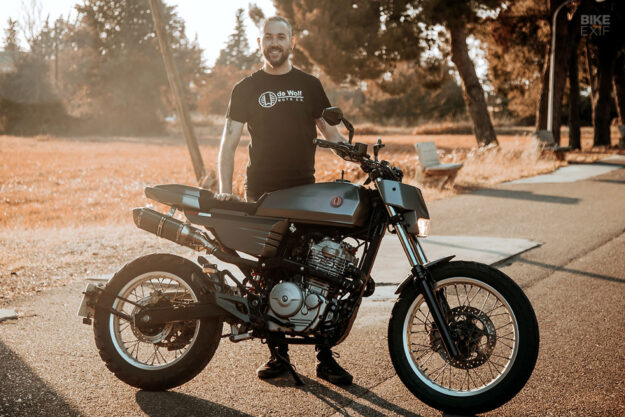 Santi originally got the donor bike, a 1998 Honda SLR 650 (the more street-focused version of the popular Dominator), from his father-in-law, around the same time he discovered the custom scene. “It was in decent condition,” he says, “and it was a great bike to learn on—cheap, reliable, comfortable, nimble and not excessively fast. Just what I needed as a rookie.”

“I rode it for a couple of years, with many trips in between, and really liked how it handled. But as you know the looks are quite awkward, so from the day I bought it I was already thinking about customizing it.” 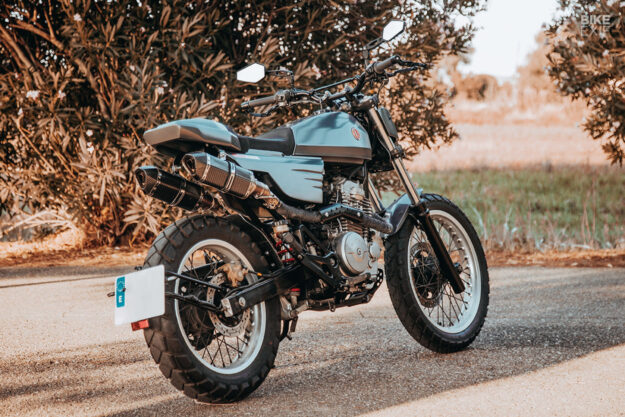 Since this was a personal project, Santi’s goal was to transform the Honda into a modern street tracker—without breaking the bank. So he did just about everything himself, short of specialized jobs like paint and upholstery.

“I wanted something with a street tracker vibe,” he tells us, “but completely out of the box, with as many handcrafted parts as I could. I started with a Procreate sketch on my iPad, and went from there.” 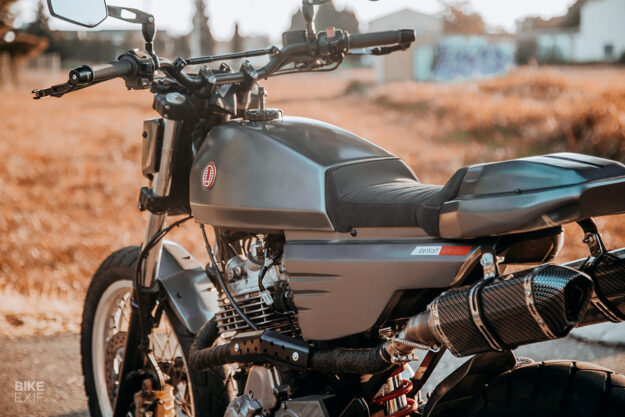 The biggest visual hit comes from the Honda’s new geometric bodywork. But lurking between the custom-made parts is one salvaged piece: the fuel tank from a 1979 Bultaco Metralla GTS 250. Santi modified the lower section to make it fit the Honda, then re-coated the inside.

The headlight nacelle, side covers, tail hump and fenders (yes, at both ends) were hand-shaped out of fiberglass. Santi formed the parts out of foam blocks first, before laying down the fiberglass.

The subframe was shortened and tweaked, and all the body parts were mounted to hand-made steel brackets. Pedro Vilés upholstered the seat in a waterproof suede-like fabric, and the rear cowl can be swapped for a pillion seat. A set of 3D-printed badges adorn the Bultaco tank.

Hidden behind the side covers is a custom steel battery box. Santi rewired the bike too, and treated it to a thorough service—right down to detailing every last nut and bolt. 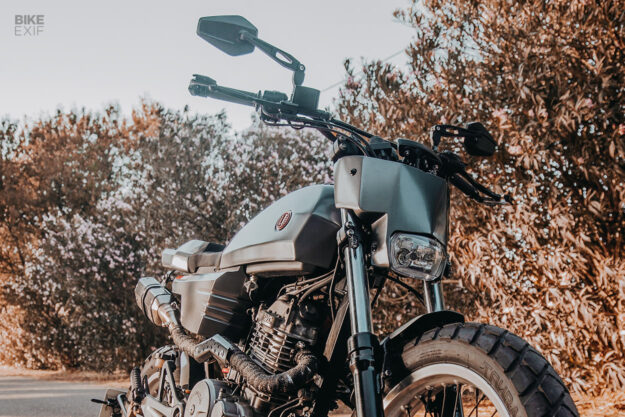 Tucked into the front plate is a halogen light liberated from an aftermarket Polisport enduro part. Just behind it is a Koso digital speedo and a set of Renthal bars, fitted with new mirrors and lever guards. A set of Micro Cube LED turn signals are mounted just off the lower yoke.

Out back is a custom license plate bracket, fitted with a pair of multi-purpose Highsider LEDs. Santi wanted to keep the SLR street legal, so there’s an LED license plate light too—but the whole arrangement is easy to remove for off-road shenanigans. 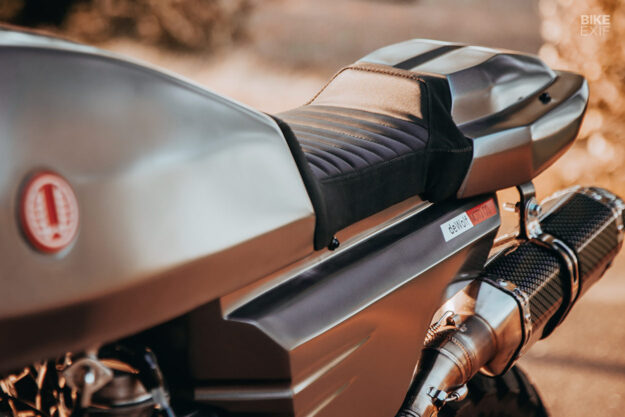 Other upgrades include braided brake hoses from HEL, Mezeler Tourance tires and a DNA high-flow air filter. Santi kept the stock suspension, but rebuilt it at both ends to run stiffer. Finishing things off is a pair of aftermarket carbon mufflers, mounted to custom stainless steel headers.

A warm grey livery accentuates the Honda’s modified lines, laid down by Alberto Malpica. Santi finished the rest of the bike off with a mix of powder-coated and polished parts. 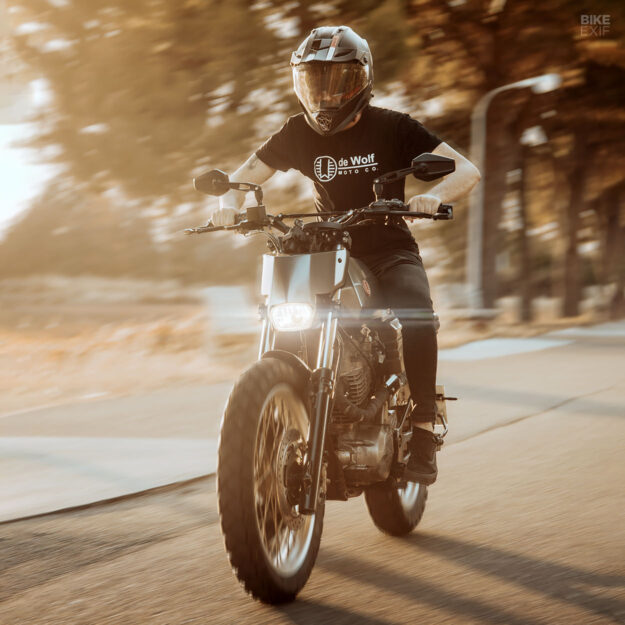 Since Santi only works on his bikes after hours, it took him a full five years to finish the SLR 650. And now that it’s all buttoned up, it’s for sale to fund the next project—proving just how addicted he is to custom motorcycles. 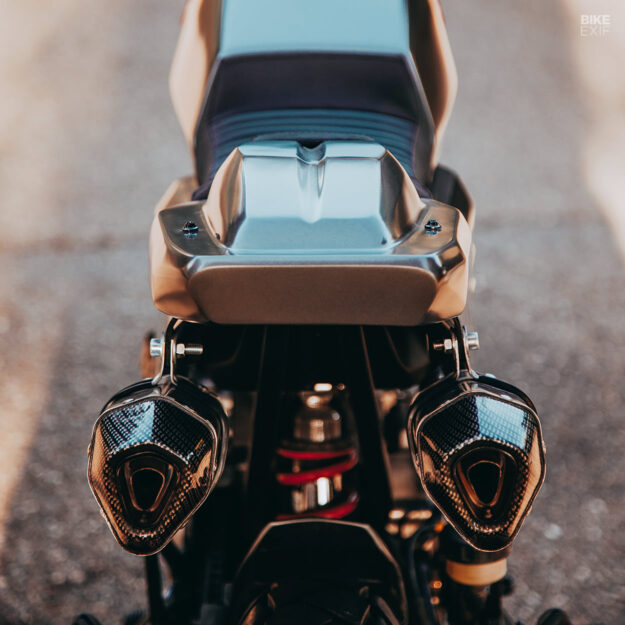