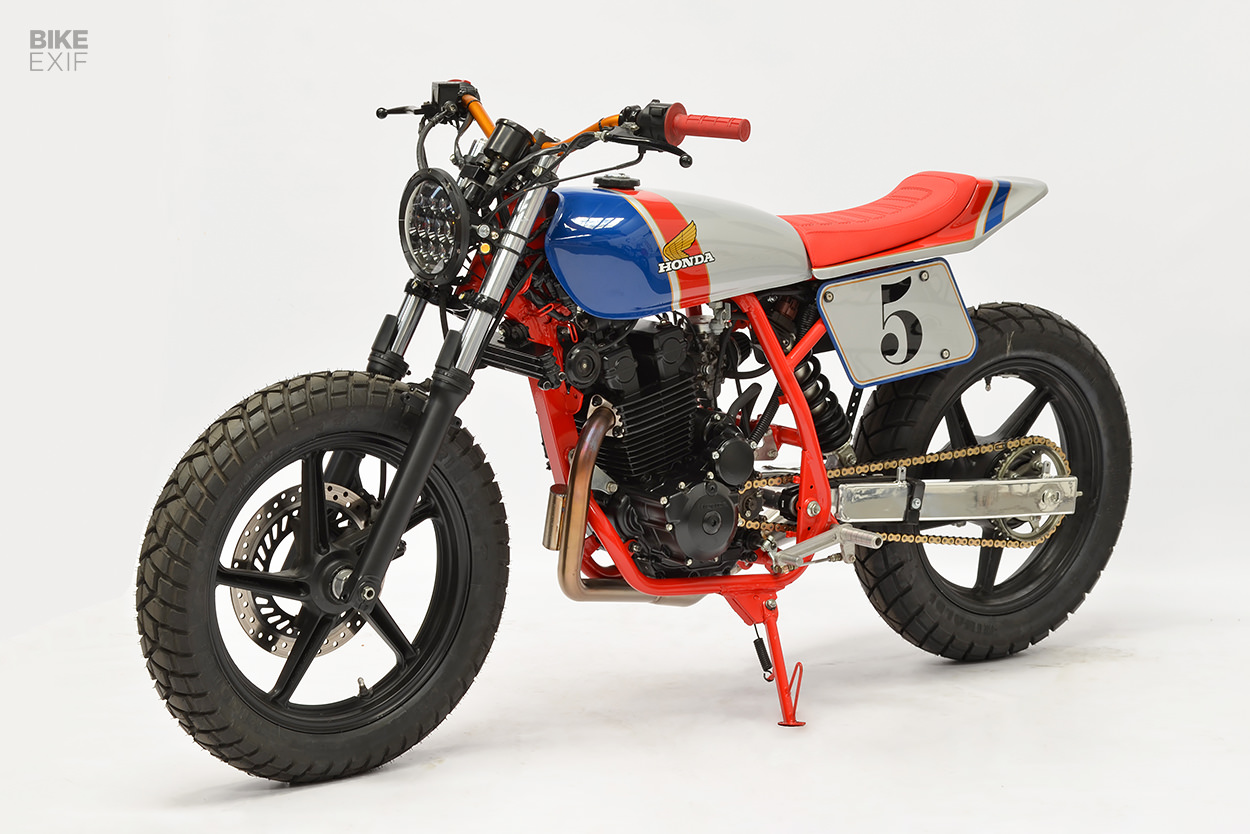 If you’re looking for an easygoing and dependable commuter, the Honda CBX250 Twister is a solid option. Known as the CBF250 in Europe, you might think it’s an odd choice for a street tracker wrapped in HRC colors. But not according to Juan Taurel at Low Budget Customs.

The shop with the most approachable name in the biz is based in Palermo, a suburb of Buenos Aires, Argentina. It’s mostly a solo gig, but Juan often pulls in an extra pair of hands for a few days at a time. 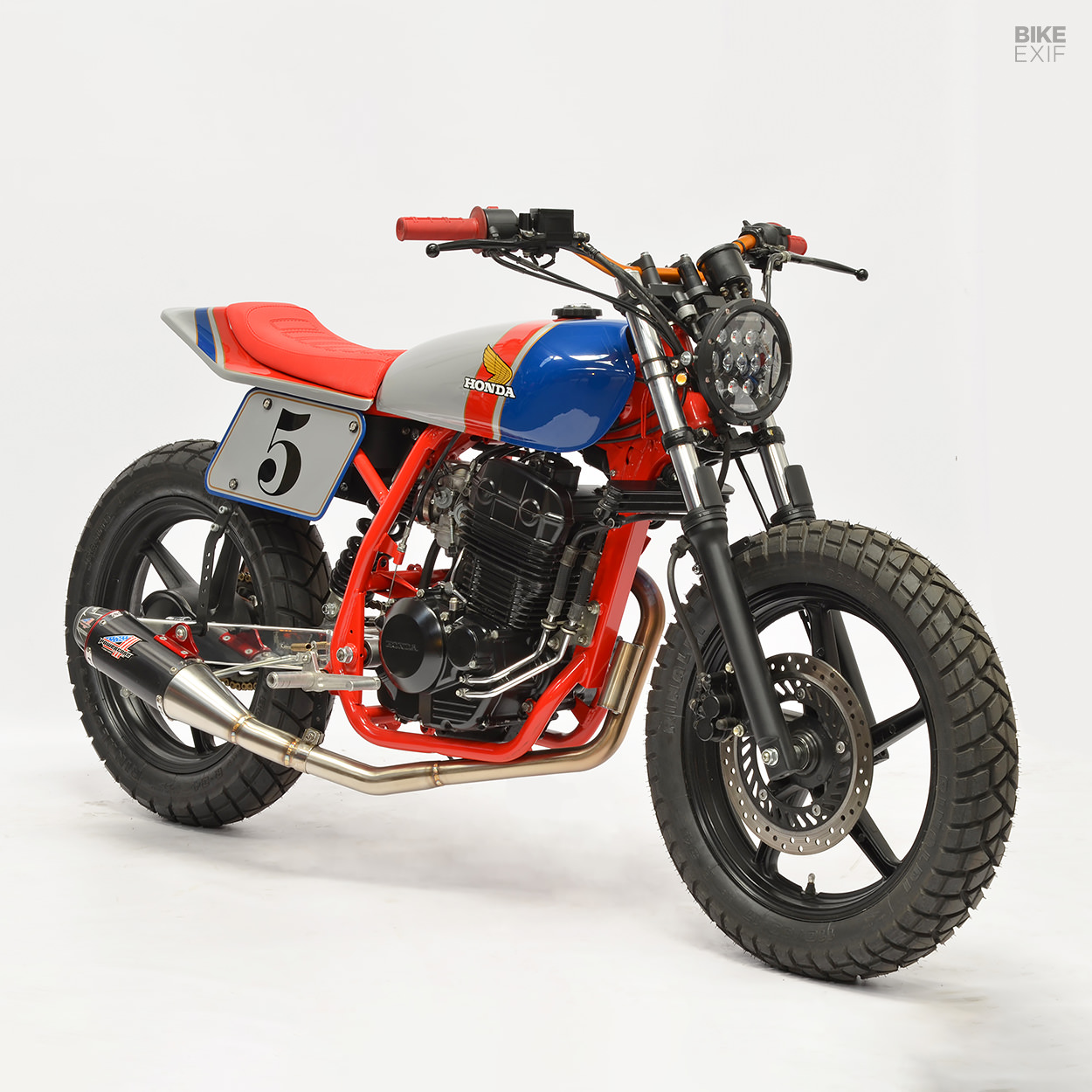 Low Budget Customs has dabbled in bigger bikes, but the smaller machines are Juan’s forte. This 2013-model Twister was built for a client with an LBC creation already in his garage; he wanted another, and requested a simple street tracker design. But then Juan suggested injecting some HRC dirt racing style.

“The bike was built for daily use on the streets, with a race bike look,” he explains. 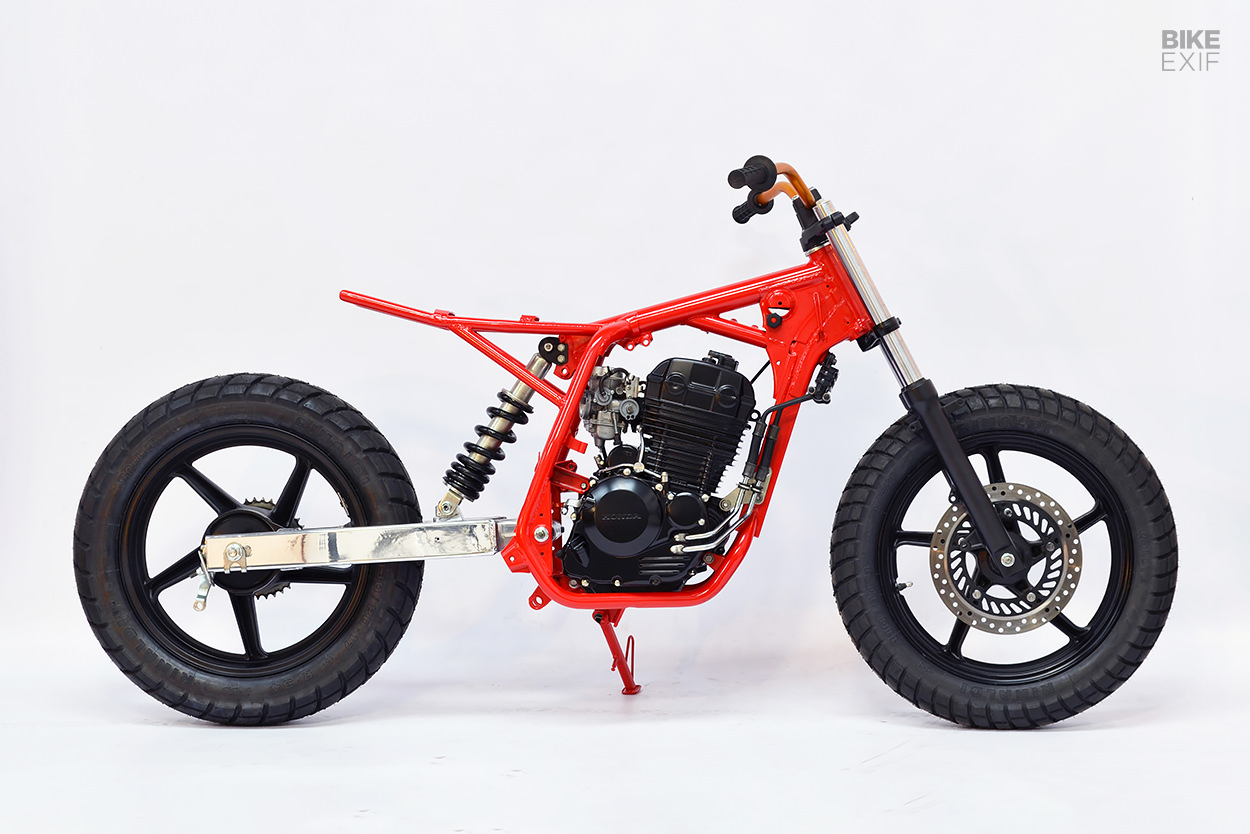 It takes a hefty dose of imagination to see the lines of a street tracker under the CBX250’s skin. To get there, Juan had to massage the Honda’s rolling chassis—radically tweaking its stance in the process.

He lowered the front forks a touch, then fabricated a new anchor point for the rear shock, to adjust its angle. The rear of the frame was lopped off, and a new, shorter subframe built in its place. Since the bike’s destined for street use, Juan kept the stock 17” wheels, and wrapped them in dual-purpose tires from Rinaldi. 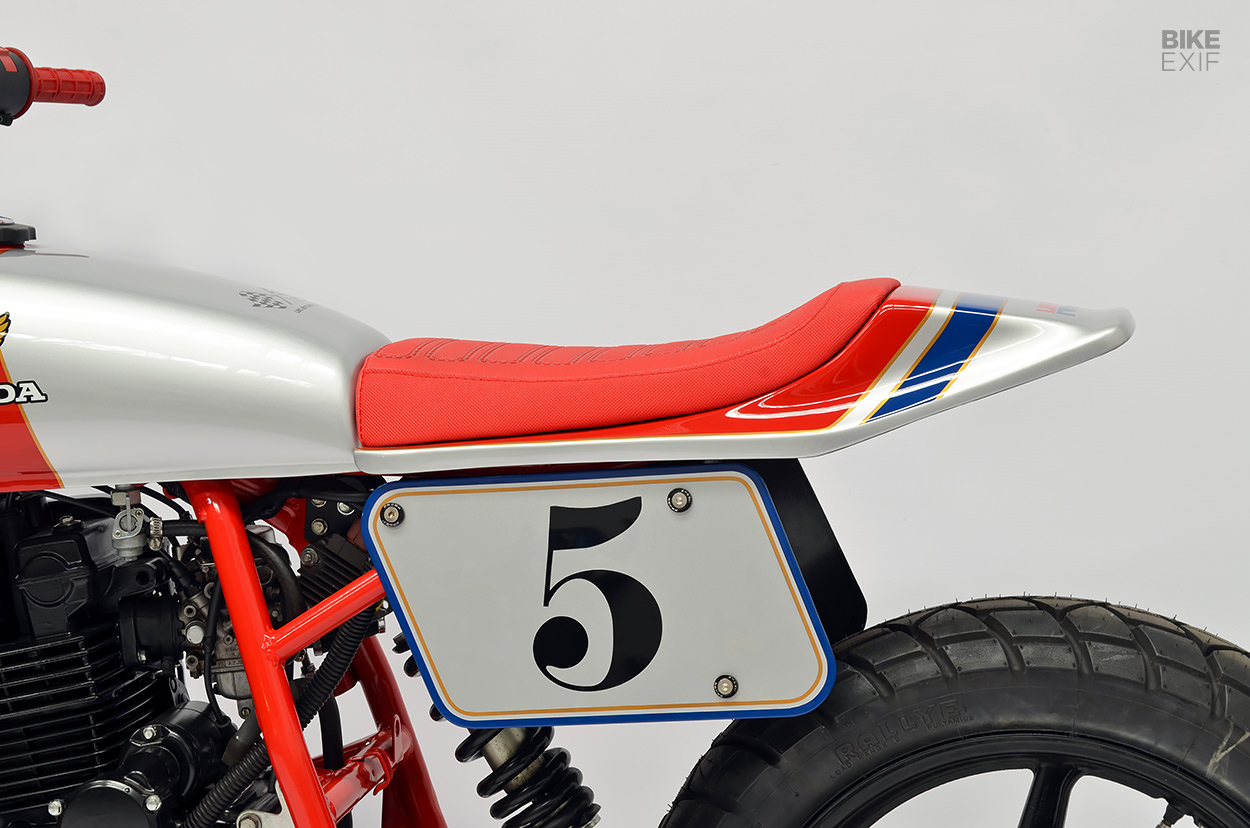 Sitting up top is a fiberglass flat track tail unit—designed and manufactured in-house, and finished off with a special MX-style gripper fabric on the seat. The arrangement’s flanked by a pair of hand-made aluminum number boards that hide a custom electronics tray.

Further forward is the fuel tank from a 1980s 125 cc Honda, modified to fit the CBX frame. The tank and seat combo match up perfectly, and go a long way to making the Twister almost unrecognizable. 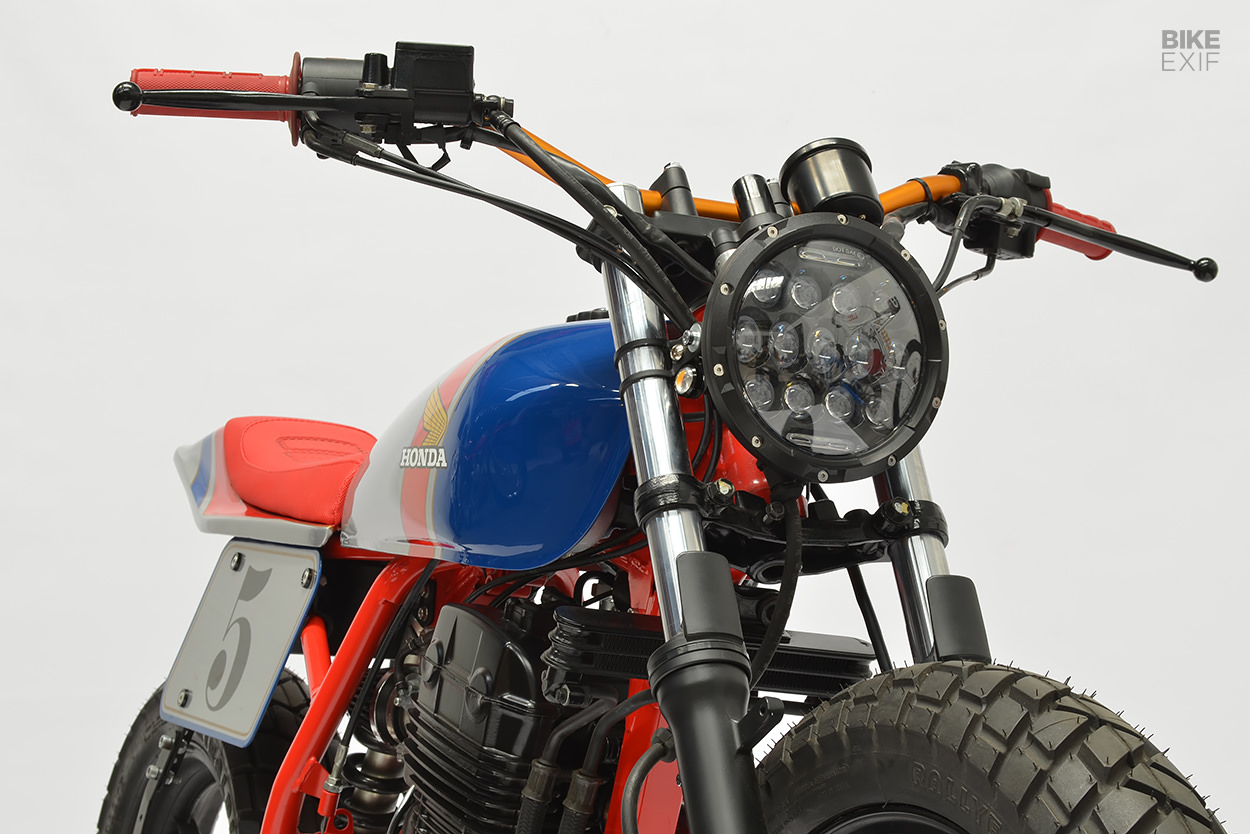 Juan swapped out all the lighting too, ticking all the boxes to keep the bike street legal. There’s a new LED headlight up front, a slim LED taillight tucked under the tail section, and tiny LED turn signals. (There’s a removable license plate bracket, too.)

The cockpit’s been treated to a new set of anodized handlebars, fresh grips, and a simple analog speedo. The aluminum foot controls are custom items. 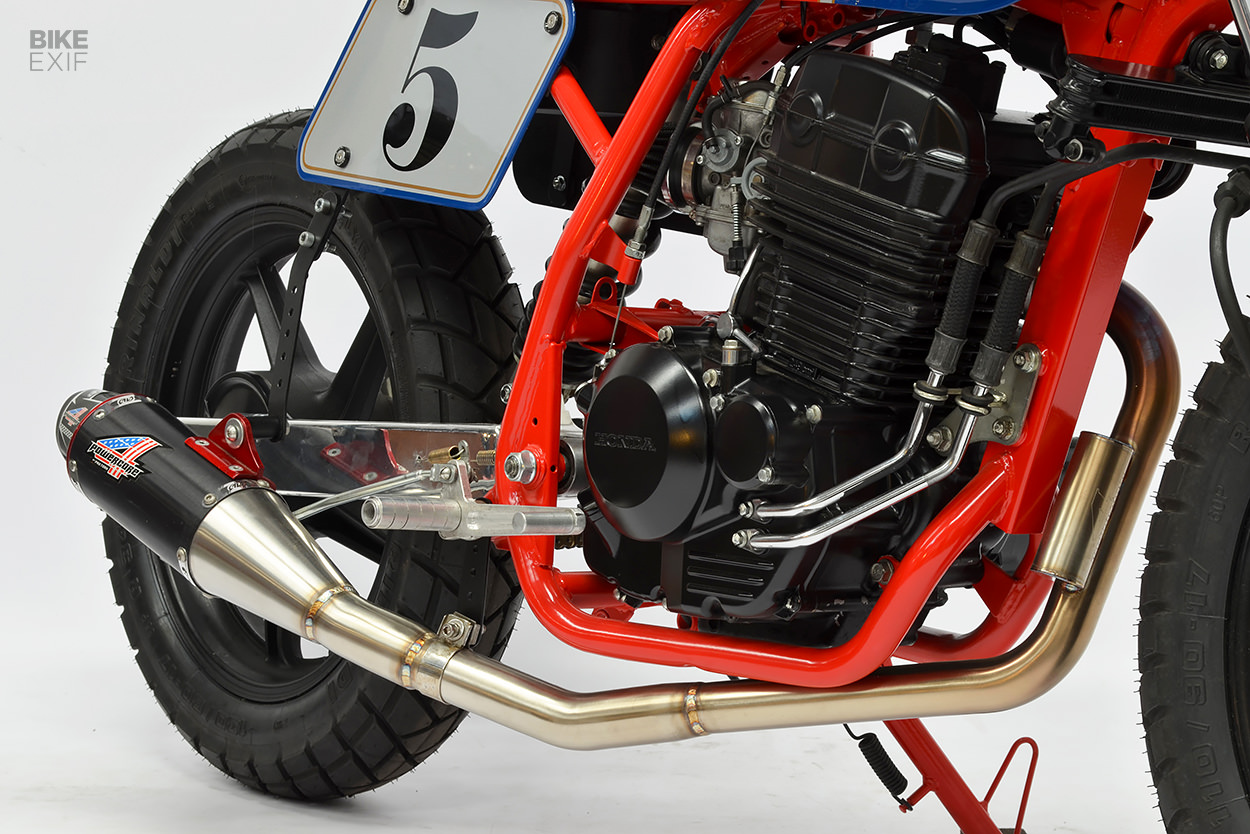 LBC didn’t mess with the motor, but they did install a pod filter, and a new stainless steel Powercore 4 exhaust system from Pro Tork. It wasn’t just fit-and-forget though—the carb was tuned to optimize the output of the 250 single.

No points for guessing what the reference for the Twister’s new livery was. It proudly wears a vintage red and blue HRC scheme, trading white for silver. Alejandro Minissale shot the paint job, while Rodrigo Banchero helped elsewhere on the project. 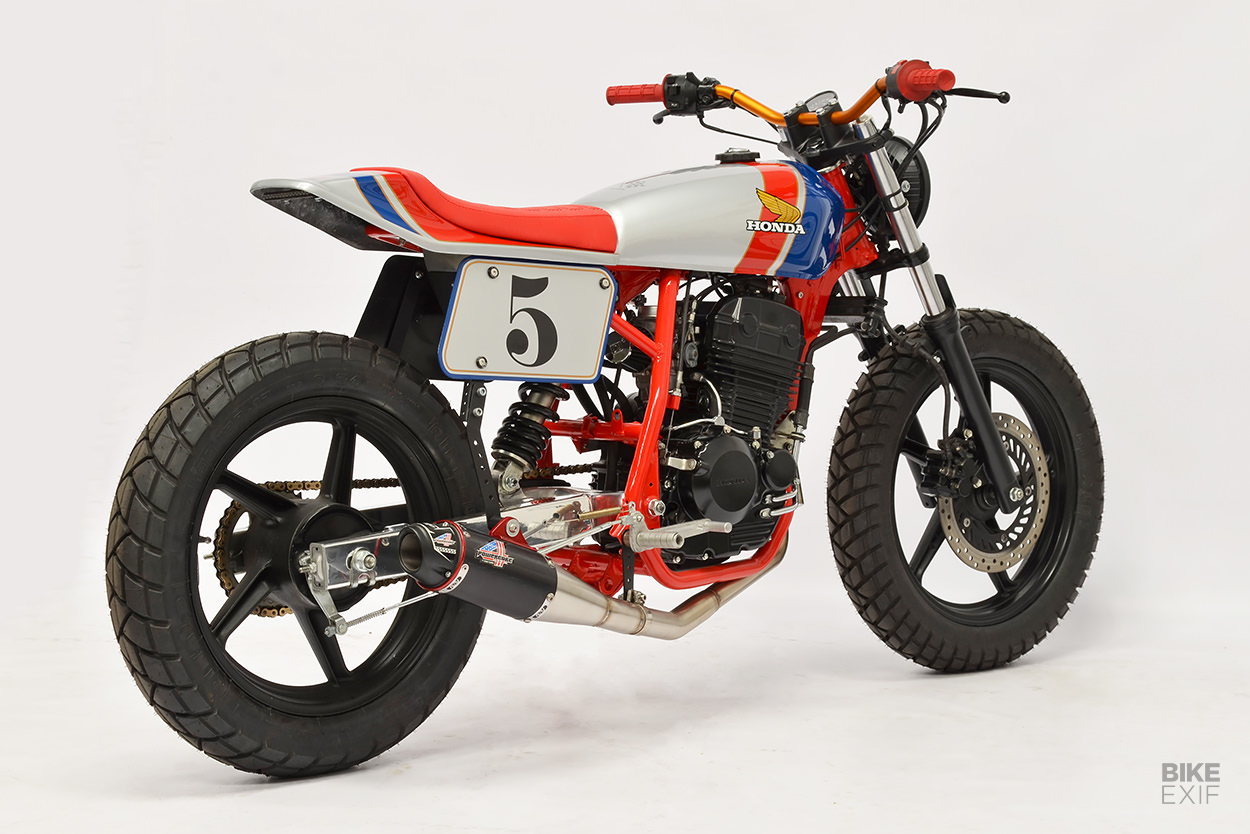 LBC also cleaned up and repainted the motor, finished the frame in red, and added an extra hit of gold by way of a new DID chain.

Cheeky, charming, and reportedly now 22 kilos [about 49 lbs] lighter than before, LBC’s Twister is a master class in single-cylinder street trackers. And it has us asking the perennial question: shouldn’t Honda be making something like this? 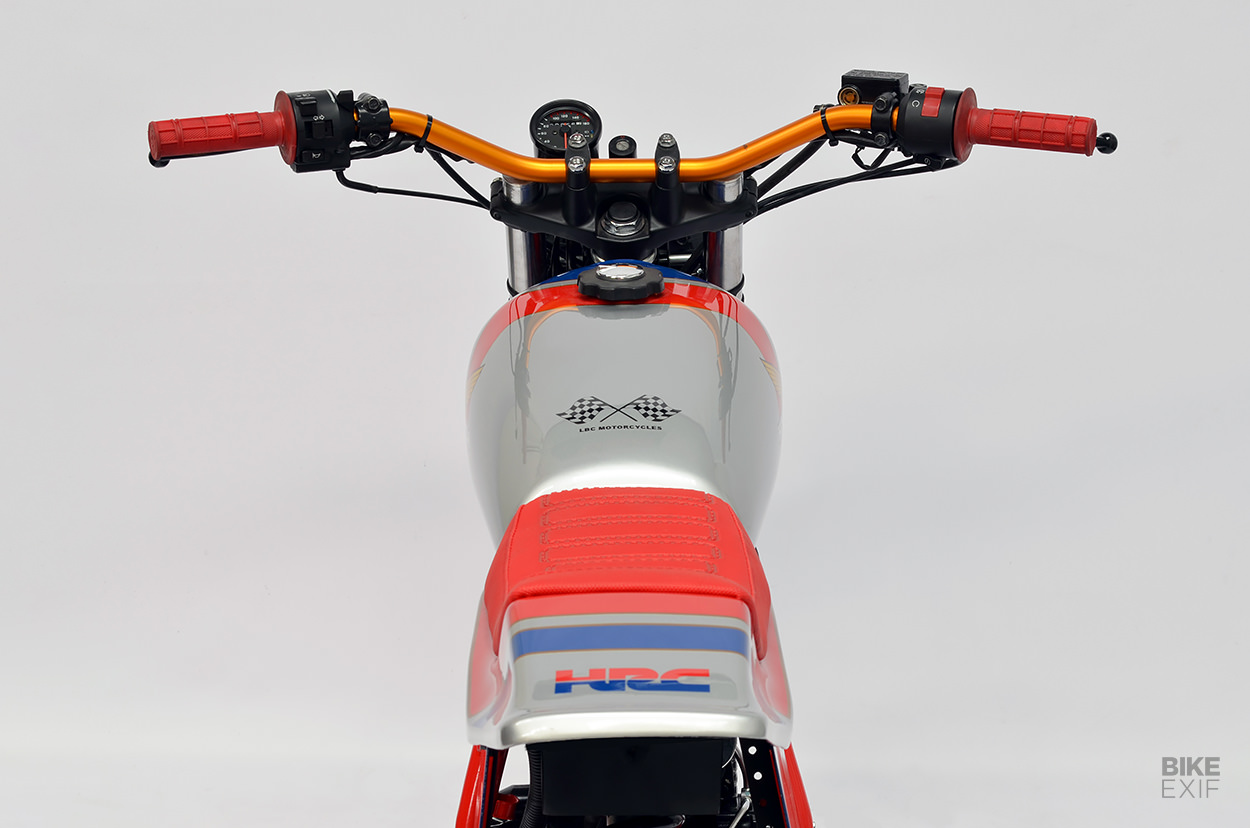