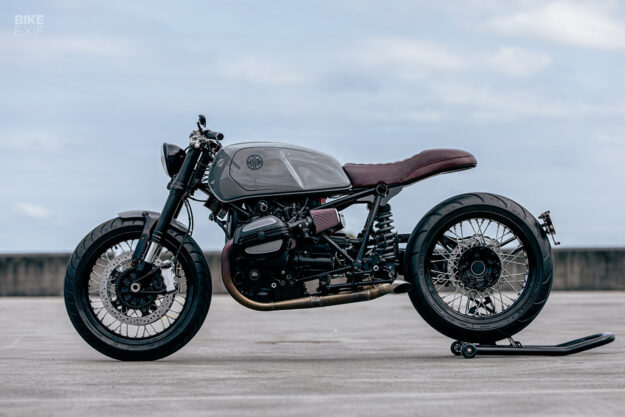 Dieter Rams said that good design “involves as little design as possible.” Colin Chapman said “simplify, then add lightness.” Both principles are at work in this ultra-crisp BMW R nineT café racer, brought to you by Deus Ex Machina Australia.

It’s certainly not the first café racer that Deus’ head wrench, Jeremy Tagand, has built. But the brief—to turn a stock 2014-model R nineT into a trimmed-down custom with classic style and modern tech—felt like a fresh challenge. The job called for a radical reworking of the BMW’s silhouette, plus a smattering of upgraded parts. 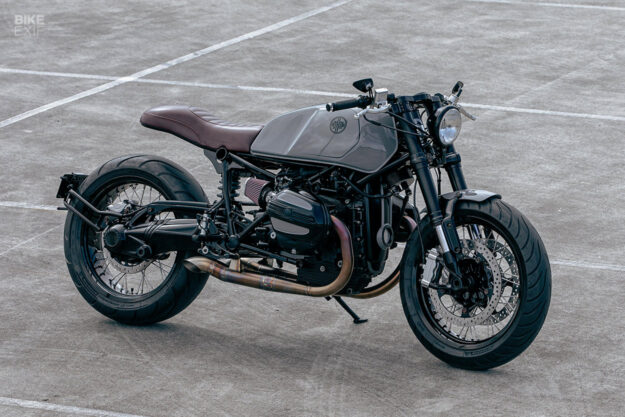 A tank swap was on the cards—but that’s no mean feat with the BMW R nineT. It’s a modern motorcycle with a fuel pump and a number of electronic components in play, plus the OEM tank fits its trellis frame like a glove. Jeremy had to find a donor that would nail the look, while striking a visual balance with the nineT’s wide boxer motor.

In the end, Jeremy chose a 1980s Suzuki GS1100 reservoir for its muscular, angled style. Deus handed it over to fabricator Jonathan Okada at Kansai Giant Design Factory, to modify it accordingly. Jonathan massaged it to sit lower on the BMW frame, and made space for the stock fuel pump, ABS module and ECU. 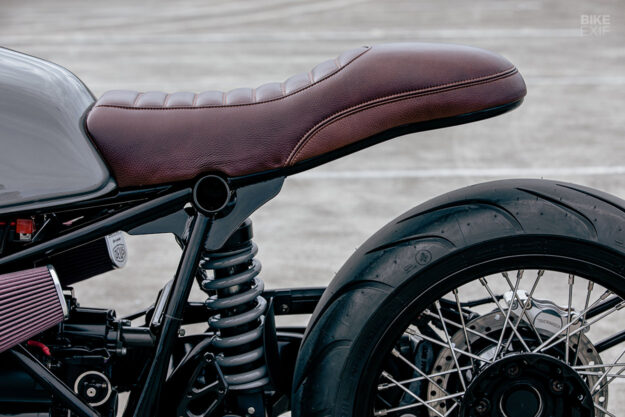 Next up, Deus fabricated a new subframe to create a clean line from the bottom of the tank through to the seat. Terminating in line with the rear axle, it’s neatly integrated with a custom seat pan that also hides the nineT’s remaining electronic bits. Dave at Bad Arse Trim Co. handled the tidy upholstery on the generously padded seat.

To keep the tail end clean, Deus relocated the license plate to a swingarm-mounted bracket from Wünderlich. A pair of Kellermann LEDs act as turn signals and taillights. 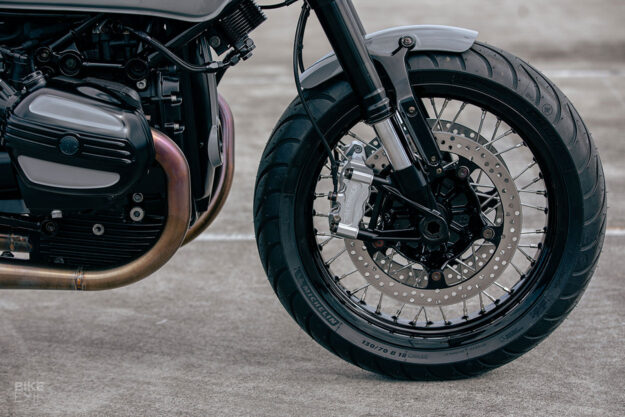 Moving to the nineT’s running gear, Deus disassembled the stock suspension, anodized the parts, and sent everything to Shock Treatment for a service. The 17” rims were swapped out for a set of 18” hoops, laced to the stock hubs by Ash’s Spoked Wheelz. A full Beringer brake set was installed for extra stopping power. 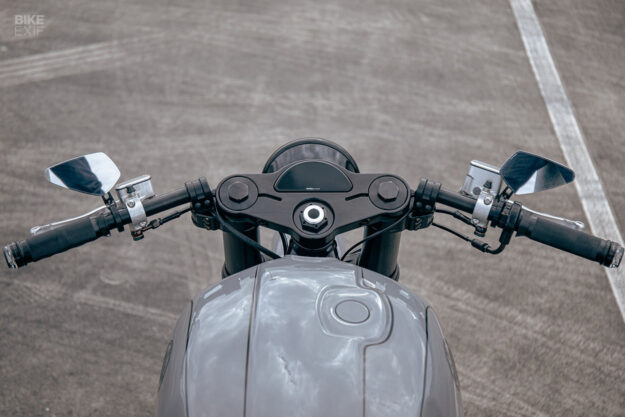 Jeremy’s relentless pursuit of minimalism is most evident from the rider’s point of view. The BMW’s new cockpit is as purist as it gets, built around a CNC-machined top clamp from Ricci Engineering that also houses a digital Motogadget speedo. Adjustable ABM clip-ons wear the Beringer controls, a KTM RC8 throttle, and Motogadget mirrors and bar-end turn signals.

If you’re looking for the switchgear, you’ll have to hunker down to find it. Integrated into the bottom of the CNC-machined grip on the clutch side, is a set of small push buttons from Grip Ace. The bike’s key ignition now lives just below the fuel tank on the left hand side. 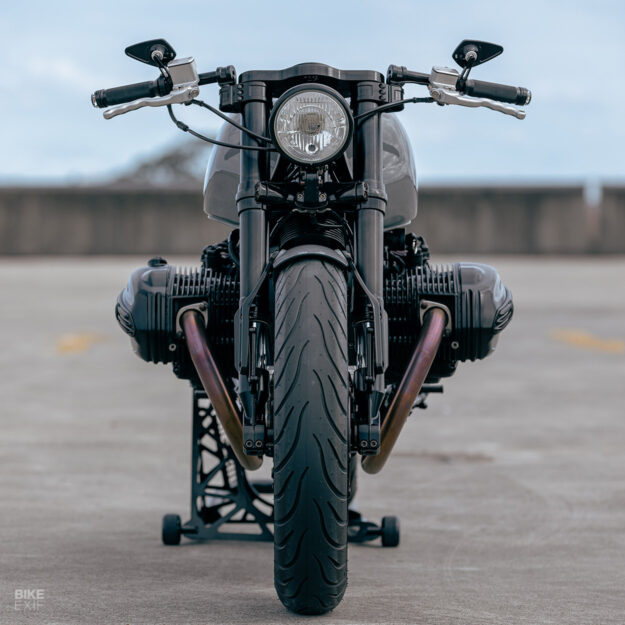 Other changes include a classic 5.75” Bates-style headlight and a gorgeous flush-mounted gas cap. Deus also installed Sato Racing rear-sets, and a small Honda oil cooler, tucked up behind the bottom yoke on a custom-made bracket. It’s hooked up via custom-braided oil lines.

The engine’s dressed up with valve covers from Roland Sands Design, and a front belt cover from Rizoma. Both were modified with sand cast Deus badges. 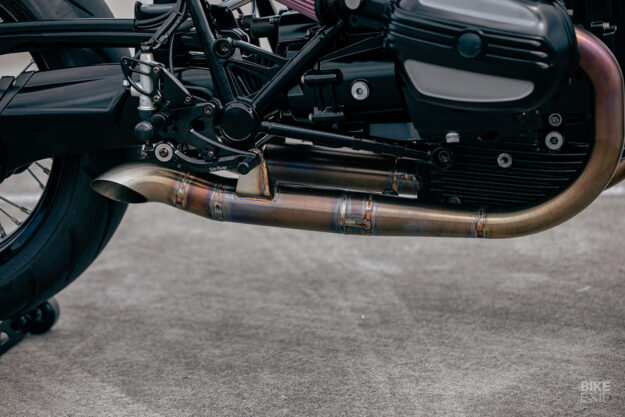 With 109 hp on tap in stock form, the BMW R nineT’s boxer motor has more than enough grunt for most riders. So Deus left it alone on the inside, choosing to fettle the intake and exhaust instead.

The air box was swapped out for a stage three filter kit from DNA, then RB Racing tuned the bike via a Dynojet Power Commander unit. The twin drag pipes are full custom items, and even include hidden baffles to keep the neighbors happy. 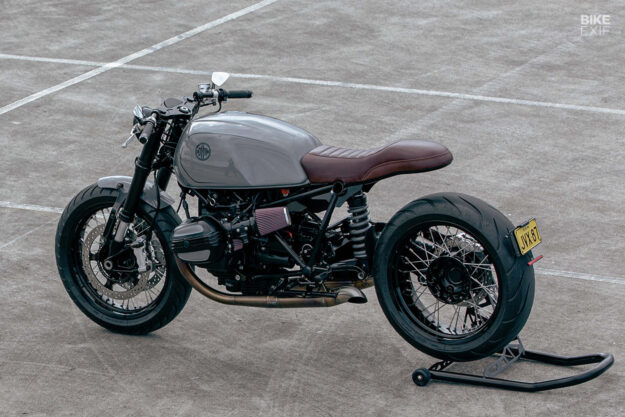 Finally, Deus dressed the distilled boxer’s tank and front fender in a coat of Nardo Grey paint. Subtle pinstripes, powder coated parts and color-matched panels on the new engine covers tie everything together. With some subtle discoloration already coming through on the exhaust headers, the overall vibe is as stylish as it gets. 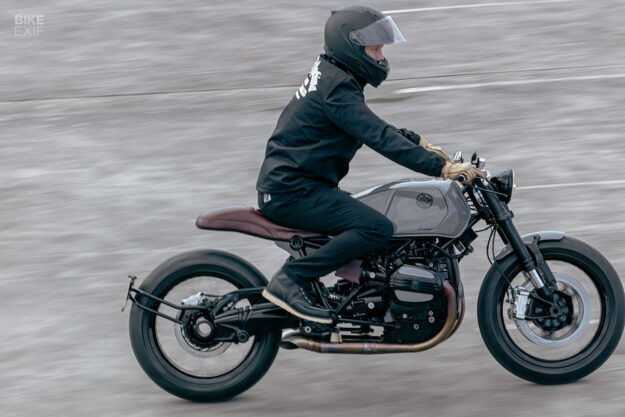 In a sea of BMW café racers, this one stands out for its raw simplicity. Deus describes it as “a wink to the past, a nod to the present and a helmet full of smiles per hour.” 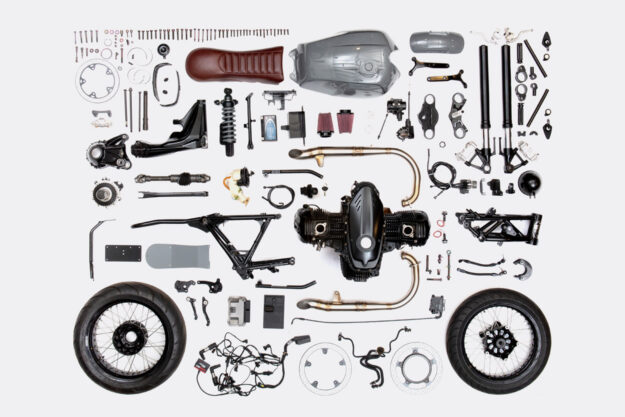