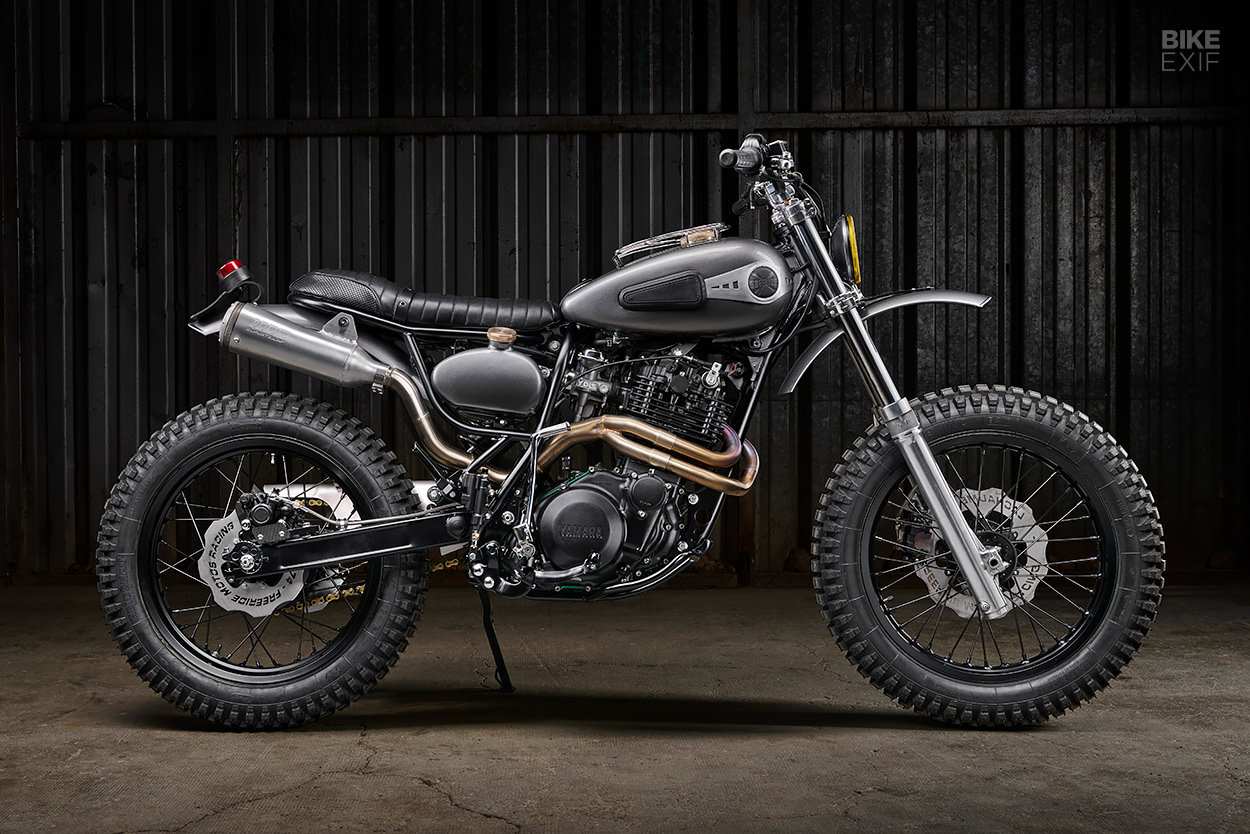 The sheer diversity of Freeride Motos Racing’s stable makes it difficult to lump them into one silo. You’re just as likely to find a svelte supermoto in their workshop, as you are a 90-year-old Moto Guzzi. Shop boss Pierre Dhers is clearly onto a good thing—so it’s no wonder that he gets return customers.

One such customer is Dakar Rally driver and flat track racer Pierre Lachaume. The two Pierres met some time ago when M. Lachaume wanted a custom bike. He wanted his 1989 Yamaha XT 600 modified at first, but, after some deliberation, Freeride built him a stunning KTM flat tracker instead. 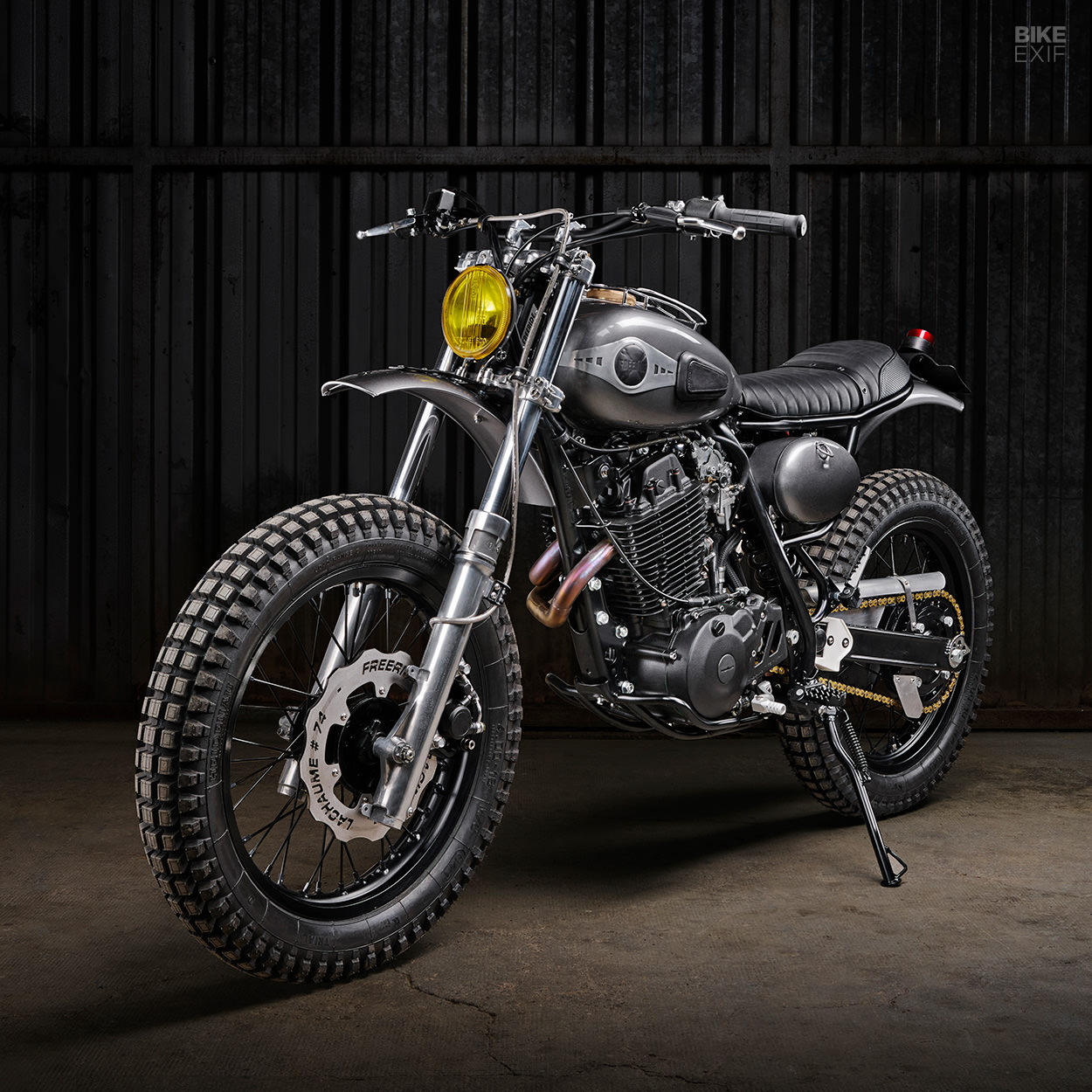 Patience is a virtue that he clearly possesses. Once the KTM was done, he headed back to Freeride’s workshop to get the XT 600 sorted too.

“After having completed other projects together, the subject of the XT came back on the table,” explains Pierre Dhers. “We wanted a simple and refined scrambler, a perfect way to get to the corner bar for a drink.” 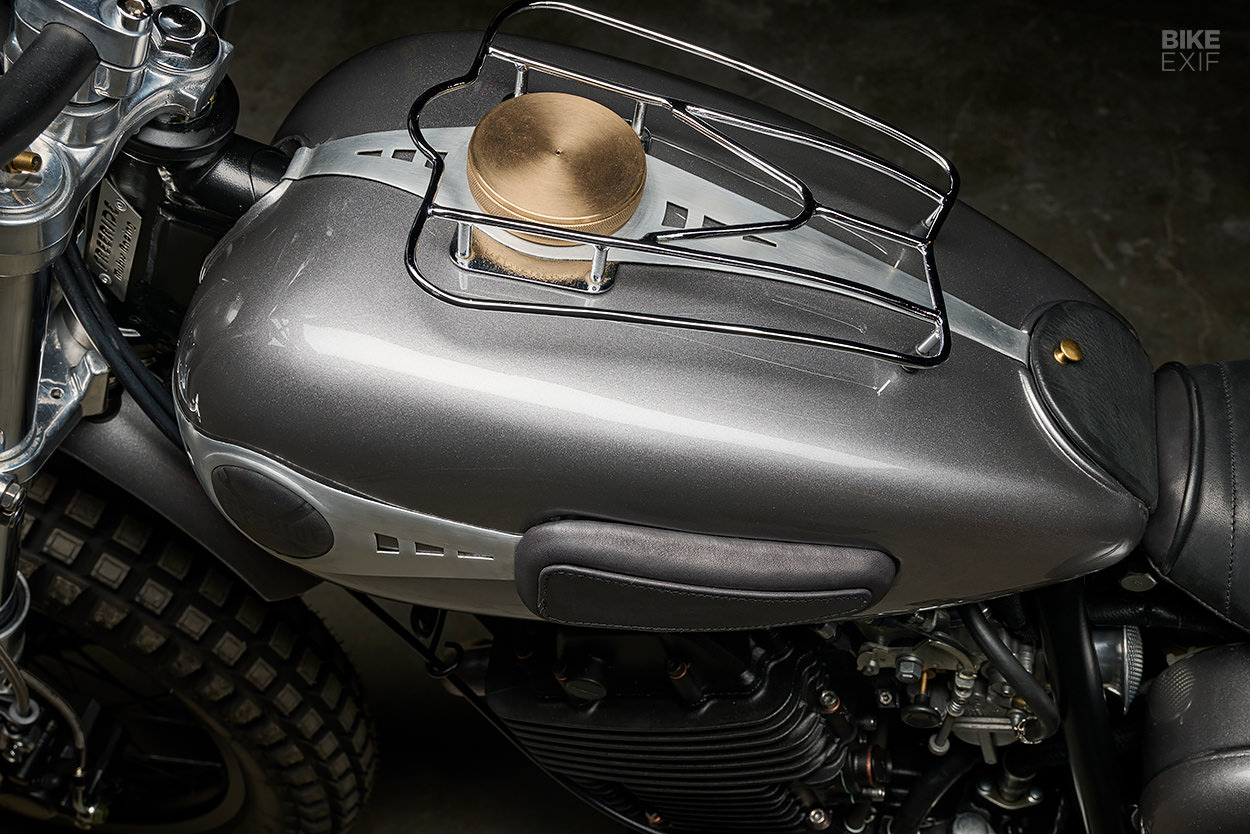 If you were unaware, the French once had a booming national motorcycle trade, which pumped out some beautiful machinery (give it a Google). Freeride took inspiration from post-war French motorcycles, by fitting the fuel tank from a 1950s Monet Goyon. The oil tank and toolbox were lifted from a 125 cc Terrot.

The brass fuel and oil tank caps were hand-turned by Pierre’s father. who regularly contributes to Freeride projects. The brushed aluminum accents on the tank and the small luggage rack are period parts that were restored for the project. 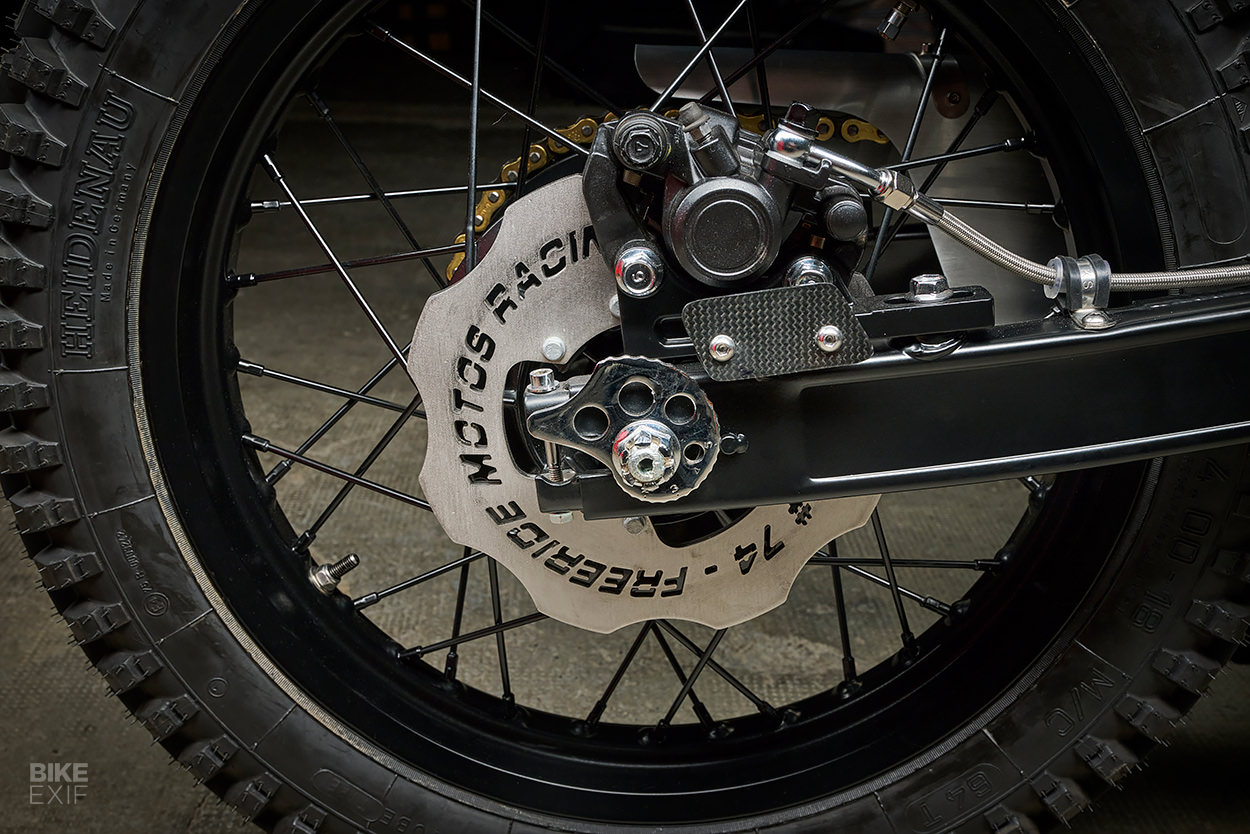 The Yamaha’s stock wheels were refreshed, and re-spoked with a new 18” rim up front. This matches the rear rim—which is something you should expect from a flat track aficionado like Lachaume. Looking very modern in new black paint, the rims are shod with Heidenau vintage-style enduro tires.

The almost-40-year-old braking system was upgraded by way of new master cylinders and solid-mounted discs. The discs have been expertly laser cut with the Freeride name, and ‘Lachaume 74’ in reference to Pierre’s racing number. 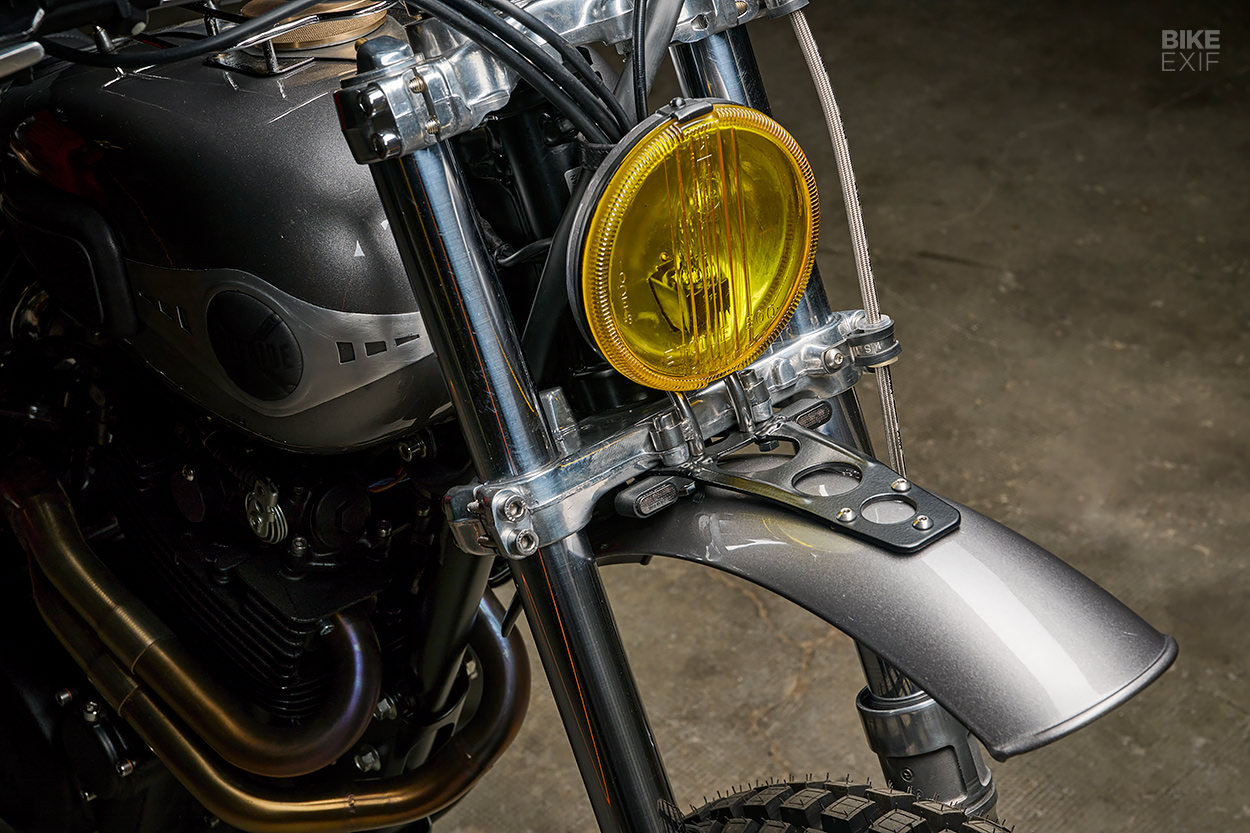 Another nod to the France of yesteryear is the selective yellow headlight. It was donated by a car from the 1980s, where it was originally a fog light. The stock indicators were shelved and replaced with discrete LED units, hidden between the forks up front, and under the seat out back.

The seat was trimmed by Mr Cannac Christophe of Akotabe in Carmaux, in the south of France. It’s perched atop a custom subframe. 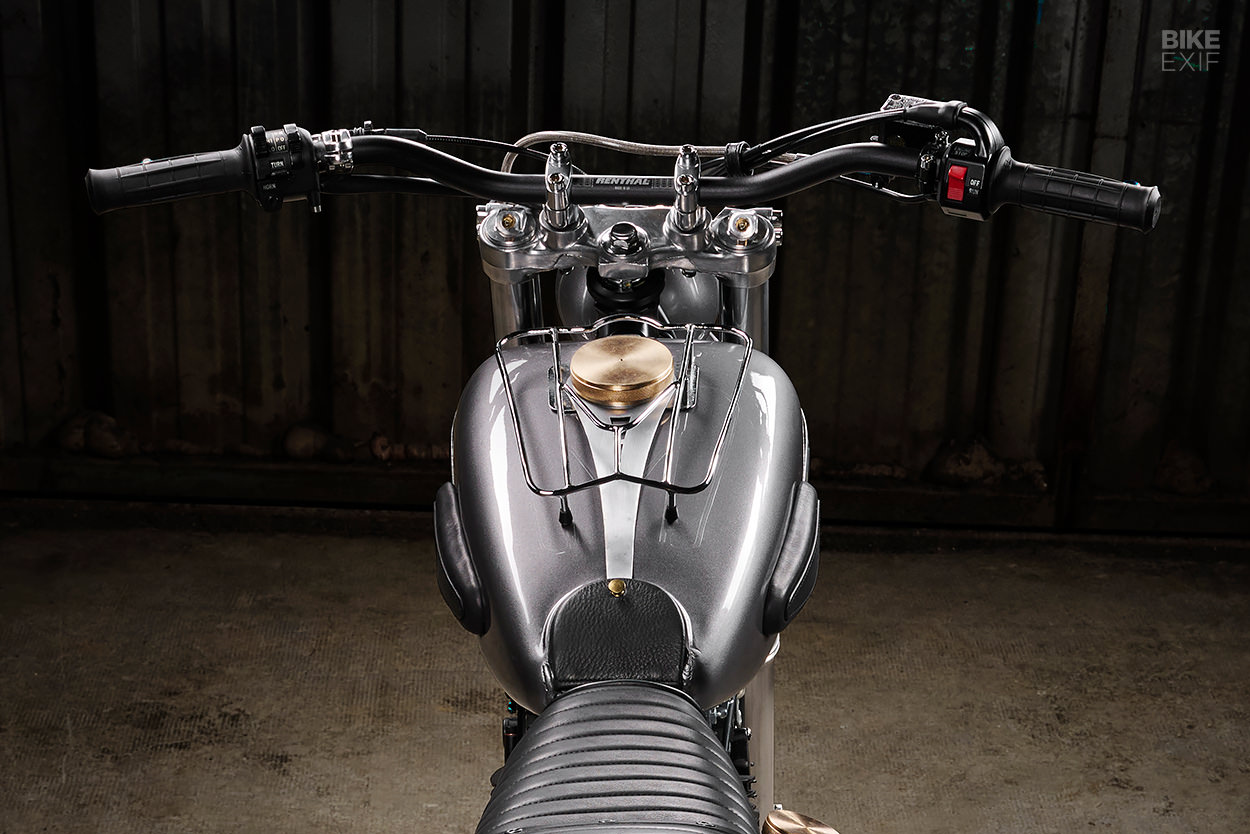 The rider cockpit now consists of new switchgear, throttle assembly and black Renthal bars held in place by polished risers. The front and rear suspension have been lowered, likely to inject just a few extra cc’s of flat-track style.

Freeride also treated the engine to a full tear-down, adding performance improvements by way of a new Prox conrod, Vertex valves and a Vertex piston. The carbs were stripped, bathed and refreshed, and now breathe through aluminum filters from Malossi. Reassembled with fresh gaskets all round, the engine was painted black to match the frame and should be good for another 30+ years of service. 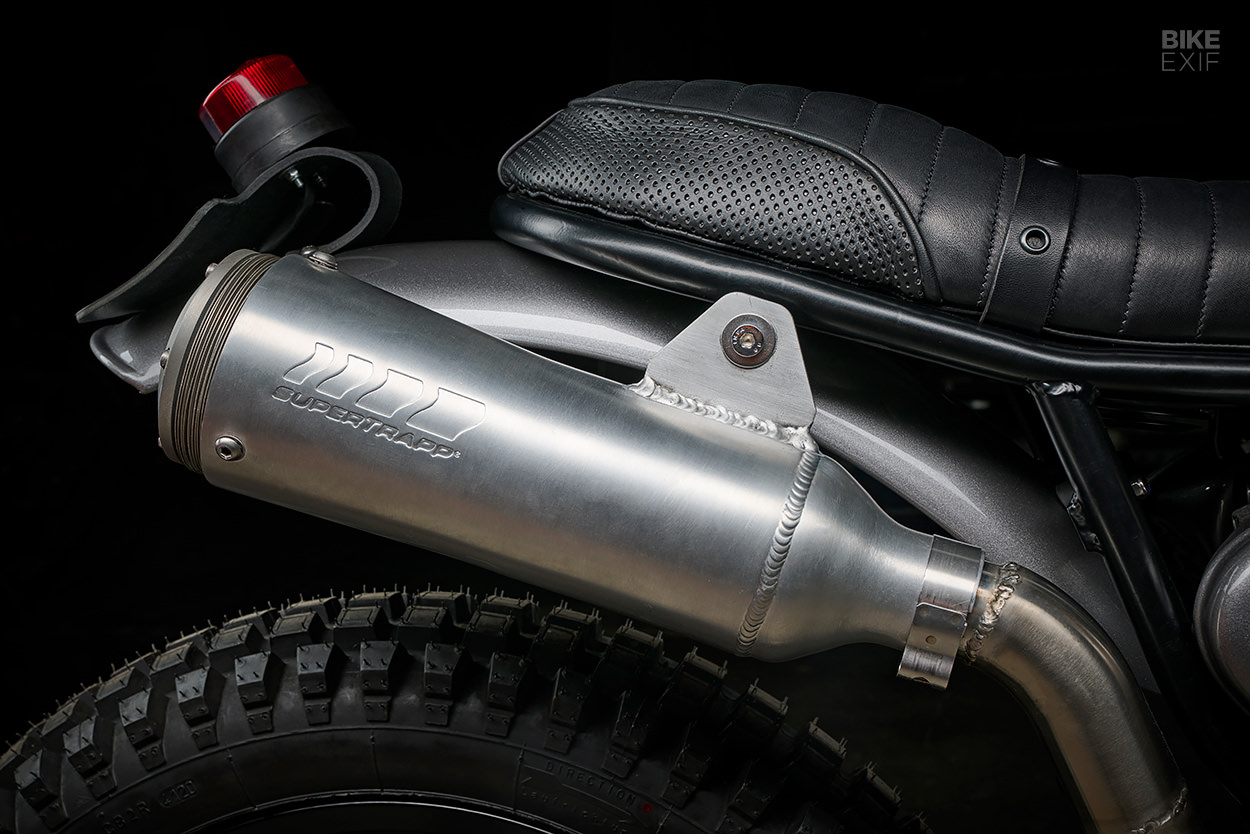 The stainless steel exhaust system is hand-made, terminating in a Supertrapp muffler. It might just be our favorite part of the build; the purple to golden-bronze color really pops against the otherwise monochrome design.

Gone are the original plastic guards of the 1980s—they’ve been replaced by short steel guards, painted to match the tanks. There are leather accents all over the bike, including a taillight and plate ‘bracket’ that harks back to the trials bikes of old. It might not look structurally sound, but it does look damn cool. 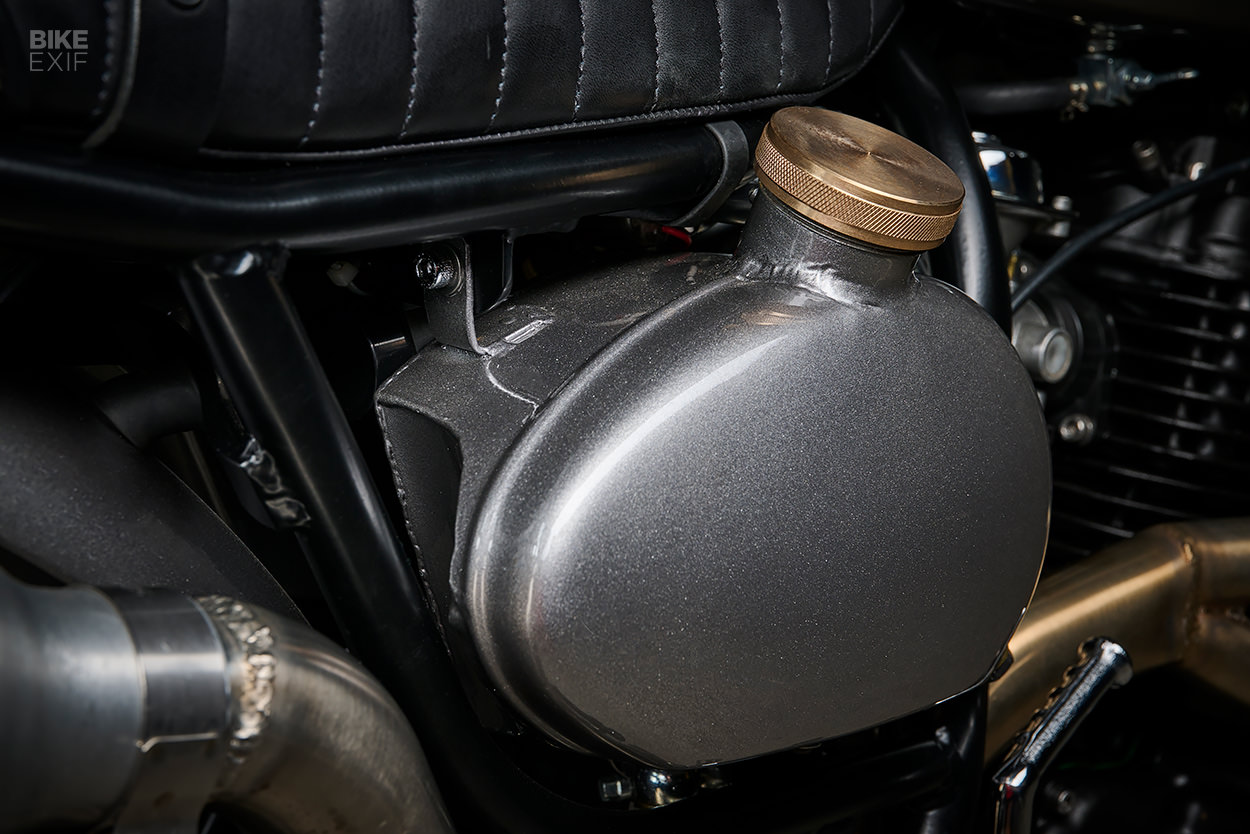 Freeride set out to create a minimalist scrambler for bopping around town, and have absolutely nailed it. This XT 600 might be from France, but it’s the physical embodiment of dolce far niente.

Picture the scene: you’re in the south of France and treat yourself to a lie-in, wake up with a strong coffee and cruise around town on your scrambler. After meeting your friends for a drink in the afternoon, you take a scenic detour through the woods on the way home. Bliss. 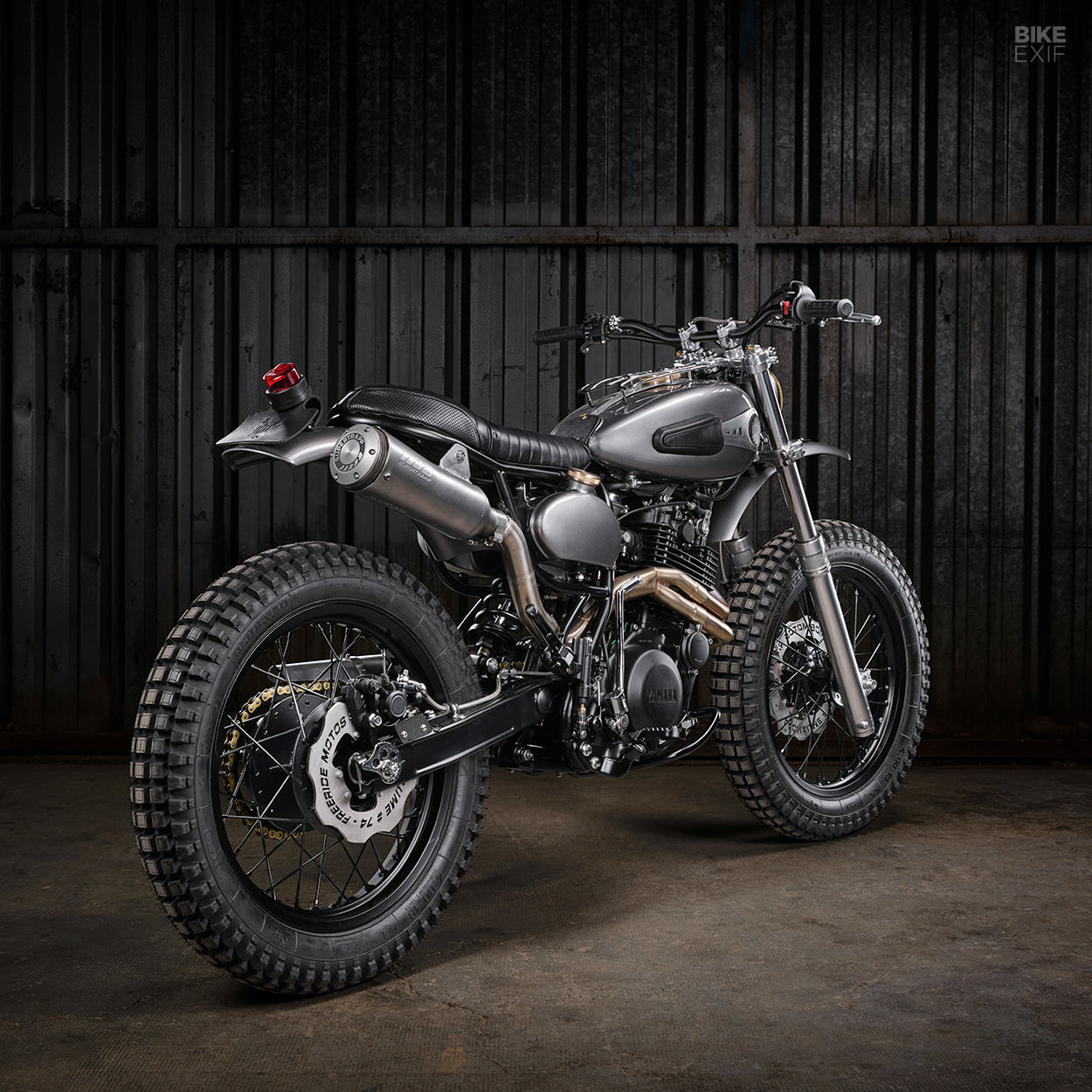