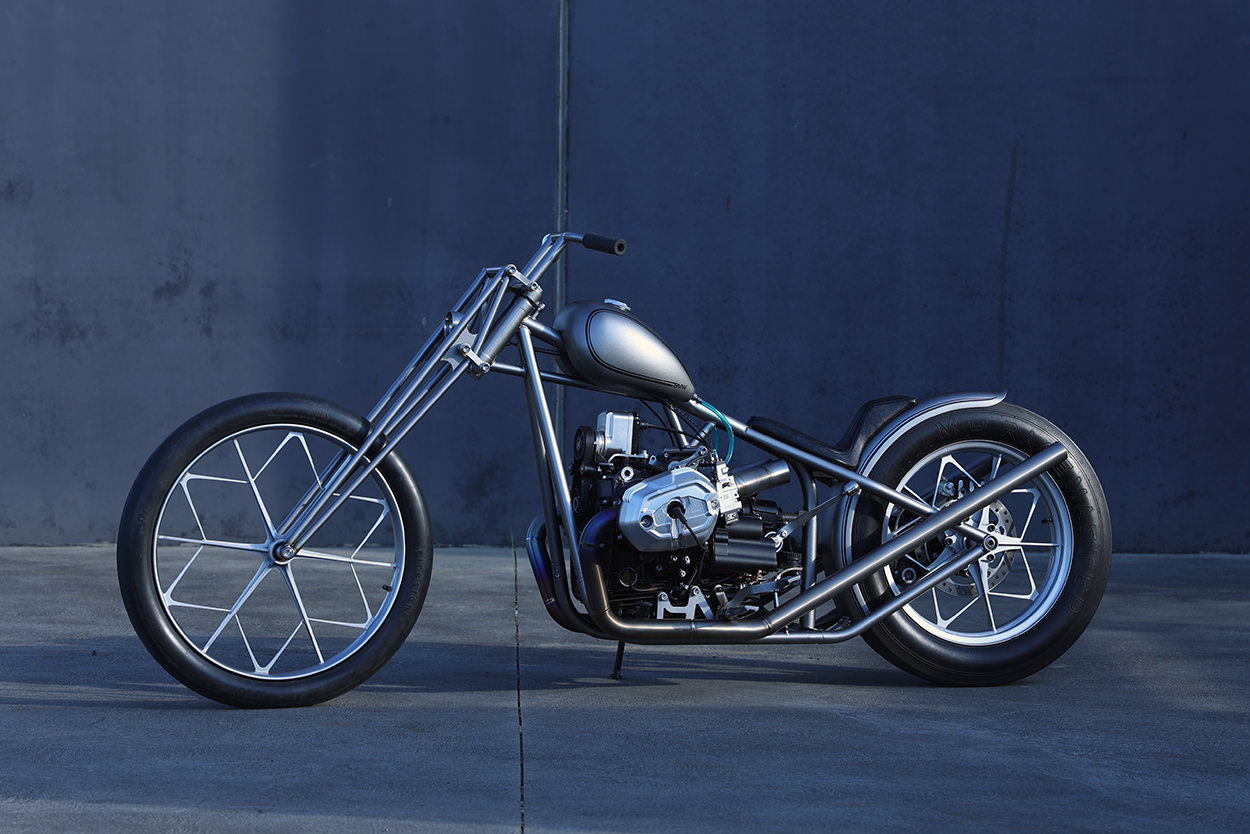 Nigel Petrie is a bike builder who deserves way more attention than he gets. Despite his next-level fabrication skills and Born Free show invites, he tends to fly under the radar outside his native Australia. Which is a shame, because he doesn’t only build kickass bikes—he also builds incredible cars too, such as the Toyota Hilux ‘Drift Ute.’

Motorcycles have fascinated Nigel since his childhood days, growing up on the outskirts of a tiny rural town, some 200 kilometers away from Melbourne. Being outside mainstream life maybe explains why there’s nothing conventional about his builds. 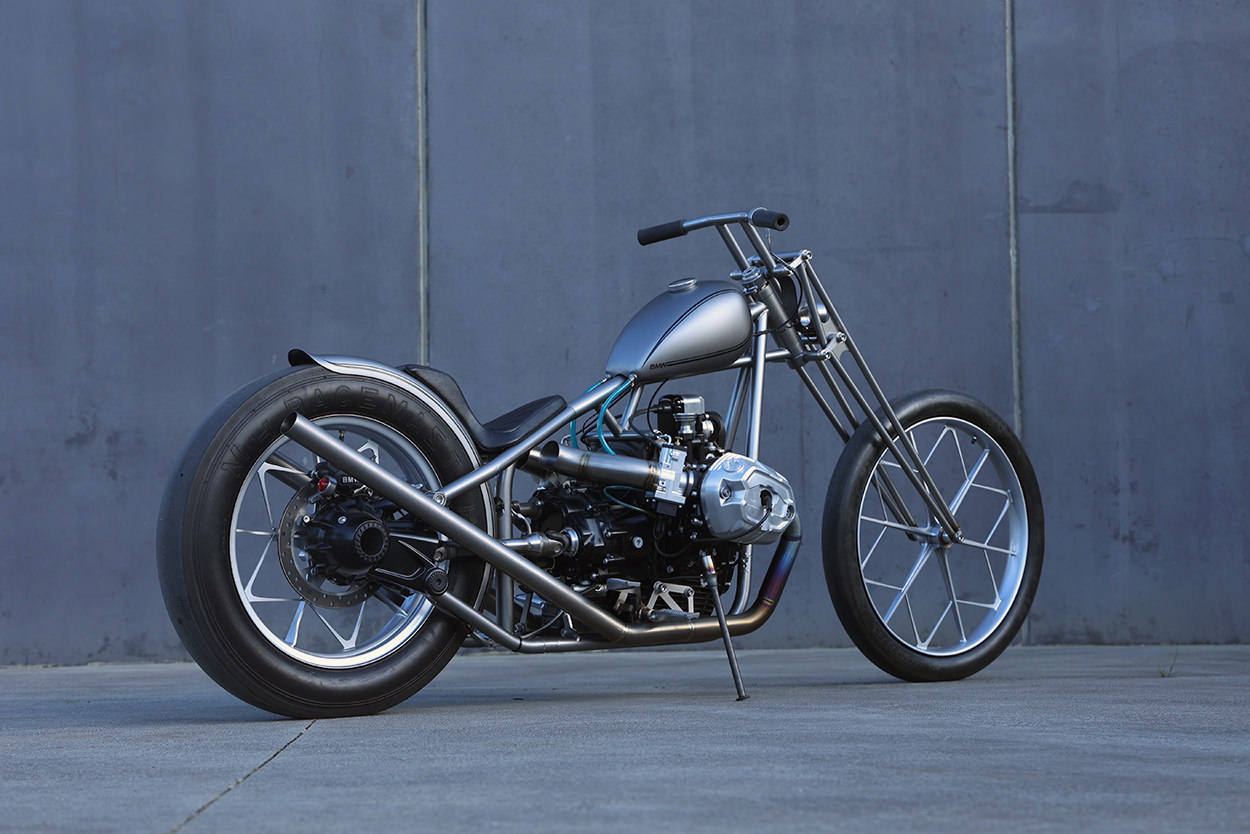 Nigel has already turned a KTM 350 SX-F into a salt flat racer, and he’s now turned a BMW R nineT into a slim, elegant chopper with a 21st century vibe.

A boxer-powered BMW is not the first platform one usually thinks of when building a chopper. And Nigel already has a vintage Harley in his garage. So how did this strange business start? 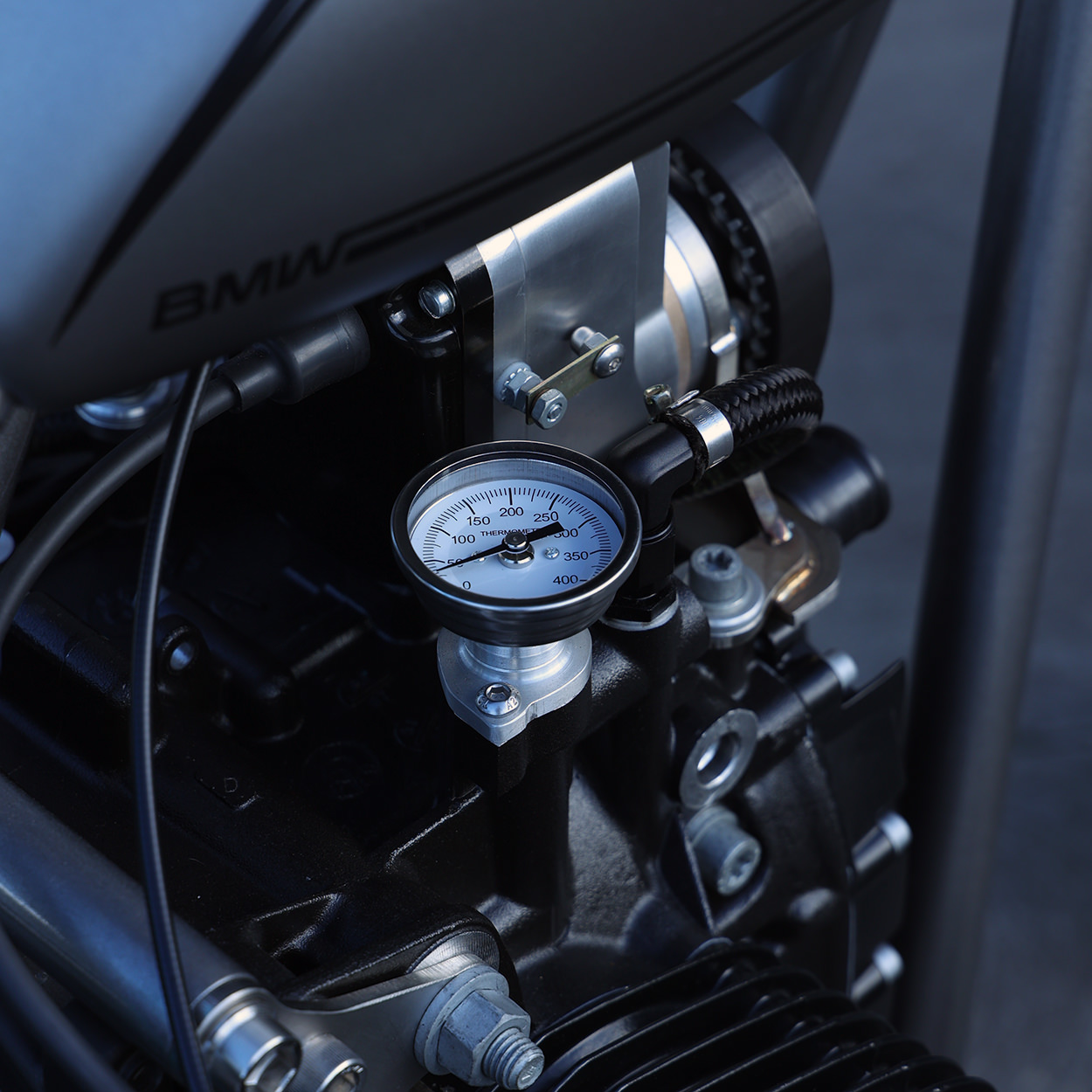 BMW Motorrad kicked things off in 2019 with a delivery to Nigel’s Engineered To Slide workshop, on the Deakin University campus in Geelong.

“I picked up a brand new R nineT Racer,” Nigel tells us. “I unboxed it and tore it down—but only kept the engine, rear drive unit and rear brake. I was riding an R nineT Scrambler at the time and loved the way it rode. I also loved skinny choppers, and was always wondering if the two could ever be combined in a tasteful manner.” 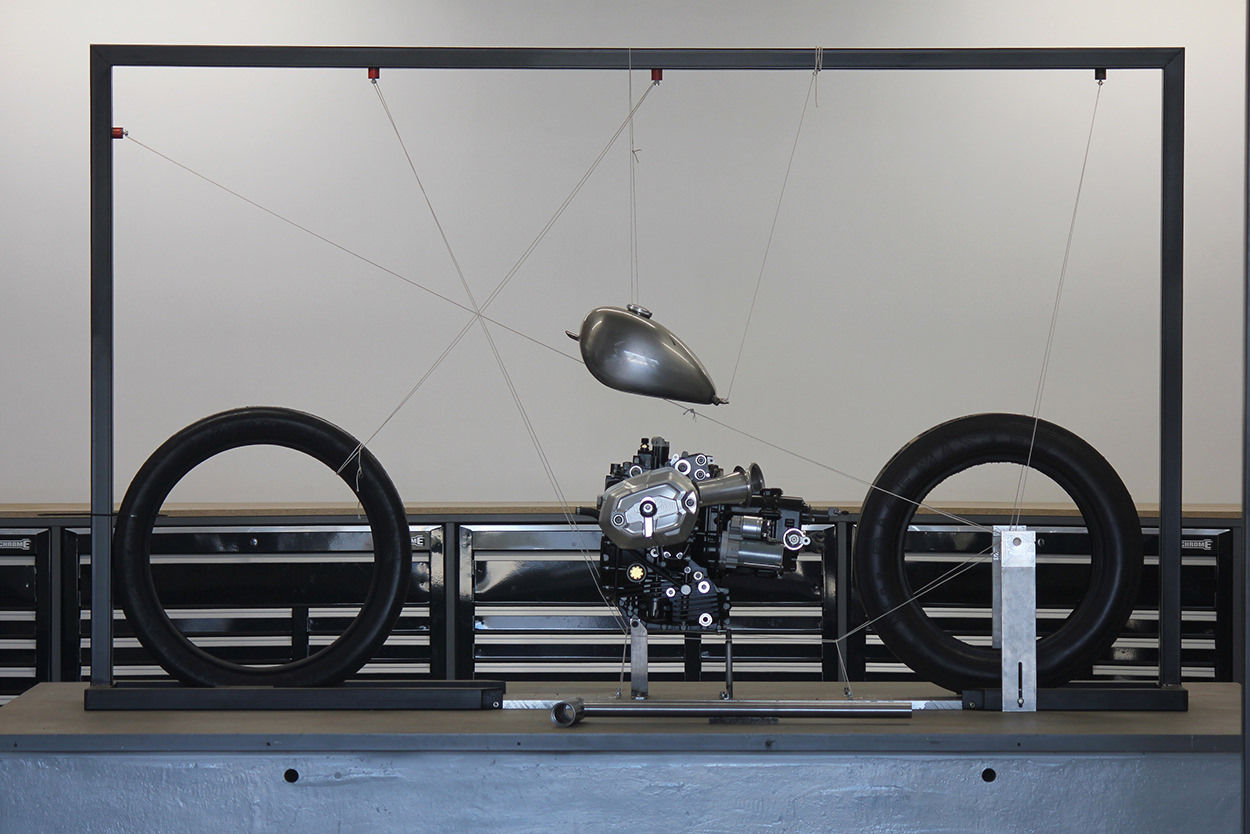 “It was all a bit of a guessing game,” Nigel admits. “Anything can work if you set your mind to it, so I trusted in my fabrication craft and eye for detail. It was just a question of whether I had the patience or not.”

The skeletal girder-style fork attracts the eye first. “This was always on the plan, as I love the triangulation and simplicity,” says Nigel. “I used 19mm diameter Chromoly tube to construct the fork, but the ‘spring’ is made from carbon fiber—using five layers of ‘prepreg’ shaped over a 3D-printed mold, baked in an oven under vacuum. It’s super strong and works incredibly well.” 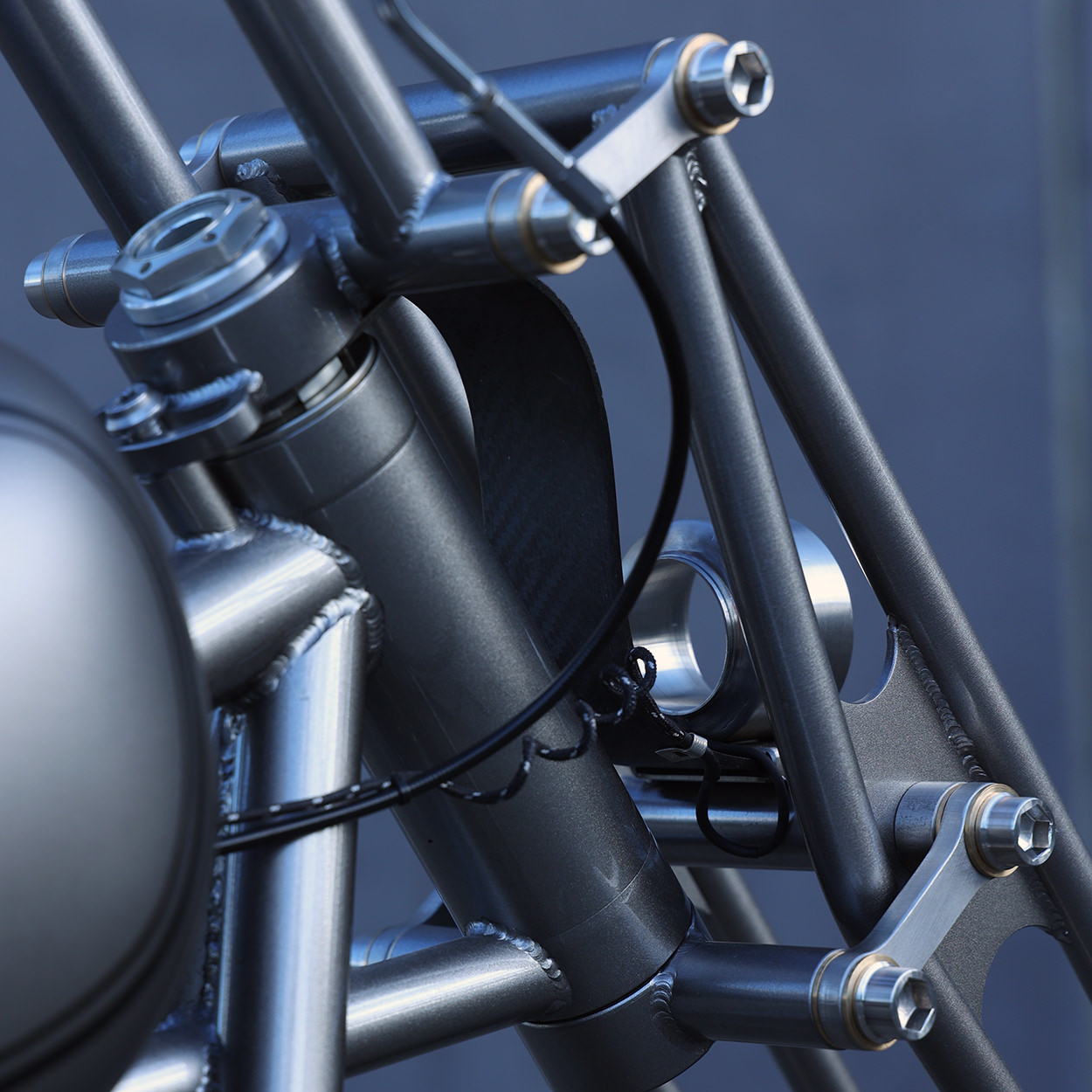 The wheels are distinctly old-fashioned, though. “The front rim is a 22-inch hoop wearing the same tire that a Model T Ford would have used a hundred years ago,” says Nigel. “It’s a Firestone 28×3, and I bought this tire before making the rim. Tires have a big impact on the stance of a bike, and that’s very important to me.”

The wheel rim was rolled by Stephen from Vintage Rims Australia, while Nigel set about designing the spokes. “I love the magnesium wheels of the 70s and especially the Motomags that were used for BMX. This is my take on that style, and also harks back to BMWs early ‘snowflake’ wheel design.” 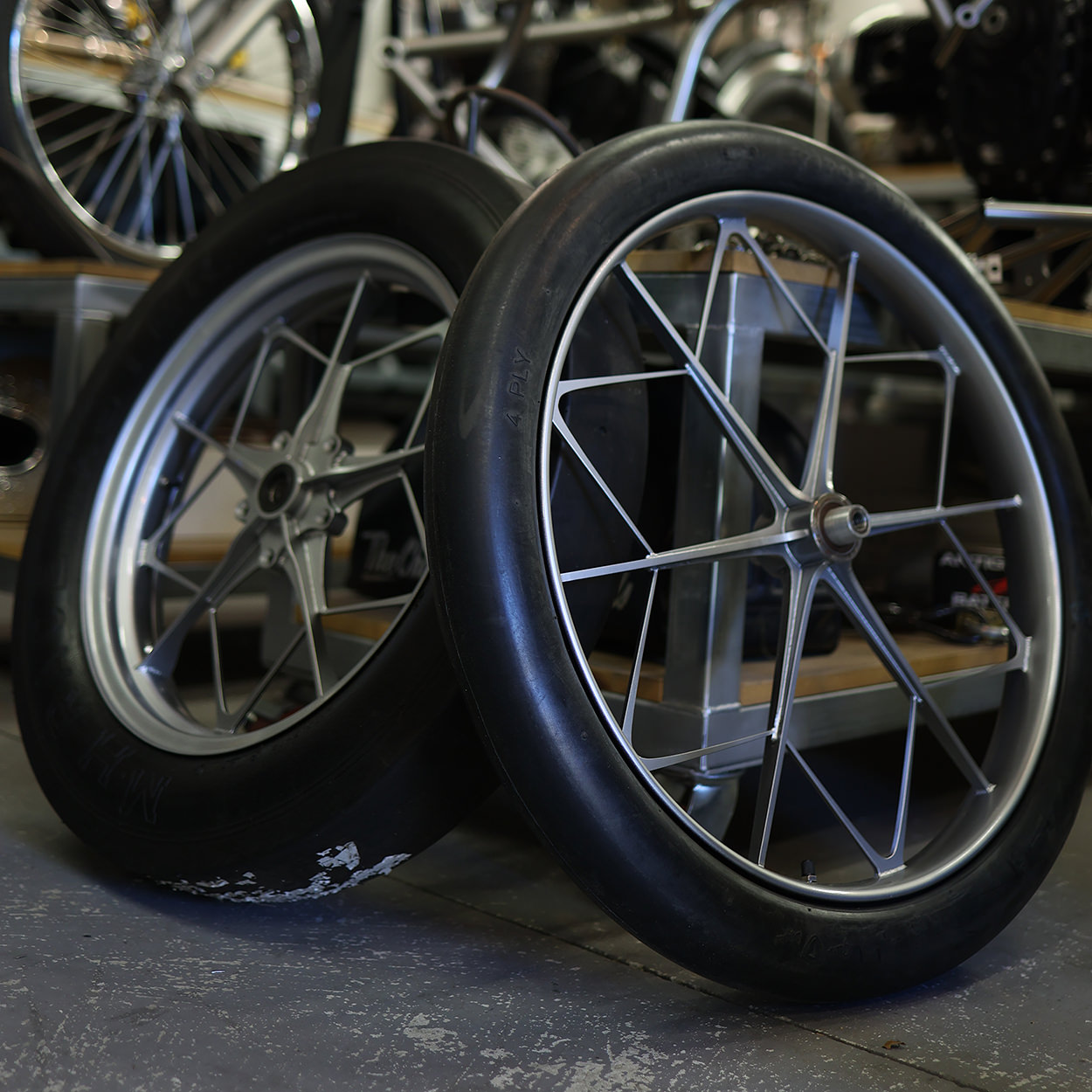 Collaborator Matt Hill drew the wheel and used AutoCAD DXF files to laser cut each individual spoke. Nigel then used the stock wheel bearings from the R nineT, made up a stainless hub, and TIG welded all the spokes together to create the rim. “It took many hours, but the results are worth it.”

The frame is all custom, all chromoly, and has removable lower legs to make it easier to remove the engine. “This mounts the engine in position, and ‘hangs’ it in the frame,” Nigel explains nonchalantly, as if it was just another day at work. 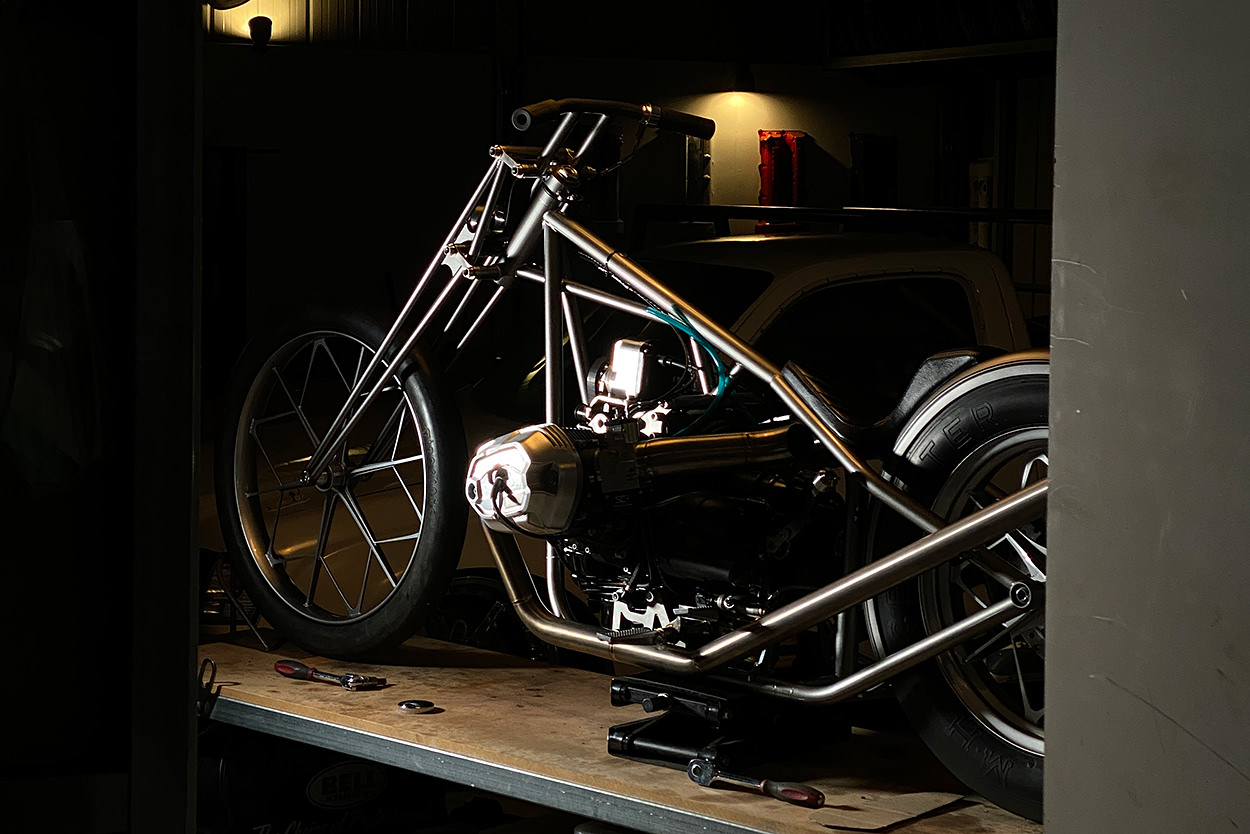 He’s used the stock transmission and drive shaft from the R nineT, but re-angled it to suit the frame. “It gives the bike a very sturdy driveline, and it absolutely rips!” Nigel could have chosen a single-sided arrangement, but traditional frame lines were important to him—so he’s used classic hardtail layout, which he planned out with string lines at the start.

The tank is equally classic, a peanut style taken from the Lowbrow Customs catalog, with the tabs removed to give it a seamless ‘floating’ look on the frame. The rear ‘Manta Ray’ fender comes from Lowbrow too, with the angle of the little upkick neatly matched to the angles of the exhaust pipework and frame. 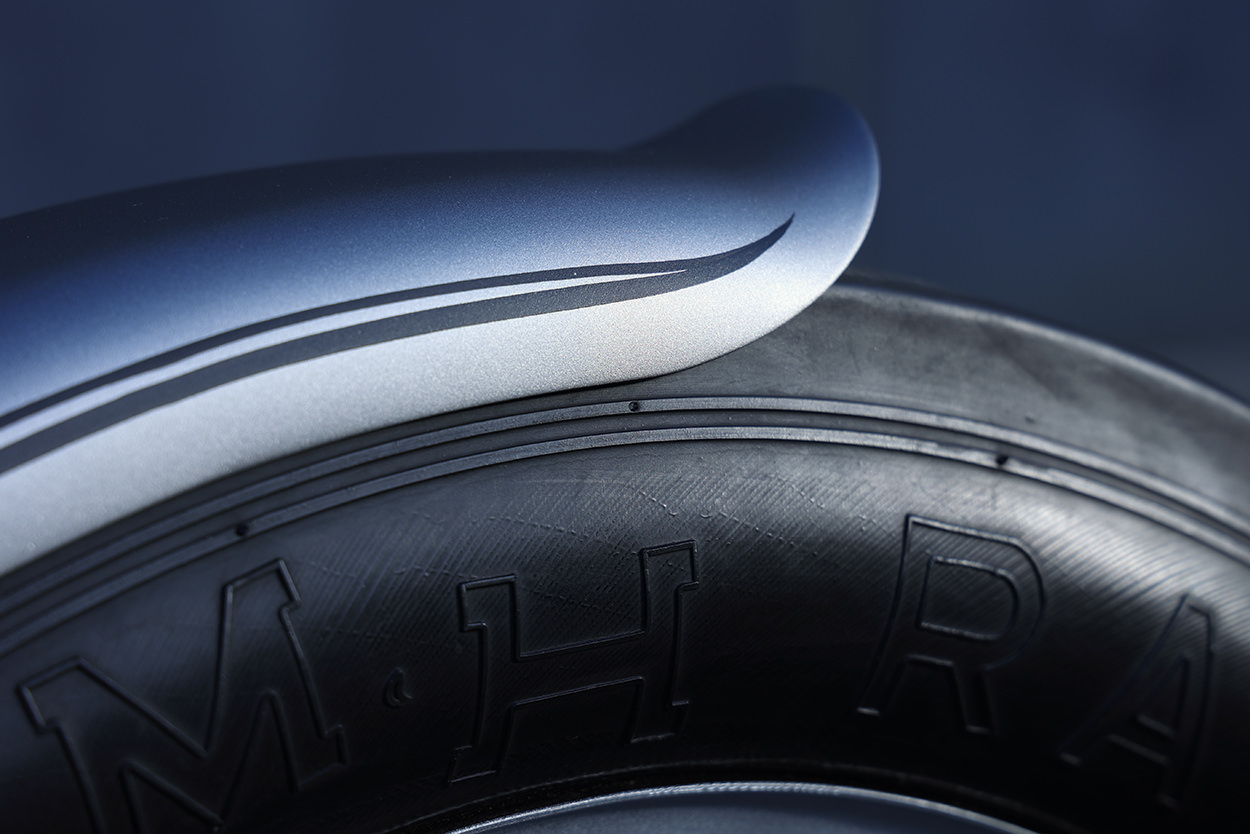 Underneath, and sitting very snug, is an M&H Racemaster 18-inch vintage drag slick. “I love this tire and the diameter really matches the 22-inch front tire,” says Nigel. “The rear wheel came together like the front, but the hub was CNC-cut from stainless steel to suit the stock drive unit.”

The exhaust and intakes are high-tech though, despite their looks. They’re crafted from titanium, and anchor all the angles. “It’s a very analog bike,” Nigel reveals. “The factory ECU and injection is gone, and in its place is a Morris Magneto that’s driven off a pair of dry sump pulleys, which bring a motorsport aspect to this build. I wanted this to emulate a 1960s drag car supercharger, and it fills in the area perfectly.” 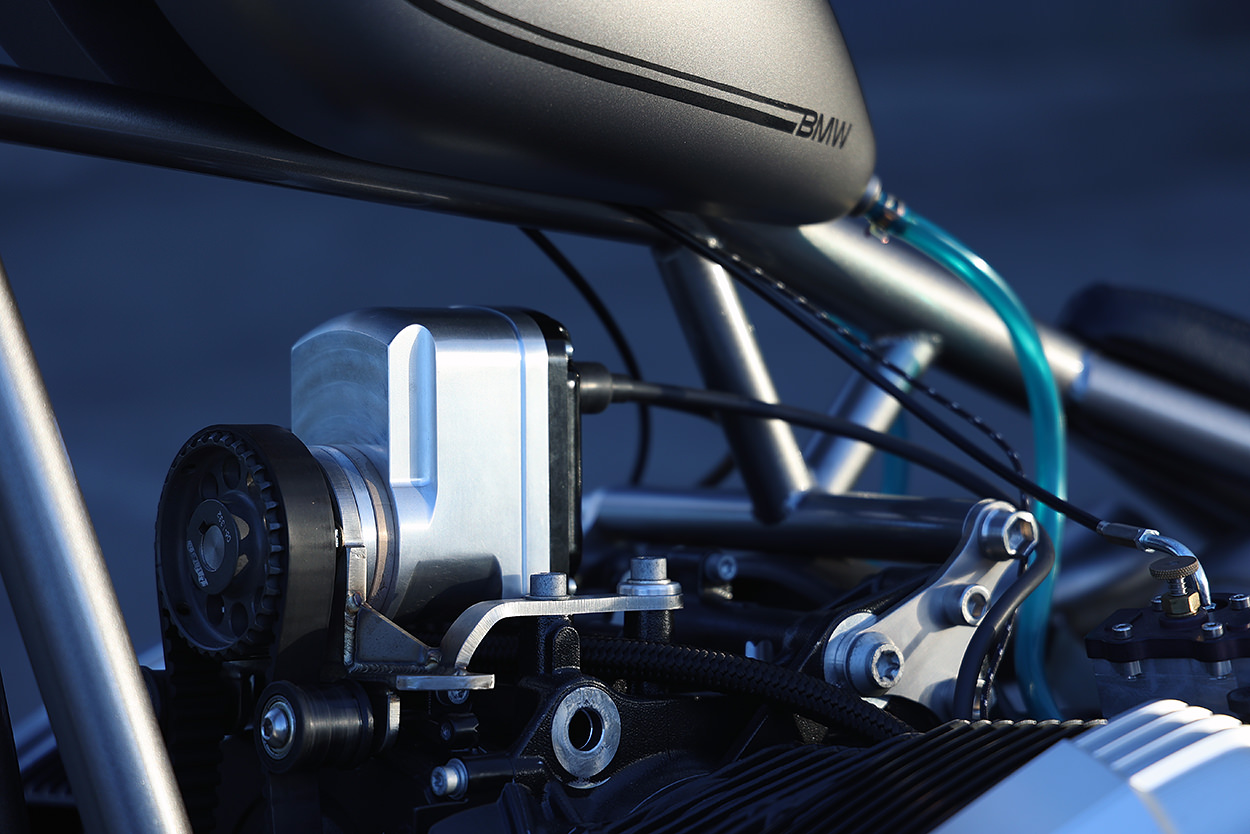 Carbs replace the throttle bodies, but they’re not off-the-shelf. “They were custom-made from billet alloy by Smart Carb and feature a really neat tuning solution that replaces jets.”

That sounds difficult enough, but a less obvious difficulty was the starter. “I ended up mounting an 18V DeWalt battery underneath the motor, and it can be slipped in and out for charging. This allows the factory starter and lights to operate.” 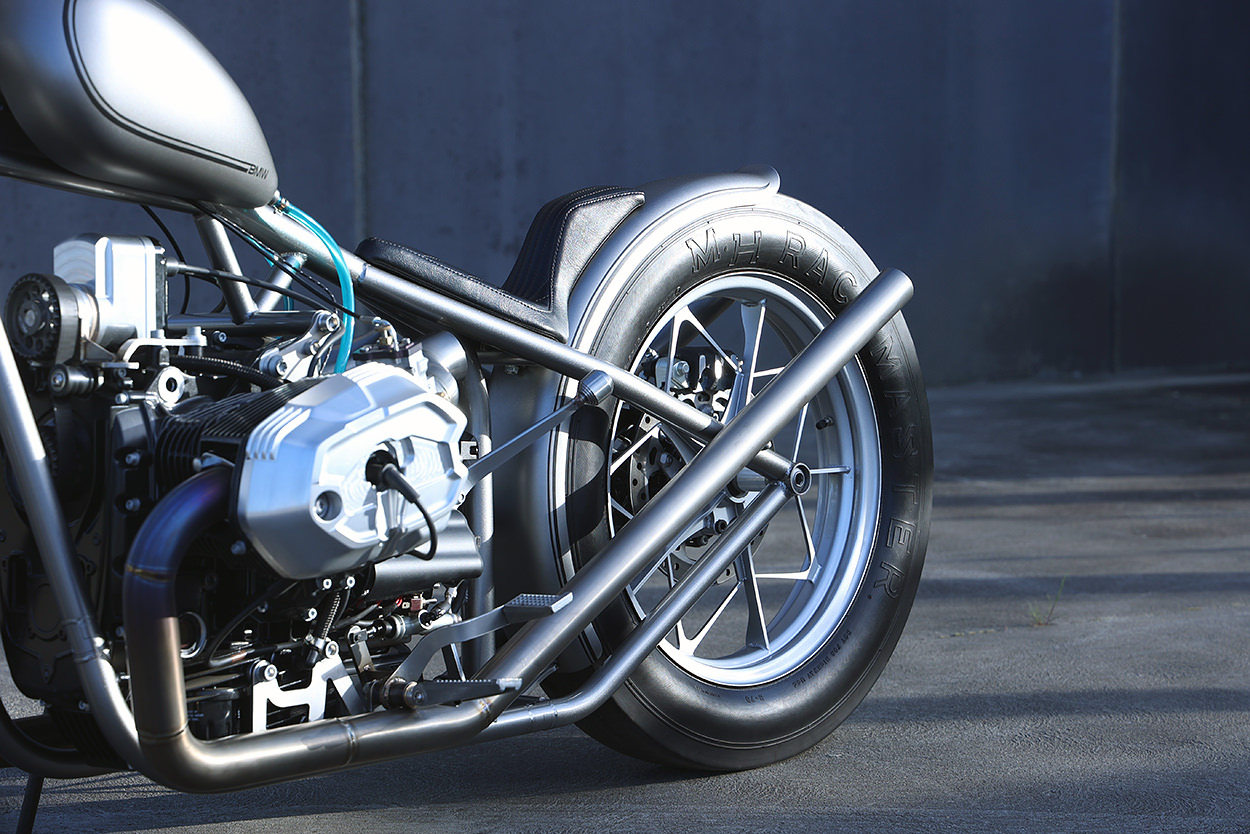 For controls, Nigel has installed a Prism Supply throttle, a rear brake operated by the right heel, and a heel-operated clutch too—driven by a rear brake master. It keeps the hand-fabricated bars as clean as a whistle.

In the end, everything worked out just fine on this build—until the point it was finished. Because if you went to the Born Free show last weekend, you’ll have noticed that the BMW wasn’t there. 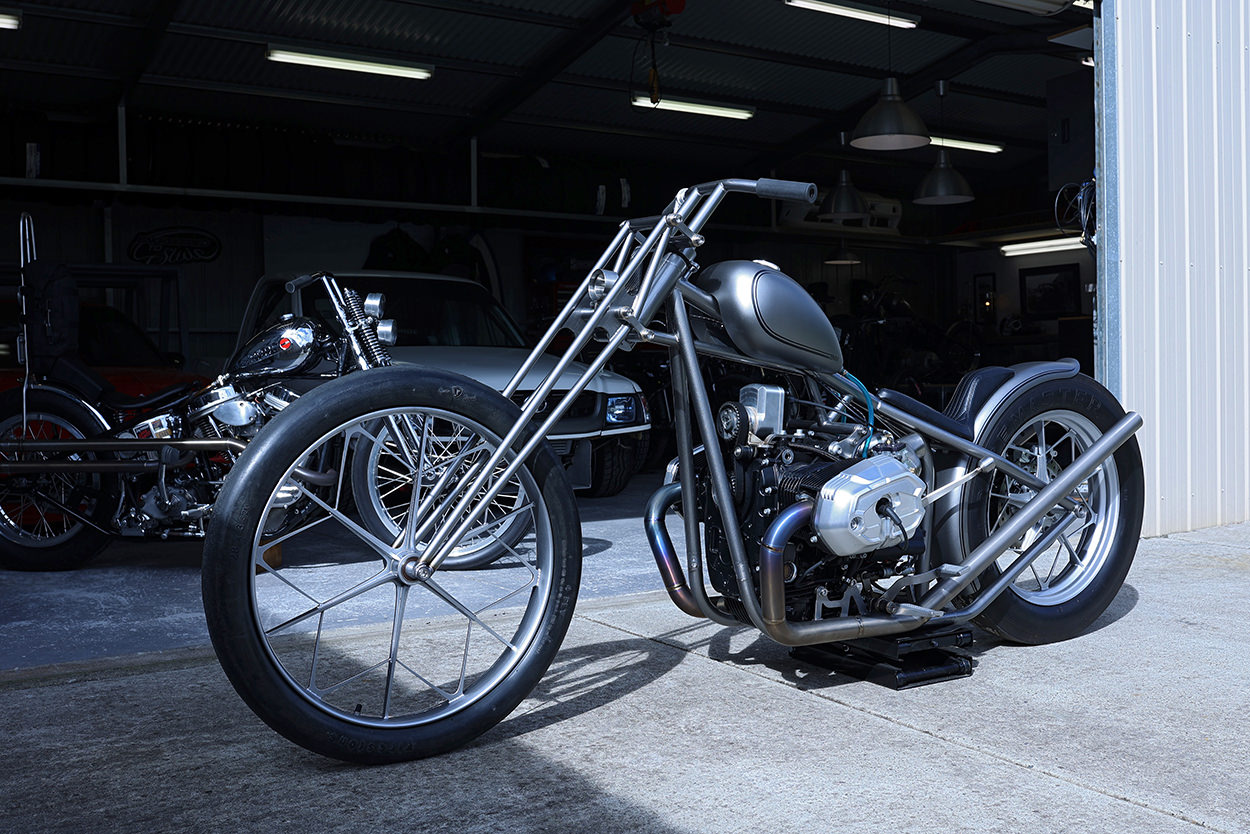 “My application for travel was denied by our government,” says Nigel. “It was a huge letdown, because I really wanted to showcase something a lot different.” And different this BMW certainly is—an intriguing mix of high- and low-tech. Still, Nigel seems sanguine about the situation. “It’s been a wild ride, and I’ve had a lot of fun seeing this bike come to life.”

If you’re interested in fabrication, head over to Nigel’s Engineered To Slide website—it’s a fascinating look at the world of high-end bike-building and metalworking techniques, with a master practitioner as your guide. 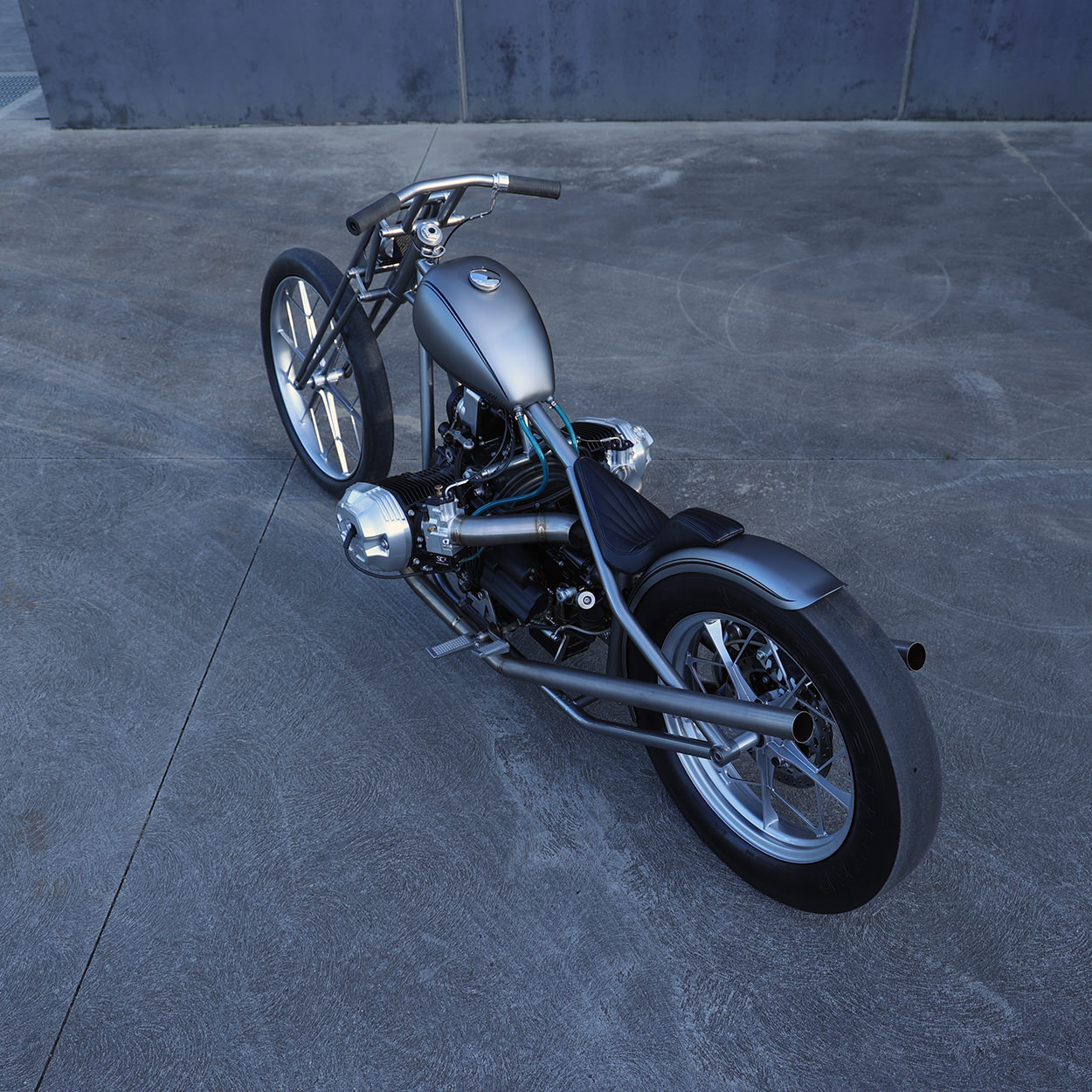