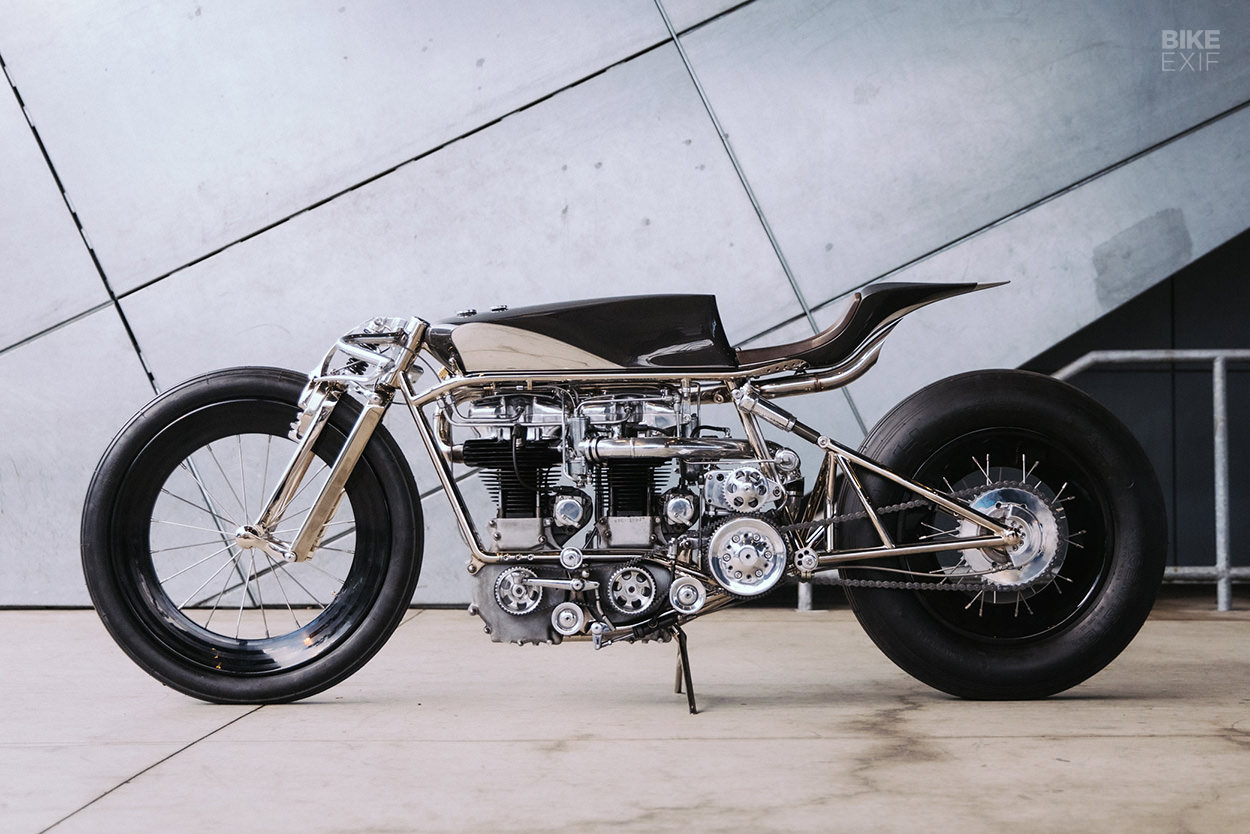 Max Hazan is known for building impossibly elegant, hand-crafted machines. His customs ride the line between motorcycles and art so well, that they confound the usual arguments about function versus form.

Hazan can play both sides of that particular coin, though. He once built a KTM 950 supermotard for personal use, aiming for a pseudo-factory look and ridability. Then a potential customer asked him to build another one just like it… and things snowballed. 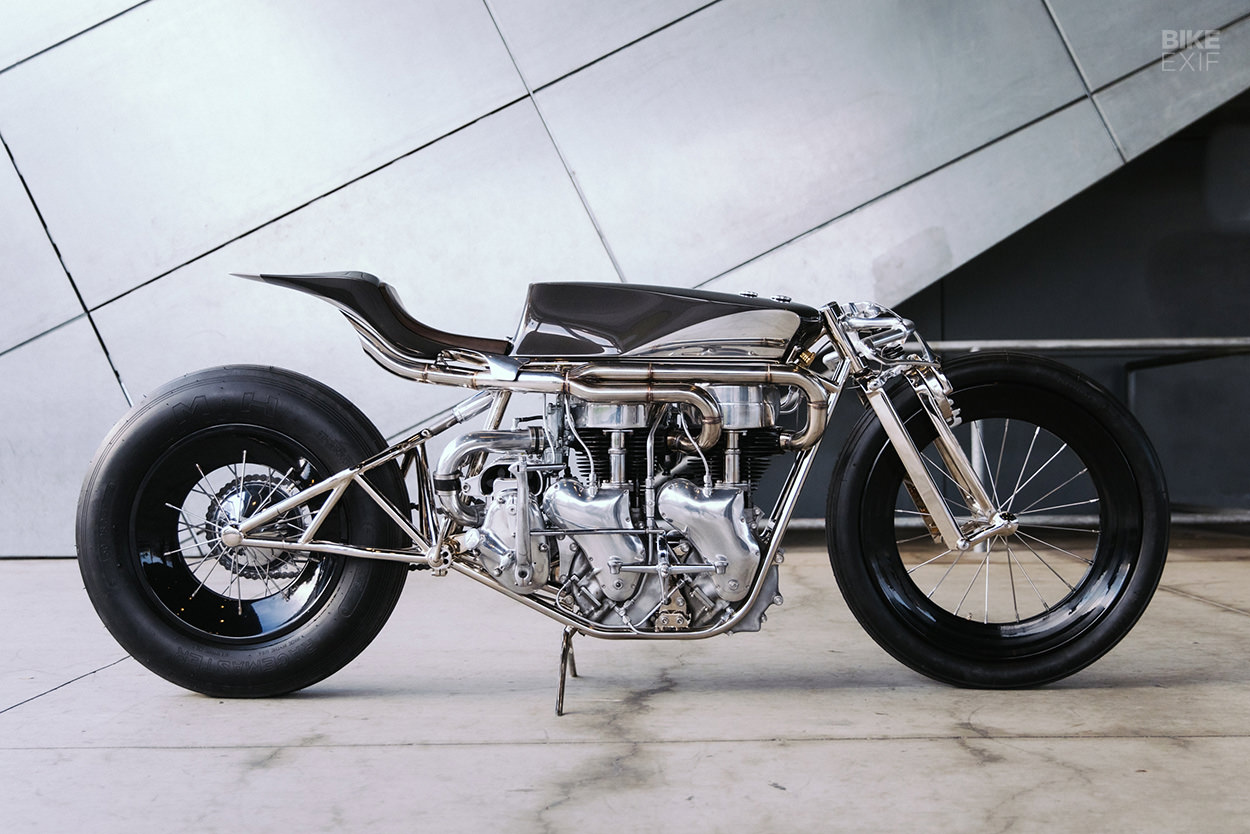 “He actually wanted to buy the 950,” says the Los Angeles-based custom builder, “and was disappointed that I’d sold it to someone else. I was going to build him a similar KTM, but then he saw my Knucklehead sportbike. He decided he wanted something ‘crazy’ now, and something to ride later on.”

The brief eventually evolved into ‘go wild, make whatever you want.’ But it took Max a while to come up with the concept of the twin-engined, bicycle-inspired machine you’re looking at here. “I always like to think of something unique,” he explains. “If I’m going to spend six months working on something, I want it to be worth the effort in the end.” 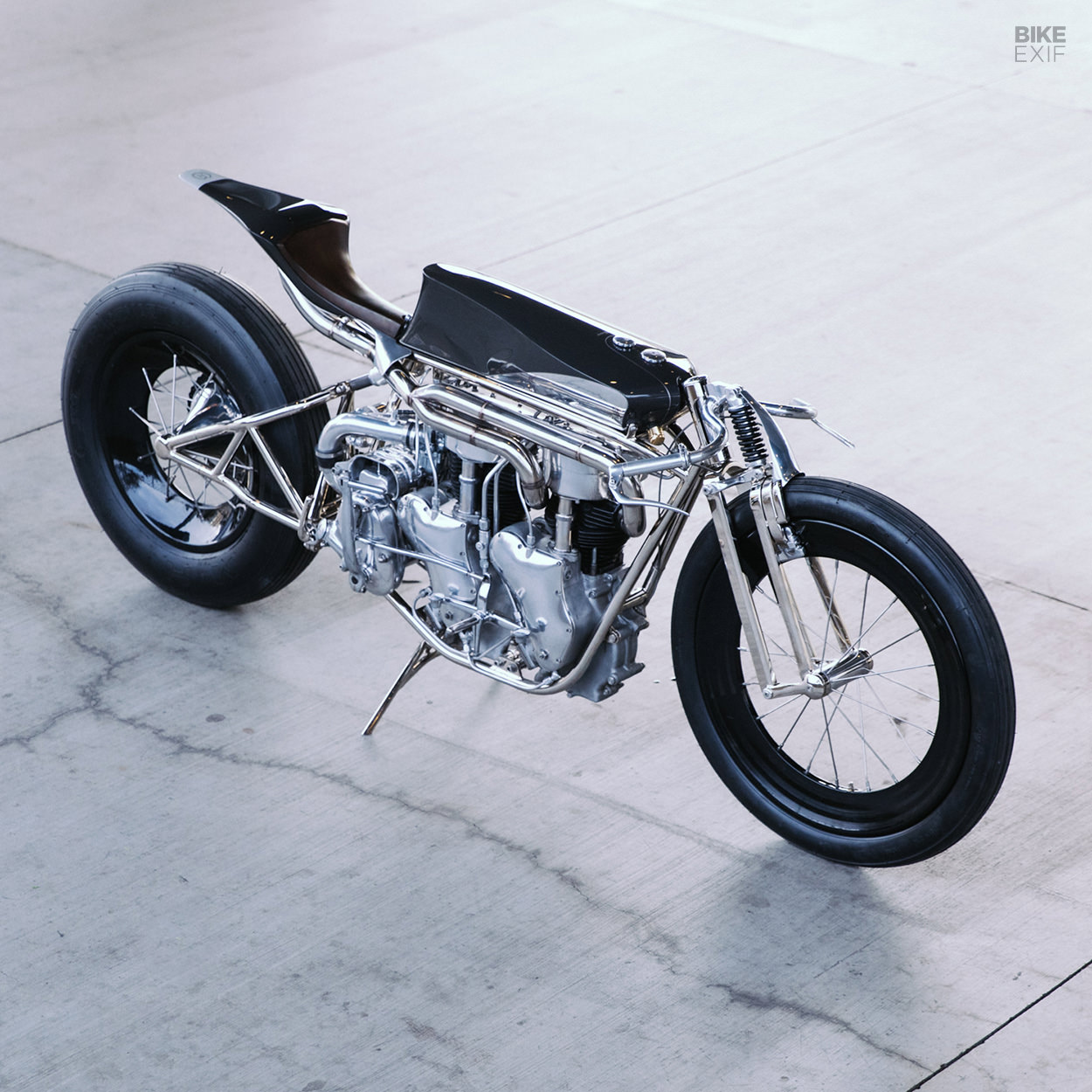 “This idea came when I found one of these Velocette MAC engines on eBay and it turned out the seller was down the street. I knew right away when I saw the shape of the engine cases that two of them would fit together perfectly, and I could make a twin engine bike that didn’t look like the usual twin engine drag bike.”

The post-war MAC motor is a 349 cc air-cooled single, which clocked a remarkable top speed of 75 mph in its day. Max sourced the second unit in England, then added a four-speed Matchless transmission, mounted on its side. 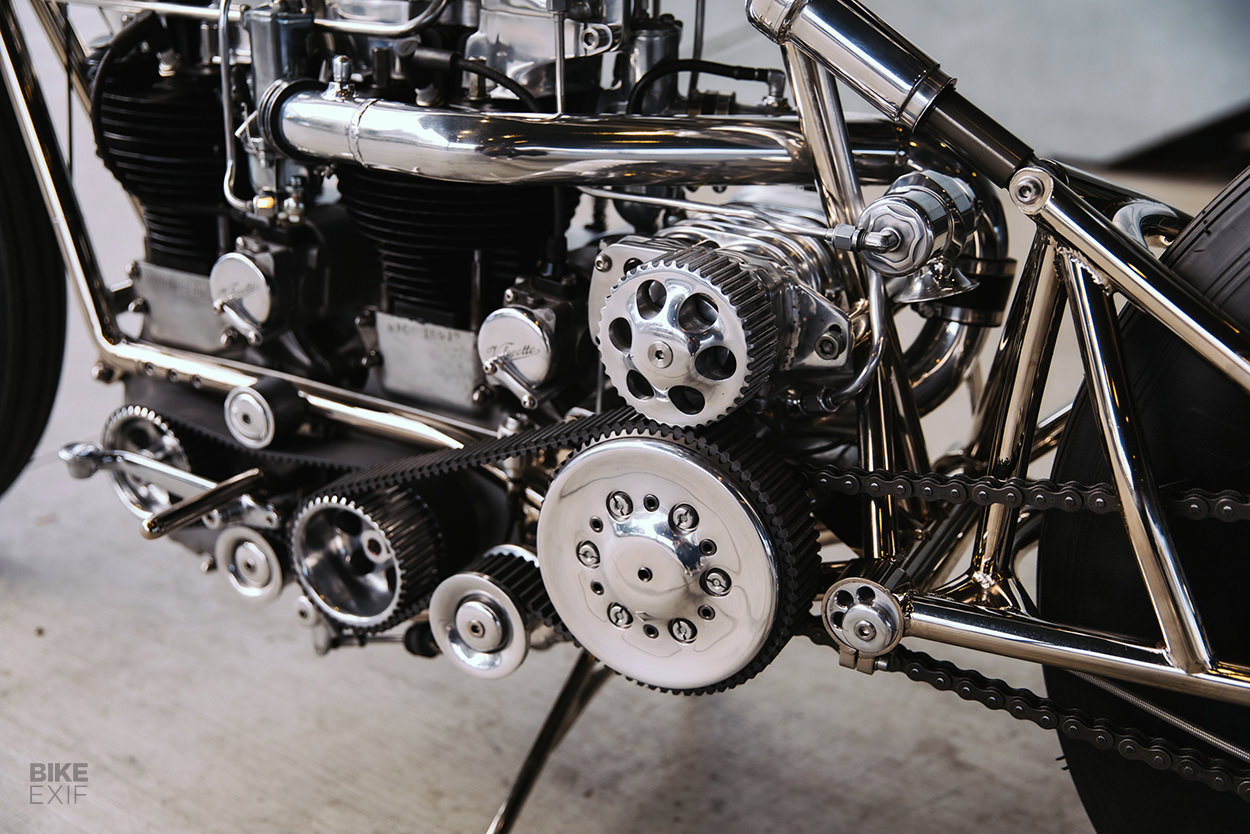 The two powerplants basically run independently, but are linked by a set of belts, running on custom-machined aluminum pulleys that are attached to each main shaft. The final belt is double-sided, so it can simultaneously spin an Eaton TVS R410 supercharger, effectively killing two birds with one stone.

The motors are also stressed members of the custom frame, which is a handcrafted chromoly steel arrangement. Each engine’s crank breather is plumbed into the frame itself, at points where the tubes are angled downwards. The bulk of the oil mist runs back into the engines. 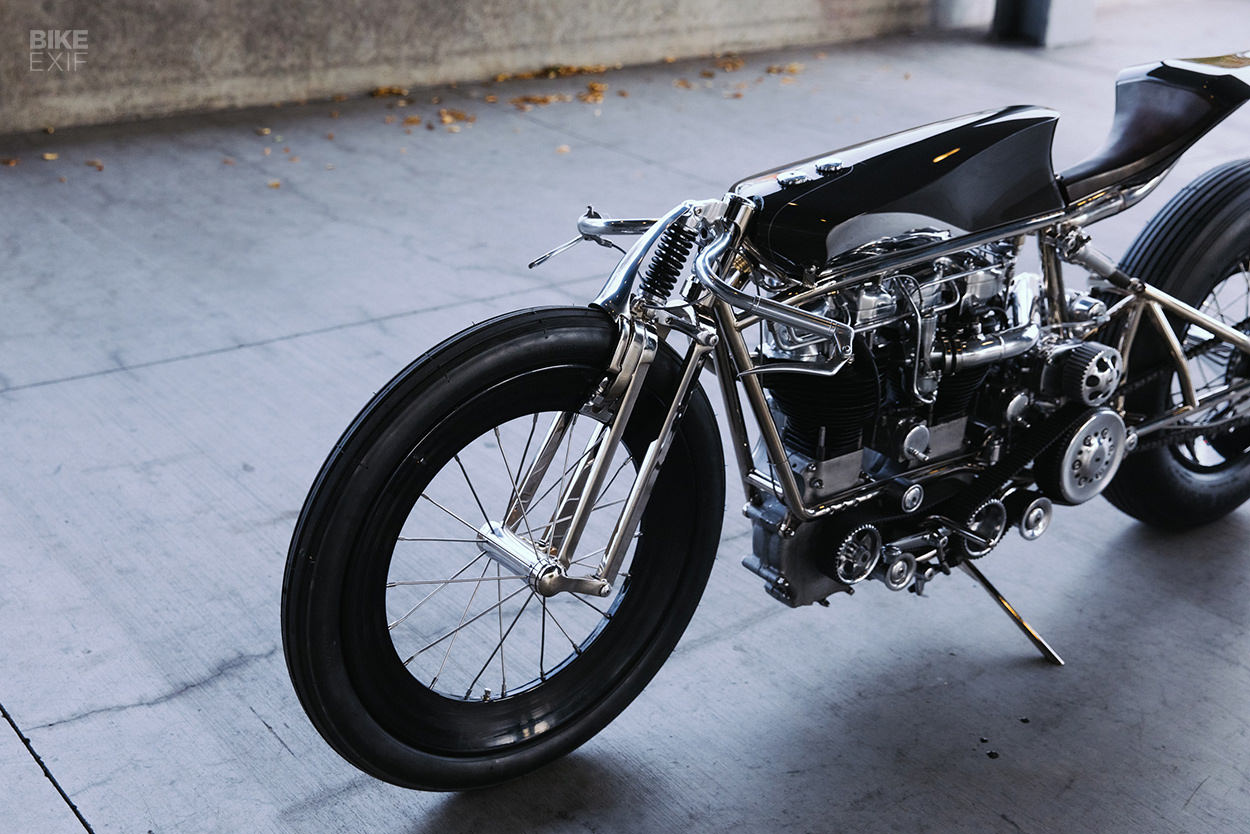 Max built the front suspension from chromoly steel too, with a unique take on a leading link system that uses a single, custom-built shock. It’s impressive enough on its own, but it’s almost overshadowed by the engineering that’s gone into the bicycle-style front wheel.

“I like to come up with new ideas on each project,” says Max. “They usually have something unique… but this bike was wild from front to back.” 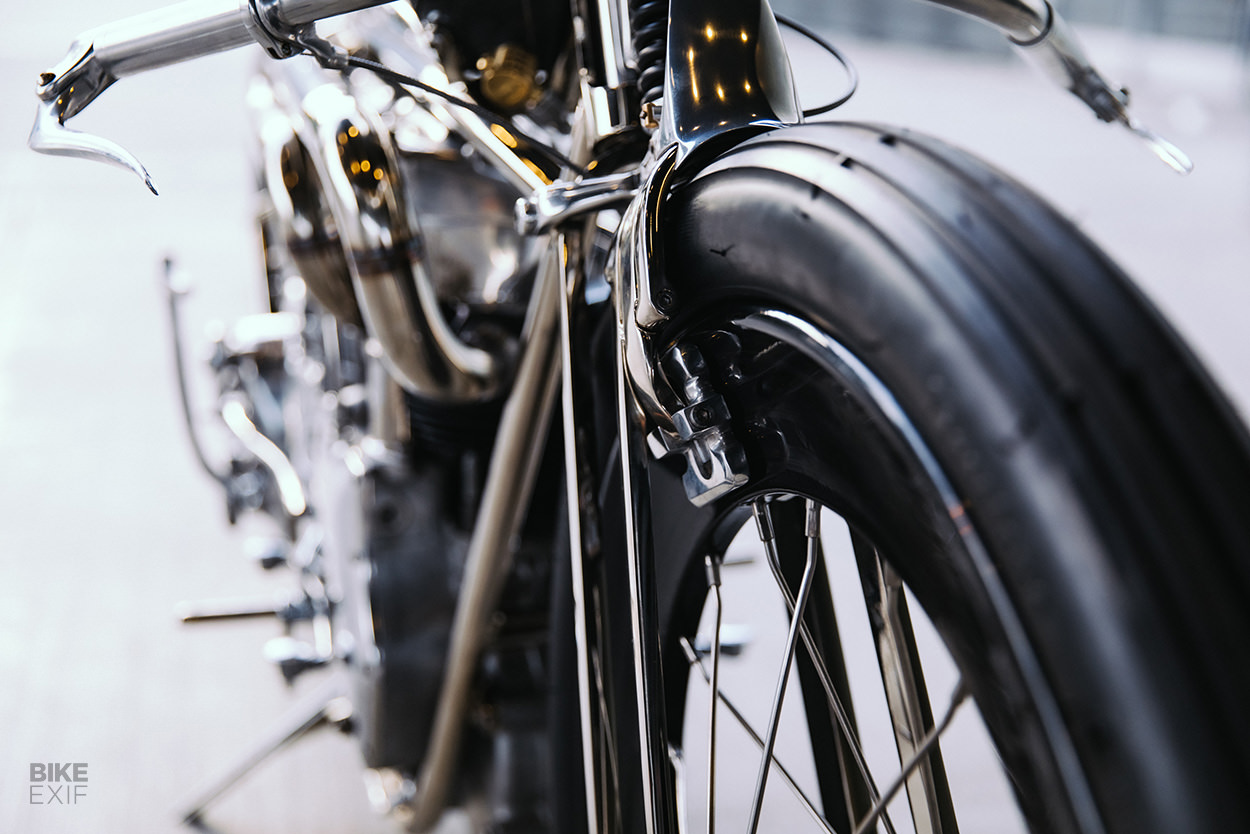 “The front wheel was something that I had wanted to make for years—I love bicycle design and a deep ‘V’ has been on my mind for some time. But it was a clincher wheel, which meant that we couldn’t do it in one piece on the CNC mill. No CNC shop wanted to mess with the idea… other than my friend Mark Atkinson, who ended up making the rear too.”

Mark machined the wheel as two interlocking aluminum halves, held together with stainless steel dowels that are secured by the spokes’ tension. The brake is a traditional bicycle V-brake design, built from scratch, and equipped with three cork pads on each side. Max puts their efficacy at “about a six out of ten—about the same as a vintage drum brake.” 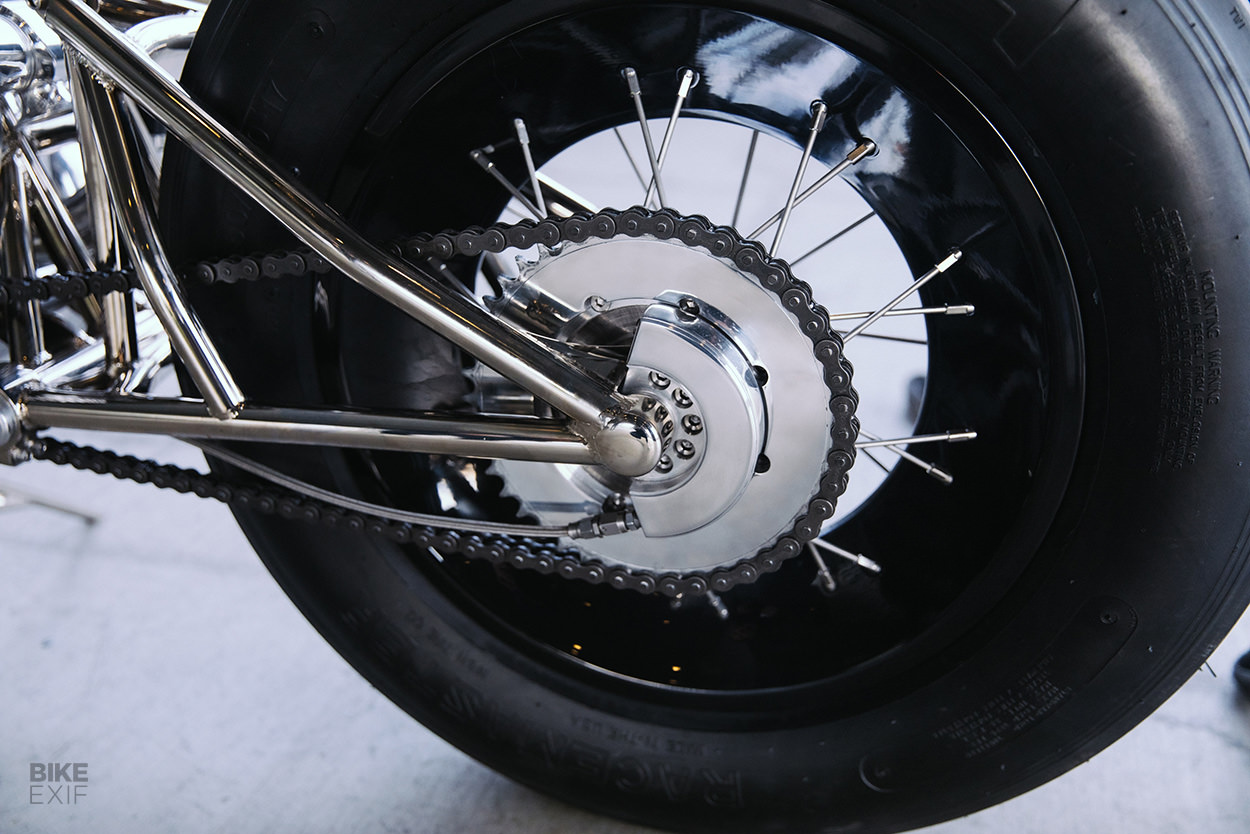 The rear wheel is also a custom aluminum part, but follows a more traditional design. At a glance it looks brakeless, but there’s actually a one-off four-inch stainless steel rotor and a floating caliper, mounted inboard of the rear sprocket.

There’s also no axle or wheel nut to speak of. Instead, the custom chromoly swingarm has a two-piece design, which threads through the wheel. Chain tension is adjustable via an eccentric cam at the swingarm’s pivot point. The side-mounted shock is an air-sprung Fox mountain bike shock that’s been stripped and polished. 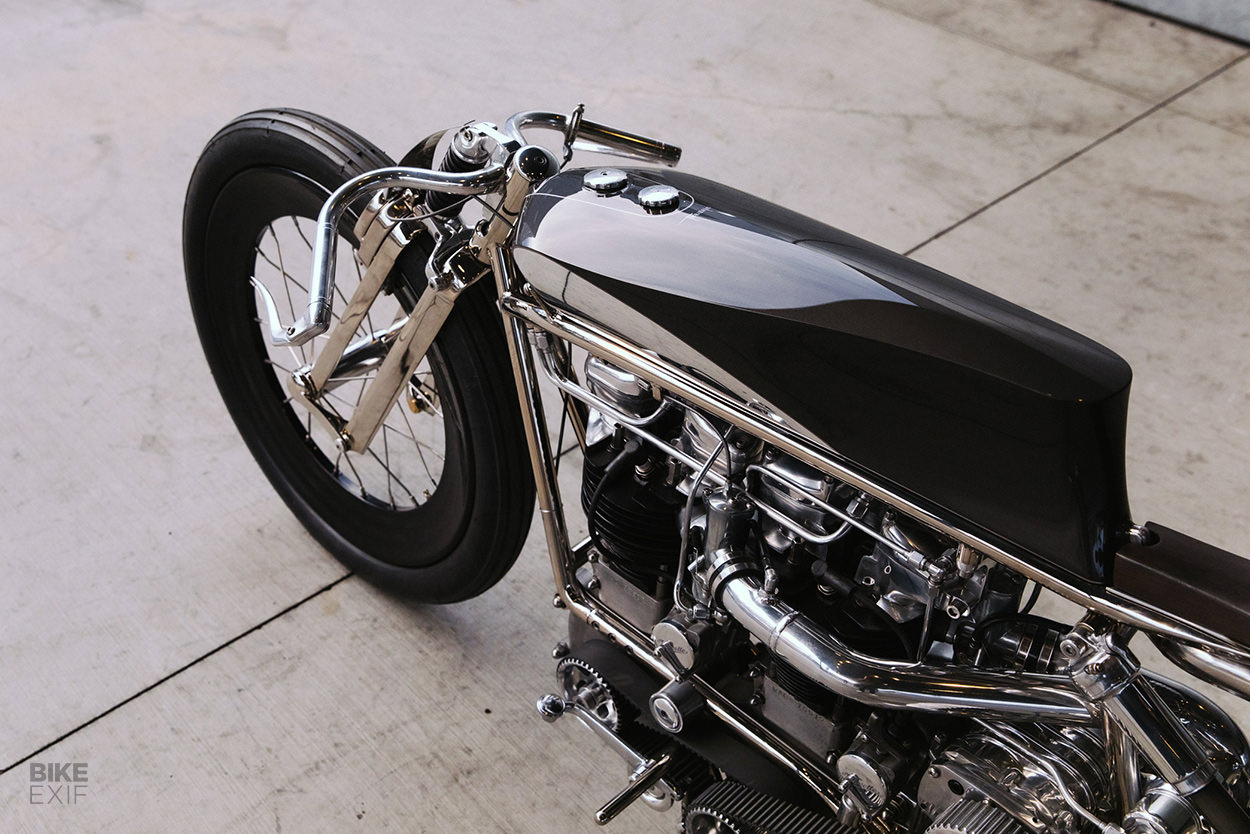 As you’d expect, all of the Velocette’s lithe, flowing bodywork is custom. It’s been hand-shaped from aluminum, with minimal paint and twelve layers of bonded leather for a seat. The lines are traced by the exhaust, which snakes up and under the tail section. Keen eyes will also spot two filler caps on the fuel tank, because there’s an oil reservoir hidden inside it too.

The fuel tank is pressurized by boost from the supercharger, so that the blow-through carb system can be fed without needing a fuel pump. “It makes about 6 psi with the current 1:1 drive ratio,” Max explains, “and as crazy as the setup sounds, it runs like a naturally aspirated bike.” 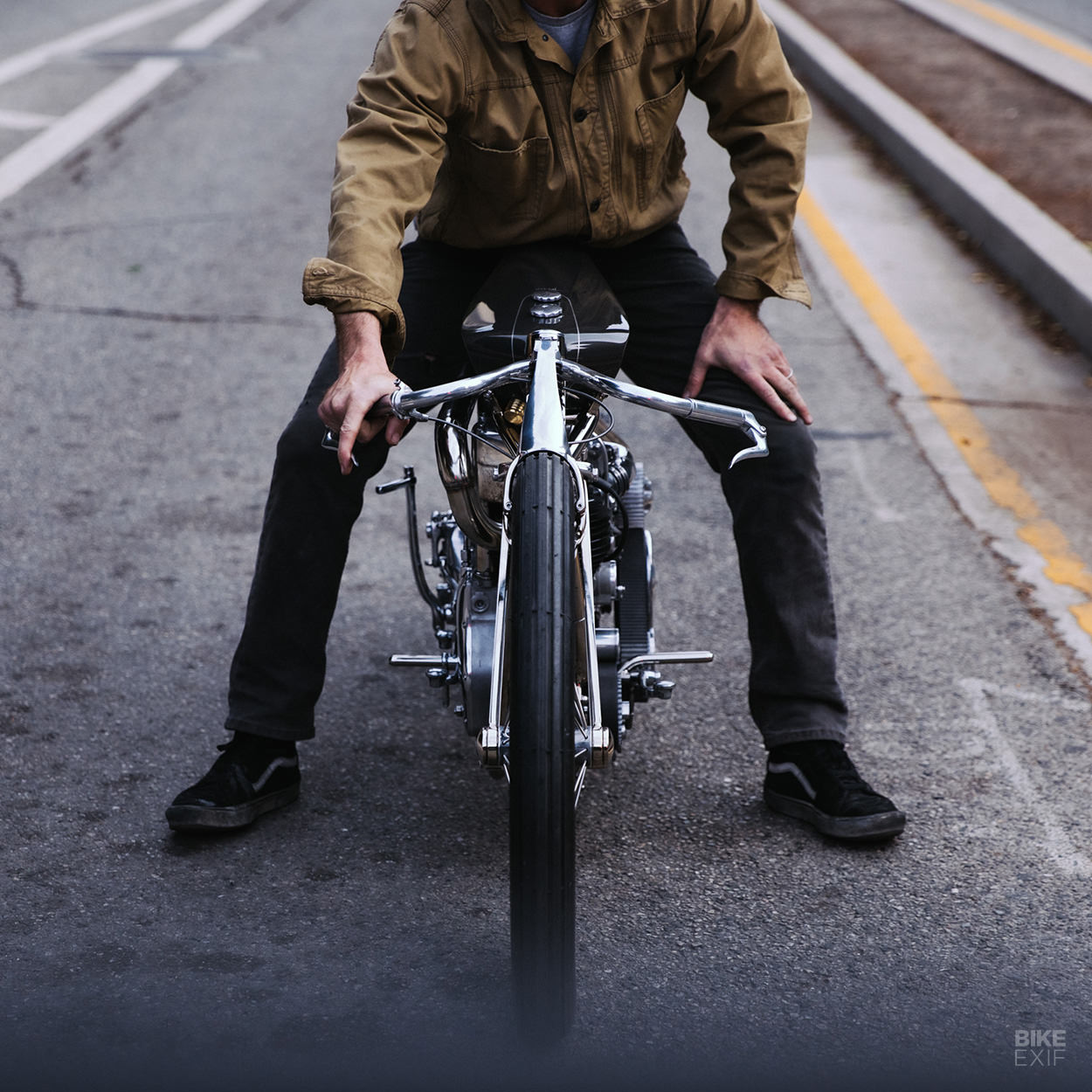 Max’s Velocette is as narrow as it is beautiful, and also utterly unique. “Although it’s about eight feet long, it feels like a bicycle with two engines,” he says.

“The power is not mind-blowing, but if I had to guess I’d say it makes around 50 hp between the two 70-year-old 350s. And after about thirty minutes of riding you need to give your ass a break—but practicality wasn’t a part of this project.” 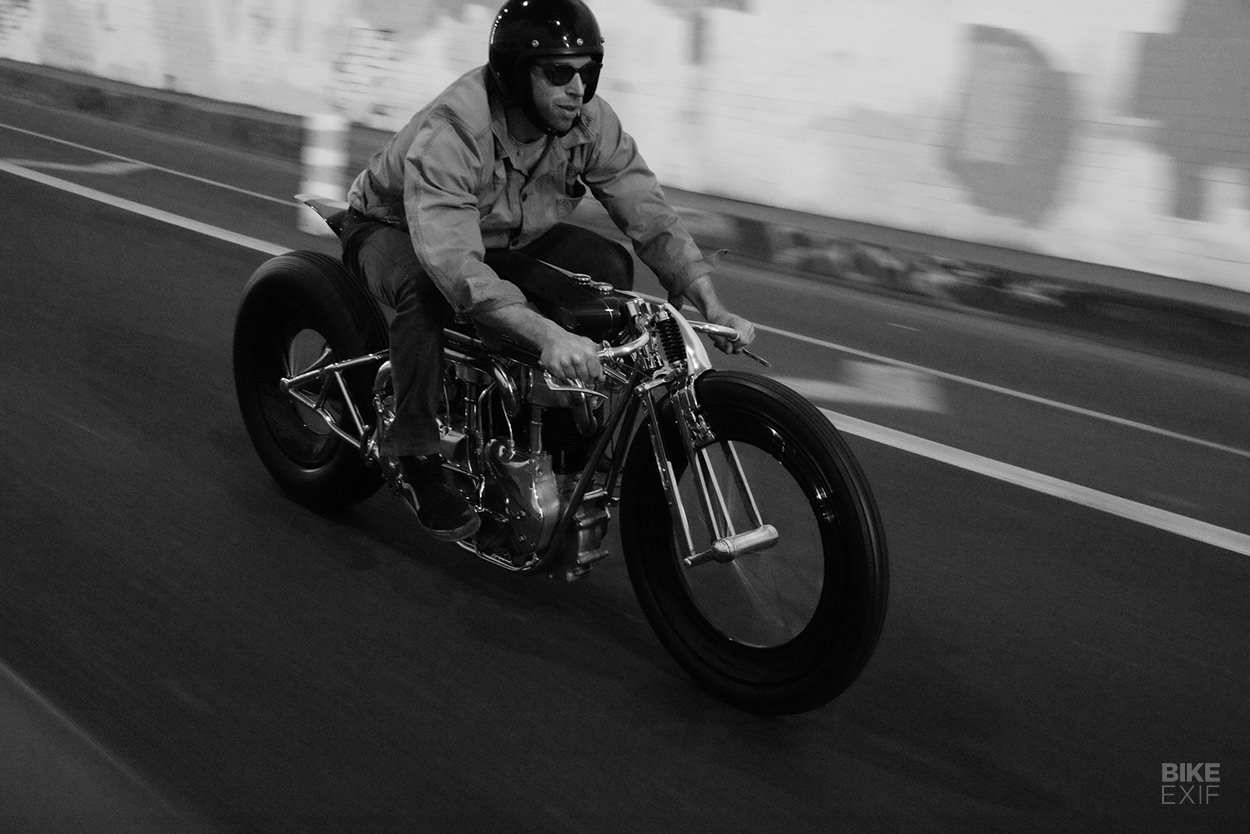 “This project was also one of the hardest to complete. It spanned a pandemic, the shutdown in LA, the arrival of our son Jack, and the sale and purchase of our home. And I did almost everything you see twice, including the paint, to get it where I was happy.” 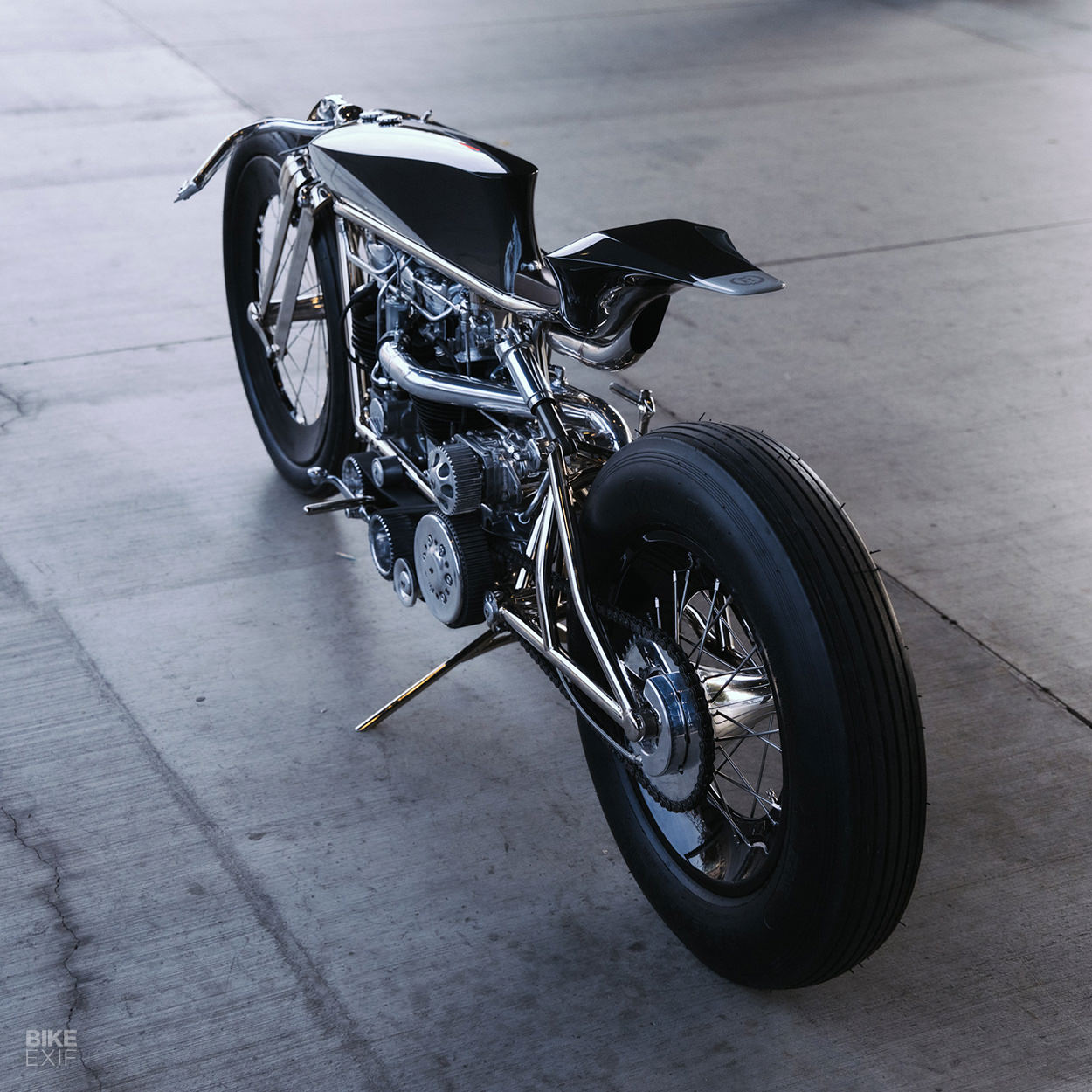