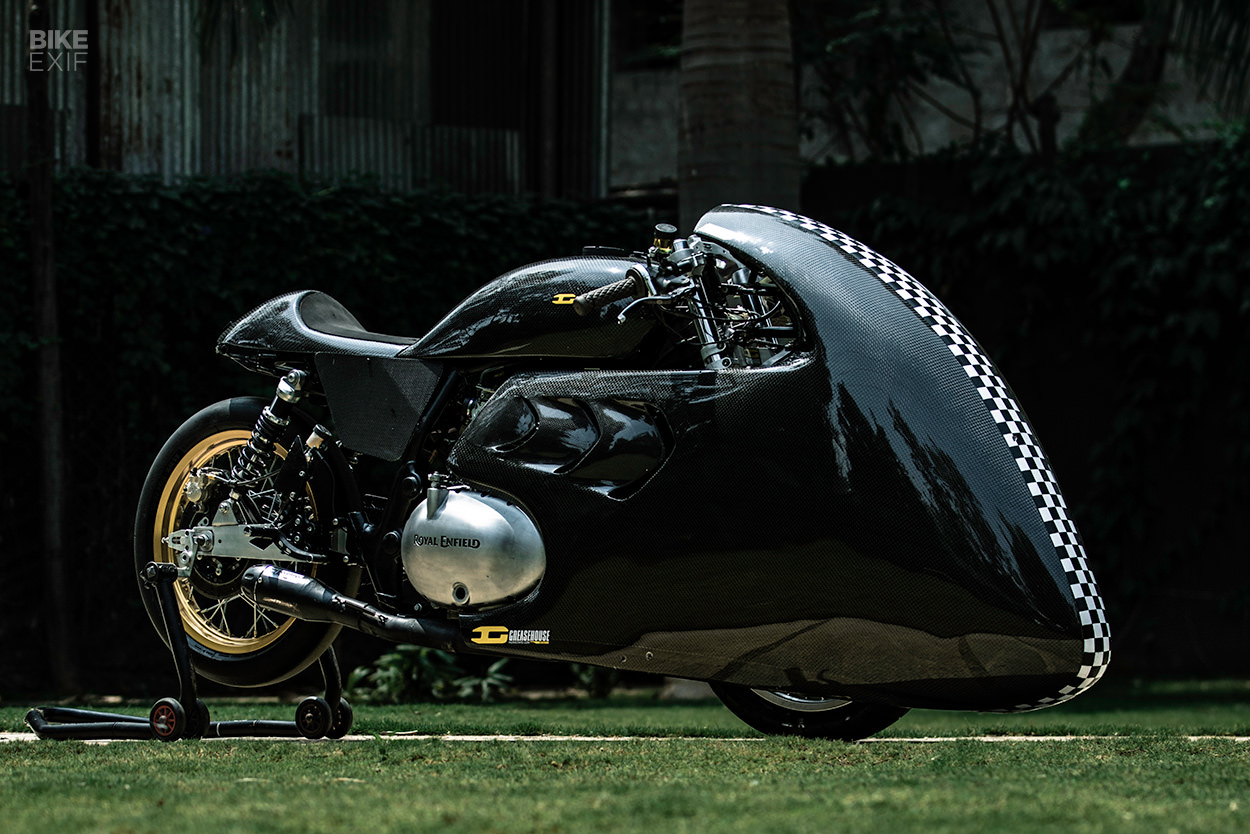 We all have a friend whose motorcycle is lathered with carbon fiber parts—and although they’ll claim otherwise, we know that it’s more for vanity than performance. But this Royal Enfield Continental GT 650 and its carbon fiber dustin fairing tick both of those boxes. That’s because India’s Greasehouse Customs wanted to build an Enfield that would look great and be quick.

Based in Bangalore, Greasehouse is a division of IndiMotard—a multi-faceted company that offers parts, service, tuning, custom work, motorcycle tours and even rider training. They got the brief for this build directly from Royal Enfield, with a mandate to build a “fast, fun drag motorcycle.” 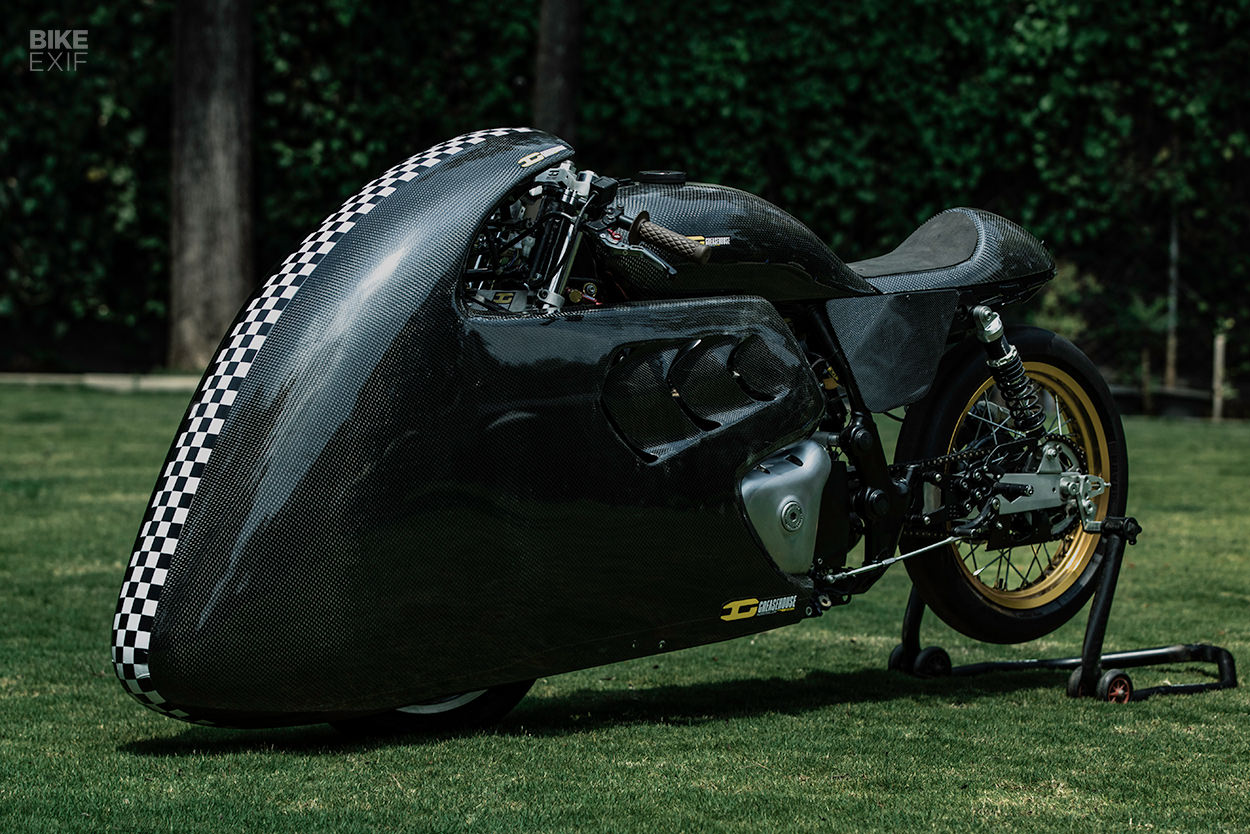 “Royal Enfields have always been special motorcycles in the heart of every Indian biking enthusiast,” explains IndiMotard and Greasehouse owner, Anand Dharmaraj. “The 650 twins from Royal Enfield were a revelation in the Indian motorcycling market, so we thought we’d give it the Greasehouse treatment.”

“The objective of this build was to create the fastest Royal Enfield 650 drag motorcycle in India, using minimal imported parts. In other words, make it in India.” 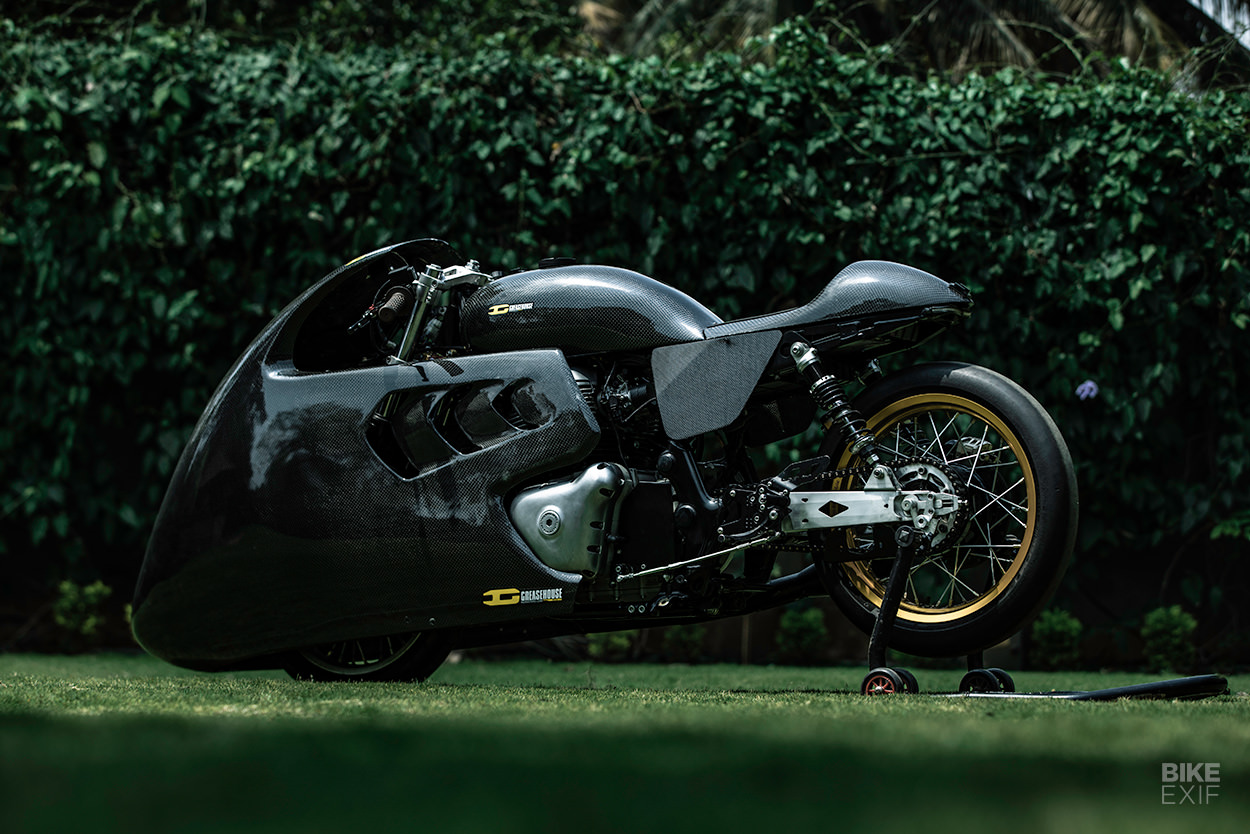 Greasehouse started off by tearing the Continental GT down to its nuts and bolts, and weighing every part to find out where they could shave weight off. With a clear battle plan in mind, they put the bodywork on the back burner to focus on the engine first.

A stock Royal Enfield 650 makes around 47 hp at the crank, but this one’s sending 62.2 hp to the back wheel—and it’s been tuned to optimize power delivery at low revs. To get it there, Greasehouse installed high compression pistons from S&S Cycle, ported and flowed the heads, and added bigger injectors. Tuning was done via Race Dynamics’ Piggyback ECU and FuelX Autotune systems. 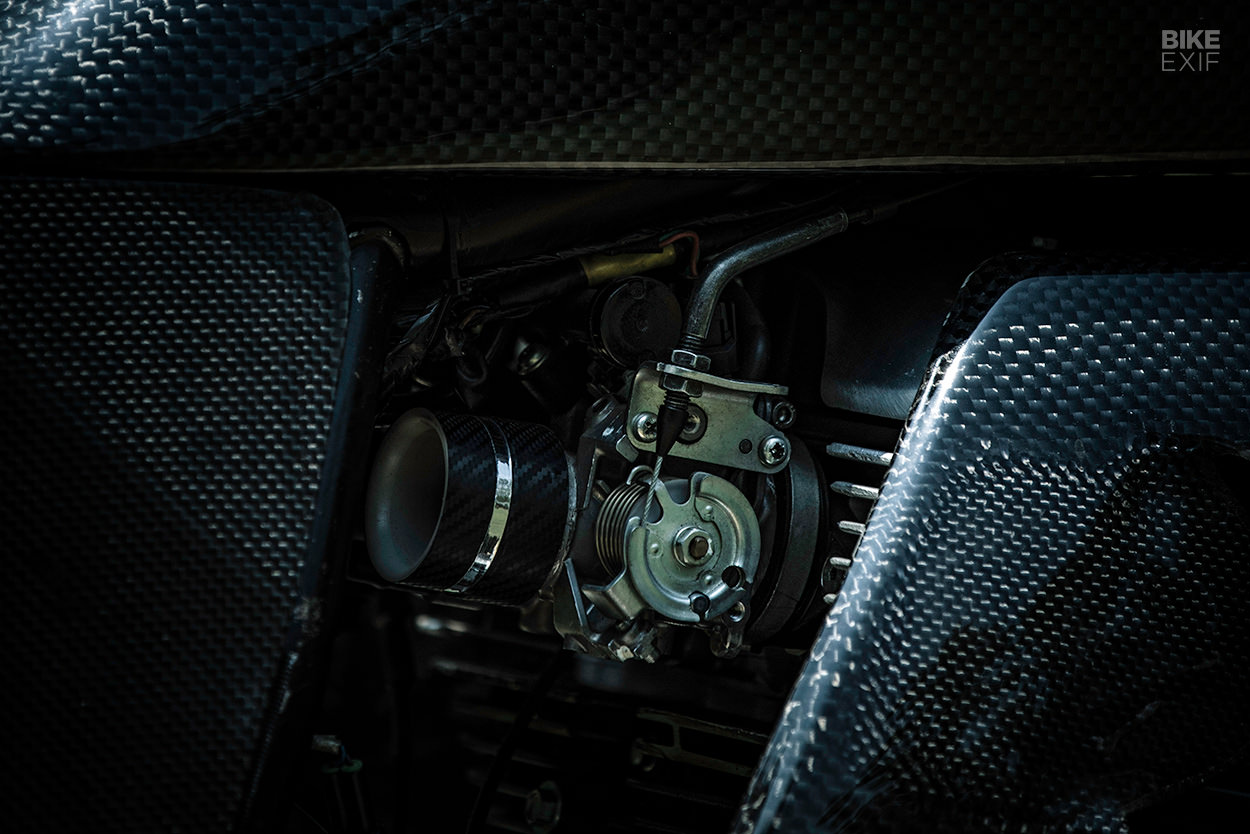 The motor now breathes in via a pair of velocity stacks, and out though a custom-made two-into-one exhaust. Since this Enfield doesn’t need to be street legal, the wiring’s been stripped down to the bare essentials, and hooked up to a Lithium-ion battery. There’s also a Rekluse clutch and a quick-shifter; essential equipment on the drag strip.

Greasehouse kept the suspension mods to a minimum. The forks were lowered and stiffened, and the twin rear shocks were swapped out for a pair of preload-adjustable YSS units. 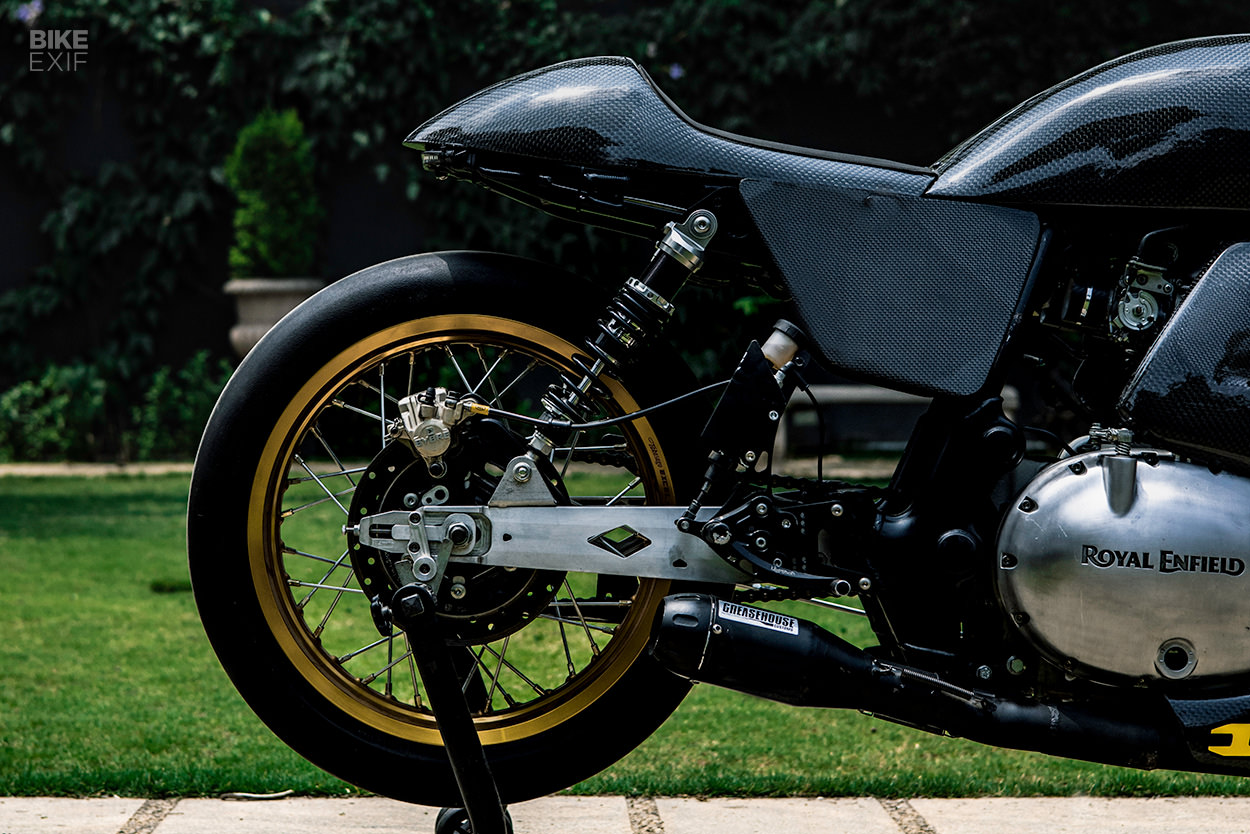 The wheels were upgraded too, mostly to save weight, and to downsize them from 18 to 17 inches. The front wheel features a lighter hub and an aluminum hoop, while the rear features an Excel rim laced to the OEM hub. Both ends are wrapped in Michelin race slicks, and there’s a lighter brake rotor up front.

A lot of weight was saved by swapping out stock parts with custom-made aluminum replacements. Those include the subframe, an adjustable CNC-machined swingarm, and new yokes with adjustable rake. The parts look great too, with subtle branding machined into the front of the top yoke. 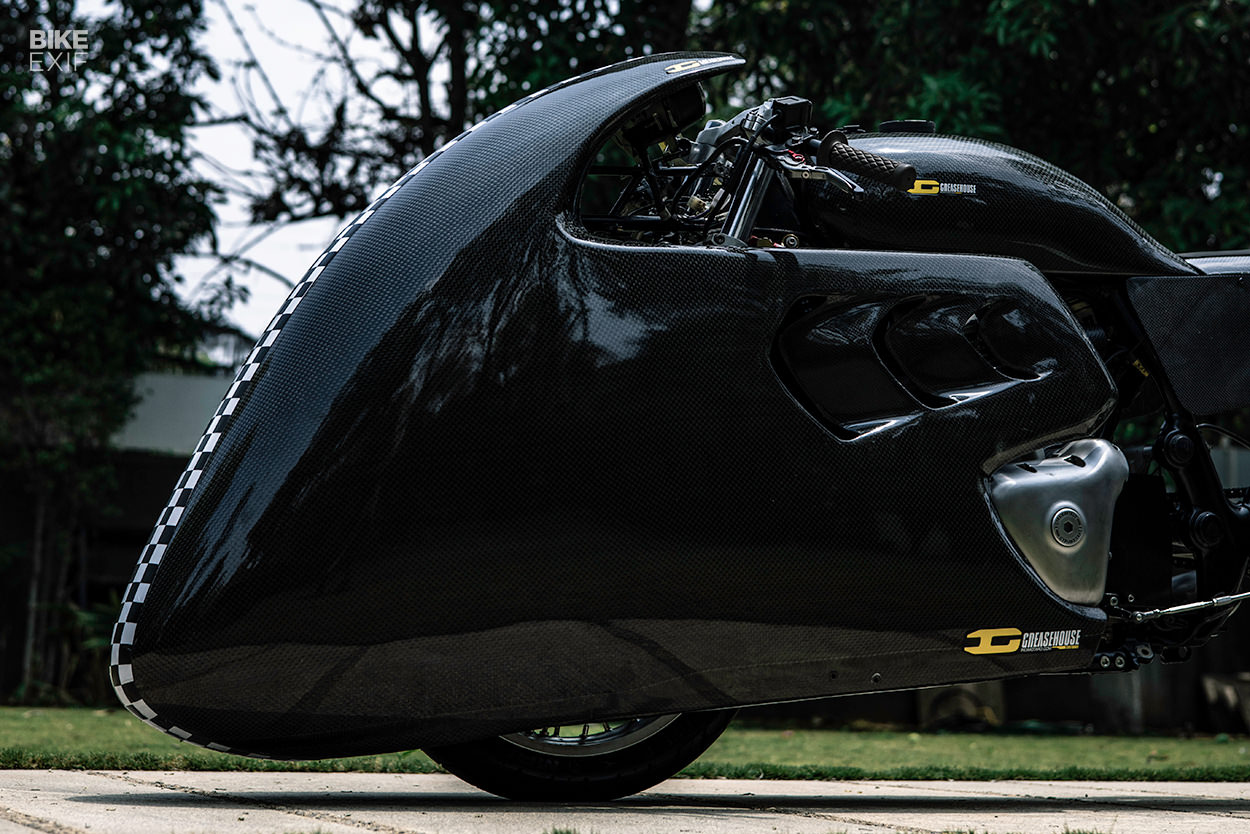 As you can tell, there’s no original bodywork left on the Enfield either. Greasehouse wrapped it in a handmade carbon fiber dustbin fairing, that they admit was as much about the look as functionality. “We had two major inspirations,” says Anand, “The ‘Fastest Indian’ by Burt Munro and the ‘Sprintbeemer‘ by LuckyCat Garage.”

The carbon fiber tank cover, tail and side covers are one-offs too. Fuel is stored in a hidden aluminum fuel cell; it holds less than a gallon, but that’s all it needs to set times. 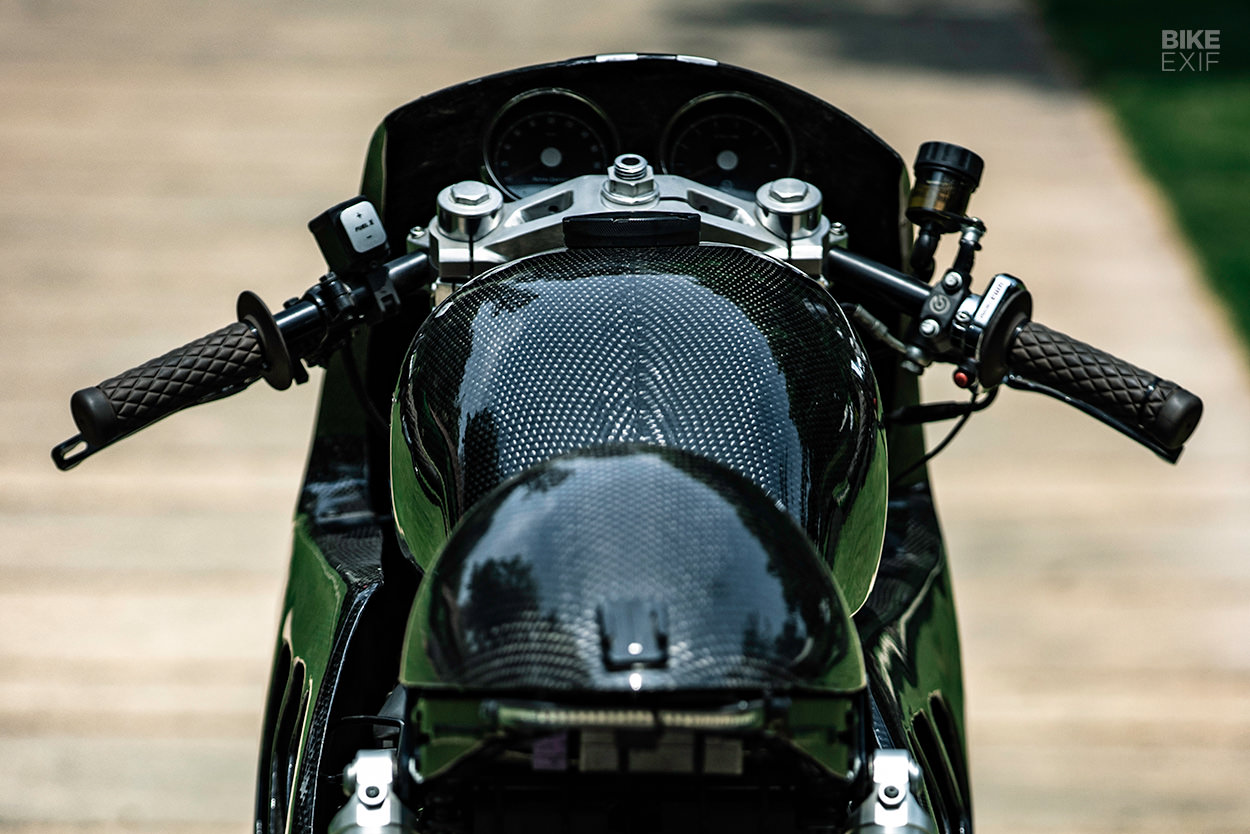 Tucked behind the dustin fairing are the stock Royal Enfield clocks, along with CNC-machined clip-ons, new grips, an UMA Racing quick-throttle and an RCB brake master cylinder. The rear-sets are custom too, and the bike’s kitted with a full complement of titanium and stainless steel fasteners.

Greasehouse have dubbed their creation ‘Dunaali,’ which means double-barreled shotgun. It certainly looks appropriately brutal, finished with a gloss coat over the raw carbon fiber, and a simple checkered flag strip to make its intentions clear. And it’s a lot lighter than stock too, clocking in at 170 kilos [375 lbs]. 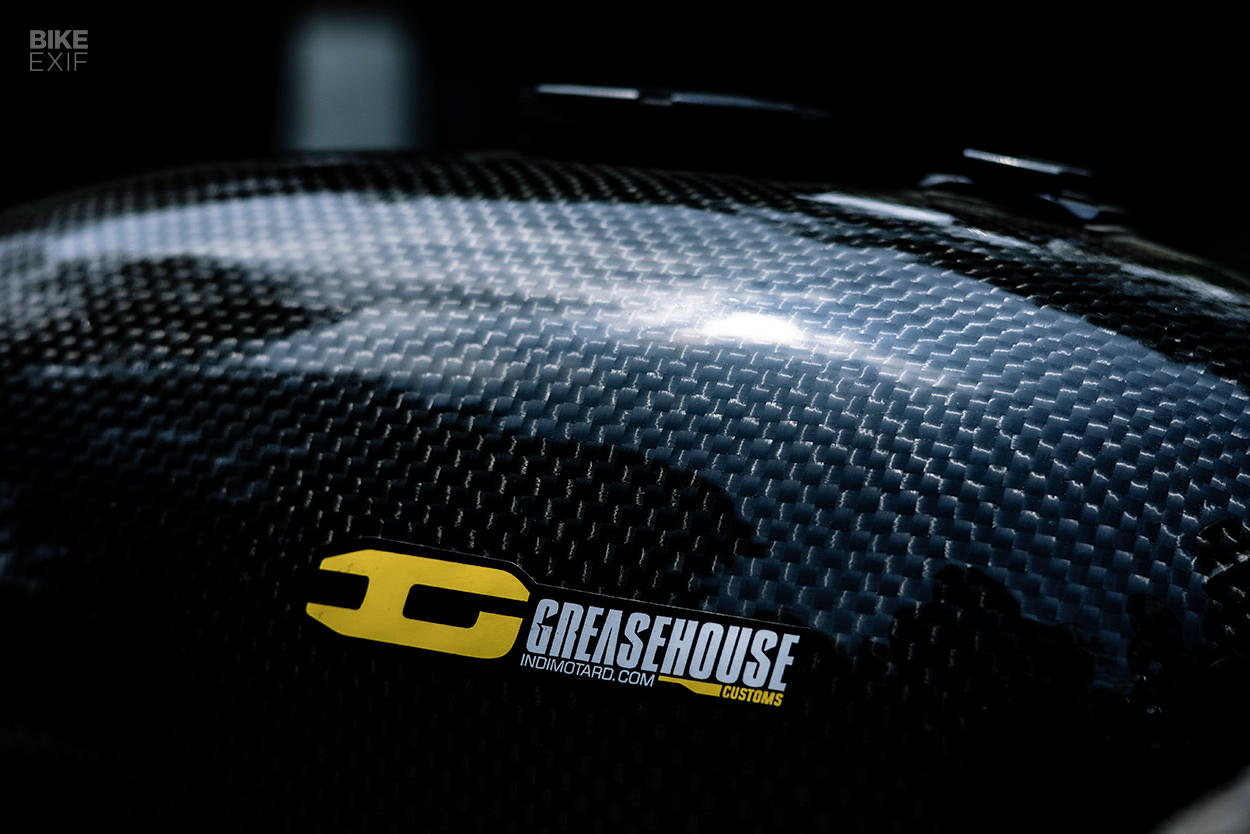 But if you’re worried that this build is all for show, rest assured—it’s not. Greasehouse have already competed with it, snagging third place at the Vroom drag race in Bangalore, with racer Lani Zena Fernandez behind the bars. Not too shabby for a first outing. 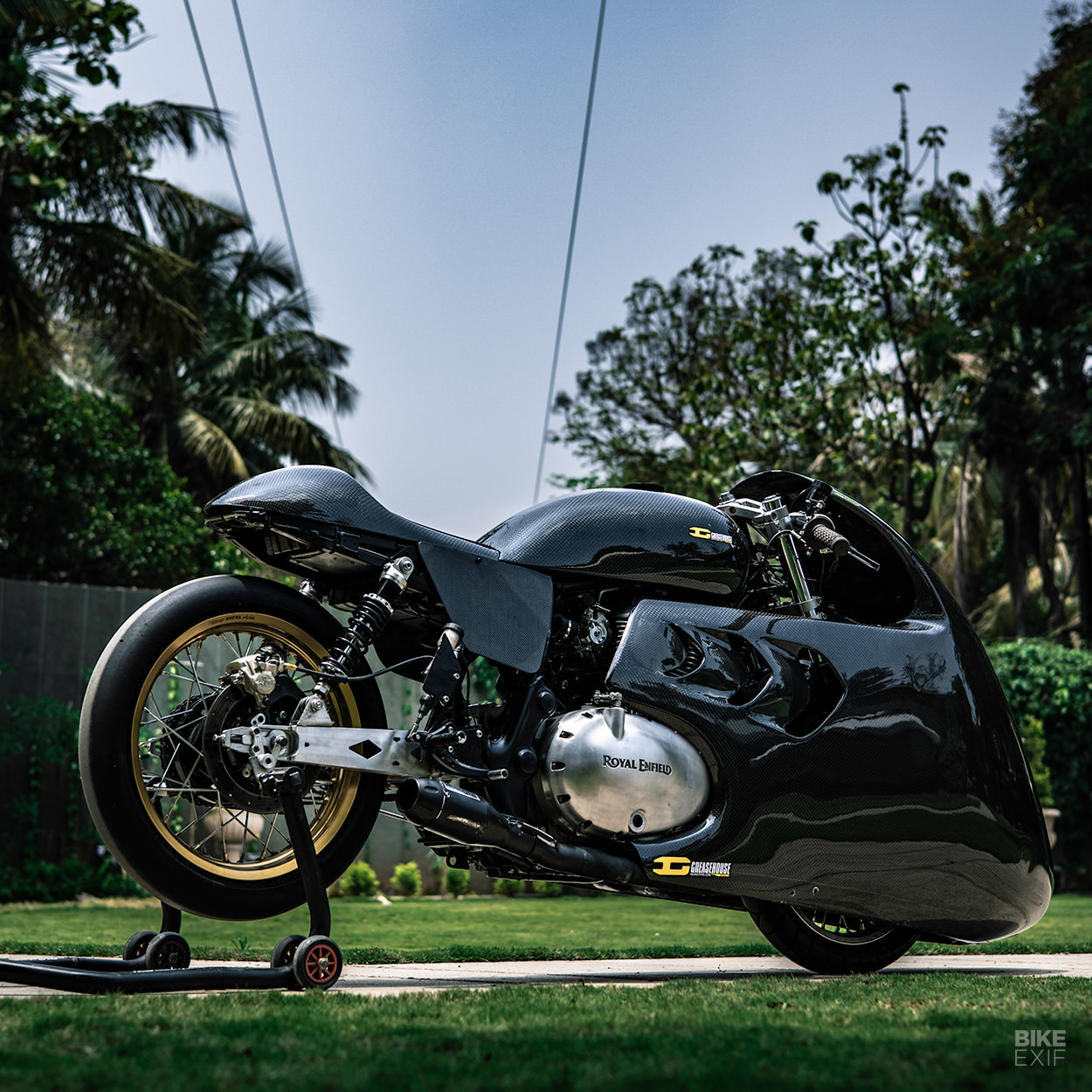