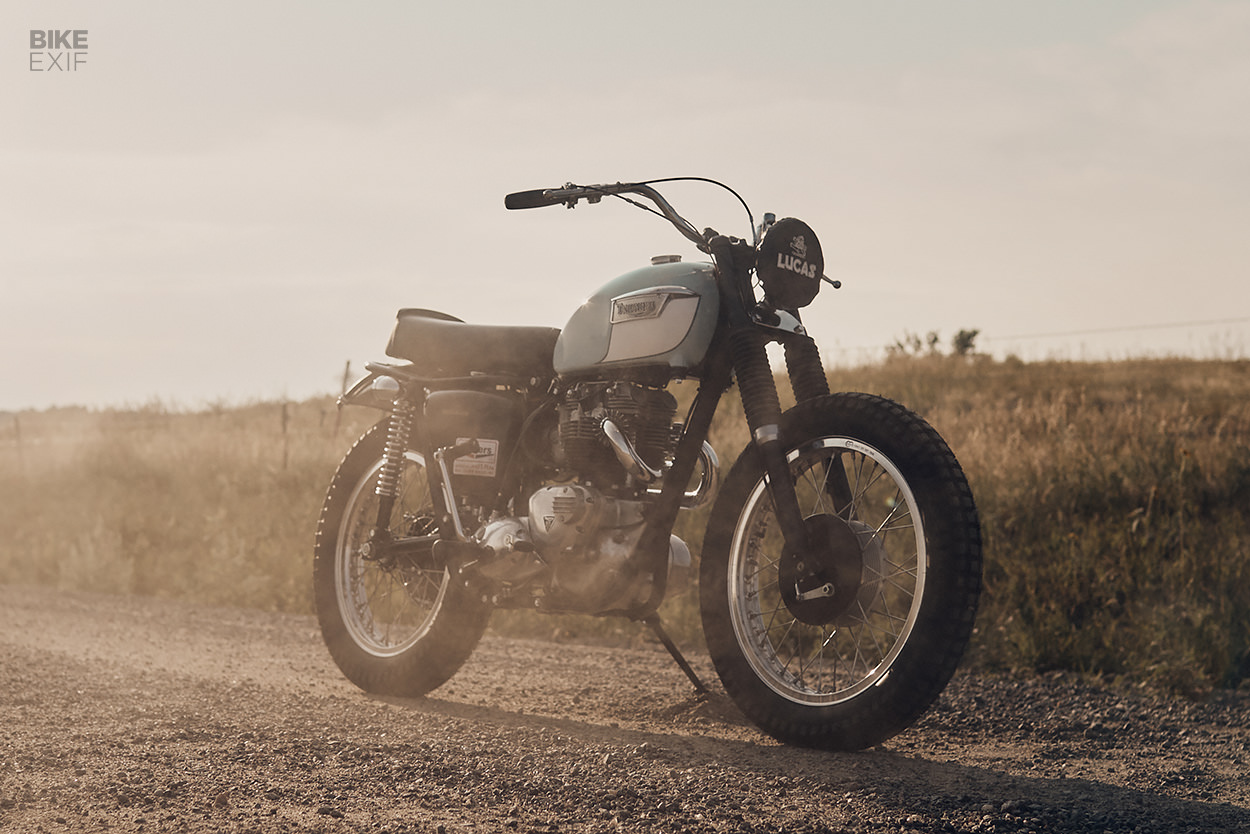 Hayden Roberts once quipped that when he moved from England to California in the early 2000s, it was “about 40 years too late.” His work testifies to that: as Hello Engine, he builds neat vintage Triumphs that look like they were transplanted straight from the 60s. And like many of the desert sleds from that golden age, his Triumphs are never stock under the hood.

His latest project is this 1960-something Triumph TR6. And we use that designation loosely, because, as usual, Hayden pieced it together from a plethora of rescued, salvaged and restored parts. 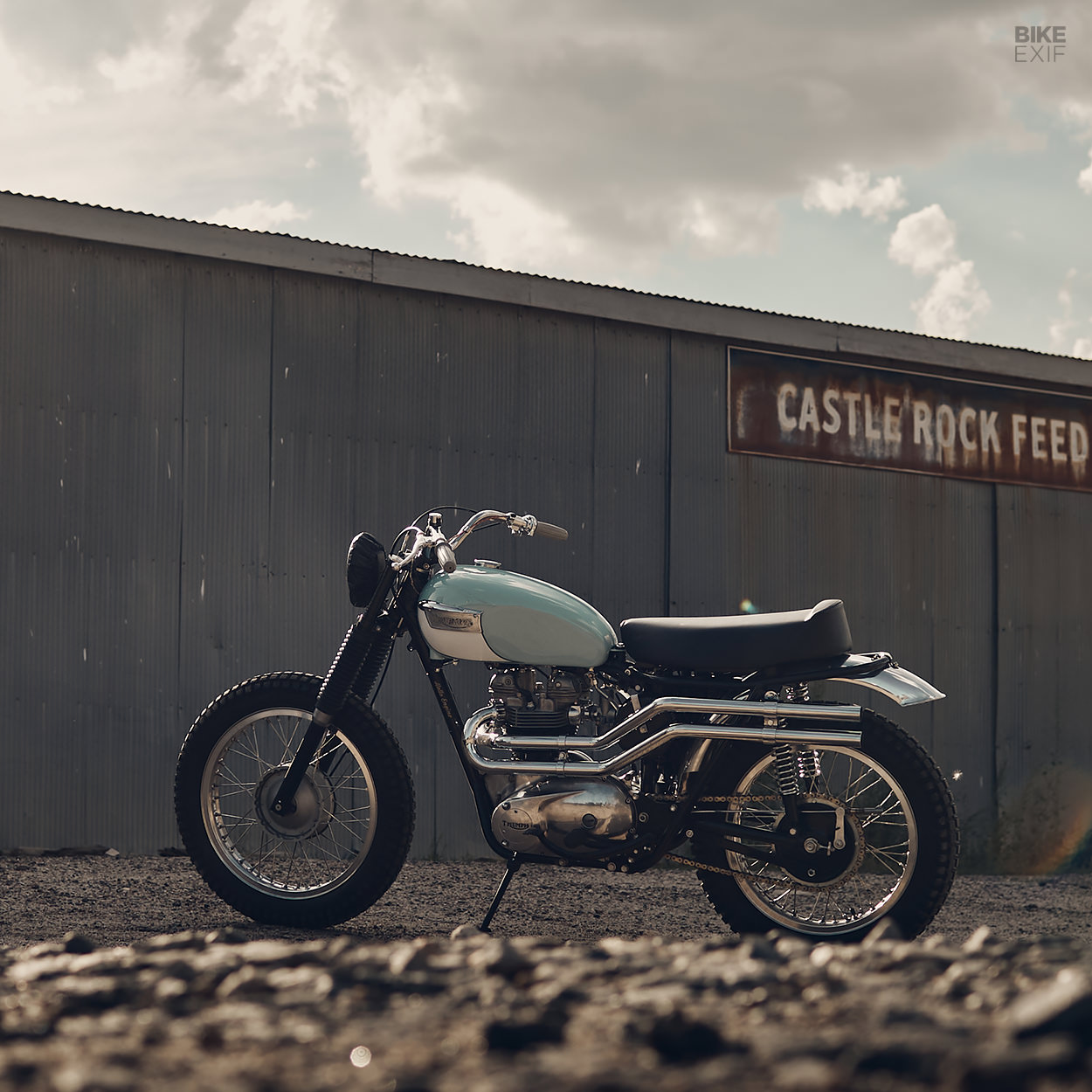 The client for this project was Ben Giese—the creative director and editor-in-chief of the motorcycle magazine Meta. Ben is used to having a hand on the wheel when it comes to creative projects, but here, he took a small step back to let Hayden work his magic.

“I’ve always been in love with the shape and design of vintage Triumphs,” Ben tells us. “I love how clean and simple they are. I’ve always wanted one, and with my background in riding dirt I just had to make it a desert sled.” 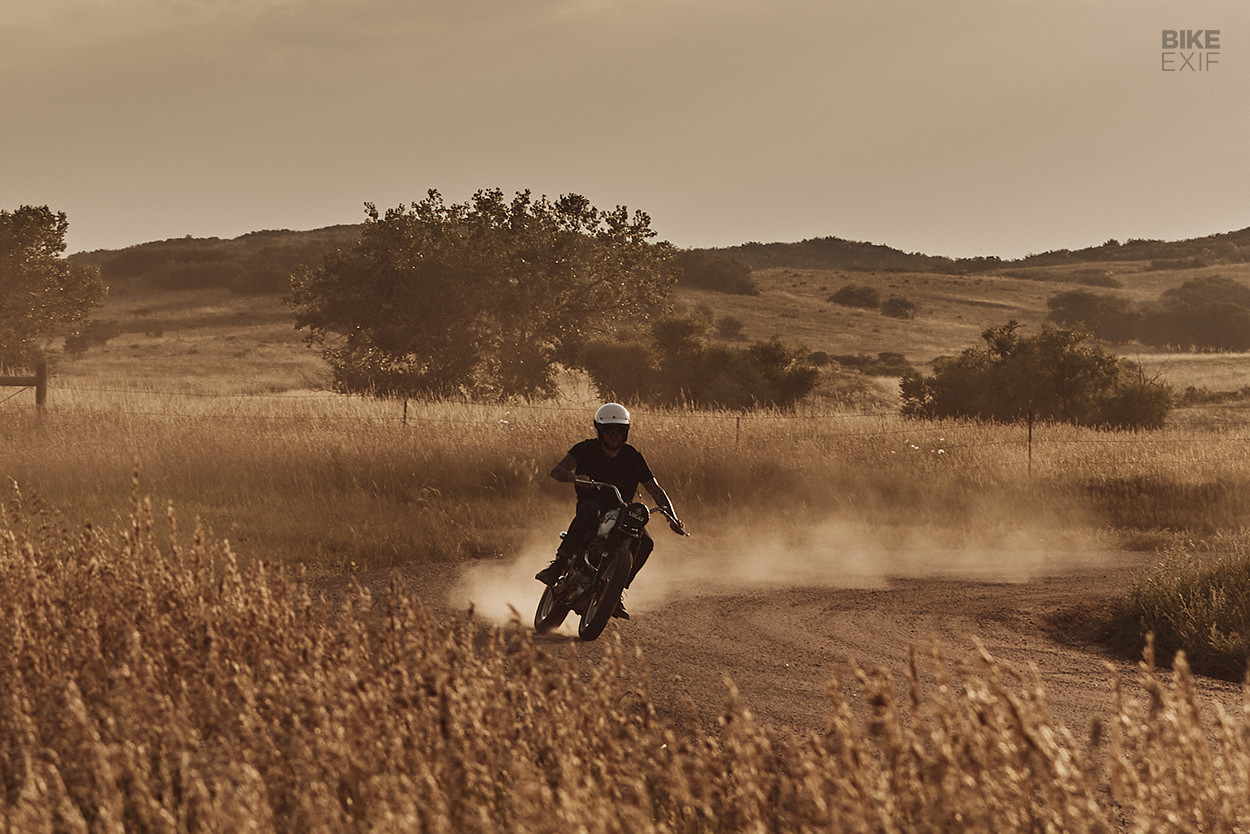 “I sent Hayden a few photos of old desert sleds that Steve McQueen used to race for inspiration on the build—but those old race bikes were pretty ragged and I wanted something a bit more clean and sophisticated. I gave him some simple directions like the tank color, frame color, exhaust style and an overall ‘make it minimal,’ and let him run with the rest.”

“Ben was familiar with the bikes I put together and just let me be,” says Hayden. “Can’t complain about that.” 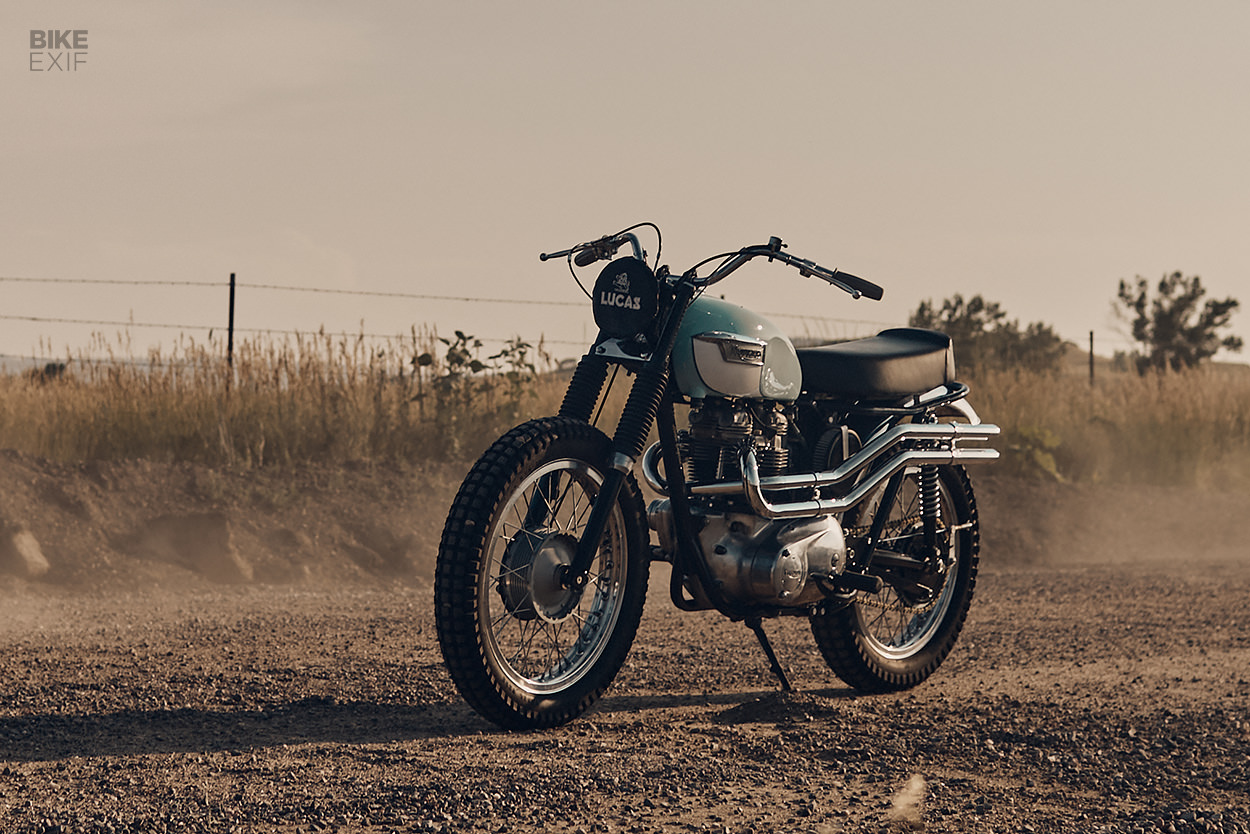 A derelict 1964 Bonneville frame and engine cases formed the basis of the project. “I pick them up off Craigslist ads and swap meets,” Hayden tells us. “I’ve even had them dropped on my doorstep like turd-filled paper bags—I grab ’em where I can.”

The crank was stripped and balanced, and the motor was treated to a set of Jomo 15 cams from Megacycle. Hayden also installed a single carb head from a TR6, along with Kibblewhite Black Diamond valves. The carb is a new 30 mm Amal Premier, fed by an open K&N filter via an ‘air box’ of his own making. 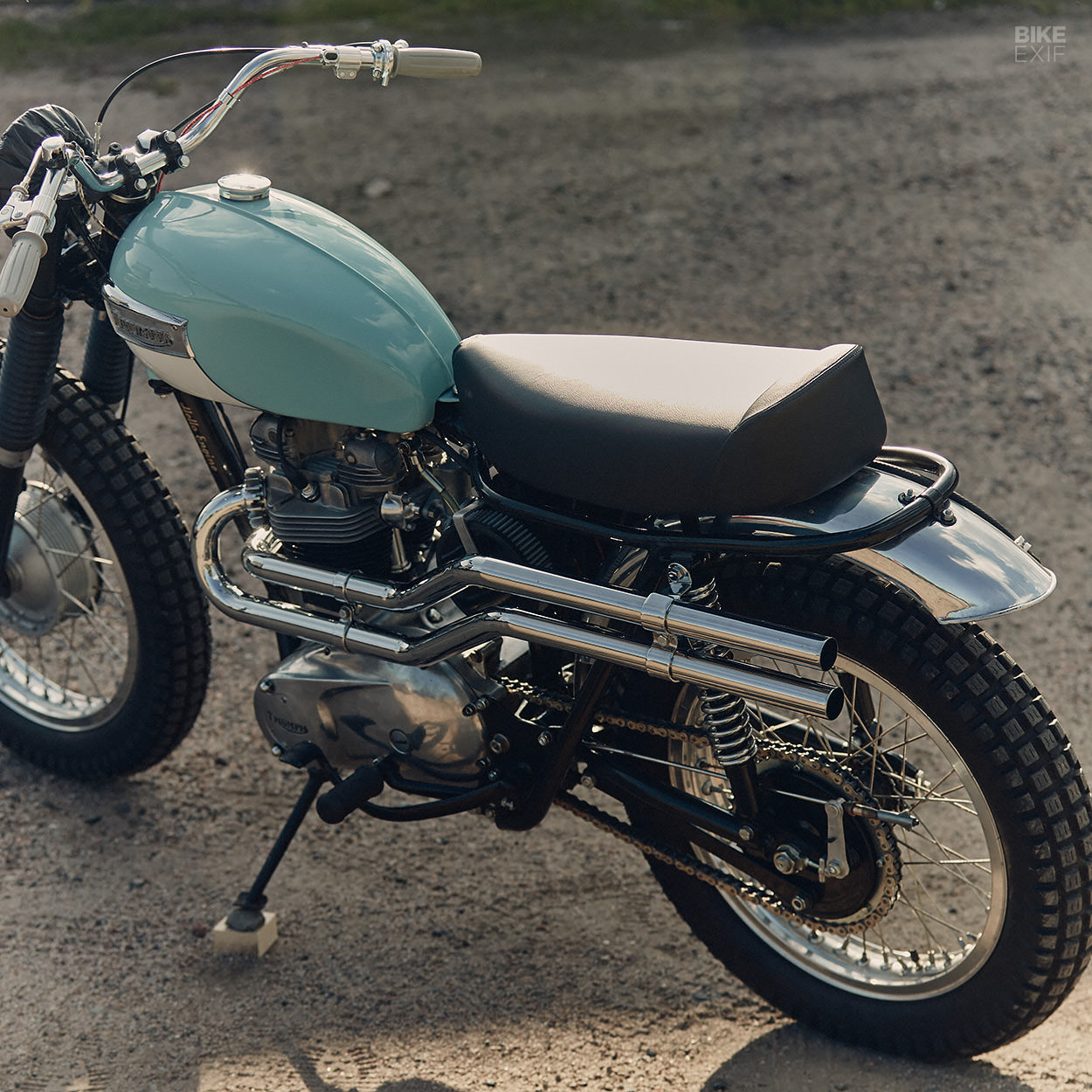 “1964 was pretty early in the run of unit motors,” he adds, “so we made various updates much like Triumph did on the later motors: oil pump, pickup, final drive gear, O-ring head, modified rocker spindles. The kinda things guys argue over with unabashed conviction on classic bike forums.”

The high twin pipes are new reproduction numbers that are styled after classic desert sled exhausts. They’re usually made in small batches, so Hayden buys a few sets at a time to keep on hand, since they “have a real savage rasp to them.” 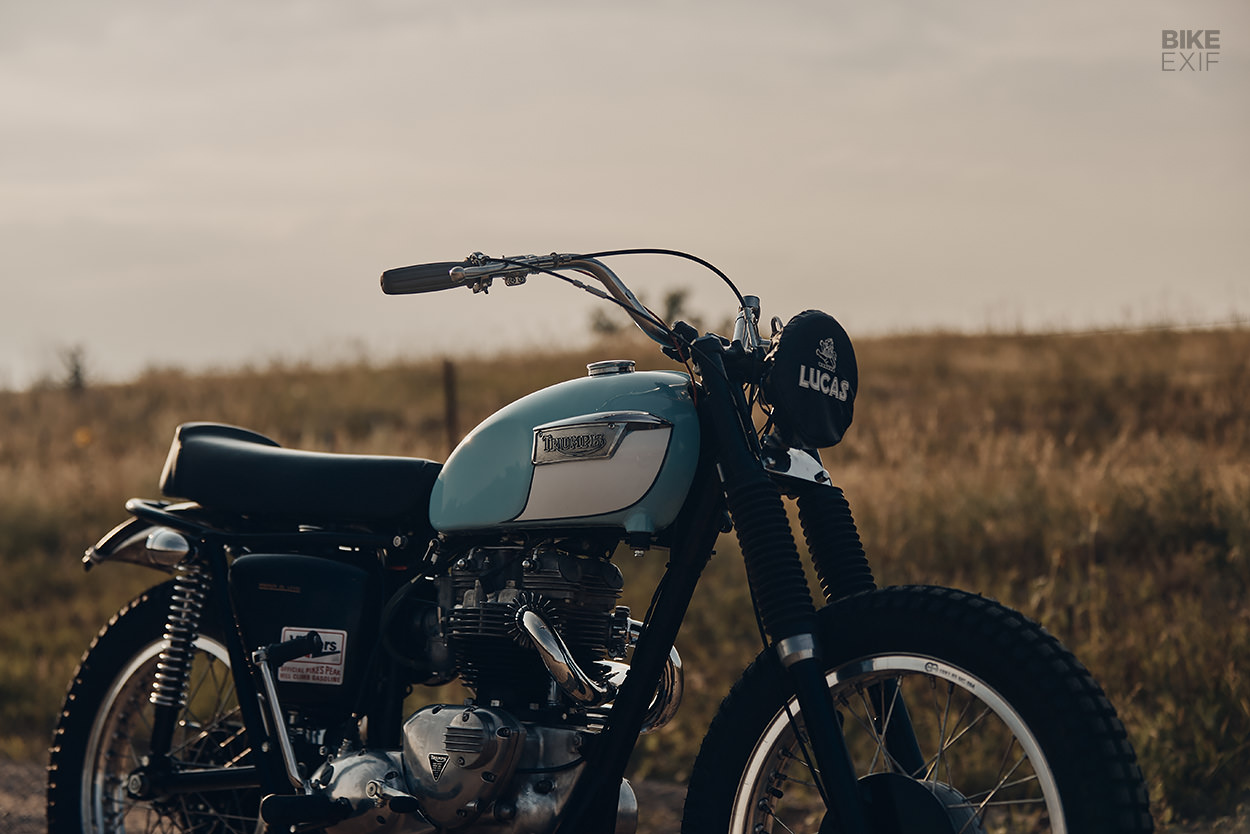 Moving to the chassis, Hayden added a set of ‘Competition’ forks from a later model Triumph, rebuilt with bits pulled from his own stash. The rear shocks are from NJB shocks in the UK.

For the wheels, a set of Jones aluminum rims were laced up with Buchanan’s stainless steel spokes, and wrapped in classic trials rubber. 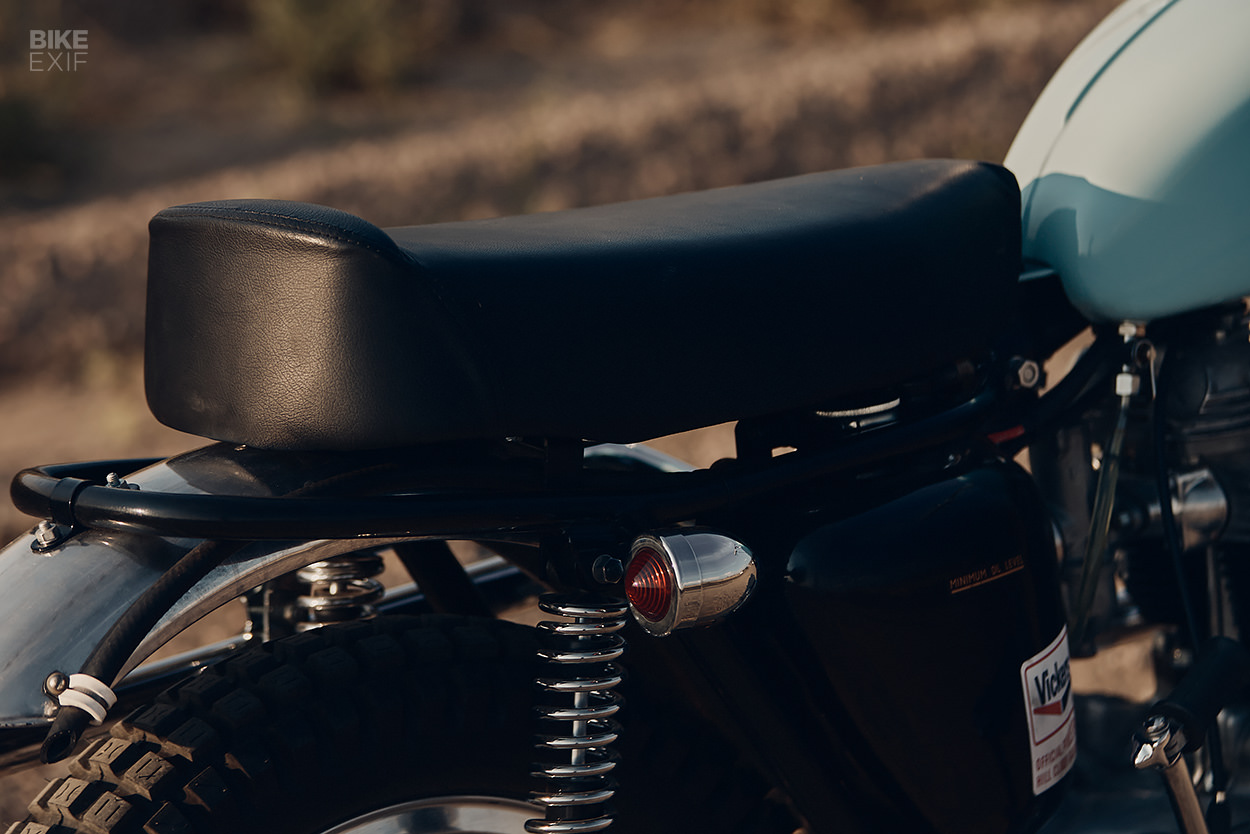 The Triumph’s bodywork is a mix of old and new. The ‘slimline’ tank is from 1969 Bonneville, but needed a fair amount of repair work (and a pressure test) before it could be mounted up. Still, Hayden tells us it’s better than most replica tanks, which often weigh a lot more than their vintage counterparts.

The Bates-style seat is brand new—a signature Hello Engine part that uses leather wrapped over injection-molded foam. And the rear fender’s an aluminum part made by a supplier in Northern California, but trimmed by Hayden to fit this bike. 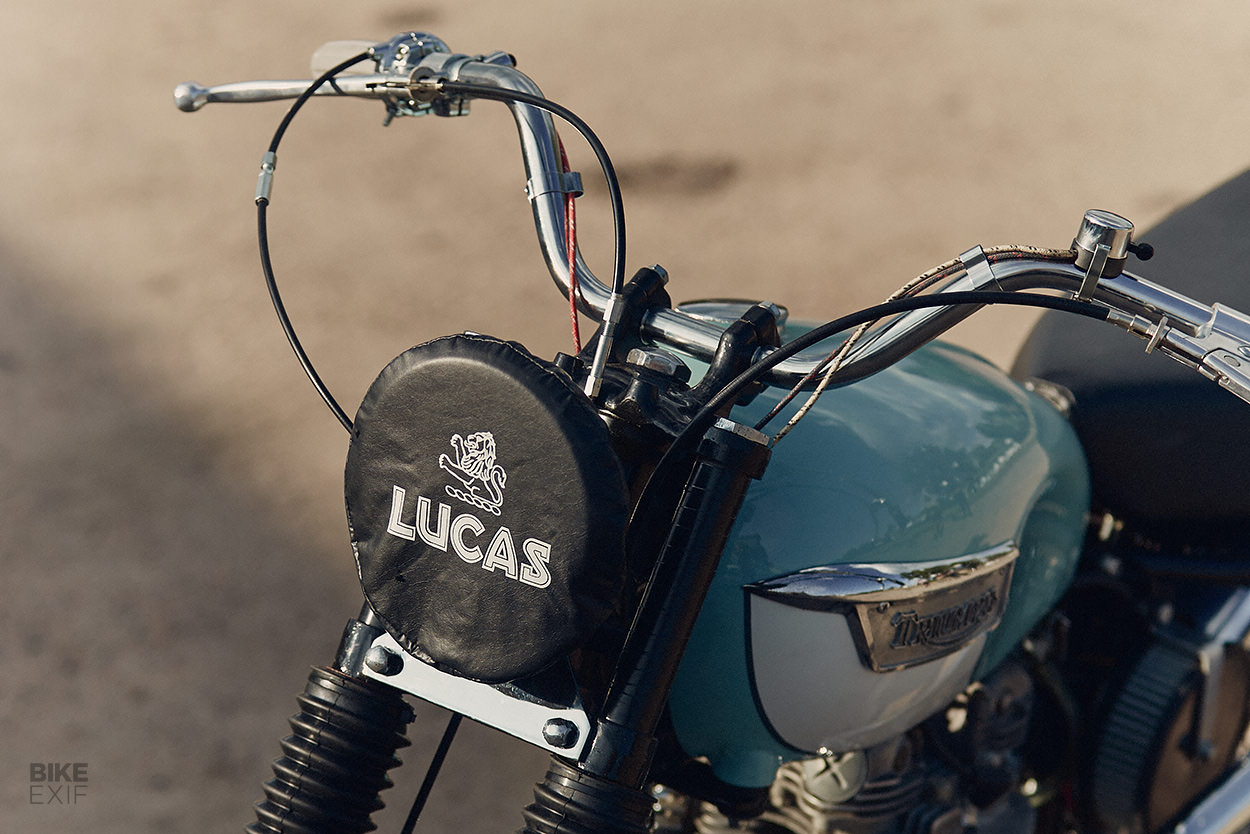 Up top are a set of classic tracker bars with fresh grips, and out front is a Hella headlight, complete with a classic Lucas cover.

The original wiring’s all made way for modern solid state parts, and there’s no battery. “Don’t get me wrong,” says Hayden, “I love the mechanics of the original points ignition system—but timing them is a skill I’ll save you the very tedious trouble of learning.” 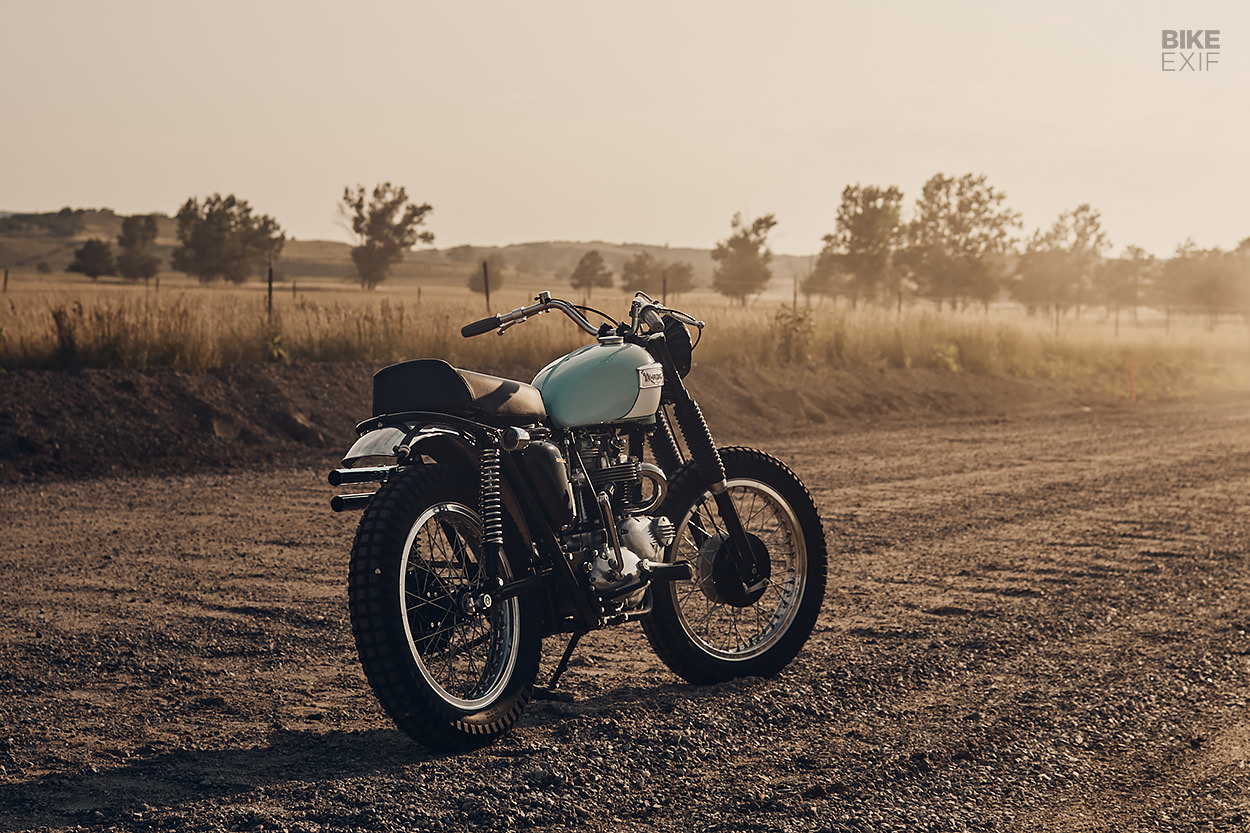 Hayden also replaced the steel controls with aluminum parts, and shaved some tabs off the frame. All in all, he estimates that this Triumph weighs around 100 pounds less than stock.

When it came to paint, Ben originally wanted an all-black livery, like all of his other bikes. But Hayden insisted that the Triumph needed a splash of color—and Ben relented. 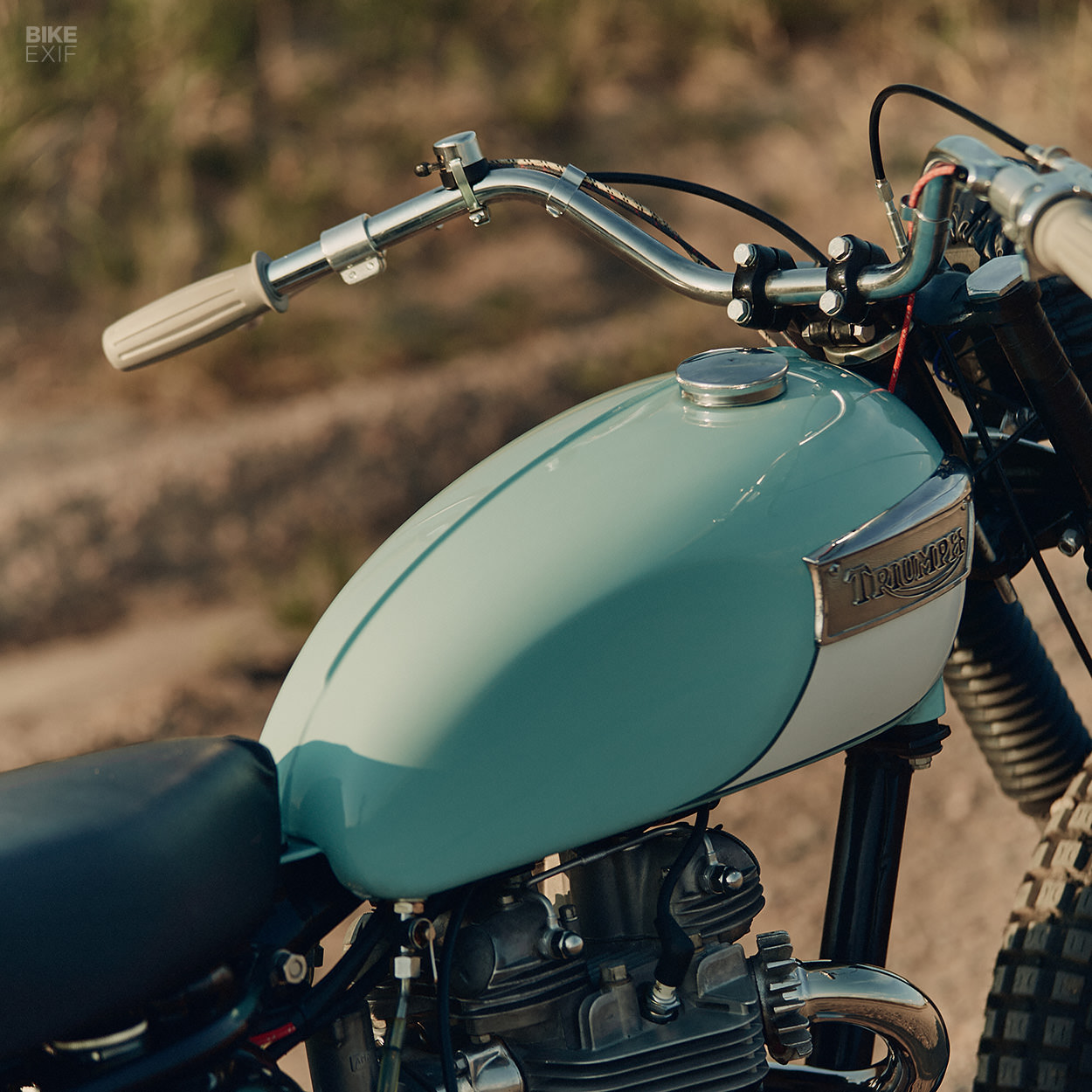 “In the end I’m super happy with the soft blue I chose,” he says. “Hayden had the tank custom painted for me, and he had the frame, swingarm and fork lowers painted black to make me happy, while leaving just enough chrome and raw metal to keep that beautiful classic 60s aesthetic.”

“Really I just wanted to make something very simple looking,” Hayden adds. “Simple to maintain and goes like the clappers. I think Colin Chapman said that…” 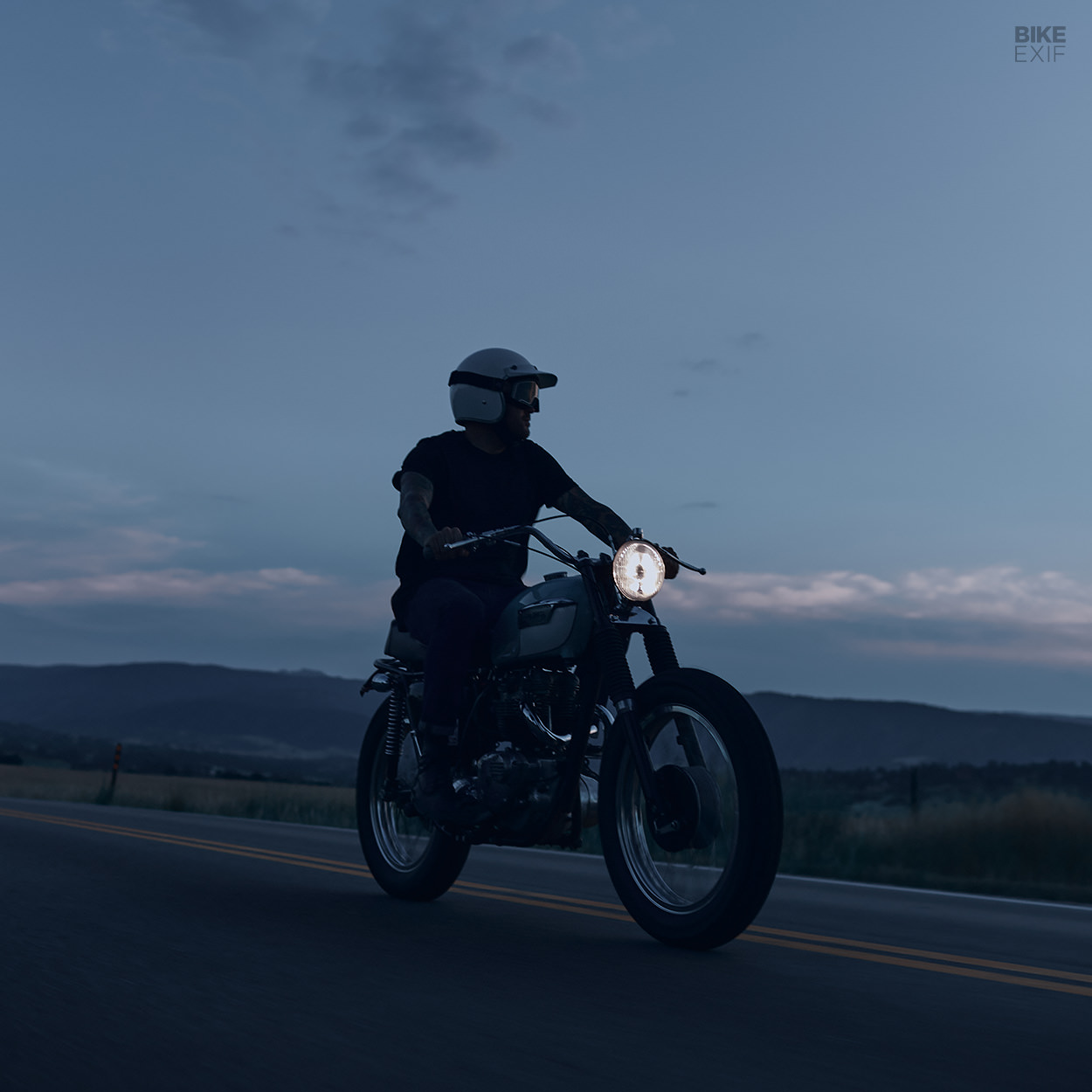