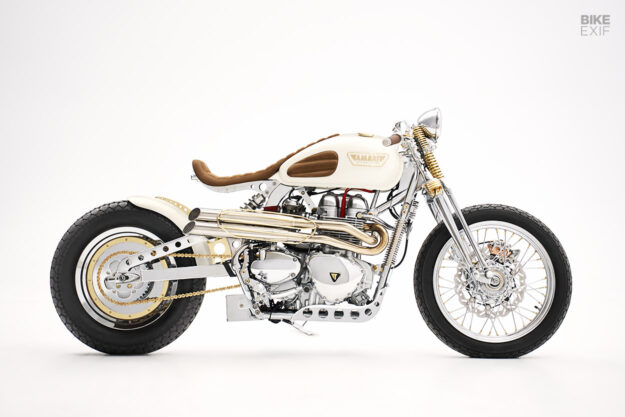 Even after more than 120 custom builds, Tamarit Motorcycles isn’t showing any signs of slowing down. In their continued search for motorcycling elegance, the Spanish custom shop has based their latest work on a carbureted 2004 Triumph Bonneville. Named ‘Circe’ after the minor goddess from Greek mythology, the venerable Bonnie has been elevated with hints of Baroque-inspired design.

With such an extensive back catalog, it’s tempting to tread familiar ground. But Tamarit deliberately eschewed trends with this bobber, aiming to create something “classic, beautiful and daring.” 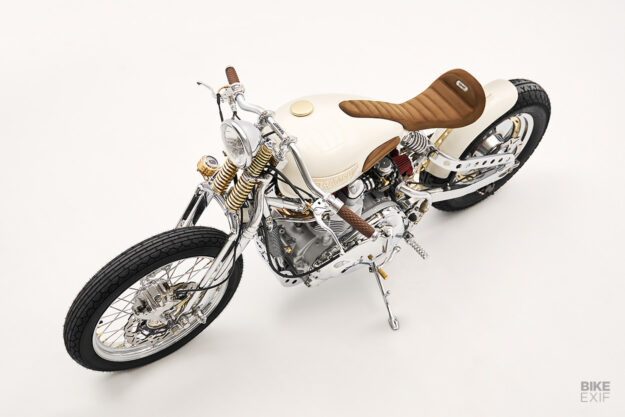 The most radical changes are the Bonneville’s front and back ends. Up front is a gleaming set of chromed springer forks, with a Bates-style headlight sitting between its brass-plated springs. This combination of chrome and brass is a continuous theme, extending even to the wheels and brakes.

Behind the forks are a set of inverted board-track style handlebars, equipped with Biltwell Inc. grips, polished levers, and Motogadget switches and bar-end turn signals. A tiny Motogadget speedo is mounted low on the right side of the springer, like a well-fitted piece of jewelry. 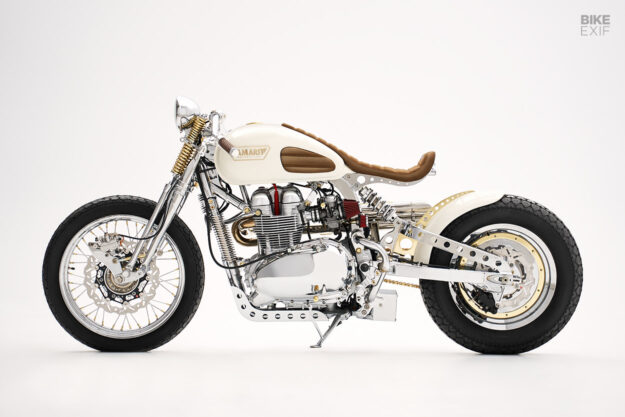 Not much of the original bike remains in the rear portion. The new subframe is cantilevered from the main frame, while the swingarm has been converted to a mono-shock system. Tamarit have used this rear suspension setup on past builds, and it’s great to see that they are still developing the technology.

Not only is it braced and polished, but the swingarm has been extended by about 6” too. A fiberglass rear fender is attached to the swingarm on a brass-plated bracket. The tires are classic Continental treads; they’re spooned onto a narrower-than-stock wheel up front, and a solid disc wheel at the back. 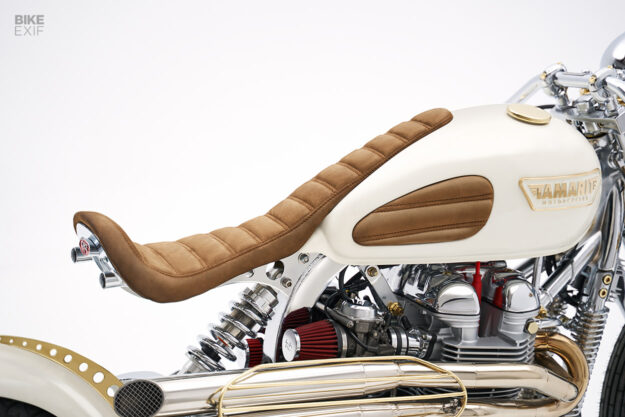 The crew wanted to imbue a sense of movement throughout the bike, where one piece flows fluidly into the next. This is most evident in the tank-seat design, where the leather cascades down the tank and into the beautifully sculpted saddle. The drillium in the seat’s subframe is echoed in parts like the swingarm and rear fender brace, adding another level of cohesion. 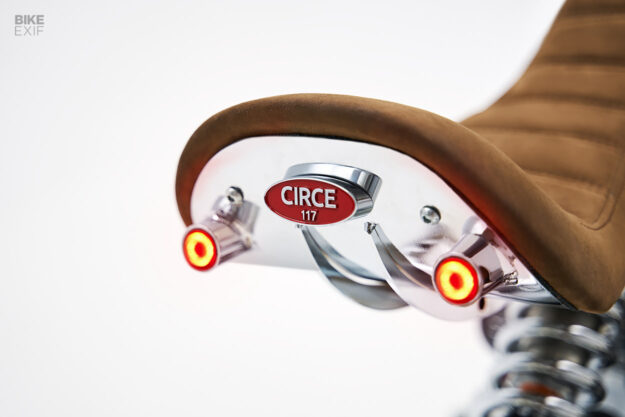 The back end of the seat pan features a custom-made ‘Circe’ emblem, and a pair of integrated LED taillights. Power is supplied by a small battery hidden in a handmade box under the swingarm.

The bike was rewired from scratch, with everything running smoothly through a Motogadget mo.unit blue control box, complete with a smartphone app. There’s no key—instead, an RFID lock is hidden under the front of the seat, activated by way of a fob. 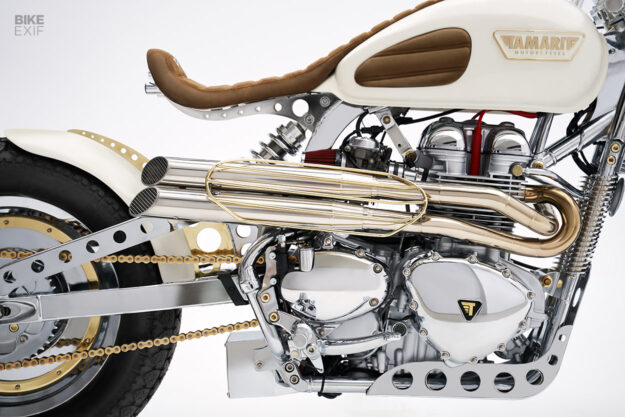 The engine was blasted for a super clean look, and the cases were polished to within an inch of their lives. K&N air filters help the engine breathe easy, and, to improve it even further, Tamarit made a custom, high-mounted exhaust.

A brass-plated grill protects the rider’s right leg from the slash cut mufflers. After a heat cycle, the stainless steel headers have a golden sheen that matches the rest of the bike perfectly. 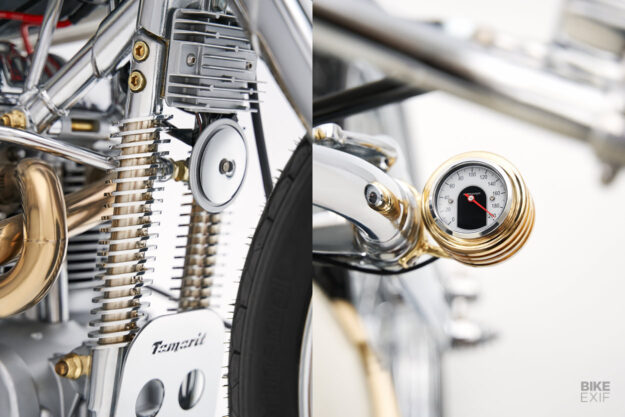 The Bonneville also wears new foot pegs, and a sump guard from Tamarit’s own catalog. Sitting just above that is one of our favorite features: the frame’s down tubes have been converted into an oil cooler, with fins that mimic the springs on the front end.

There are countless little considerations like this all over the bike. Tamarit were right to photograph it like an art piece—you could sit and pick up on new details for hours on end. 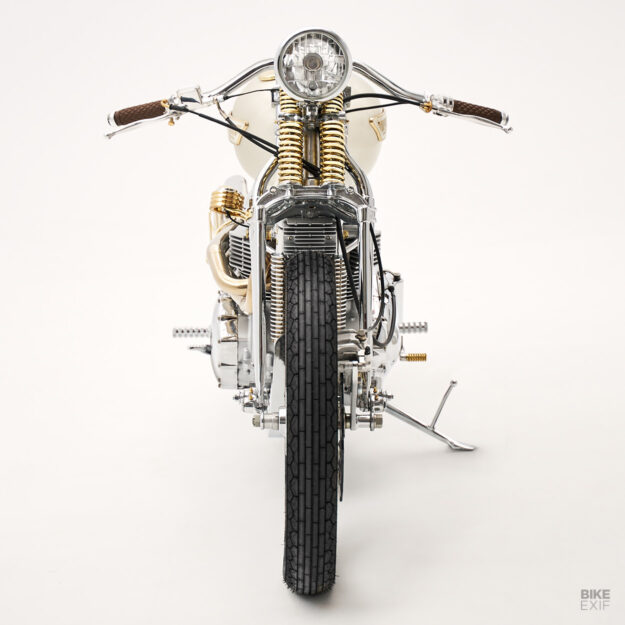 Tamarit didn’t build Circe for any particular client. Instead, they’re partnering with the prestigious French auction house, Artcurial, to sell it.

If you’re looking for a piece of motorcycle art from one of Europe’s most prolific custom houses, Circe will be auctioned at next year’s Salon Retromobile show, in Paris. After the success of Jade, the last Tamarit bike to be auctioned by Artcurial, we can’t wait to see how the public reacts to this one. 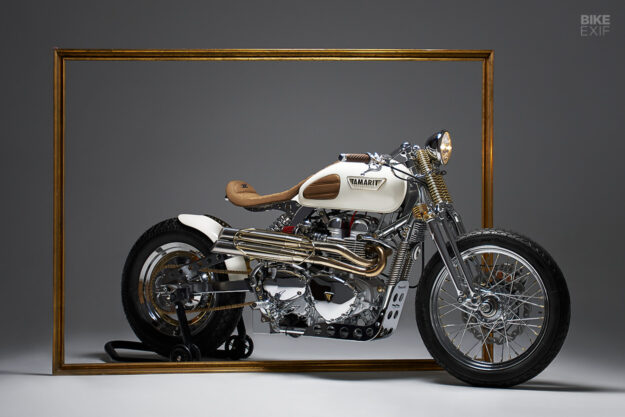