Escape the Crowd in your UTV

My wife, Jackie and I love the flowers, and there were plenty of them to see, along with mines strewn throughout the ride.

There were several trips up some canyons that Lance knew were only a mile or two long, but I am all for taking some of those trails. They can be, and were, some of the most challenging terrains!  This is always fun to experience in our more than capable UTV’s. It is the It’s one of the wettest springs in Utah’s history! A record amount of snow up at the ski resorts, including Snowbird resort having over 700 inches. This translates into more than 58’ of snow in a single season!

I have been riding and hunting the Wasatch Range Mountains all my life now, and usually by the 1st of June, I can start getting over the top of the large mountains on my Polaris UTV – not this year.

Our Facebook groups have been posting pictures that have them stuck in the snowbanks and the snowdrifts that have been impassable up to this point. I have been there and done that. After already taking a very muddy trip to Eureka earlier this year, I realized how much work it was to get the UTV back to normal, after cleaning it up for 6 hours. I am not ready to take another ride in the mud just to be riding.

We are lucky to have met our good friends, Lance and Shannon, who own a side by side and love going on day rides as we do. Lance works for the Forest Service and knows Utah trails better than anyone I have ever met. So, Lance suggested that we go on our next trail ride out west of the Pony Express trail near the town of Vernon. He had ridden over there before and said there were some incredible scenery and plenty of roads.

Again, Lance, with his knowledge of the trails and teaching me how to use a Garmin GPS Montana series, mapped out the 70-mile long trail, along with Google maps of where we would be staging. He is a great asset to any ride, especially in unfamiliar areas.

The plan was to meet at the Flying J truck stop, and we would caravan to the staging area together. There would be 4 UTV’s going and seven of us riding and driving. It was an unusually cool morning for the second day of summer – highs would be in the mid-’60s, with no rain and plenty of sunshine. This is actually some of the best riding weather.

Our drivers on this day included Lance & Shannon on Wildcat trail 700, Bill Oakden in a Polaris XP1000 rock crawler edition, Rhett Gardiner and his work friend, KC in a Polaris RZR 800-S. (Rhett got the Ok from his wife for a quick ride, leaving his 8 week- old son home for the day) plus, Jackie and I on the Polaris XPT.

We got to the staging area and had only seen one other person getting ready to ride. We unloaded and got our stuff together to take off and have some fun and adventure-new riding for me. It is only 65 miles from my house, but I think part of the reason this is not as popular is because when we say west desert one tends to think about sagebrush and flat land with nothing out there except military bases.

It did not take long before we were into mountains, full of some of the greenest scenery you could ever imagine, with every color of wildflowers – white, purple, red, pink, against the blue skies and green. It was a complete surprise! There were flowing streams in many directions, along with numerous water crossings, but not such muddy conditions that we were worried at all. trails where your UTV gets lost in the low hanging trees and shrubs, and once in a while a brush pops you in the face to remind you that your UTV is an open cockpit.

We stopped for lunch about halfway through our ride, and this is what these rides are all about – to experience things in common and get to know new people who enjoy the same things you do. After lunch, we hiked up a small trail (it might be small, but not so easy going when you get up there in age) to get to the entrance of a mine, and we walked into it for a little way. But soon we were pulling our cell phones out just for the flashlight to see what was in front of us. The damp smell immediately made us realize these miners were in a whole different world than you and I are in our work environment. One of the coolest things I learned about the mines, Lance pointed out is the crystal vane which is about 3” tall. This is where they would follow them down the mine, kind of like a map, hoping for silver and gold at the end of a rainbow. 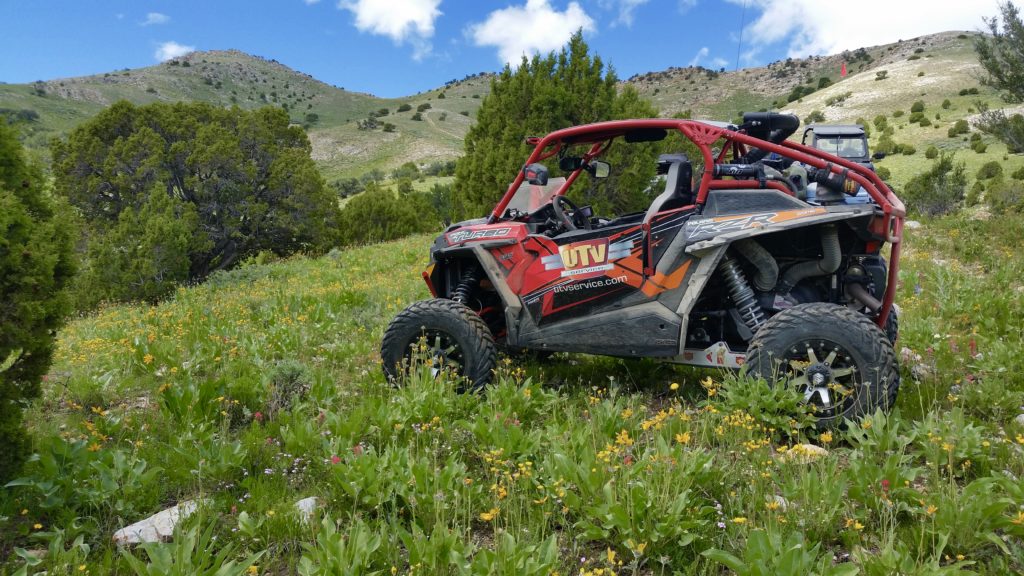 Polaris XPT in the wildflowers 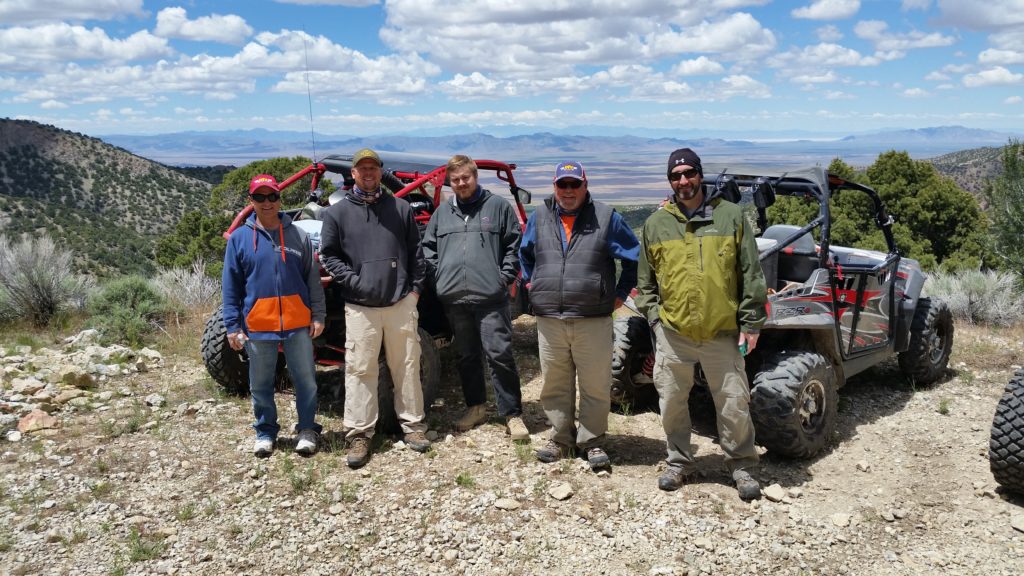 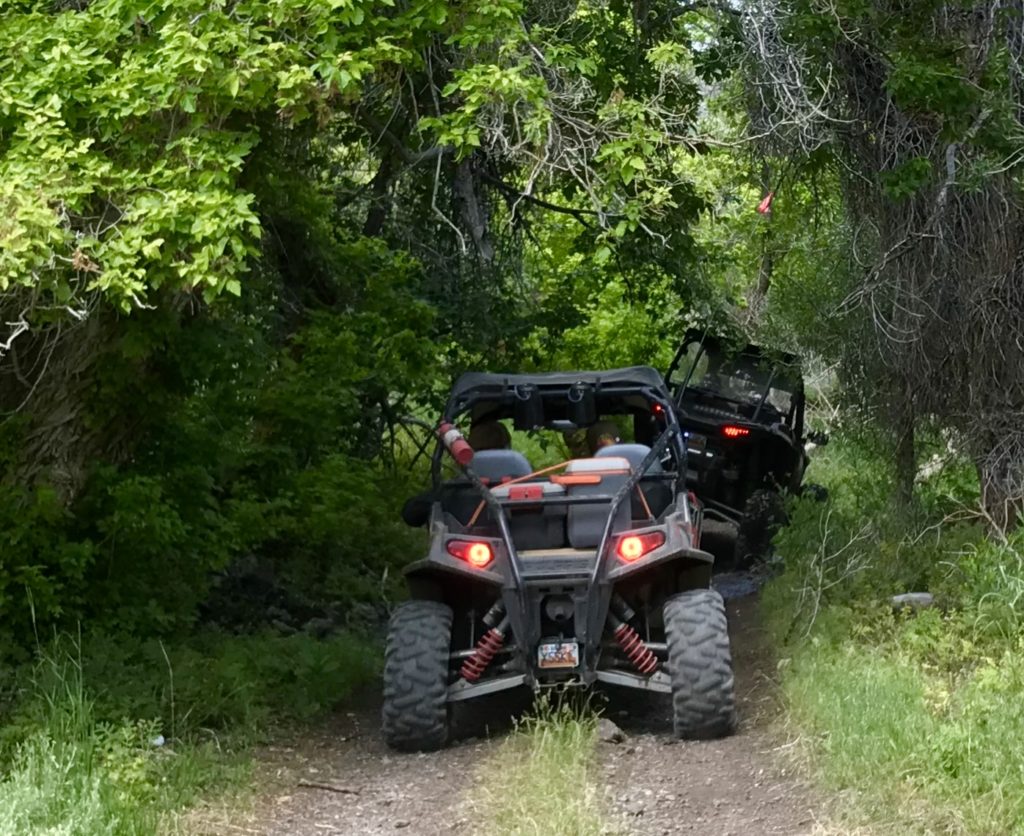 UTV’s disappearing in the green woods

Rhett and Casey headed the quick way back to their truck to make sure to get home in a good time so that maybe his wife will let him have another play day soon!

After we started our long loopback, it would have been easy to get turned around and get lost in the vast land and mountains, but Jackie and I are learning, thanks for the help from Lance on how to read the GPS. We were following the designated route that was uploaded to the GPS – I think we are familiar enough with the Garmin Montana that we could have made it back to the truck if we were riding alone. This is a big step in technology for us!

The last two trips we have taken in our Polaris UTV, there were times when we were a little bit lost and a GPS will get you back to your starting point.

With the number of miles that you go in this modern day UTV’s, you can easily be 40 miles out and get lost in a hurry.

As we are heading back, we run into multiple ghost towns that once were homes to people long ago, and it is quite surprising to think about what they did up in these areas, besides just mine. We took a different route back to our trucks and kept seeing the beautiful country in what I thought was nothing but barren land. There is a great forest with deer, including a nice buck laying down in the grass. I think he just wanted us to leave so that he could go back to a nice nap.

After getting back to our trucks and loading up around 5:00 P.M., Lance, and Shannon invited us to a favorite food spot in Tooele, Utah, to get a beer and food. It is called the Bonneville Brewery, and it is a very cool place with pictures of Bonneville Salt Flat racers strewn throughout the two-story building – hence the name. If you are a fan of beer and food, along with great memorabilia from the Salt Flats be sure to stop in for a quick one. The bottom floor is for the family, and the top floor is the bar.

After a 12- hour day we were dead tired, and it is all we can do just to unload and crash on the couch!

I think about how my love for this sport and making a business involved in the UTV service business has opened the doors for meeting the kinds of people that we did not know until the last few years. Now they are becoming friends who share our love of riding and getting out and enjoying areas we did not even know existed.

It surprises me all the time that many people ride around the Wasatch front and some beautiful areas that have gotten overrun, and what I call an absolute zoo – if they travel just a little bit farther and ride their UTV out 20 miles or so, they probably will be the only riders in many of these areas. This is what I want to be doing when I am riding in the mountains – just enjoying the moments of some peace and quiet, along with all the scenery we naturally have in this state.

I want to thank everyone who made this possible and let’s keep getting together to explore the great outdoors and all Utah has to offer.

Until we ride again.

The post Escape the Crowd in your UTV appeared first on UTV ATV Repair.