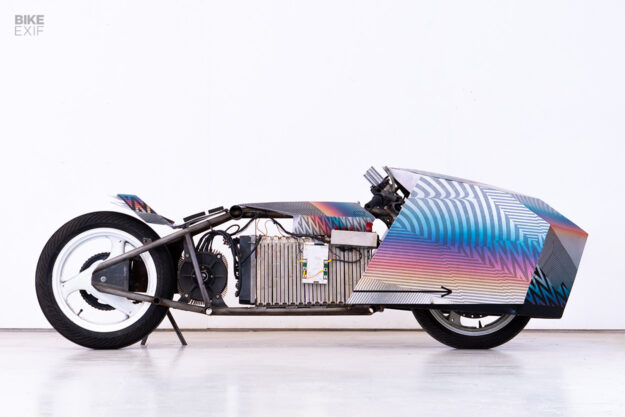 Bizarro Corp.’s online store has a T-shirt that reads “café racer is dead.” It’s a little rich coming from a custom workshop with a number of café racers in their portfolio. Then again, the Spanish crew isn’t exactly known for being conventional.

If you need proof, we’d like to present ‘Esputnik II’: an electric drag racing ‘bitsa’ that doubles up as a canvas for kinetic art. Built with Zero and Suzuki parts, and painted by the contemporary artist Felipe Pantone, it’s the perfect example of Bizarro’s unhinged creativity. And it was one of the stars of the recent Glemseck 101 racing festival. 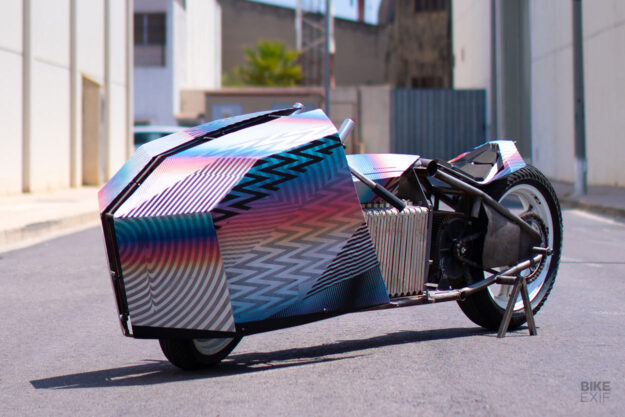 It’s an evolution of ‘Estputnik I’—a bike that Bizarro built three years ago, when they decided to shift their focus to electric motorcycles. They started by pulling the brushless electric motor from a Zero DSR, good for 157 Nm of torque in stock guise. That was shoved into a scratch-built steel chassis, alongside a salvaged electric car battery.

Bizarro took Esputnik I to the Wheels and Waves event that year, and finished fourth in the fabled Punk’s Peak race. Then a global pandemic hit, and the team had time on their hands to put some more thought—and elbow grease—into their creation. 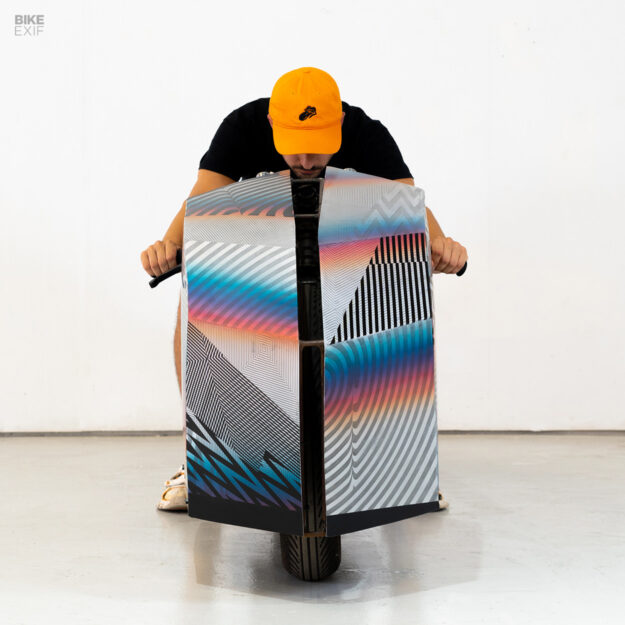 Armed with a digital render of what the Esputnik II should look like, Bizarro stripped the first iteration’s haphazard bodywork off and started over. Work on the front end began with a wireframe, over which the crew hand-formed a new aluminum fairing. It’s vaguely reminiscent of old-style dustbin fairings, just much less curvaceous.

A sleek cover sits atop the frame backbone where you’d expect to find a fuel tank. Behind that is a slim tail unit that echoes modern hyper-bikes like the Kawasaki Ninja H2.

Esputnik’s original chassis has gone largely unchanged beneath the new bodywork. It’s a stretched-out steel affair with a rigid rear end, built specifically for going fast in a straight line. A crude chain guard covers the left side of the rear triangle, and the foot pegs are just short bits of tubing welded directly to the frame.

Propping up the bike are the forks and wheels from a 2000-model Suzuki GS500. There’s only one brake—a Brembo unit mounted up front—but there’s also a regenerative engine braking system that helps to slow the bike down. 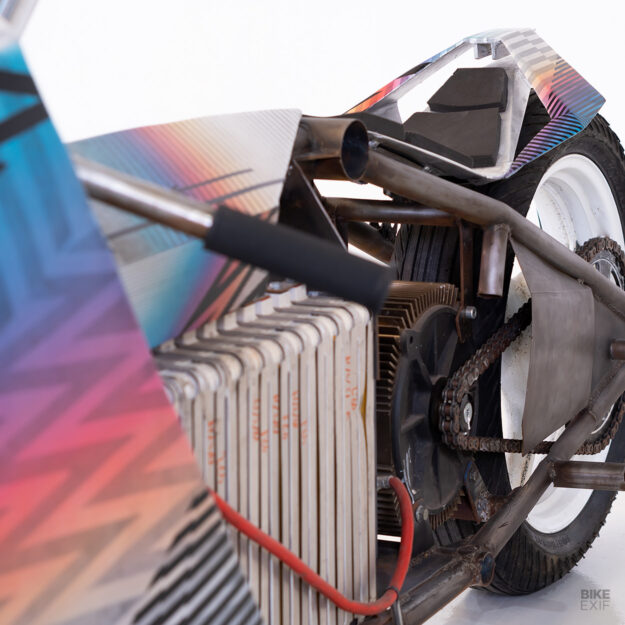 Bizarro fine-tuned the drivetrain on this version of Esputnik too. The original motor is still in play, but the battery’s been swapped out for a new one from Zero. And the gearing’s been fettled to optimize the bike for sprint races.

The changes have brought the top speed down from 195 km/h to 165 km/h. But the trade-off is that Esputnik does zero to 60 in 3.1 seconds—matching the Zero SR/S and Yamaha R1. 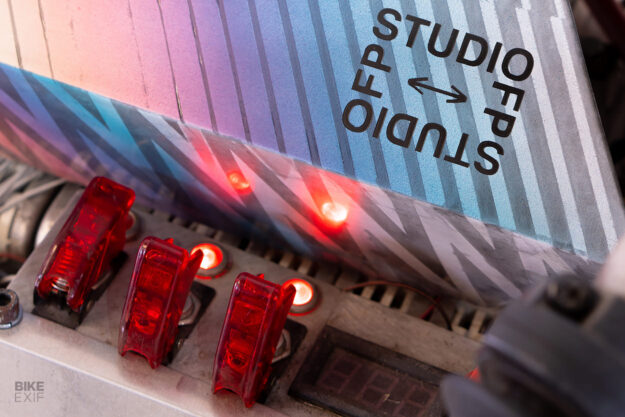 Power is controlled via a Domino throttle, hooked up to bare-bones clip-on bars. With one brake lever, and no switches or speedo, there’s very little going on in the cockpit.

Most of the bike’s operations happen via a custom-made control box, mounted to the right of the battery. It features three fighter jet-type toggle switches; the first turns the bike on, the second is the starter, and the third does the equivalent of putting the bike into gear. There’s a small charge indicator too. 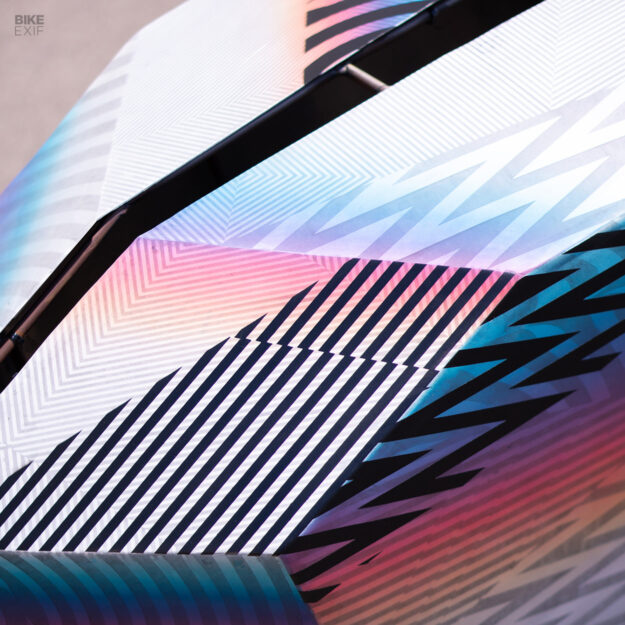 As for the disruptive artwork, that was all Felipe Pantone’s doing. Bizarro simply handed the bike over to him, giving him free rein to coat the build in his signature style.

Fresh off the block, they then took the bike to Glemseck to duke it out with other eye-popping electric race bikes. They came away with second place, losing only to a 171 hp Energica. It’s a respectable result, but Bizarro aren’t quite done. 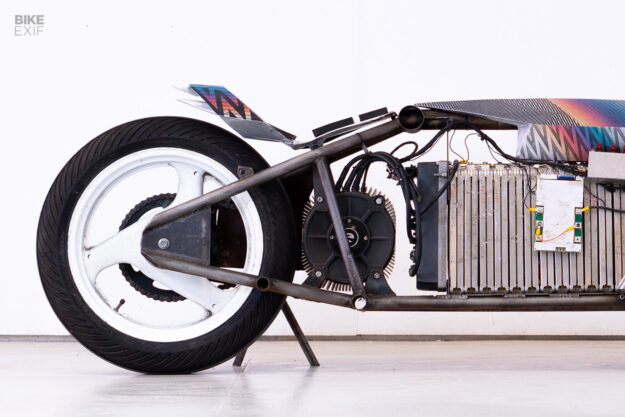 Cast an eye over Esputnik’s wiring and finishes, and everything feels a bit slap-dash. But there’s method in the madness—this is effectively a rolling prototype, with much more development planned.

Thanks to the simplicity of electric drivetrains, and their modular nature, there are endless ways in which Bizarro can reconfigure their race bike to go faster. And faster is the goal; the team is planning to tackle the famed Bonneville salt flats, with a target of 262 mph. 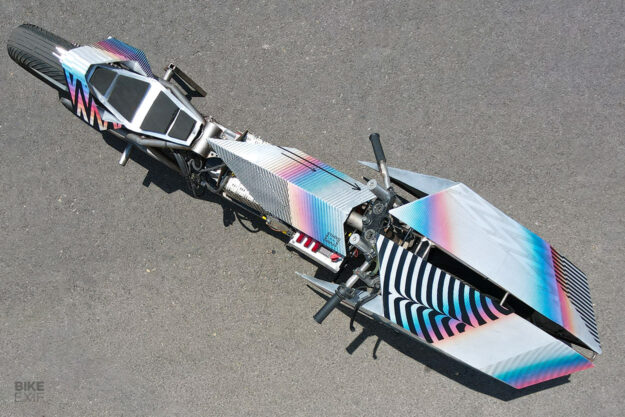 How they plan to hit that target is still a mystery, but one thing’s for sure: we can’t wait to see how Esputnik III turns out. 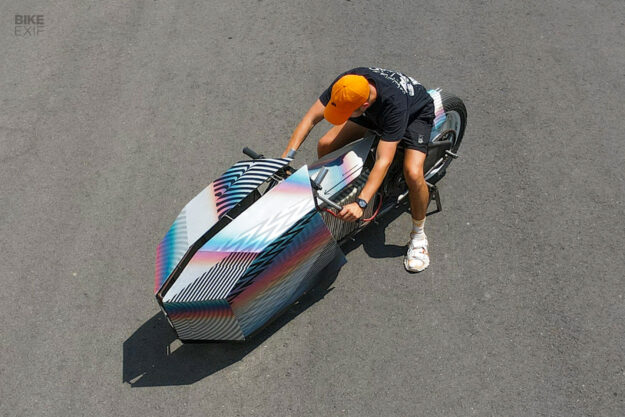