Evergreen: This Moto Guzzi V9 is a spin on the iconic V8 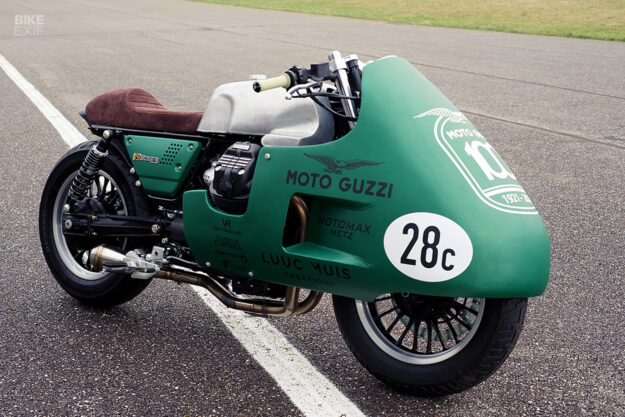 The Roman philosopher Seneca said that “luck is what happens when preparation meets opportunity.” If that’s true, then the story of this fetching Moto Guzzi V9 Bobber is one of supreme luck. Here’s how the stars aligned for a Dutch designer to build a homage to an Italian classic, with support from a French motorcycle dealer.

A while ago, Luuc Muis, the talent behind LM Creations, found himself inside the Motoplex Metz showroom in France’s Lorraine region. He’d made the trek down to pick up a new Indian Chief as a loaner, so that he could 3D-scan it to develop some parts. While he was there, he and Motoplex’s owner got to chatting. 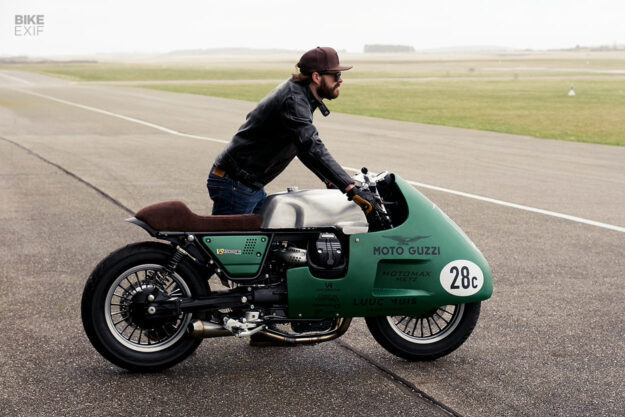 “They learned that I had built the Vanguard V85 TT that got released a few months before that,” Luuc tells us. “Soon we were talking about doing an anniversary project build, based on the new V9 Bobber, for Guzzi’s 100th birthday. Motoplex Metz is a flagship store for Piaggio, so they do a couple of out-of-the-box builds to promote the brand.”

“After about 10 minutes the owner said: ‘Take the V9 with you as well, create a design based on Moto Guzzi’s heritage and send us a quotation. If we like it, start building; if not, just bring the bike back when you return the Chief’.” 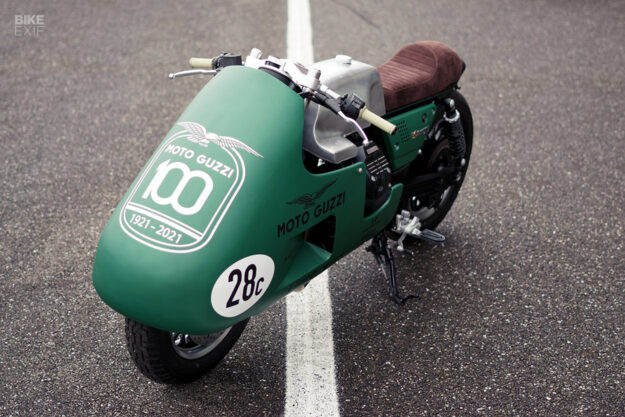 Luuc went back to his studio, and whipped up a rendering based on what is arguably the most iconic Moto Guzzi ever: the legendary V8 racer. Motoplex loved the idea, and the project was signed off.

Moving from behind his computer into the workshop, Luuc stripped the donor bike down and started creating physical mockups of the new parts. “I started by shaping foam blocks into a shape that represented the gas tank, to get a feeling for the size and shape,” he explains. “The fairing mockup I did with ‘CAD’—Cardboard Aided Design.” 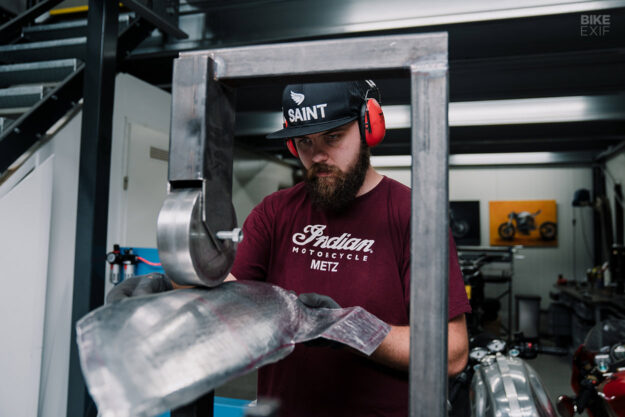 Next, the LM Creations team started shaping a new gas tank and fairing out of aluminum. While running sheets through his English wheel, Luuc constantly had the original V8 in the back of his mind.

“They were all hand built out of aluminum,” he says, “so no two were exactly the same. And if you look at photos, they are actually a bit rough around the edges. So we wanted to include a bit of this rough exterior in the design.” 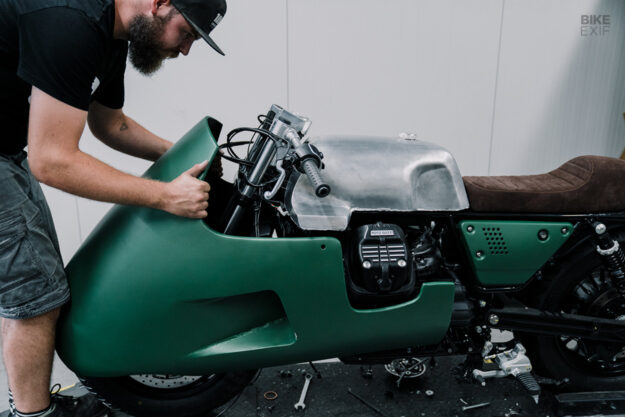 LM Creations managed to pay tribute to the V8 with their fairing design, while still adding a modern twist. The scoops on each side are a nod to the classic Guzzi, but they also serve to direct air to the V9’s transverse twin engine.

“This was one of the most challenging fairings I’ve ever made,” Luuc says. “Partly due to the size of the panels, and because it’s super hard to imitate the same fabrication pattern for both left and right, and get them even. It took me multiple tries to get it right.” 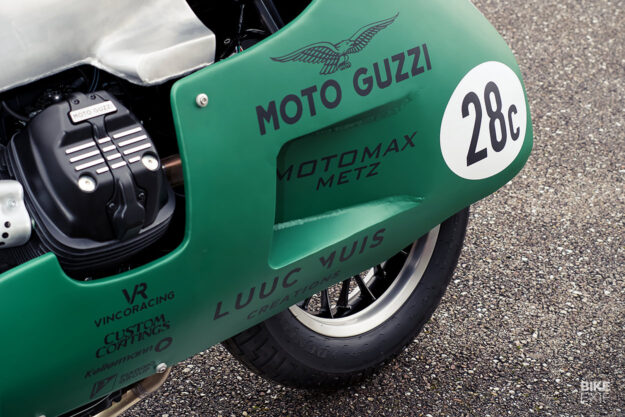 Equal consideration was given to the fairing’s paint job. The guys knew it had to be green, just like on the V8. But they opted for a green hue out of Moto Guzzi’s modern day catalog instead, adding another connection between past and present.

“As I mentioned, we wanted to keep that hand-built feel,” says Luuc. “So instead of smoothing the fairing with Bondo and a glossy paint, I asked Custom Coatings to put a matte metallic powder-coating on it. This will never chip off, and you can still see a few of the imperfections that you would with hand-built bikes and cars in the 50s.” 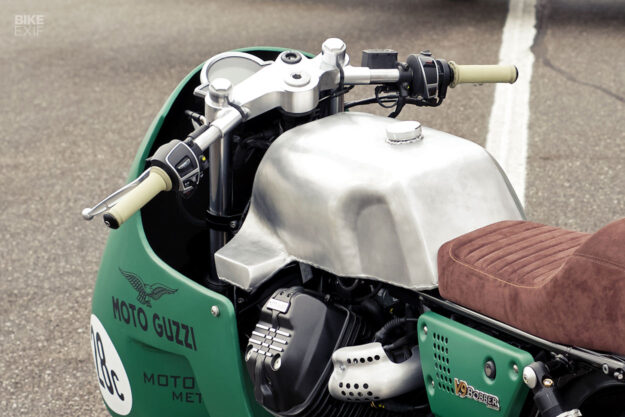 LM Creations built the fuel tank from scratch, adding knee idents and ‘wings’ that emulate those on the V8. Topped off with a knurled filler cap, the raw aluminum effect is delightfully classic and contrasts nicely against the green finishes. Again, Luuc put effort into keeping things particularly rustic.

“One of the oldest tricks in the book is to hide the welds, by using strips of the same aluminum as filler rod,” he tells us. “But we actually bought a different aluminum that’s darker, to emphasize the hand-built gas tank and the way it was constructed.” 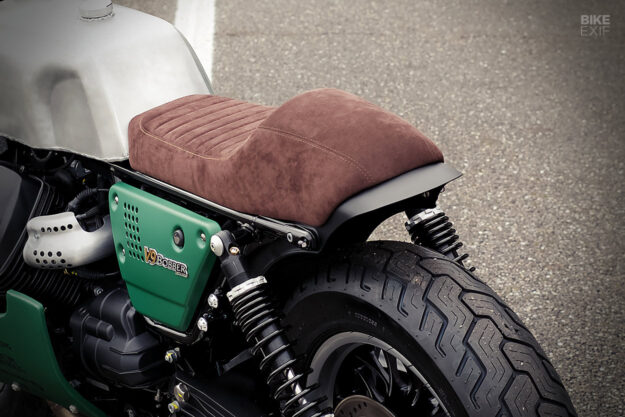 Complementing the custom bodywork is a custom solo seat, upholstered by Silver Machine in the Netherlands. Luuc also designed a new top yoke, complete with integrated clip-ons, and a mount for the OEM speedo. Kellermann supplied a pair of discreet taillight and turn signal combo LEDs, and headlights that are tucked in below the fairing.

Motoplex got their hands dirty too. They polished up the shoulders on the V9’s otherwise black wheels, installed longer rear shocks and added vintage off-white grips. 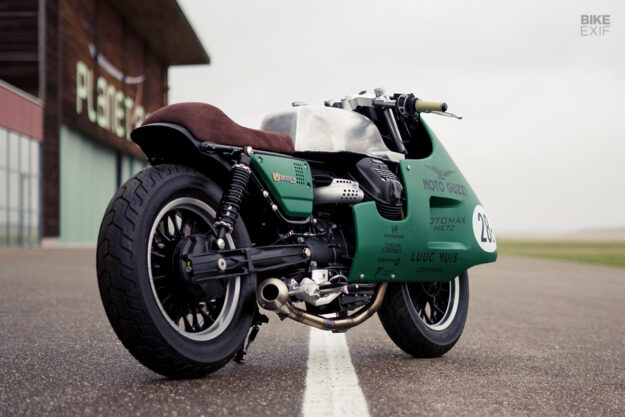 With a bold Moto Guzzi centenary logo emblazoned on the front, this modern Guzzi wears its heritage with pride. It’s a fantastic homage to an icon—and we’d wager that Luuc and Motoplex Metz are equally grateful for that serendipitous meeting. 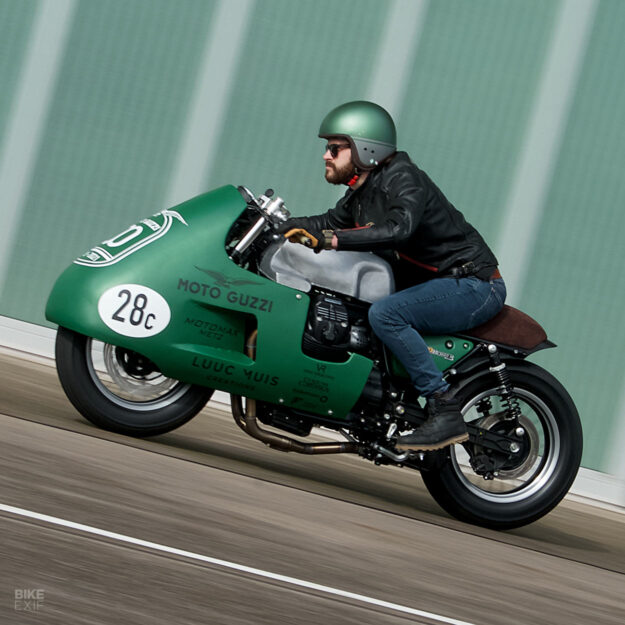