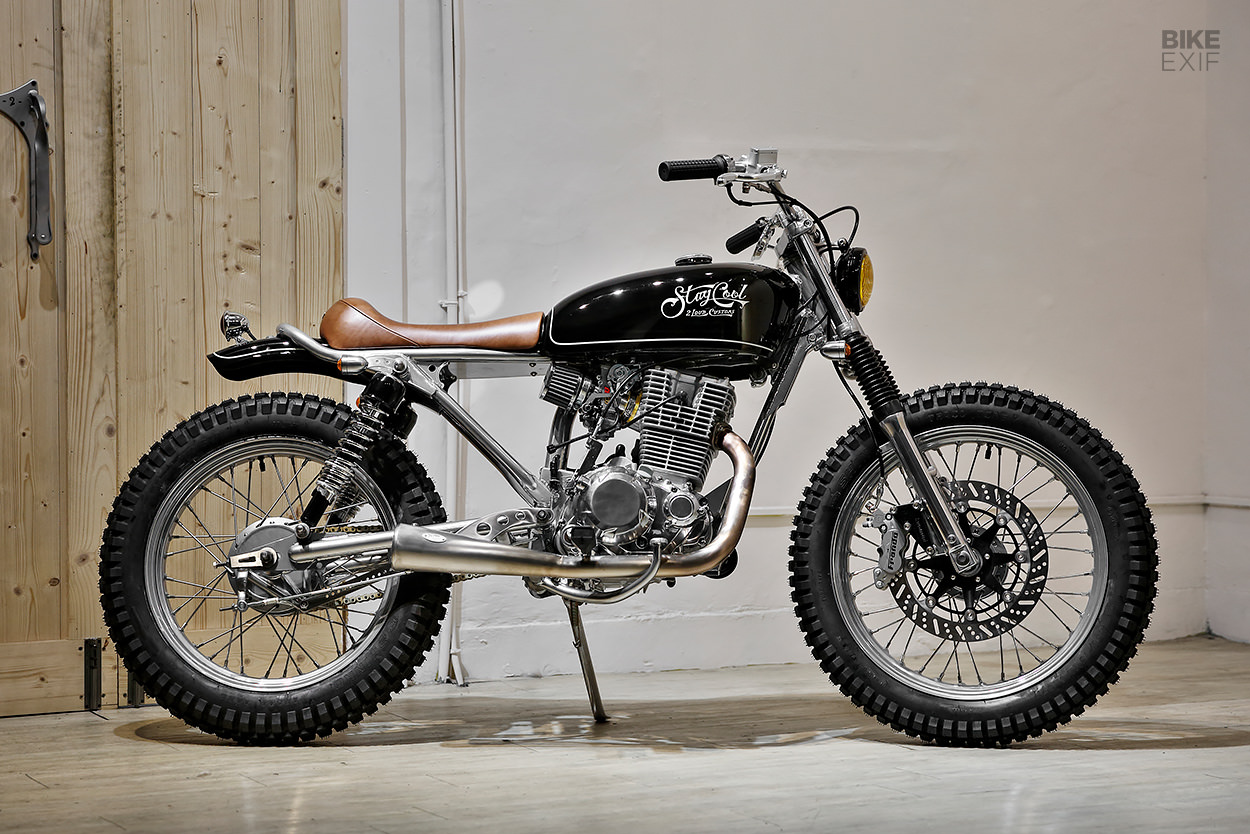 The definition of a commuter bike varies from the East to the West. In Europe, a prime commuter would be something like a Royal Enfield 650. But in Asia, scooters and tiny singles rule the roost, and companies like SYM make a killing.

This right here is an early 2000s-model SYM Wolf 150 Legend. As commuters go, it’s surprisingly attractive, with a pint-sized UJM vibe to it. And as the Taiwanese shop 2LOUD Custom has just shown, it’s ripe for customization too. 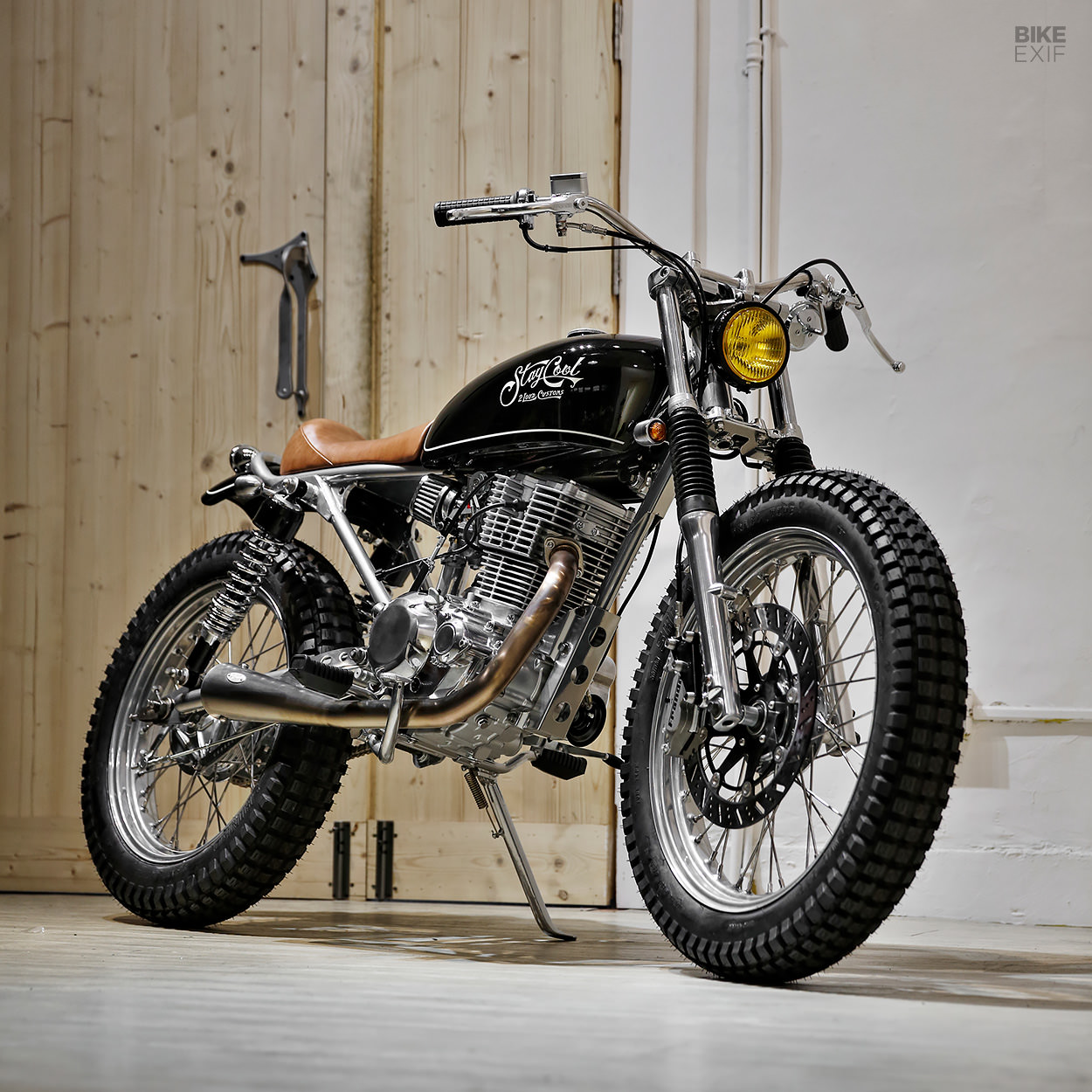 This isn’t the first time that the 2LOUD dream team of Ma ‘Max’ Yicheng and Lu Yongyu have worked magic on a SYM Wolf. They know their way around these locally made machines—and they know how to make them look amazing.

This Wolf came from a customer with a short list of must-haves: a brown seat, black fuel tank and ‘chocolate block’ tires. As for the rest, he was happy for 2LOUD to slap their signature style on the little 150. So Max and Lu went to town, transforming this grocery getter into a far more stylish street tracker. 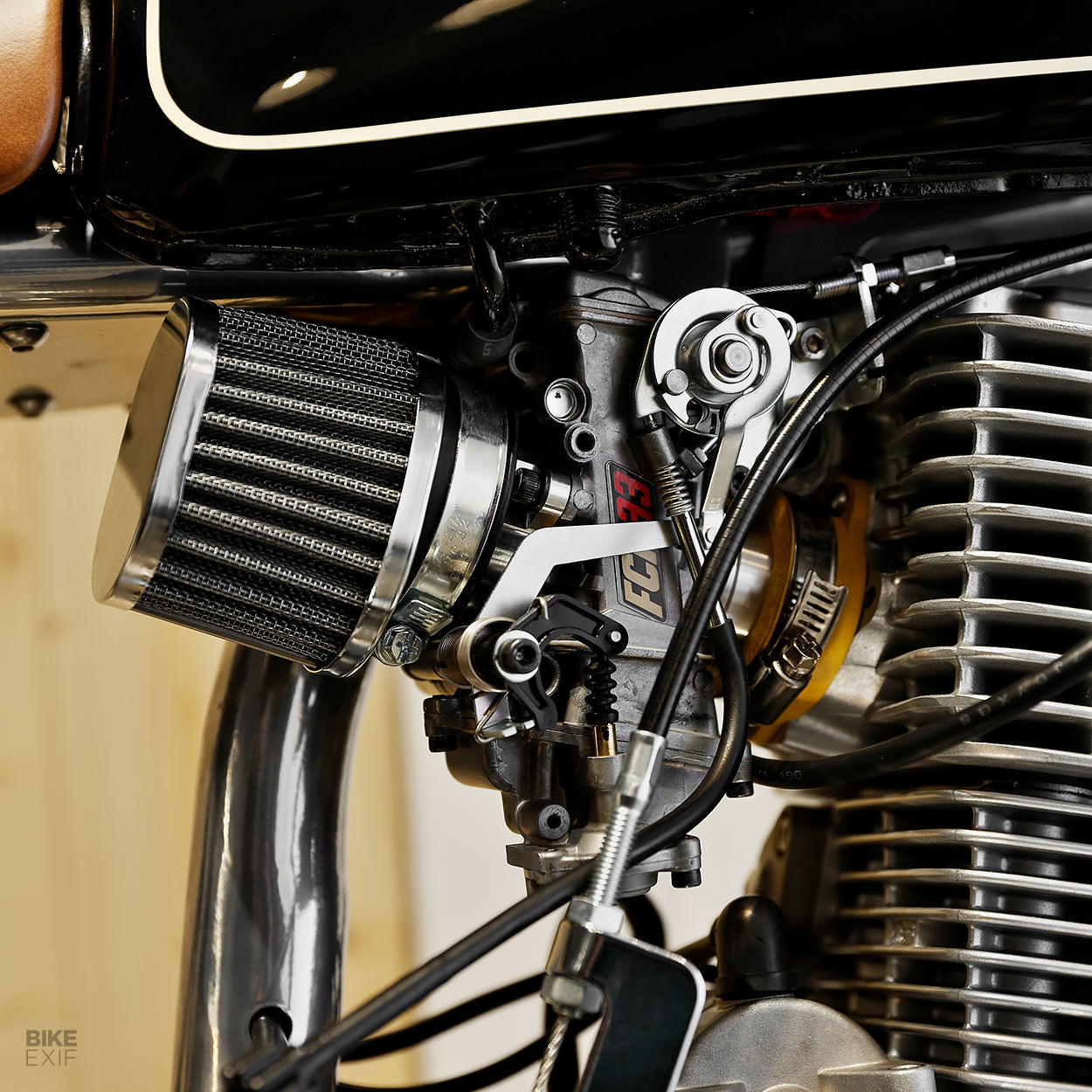 First on the list was a much-needed power boost—and the easiest way to do that was to swap out the entire drivetrain. 2LOUD sourced a Chinese-made Haoyue engine; a 255 cc four-valve single, with a six-speed transmission and a FCR33 carb, capable of a top speed of over 140 km/h.

We asked Max how hard an engine swap is on these bikes, and he brushed it off as “not difficult.” 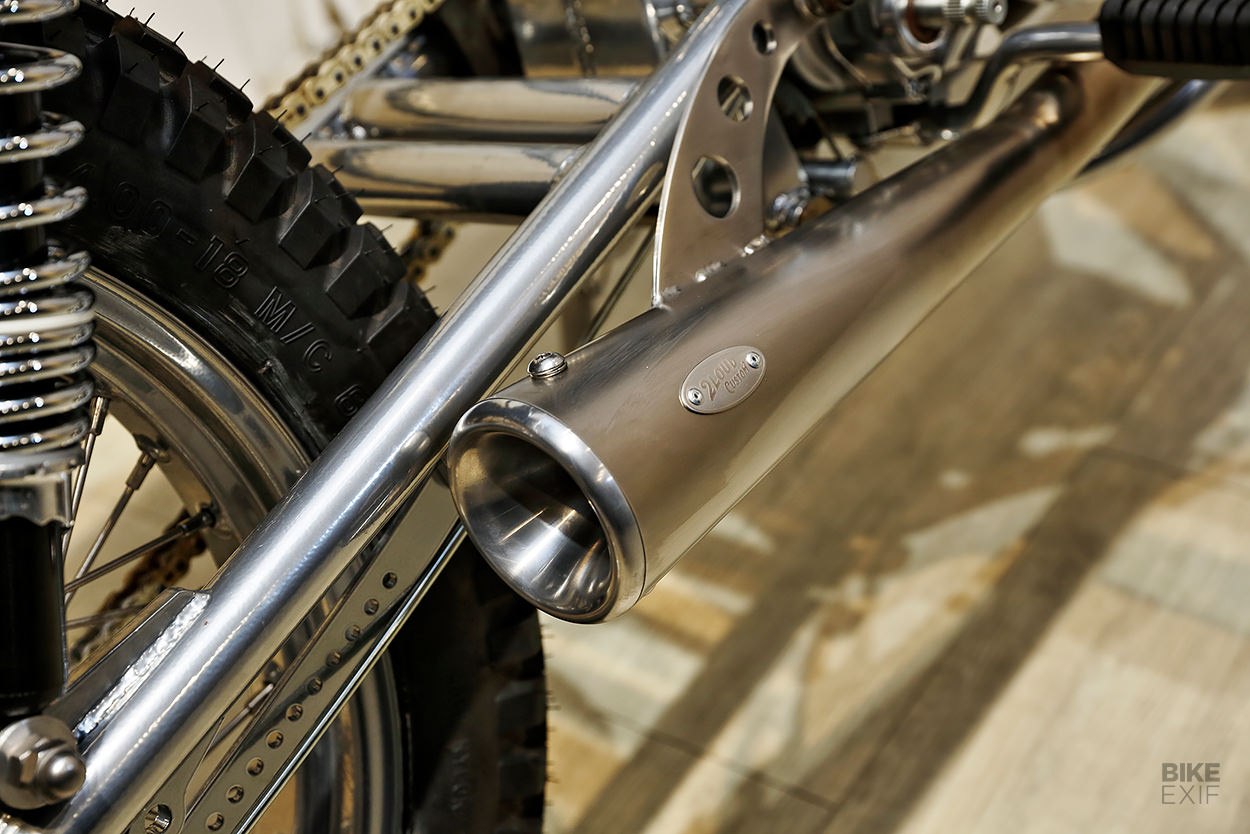 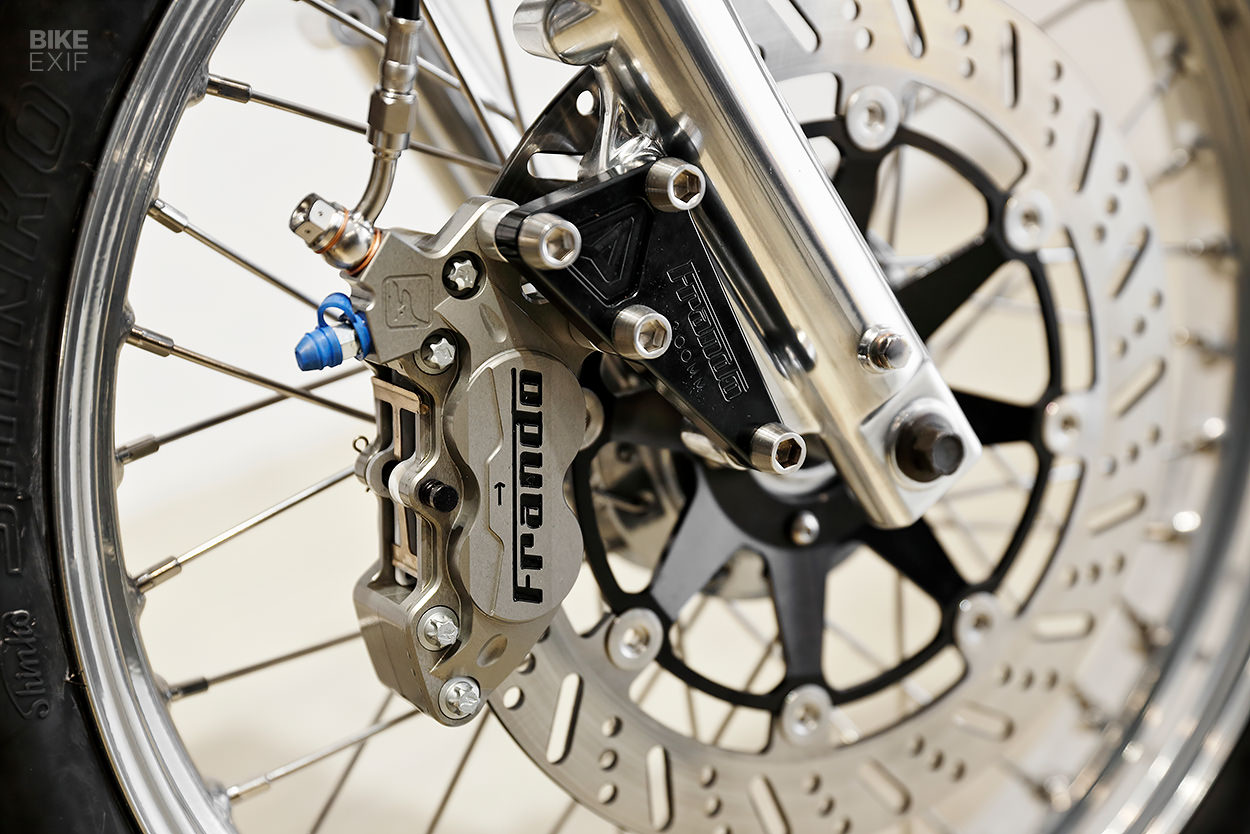 Moving to the chassis, the guys ditched the Wolf’s stock alloy wheels for a new set of spoked items. They’re custom-built 19F/18R hoops, shod with Shinko trail tires. The front brake’s been upgraded with a new caliper and master cylinder from Frando, but the rear keeps the OEM drum setup.

All the original bodywork’s been binned too. Up top is a Honda CB350 fuel tank—lightly fettled to fit the SYM frame. Behind it is a custom leather saddle, sitting atop a modified subframe with a classic kicked-up tail. The rear’s finished off with a stubby fender and a generic chromed taillight. 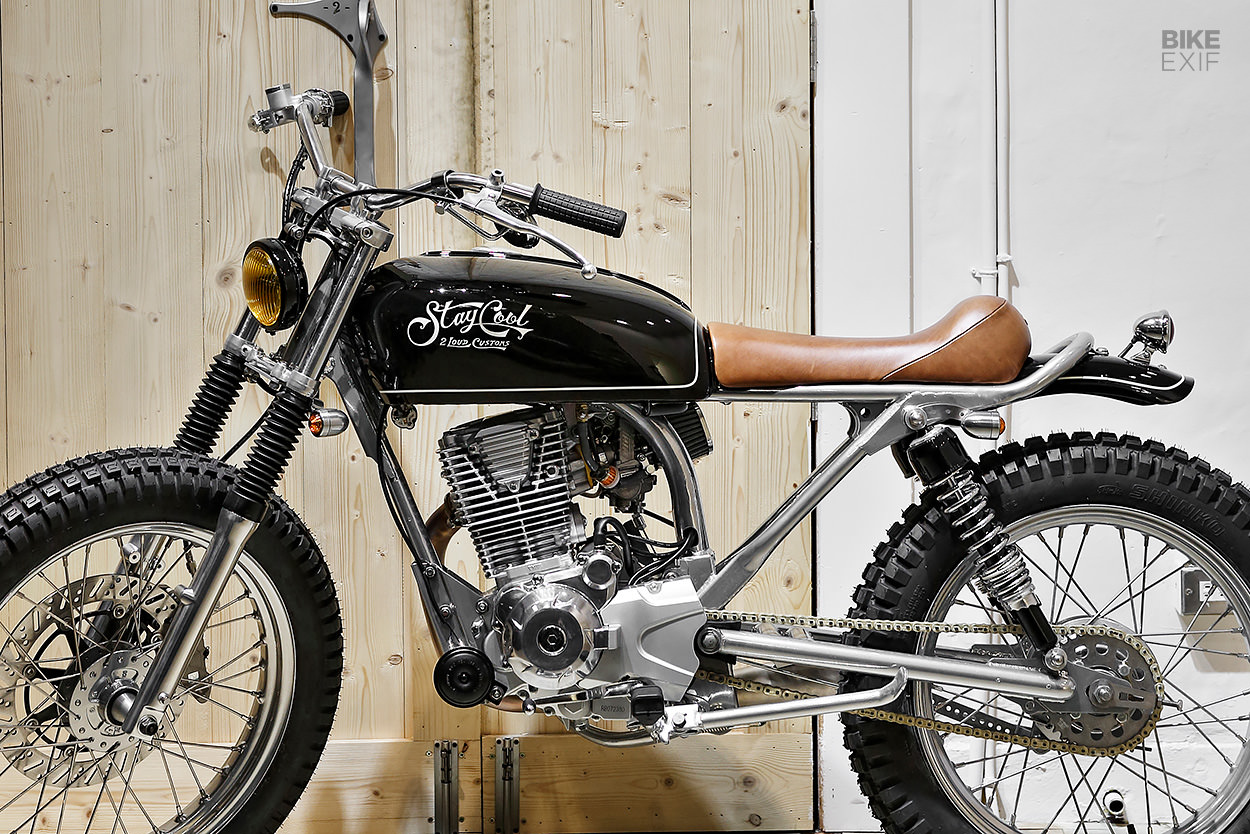 The area under the seat is super sano, thanks to a re-wire and the use of a tiny battery. 2LOUD have developed their own Lithium-ion unit that measures less than 2” thick; it’s tucked into a slim electrics box under the seat.

Bits like the headlight and turn signals are all off-the-shelf items from Taiwanese brands, but the brackets they’re mounted on are hand made. The SYM also wears new handlebars, grips and mini-switches. 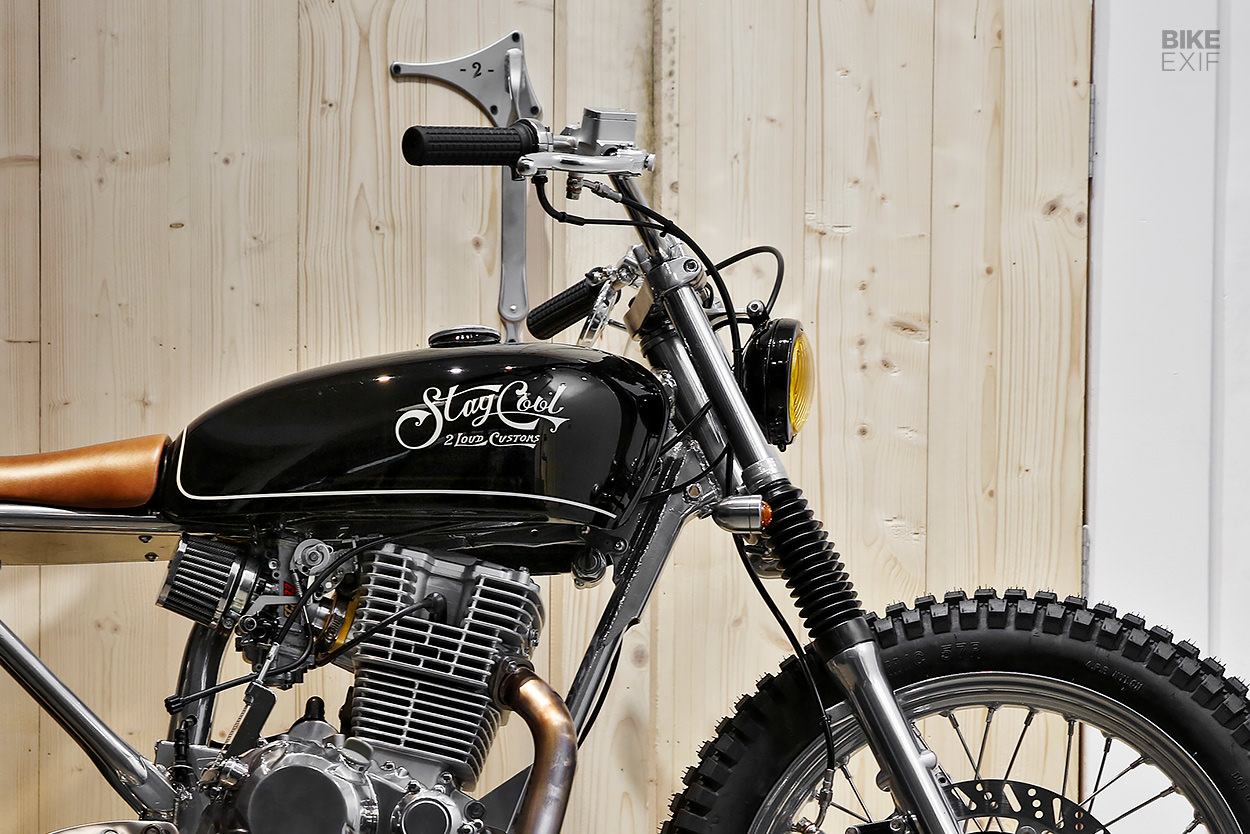 2LOUD kept the finishes on this tidy street tracker minimal and classy. The frame, swingarm and other parts were done in a tough high-heat silver paint, while the tank and fender are painted in a timeless black and white pin-stripe combo.

Salmo Works handled the lettering on the fuel tank; “Stay Cool.” It sums up this build perfectly, because let’s face it: if you have to commute, at least do it in style. 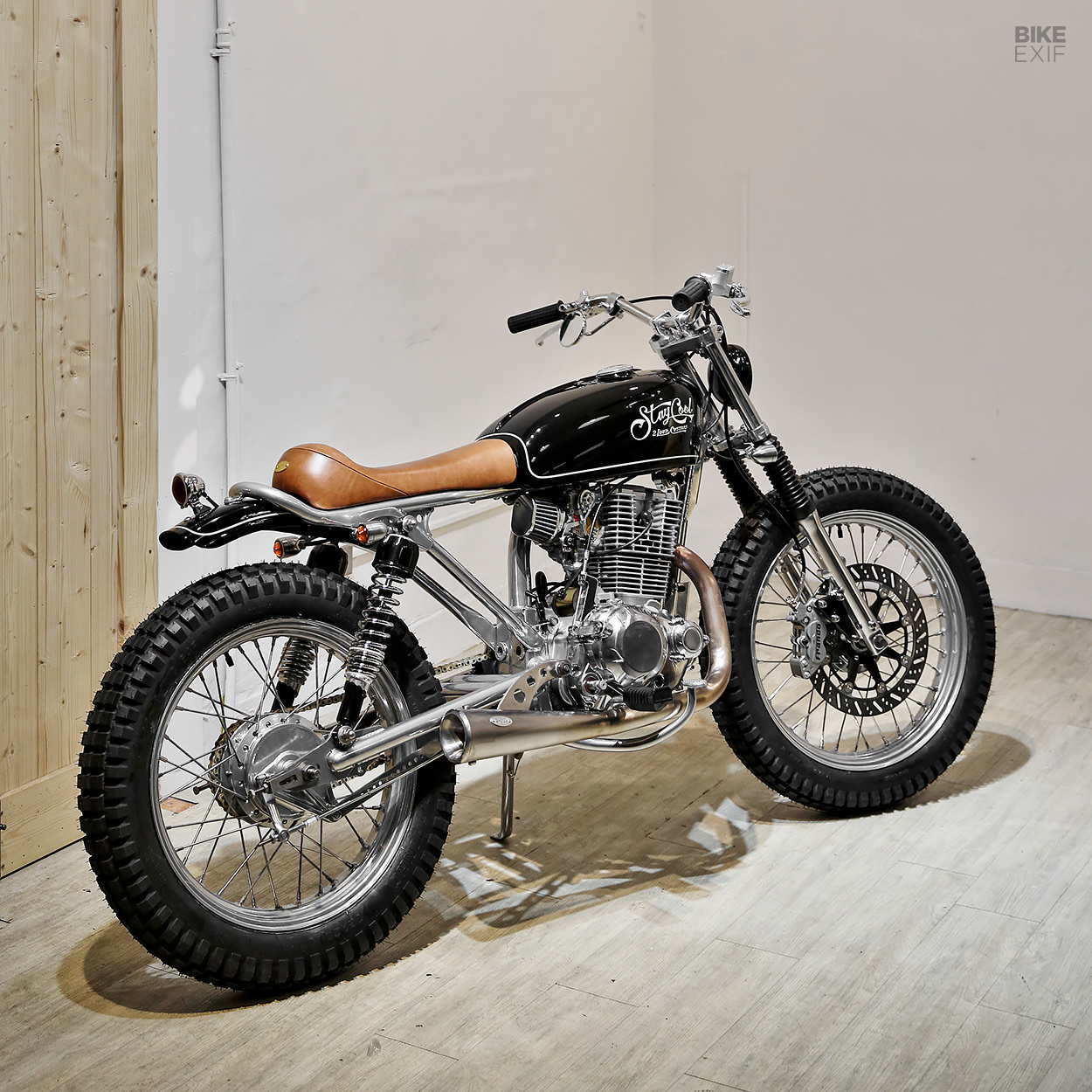