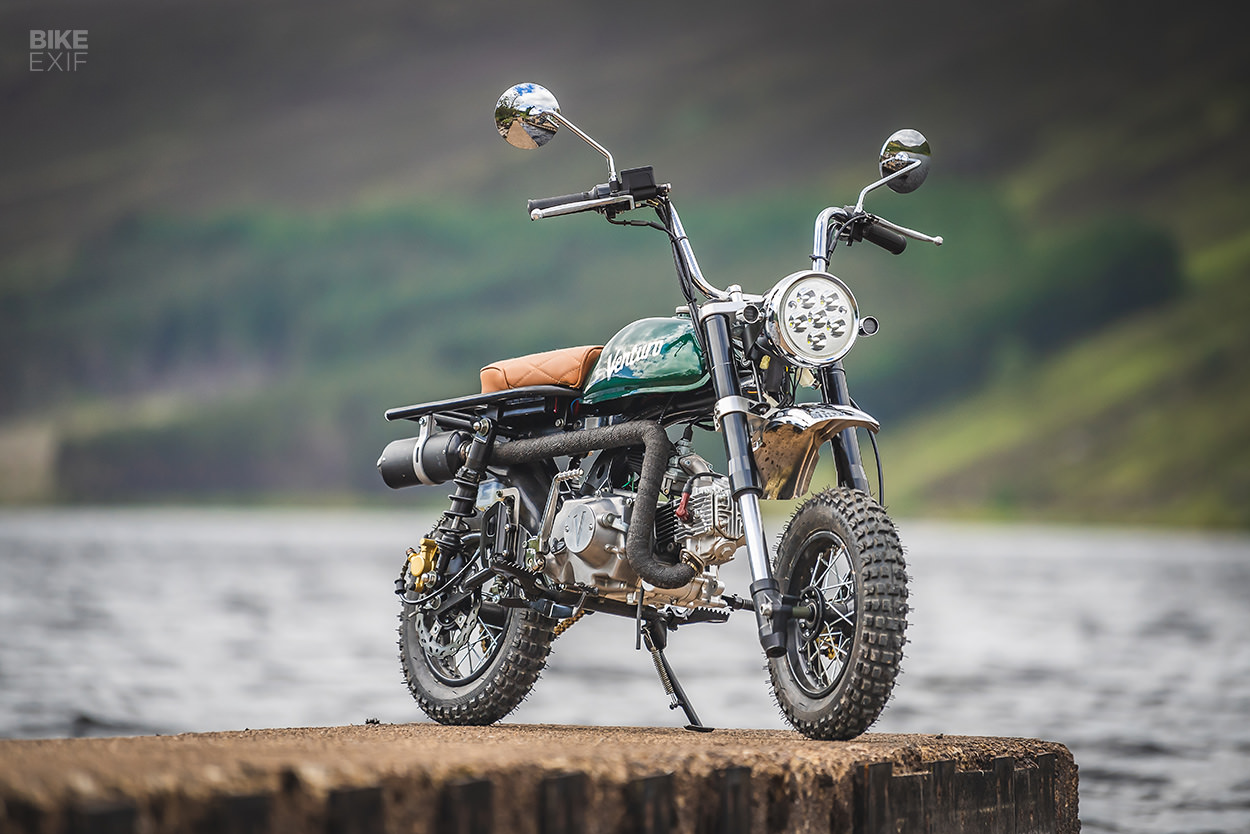 Millions of articles have been written debating the ultimate adventure bike. And not a single one of them matters. Because the team of maniacs who run The Adventurists have designed what is possibly the ultimate off-road machine: a monkey bike that literally flies.

I assure you we’re not kidding. But to understand why the Bristol-based crew of degenerates have combined a monkey bike with a parasail engine and wing, you first need to know what they’re all about. 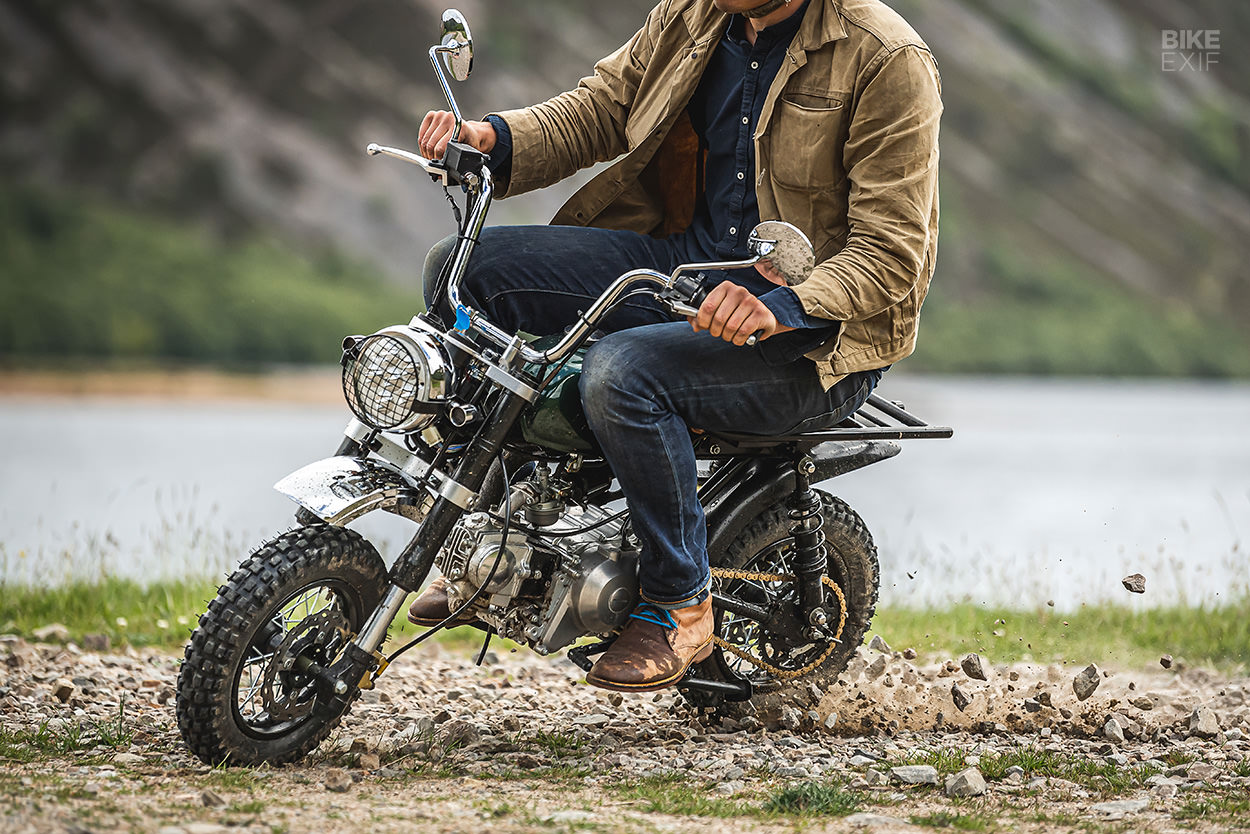 The Adventurists are a loose collection of evil geniuses plotting madcap journeys around the world. With an increasing number of events being run since their establishment 2003, they now dub themselves “generators of odyssey and chaos.” And they’re quite serious.

Their adventures have idiots launch clapped-out cars across Mongolian steppes, smash out thousands of miles on rickshaws and throw tiny bikes down remote mountains. And it’s that ‘Monkey Run’ which has led to the development of the Venturo flying monkey bike. 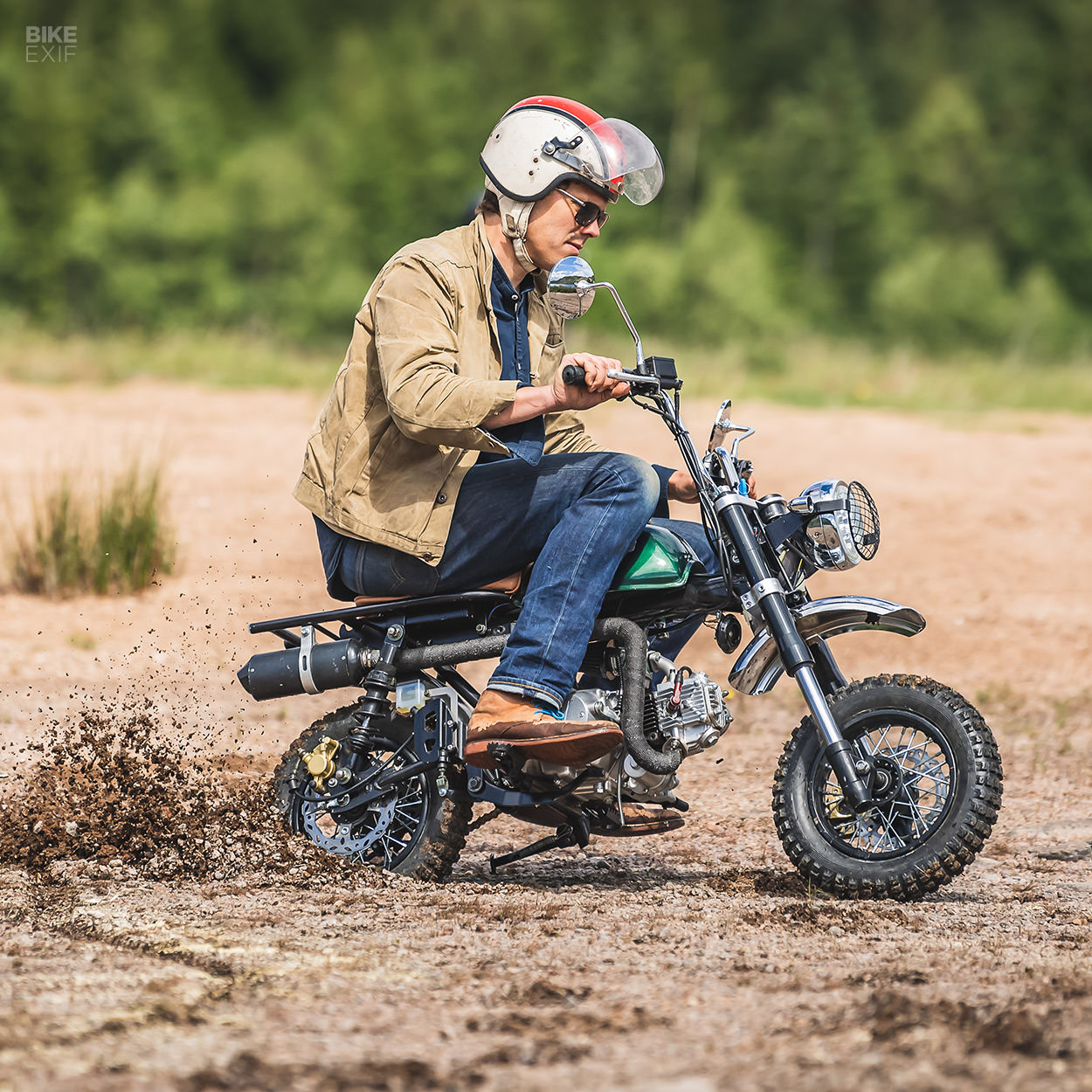 “Since what seems like forever, we’ve been organizing these large-scale adventures where we set the stage for chaos,” chief adventurer Tom Morgan says. “Things like the Kraken Cup where we sail rubbish, ancient fishing boats in the Indian Ocean, or the Icarus Cup, which is the longest paramotor race in the world”.

But the Monkey Run remains one of their most successful events. And it sounds like a blast. 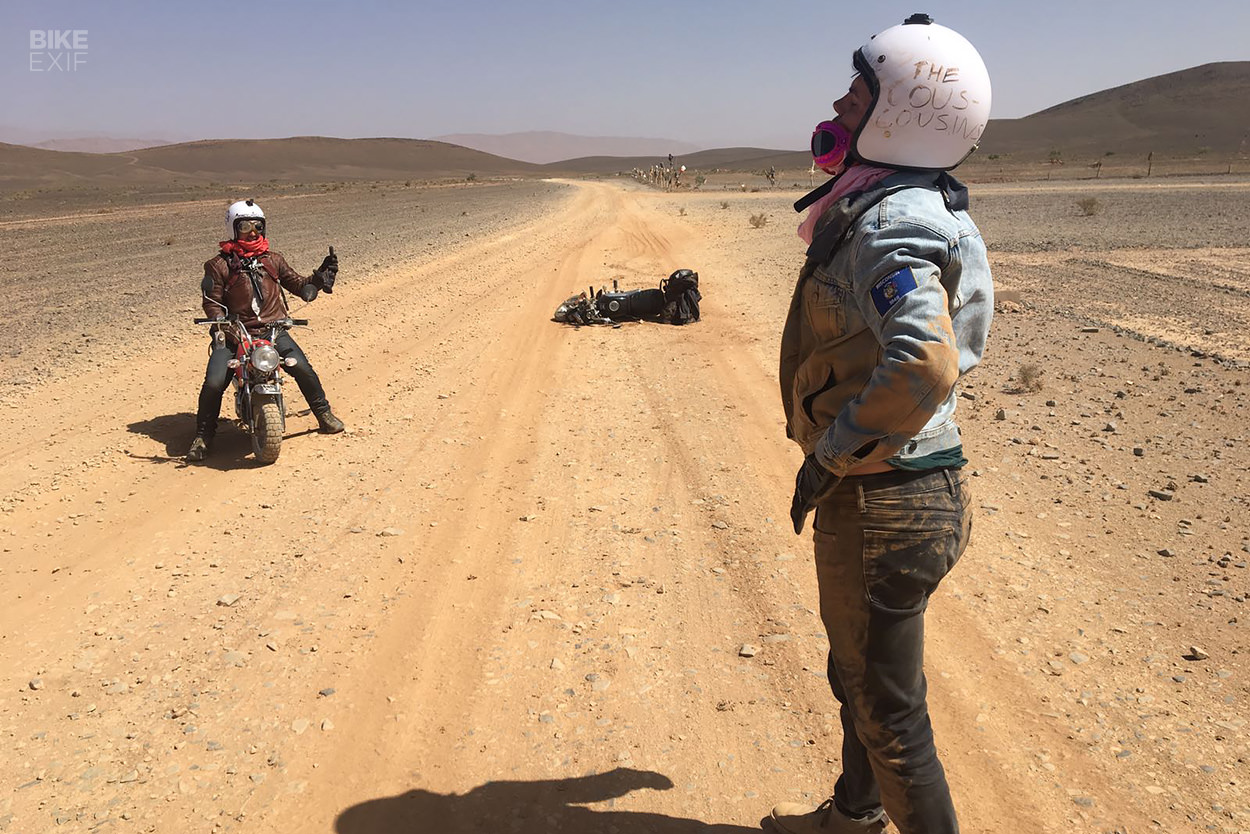 “We pit tiny monkey bikes against some of the toughest terrain on the planet in Peru, Morocco, Mongolia, Romania and more,” Tom says. “And I suspect we’ve broken and stuck back together more monkey bikes than anyone on earth. After all that I really wanted to make the ultimate adventure monkey”.

The limited-run Venturo has been developed to be as reliable and robust as possible, all while being able to withstand anything 180 lbs of deranged meat can throw at it. The prototype’s based on a heavily modified Skyteam Monkey chassis, with a 50 cc Loncin engine. The team is testing a few motors for production though, and will offer the Venturo in 50 cc and 125 cc variants. 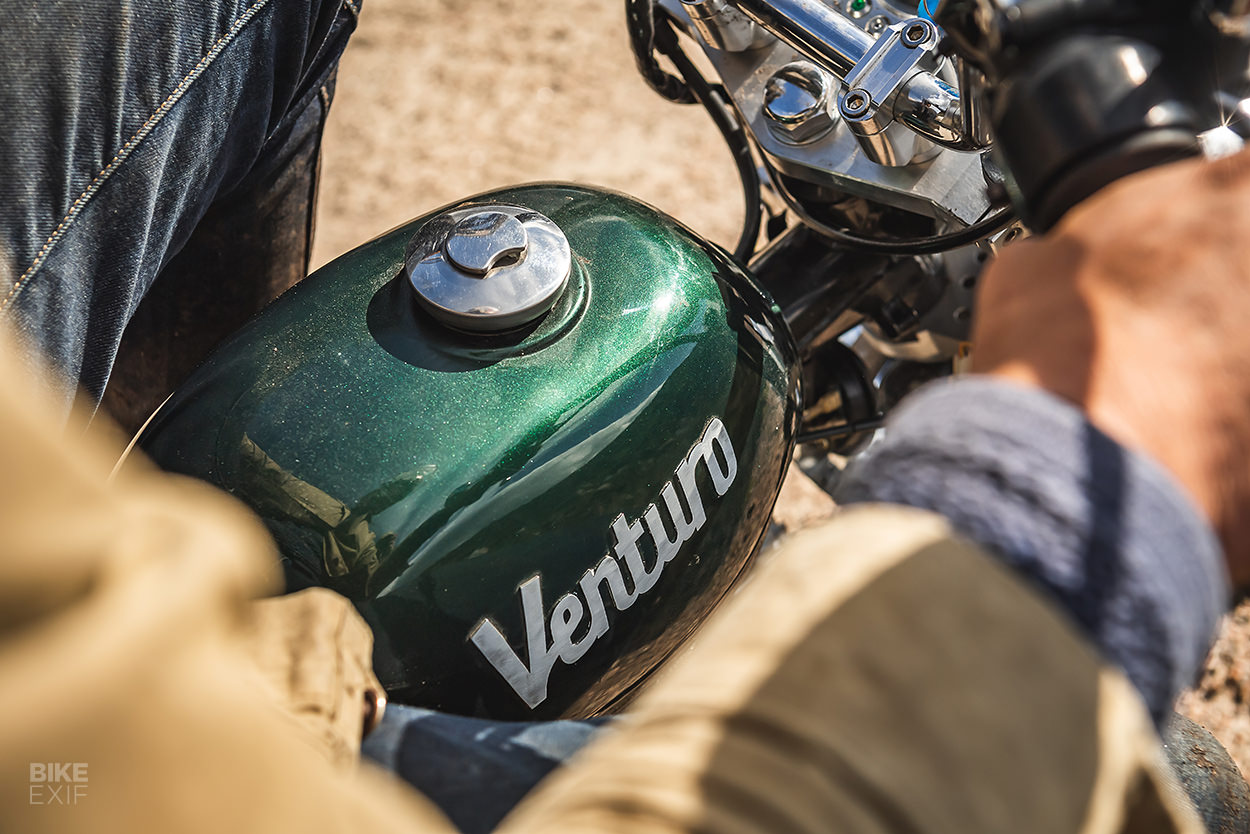 But most importantly the new ride has to be simple. “In our experience of breaking down in the middle of nowhere, less is definitely more when all you have to fix your bike is a rock and yesterday’s sandwich,” Tom says.

So the Venturo has had its entire electrical system reworked, with the electric start removed and a lighter Lithium-ion battery mounted. A new 4.5 liter [1.2 gallon] tank is fitted, and it uses a standard carburetor, as God intended. 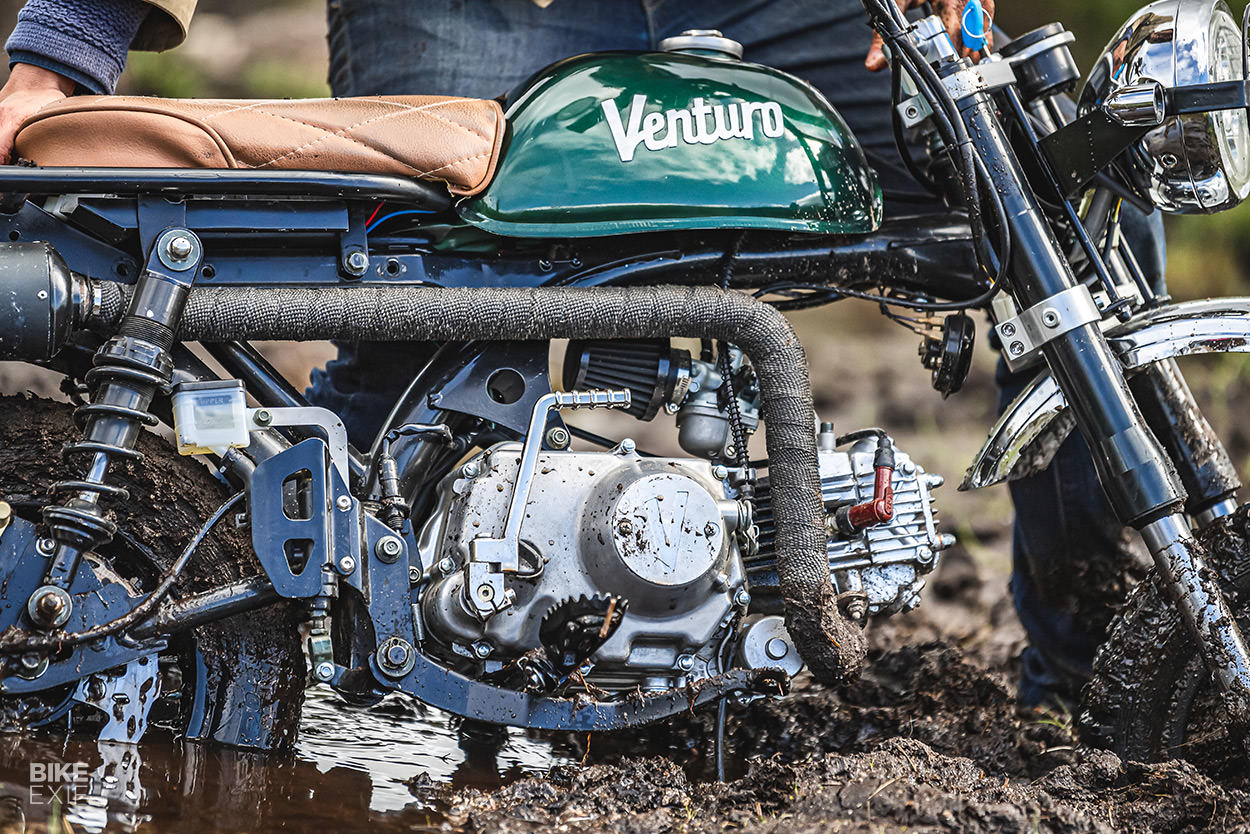 It runs beefed-up suspension on the front and rear with a scratch-built yoke designed to house the instruments. The handlebars are the same tried and test high rise units that The Adventurists fit to all of their monkey bikes, and wear Renthal MX grips and micro switches. There’s an 6.5” LED headlight out front.

A stainless upswept exhaust squeezes a few more fractions-of-a-horsepower out of the 50cc engine, as well as offering a little more clearance and drop-ability. 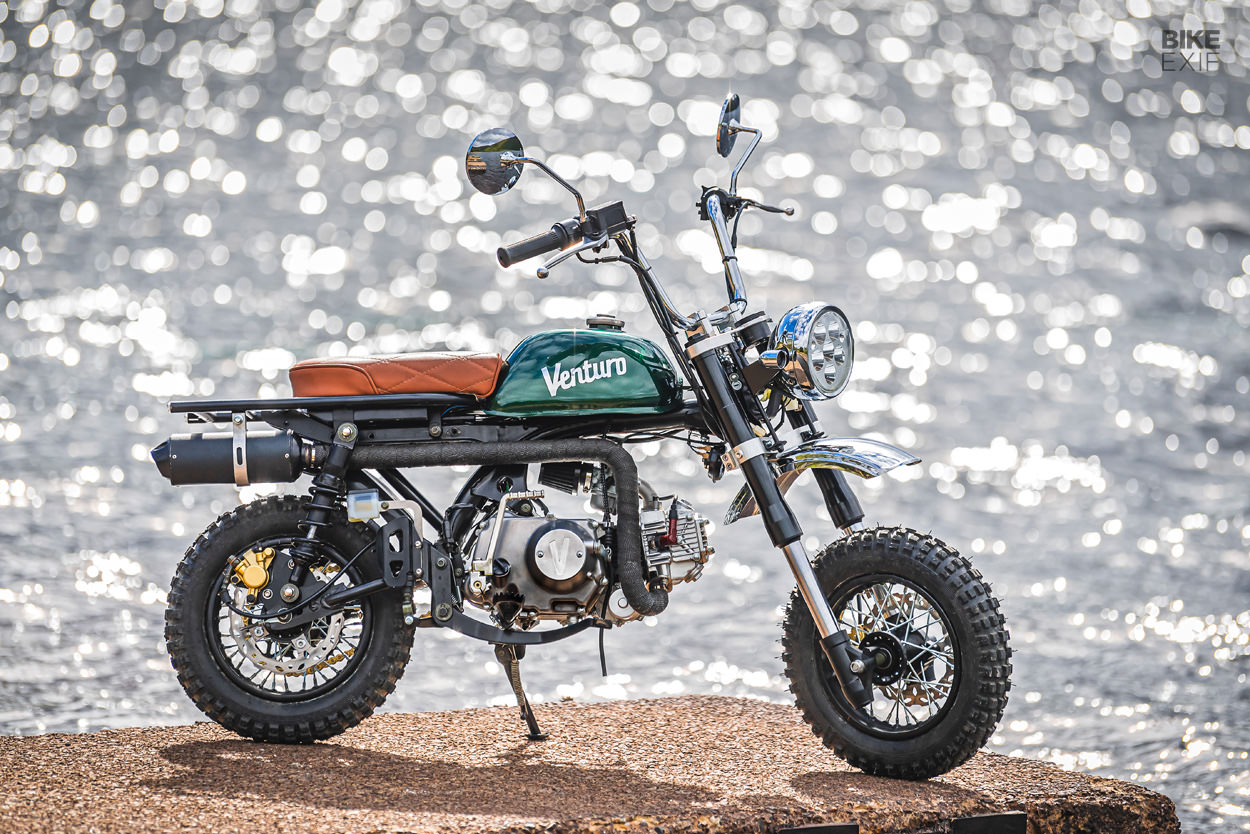 But the rear rack is where things get really interesting. It’s been designed to carry “all sorts of luggage and useless shit,” and houses drop-proof indicators. But it also has a fitting for a two-stroke paramotor—for the brave souls who really want to up the stakes on their next adventure.

And they will have to be brave… or stupid. “I wouldn’t call it safe yet,” Tom admits. “But after we’ve tested out a few more iterations of the additional flying package we’ll make it available for anyone with a death wish”. 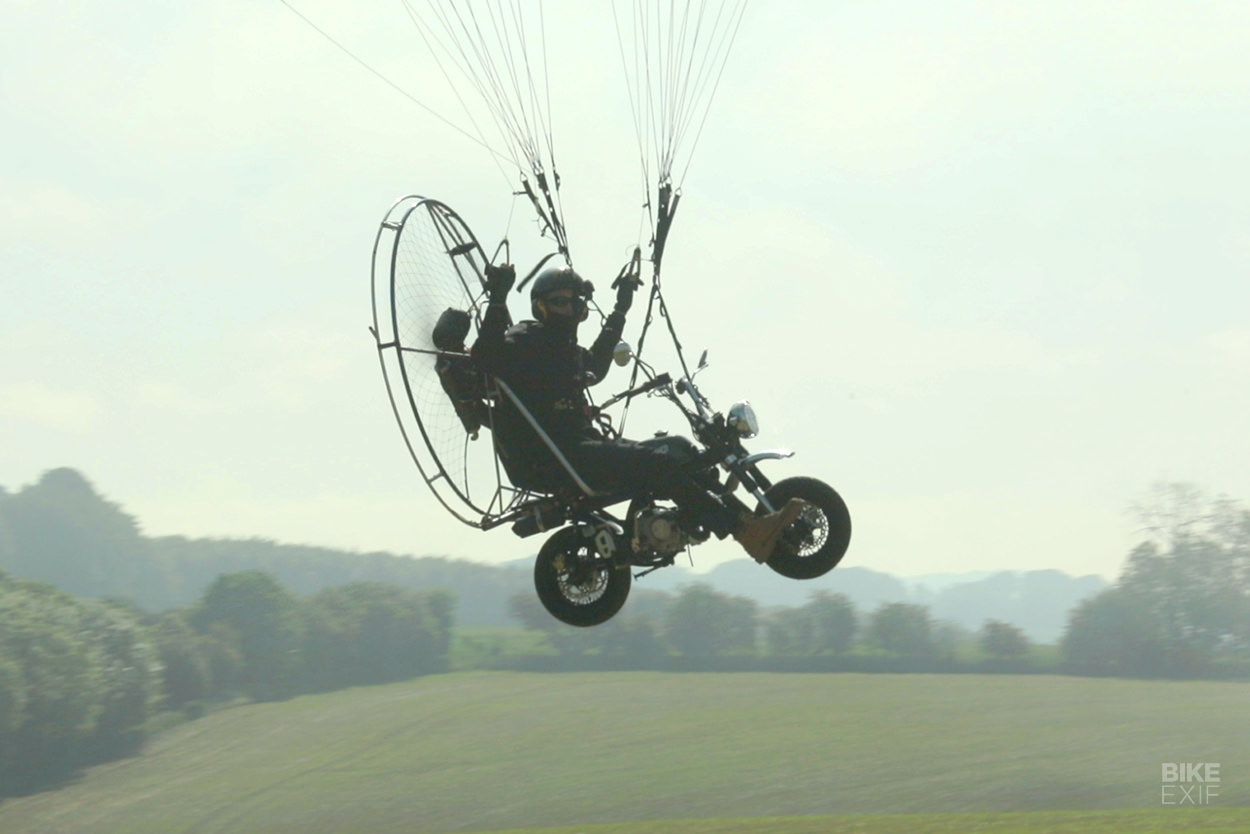 The setup includes foot pegs for the front wheel to steer the monkey during takeoff, and an extra brace that connects the paramotor to the chassis. And it should come as quite the consolation that the fabrication work is going to be completed by the very sensible team at Gilo Industries, an engineering company in Dorset.

But if you’re interested in buying a Venturo don’t think that you can just lay down your hard-earned cash, shake some hands, pose for a photo and ride away. That would be far too easy for The Adventurists. “We wanted to ensure they really will be used for adventure,” Tom says. 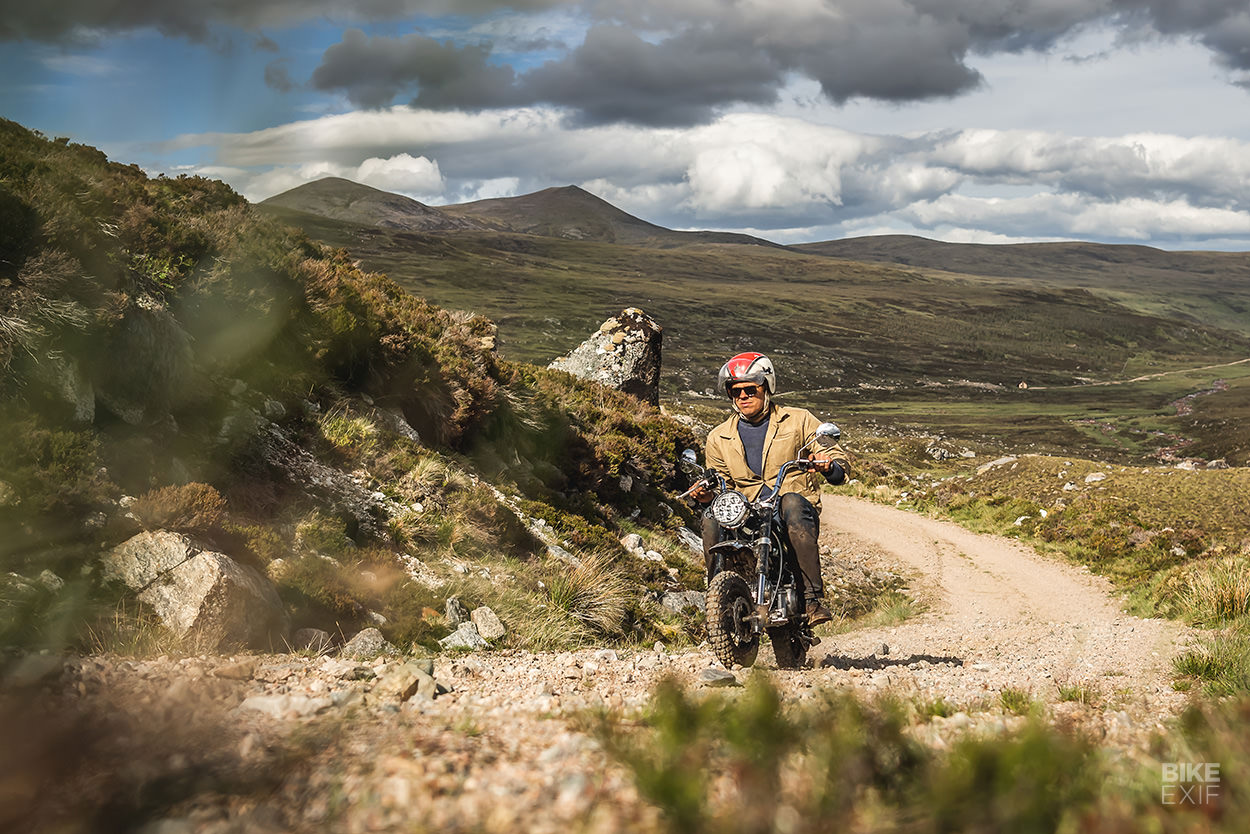 “So we decided not to send them to people who buy them. Instead we’re going to put them somewhere really inconvenient and make people go and pick them up. Like a little mini adventure before you even start”.

As time rolls on they intend to run mission-specific models for different terrain. So in a few years you’ll be able to get a monkey set up for tackling the deserts of northern Africa, or the mud of the Amazon. Neat, huh? 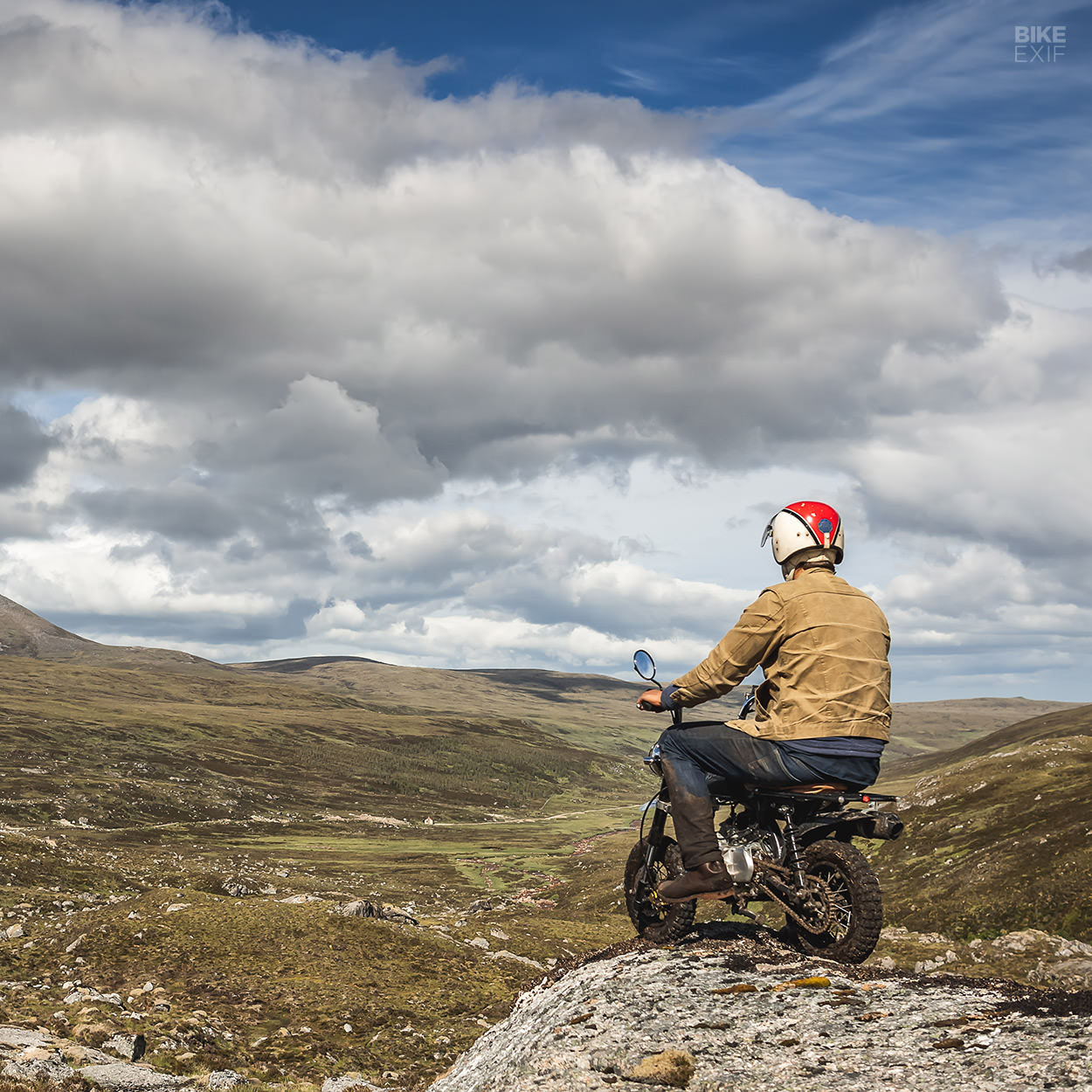 In the meantime you’ll also have to keep your eyes peeled for an electric model being developed. “We’re imaginatively calling it ‘The Electric’,” says Tom. “We’re hopefully heading off to some never-before crossed parts of Bhutan to test it out this year. It’s also quite ridiculous.” 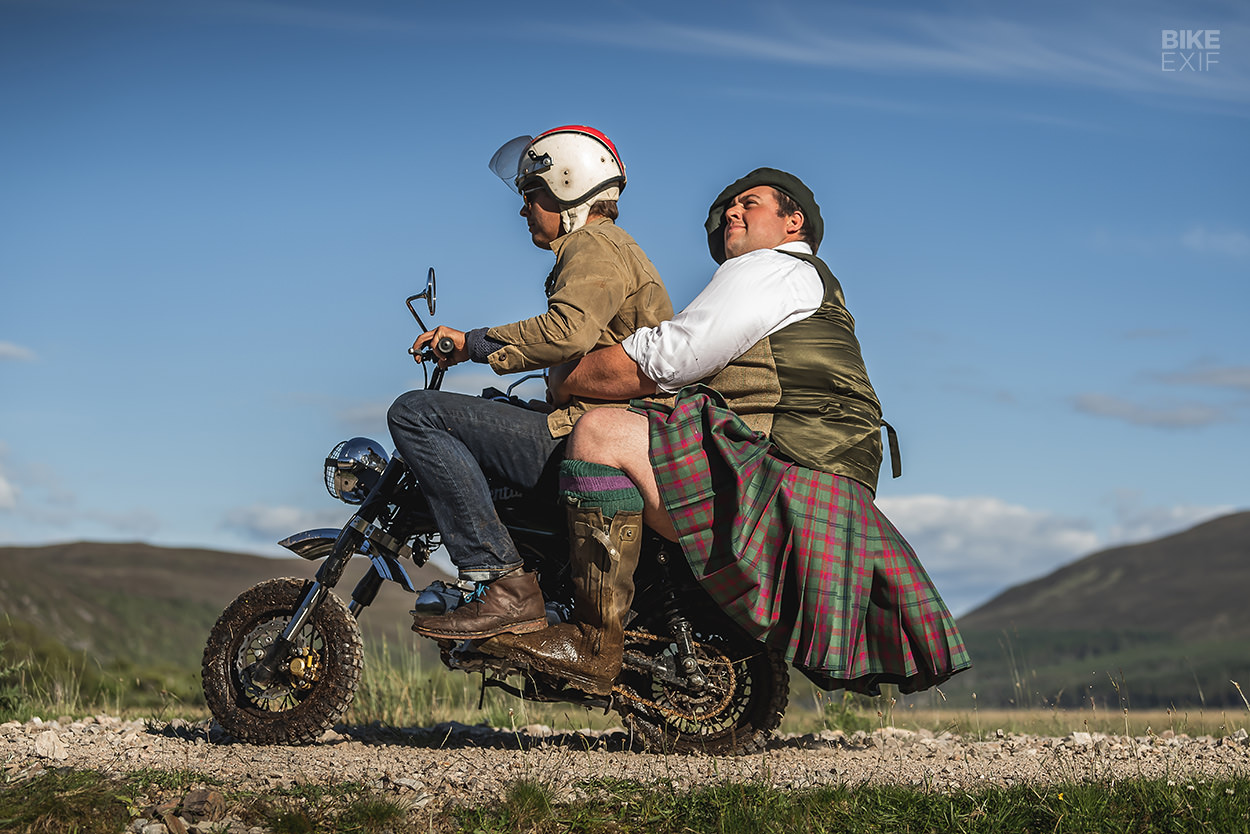 So, dear reader, you can keep your massive boxer-engined BMW. You can hang onto your electric-aid-riddled KTM. The adventure bike in the truest sense of the word is about to hit the market.