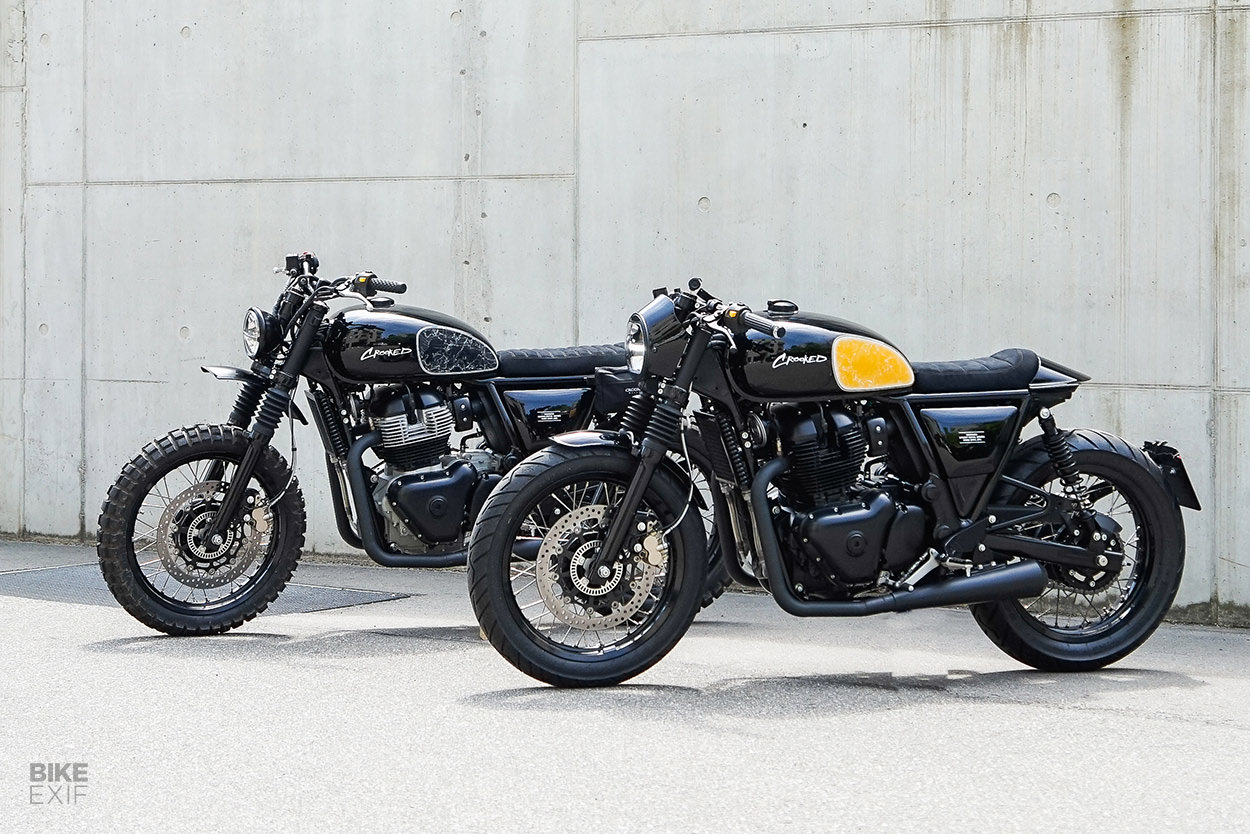 High-end custom motorcycles are nice to look at, but they take substantial talent to build and serious money to buy. That’s why for every top dollar custom out there, there are scores of bikes that have been lightly tweaked, just enough to make them stand out from the crowd. It’s also why some manufacturers are making bikes that are relatively easy to customize—and why more custom builders are producing kits.

These two customs from Germany’s Crooked Motorcycles epitomize that ethos. Both use the refreshingly simple Royal Enfield Interceptor 650 as a base, and both are dressed in plug-and-play parts. 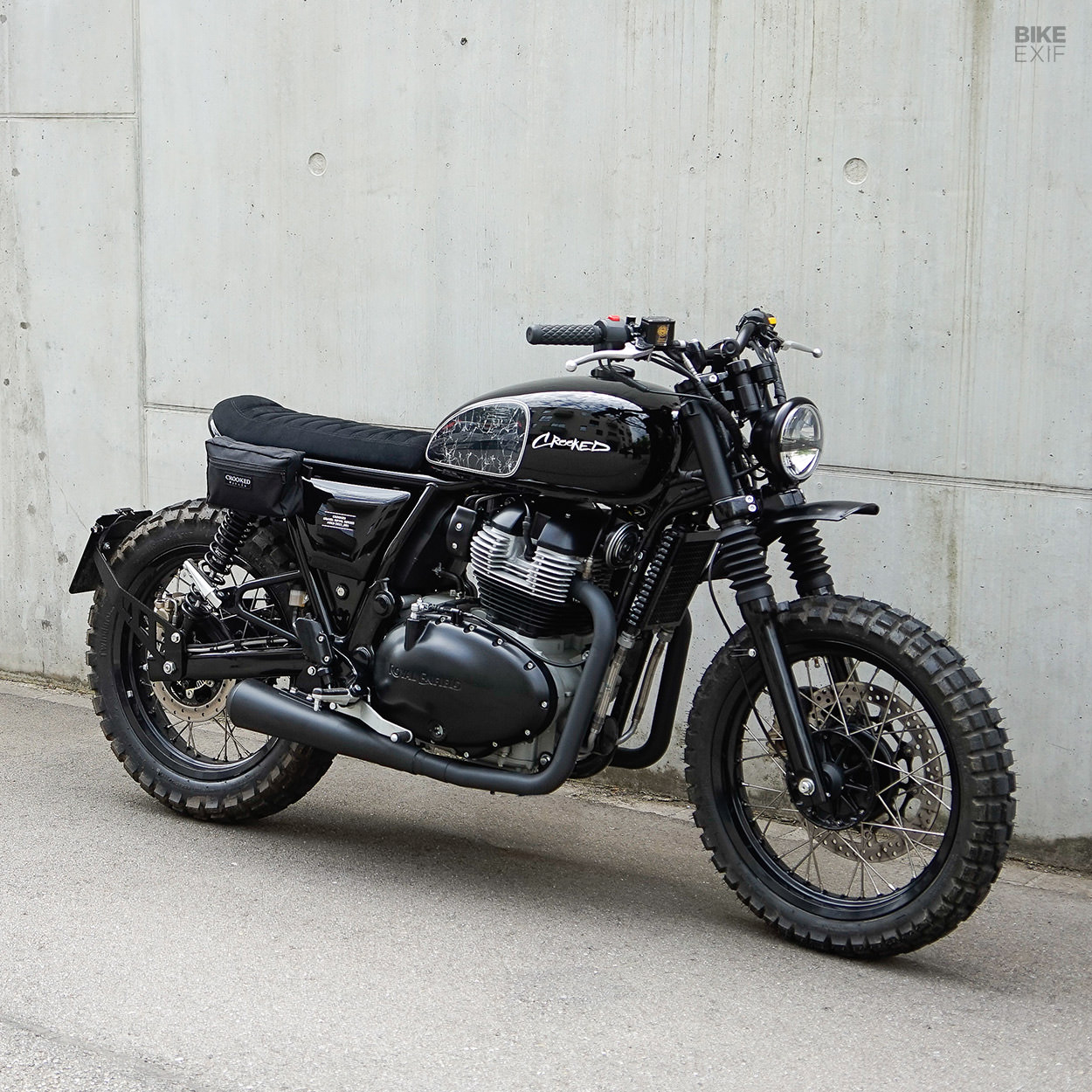 Crooked has called this their ‘RoyalSERIES’, and offers it in ‘Gravel’ [above] and ‘Street’ [below] versions. Builders Jakob Müller and Dominikus Braun were inspired to spin the Interceptor 650 off into these two directions, after owning and riding one for 18 months.

“After this whole difficult pandemic phase, we were motivated to build a series that is built on fun,” says Dominikus. “To leave everyday life behind, grab some friends and just have a good time on bikes!” 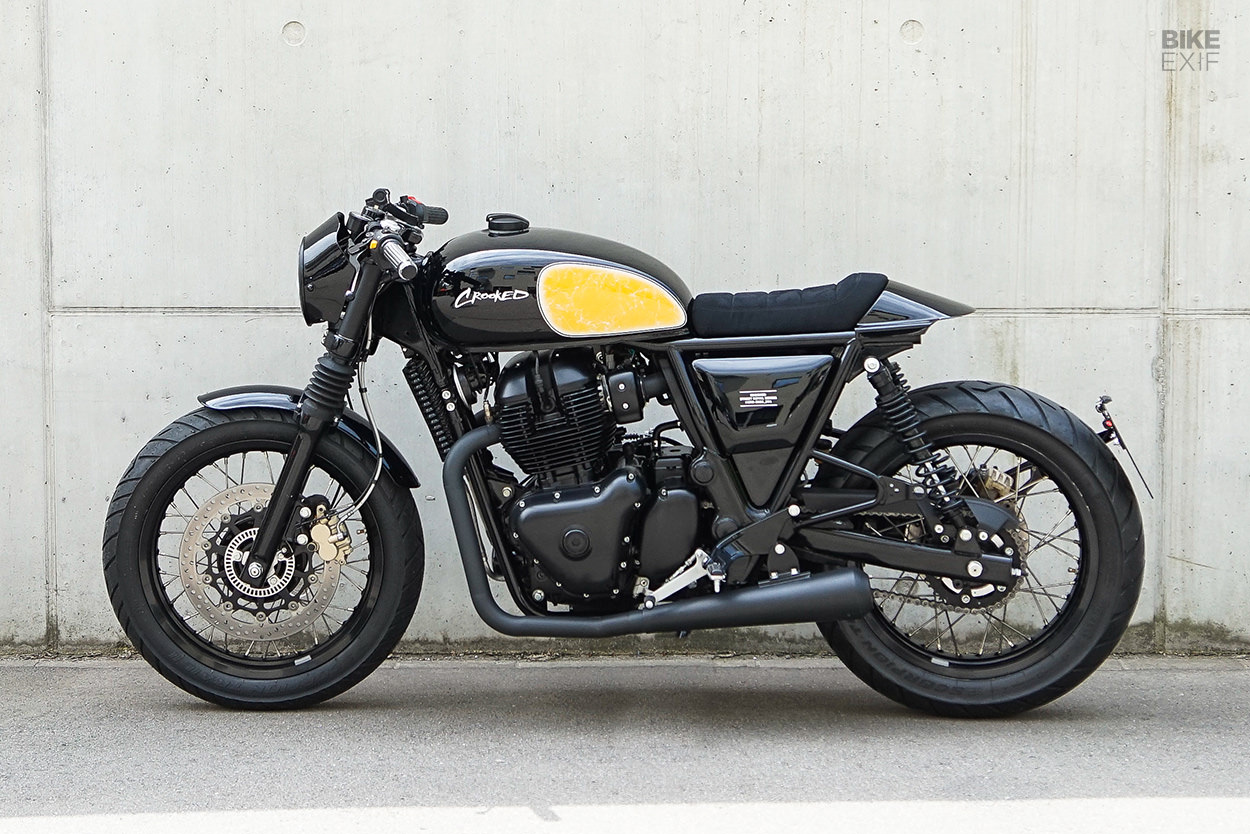 “This was also the reason for our decision to design a double series. Whether street or gravel, the bikes have been pure fun during the last few weeks of our test phase. The performance off-road is amazing, because it handles nicely through tight curves, but also has enough pull to make some dust.”

“In the street variant, the focus was on sportiness, both in and outside the city. Sub-50 hp doesn’t sound ‘sporty,’ but it can be! Winding roads, lively handling, a sporty seating position and a raw sound sounds like fun for sure.” 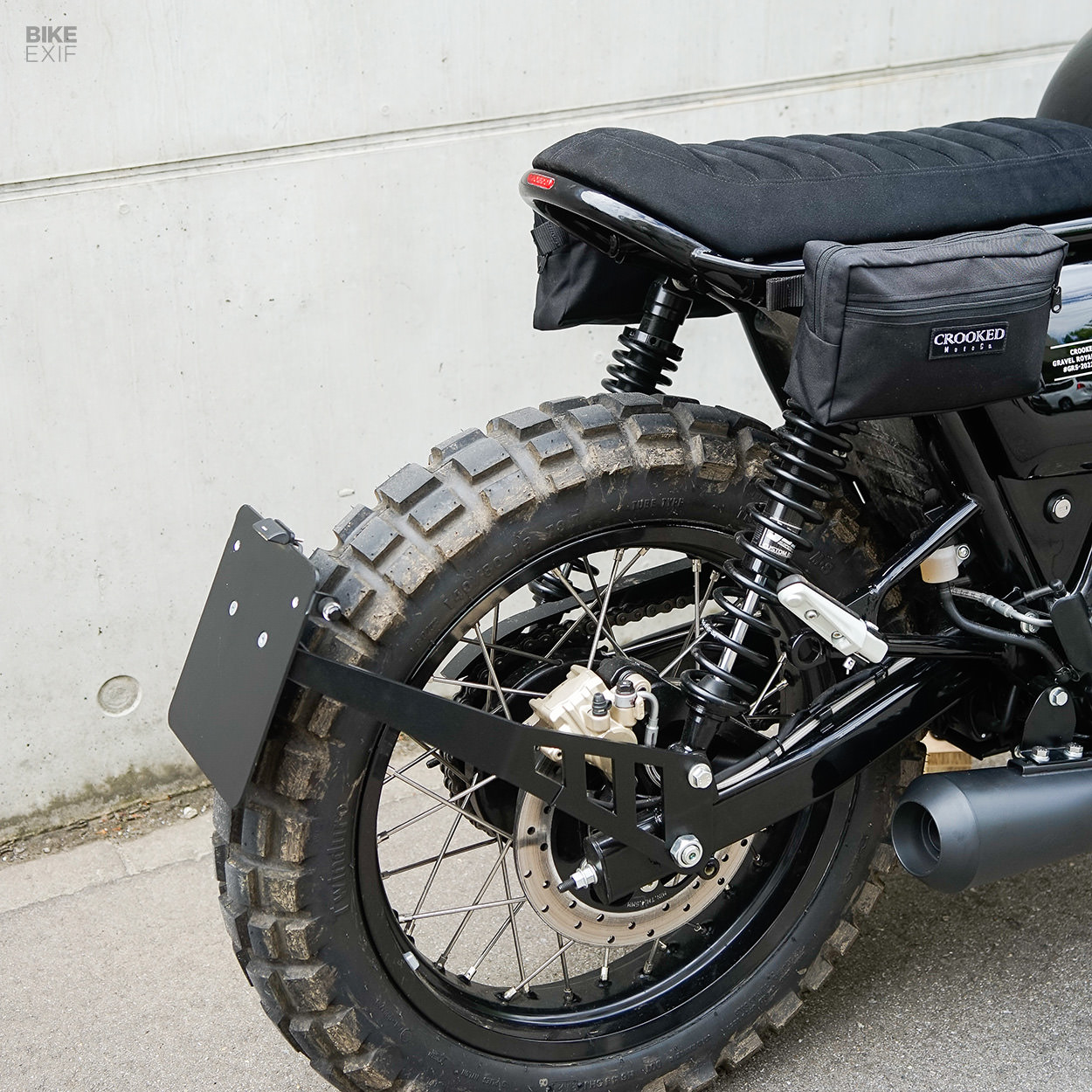 The most obvious change on both bikes are their abbreviated rear sections. In both cases, this was achieved without hacking up the Royal Enfield’s stock subframe. Instead, Crooked fabricated new rear loops that mount to the OEM frame rails.

The scrambler version’s kicked-up loop also includes attachment points for a pair of multi-purpose bags. Dominikus tells us that each bag can hold a 25 oz. water bottle, a Snickers bar and a rain jacket, and they include shoulder straps for carrying around when off the bike. 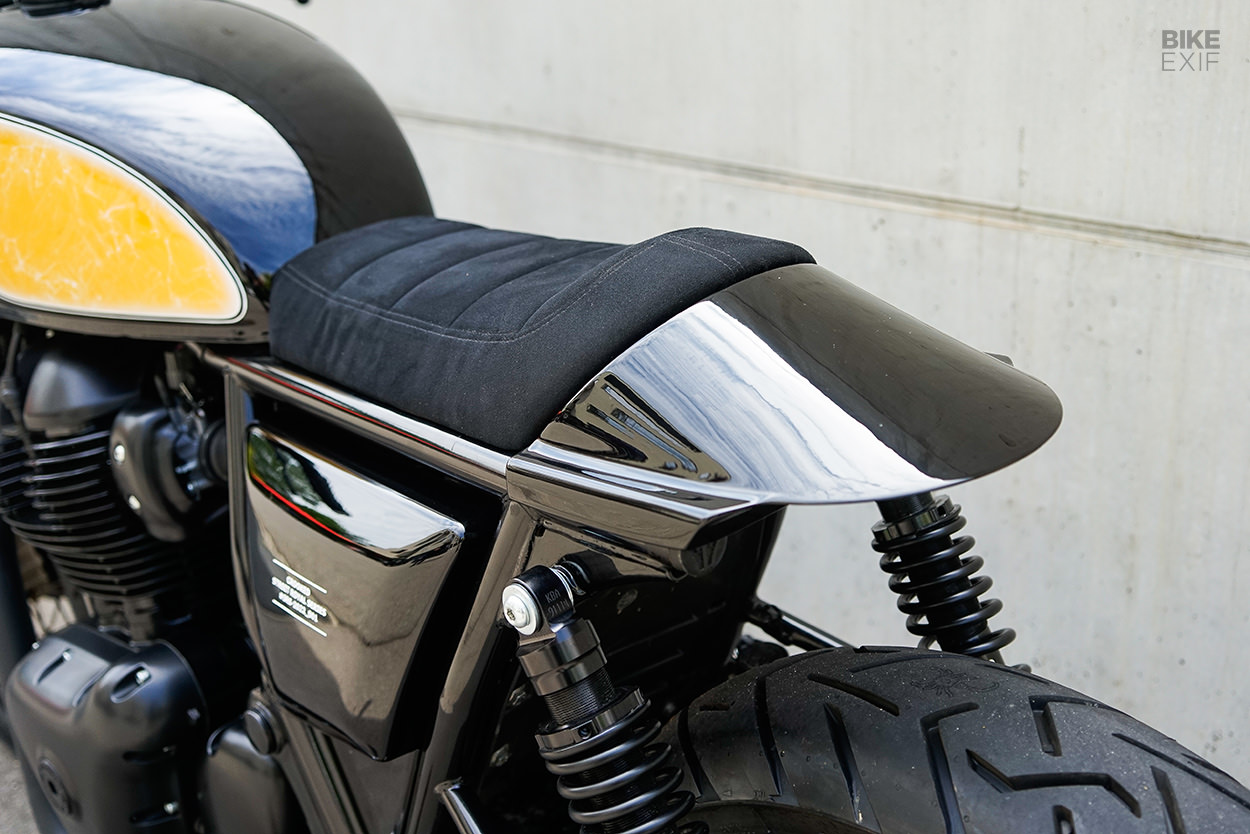 The scrambler wears a slim bench seat up top, with an integrated LED taillight out back. A pair of Motogadget LED turn signals are mounted to a custom-made license plate holder lower down.

The café racer is finished off with a different frame loop, and wears a sharp rear hump. Crooked 3D printed the rear cowl with a fiber-reinforced plastic, and treated the seat to a classy Alcantara finish. Unlike the scrambler, the café racer’s LED turn signals also act as taillights. 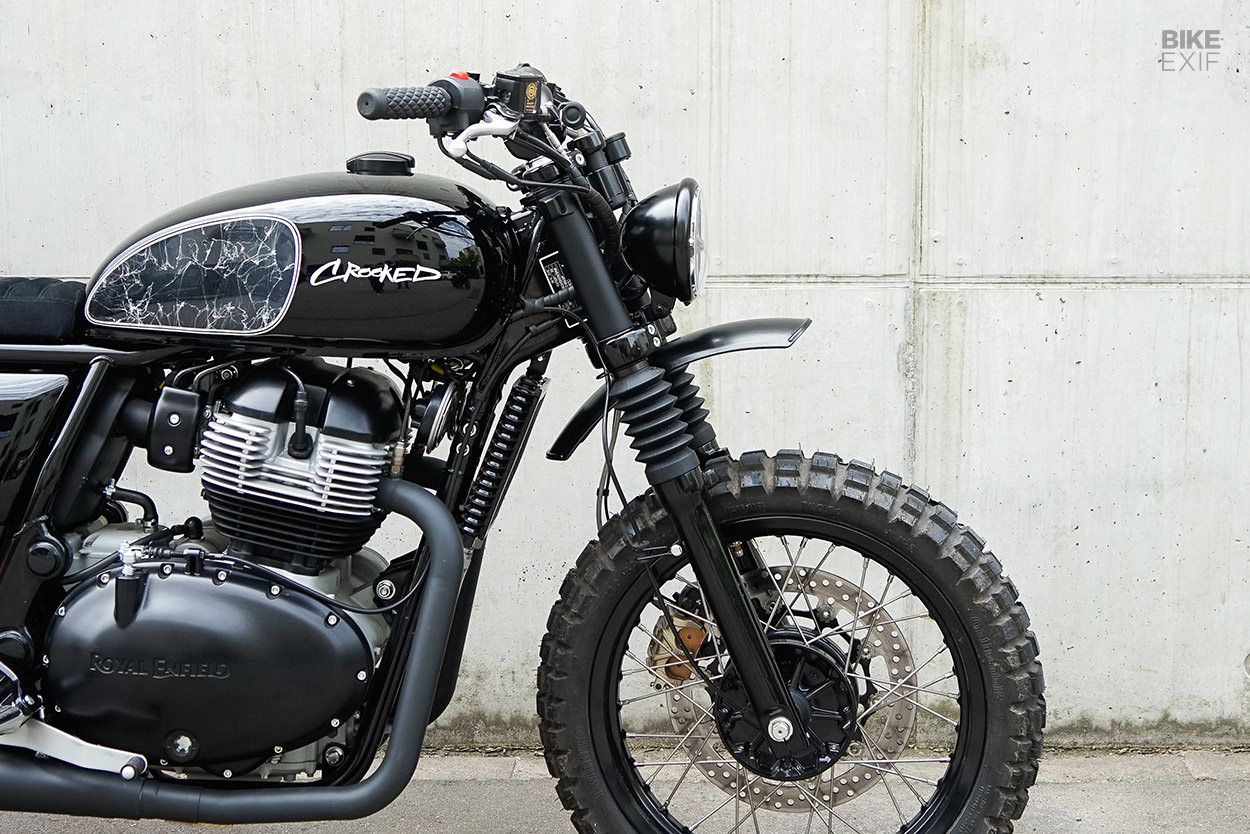 Moving to the opposite end, Crooked fitted the scrambler with an LED Bates-style headlight, and a high-mounted front fender. Everything’s attached to stock mounting points on the yokes, as is the small bracket that holds the new Motogadget speedo. Other add-ons include 3D-printed fork covers with Motoism turn signals, and Renthal handlebars with Biltwell Inc. grips.

Crooked’s work is more than just skin deep though. Modern bikes can be a pain when it comes to electronics, so they developed a special connector to plug the Motogadget speedo straight into the Royal Enfield’s wiring harness. It’s all part of their bid to make these kits truly plug-and-play. 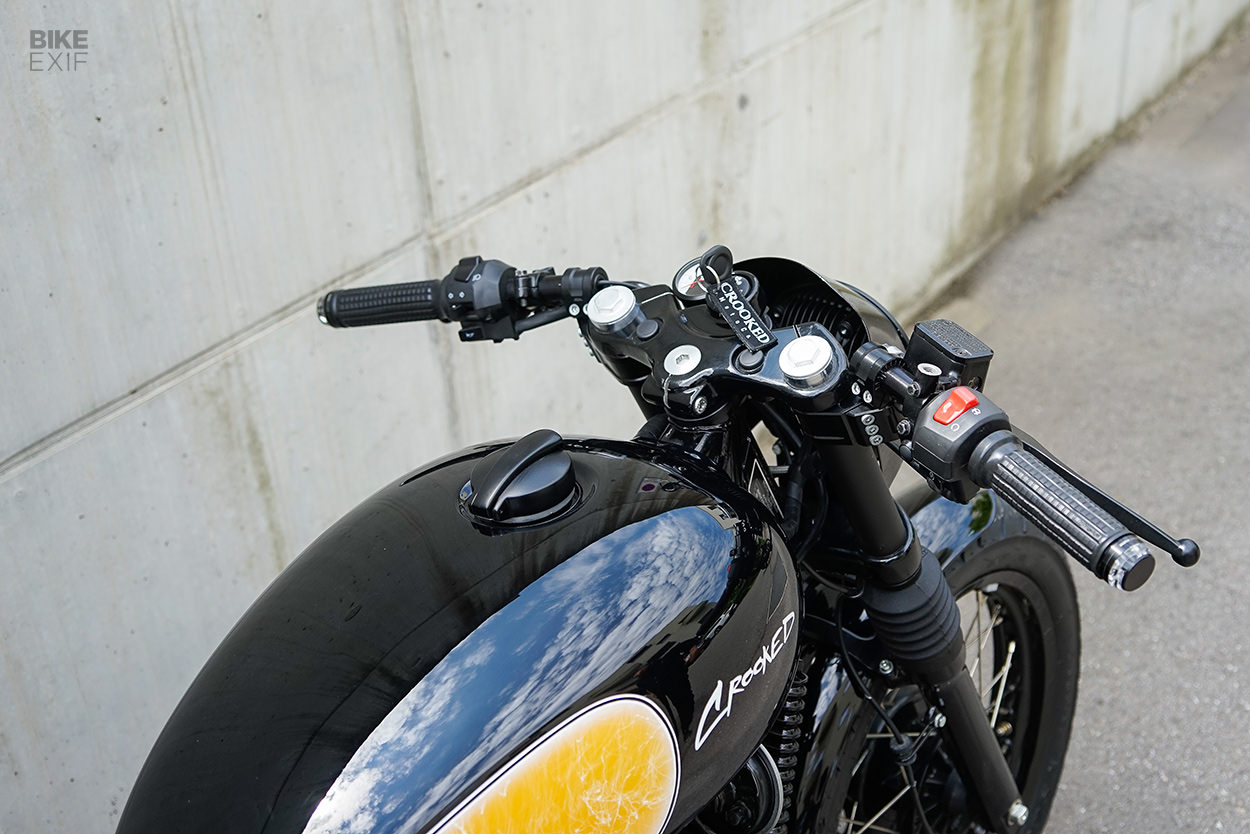 Getting the lines of the café racer perfect was important, so Crooked worked with a different headlight design here. This time, they fitted a Gazzini headlight, surrounded by a handmade aluminum nacelle.

Further back is the same Motogadget speedo conversion as the other bike, along with grips and bar-end turn signals from the German brand. ABM clip-ons round out the cockpit, with plugs to cover the original riser mount holes. 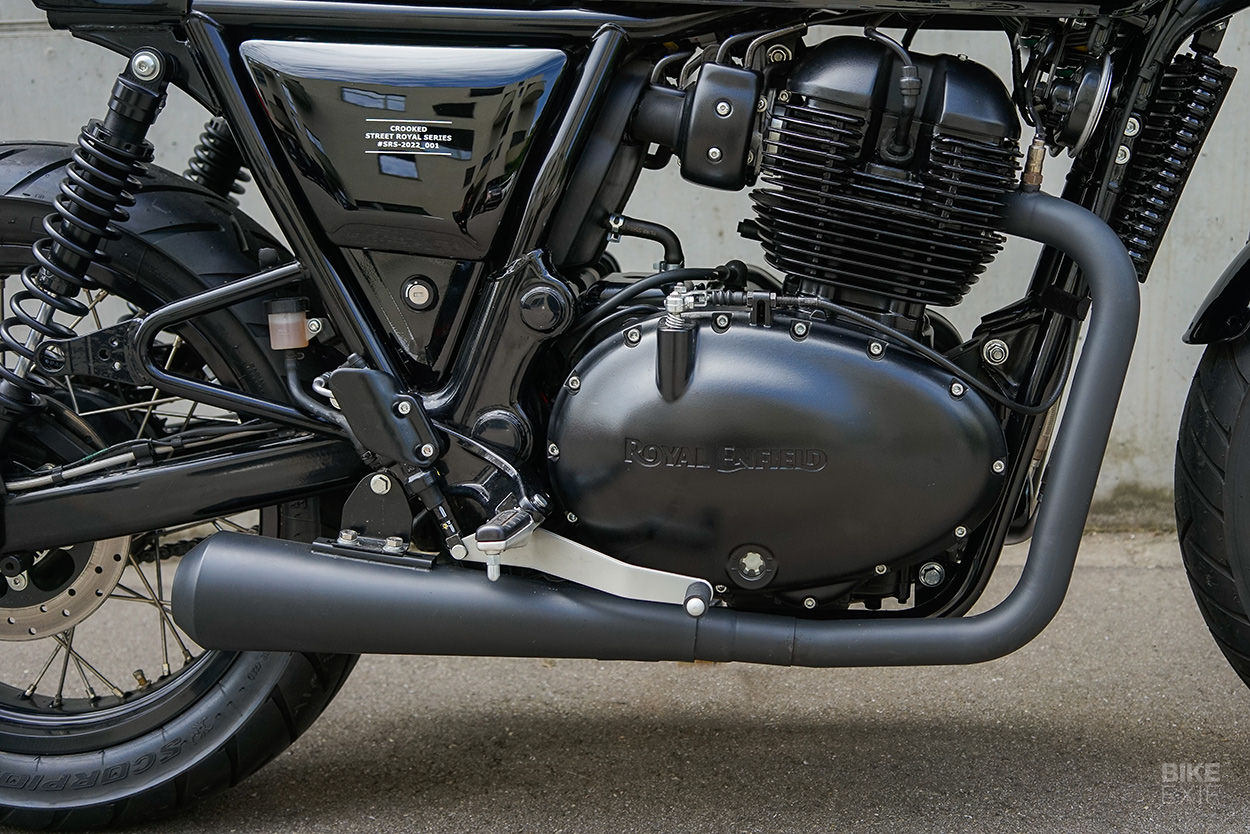 Both versions are propped up on new YSS rear shocks, with a couple inches of extra lift on the scrambler. They also share exhaust systems; a combination of custom headers and Hattech mufflers. Crooked picked Continental TKC80 rubber for the scrambler, and Pirelli Scorpion Trail II tires for the café racer. 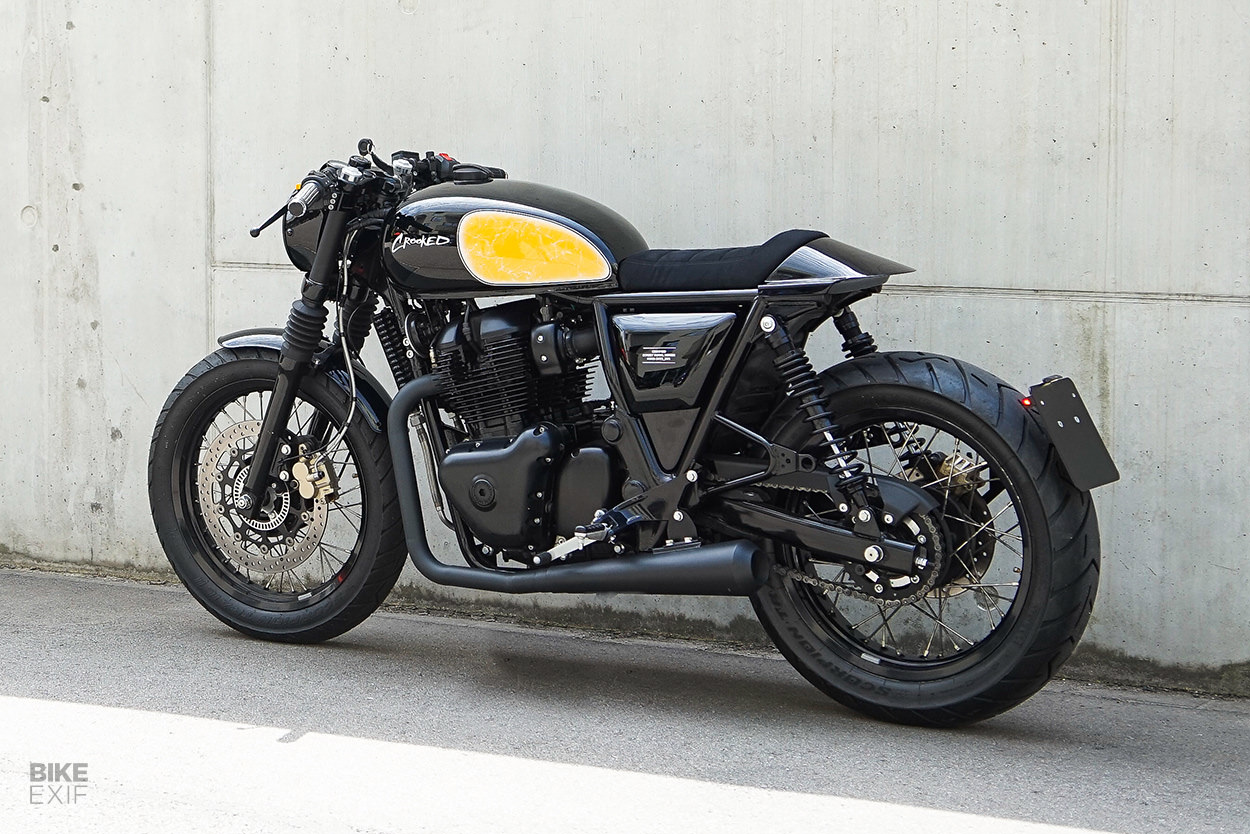 Alternatively, you can pick your favorite elements from each and build your own Interceptor. Since the donor bikes are identical, there’s infinite room to mix and match. 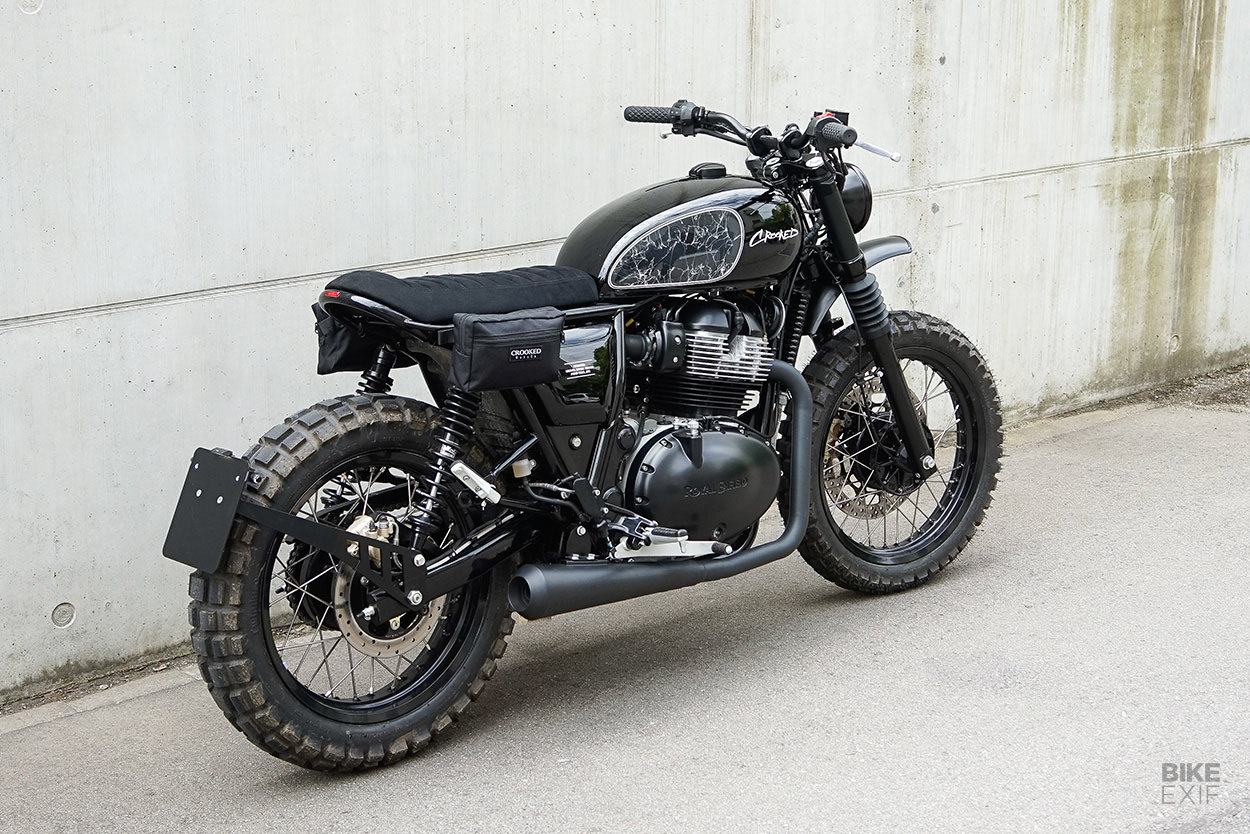 As for the understated nature of both styles, that’s exactly what Crooked were aiming for. “The focus was on riding pleasure and the simplicity to optimize. We didn’t want to build another crazy custom project which often gets dusty in showrooms.”

“We wanted to get out into nature and have fun, without the fear that something could break.” 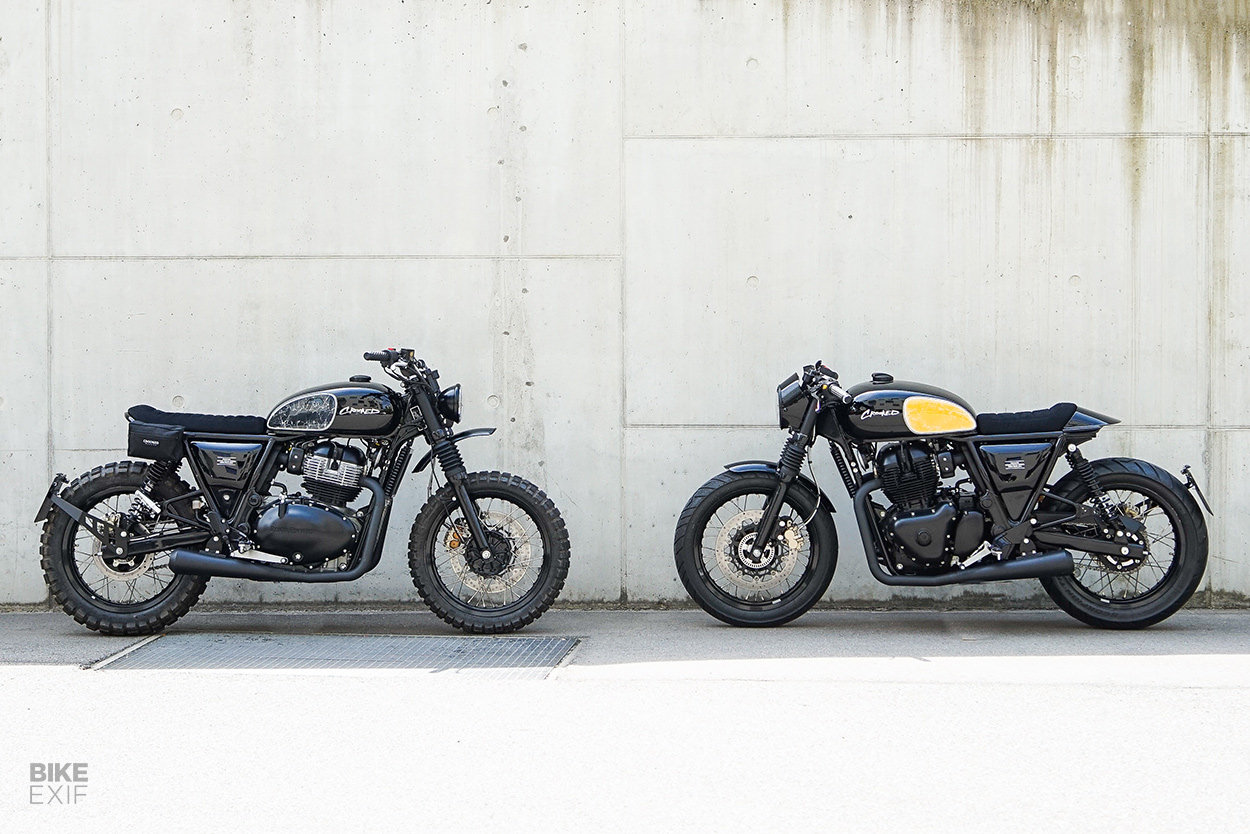