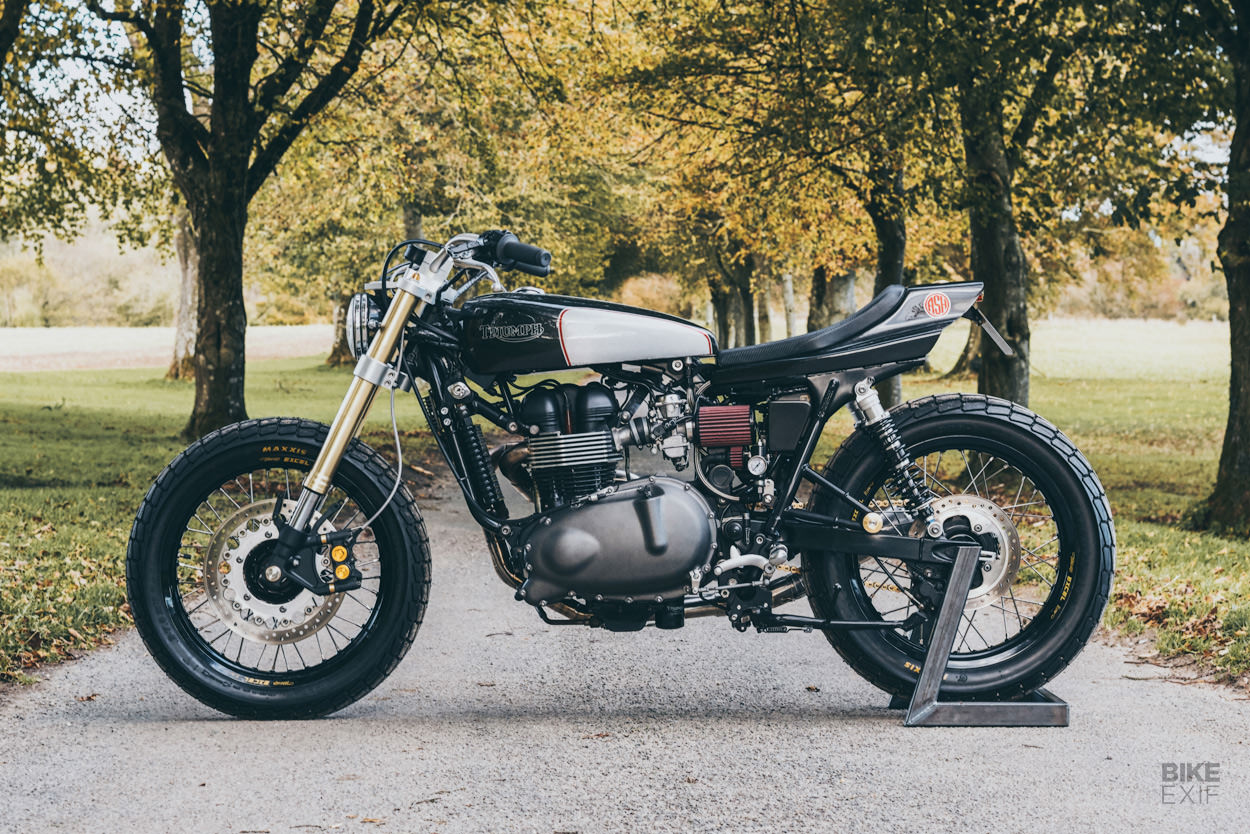 Some established custom shops are so consistent, you immediately know that anything they build is going to be good. But the scene is rife with newcomers too. And we love it when a new shop hits it out the park on their first try.

The three guys behind ASH Motorcycles have a wealth of experience between them, but they’ve only been operating as a unit since last year. This Triumph Thruxton-based street tracker is their debut, and it’s an absolute showstopper. 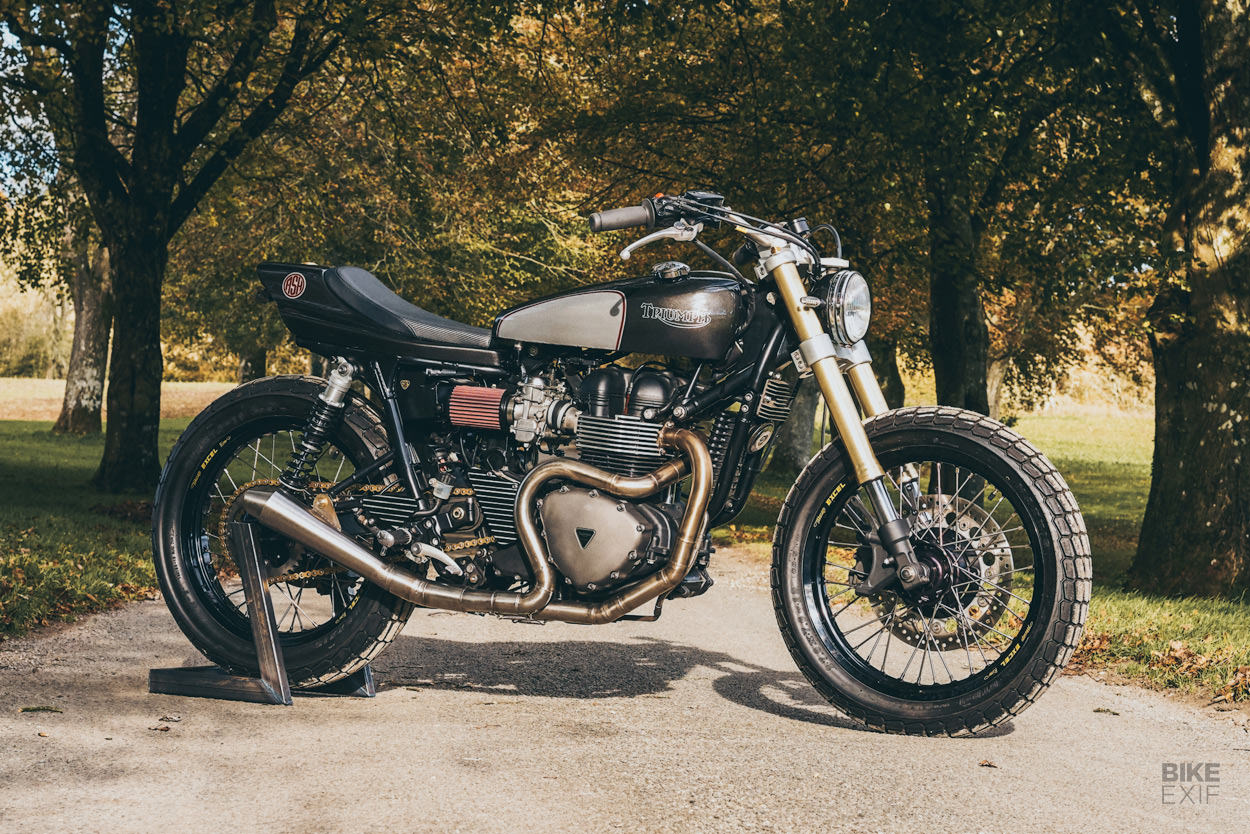 Based in Dorset, England, the team is made up of Tim Abbey, Jez Speed and Chris Hill. (Add the first letters of their surnames together, et voila.)

Tim was a professional touring musician based in London—until the pandemic wrecked his industry. So he spent time working with his friends at the UK shops Untitled Motorcycles and Bolt London, sparking a desire to build his own custom motorcycles. Chris is a retired aircraft engineer, with a workshop at the Old Yarn Mills in Sherborne that’s stacked with equipment. 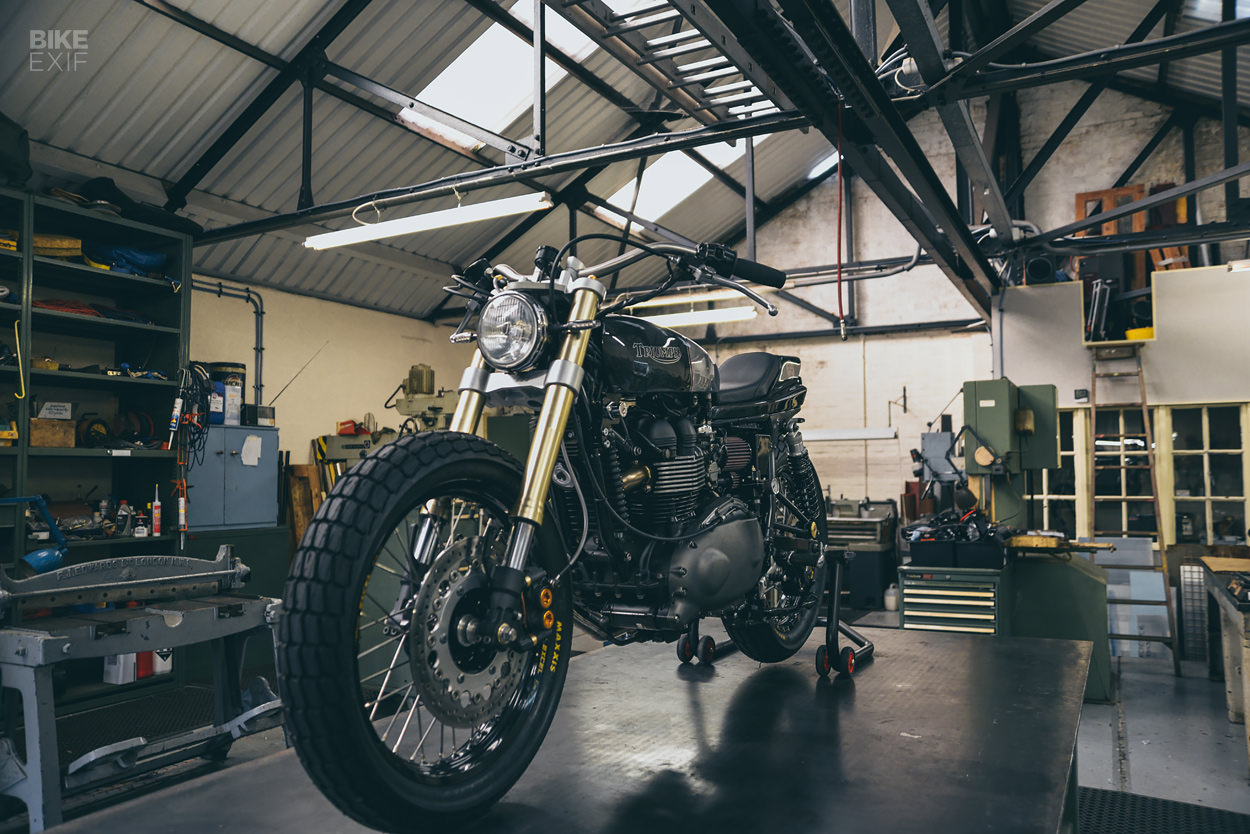 Jez is into restorations, is friends with Tim, and has a workshop next to Chris’. All three love motorcycles—so once Jez had made the intro, things started snowballing.

Their first meeting resulted in Tim learning how to TIG weld, and pretty soon he was being schooled in machining and fabrication. So he offered up his clean Triumph Thruxton 900 as the donor for ASH Motorcycles’ first build. 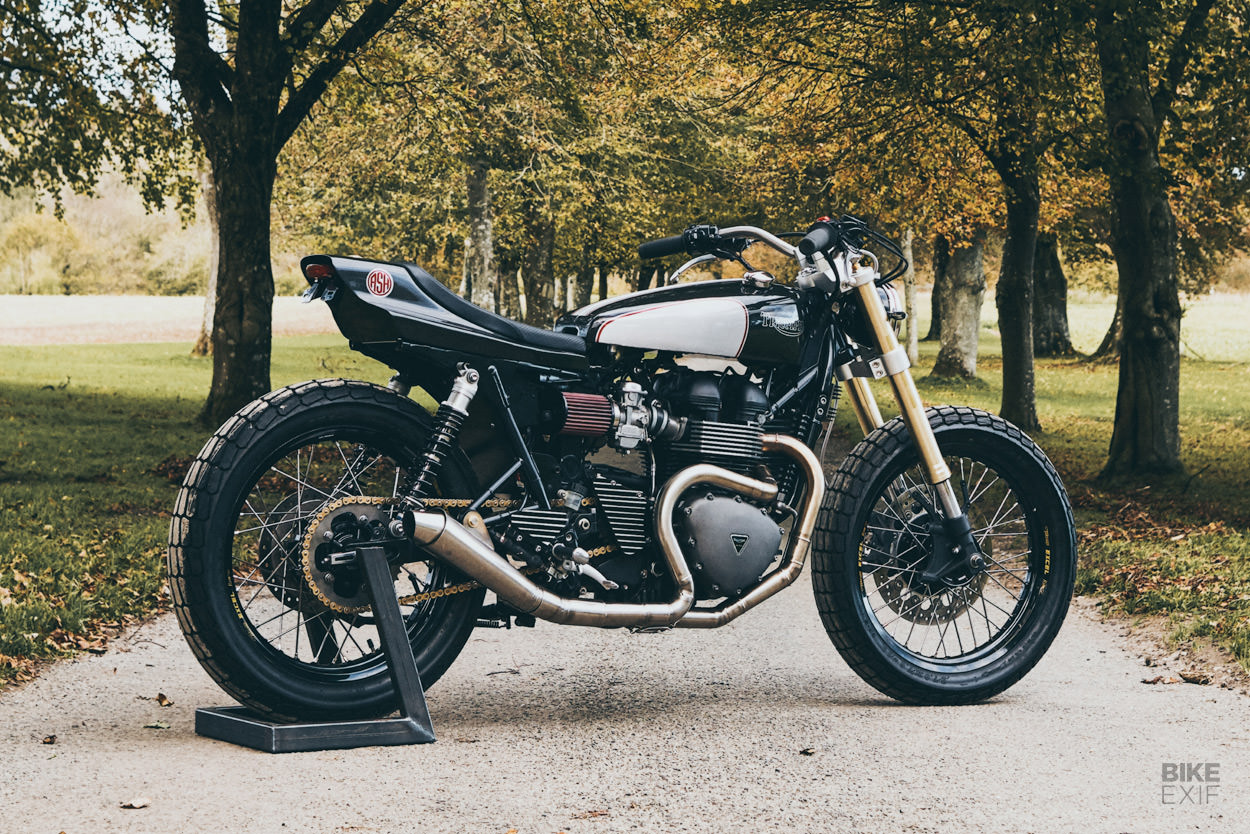 “It’s a well-known, done-to-death motorbike on the custom scene,” says Tim. “The challenge to make something interesting out of the Thruxton began with inspiration from flat track racing; the style, ergonomics and stance informed the initial concept to make a street going bike with attitude.”

The guys started up front, where they manually machined new yokes to hold a set of Yamaha R6 forks. “Perhaps the most time consuming part of the build,” says Tim. “Starting with two blocks of billet aluminum—and no CNC machine in sight!” 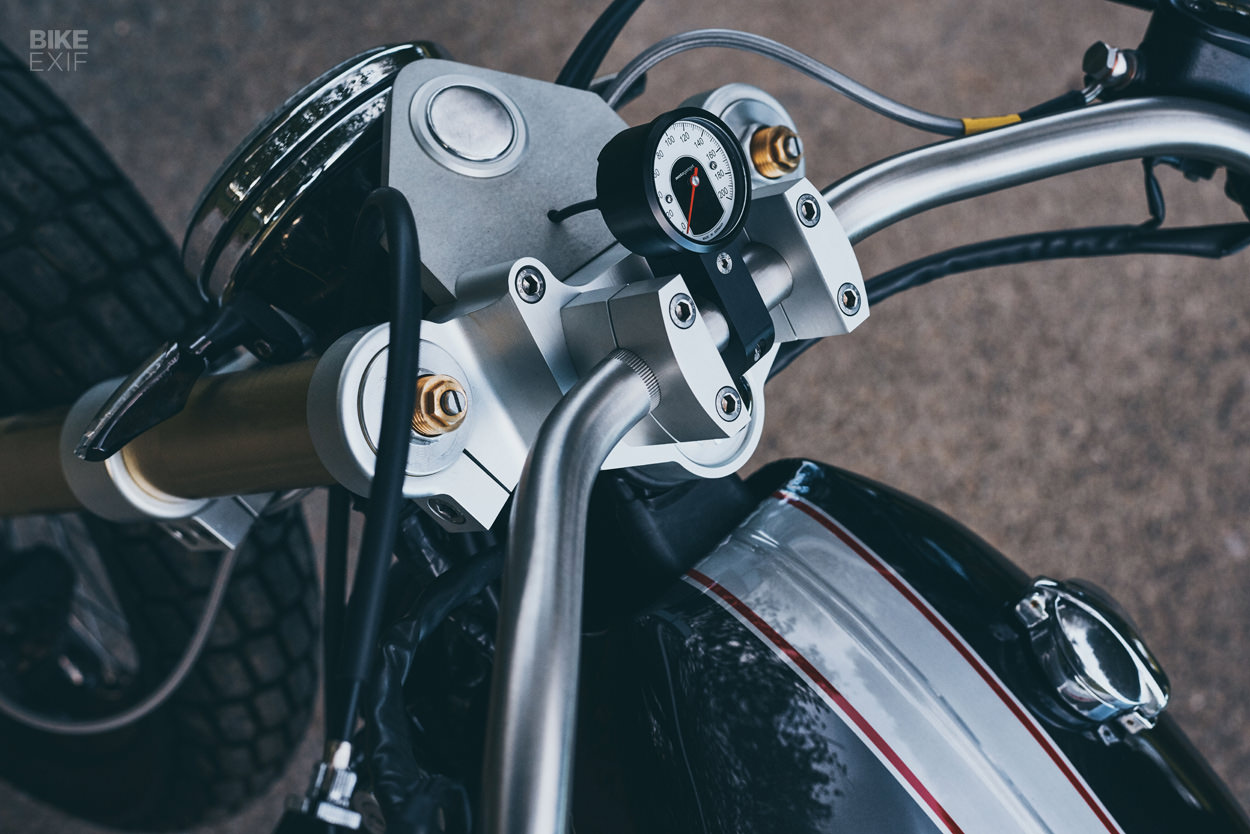 The top clamp includes an extension to mount a Harley Sportster headlight, and risers that hold a set of tracker handlebars from BAAK in France. A tiny Motogadget speedo sits on a custom-made, bar-mounted clamp.

A pair of Öhlins shocks handles suspension duties out back. The Thruxton now rolls on 19” Excel rims, laced to Talon hubs and wrapped in Maxxis flat track rubber. The front brake’s been swapped out for one of the R6 units—but the right brake mount and fender brackets have been saved for potential future upgrades. 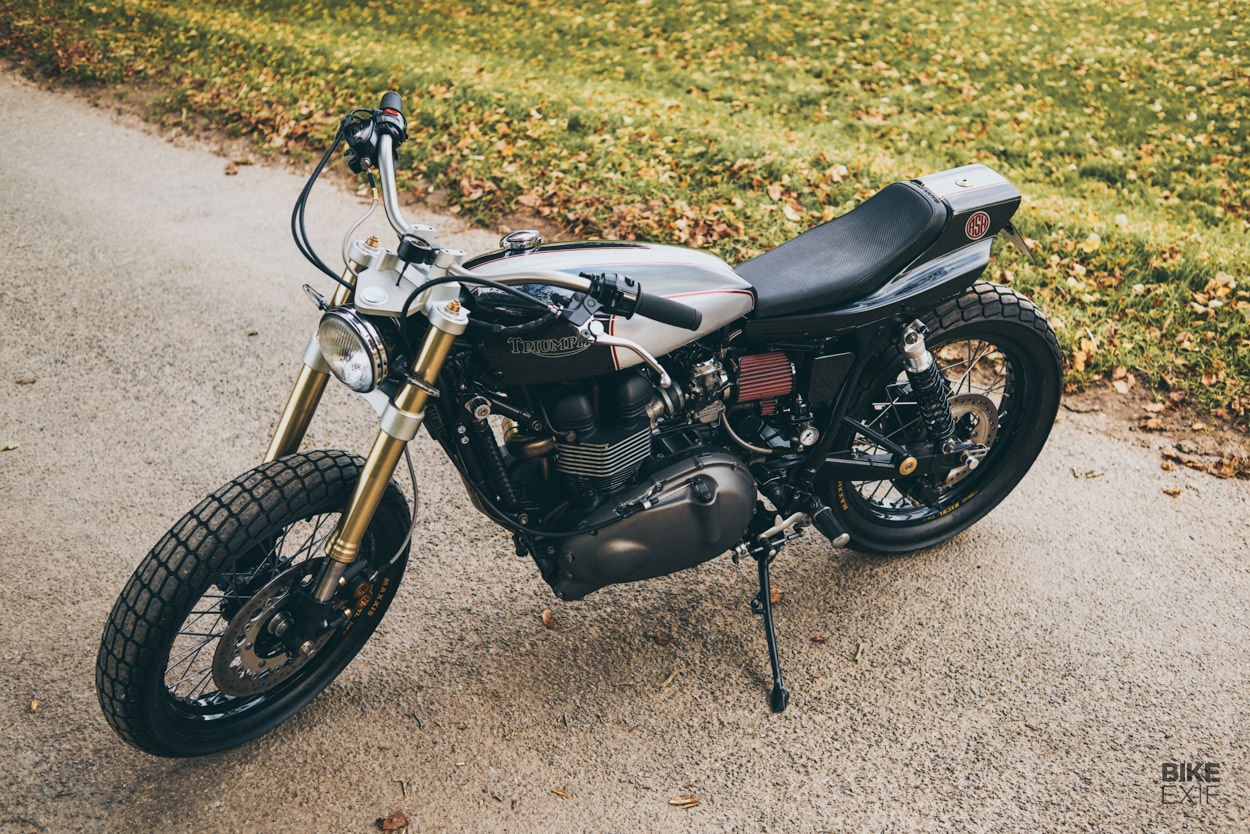 Next, the crew moved onto building a new fuel tank. They took inspiration from the iconic Trackmaster tanks of old to get the flat track vibe just right—but also made sure the tank would hold enough fuel for everyday use. A wooden buck was made to shape it over, with local English wheel guru Richard Marsh lending a hand.

It’s a tidy piece of work, garnished with a bead running down the middle, and a classic Monza gas cap. 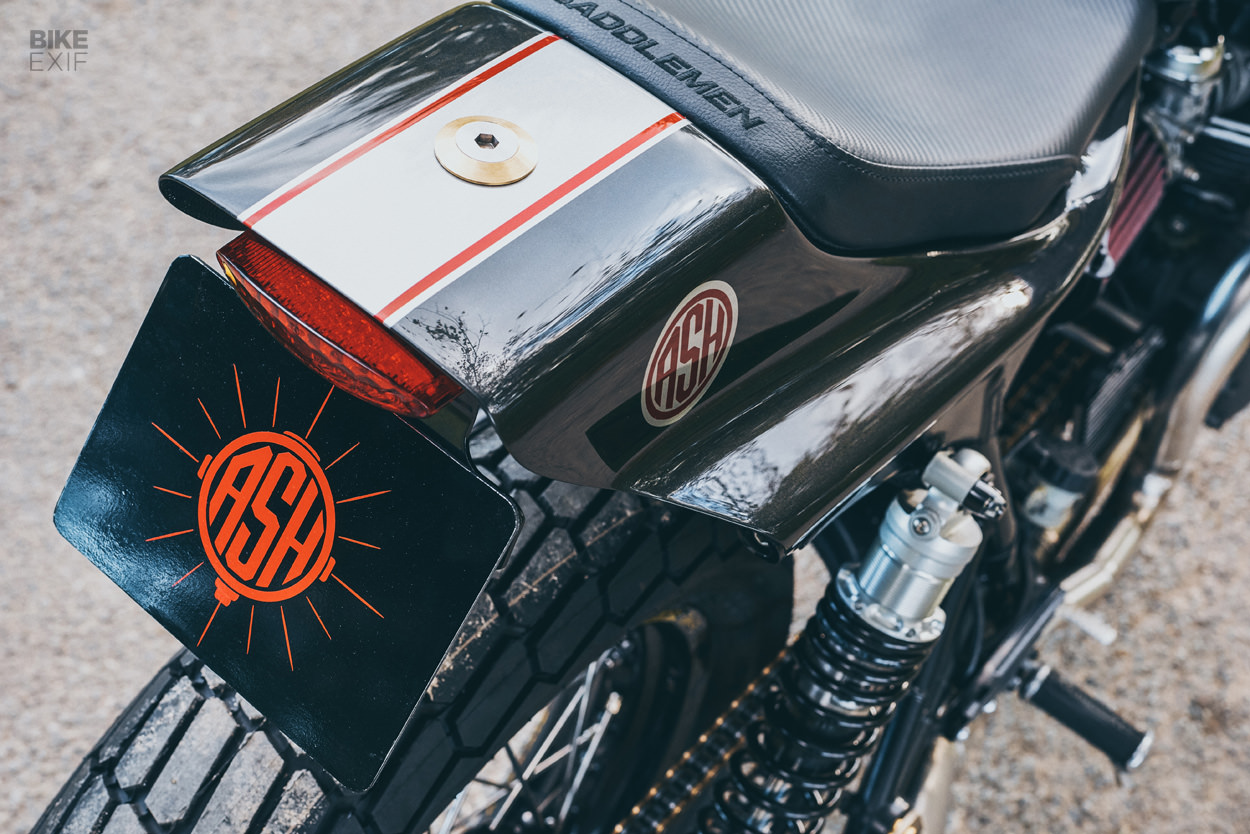 Ace Fiberglass helped ASH create a bespoke tail section for the build. The subframe’s been modified to match it, and it’s capped off with a pad from the US seat specialists Saddlemen. The taillight’s tucked in behind it, and there’s a stealthy inner fender lower down.

There’s also an electrics box down there, and an external fuel pump; a necessity on this build, since the OEM unit wouldn’t fit inside the new tank. ASH used Earl’s Performance lines and fittings, and installed a Twin Power air box eliminator kit (with a new fuel map) to make room for everything. 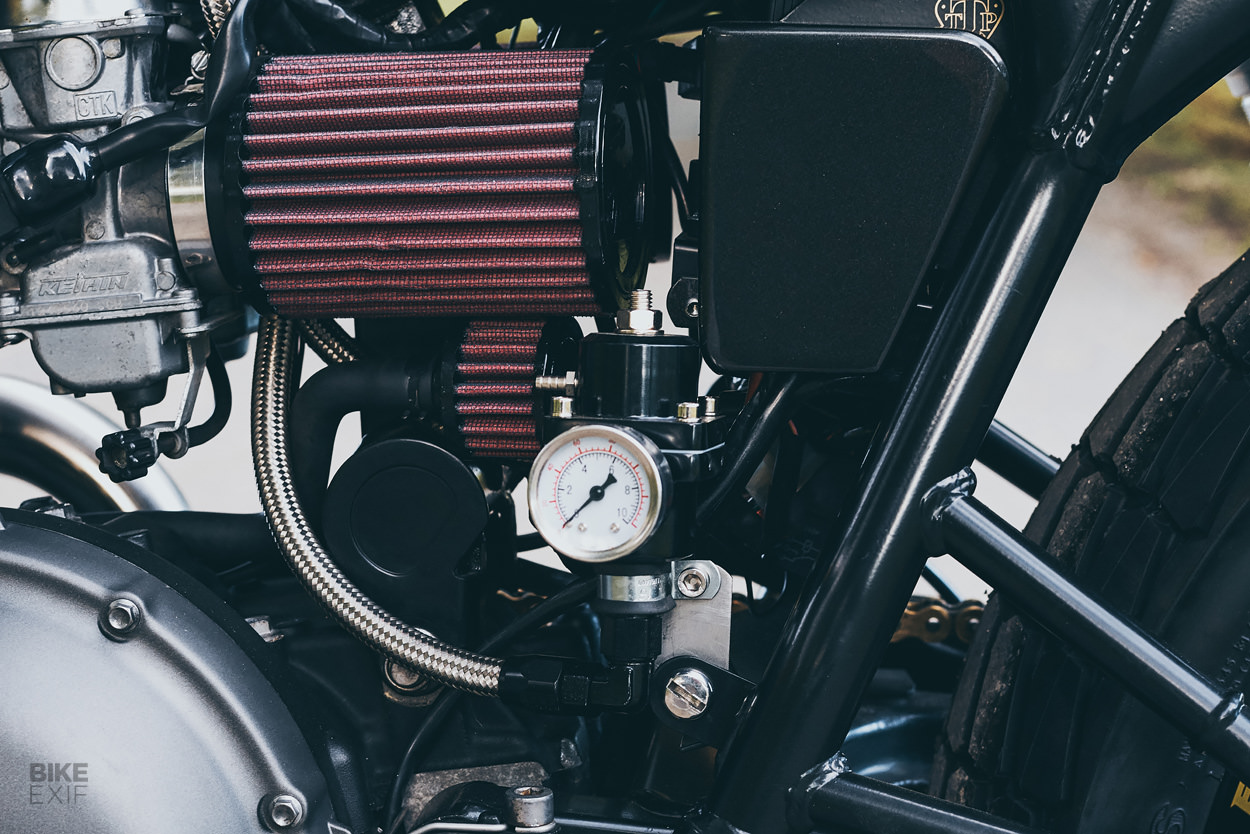 Smaller details include neat little rear turn signal brackets to hold a pair of Motogadget LEDs, and finned heel and sprocket guards. The frame’s lower rails have been removed too—turning the motor into a stressed member, and giving the Triumph a more aggressive vibe.

The two-into-one exhaust is a TIG-welded stainless steel affair, and reportedly sounds “loud and throaty.” 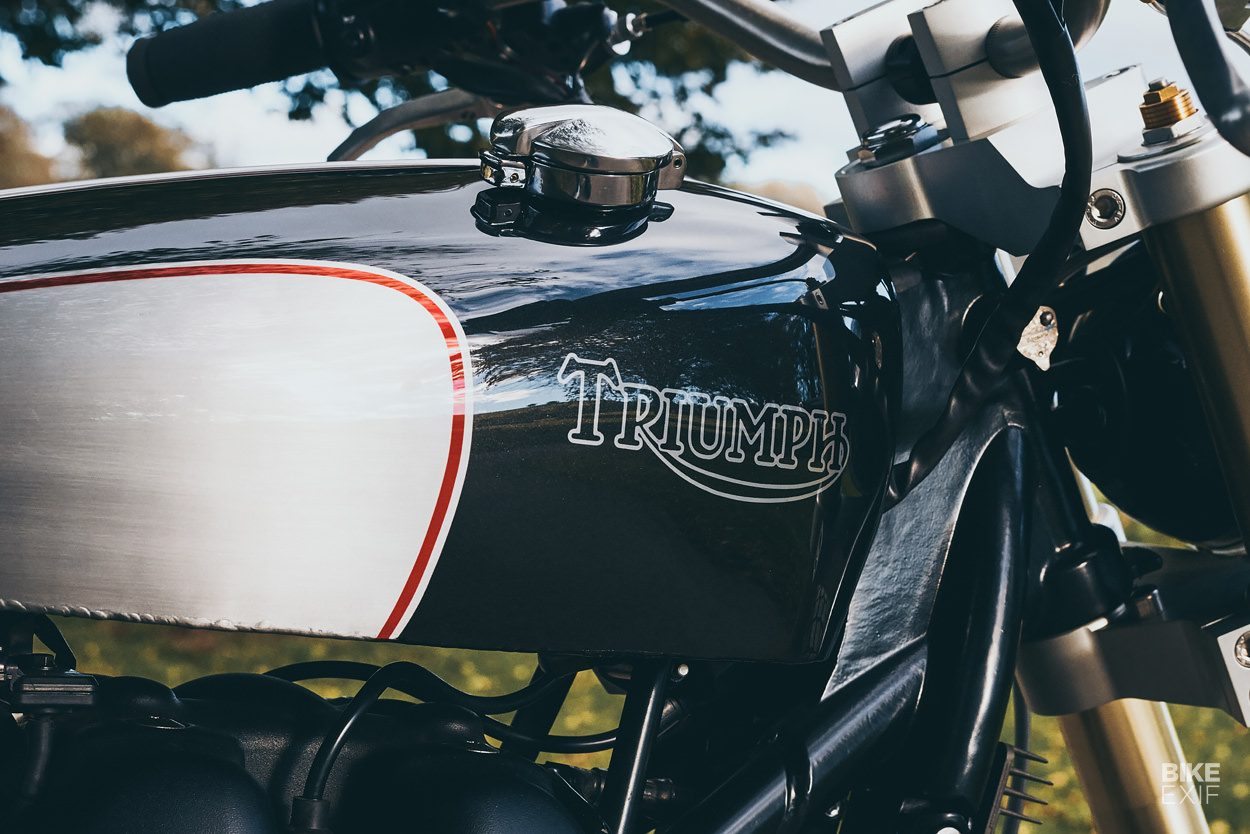 James King laid down the paintwork on this project—a timeless combination of bare aluminum and deep graphite paint, with candy red pin striping. And to avoid an all-black look on the mechanical bits, ASH opted for a dark grey Cerakote finish on the engine cases. Adorned with throwback Triumph logos, it’s the perfect livery for this textbook street tracker.

ASH Motorcycles have just one problem now: with the standard already set so high, they’ll need to really deliver on their sophomore release. 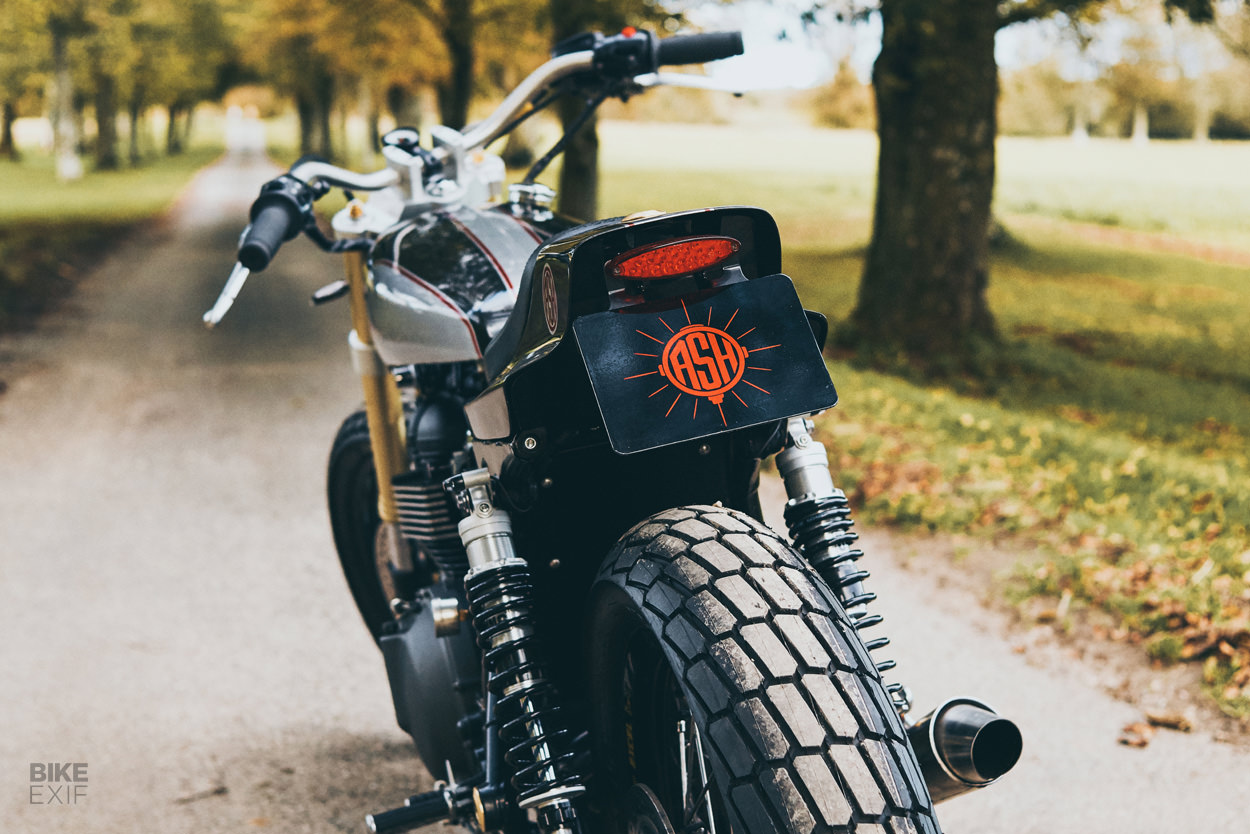