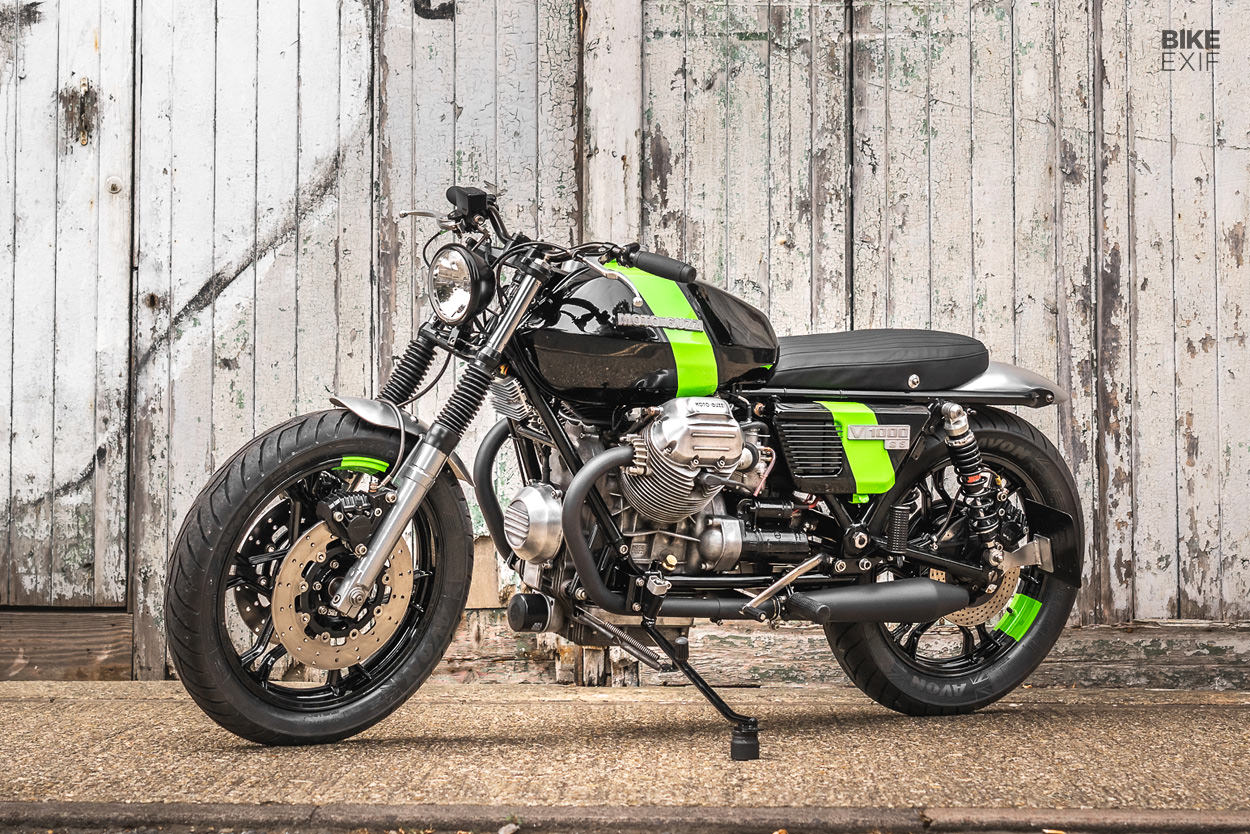 Tom Simpson is a busy man. As the only pair of hands at Foundry Motorcycle, he’s usually in the workshop six days a week, with the next two years of his diary blocked off. So when a project came in with a limited budget and an eight week lead time, he had to change tack.

The donor bike was a 1979 Moto Guzzi V1000 G5 that had been sourced, unseen, from a dealer in the UK, by a client in San Francisco. The bike was shipped directly to Foundry in West Sussex, with a short brief that immediately turned Tom onto the idea of doing a restomod, rather than a more extreme custom job. 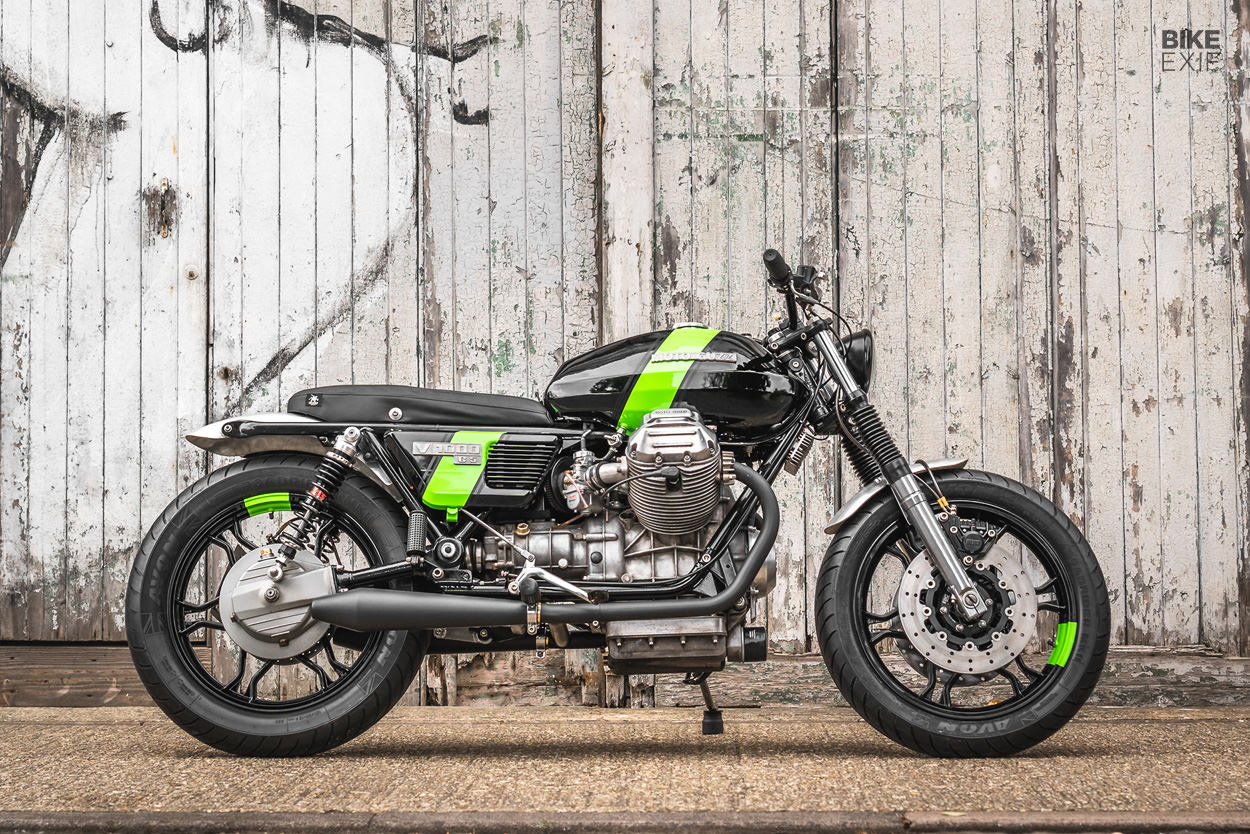 “He wanted a short list of parts fitted, and everything black,” Tom tells us. “Drilled discs, a new ignition switch and the removal of the original seat and mudguards. ‘Clean as possible restomod’ was my first and favorite idea—but having not built a black bike in 10 years, I needed to inject some color.”

“The restomod approach was very much a result of deadline and budget. It was actually quite refreshing, I haven’t turned a bike around this quickly in years and I’m really pleased with how effective the changes are.” 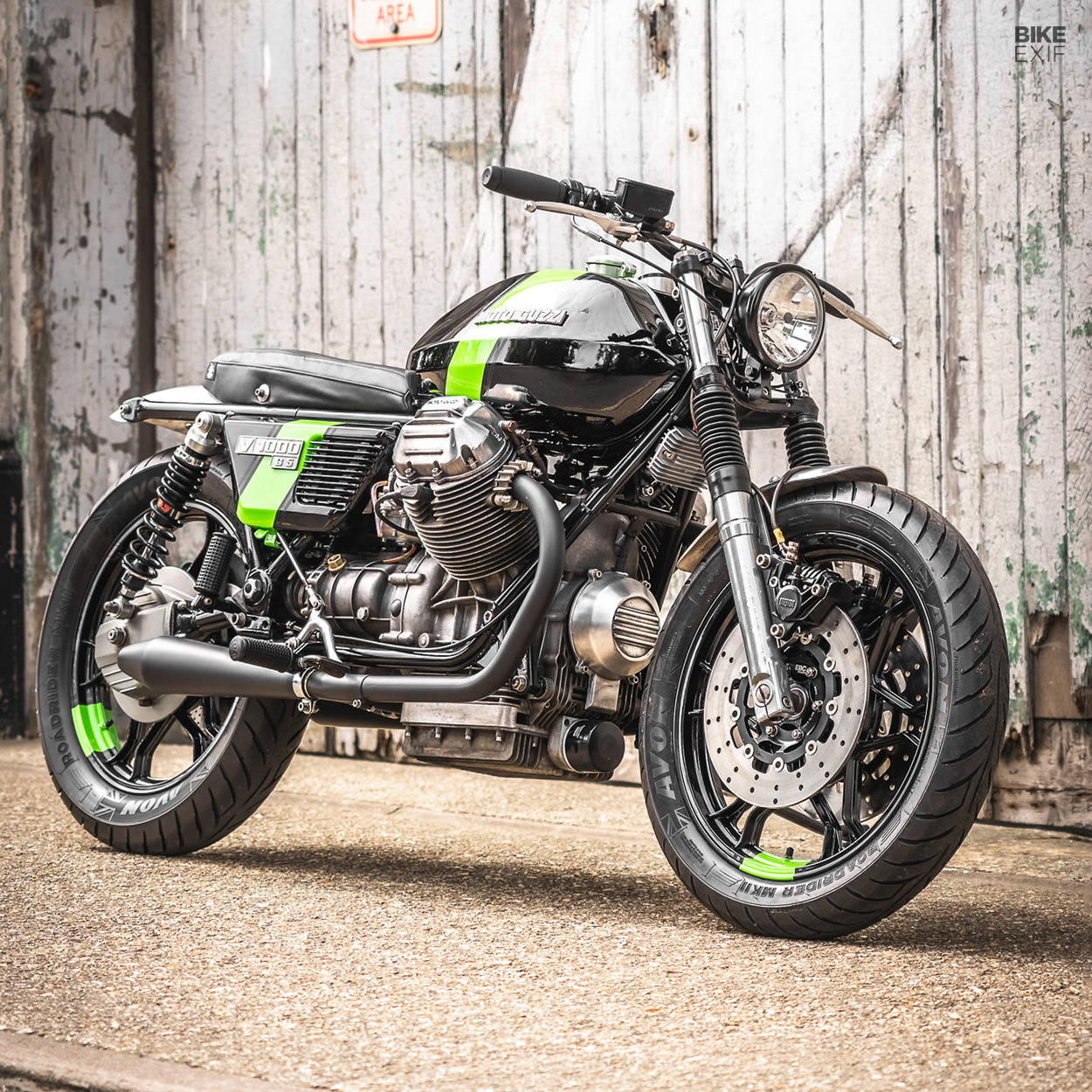 Despite the Guzzi’s neat appearance, the job wasn’t exactly a walk in the park. The client only had photos and a description to go on when he bought it, that apparently employed a lot of poetic license. “It was previously the recipient of a very poorly executed restoration, and a comical (‘professional’) rewire,” says Tom.

“From the off the engine and gearbox felt solid, but out of tune. Four wildly different valve clearances on an engine where they’re supposed to all be the same, the clutch arm clashing with the box, and carbs fresh out of the box but never actually setup. Once this had been attended to it proved to be a trusty lump.” 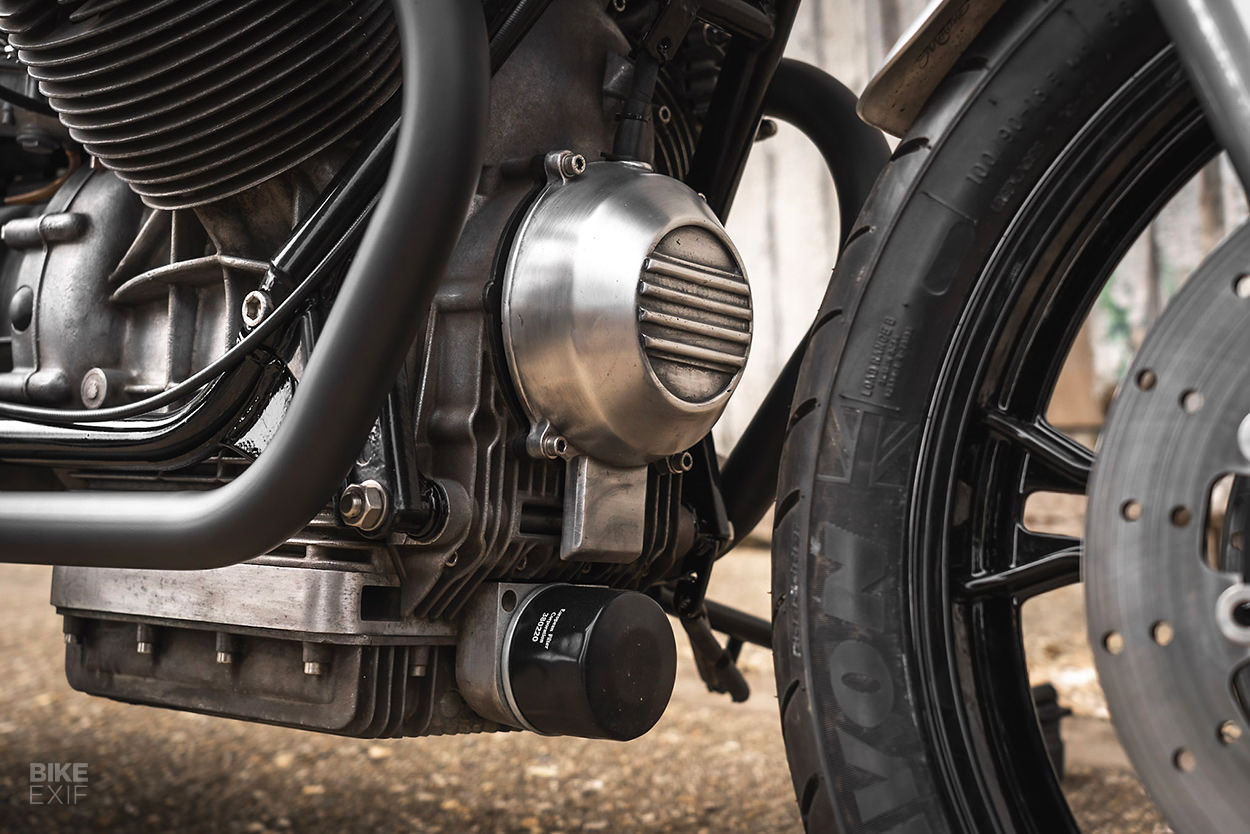 The motor breathes through the newly-set Mikuni carbs via a pair of K&N filters. Tom installed a new external oil filter too, with a sand cast Foundry generator cover that he’ll be offering for sale soon. The exhaust is pretty straightforward by his standards: the stock headers were blasted and matched to a pair of reverse cone silencers, then everything was finished in black Cerakote.

Another rewire was done with a new Silent Hektik digital ignition and coils, and spread of Motogadget bits—including a mo.unit control box, a keyless mo.lock system and a small digital speedo. The LED turn signals are from Kellermann, with the rear units doubling up as taillights. 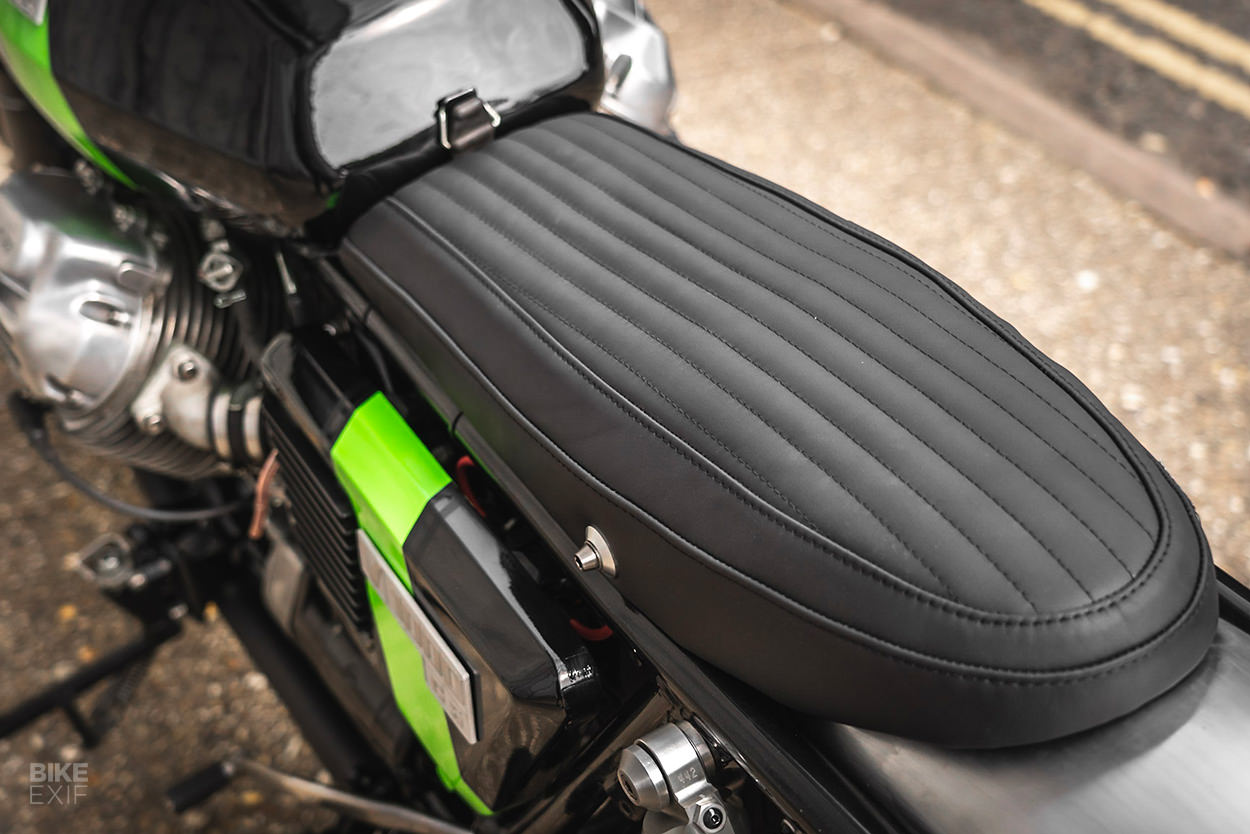 Tom rates the stock G5 as “a pretty ugly bike,” so he also ditched the seat, fenders and most of the cockpit. He kept the OEM fuel tank though, but modified it to take a Monza gas cap, and fabricated a bracket to mount the speedo in front of it.

Tom shaped up a new seat too, then had it upholstered in hard-wearing black nappa vinyl by Trim Deluxe. The frame is stock, but had to be re-painted in places thanks to an overabundance of chrome powder coat from the previous job. The fenders are Foundry stock; aluminum items that weight considerably less than the originals. 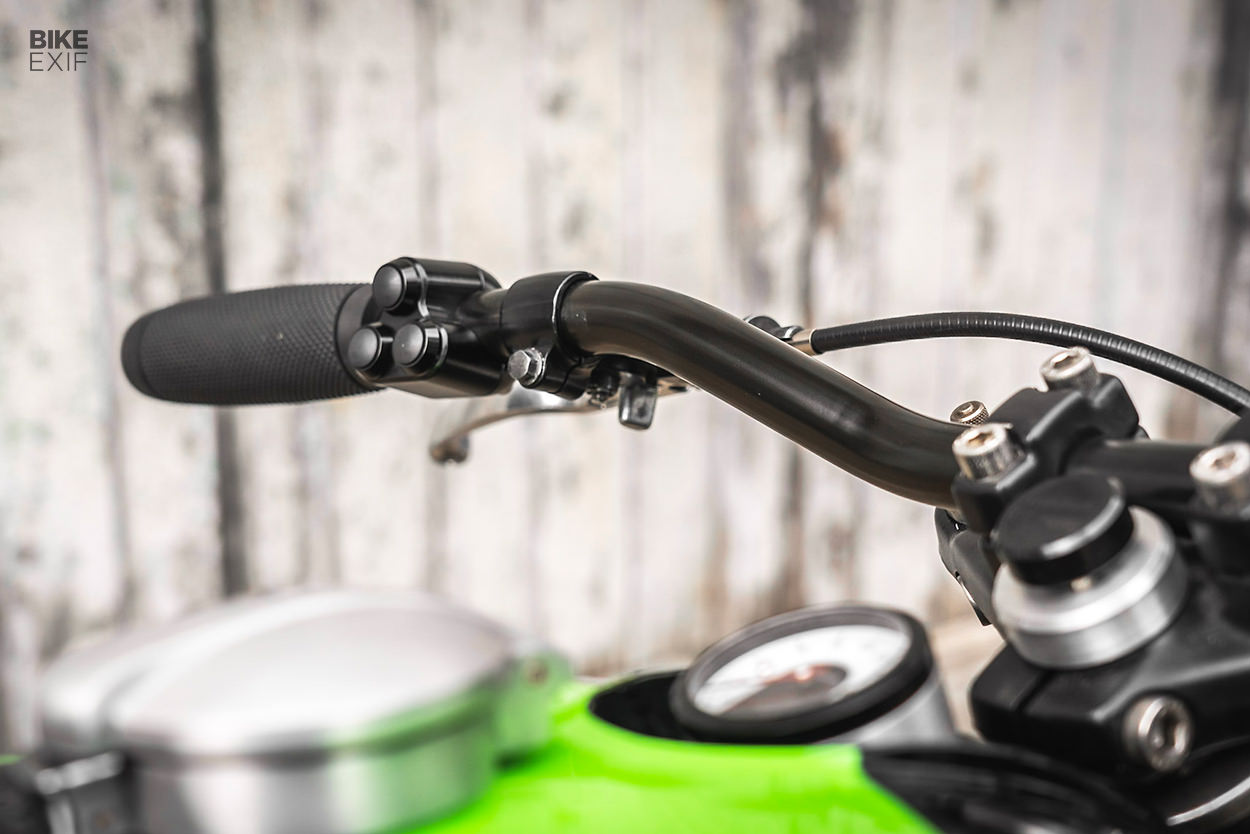 Up in the cockpit are Biltwell Inc. Tracker bars with Motone switches, a new throttle, and Honda CBR levers with custom cables. A small Bates-style headlight finishes off the front end.

The Moto Guzzi’s running gear is a mix of refurbished and new. Tom serviced the front forks, but replaced the rear shocks with a pair of YSS units. The front brake calipers were overhauled, then matched to EBC discs and braided hoses from HEL. 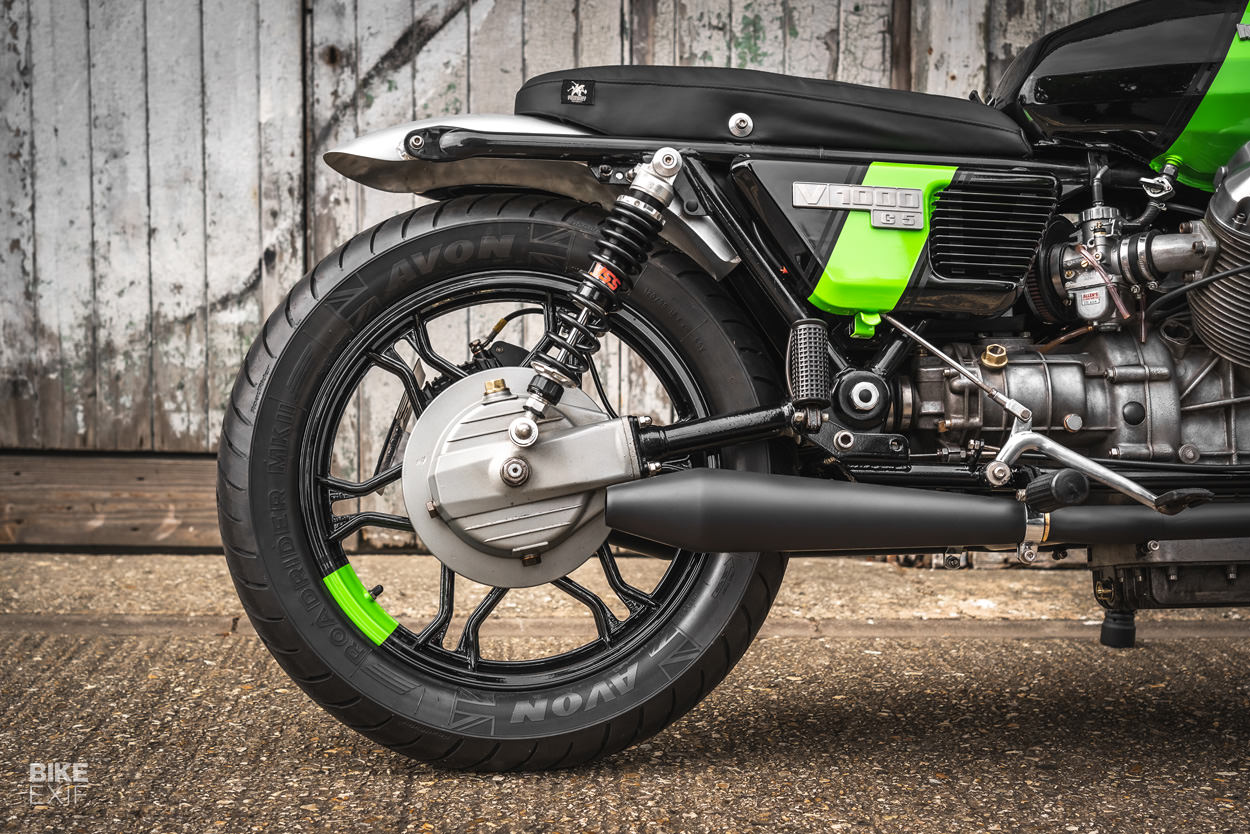 S. Jago Designs laid down the paint, which took inspiration from other Guzzi models from the 70s, but with a more vibrant green. “The wheel stripes look great when the bike is rolling,” says Tom, “and especially cool as they rotate backward at speed.”

The V1000 was originally meant to attend Moto Guzzi’s 100th anniversary party at Mandello, but that event was sadly postponed. Since the bike was ready and the planning had already been done, Tom’s client decided to go ahead with a road trip anyway. 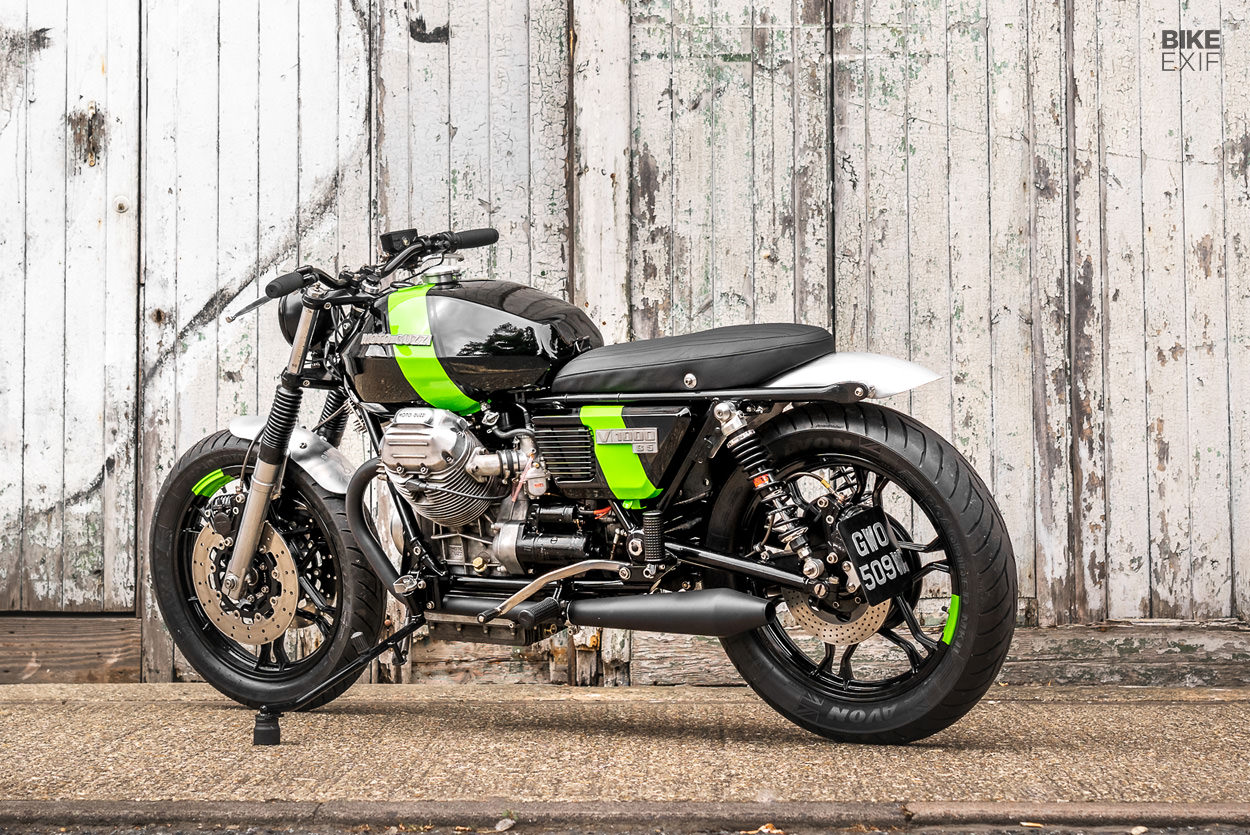 “He flew to the UK on the Friday, collected the bike on the Monday and was in France on the Tuesday. One week and nearly 2,000 fault-free miles later, bike and owner returned to the UK needing nothing more than a good scrub up, before another attempt to celebrate Guzzi’s 100 again next year.”

A custom bike that looks good and can go the distance? Sign us up. 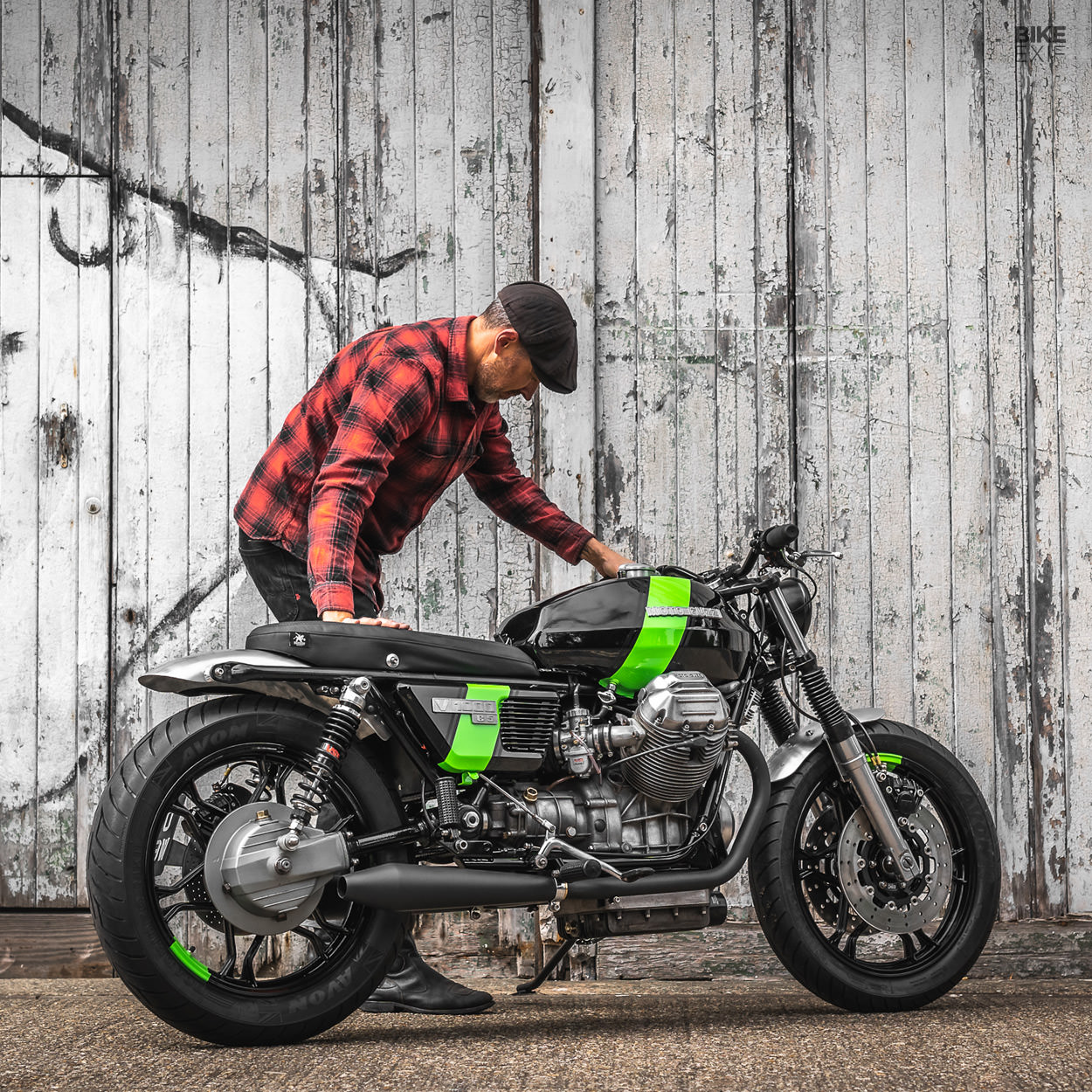