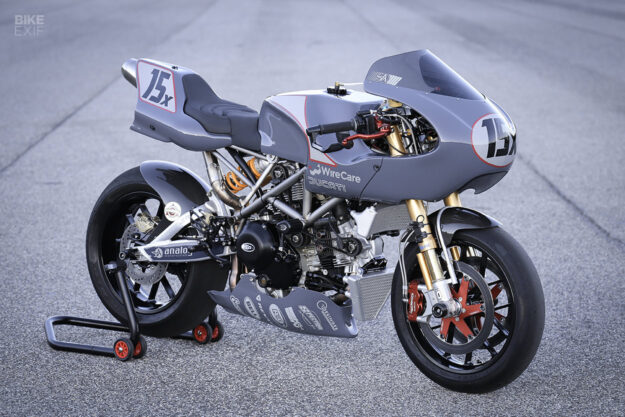 The online classifieds of the world are littered with basket cases that may or may not make good donors for custom motorcycle projects. But how often do you stumble upon a rolling chassis sporting a bespoke titanium frame, a Ducati 1000 DS motor and a smattering of track-spec goodies? And how often is it a bike that was previously featured on Bike EXIF?

The first time we laid eyes on this Ducati, Icon Motosports had turned it into a wild track beater for their design director, Kurt Walters. Now, over a decade since its first rebuild, Tony Prust at Analog Motorcycles has given it a second lease on life. 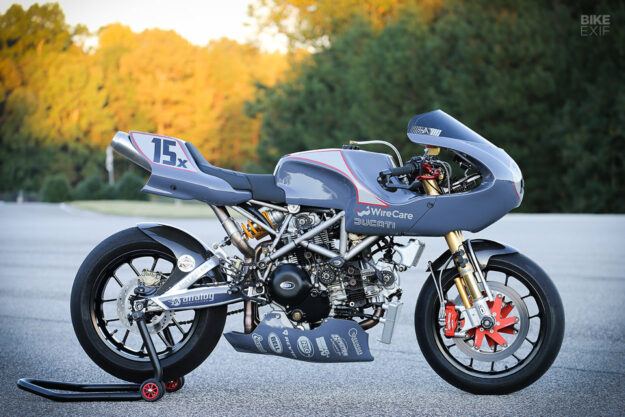 Rumor has it that the bike spent time on the track, before eventually going under the knife again. That project was abandoned, the bones of it were put on Craigslist, and long time Analog customer, Del Thomas, snapped it up.

“He bought with the intention of doing an Analog Motorcycles custom build at some point,” Tony tells us. “After all, the components alone on it were well worth the price he scooped it up for. Several ideas were thrown around about what to do with it, but we never settled on anything.” 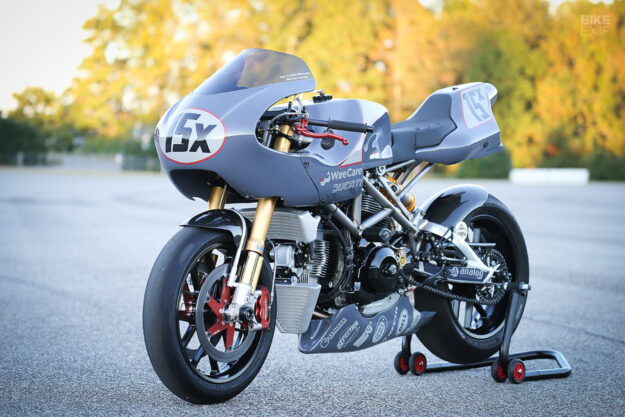 Del is not only Tony’s customer, but his friend and racing teammate too. The two had been piloting Analog’s ‘Hyper8’ Ducati Hypermotard in the AHRMA Battle of the Twins racing series, in the sub-900 cc ‘2’ class. Since this donor bike came with a lot of race-ready components, they decided to turn it into another race bike—but first, they had to figure out what it would look like.

“Earlier in the discussions, I tried talking him into a Mike Hailwood replica with all-aluminum bodywork,” says Tony. “Del has a number of Ducatis and knows the pros and cons of owning and riding them, and knew the lack of comfort of a MH replica would deter him from riding it. So it was decided: make a Hailwood replica race machine, to compete in the bigger Battle of the Twins class.” 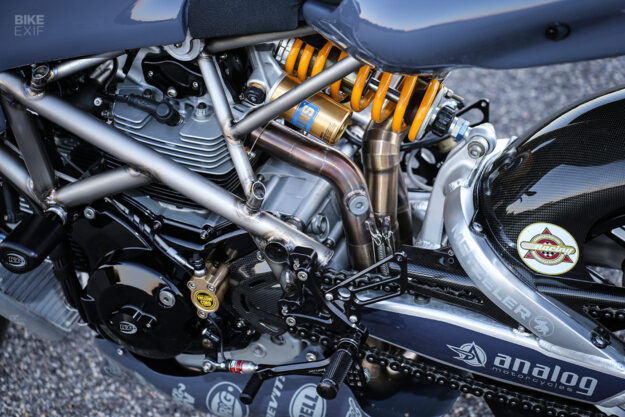 Tony started by stripping the Ducati down to its rolling chassis. The titanium frame was originally built by Arc Fabrication, and was matched up to a Ducati Supersport 1000 DS swingarm, Öhlins suspension and adjustable yokes from Attack Performance. Those were all worth keeping—but the Kawasaki wheels that came with the bike had to go.

Analog sourced a set of SuperSport 1000 DS hoops to use as backups and rain wheels, with aftermarket forged aluminum items for the primary setup. The rear was a straight swap, but the front needed a set of custom spacers to fit. 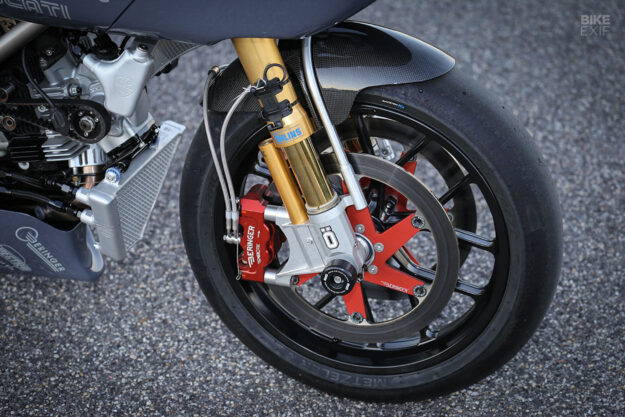 A full Beringer brake setup was part of the deal too, but the rotors didn’t match the new wheels. Beringer sent over a new set of rotors, Free Form Design supplied custom-made spacers, and Analog put it all together with Beringer master cylinders and Spiegler hoses. Up in the cockpit, the Beringer brake and clutch controls were mated to Vortex clip-ons and grips.

Analog also specced a full set of protective bits from R&G Protection, because, as he says, “it’s not if, but when, you crash.” The kit includes crash bobbins, engine covers and lever guards. 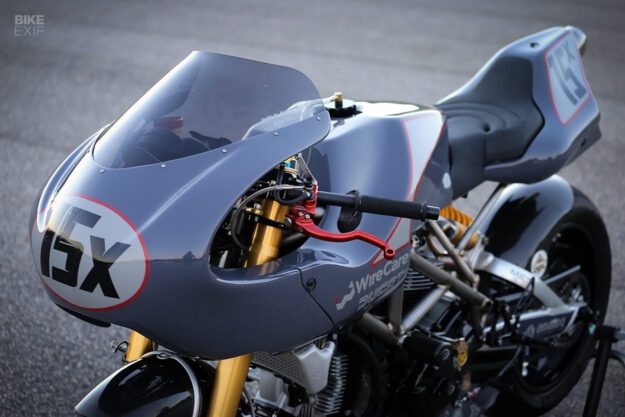 This philosophy extended to the bodywork too. If Tony had forged ahead with his idea of hand-formed aluminum parts, a crash would mean hours of repair work. What the guys needed, was a bolt-on solution that could easily be replaced.

“I called up Fred from iOne Moto,” Tony tells us, “and they made up a set of MH replica bodywork in lightweight race trim for us. Now I just needed to make a tank that tightly fit under the cover. That had to be the most difficult tank I have made to date.” 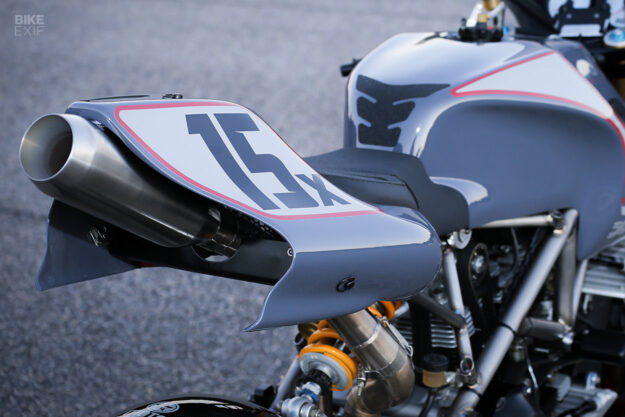 “It needed to fit the bodywork as tight as possible, since you dig your knees into the tank a lot while racing, and don’t want the ‘loose’ feel of bodywork with nothing behind it. The tank itself is a work of art that no-one will ever really see.”

The bodywork attaches to custom-made mounts via a set of quarter-turn fasteners. Tony also fabricated a seat pan and a structure to hold it, the tail section and the batteries. Final touches include a carbon fiber front fender and rear hugger, and swish upholstery by Dane Utech at Plzbeseated in Chicago. 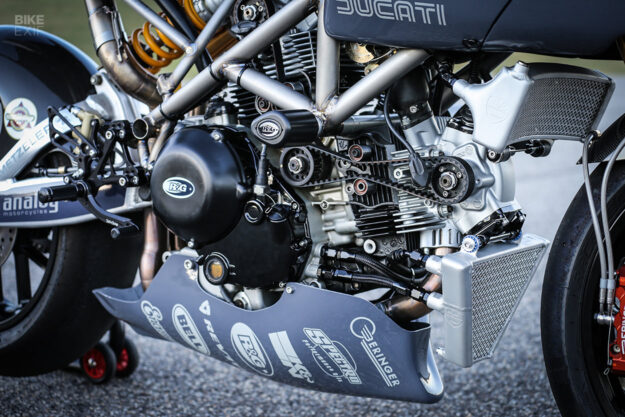 The Ducati’s two-valve 1000 DS engine went off to Moto Corse Performance in Florida for a fresh rebuild and a bump to 1,123 cc. It now runs with a Corse Dynamics intake kit and K&N filters, a Microtec ECU and two H20 Performance oil coolers, plumbed with Wirecare cooler lines. The bike also sports a STM slipper clutch and a quick-shifter.

The exhaust is a custom piece, with a Cone Engineering muffler poking out below the tail. It’s a classy homage to the original Ducati MH900e. The bike was rewired too, with Wirecare sleeves keeping things tidy. 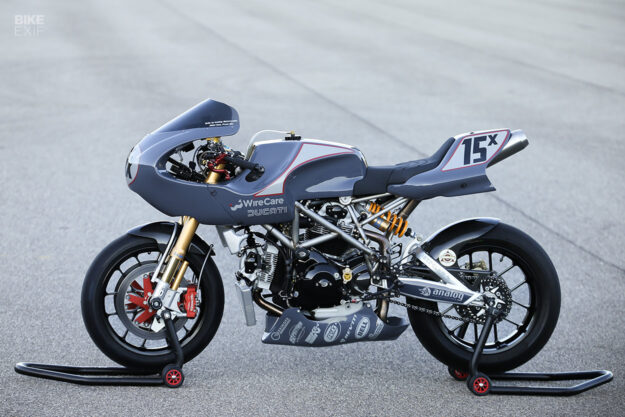 Wrapped in a grey livery by Krossover Customs, with graphics by Enamel Brand, Analog’s ‘Ducati MH11’ looks extraordinarily handsome for a race bike. But does it have the go to match the show?

“We didn’t go crazy on the engine first time around,” says Tony, “since we weren’t sure how well the bike would perform on track, or how comfortable I would feel on it. We can always upgrade the engine down the road. With a mild tune on it, we are at just under 100 hp at the wheel, and weighing in at 340 lbs wet.” 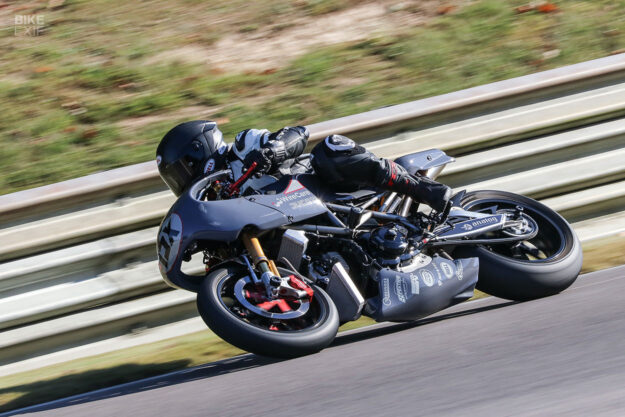 “We’ve taken it to a couple of tracks, and although it is a bit different to the Hyper8, it’s a pretty amazing machine and I’m looking forward to racing it more. And with a successful finish to the 2022 season as the Battle of the Twins 2 National Champion, the future looks bright for Analog Motorcycles racing.” 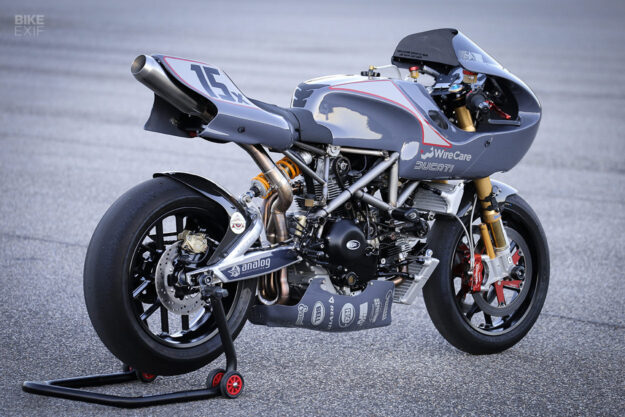