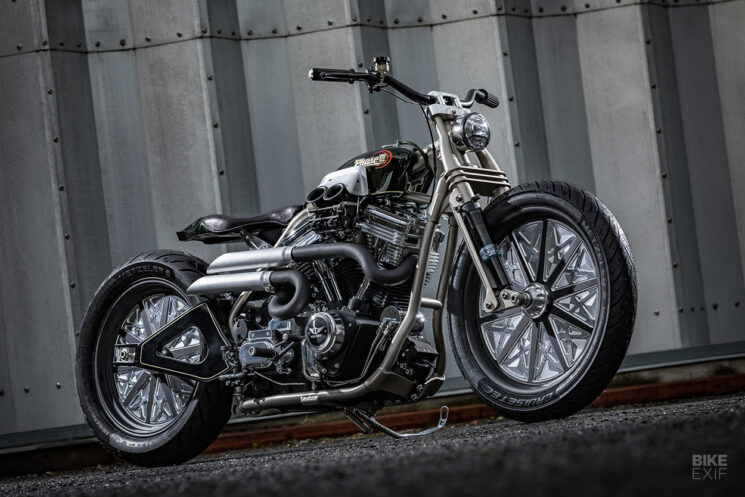 What does it take to win the ‘Best Detail Work’ award at the illustrious Yokohama Hot Rod Custom Show? You’ll need oodles of imagination, ingenuity and skill—and Takuya Aikawa isn’t short on any of those.

Aikawa-san runs the Japanese custom shop Sureshot in Chiba, just east of Tokyo. With two HRCS ‘Best in Show’ awards already under his belt, he entered this custom Harley-Davidson Dyna in last month’s running of the event. He might not have bagged the overall this time, but an award for the best details at Mooneyes (as the show is commonly known) is nothing to sneeze at. 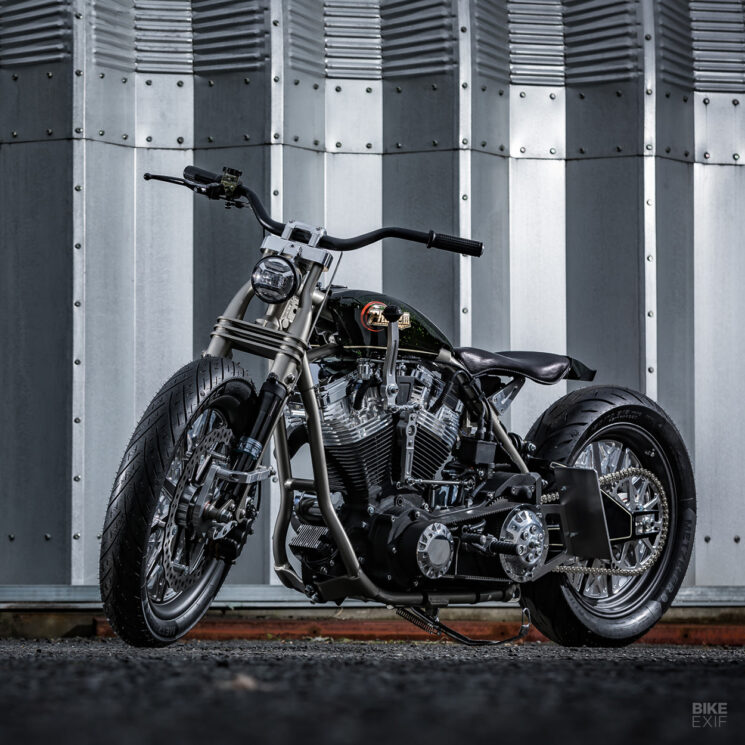 Dubbed ‘Phase III,’ this 1998-model Harley-Davidson FXD Dyna Super Glide follows Sureshot’s mission to build custom bikes that are “fast, lightweight, and skinny.” But that’s not all it has going for it. The closer you examine it, the more you find the plethora of neat details that earned it its award.

The mono-shock swingarm and twin downdraft intakes are obvious changes, and it doesn’t take a rocket scientist to notice that the frame’s been tweaked. But you’ll need a sharp eye to spot the non-standard front suspension, or the radical custom hand-shifter design. 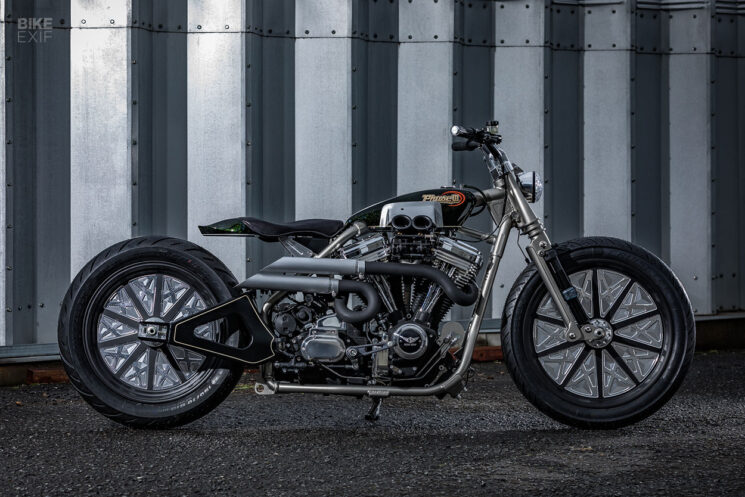 At the heart of the machine, Takuya rebuilt the motor with a pair of burly billet aluminum cylinder heads from Speed and Science. Next, he fabricated a custom manifold to fit a Keihin FCR41 downdraft twin carburetor with velocity stacks, and a handmade cover to keep things tidy up top. The twin slash-cut exhausts are custom too.

The bike runs with a standard five-speed Dyna transmission, while the clutch has been upgraded to a hydraulic system. The left side sports a menacing 2” open belt primary from Ultima—but it’s the mechanism mounted above it that’s really interesting. 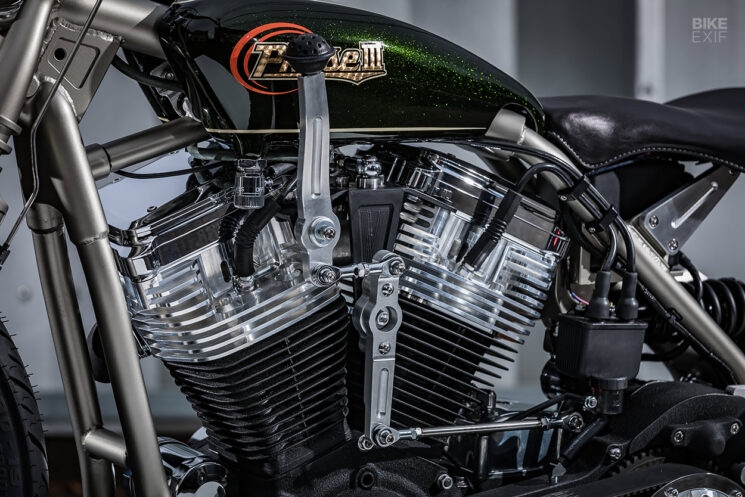 Attached to the left side of the engine is a hand shifter setup of Takuya’s own design. Using a series of connecting rods and CNC-machined linkages, it puts the shifter right next to the gas tank for quick access. A dimpled, leather-covered shifter knob rounds it off.

There’s more machine work up front, where Takuya fabricated his own front suspension system. It’s a leading link design of sorts, with a pair of air shocks from RacingBros adding dampening. It also reportedly took a lot of fine-tuning to make sure it wouldn’t nosedive under braking. 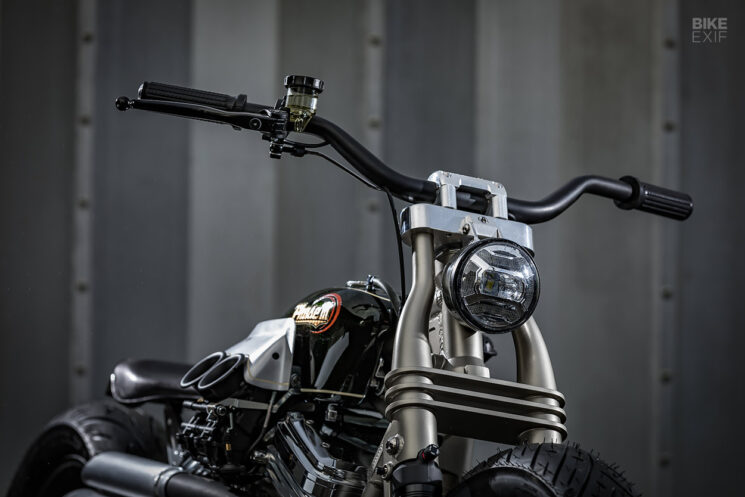 The bottom yoke is integrated with the fork legs, which are held in place by a custom top yoke. The cockpit is super sano, with custom bars wearing little more than an internal throttle and the front brake lever. Everything has a made-to-fit vibe—like the machined attachment point that holds the bike’s LED headlight.

Even the solid machined wheels are one-offs. Measuring 19” in the front and 18” at the back, they’ve been designed to carry all their accoutrements on the left side only, leaving the right side open. The front wheel’s brake disc mounts directly to tabs on the wheel itself, without the need for a rotor, while the back brake hides behind the sprocket. 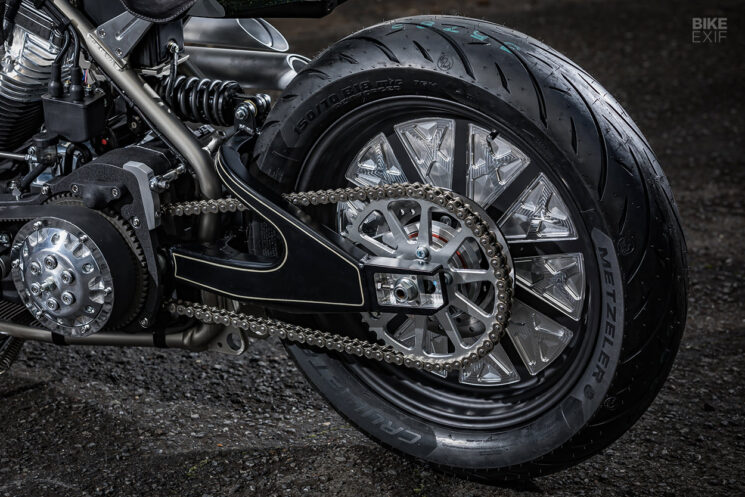 Not much of the original frame remains either. Takuya fabricated a new backbone from oval tubing, and redesigned the subframe to taper down to a custom aluminum swingarm. The OEM twin shock arrangement is gone, replaced by a single RacingBros shock with a custom tune.

A slim tail unit sits up top, with an equally slim fuel tank positioned in front of it. Both are custom pieces, hand-formed from aluminum. The seat wears horsehide leather, while the tank’s adorned with a custom gas cap. 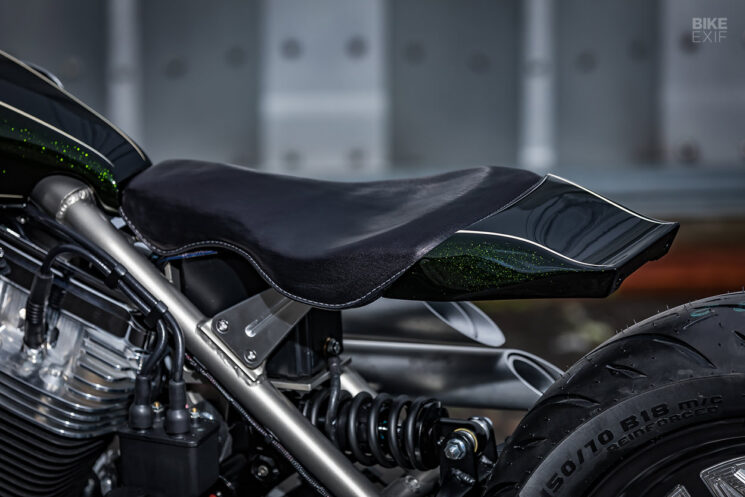 The Harley’s also kitted with smattering of less noticeable machined parts, like the side-mounted plate holder and the custom foot pegs. You’ll find the SureShot logo on the points cover—and a couple of other sneaky locations.

All of those parts come together harmoniously to create a fresh spin on the cruiser genre. Takuya’s Dyna cuts a lithe figure, with a flawless stance and just the right amount of flat track influence. There’s a hint of hot rod styling in the mix too, via the deep metal flake green paint on the bodywork.

But it’s the auxiliary finishes that really testify to Takuya’s attention to detail. Take note of how the fuel tank’s pin stripe also runs over the aluminum cover adjacent to the intakes, and how all the pin striping matches the color of the powder coated frame. Even the wheels are clever; they look like regular nine-spoke alloy hoops from a distance, revealing a secondary snowflake pattern as you get closer. 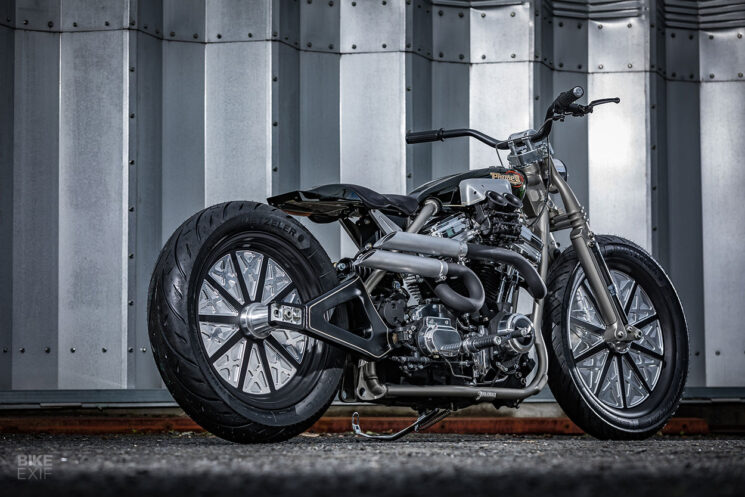 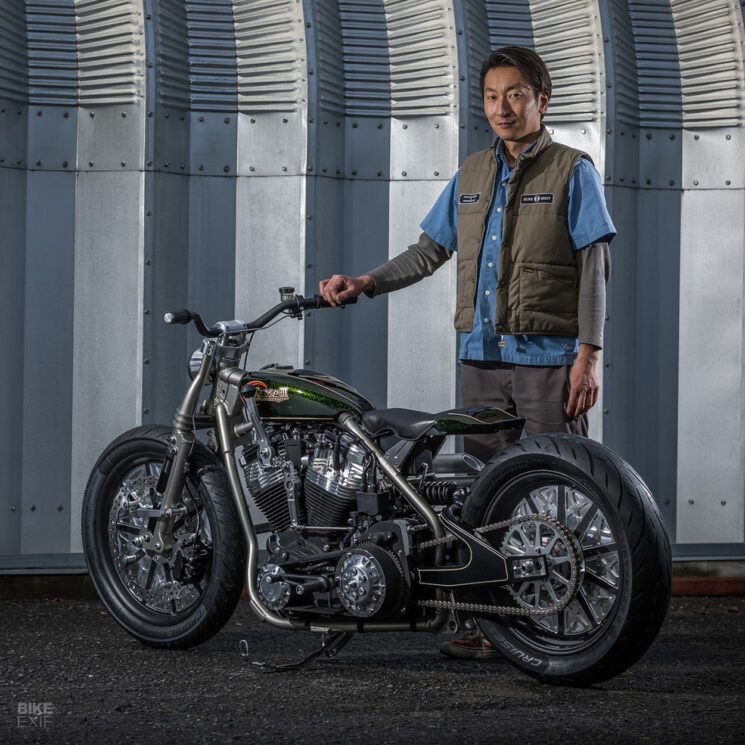