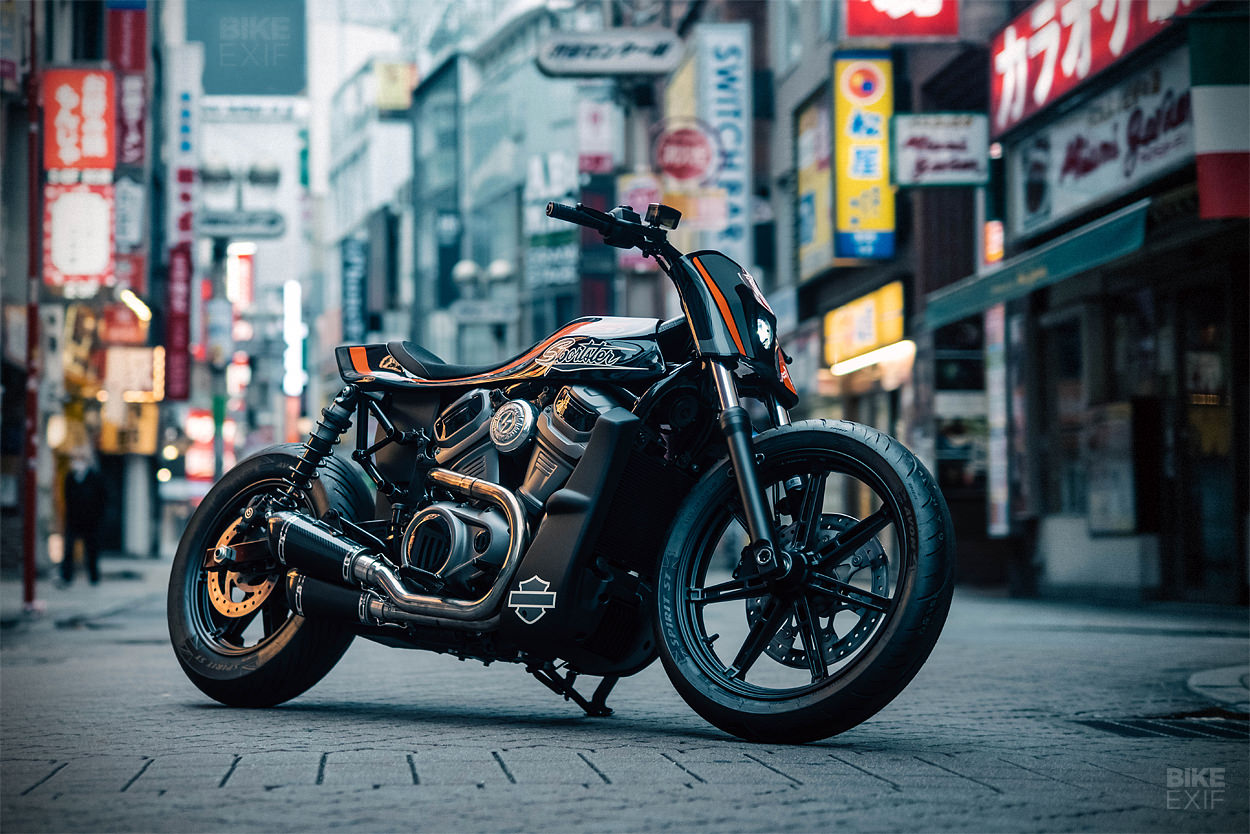 It’s only three weeks since Harley-Davidson pulled the sheets off the 2022 Nightster, giving us a look at the spiritual successor to the original Sportster. But six months ago, pre-production versions of the new bikes were discreetly delivered to a select group of six customizers in the US, England, Germany, China and Japan.

Hideya Togashi was one of the first people outside Milwaukee to see the new machine. He needs no introduction here; he’s been running the Hide Motorcycle workshop for twenty years, and has won the supreme award at the Yokohama Hot Rod Custom Show not once, but twice. He’s also famous as a Sportster specialist. 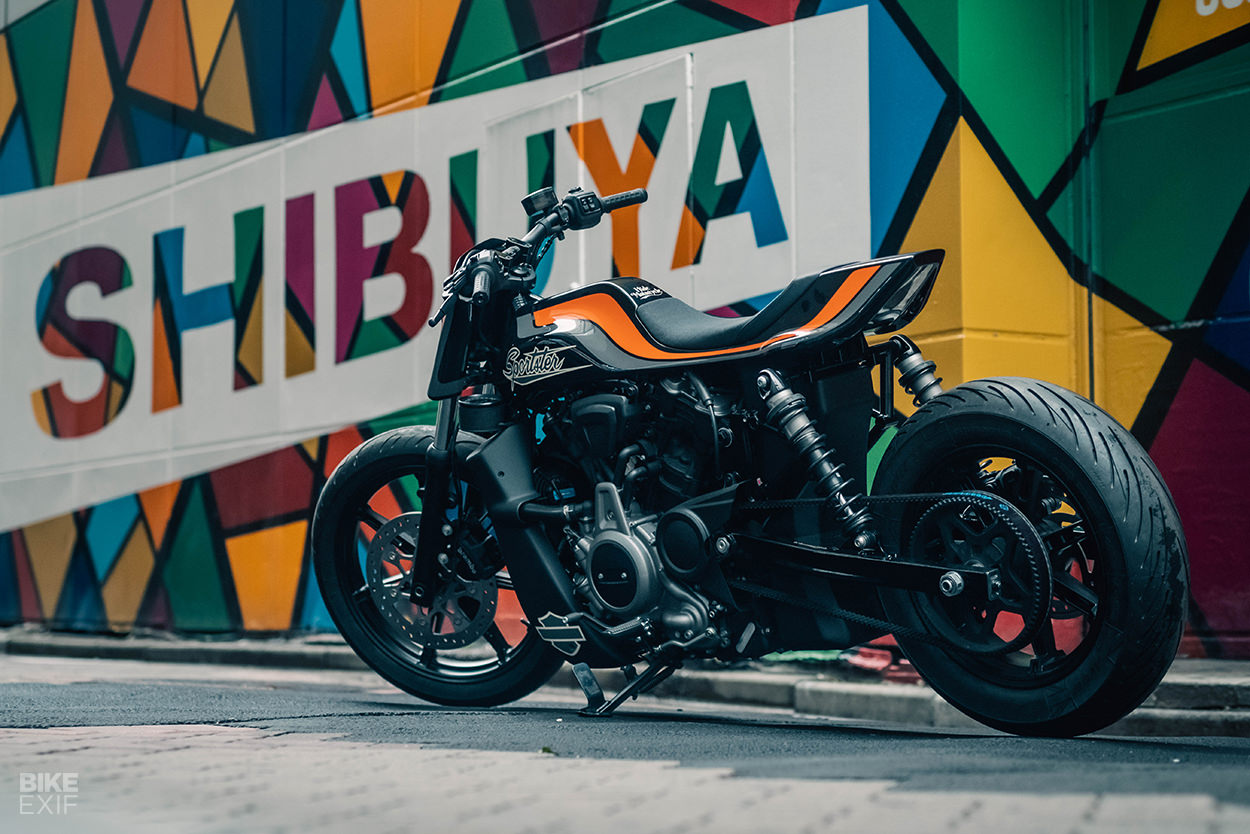 The story started in December last year, when Harley-Davidson HQ contacted Togashi-san. Would he like to take part in a custom project for an upcoming new model?

“The Nightster name was not mentioned, because it hadn’t been launched yet,” says Togashi. “It was a great honor to receive the request. I was nervous, not knowing details of the bike, but I didn’t need long to accept!” 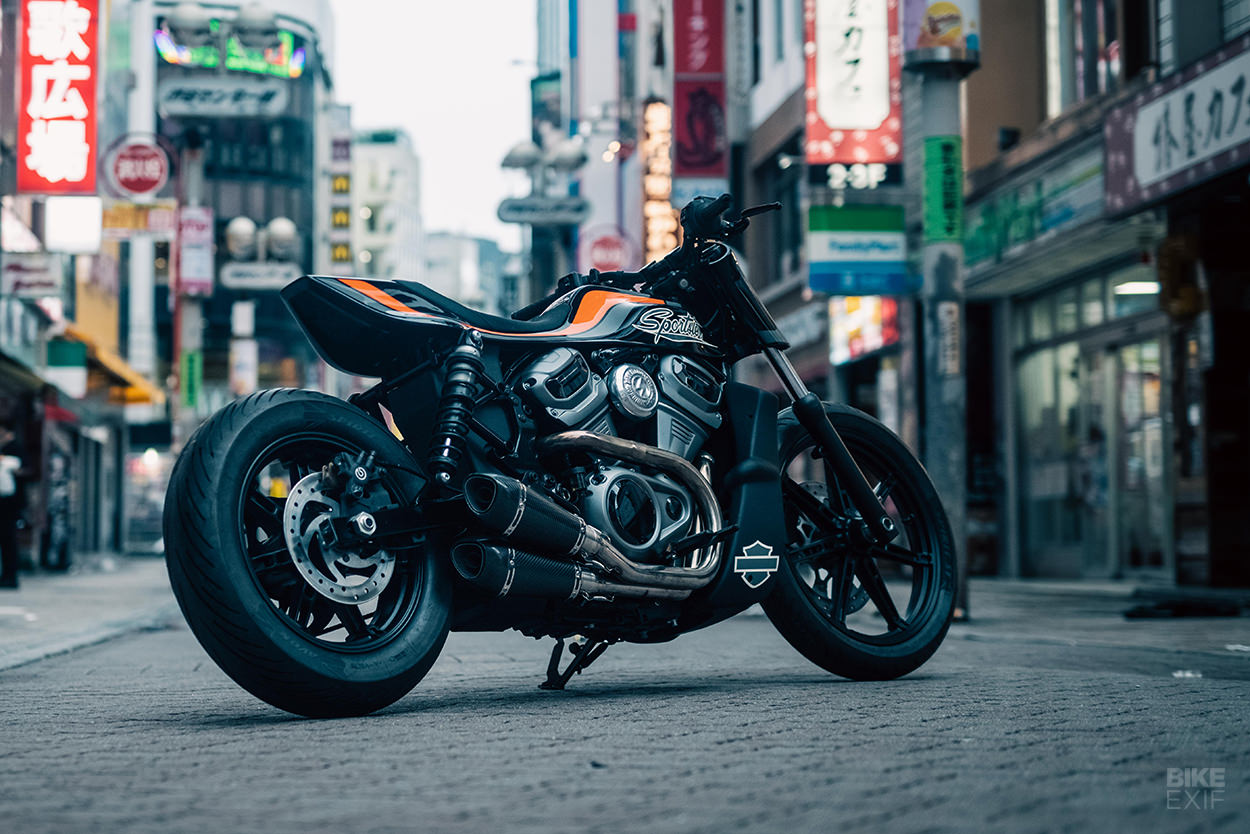 After signing a contract, Harley told Togashi that the donor bike would be the 2022 Nightster. He would get just 60 days to build his custom, and the Revolution Max 975T engine must remain untouched.

As soon as Togashi was on board, he saw images of the Nightster. “My first impression was that they had recreated the style of the ‘old’ Sportster,” he says. 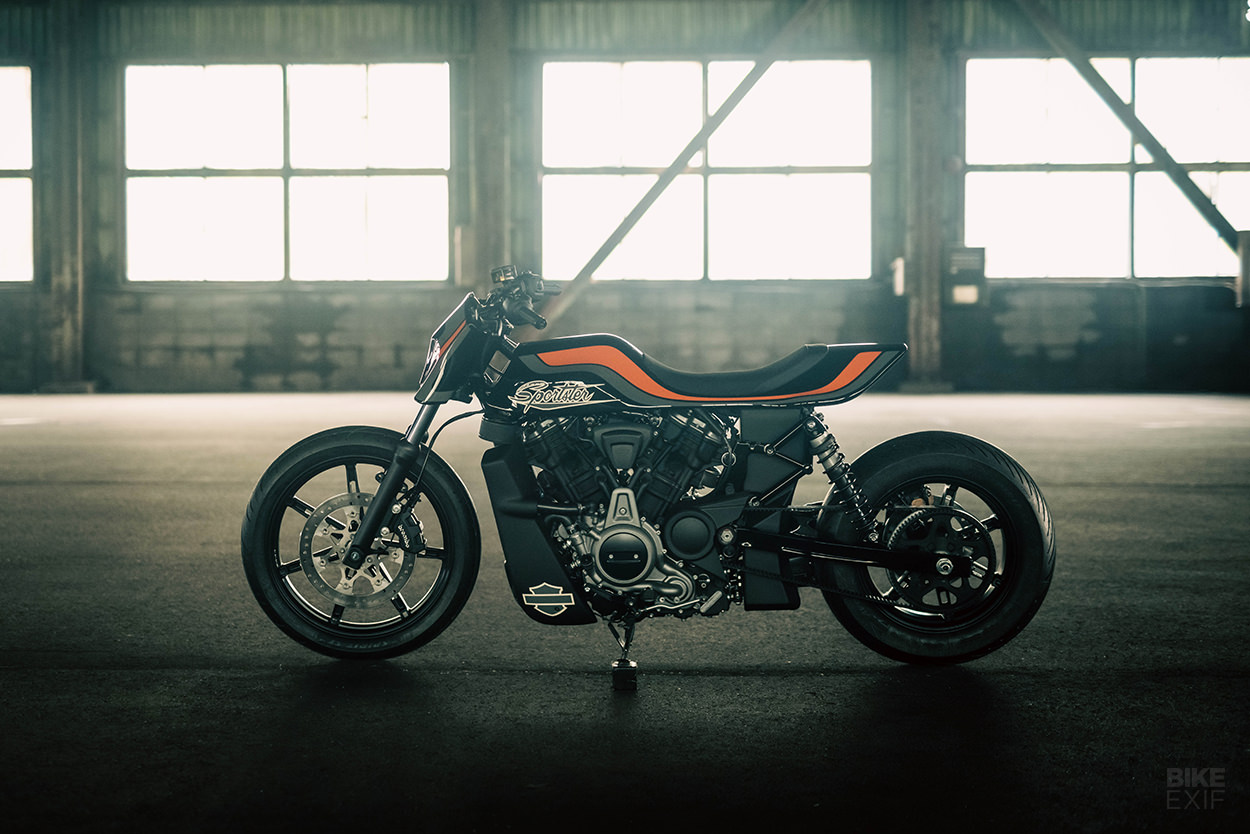 As he waited for the Nightster to arrive at his Kawasaki City workshop, Togashi started planning the build. Given the tight deadline, his first thought was to use a few commercially available aftermarket parts to achieve the Hidemo style.

The day before Christmas Eve, the Nightster turned up. “I took it apart and looked at its skeleton, and realized that the plan I had initially envisioned would not work,” he says. “I have built over 100 customs based on the Sportster so far, but I could not use that experience. The Nightster was a completely new Harley.” 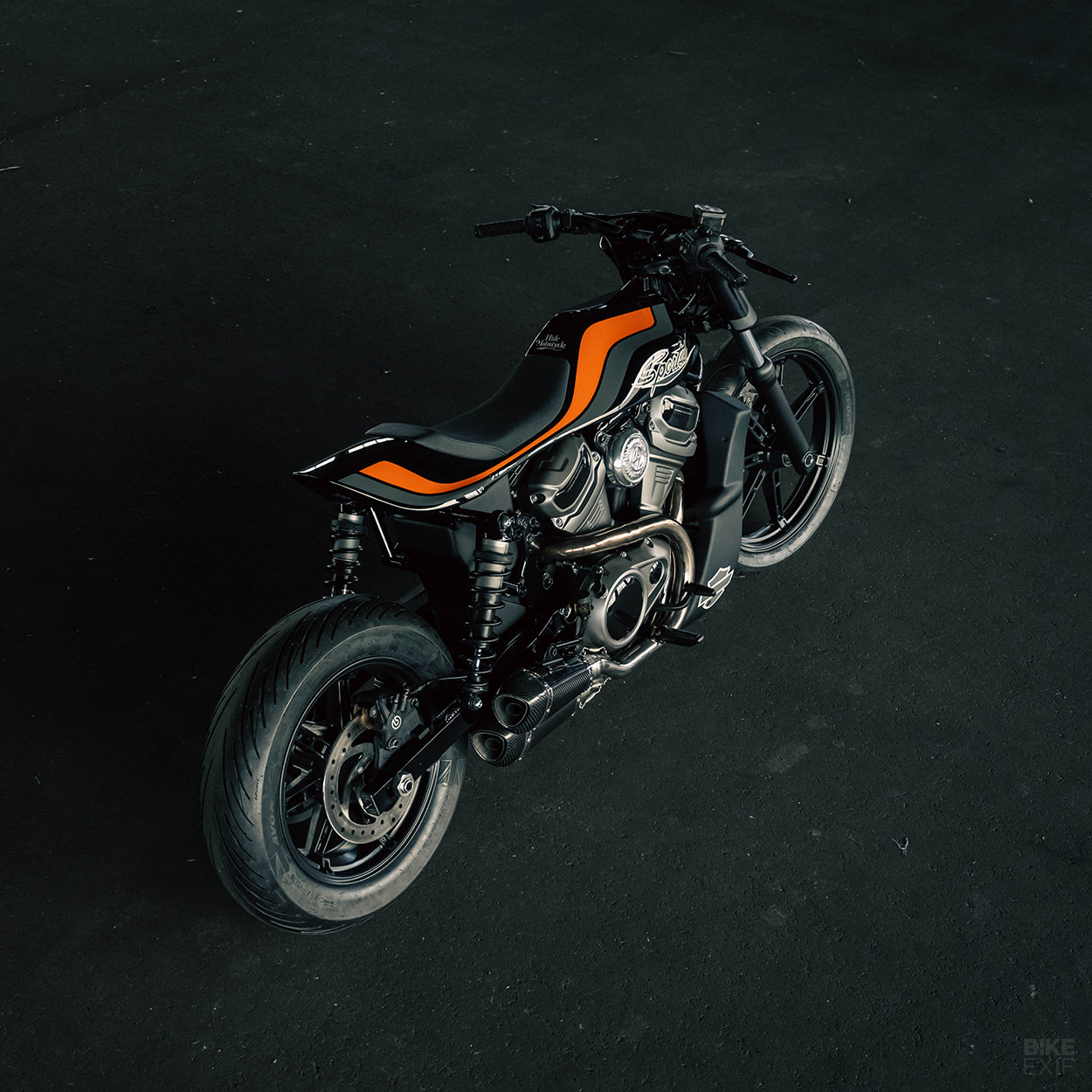 Togashi sat down with Naoya Watari, who has helped him at Hidemo for many years. “The time we spent working on the concept was unthinkably long.”

“When I saw the new front frame and electrical wiring details, I realized that everything about the Nightster was different from the previous Sportster. The ‘old’ Sportster has a wide range of customization possibilities because of its transmission-integrated OHV engine, and the simplicity of the frame structure that holds it.” 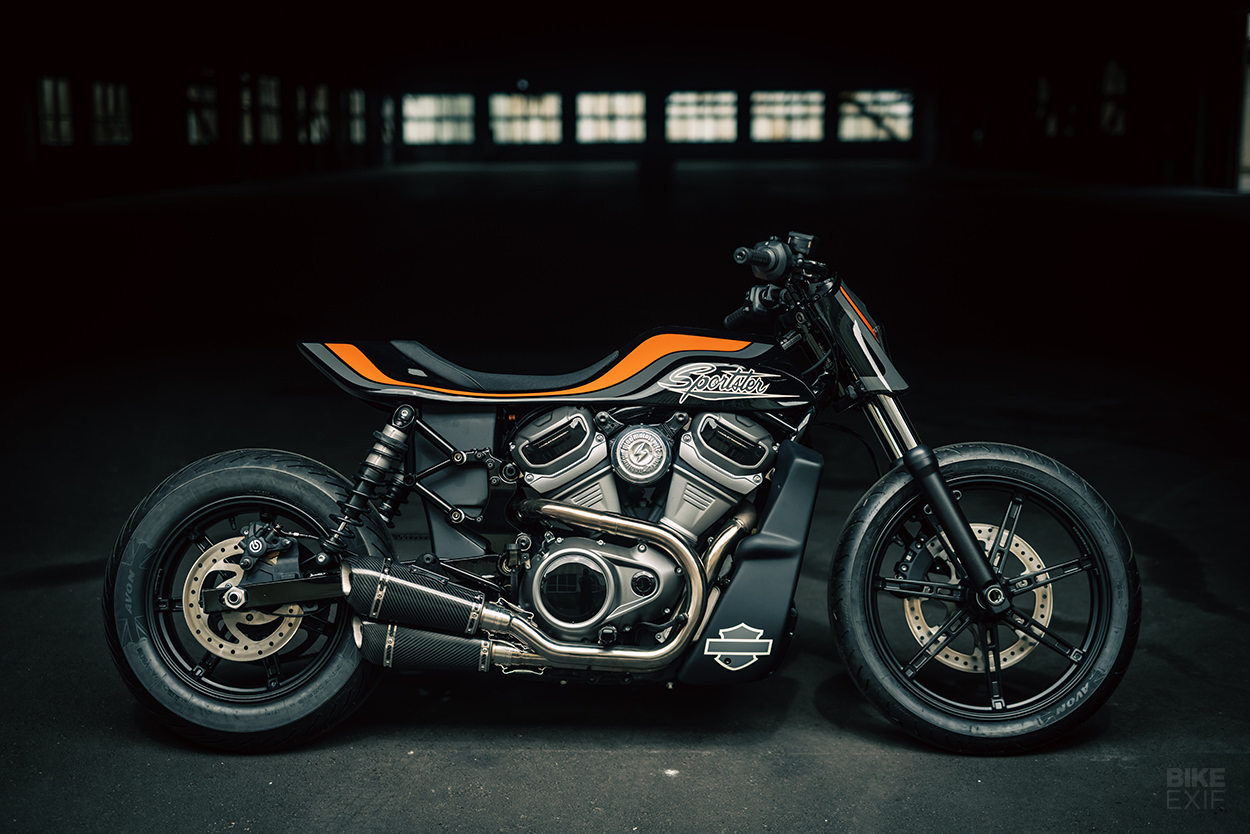 After many sketches, Togashi and Watari decided on the street tracker style. “It’s a style and term that emerged from the Japanese custom scene in the late 1990s and early 2000s,” says Togashi. “This style has had a strong influence on custom bike culture, and it’s the cornerstone of Harley custom culture in Japan.”

The Hidemo crew took the Nightster apart and measured everything up. They noticed that front of the frame has a V-shape approaching the steering head, with the ‘tank’ cover in the center. (It’s actually hiding the airbox, with the real fuel tank and its filler cap under the seat.) 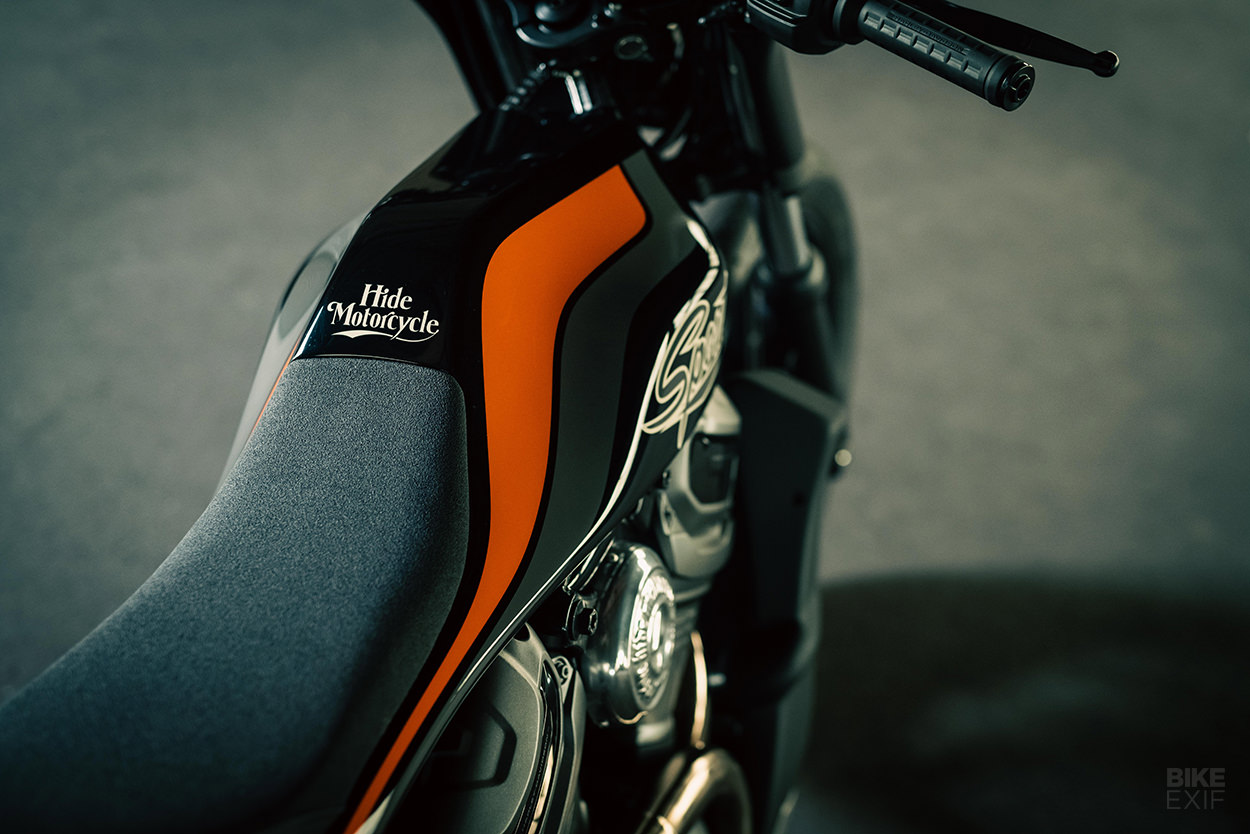 It meant they couldn’t change the width of the ‘tank’ to make it look slimmer—or move it back and forth to make the body more compact. “It is also difficult to change the shape of the cover, because it is packed with wiring and electrical parts,” says Togashi.

Hidemo have not modified the main part of the frame, because it’s critical to the identity of the 2022 Nightster. And they decided to make their changes mostly bolt-on, so they could be replicated by future Nightster owners—right down to the custom header pipes and carbon mufflers. 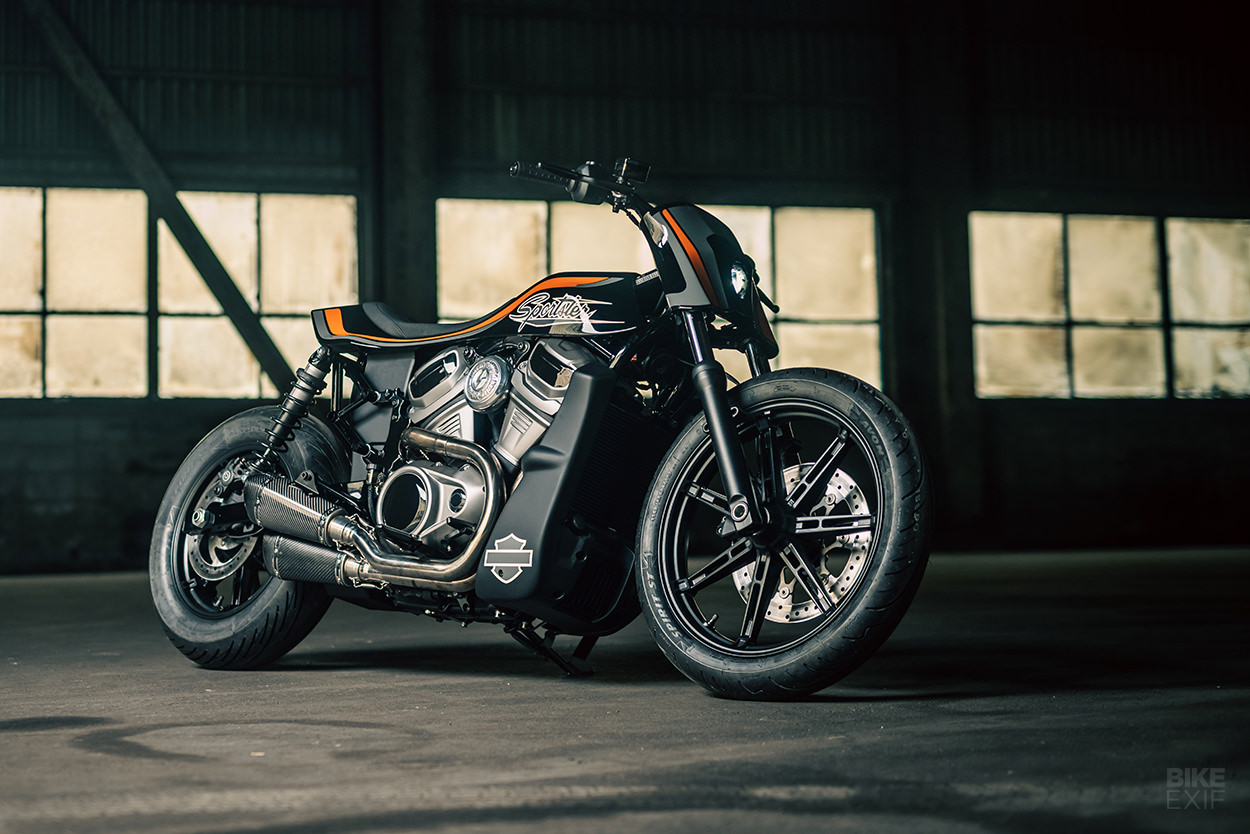 The new bodywork was shaped up using Styrofoam, and then clay to create more detailed lines. Then it was time to hand-hammer aluminum sheets.

The back end of the frame, which is a rear suspension mounting point, is new and wider than stock. The traditional ‘fender strut’ is gone and the upper shock mounts have been moved about 15 cm forward, to create an illusion of a longer tracker-style swingarm. 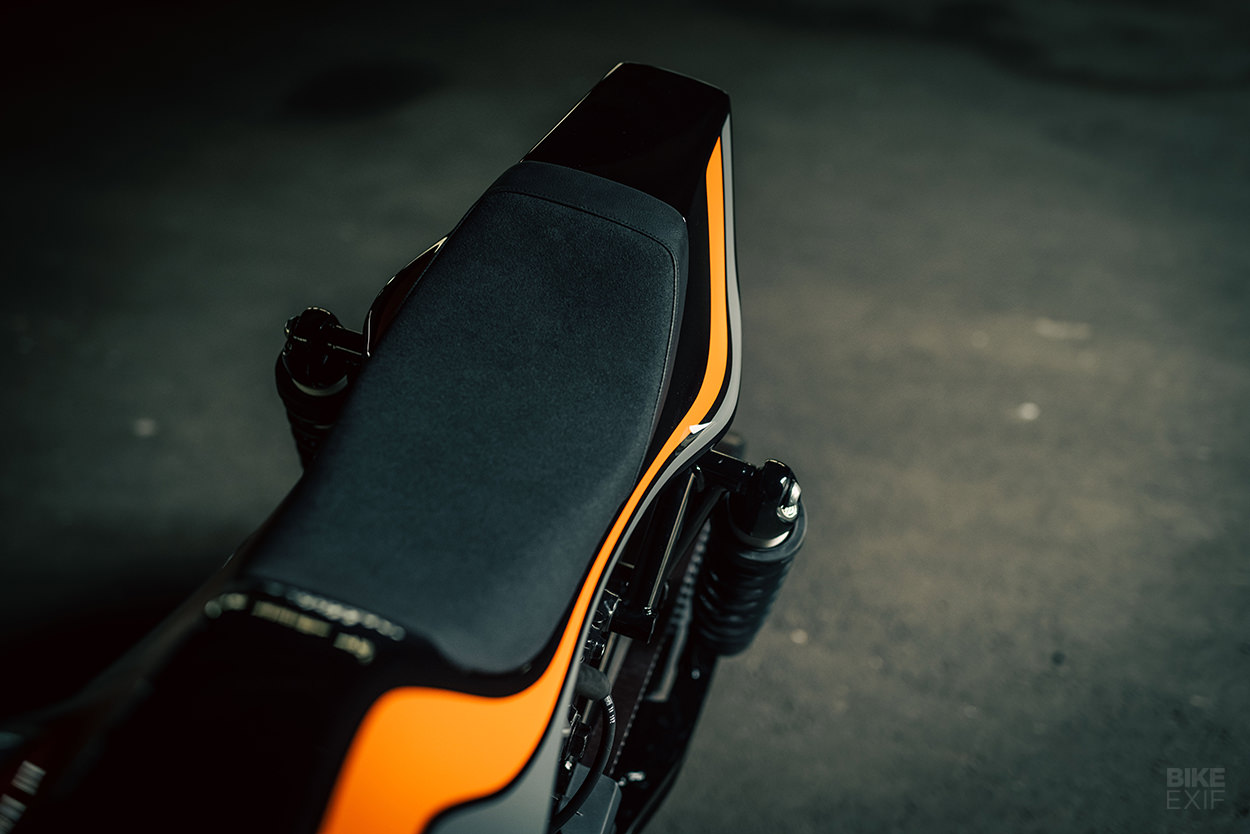 The tail unit, which is part of the one-piece body, makes the frame appear to taper at the back—because the front part of the bodywork and ‘number board’ are intentionally broad.

“The front cowl plays a very important role in this bike,” Togashi notes. “Given the width of the radiator on the 2022 Nightster, it must have a certain amount of volume to balance the entire body.” 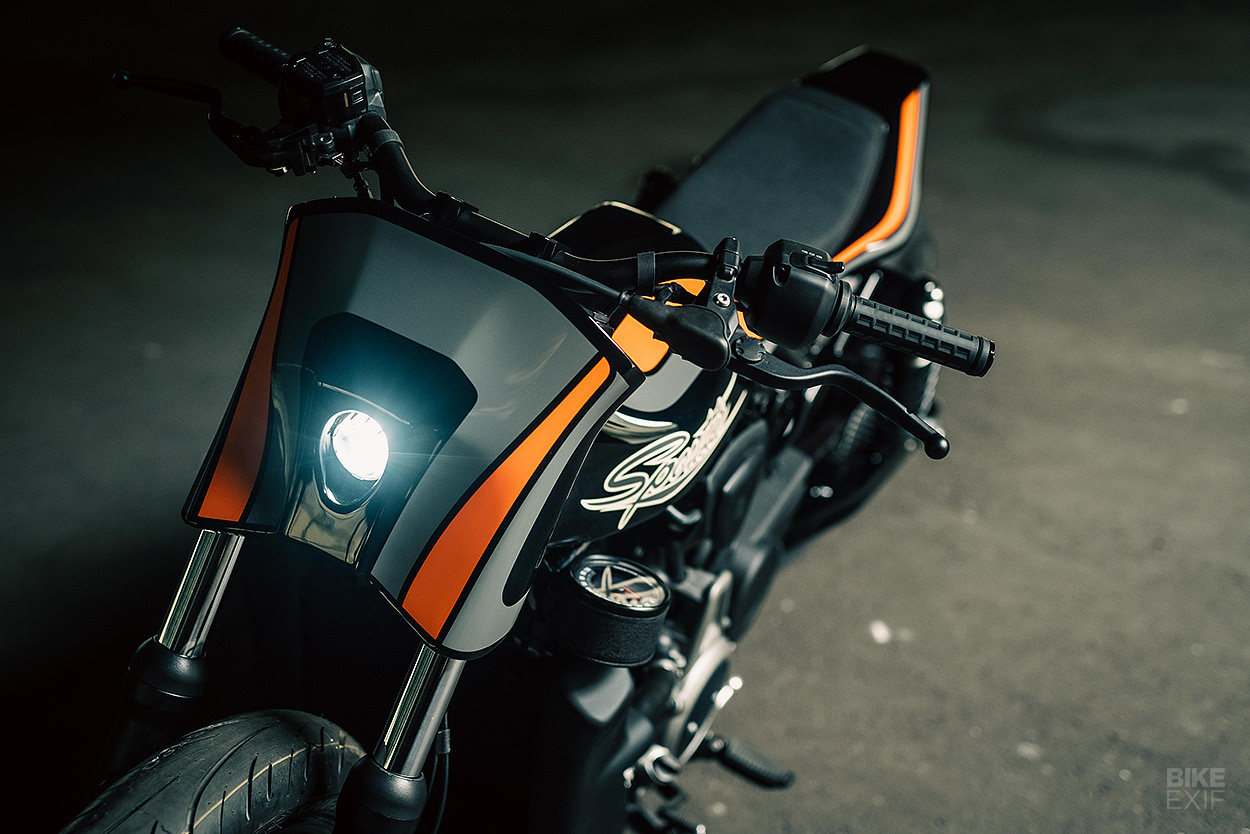 It’s the size of a typical flat tracker number plate, but reinterpreted with sharp edges and complex curved surfaces, wrapping around the fork tubes and hiding the triple trees. German-made ABM handlebars sit right behind, with a compact speedo repositioned to below the tank on the left side.

Inspiration for the sleek monocoque came from the other side of the Pacific Ocean. “I have adopted the style and techniques of Tracy’s Fiberglas Works,” Togashi reveals. 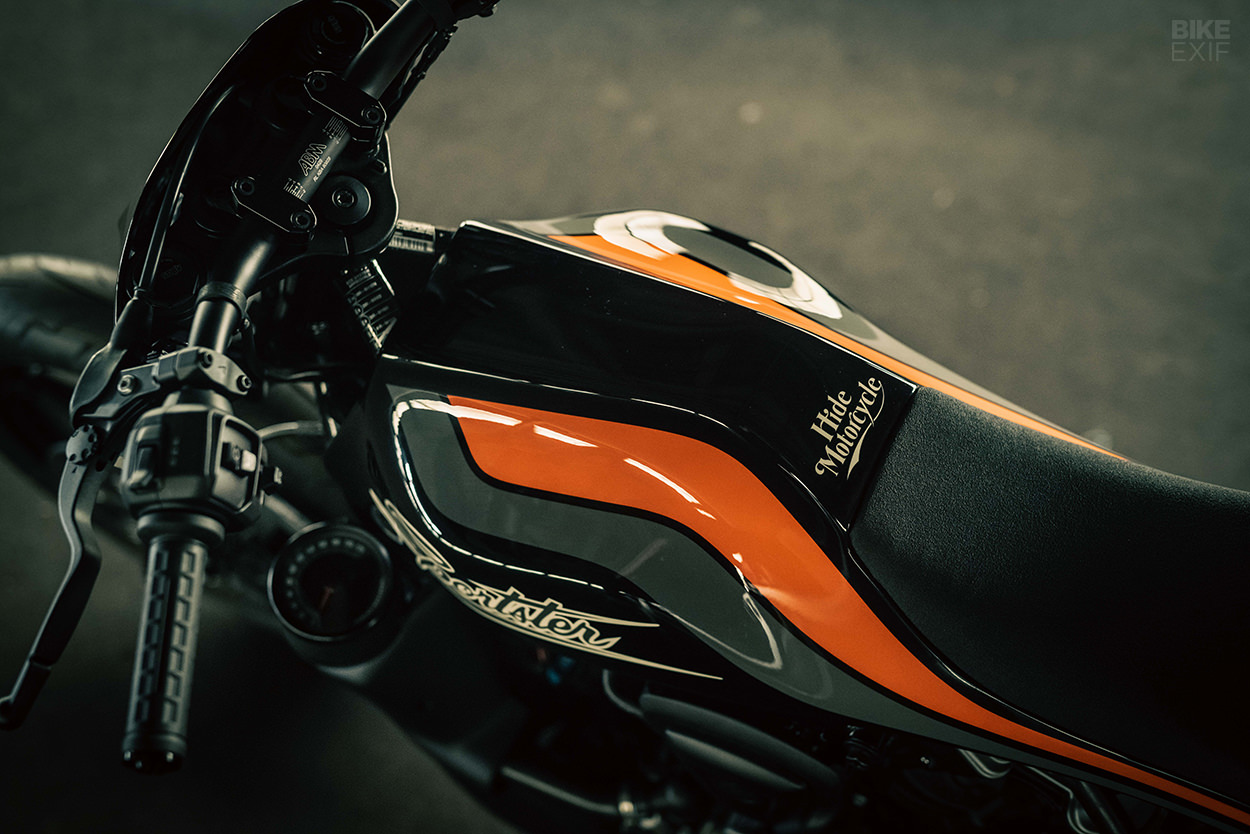 “The one-piece bodies designed by Tracy Nelson became popular in the 1960s and 1970s. They’re symbolic of the custom scene at the time. Watari has a wealth of knowledge, and he and I spent a lot of time exploring the possibilities for the paint scheme.”

The paint was shot by Keen Edge and the orange, of course, is a traditional Harley color. The Sportster graphic on the ‘tank’ is another, slightly cheeky, nod to the past. 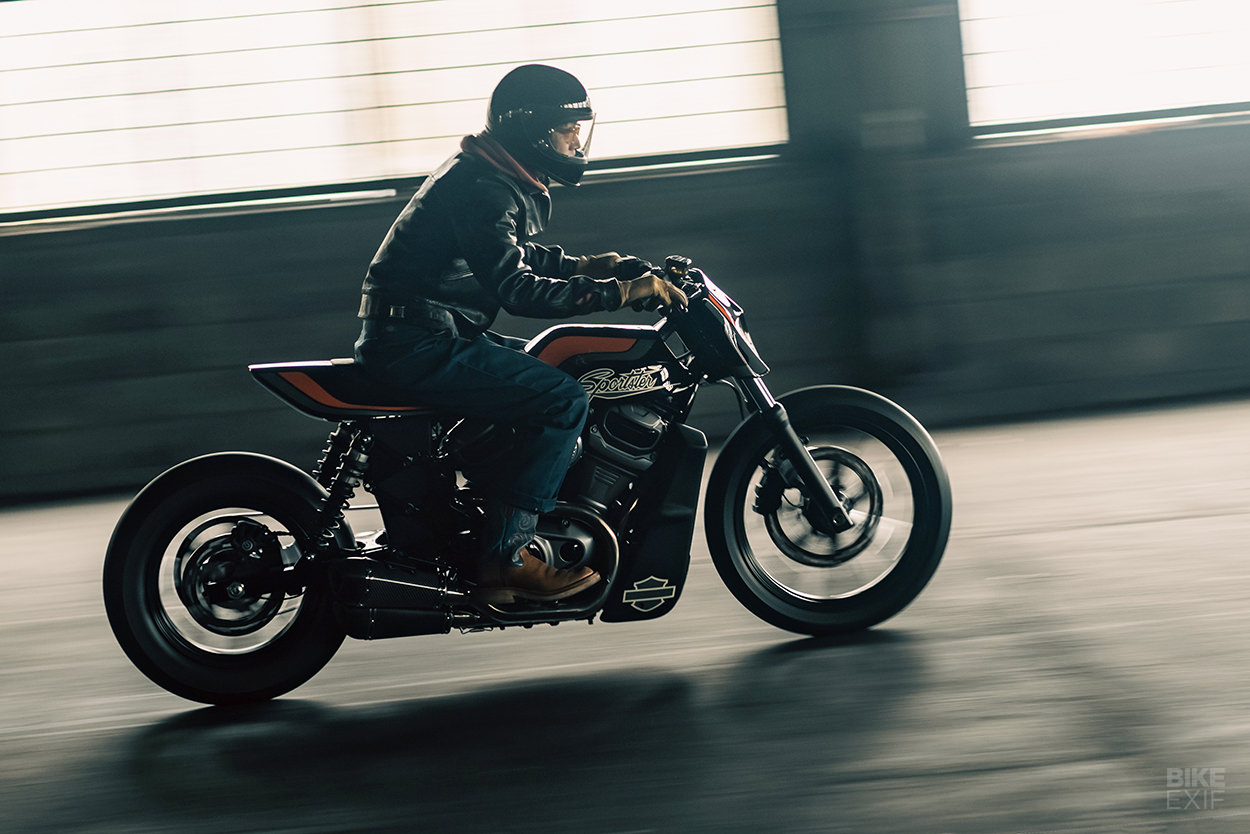 Hidemo’s tracker is very easy on the eye, and a brilliant opening salvo for the flood of Nightster customs we’re likely to see in coming years. But the build itself was far from easy for Togashi and Watari, despite their skills and experience.

“It was a new challenge for Hidemo,” Togashi admits. “It was a difficult project, but we are happy with the result.” We bet Milwaukee are, too. 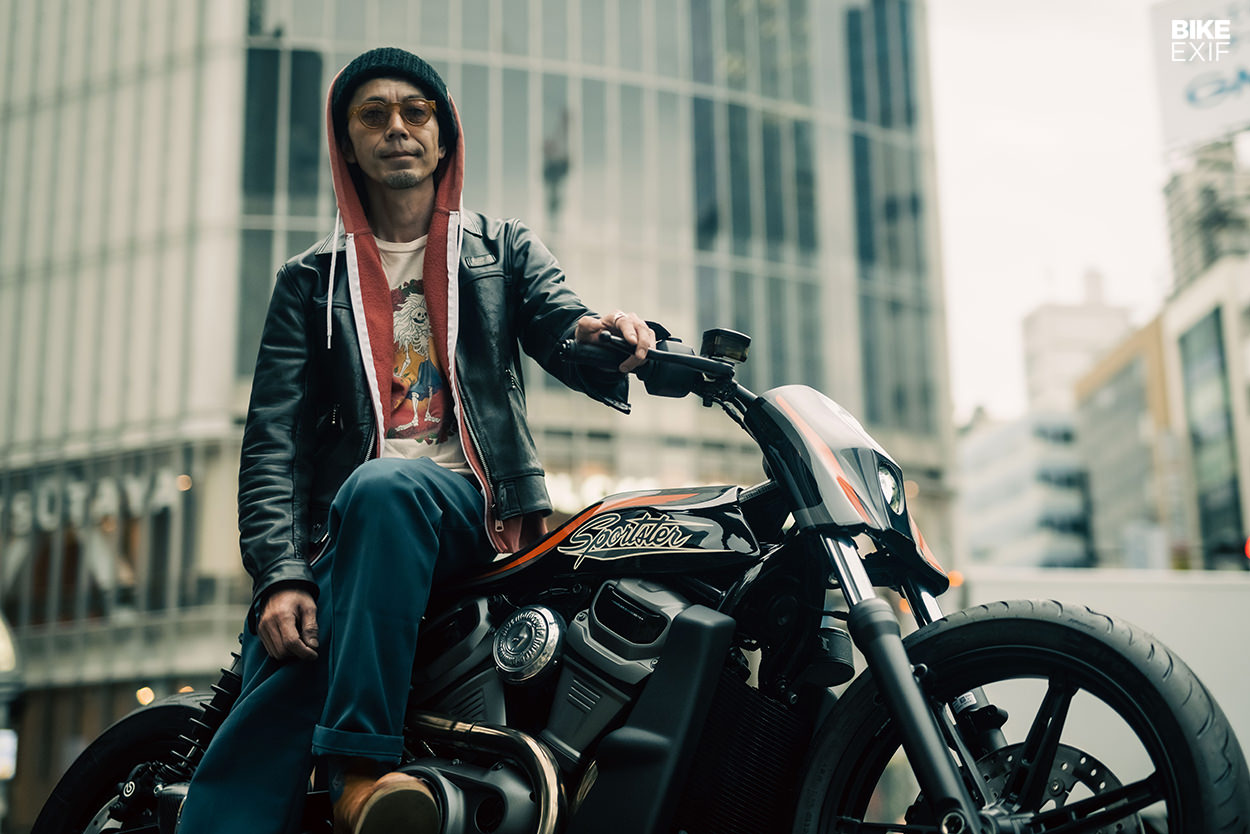