Hidemo Style: A 1970s Shovelhead from one of Japan’s best 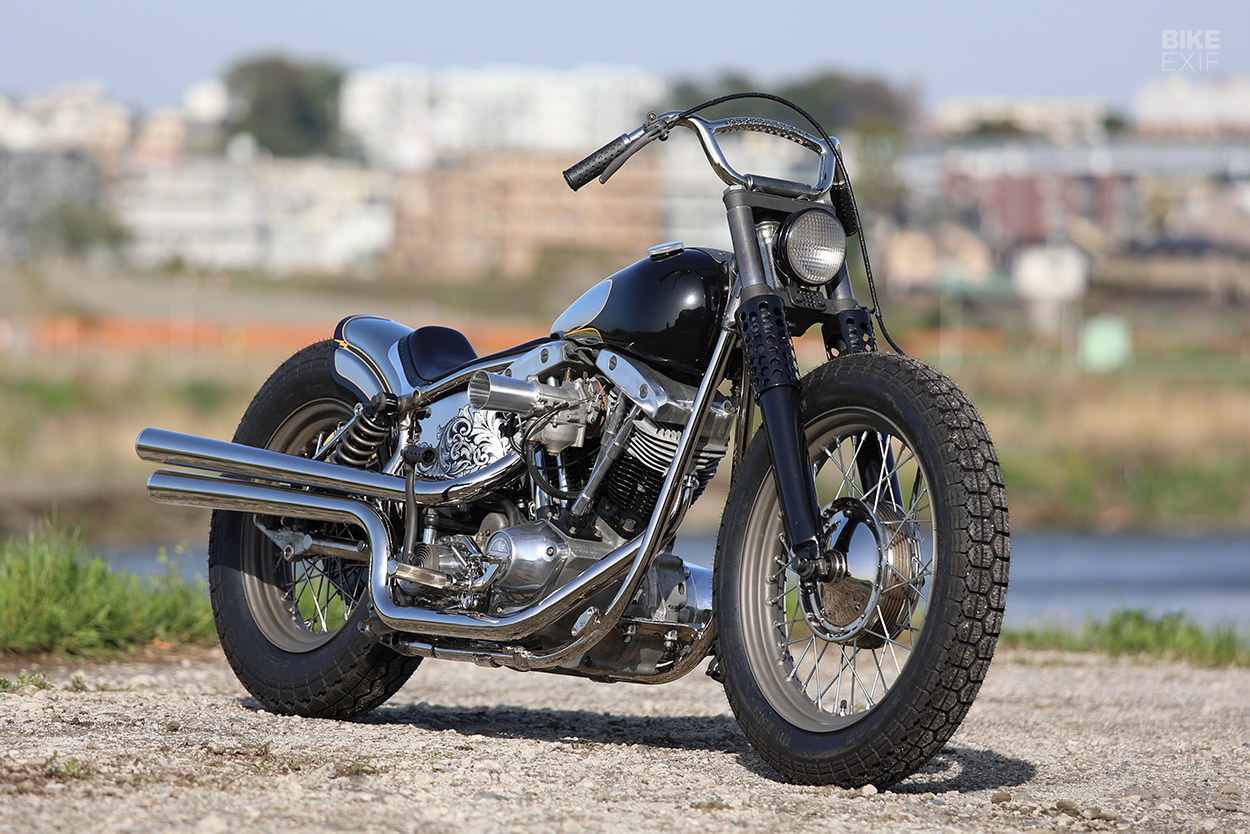 The Japanese custom scene sets rather than follows trends. Japan’s top builders each have a unique and instantly recognizable style, and the machines they produce are usually hard to pigeonhole.

This 1970 Harley-Davidson FLH Shovelhead from Hideya Togashi of Hide Motorcycle (that’s ‘Hee-day’) illustrates my point beautifully. Togashi-san’s client simply asked him to build a bobber, leaving the rest to the builder’s discretion. A wise move. 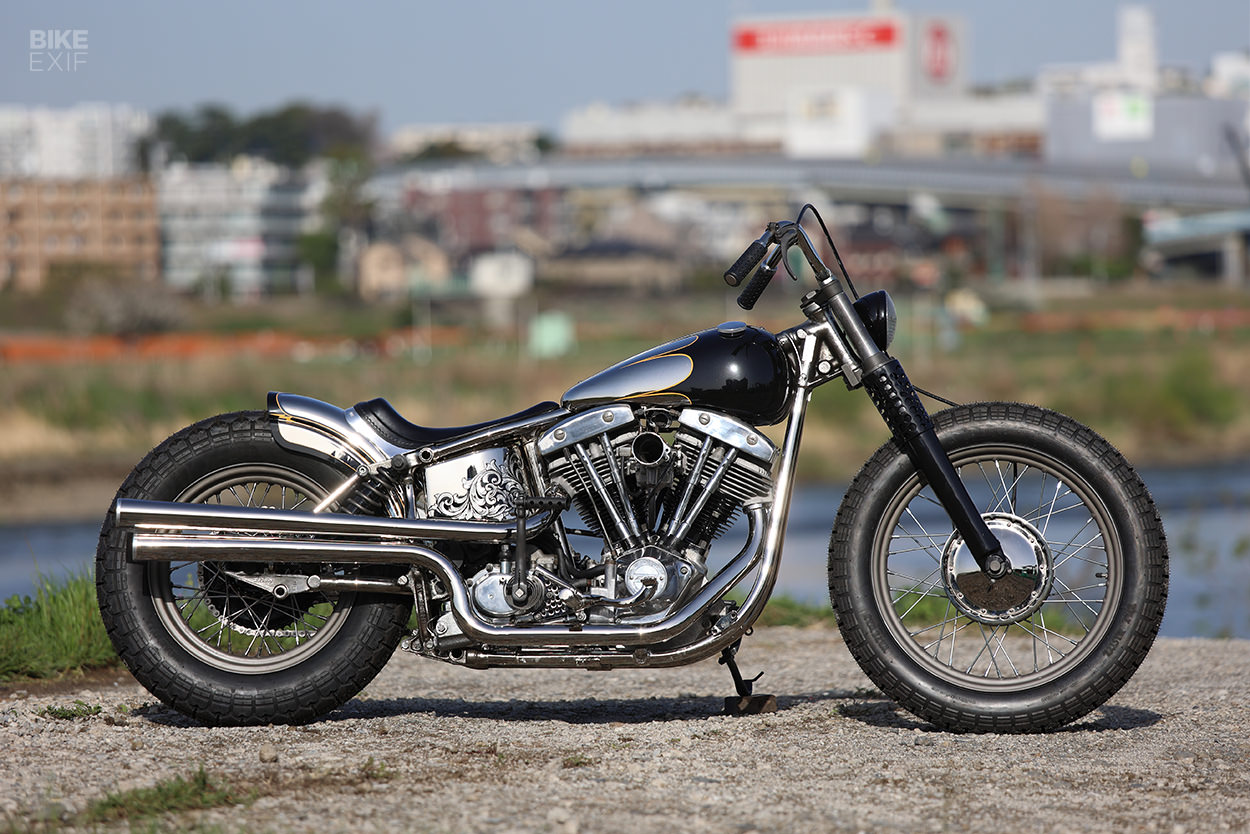 Taking loose inspiration from the boardtrackers of the 1930s, he blended together bobber and vintage tracker cues to build what can only be described as a Hidemo special.

Also known as the ‘Hydra-Glide,’ the Harley-Davidson FLH was a tourer with a fairing, panniers and a comically large seat. Little is now left of the original bike, save for its wheels, motor and frame—and none of those have been left untouched. 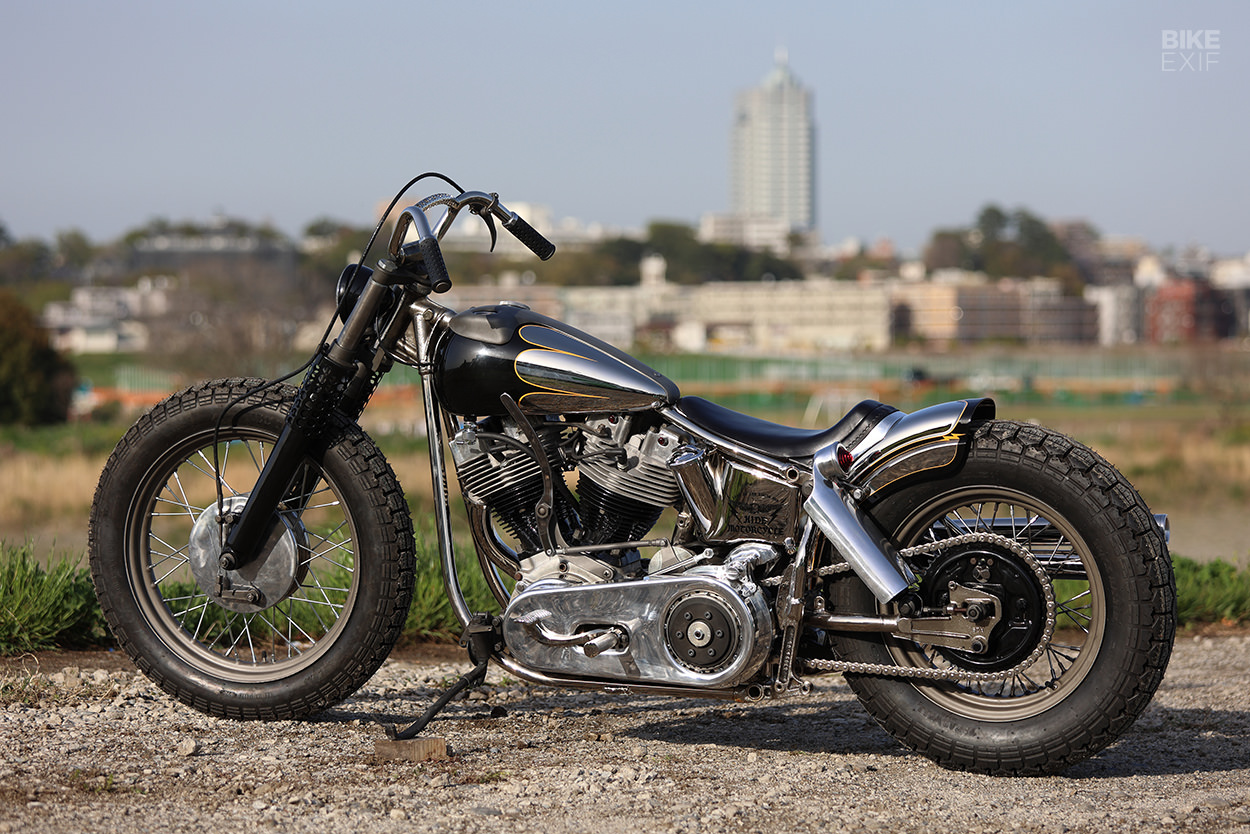 Hideya edited the frame, although he’s coy about exactly which parts have been changed. Then he narrowed the triples, and grafted on a 41 mm Shovelhead front end. The forks have been modified, and now wear a pair of drilled-out fork covers.

A pair of 13.5” Progressive shocks holds up the rear. 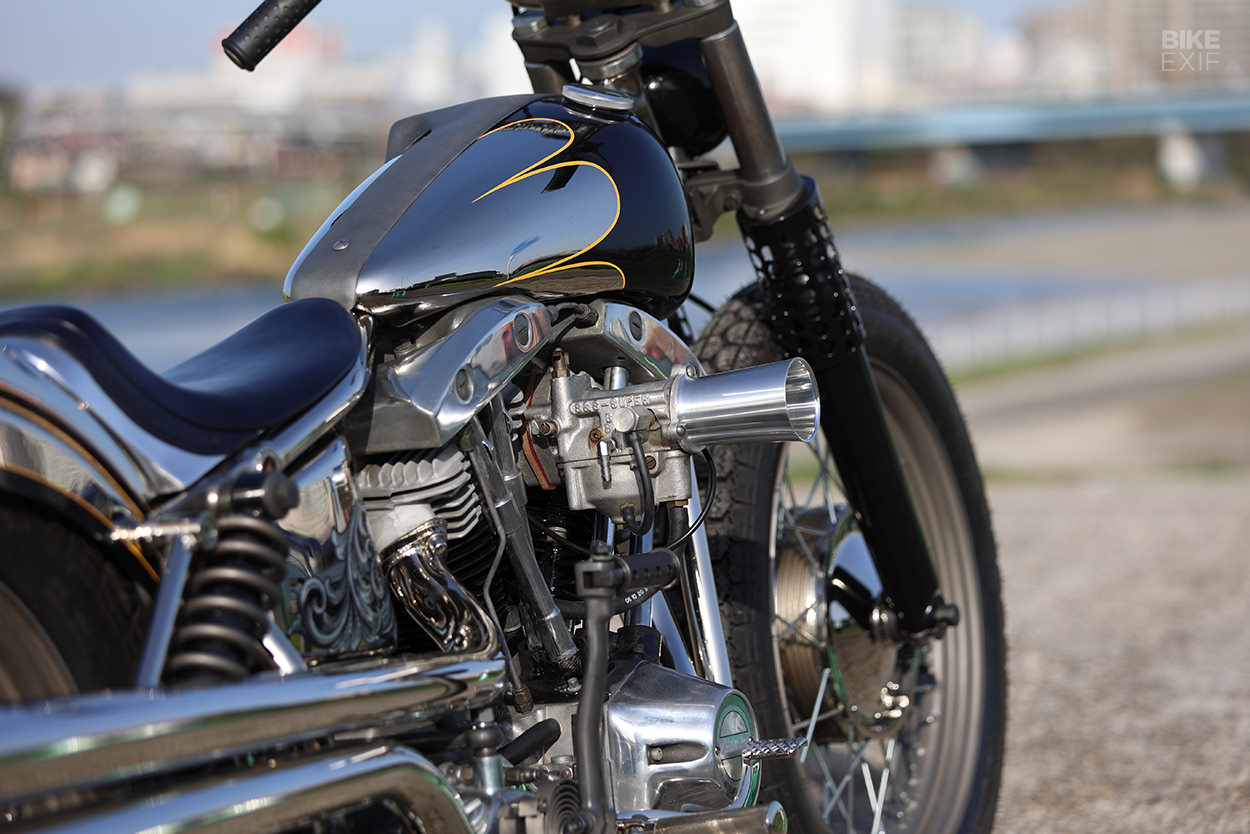 The front wheel rim was re-laced to a mechanical drum brake from a BSA, using a custom spoke set. The rear wheel is original, right down to the OEM sprocket-side hydraulic drum brake. Both ends wear vintage-style Treadwell Waveway tires: 4.00×19″ in front, and 5.00×16″ at the back.

Hideya tore into the motor too, bumping the capacity to 1,340 cc with KB Performance pistons, an Andrews cam, a Dyna S ignition and a 1½” belt primary. The carburetor’s from S&S Cycle, and is fed by a one-off velocity stack. The H-D’s also sporting a stunning pair of hand-built, nickel-plated exhausts. 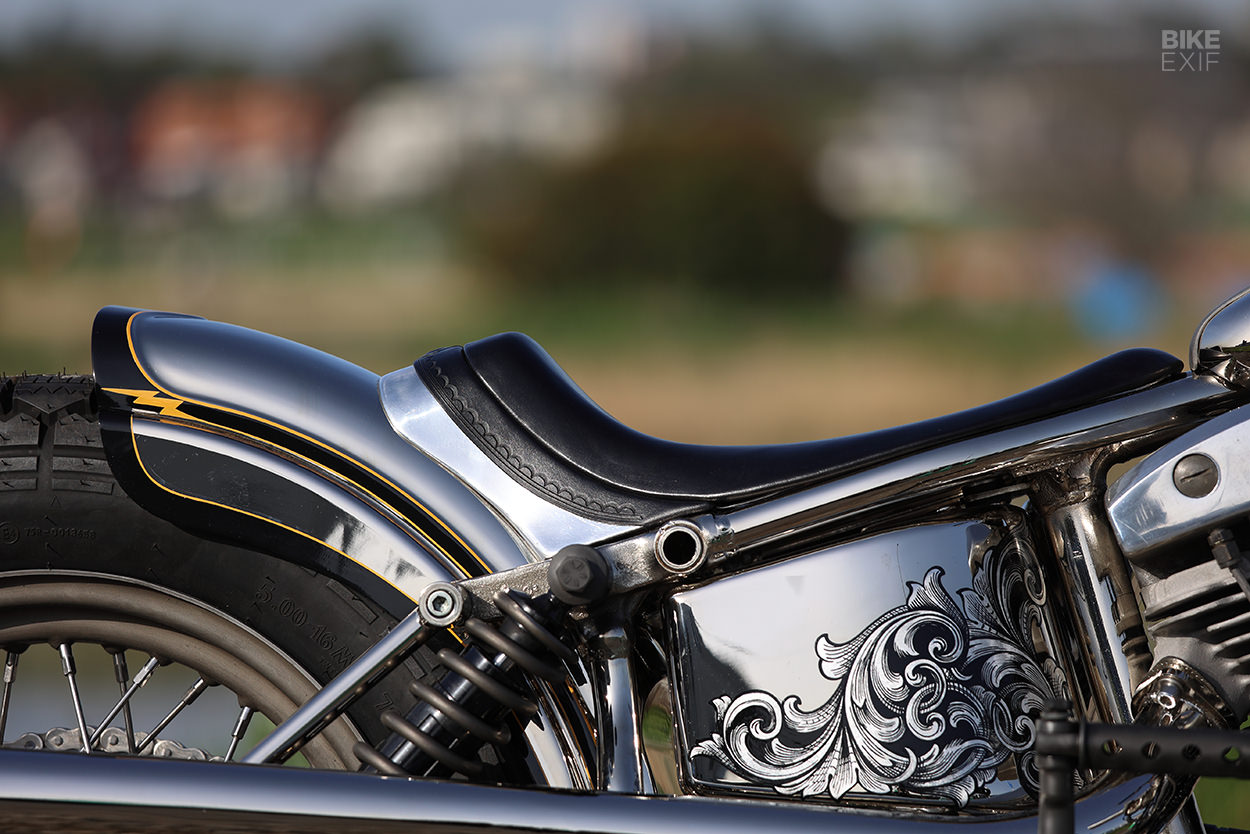 Up top is a custom steel fuel tank, capped off with a hand-made metal ‘strap’ that also houses the bike’s speedo. Hideya also built the oil tank from scratch, and shaped a new seat pan and rear fender from aluminum. Atelier Cherry handled the upholstery on the scooped solo saddle.

The Harley’s new handlebars are custom, and wear Nice Motorcycle grips and an internal throttle. Keen eyes will note the lack of a clutch lever—that’s because this build uses a foot clutch, with a custom suicide shifter sitting to the left of the tank. 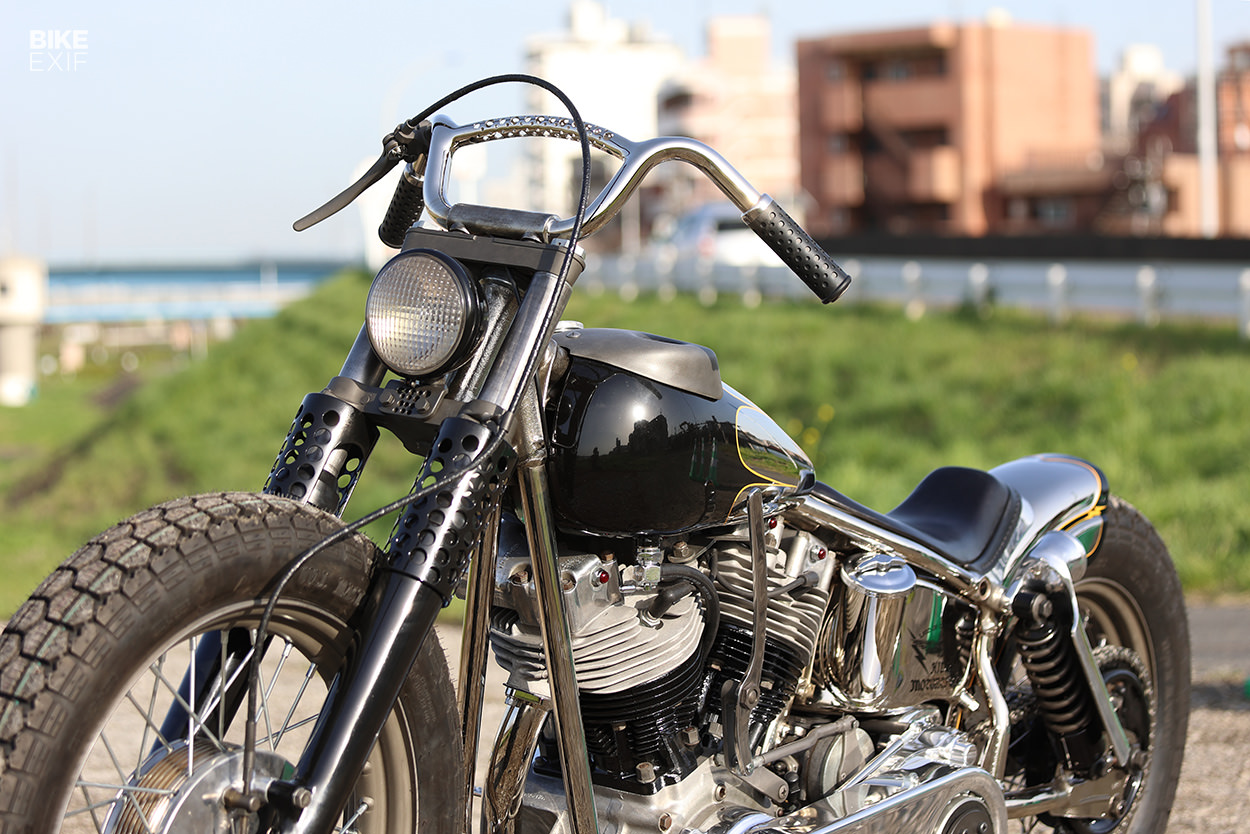 Out front is a repurposed vintage tractor light, and out back is a side-mounted plate holder, wrapped around the shock with an integrated Hide Motorcycle taillight.

There’s hardly an inch on this Shovelhead that hasn’t been modified, or made from scratch. Smaller bits like the kicker pedal, foot pegs, and drilled foot control mounting plates are all one-offs. Every last detail’s been considered—like how the drillium on the handlebar cross-brace matches the grips. 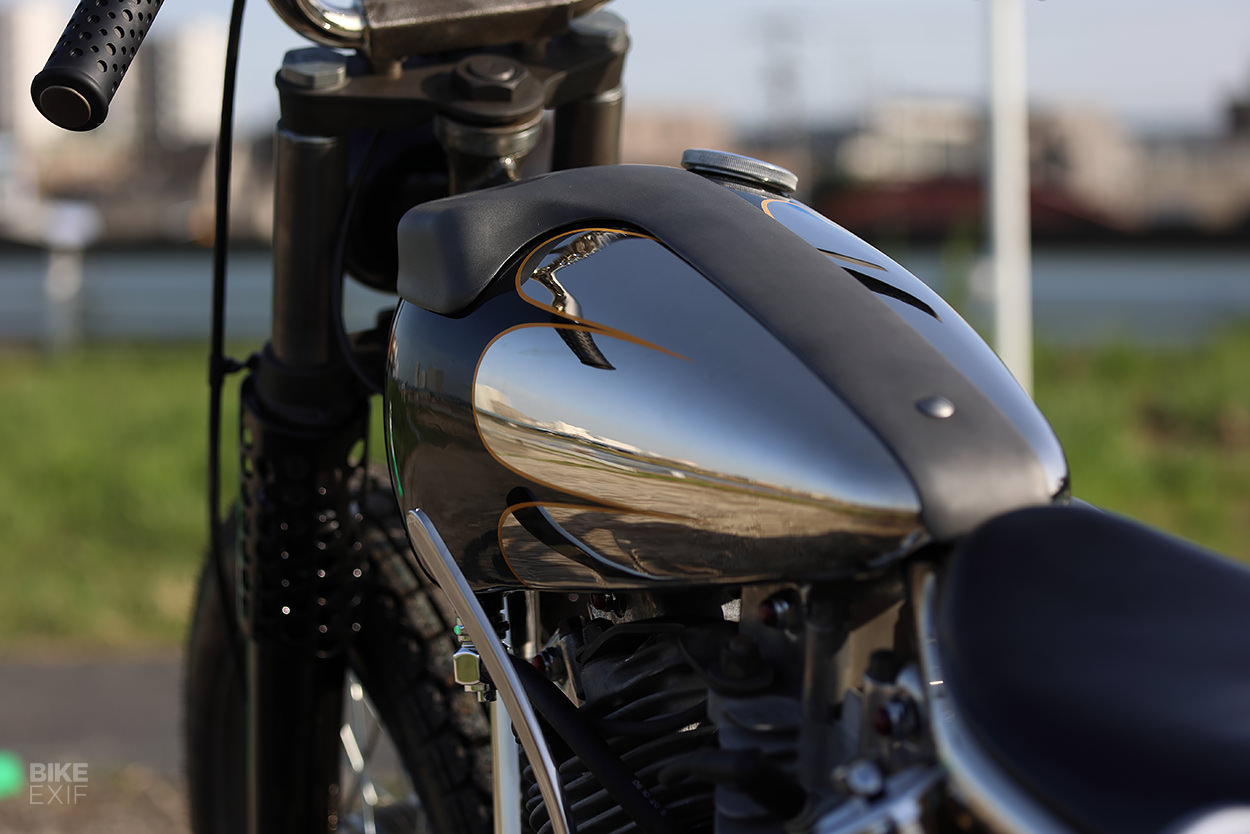 Equal consideration has gone to the Harley-Davidson’s final finishes. The fuel tank, oil tank, fender and frame have all been nickel plated, with a scalloped design shot over the bodywork by Skop Art Works. Parts like the engine covers have been polished, while items like the wheel rims and rear shock spring have been finished in a duller, almost pewter-like color. 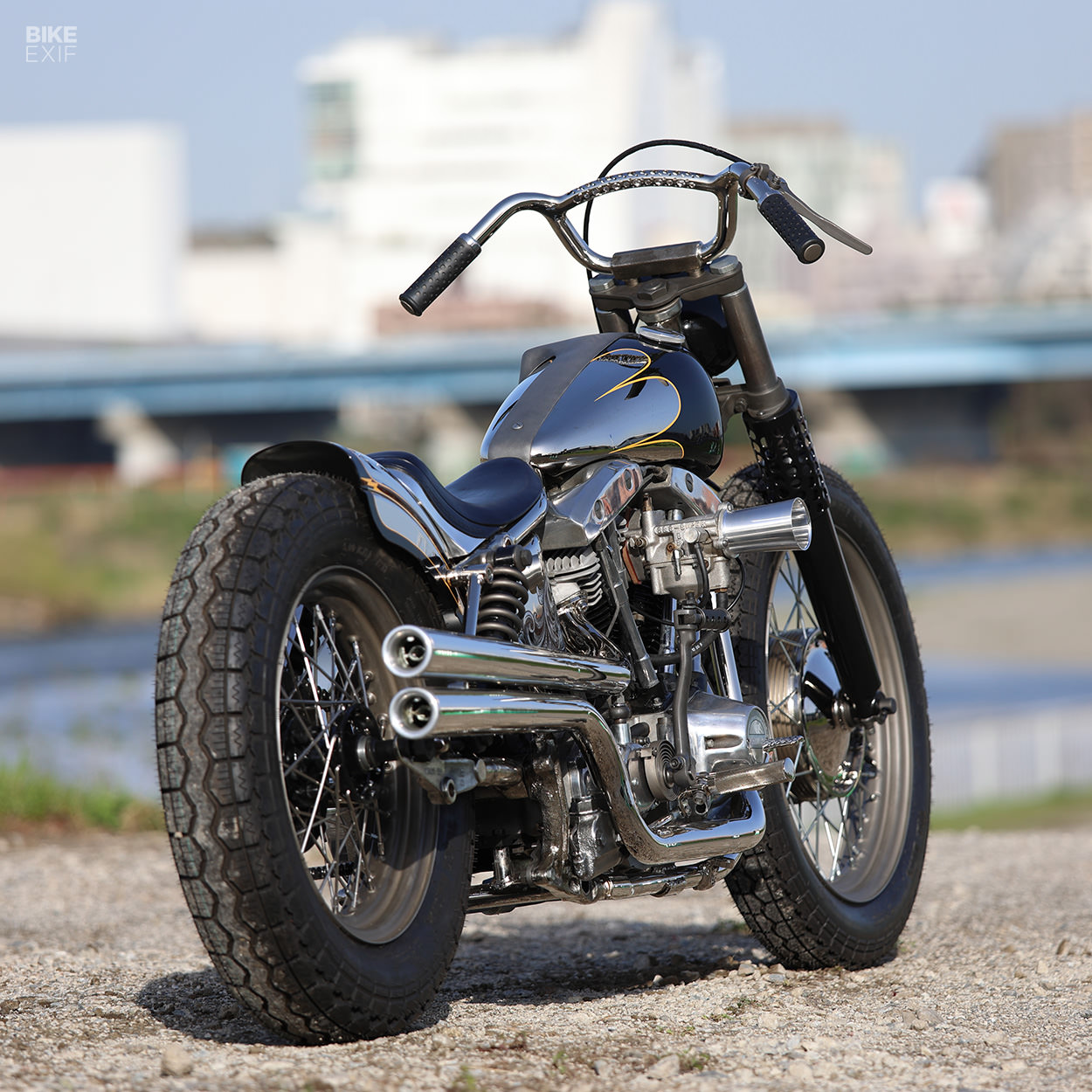 It’s a stunning entry into the Hide Motorcycle portfolio that proves that Togashi-san is at the top of his game. And it’s shiny reminder of why we love Japan’s inimitable custom scene so damn much. 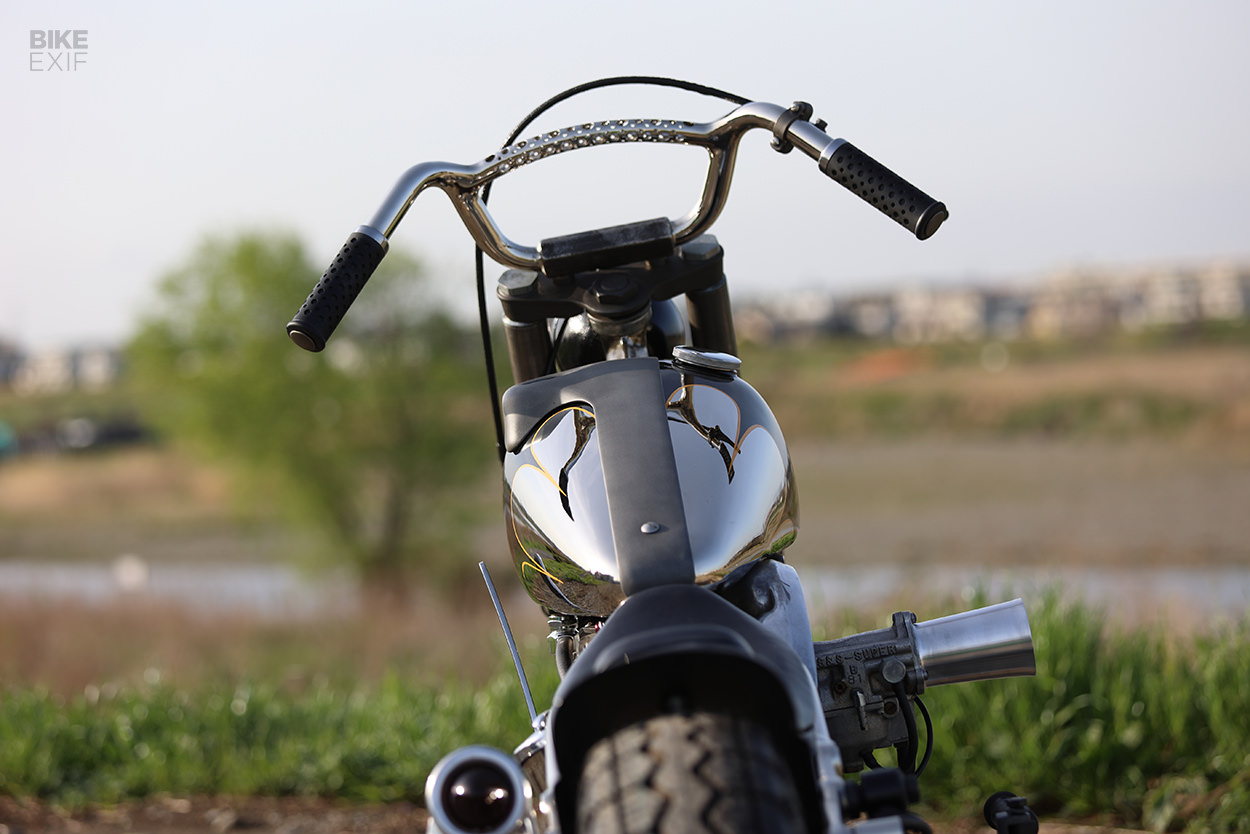