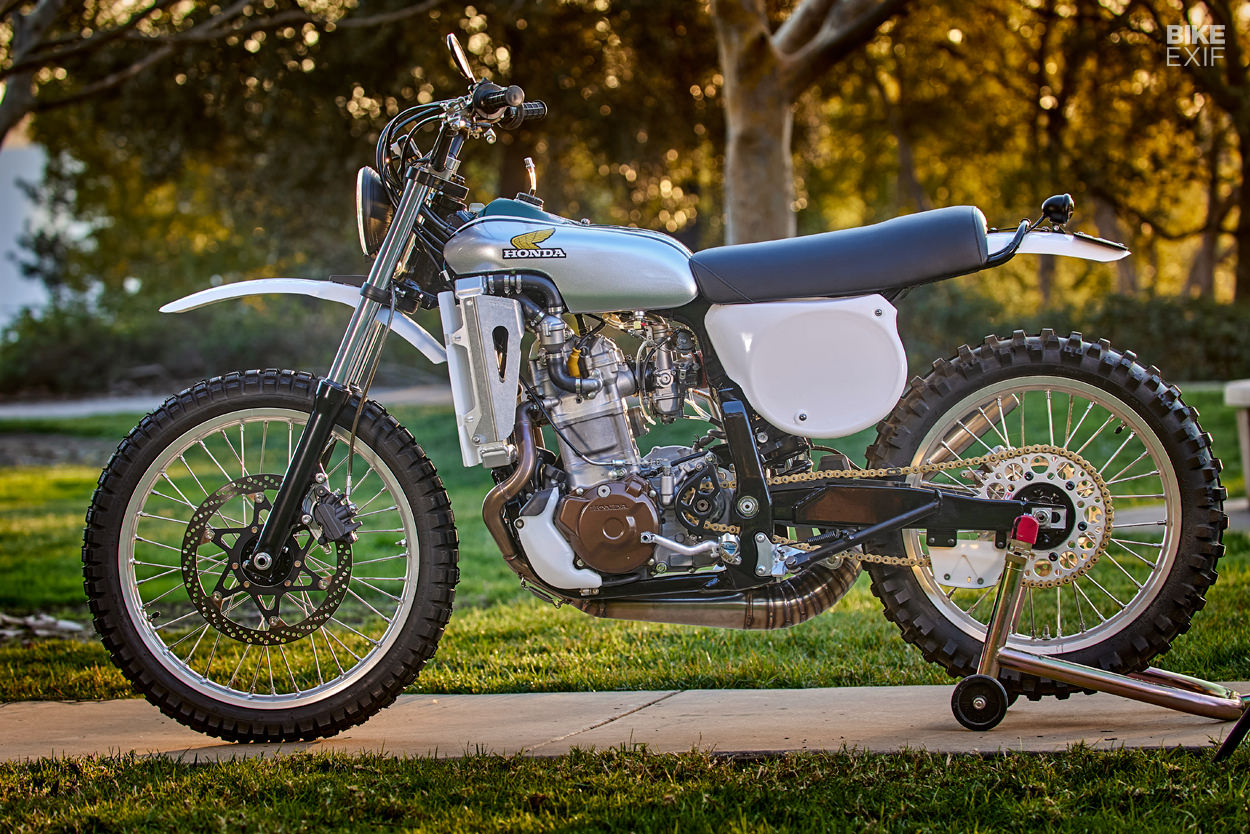 Repeat custom is the lifeblood of most businesses, including bike builders. Ten years ago, Matt Helders bought a very sharp Triumph T100 from Richard ‘Mule’ Pollock—and he’s just gone back for more.

This time, Matt has taken delivery of an absolute weapon: a crisp, vintage-style Honda with a most unusual exhaust system. And despite the knobby rubber (for road use and the photo shoot), it’s street legal. 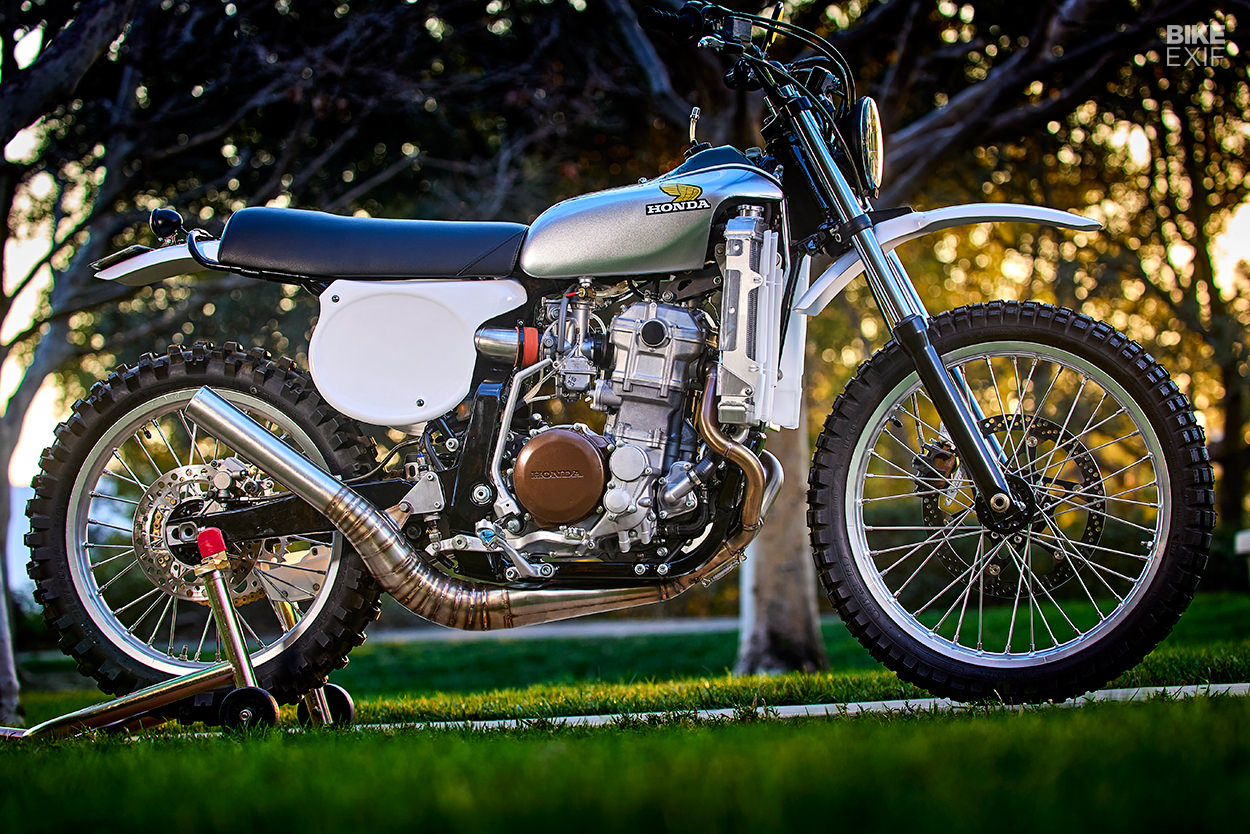 If you know the name Matt Helders, that’s because he’s the drummer of the hit British rock band Arctic Monkeys. The band has sold well over 20 million records worldwide, so Helders could probably have chosen any custom builder he wanted.

Mule, however, is a singular talent. And there’s nothing else on the road (or off) quite like this Honda. 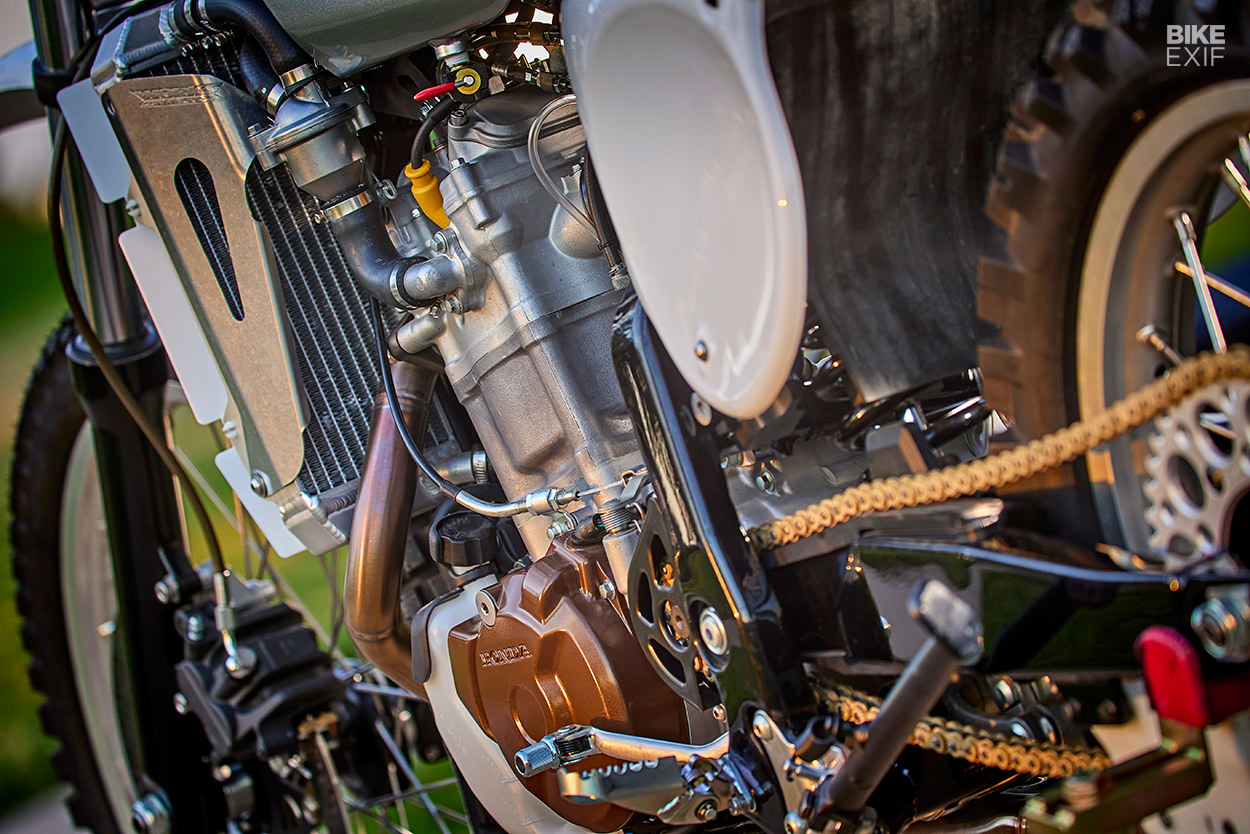 “This build started life as a 2000-spec XR650R,” Richard reports. “Matthew asked for a modern-ish dirtbike that looked like a 70s motocrosser. So I decided the look would resemble a 1973 CR250 Honda Elsinore—with the same paint scheme!”

The XR650R is more of a desert racer than motocrosser, with a tough liquid-cooled single pumping out just over 60 hp. Dry weight is just under 300 pounds, helped by the aluminum frame and lightweight engine, so performance is spritely even by modern standards. 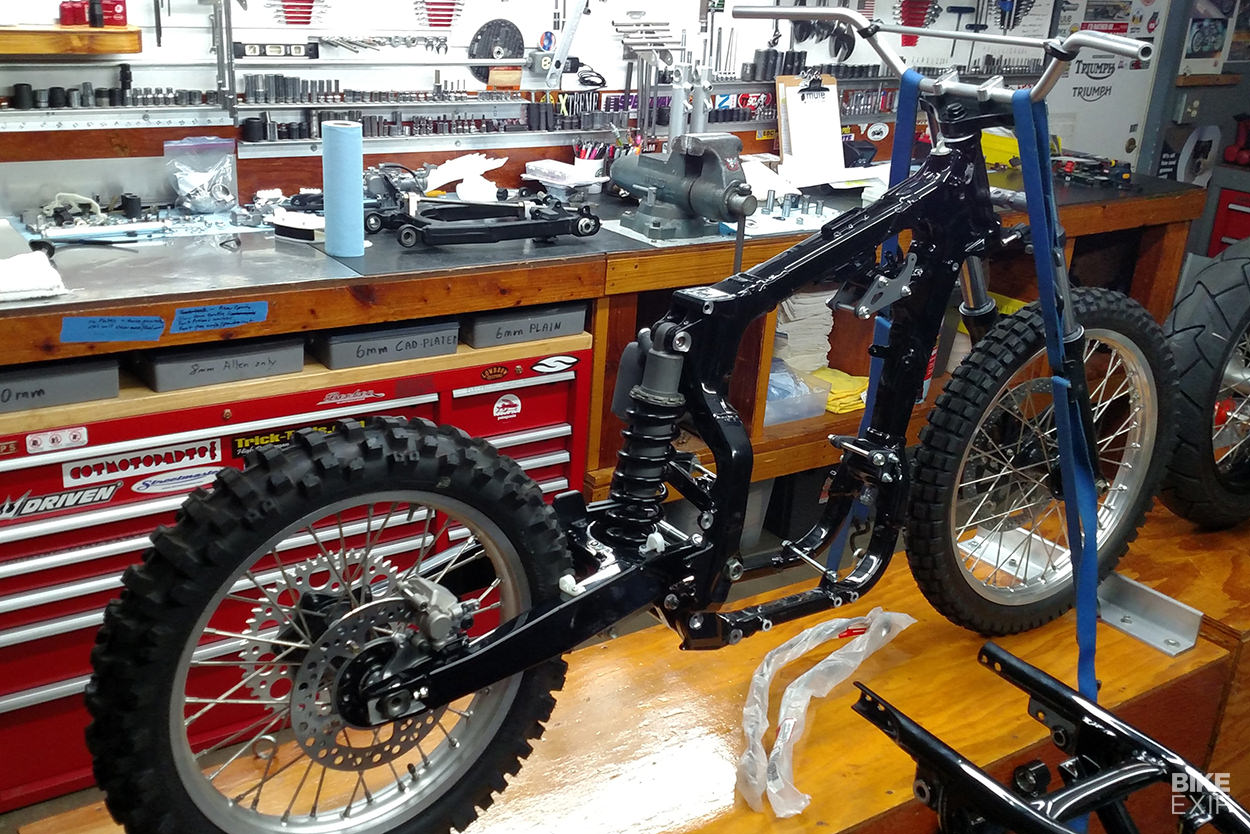 Mule started by stripping the XR650R down to the frame, and started optimizing the suspension setup.

“I shortened the shock to lower the stance slightly, and installed a Triumph Bonneville lower triple clamp,” he says. That had the most offset, for light-to-the touch steering. 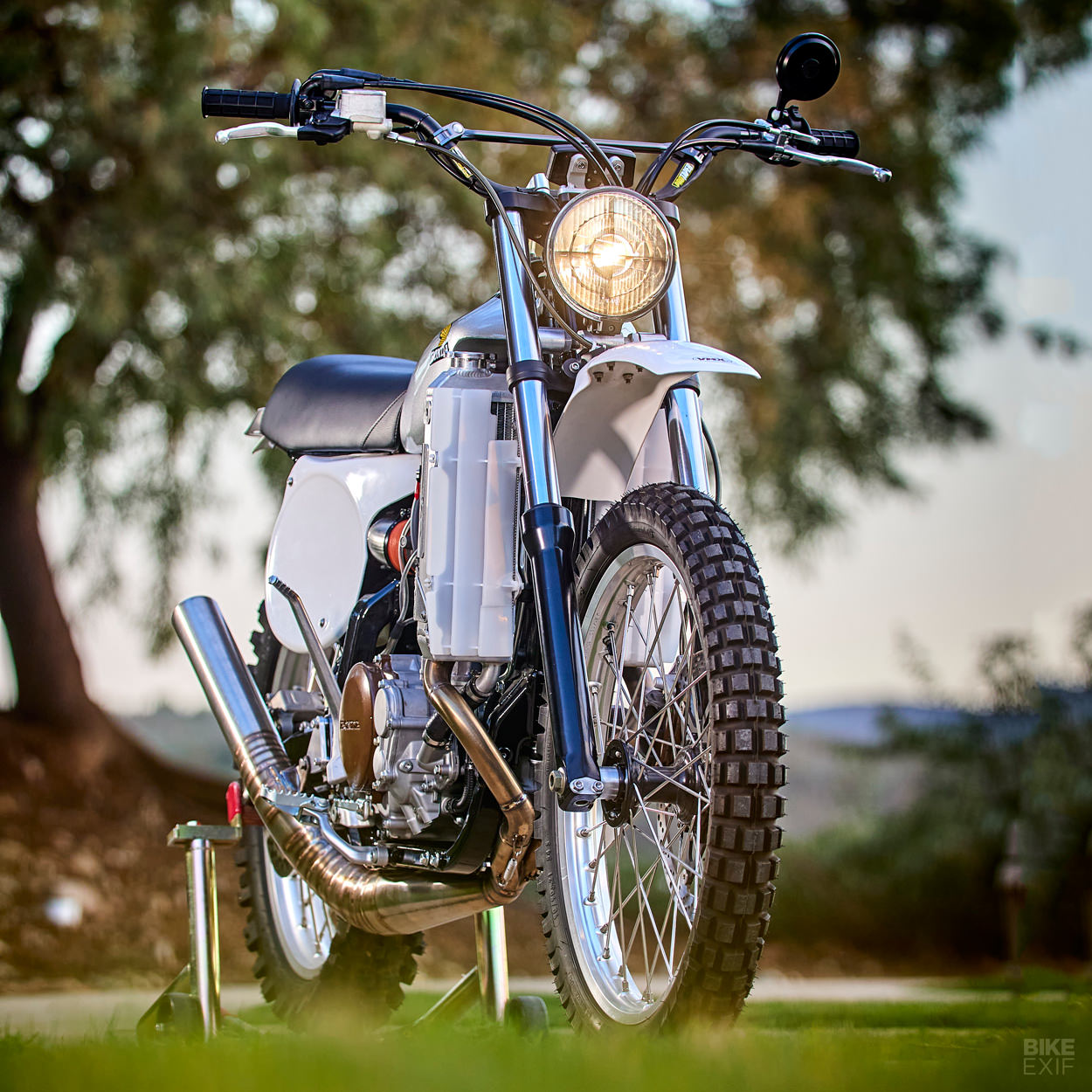 The original Honda fork stem is now matched to a billet top triple clamp, from Cognito Moto. And the forks, although older than the rest of the bike, are an upgrade for road use.

Mule liberated them from a 1993 Honda Hawk 650GT: “They’re 41mm longer than most conventional forks, and super light.” The wheels are light too, for spoked rims, and taken from a CRF450R. 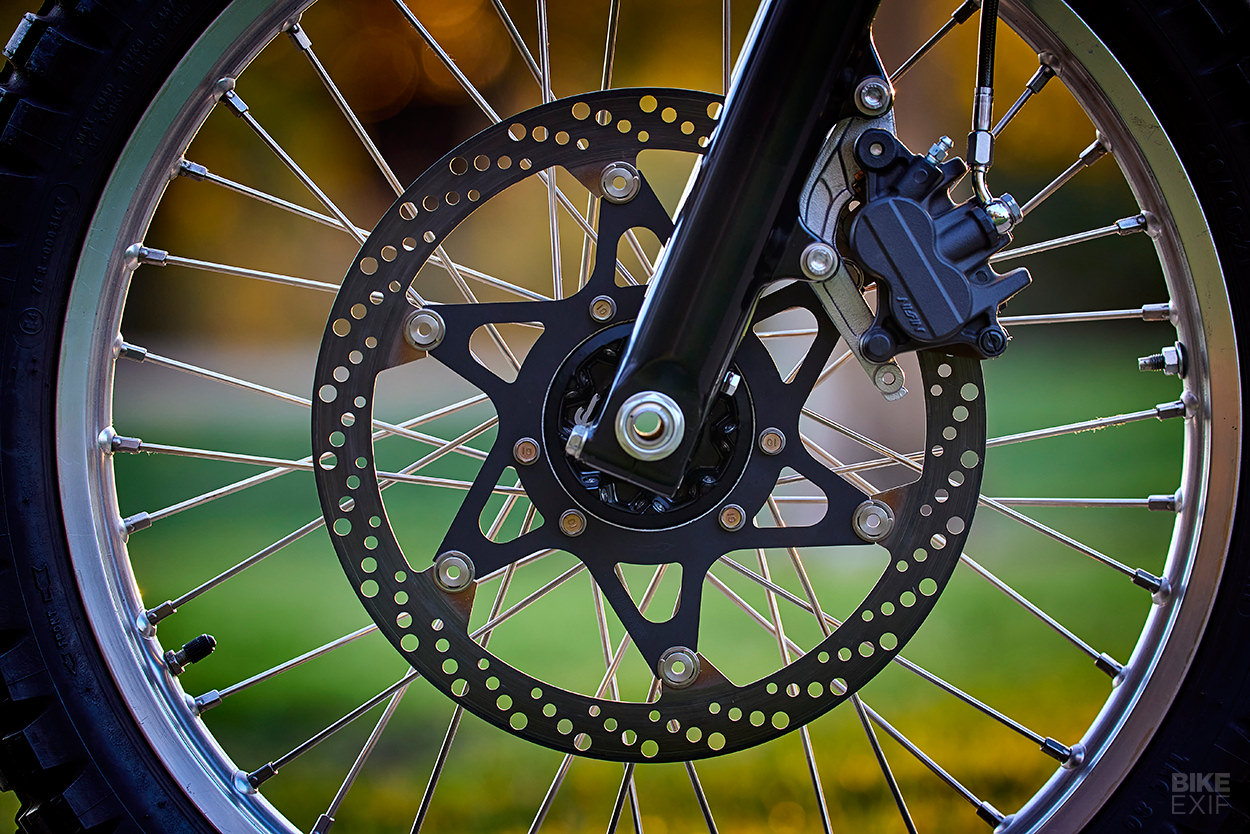 The front brake rotor is a Magura Supermoto unit, but the caliper is from a Triumph Bonneville. “As this will see occasional road use, I went with the bigger brake,” Mule reveals. “The tires are for the dirt and the pictures!”

If you’ve successfully identified the tank, give yourself a pat on the back. It’s from a mid 70s Yamaha MX400, highly modified and trimmed to fit. It’s as far from a bright red plastic cover as you can get, thanks to aluminum construction and a lovely, low-key paintjob inspired by the CR250 Elsinore. 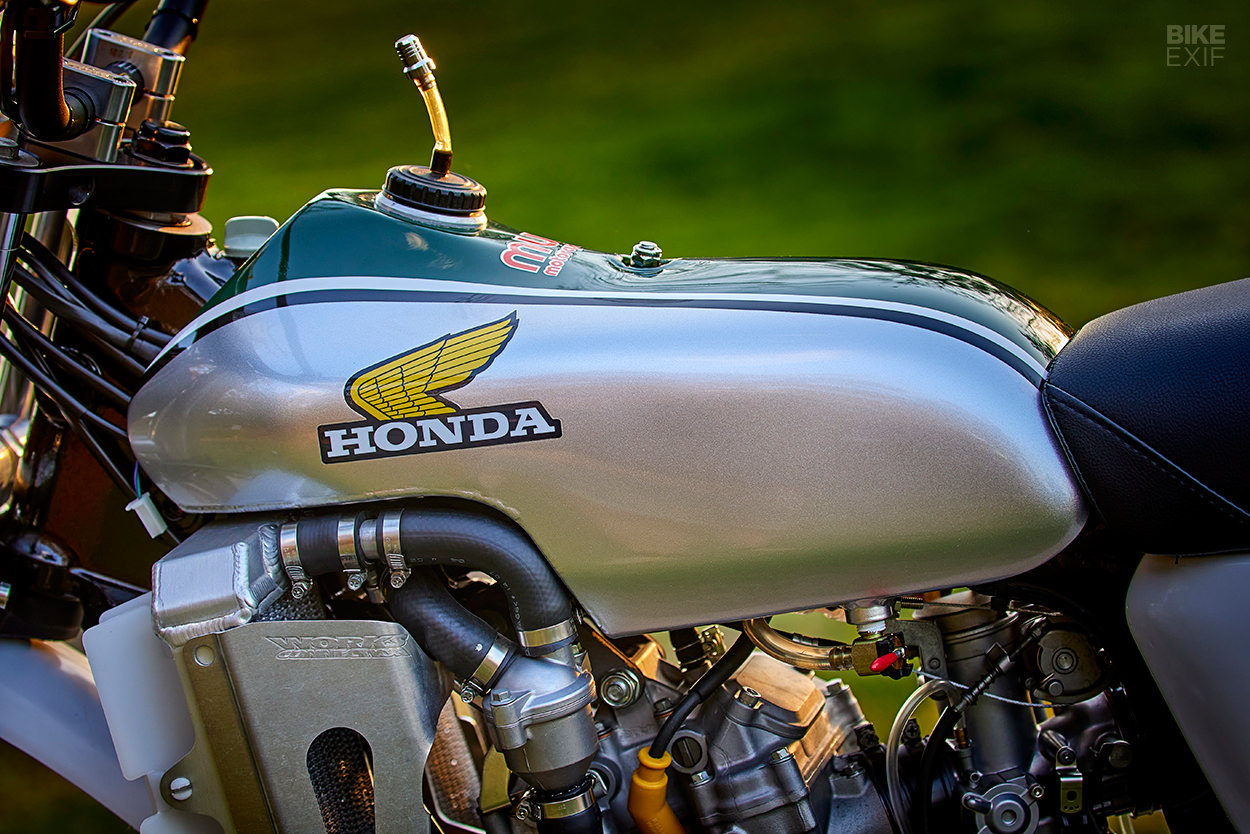 The cutaways in the tank—for the radiator and plumbing—must have been difficult to get right, but Mule singles out the elegant, vestigal subframe as the ‘major task.’

“I got a junk CR250 and cut the subframe off,” he says. “Then made a wooden ‘fixture’ and bent new cro-moly tubes. It uses the original rear fender mount section, and a side-to-side support for the seat.” 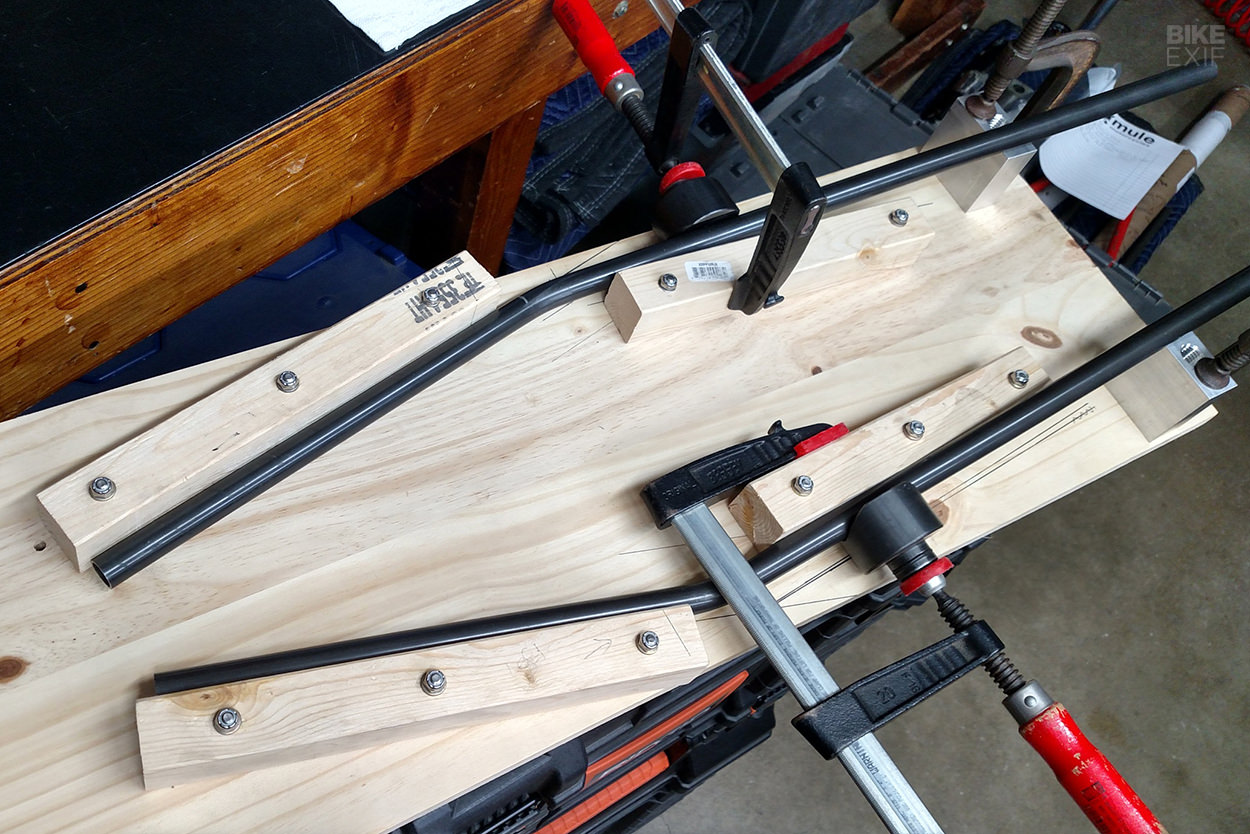 “That was all done so that a stock CR250 seat could be fitted. Which it didn’t. I ended up getting a one-off seat made by Saddlemen!” The rest of the bodywork was a simpler operation: the side number panels and fenders are CR250 Elsinore reproductions from VMX Racing.

On the mechanical front, Mule went through the four-valve SOHC 649cc motor from top to bottom, replacing multiple parts to get it back to as-new spec. “Radiators, hoses, cables, chain and sprockets and every single nut and bolt are new,” he reports. 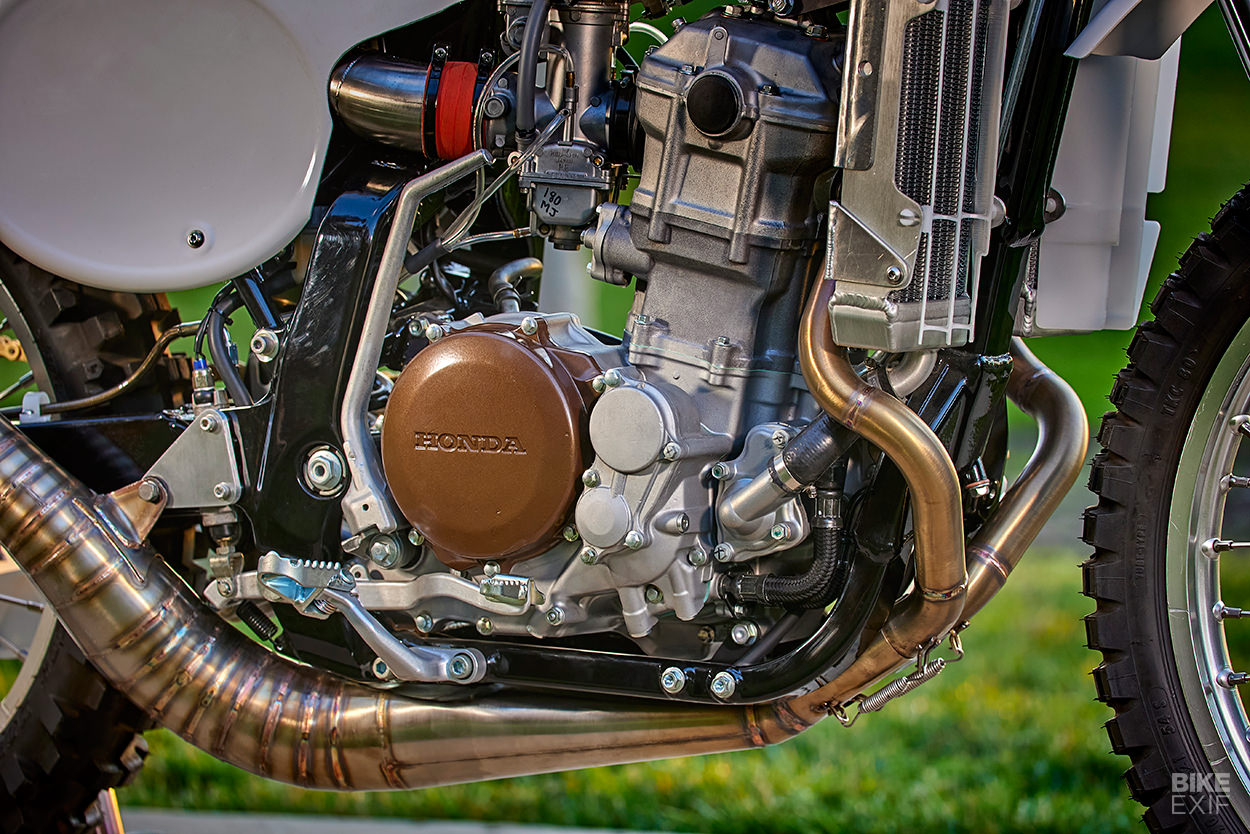 But what about that exhaust? “The exhaust was made to look like a two-stroke chamber,” Mule says, “but it’s a four-stroke pipe internally.” The expert craftsmanship is by regular collaborator Randy Blevins, and will no doubt create lots of confused looks from bystanders.

The legalities are covered off with a simple taillight, a classic Piaa headlight, a mirror clamped to the ProTaper bars—and a small Acewell gauge. 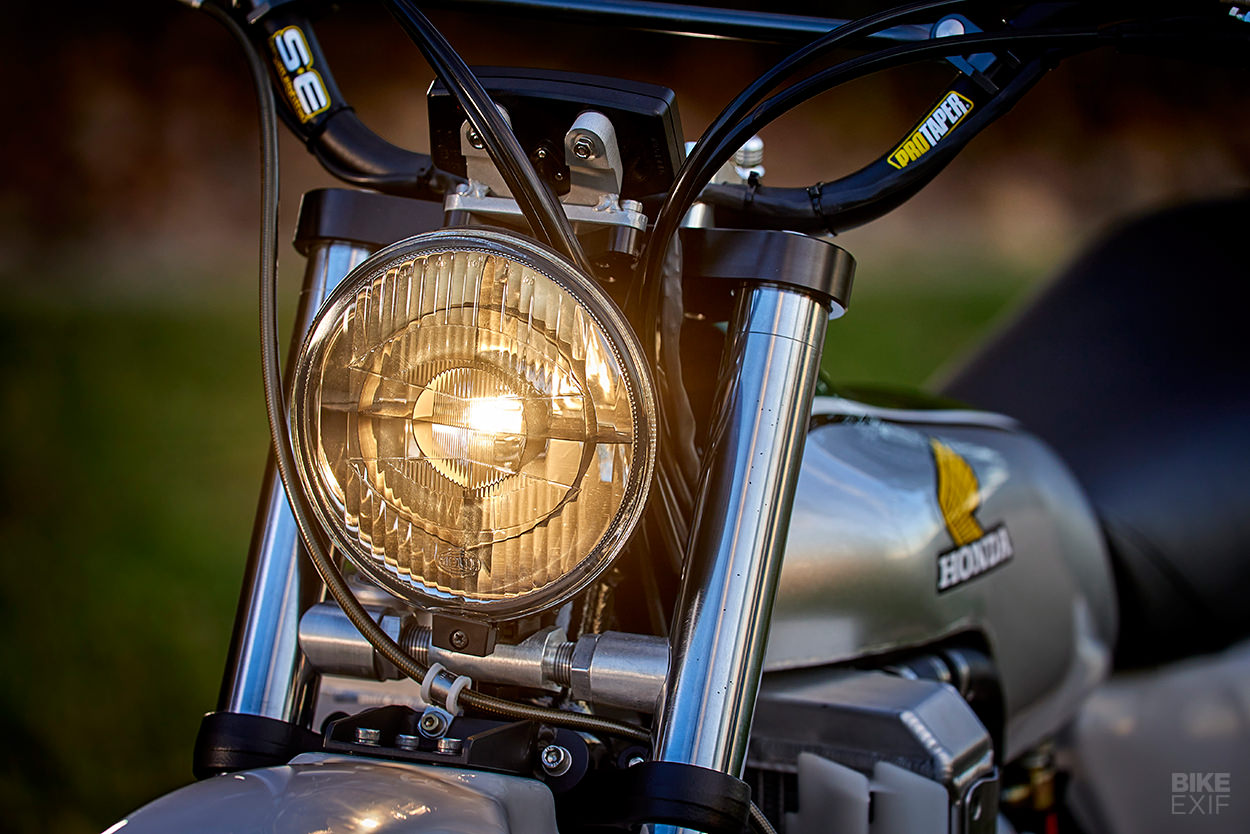 Knowing Mule’s technical prowess, this machine will be a blast to ride.

Let’s hope Matt Helders gets enough free time to put his sticks down, and get some solid miles onto the XR. 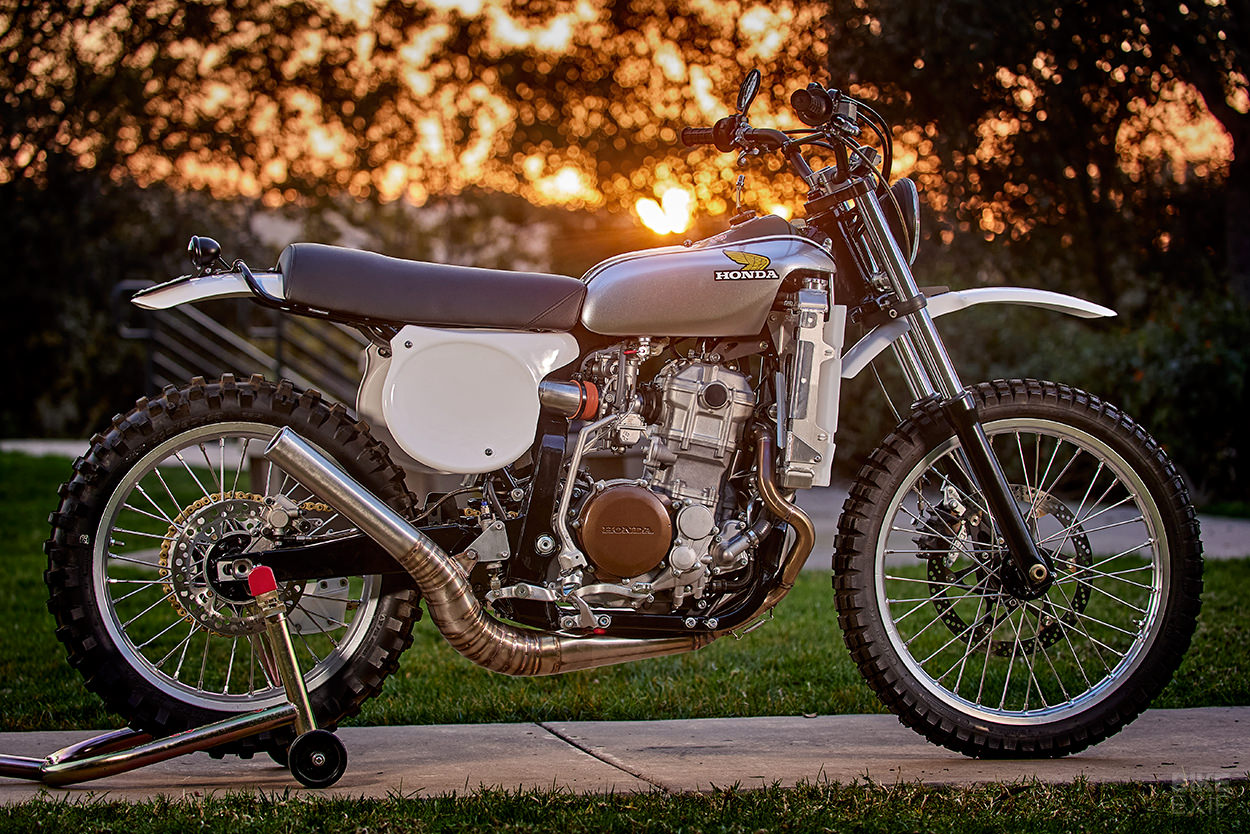