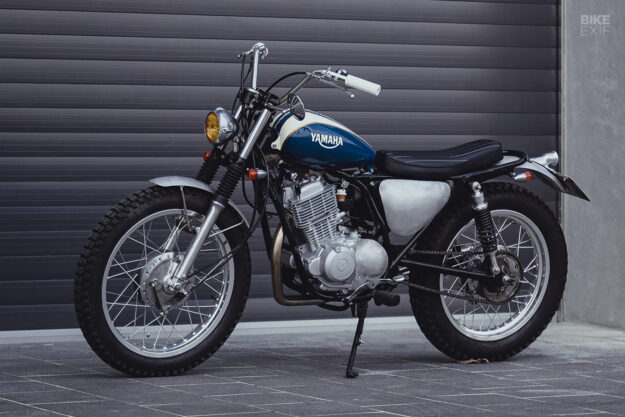 Yamaha’s beloved SR has come in an array of sizes over the years, all closely resembling each other. Of all of them, the SR150 is an outlier. The now-defunct single was manufactured in Taiwan exclusively for the Taiwanese market, with a few visual differences from its Japanese cousins.

Even though the SR150 didn’t quite have the same timeless vibe as the rest of the range, it still sold like hot cakes. Since it was built locally, it incurred less sales tax—so it was cheap and readily available. Rough Crafts frontman Winston Yeh’s first bike was a second-hand Yamaha SR150, and it cost him just $700. 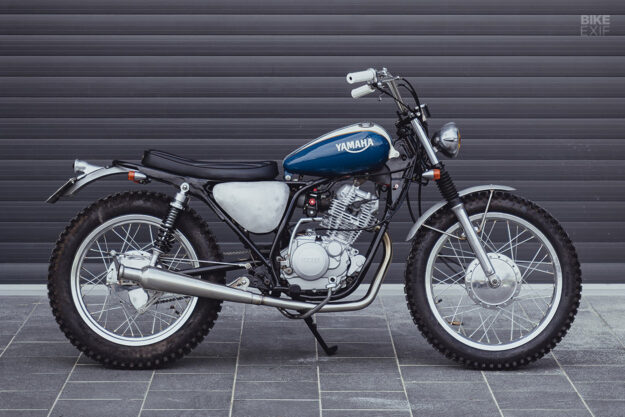 This custom 1997-model SR150 scrambler is just as cute as any other SR-based custom we’ve seen. It’s the work of Twist.Co—a two-man custom shop based in Taichung City in central Taiwan. They’ve been in business since 2016, and split their time between building custom bikes and making parts.

Twist.Co got the commission for this build from a client, with a mandate to build something “simple and elegant.” With some tasteful tweaks and tidy fabrication, they knocked it out the park. 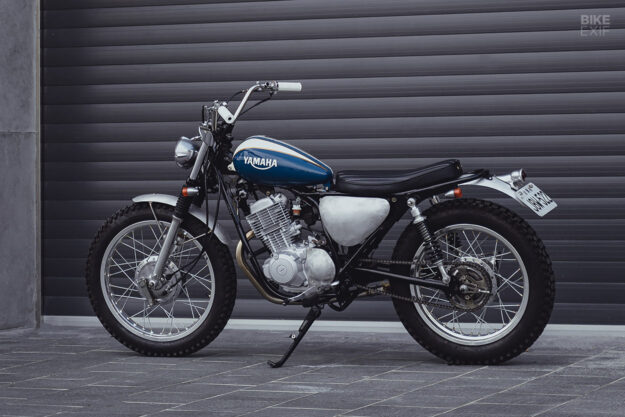 Step one was to tear the SR150 down to its frame, and bin the stock bodywork. The duo modified the subframe next, and extended the swingarm to fettle the overall proportions. Sitting atop the new subframe is a svelte three-quarter length seat, wrapped in leather with contrasting stitching.

A new set of shocks was fitted, and the stock drum brake hubs were laced to 19F/18R rims, to help bulk up the petite Yamaha. They’re shod in Taiwanese-made Duro tires. 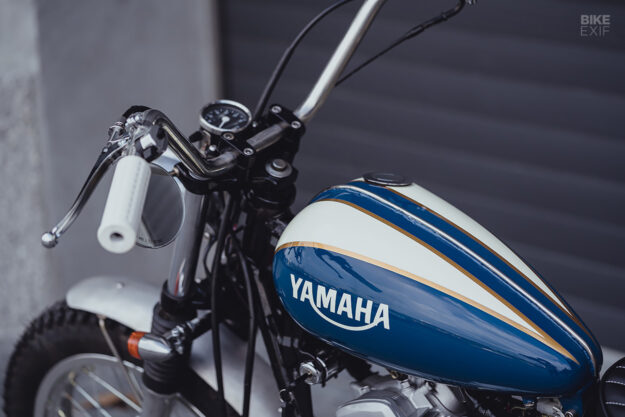 Twist.Co wanted to add a unique touch to the SR150SR150, so they settled on fabricating their own fuel tank rather than repurposing one from elsewhere. Putting their metal shaping skills to work, they built a teardrop-shaped unit with a polished stainless steel ridge running over the top, and a pop-up filler cap.

The tank wears the only splash of color on the bike. A third party painted it in a stunning blue, white and gold livery, with ‘swooshed’ Yamaha logos that mimic classic Triumph branding. 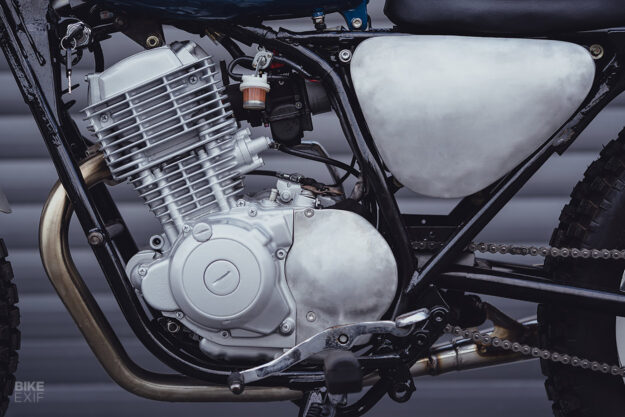 The aluminum fenders, side covers and front sprocket cover are all Twist.Co’s handiwork too. Those parts were treated to a buffed aluminum finish, adding a raw metal feel to offset the vivid fuel tank paint. The engine was cleaned up too, and now looks factory fresh. 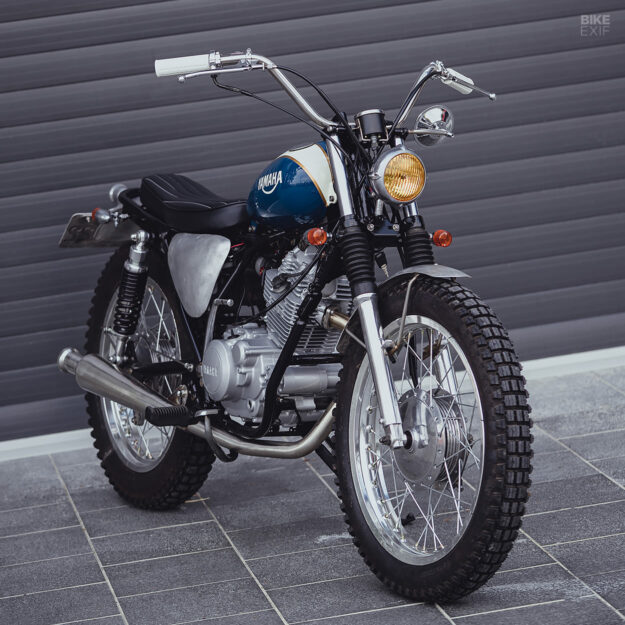 Next, Twist.Co turned to fellow Taiwanese custom shop, 2LOUD, to bend a set of custom handlebars. They wear vintage-style grips, levers and mini-switches. A single mirror is cleverly mounted off the top yoke.

A vintage center-mount headlight sits up front, mounted with a custom-machined spacer to position it. The rest of the lighting, from the bullet turn signals to the generous taillight, looks equally retro, as does the compact analog speedo. 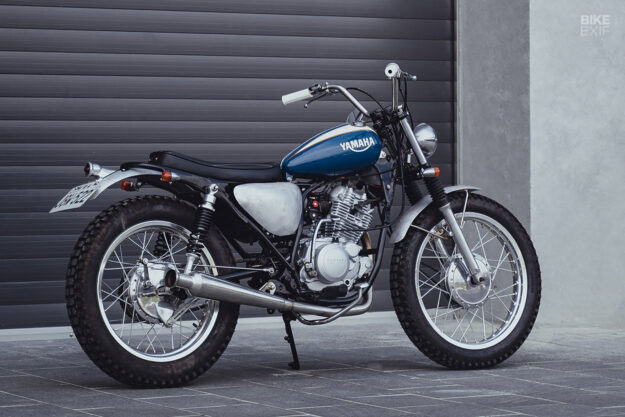 Elsewhere, the guys installed a NIBBI Racing carb; the red knob you see on the side operates the built-in choke. A hand-made stainless steel exhaust system finishes the SR150 off nicely.

This charming scrambler might be based on a lesser-known variant of the iconic SR, but you wouldn’t say so by looking at it. Thanks to Twist.Co, it’s a worthy inclusion into the annals of Yamaha SR customs. 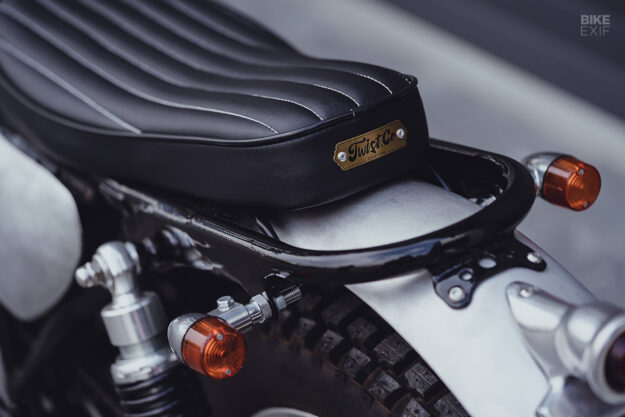