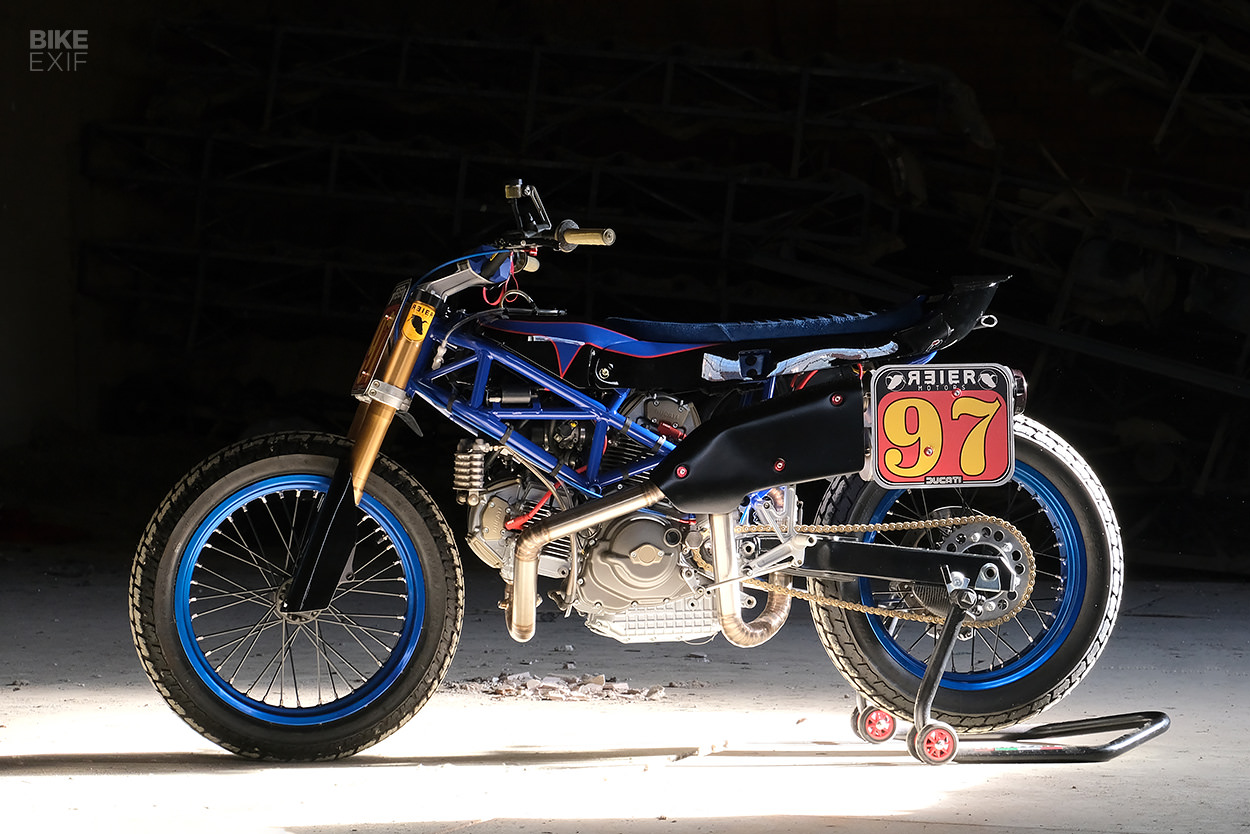 Flat track racing covers a whole spectrum of participation levels—from pro leagues to grassroots ‘run what ya brung’ events. And that’s great for the custom scene, because the looser the rules are, the more creative builders can get.

Christian Reier get his kicks on this rowdy Ducati Monster flat tracker. The 2001-model 900 i.e. might seem like an unlikely candidate for flat track racing, but the founder of Salzburg’s Reier Motors is unfazed. “I love to ride flat track and I am a huge Ducati fan,” he states plainly. 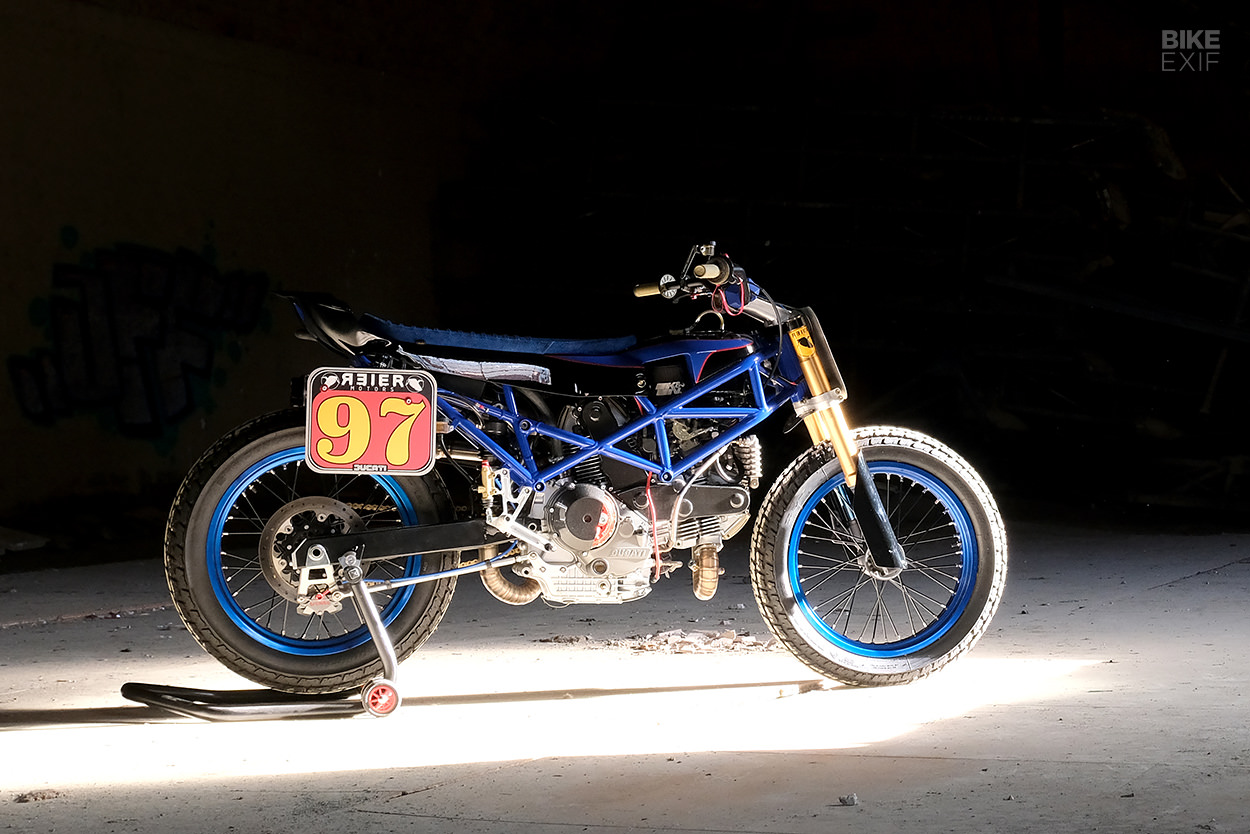 His weapon of choice is an intriguing interpretation of the genre that not only looks bonkers, but ticks all the right boxes in terms of stance and ergonomics too. And the way that the overall design complements the Monster’s iconic trellis frame, makes it that much sweeter.

But to convert the Ducati from roadster to flat tracker, Reier Motors first had to fettle its chassis. And that meant cramming a set of 19” race wheels in there. 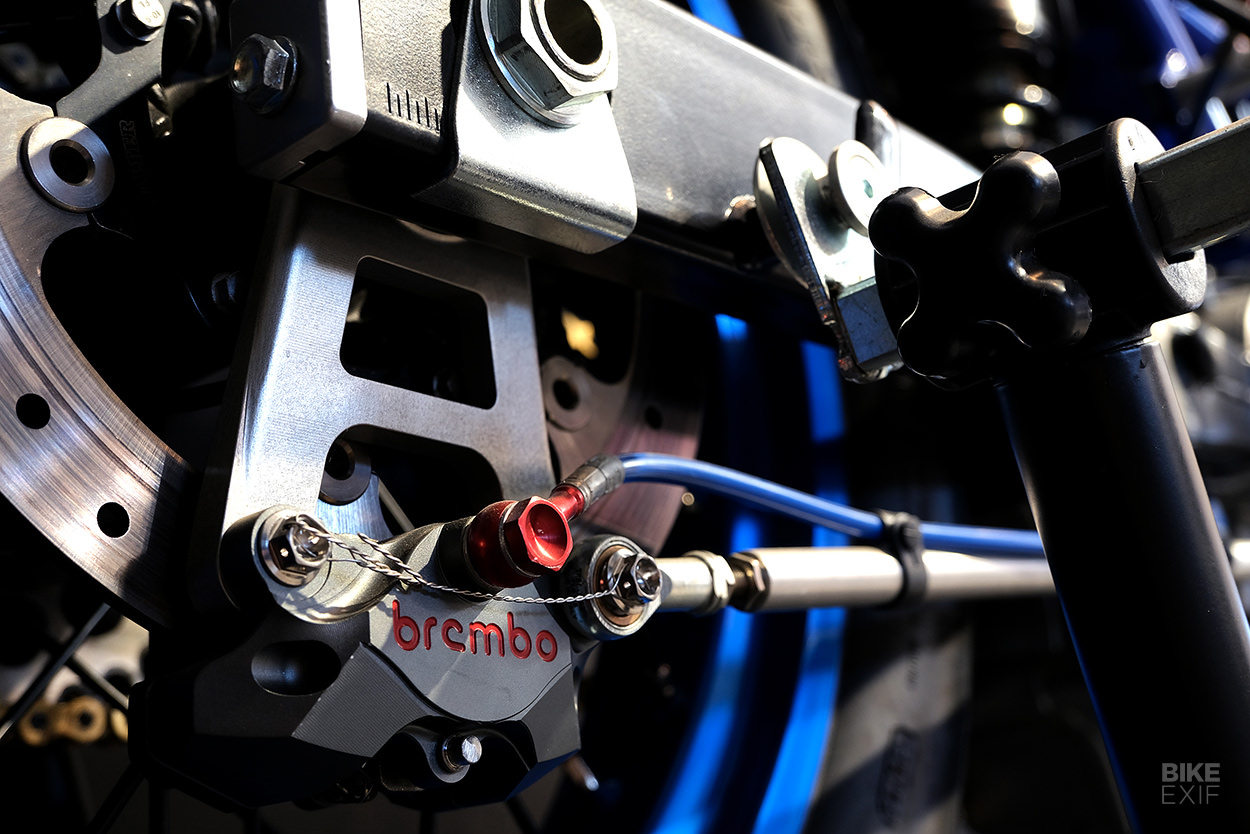 At the back, the swingarm had to be extended to make room for a bigger wheel. A new rear rim was then laced to a KTM 1190 Adventure hub, and the shock swapped for a new one from HyperPro. Reier also installed a Brembo brake caliper with a floating disc out back, along with a custom brace to keep it stable.

The front wheel uses a Husqvarna TE450 hub, liberated of its brake disc mounting tabs. Reier also shaved the brake mounts off the OEM forks, treated the lowers to a blue titanium nitride coating, and fabricated a pair of aluminum fork guards. 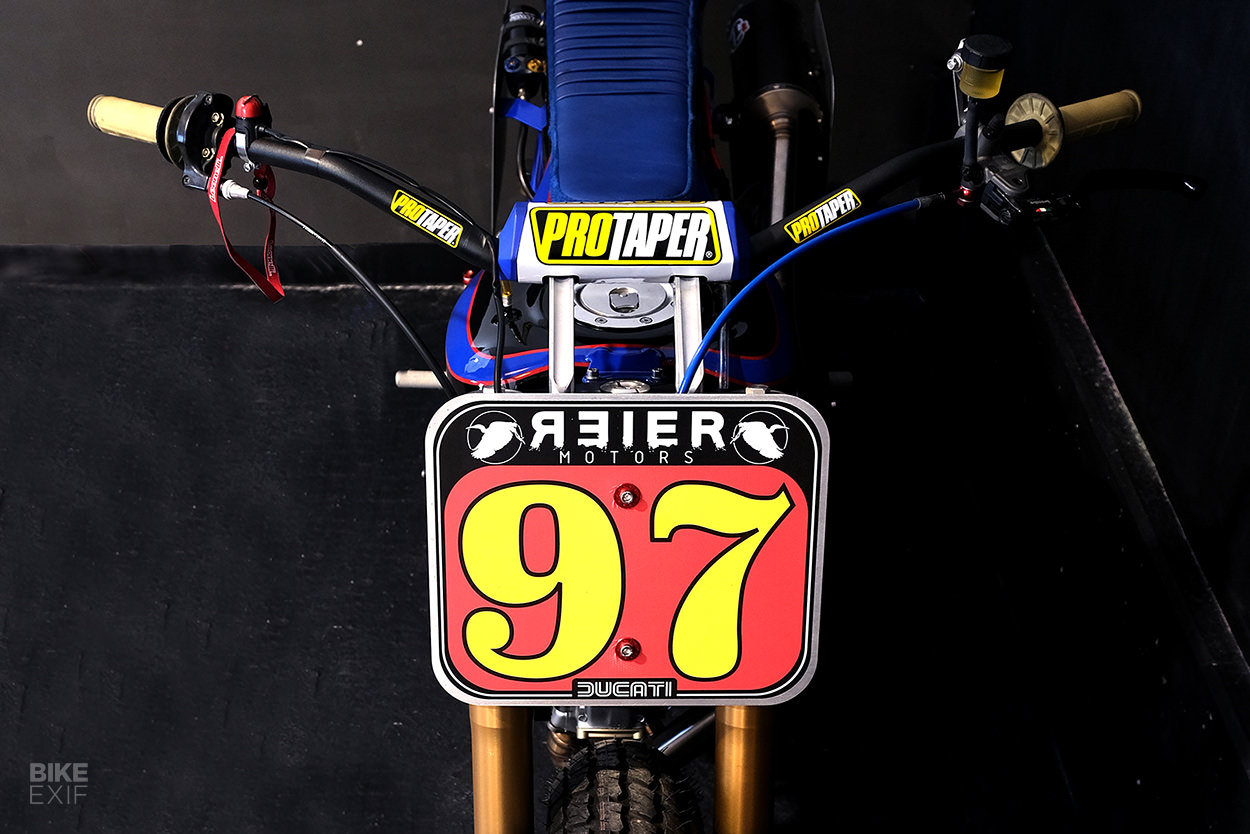 Up top is an all-new cockpit, starting with a new top yoke and back-swept handlebar risers that were milled from aluminum. The bars are ProTaper flat track items, kitted with new grips, a race-spec kill switch and a Brembo hydraulic clutch lever.

“The handlebar mounts are set far back to make the bike more stable on the straights,” explains Christian. “When drifting, the combination of the wide, set-back handlebars makes for a good riding feel.” 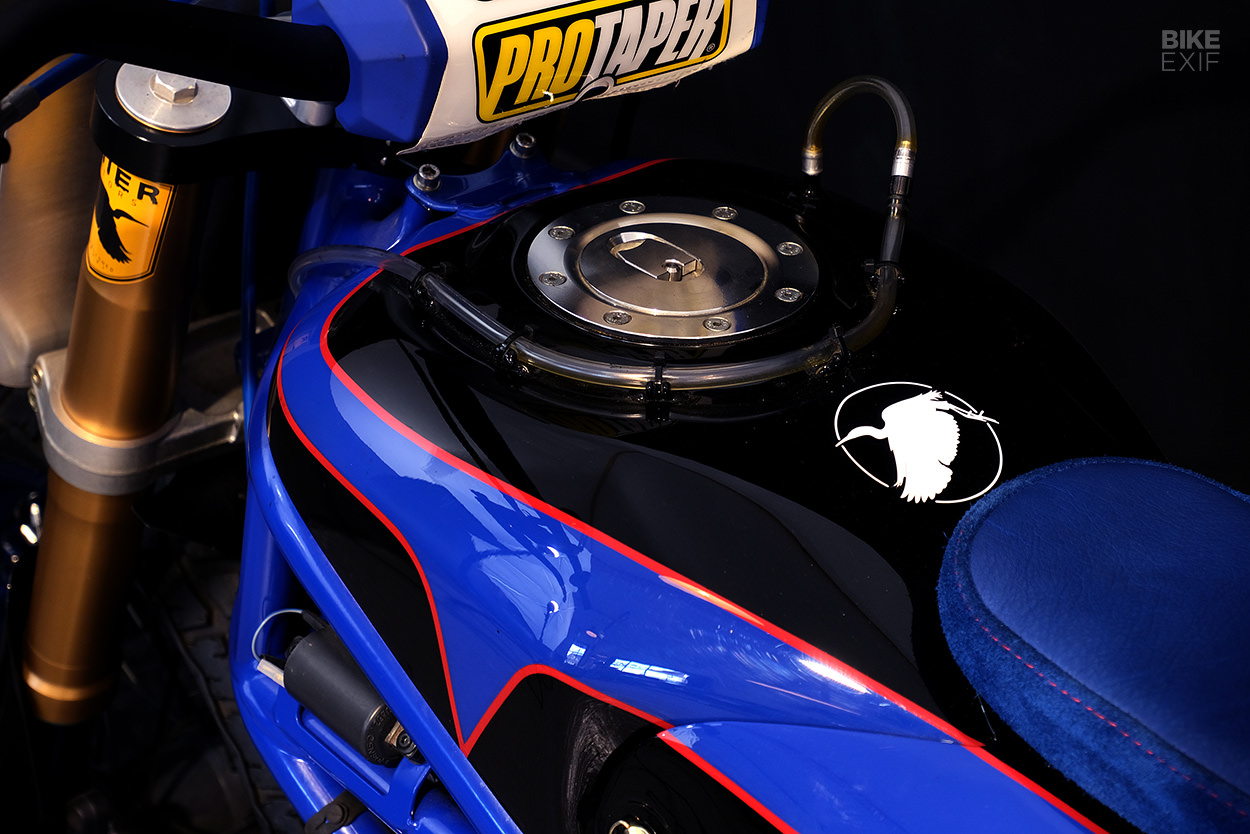 Christian fabricated the Monster’s new bodywork himself; a one-piece aluminum affair that bolts down via a few quarter-turn fasteners. The whole arrangement is flat on top, to maximise rider manoeuvrability.

The tail section was actually modeled on that of the Ducati Panigale, adding a little superbike flair to this dirt tracker. The upholstery was done by a local craftsman, and has extra pleating to stop the rider from sliding backwards under acceleration. 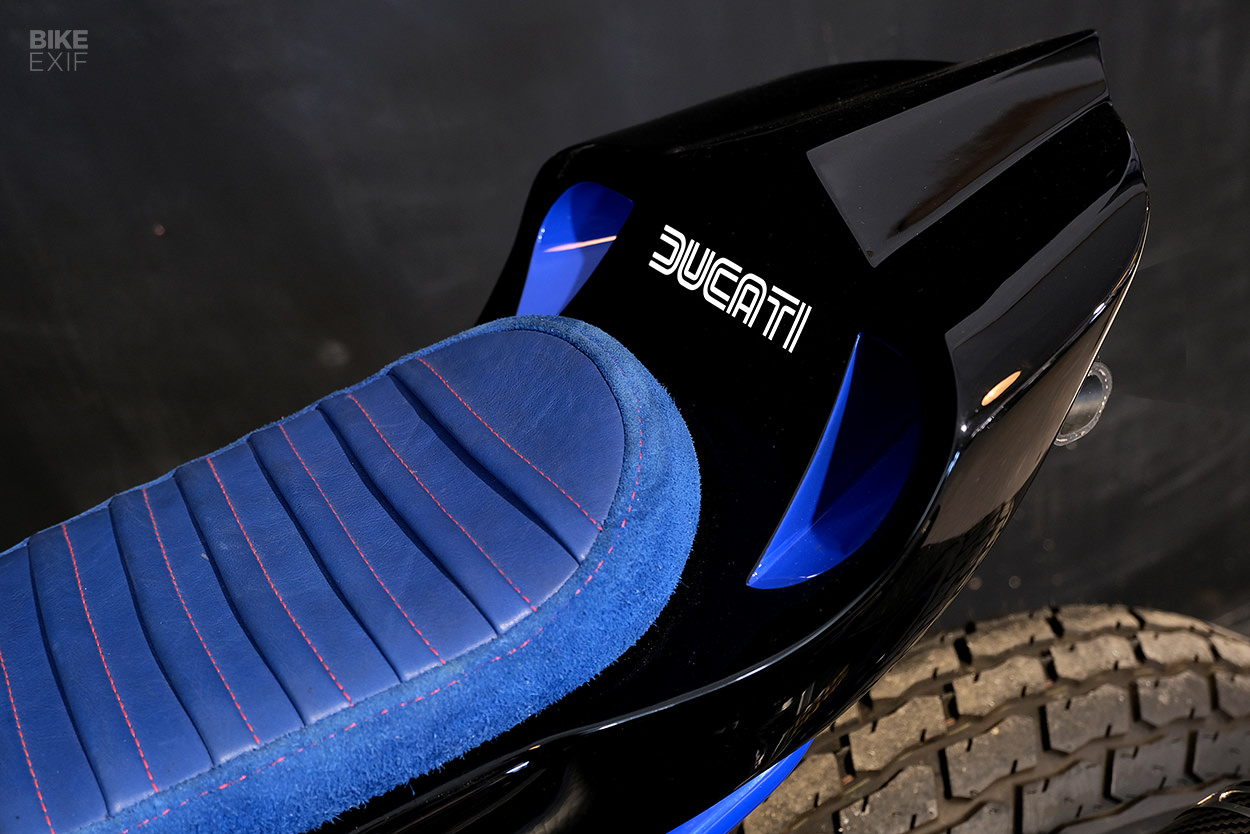 Quite a lot of work went on under the hood too. The Monster underwent a full rewire, and everything that wasn’t needed for flat track racing was tossed. The subframe’s new too, and there’s a hidden battery mount underneath the bodywork.

Christian also fabricated new exhaust headers, which run into a pair of Termignoni mufflers. Getting the whole arrangement to sit on the left side turned out to be tricky, and meant that the left foot peg had to be mounted pretty far out. “Thankfully, this doesn’t matter when riding flat track,” says Christian, “since the left foot is only on the peg in the straights.” 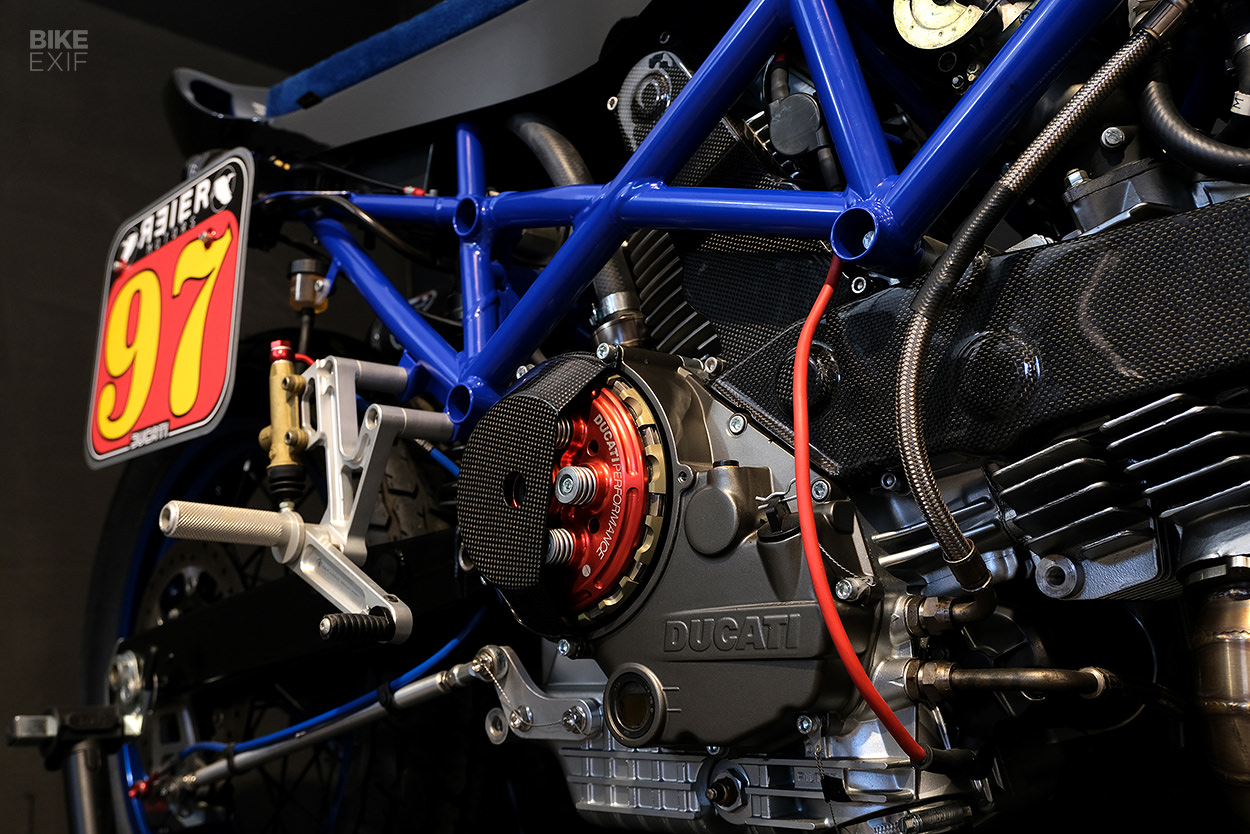 Look closer, and you’ll spot safety wire in all the right places, and protective carbon fiber bits on the engine. There’s also a Ducati Performance open clutch cover—but that’s just for show (the original part goes back on for track days).

For a bike that’s designed to be thrashed, this Monster has a surprisingly level of finish—and some tasty color coding. The livery packs a number of subtle details, complemented by the blue finishes on the frame, wheels and seat. A custom heat shield and number boards, and a handful of red anodized fasteners, add the final touches. 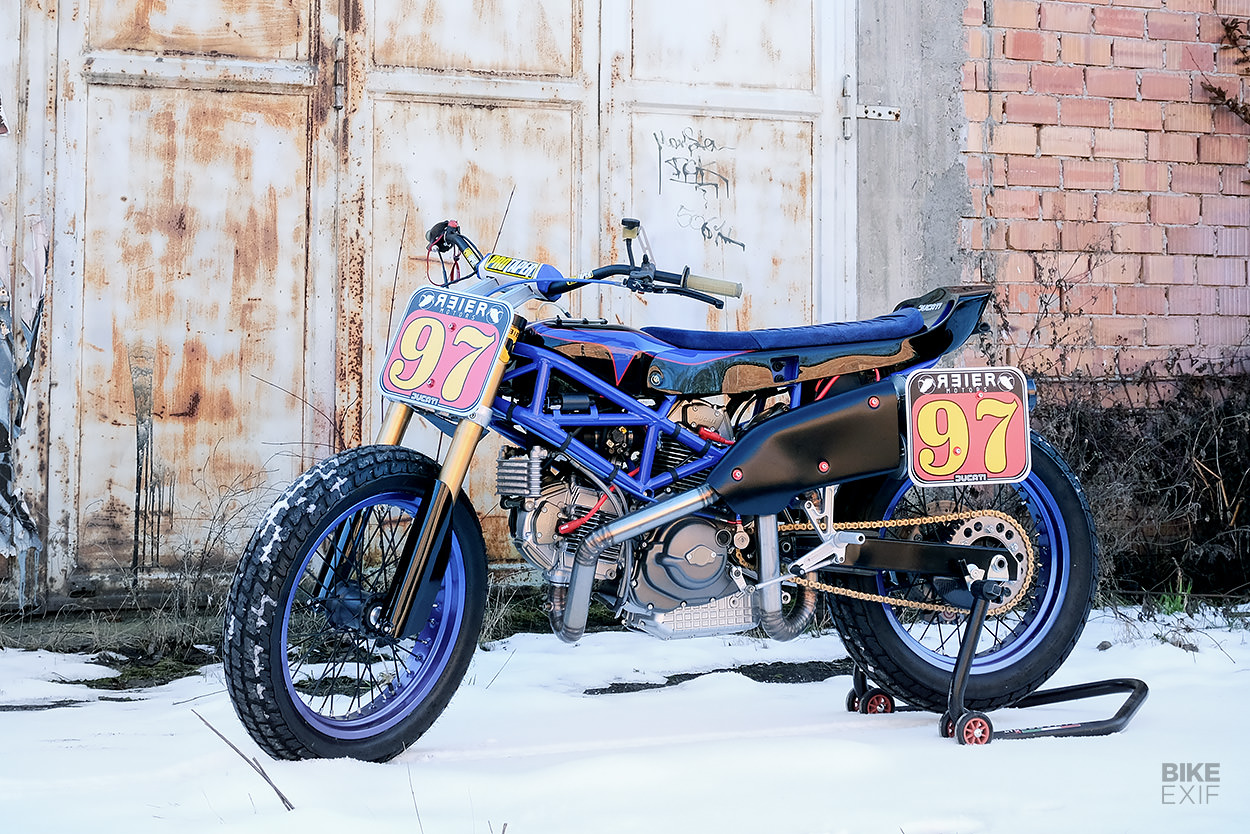 We’re giving Reier Motors ten out of ten for imagination and execution. We just wish we could get out to Austria, so that we could watch (and hear) this radical Monster go fast and turn left. 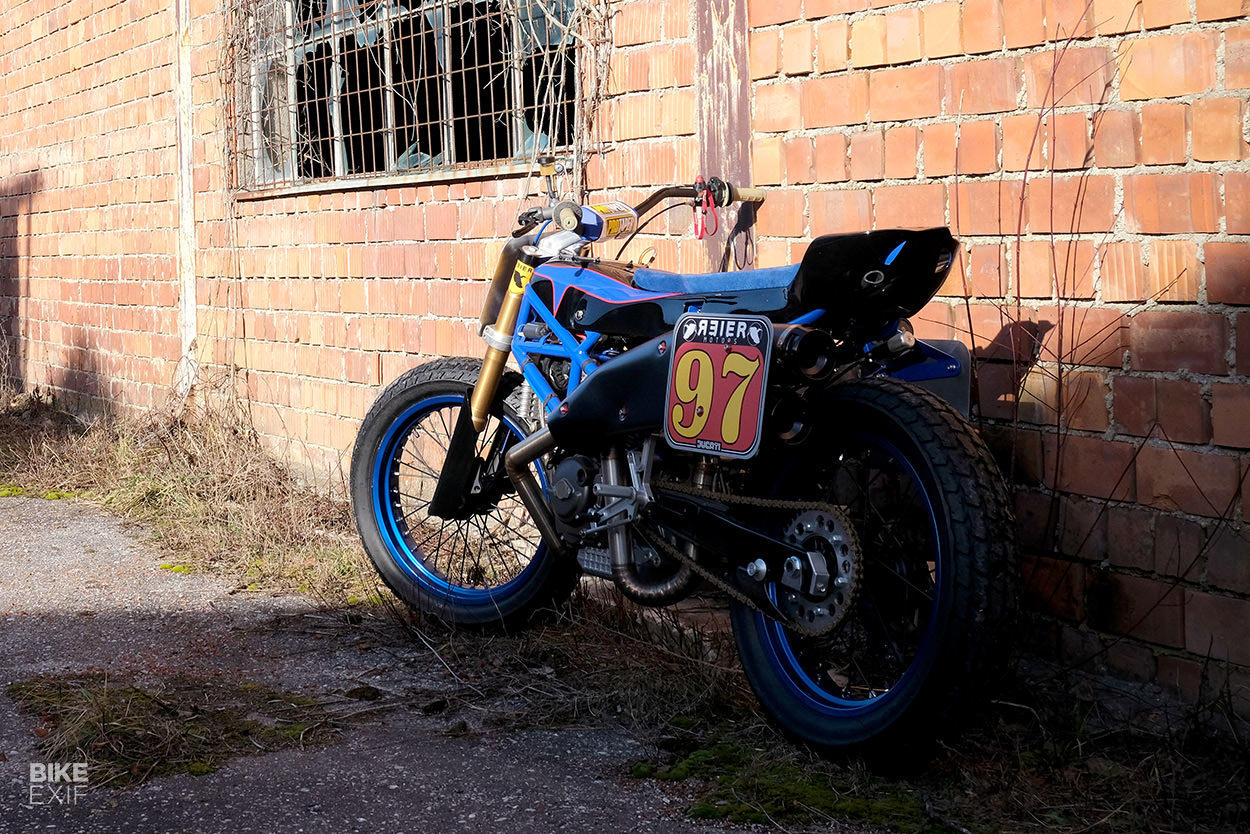