Hot Pursuit: A replica of the Mad Max Kawasaki KZ1000 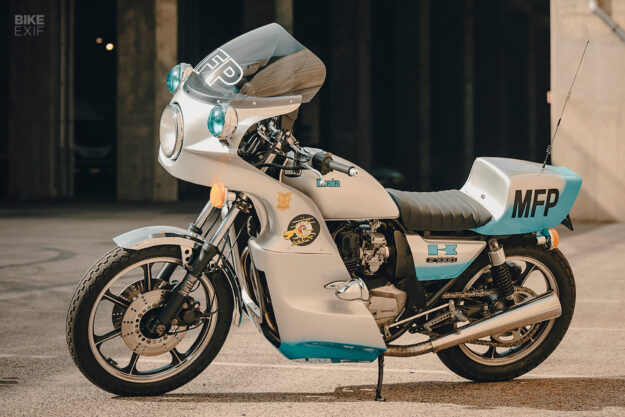 The thought of a Mad Max-inspired motorcycle typically conjures up a very distinct image. But not every vehicle in George Miller’s dystopian film series was a scraggy death trap, covered in scavenged materials and rust. Cast your mind back to the very first Mad Max flick, and MFP officer Jim ‘Goose’ Rains’ 1977 Kawasaki KZ1000 highway patrol bike.

Goose’s bike was originally custom-built by La Parisienne in Melbourne specifically for the movie, with inspiration taken from the Bol D’Or-style endurance racers of the time. Highlights included a high front fairing, a boxy tail section, alloy wheels, and a slick silver and blue paint scheme that was a far cry from the gritty aesthetic of later Mad Max sequels. 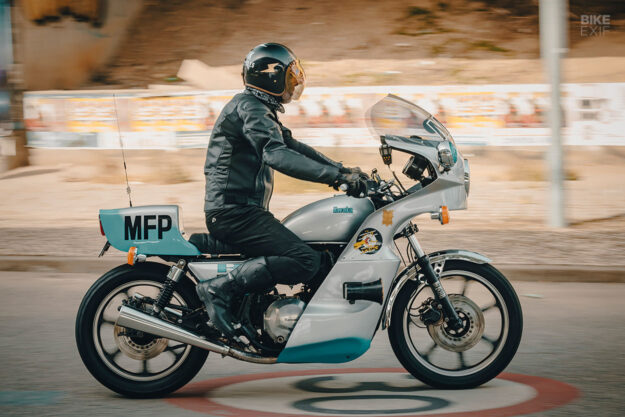 This faithful replica is the work of Tiago Gonçalves and Luis Costa at Unik Edition in Lisbon, Portugal. And the idea to build it actually started as a joke.

“We had a 1981 Kawasaki KZ1000 in the shop,” says Tiago, “and a passing friend asked if we knew that this bike was the same model from the 1979 movie, Mad Max. Of course we knew, and that was one of the reasons why we liked the bike so much. He jokingly suggested that it would be interesting to build a replica of the bike.” 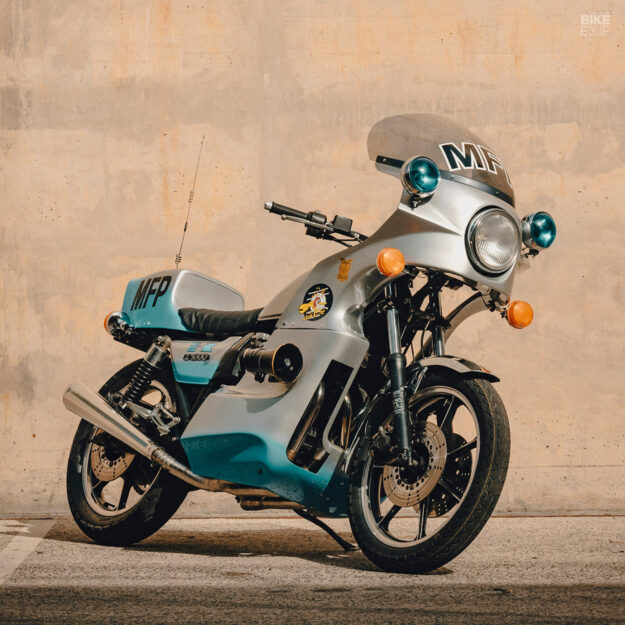 As implied by their name, Unik Edition’s main focus is customization. But they do restoration work too, and don’t mind building the occasional replica. “Obviously we like the whole creative process of building and developing pieces,” says Tiago, “but above all we like challenges and honoring art.”

Two weeks after the idea was sparked, Tiago and Luis dragged the entire team into the workshop and screened the original film to get into the spirit. One year later, Unik’s Goose replica was done. 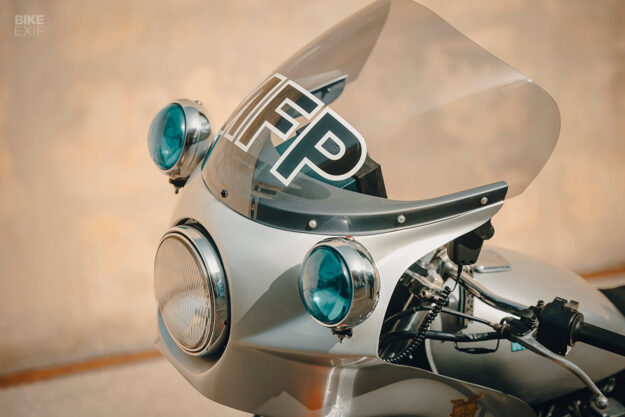 It took them a full year, because building a replica of a bike from a 43-year-old movie isn’t as straightforward as you’d think. Bodywork kits for Goose’s KZ do exist, but the project called for more than just a few bolt-on parts. And Tiago and Luis were adamant about getting every last detail right.

As an added complication, Unik’s donor bike was an 1981 model—not a 1977 like the movie bike. So nothing was going to fit without at least some fettling. 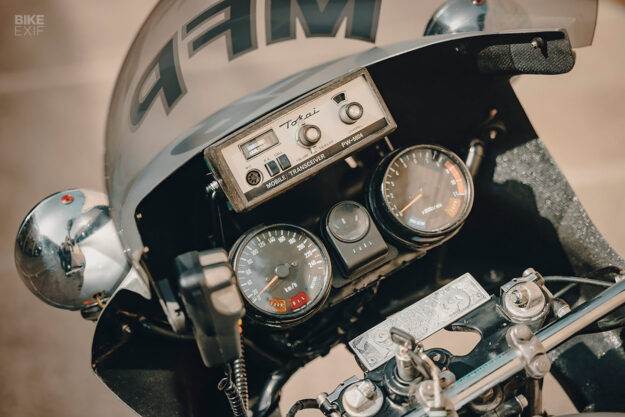 Case in point: the fairing and tail section that Unik managed to import. Both were a dead ringer for the original, but the team had to fabricate new brackets to adapt them to the newer model KZ. As per the reference material, only the bottom of the seat pan is padded, with a storage compartment in the rear hump.

Unik had to swap the side covers out too. So they sourced a pair of fiberglass reproduction items, and modified them to fit the donor bike. 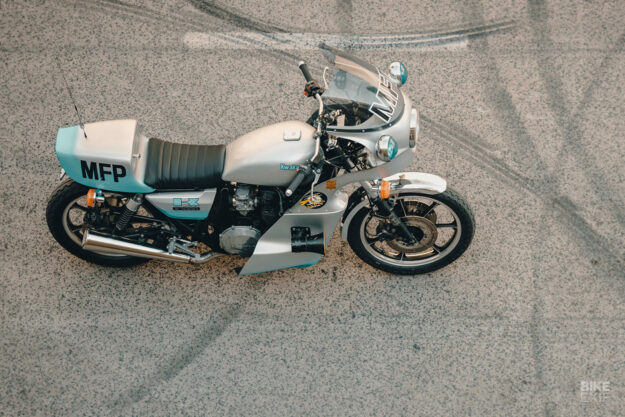 Getting the fuel tank right was another challenge. The crew found a 1979-model tank that fit the bill, but the 1981 frame’s backbone was too wide to accommodate it. So they reshaped its tunnel to get it to fit.

Luckily the alloy wheels that the 1981 KZ1000 came with were an accurate copy of the Lester wheels on the movie bike, so those could stay. But the donor bike’s front fender came painted—not chromed, like in the movie. So Unik stripped the paint off and had it chromed. 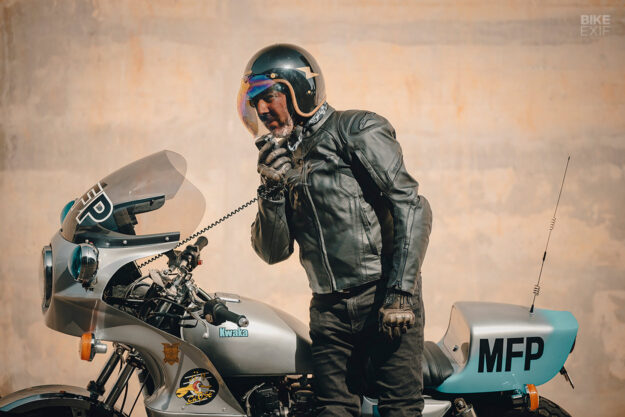 This obsessive approach can be seen throughout the build. Take the turn signals, for example—they’re new items, but they’ve been mounted on custom stems to locate them exactly where they sit on Goose’s bike.

Then there’s the exhaust. Unik built it especially for this bike, taking care to make sure that the four-into-two headers cross over each other exactly like they do on the original bike. 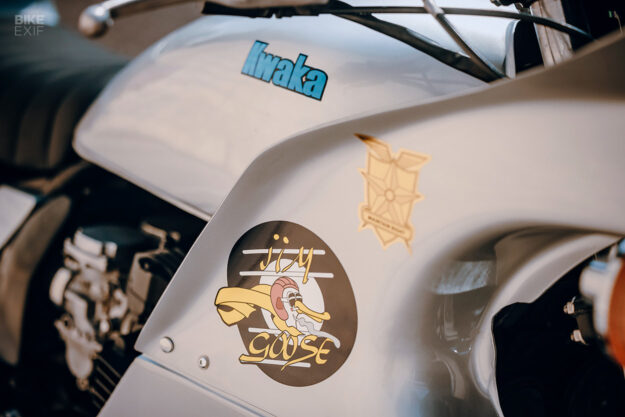 Finishing the build off is a stunning silver and blue paint job, which reportedly took some doing to get just right. The stickers come from a replica sticker kit, while the blue lights and siren are actual ex-police parts.

There is one small detail that doesn’t quite match up, but you’d need to be a fanatic to spot it. 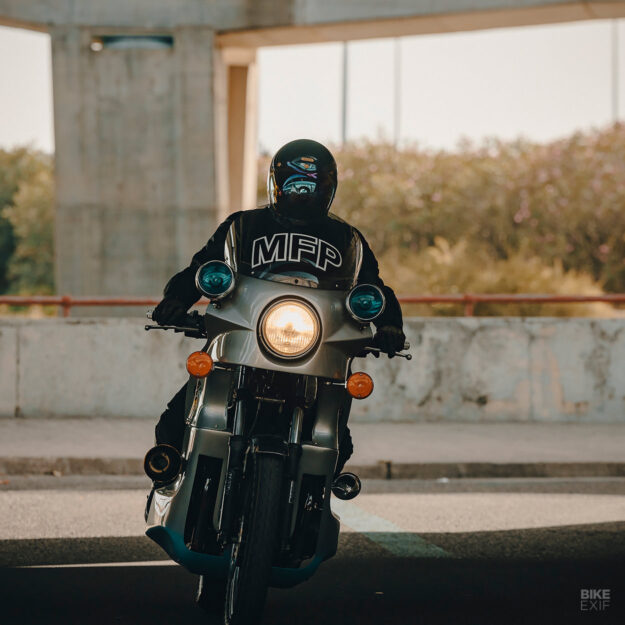 “It was a big discussion,” says Tiago, “but the one thing we changed, was the rear view mirror! Because the movie is Australian, and they drive on the opposite side of the road from Europe, the mirror was originally on the right. For obvious reasons, we changed it to the left side.” 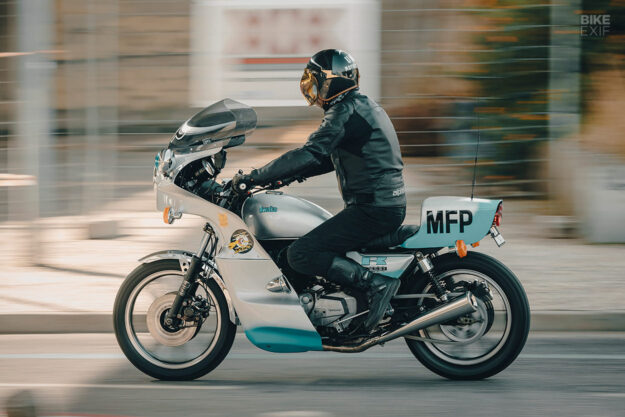