How to build an Indian Challenger race bagger, with RSD 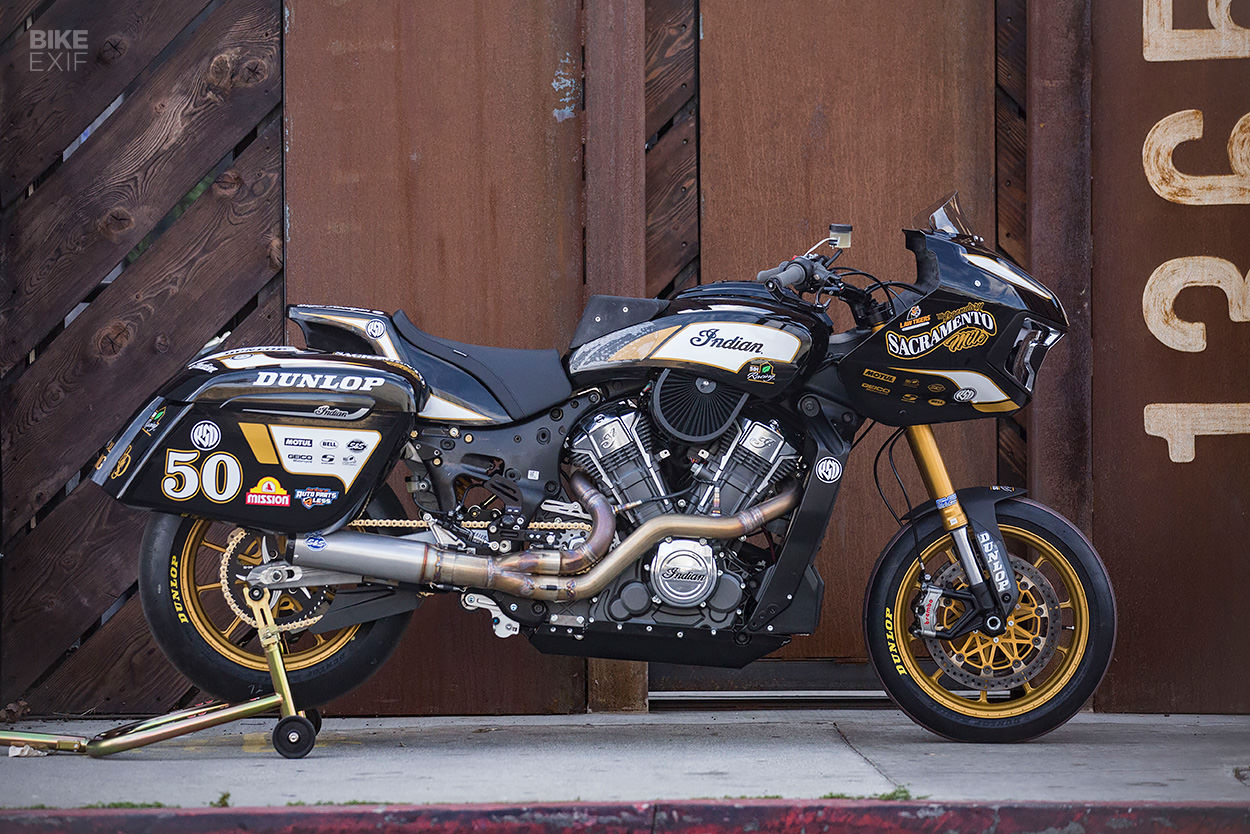 Unless your internet’s been down for the past year, you probably know about the phenomenon that is bagger racing. MotoAmerica’s King of the Baggers is a six-race series for big race-prepped American V-twins, complete with fairings and panniers. It sounds ridiculous, but it’s produced some gnarly racing—and some pretty wild machines. 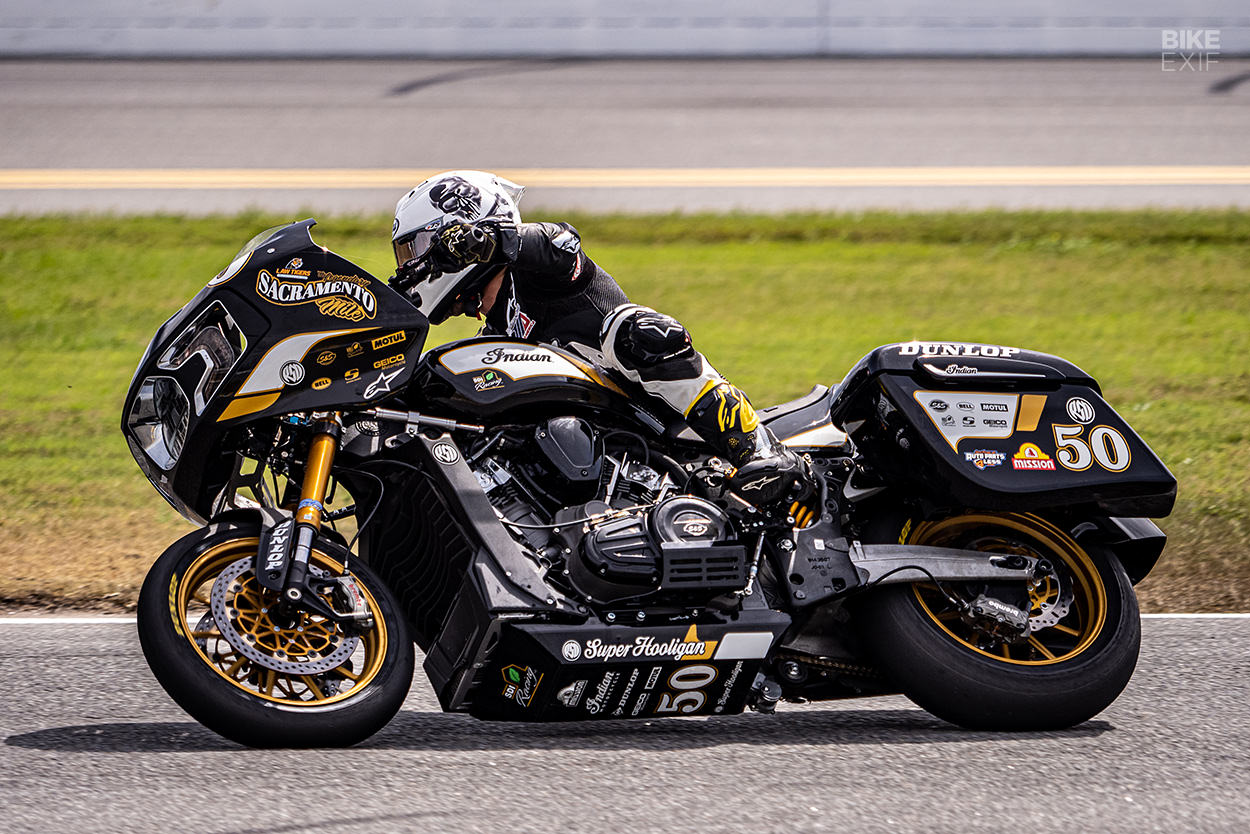 In stock trim, the Indian Challenger’s 108 ci power plant makes 122 hp and 175 Nm of torque… but this bike is far from stock. It’s running a 112 ci engine with a host of go-fast goodies, including a Maxx ECU that’s been used to race-tune the bike. RSD are hush on the numbers, but we’re guessing they’re sizable.

The engine breathes in via a custom intake, and out via a one-off two-into-one exhaust system that’s been designed for maximum cornering clearance. Both are from S&S Cycle, along with the wiring harness and primary cover. The spec sheet lists K&N air and oil filters, an Endurance Adler slipper clutch and a Translogic quick-shifter. 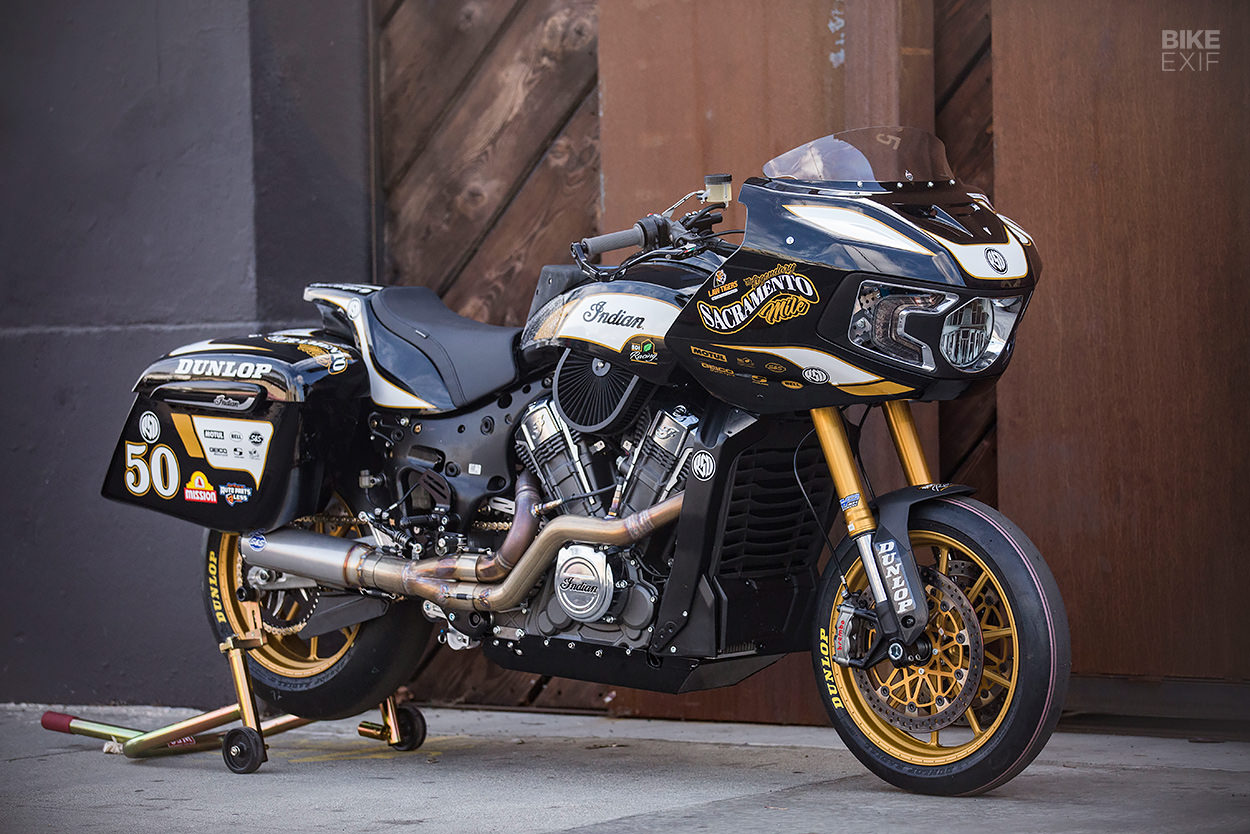 If you’ve ever ridden a bagger in anger, you’ll know that they’re weirdly fun in corners—until things start scraping. So a lot of work’s gone into improving not only the Challenger’s road-holding abilities, but its ride height and cornering clearance too.

That includes clever mods like machining down the front sections of the Indian’s aluminum frame, and installing raised S&S rear-sets. There’s also a smaller Lithium-ion battery, mounted in an S&S battery box that sits higher and tighter. 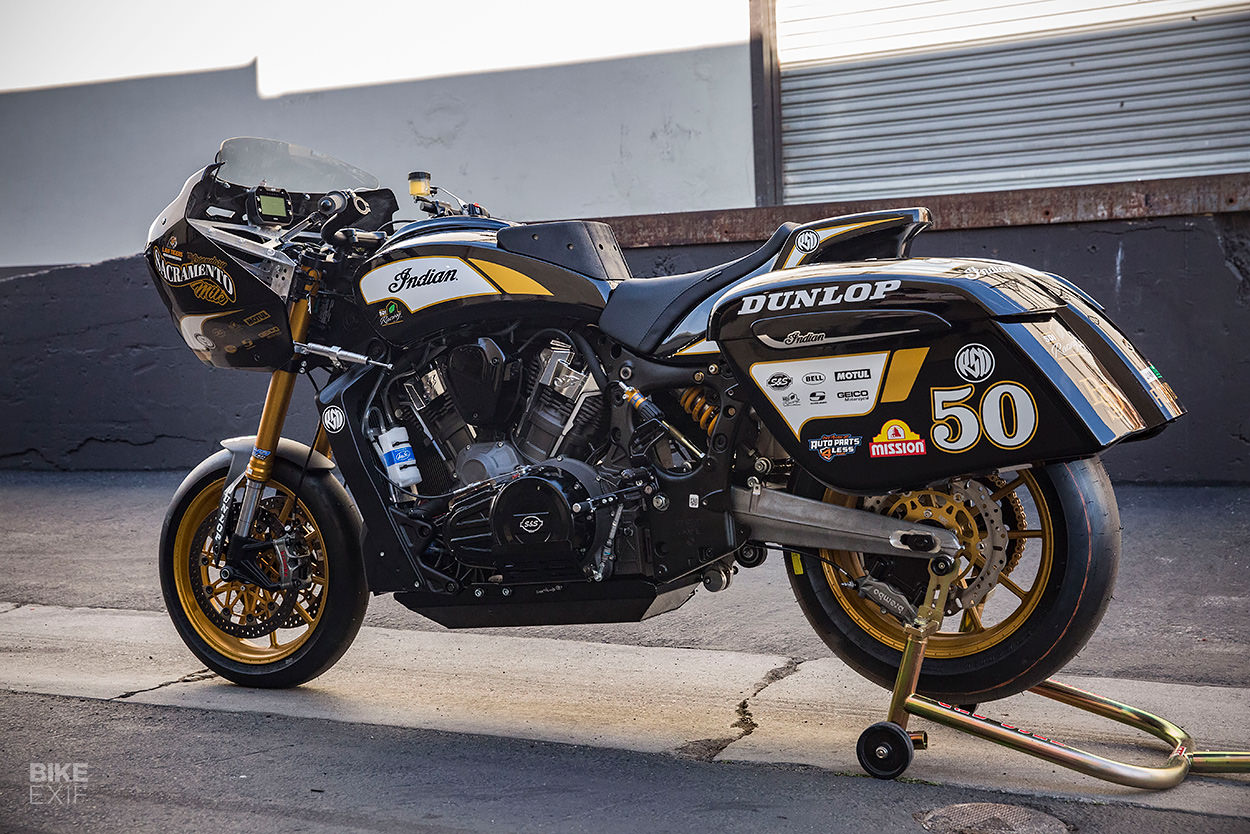 As you’d expect, the suspension is all-new. Up front are the Sachs forks from an Indian FTR1200, kitted with a GP Suspension cartridge kit. They’re gripped by a set of S&S triple clamps that have an adjustable offset.

There’s an Öhlins TTX race shock out back, connected to an RSD adjustable ride height linkage rod. Surprisingly, the swingarm is stock—if you don’t count the race stand mounts that have been welded on. 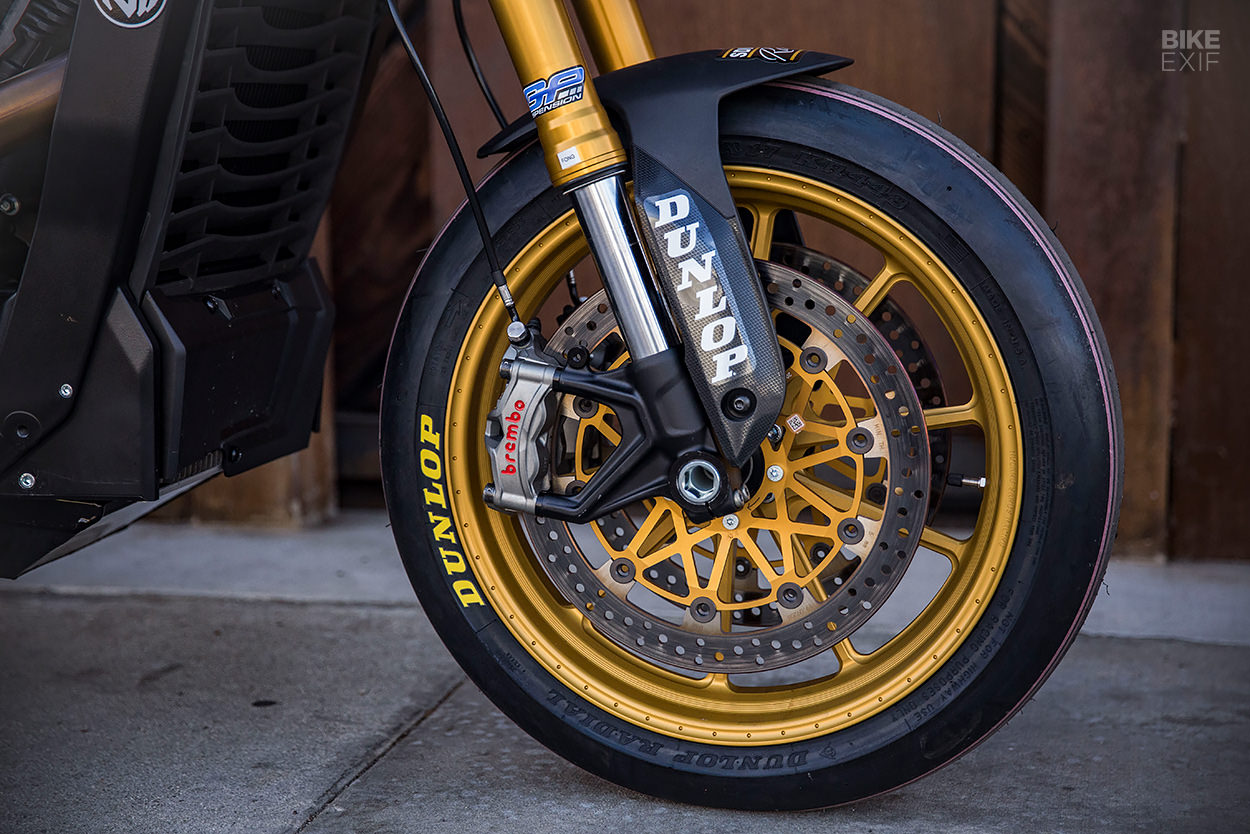 The 17” race wheels are aluminum RSD parts, based on a design that the shop originally used on their Victory-powered Pikes Peak race bike seven years ago. They’re wrapped in Dunlop tires; a KR448 slick (front) and a KR451 (rear).

For the brakes, RSD threw a mixed bag of Brembo parts at the #40 bagger, hooking everything up with Spiegler hoses. The front setup uses Brembo’s M4 Monobloc calipers, the floating discs from a Ducati Panigale and a 19RCS Corsa Corta master cylinder. The rear uses a P34 caliper on an S&S Cycle mount, a Serie Oro floating disc, a Beringer master cylinder and a Racetorx thumb brake. 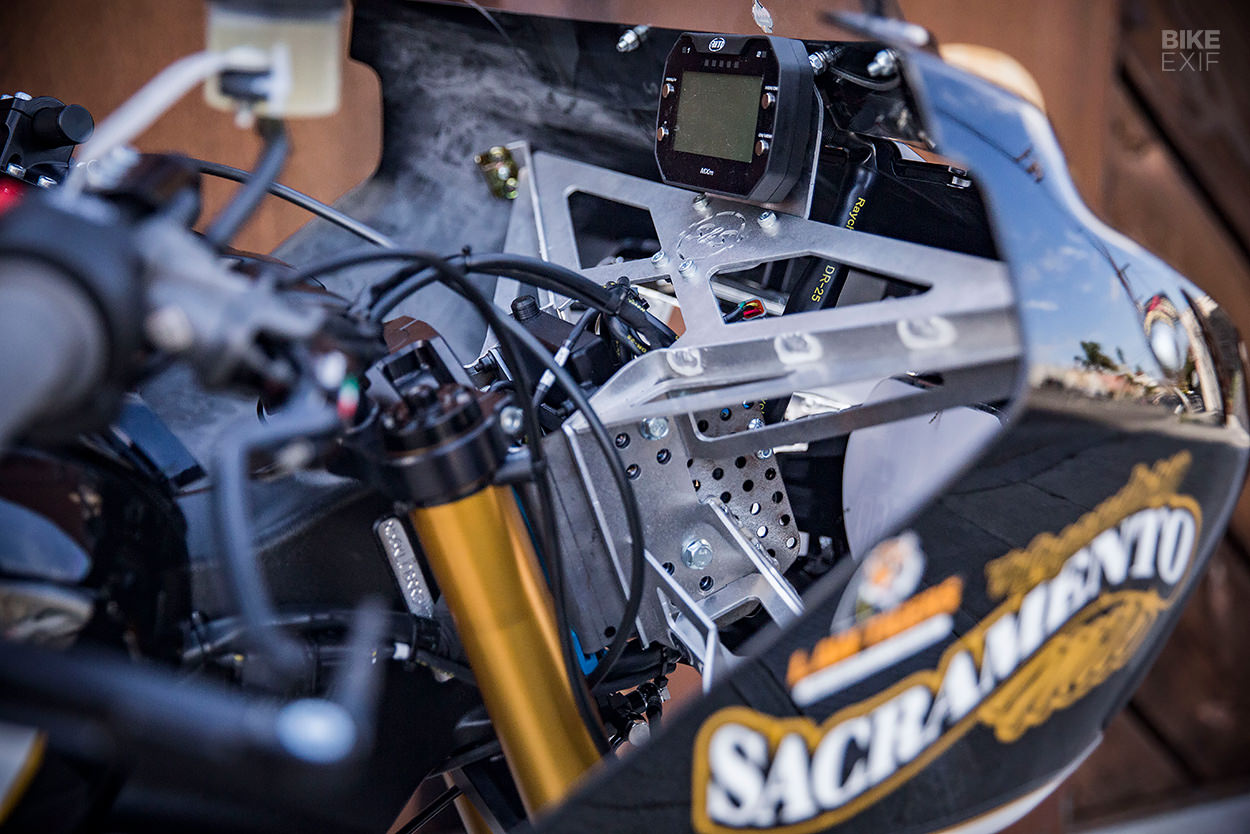 Bagger race rules state that bikes need fairings and cases—but they don’t need to be factory fitted. RSD kept the Challenger’s fairing though, but remounted it on improved stays from S&S Cycle. It wears a Klock Werks windscreen, and faux headlight decals.

Mounted behind the fairing is an Aim MXm dash, complete with data logging software. S&S bars and risers get the controls to where they need to be, and are fitted with Renthal grips and Driven Racing lever guards. 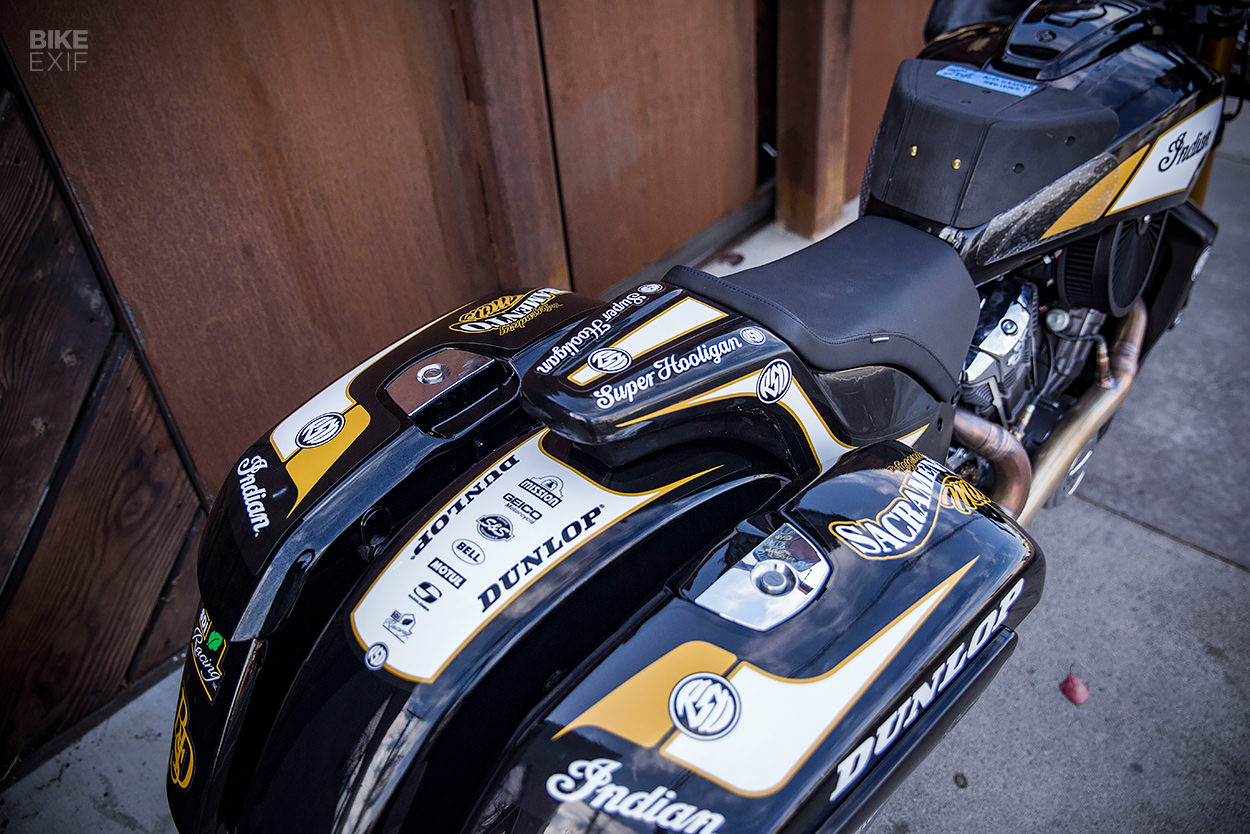 Further back is a complete Saddlemen seat and tail unit, floating over a fiberglass rear fender from Airtech Streamlining. Airtech supplied the fiberglass panniers too; they’re considerably svelter than the factory cases. The front fender’s from an FTR1200, and the engine sliders and aluminum belly pan are from S&S. 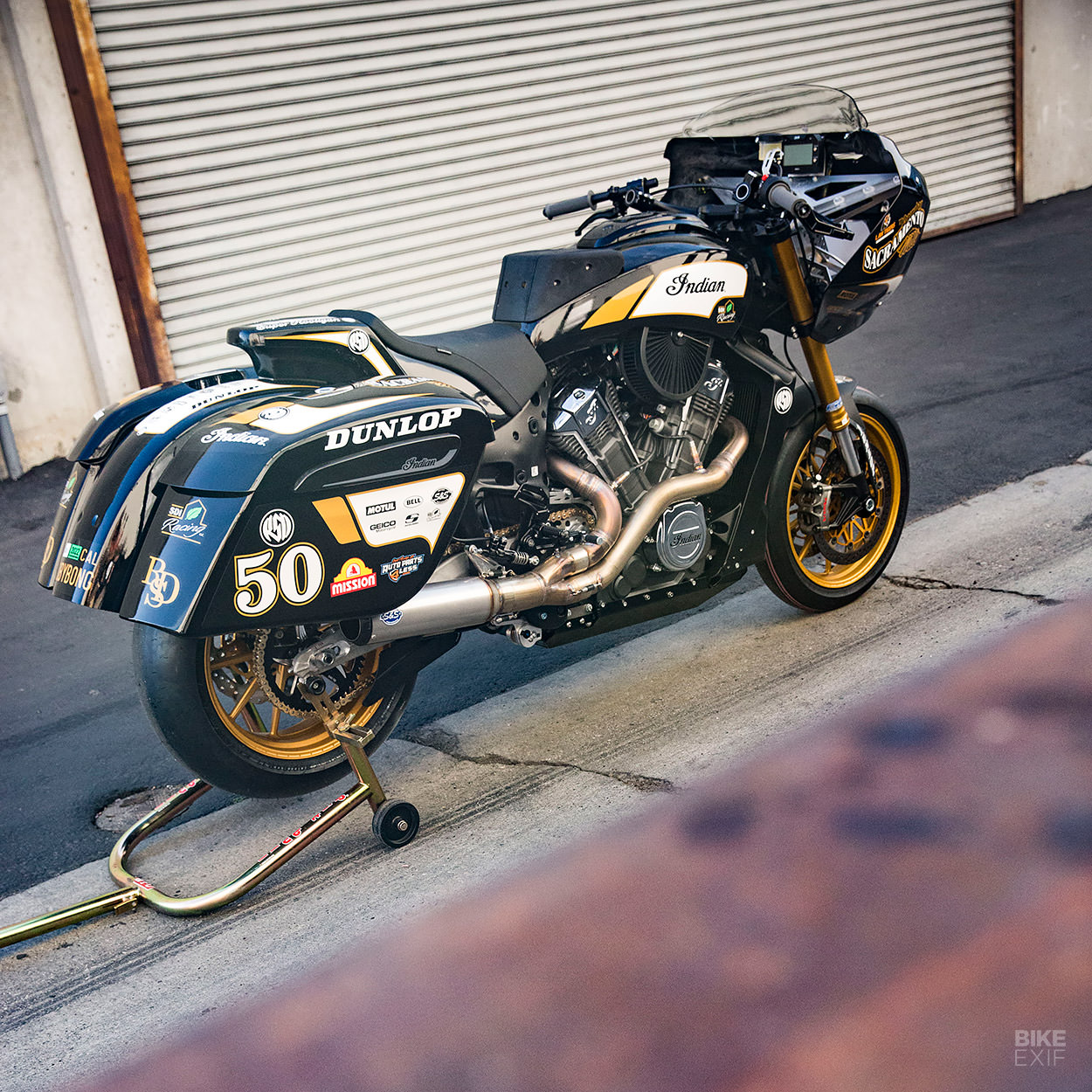 There are probably a host of other mods that RSD aren’t telling us about, but one thing’s certain: whether you like baggers or not, this race bike is completely bonkers. We’re loving the black and gold livery too—and the John Player-inspired RSD logos.

It’s also considerably lighter than it used to be. A stock Indian Challenger clocks in at 796 lbs dry, but this one weighs just 621 lbs—a pound above the King of the Baggers’ minimum weight limit. 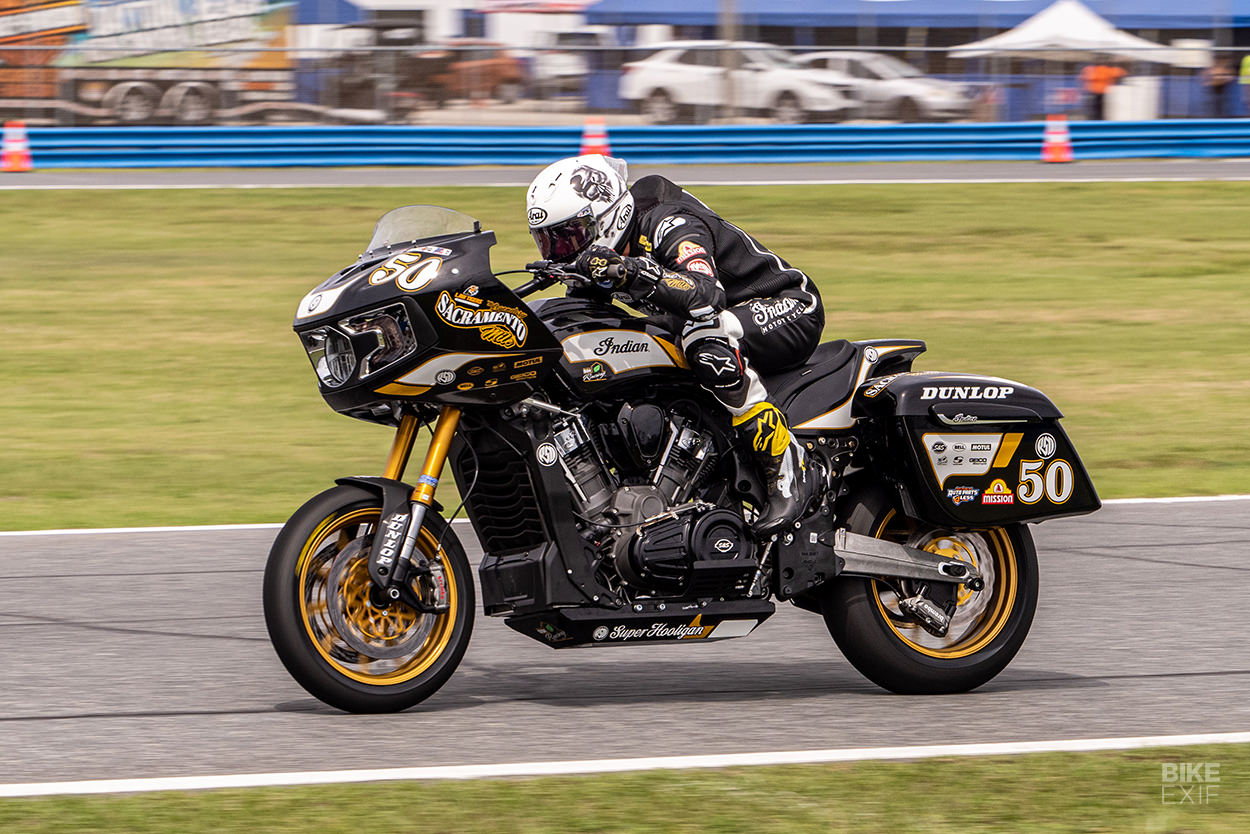 If you’re wondering how Bobby and his #50 Challenger have fared so far, he’s currently sitting fourth in the championship after two rounds with a podium finish to his name. Not bad for a flat track guy that had never raced a bagger before this season.

And if you still don’t know what bagger racing is, hit ‘play’ on the highlight reels below and thank us later. 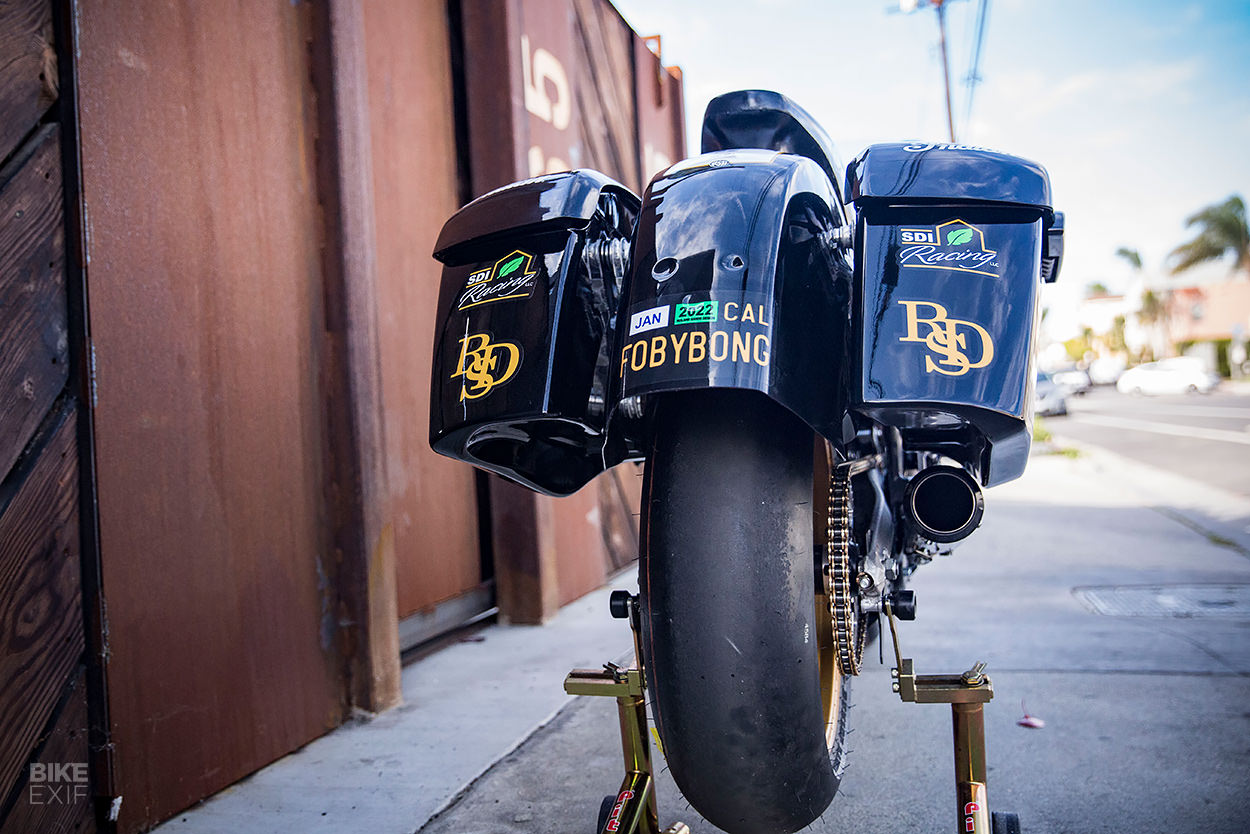