Simply dubbed ‘GrassTracker No0006,’ the bike was commissioned by a client, and follows a template that Kimura-san has developed over the last few years. It’s based on the humble 2000-model Suzuki TU250 Grasstracker Big Boy—a 250 cc single-cylinder commuter with classic charm.

Kengo typically picks either the TU250, or its variant, the ST250, for these scrambler projects, because they tick a lot of boxes. They’re uncomplicated machines with minimal bodywork, decent ground clearance and 19F/18R wheels that are perfectly suited for dual-purpose use. And since they only make 20 hp and weigh 273 lbs dry, brake and suspension upgrades are less of a priority.

That’s why this Grasstracker’s running gear has mostly been left alone, save for a fresh set of Dunlop D603 tires. Kengo’s focus here was on trimming the petite single down even more, refining its looks, and making it more fun to ride. 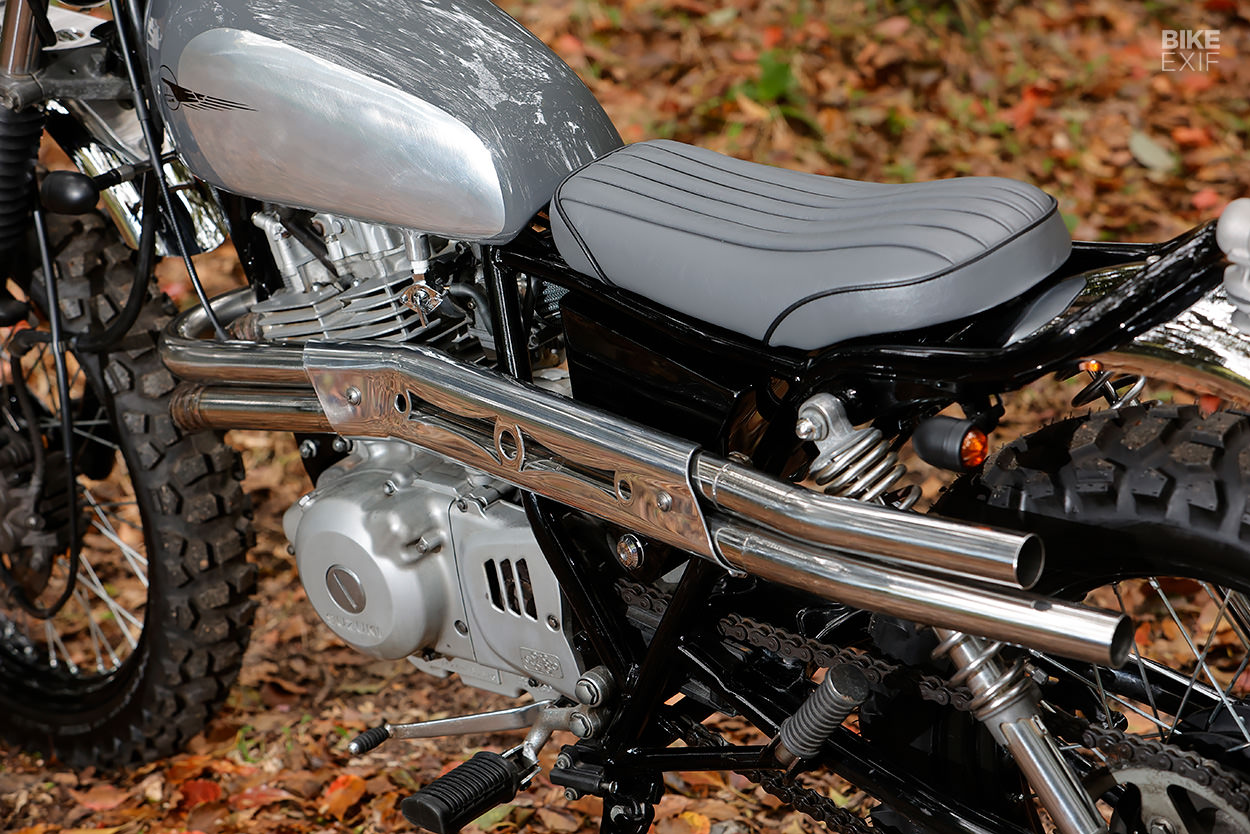 Kengo started by ditching the Suzuki’s stock trimmings, replacing them with a clever mix of modified and one-off parts. The aluminum fuel tank’s actually from a vintage motorcrosser; more specifically, a 1977 Suzuki RM250. Kengo modified it to fit the Grasstracker’s frame, and welded in a new bung for the petcock.

Behind the tank is a slim solo seat, covered in a tough grey vinyl. Kengo modified the subframe underneath it—cutting and looping it as short as possible without hacking into the stock shock mount gussets. 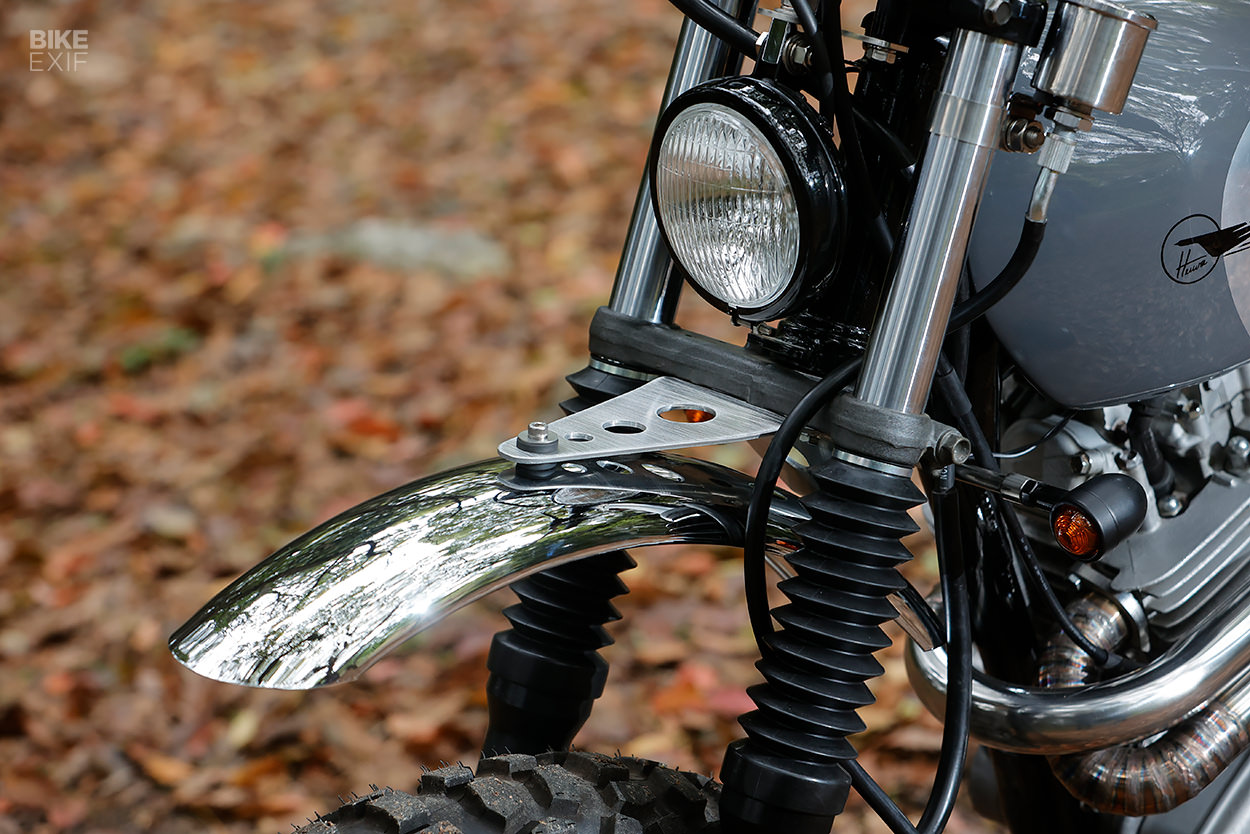 High-mounted custom fenders at both ends complement the Grasstracker’s classic scrambler silhouette. The front fender’s held in place by a tasteful hand-made bracket, and the rear is dressed with a Heiwa taillight and a tidy license plate bracket.

Kengo modified a vintage fog light to act as a headlight, then installed small bullet-style turn signals at both ends. 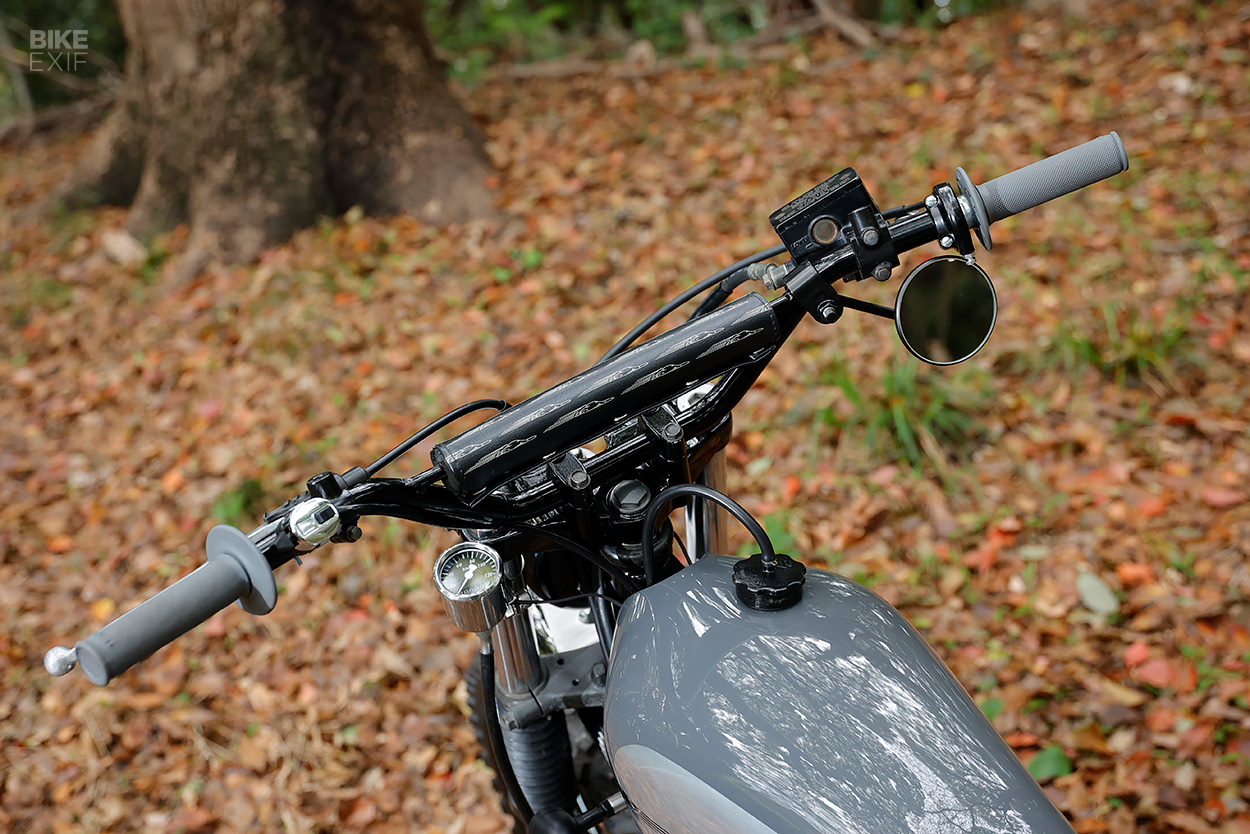 Up top are a set of off-road handlebars, complete with a bar pad adorned with Heiwa’s branding. The control area is sparse, featuring Renthal grips, mini vintage-style switches and a single mirror. A tiny off-the-shelf speedo, mounted to the left of the top yoke, keeps things street legal.

Kengo tweaked the wiring too, and relocated the ignition to a custom side panel on the left of the bike. Behind it, the airbox has been ditched in favor of a pod filter.

Take a peek at the other side, and you’ll notice a small hand-made fuel cell that would easily be mistaken for an oil tank on an older bike. It carries less than a gallon of fuel, which, as Kengo puts it, is enough for “emergencies when entering the mountains.”

It’s not plumbed into the main tank though. Instead, it pops off via two bolts under the seat, acting as a jerry can of sorts. And since the filler cap is decently sized, easily accessible and set at an angle, it’s possible to top it up while it’s still attached to the bike. 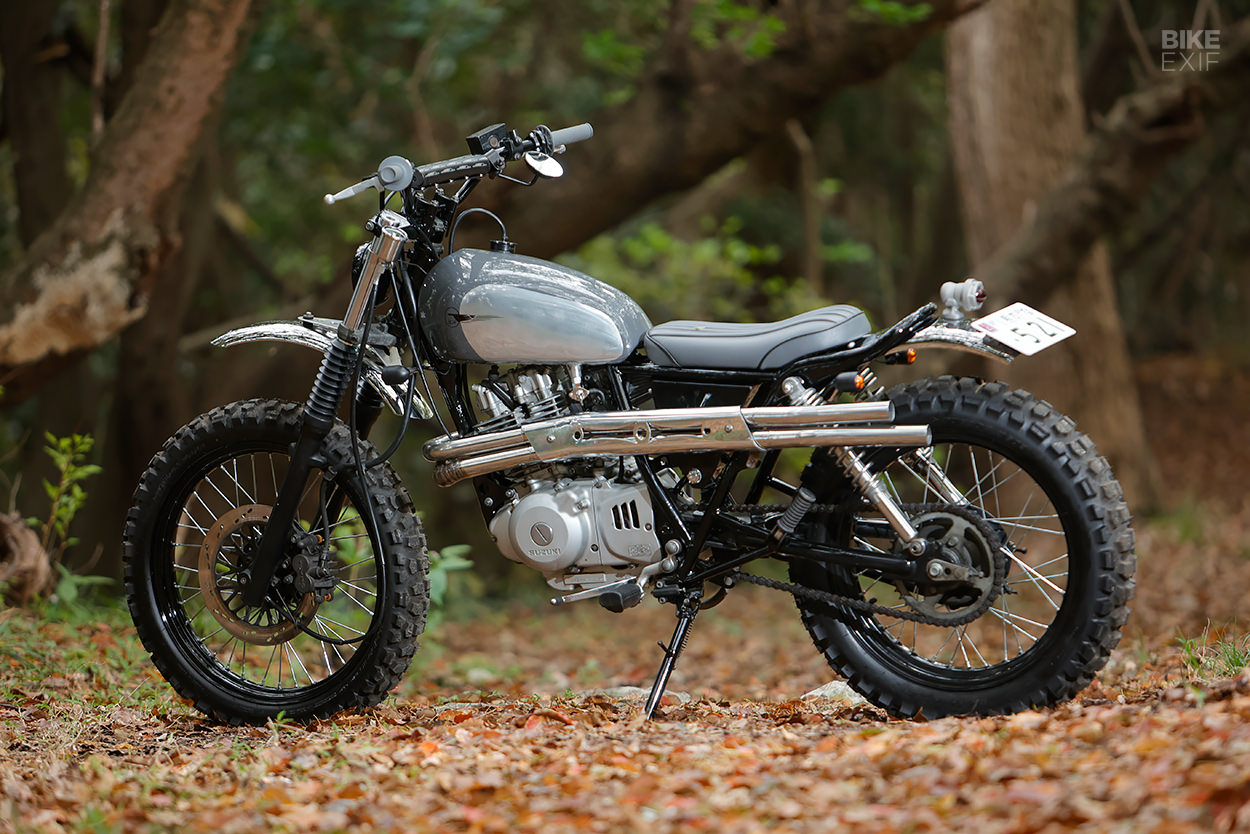 Ultimately there’s nothing wild going on here—just a well-judged set of mods that add up to a cute commuter that can cut loose on weekends. We’re loving the monochrome livery too, executed by frequent Heiwa collaborator, Ninben.

But our favorite mod is undoubtedly the stainless steel exhaust system. Kengo opted for a pair of high-mounted shotgun pipes on this build, protecting the rider’s leg with an elegant custom-made heat shield. It looks perfect, and probably sounds killer too. 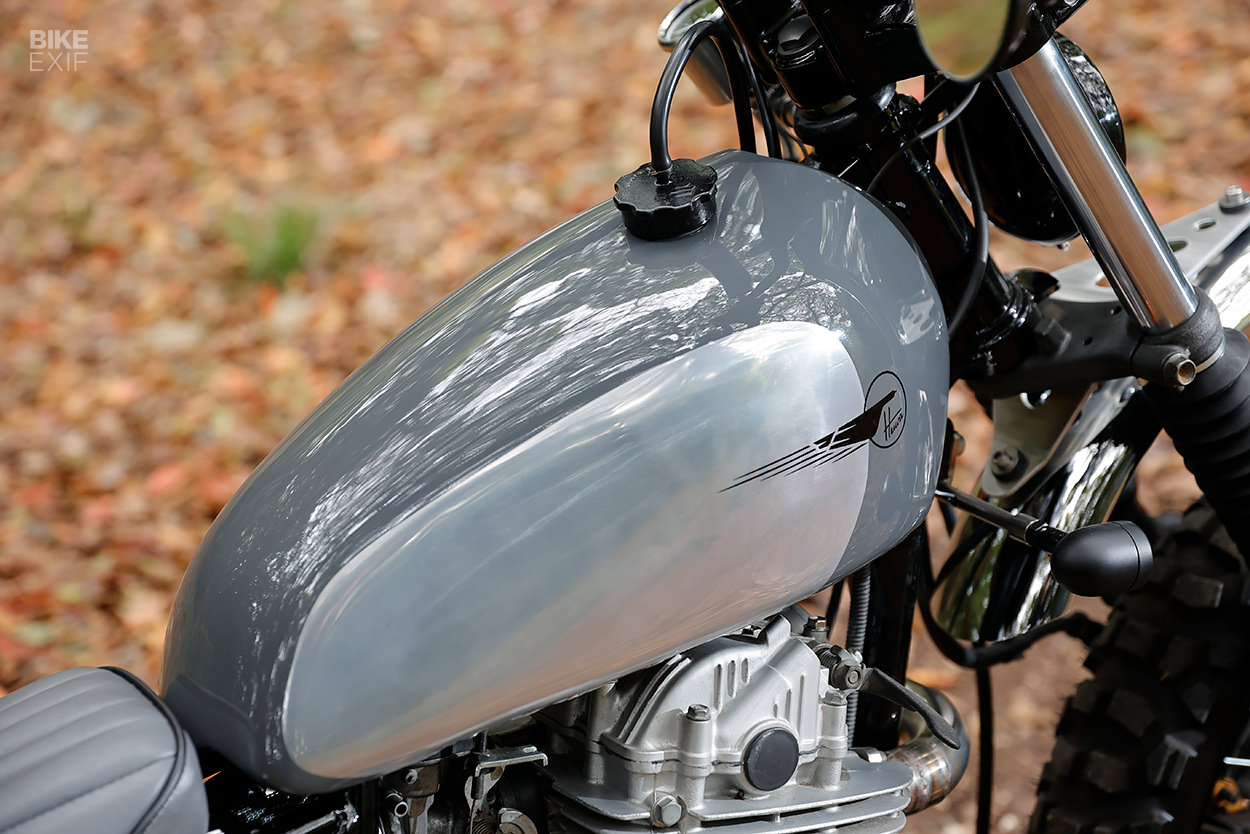 We’re regularly reminded of how much fun small bikes can be—but we seldom expect those reminders to come from award-winning custom motorcycle builders. Here’s hoping that Kengo finds enough time between his bigger projects to keep producing sassy little rippers like this. 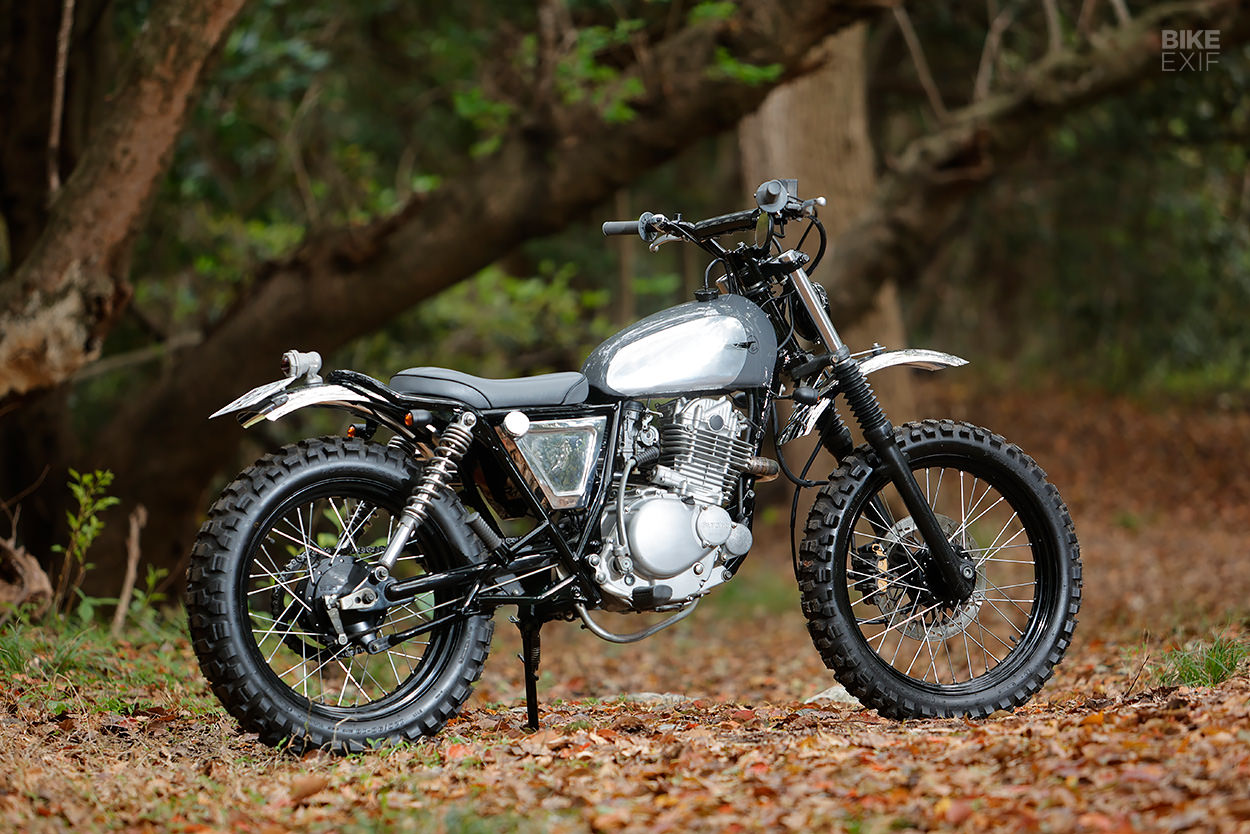