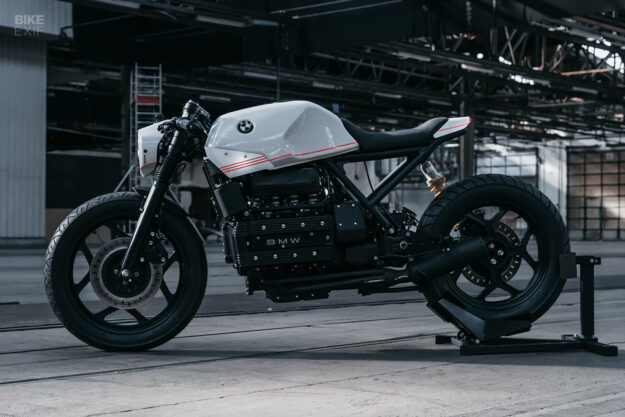 From the minute it hit the custom scene, the BMW K100 has been an underdog. With a brick-like motor, overly angled bodywork and a kinked subframe, it’s a far less appealing option than the more handsome R-series boxer. But that hasn’t stopped it from becoming a surprisingly popular choice.

The key lies in how you customize the K100. If your strategy is to shoehorn it into a traditional build style, you’re destined for heartbreak. But if you find a way to harness the K100’s quirkiness rather than fight it, the results can be pretty damn spectacular. 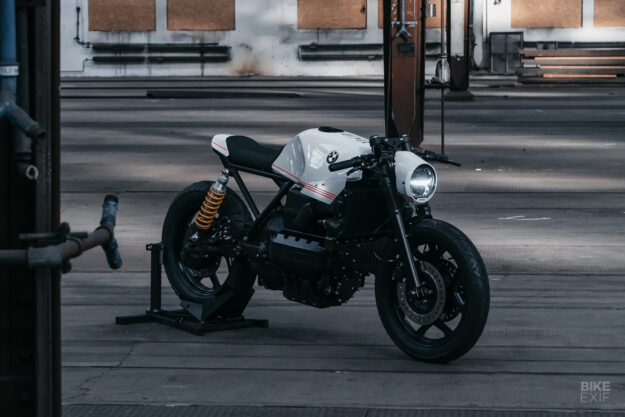 That’s the approach that Motoism and Impuls have taken with this ultra-sharp 1983-model BMW K100 café racer. The two Munich-based outfits share a love for good design, and are well-versed in modern manufacturing techniques. With support from VOR Shoes, Kruno Trim Studio, Öhlins, ABM and Pirelli, they set out to reinterpret classic café racer concepts in a retro-futuristic style.

“This sporty fresh K100 pays tribute to the 80s to the furthest extreme,” says Motoism founder, Ben Ott. “A throwback that combines iconic features with futuristic artifacts. Illuminated wings, a pair of custom sneakers and rear light flares get you ready to put neon into overdrive.” 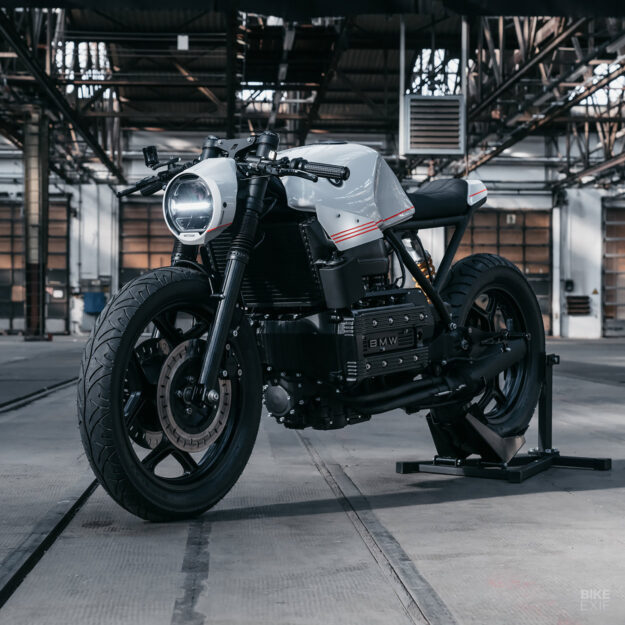 The idea was to build the bike in such a way that the parts could be replicated, to be sold as either individual pieces or a kit. So Motoism and Impuls leaned heavily into 3D scanning, design and printing technologies to pull this off.

First, the bike was stripped down to its bones and 3D-scanned. Then the team redesigned the entire bike digitally, from the headlight shroud and ‘aero wings,’ all the way through to the refined tail section. From there, a multitude of parts were 3D-printed, using a high performance copolymer and a carbon-reinforced copolymer. 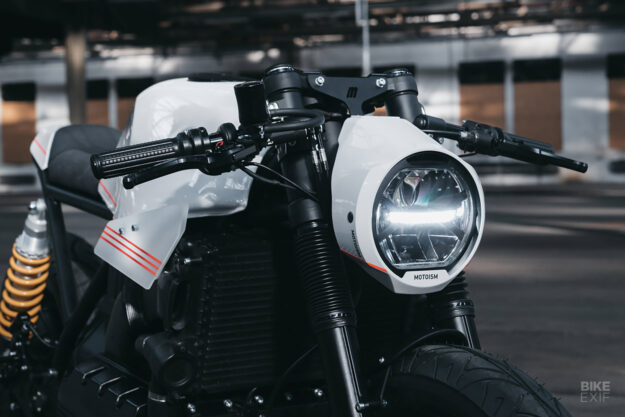 Starting at the front, Motoism mounted up a new headlight nacelle by way of laser-cut stainless steel brackets. It houses a Koso Thunderbolt LED headlight, with a small Motogadget digital speedo neatly embedded up top. It also holds a slim row of LED warning lights, and a hidden RFID-equipped keyless ignition point. 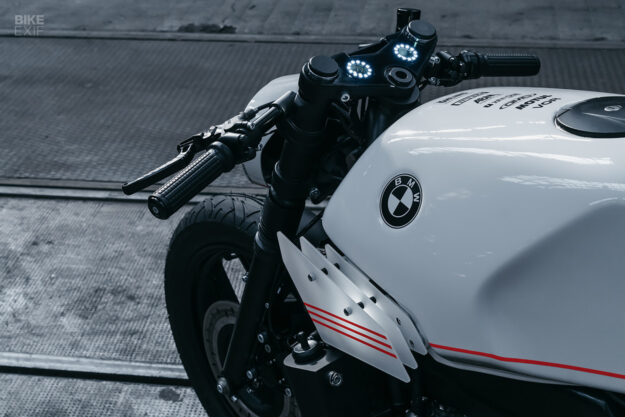 Flanking the stock fuel tank are a set of translucent ‘wings,’ bolted to stainless steel mounts. They obviously do little for the bike’s aerodynamics, but they do serve a purpose—other than complementing the tank’s lines perfectly. Equipped with LEDs, they effectively operate as daytime running lights for added visibility out on the road. 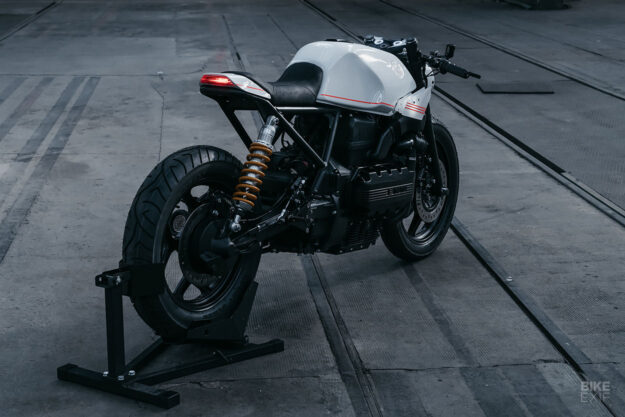 The forks themselves were lowered a touch, and kitted with new spacers and springs. A custom-built shock from Öhlins props up the rear end, bolted to a custom-built subframe. Motoism and Impuls worked on the frame together, welding together CNC-bent tubes to get the shape right.

It’s topped off with a custom solo seat, followed by a 3D-printed hump. The taillight is a completely bespoke, with translucent plastic fins illuminated by LEDs. 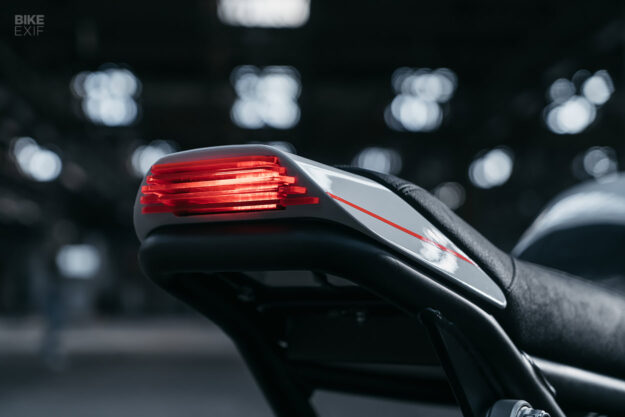 The rest of the build sports a smorgasbord of custom and add-on parts. The foot controls are a mash-up of ABM parts, with custom mounts and linkages by Impuls. Impuls also fabricated a new coolant expansion tank, and the stainless steel four-into-one exhaust headers. The muffler is a titanium unit from GPR, and the whole system has been finished in black.

The K100 also features a new 3D-printed intake manifold, and a 3D-printed battery box that houses two tiny LiFePO4 batteries. For the tires, the crew chose a set of grippy Pirelli Sport Demons. 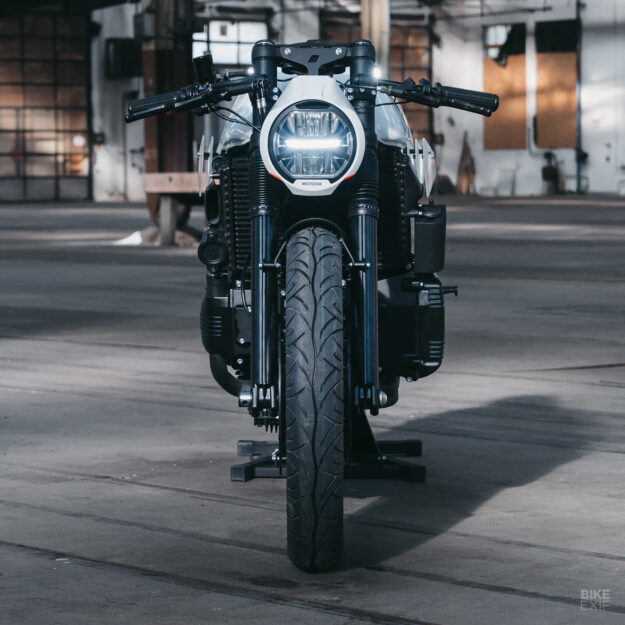 Most of these parts are available from Motoism’s online store, along with a few items not pictured here. There are multiple options for the tank ‘wings,’ plus a license plate bracket… but the paint job is up to you.

Here, Motoism and Impuls opted for a simple, yet effective, design. BMW Alpina white dominates the bodywork, punctuated by bright red stripes. Everything below the line has been blacked out, further emphasizing the new kit. 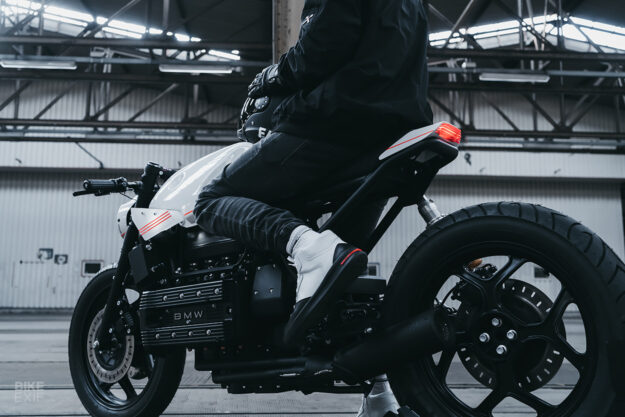 A pair of matching custom sneakers from VOR Shoes completes the set. Although if this was our K, those white kicks would be filthy in no time. 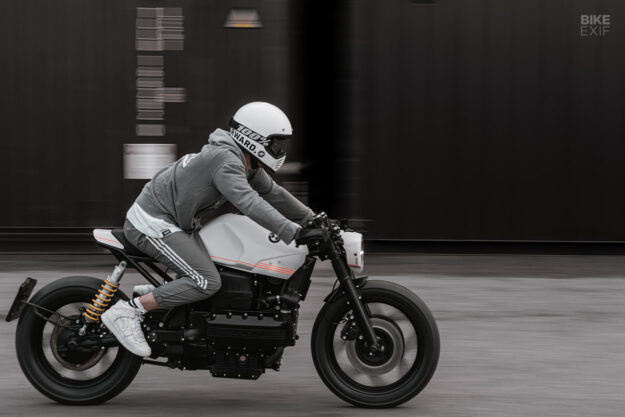