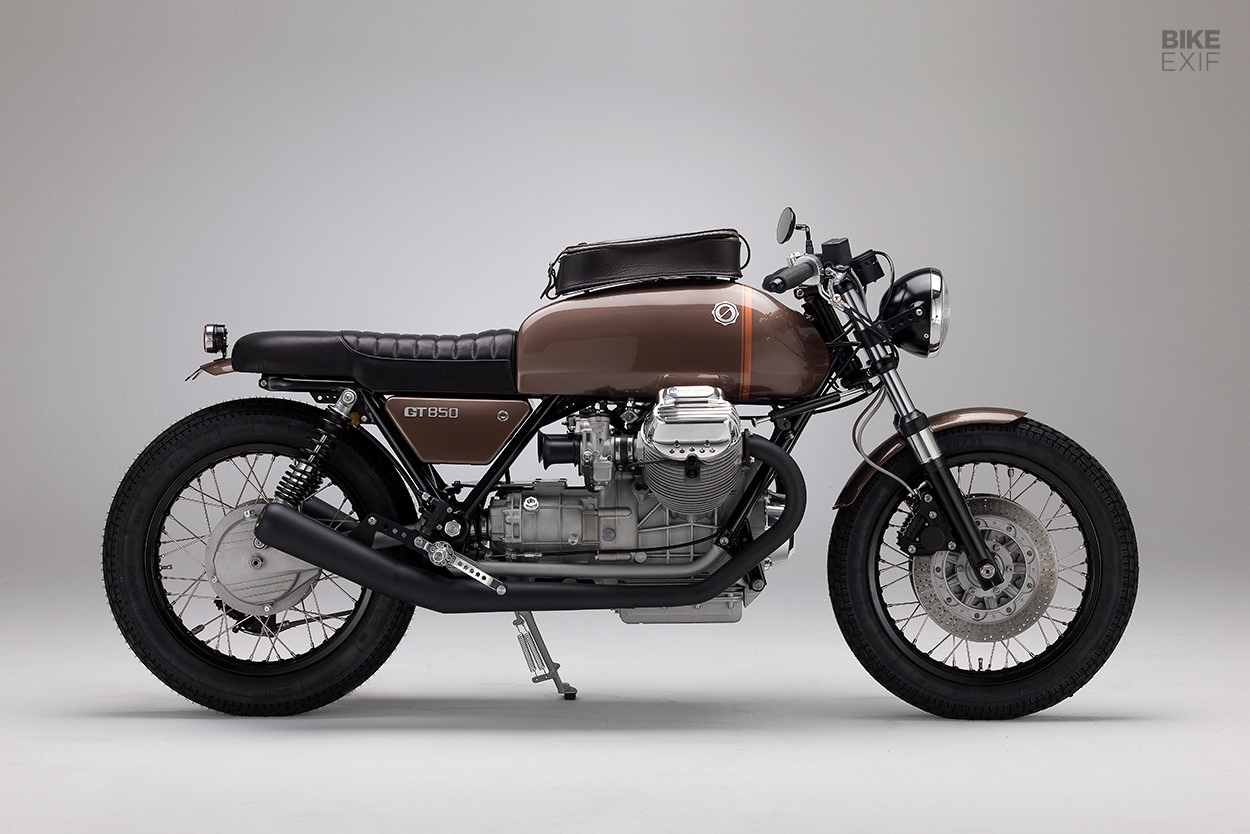 Axel Budde believes that motorcycle travel should be done in style. He’s the founder of the Moto Guzzi specialist shop, Kaffeemaschine, who have just built the third machine in a limited series of Guzzi 850-based Grand Tourers. And just like everything else they’ve produced, it’s impossibly elegant.

Kaffeemaschine’s GT series was conceived last year, when a client requested a bike that prioritized comfort for longer rides. It got Axel thinking about how seldom he sees classic bikes out on the open road—and how the touring scene is saturated with overloaded modern adventure bikes. So he put his imagination to work, and built the first two GT prototypes. 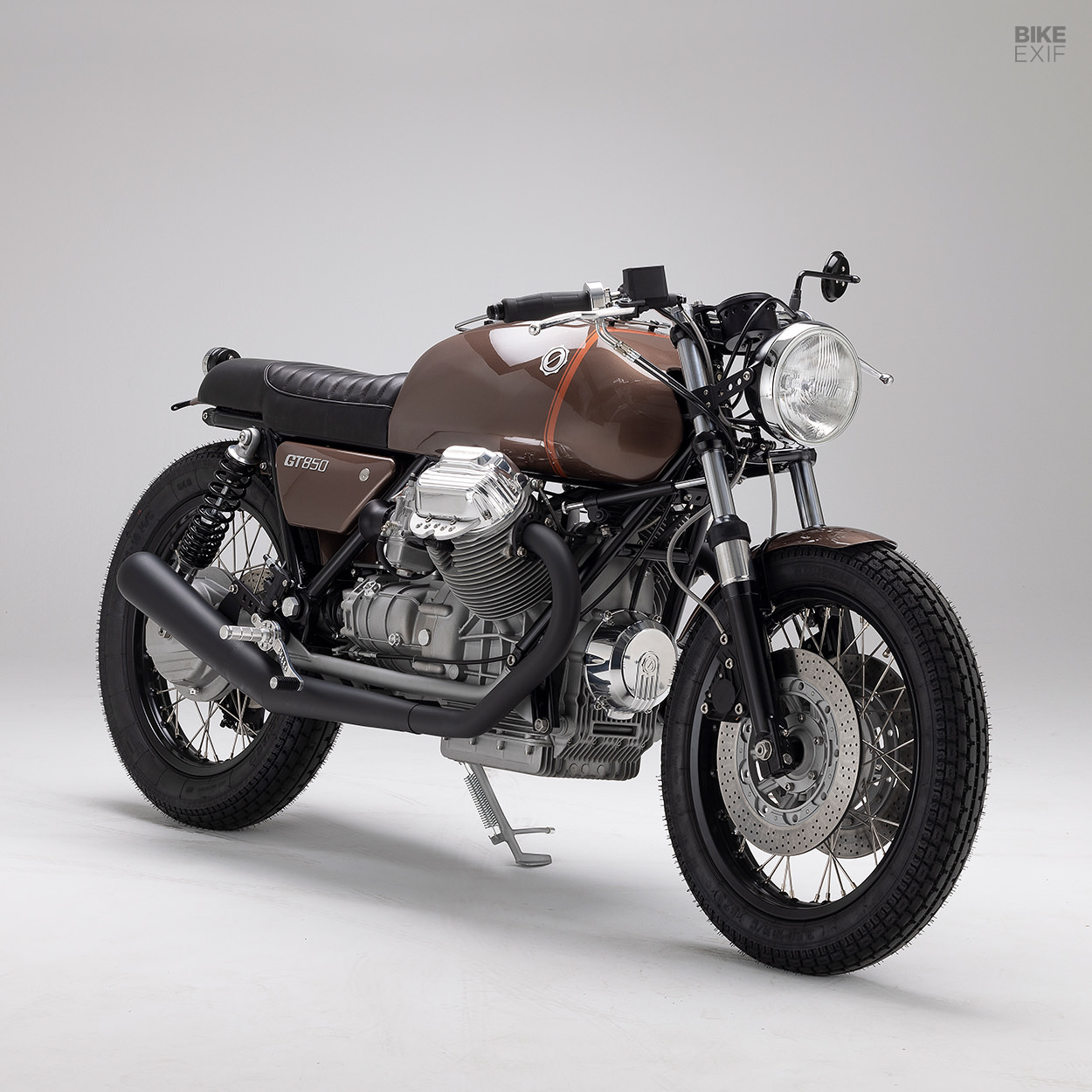 The latest build follows the same template, albeit with subtle refinements. It’s based on a 1982-model Moto Guzzi 850T4, but most of the original machine has been upgraded with Kaffeemaschine parts.

The work started with the Guzzi’s motor. The crew overhauled it with a balanced crank, a lightened flywheel, an electronic ignition and a modern alternator that would play nice with the new Lithium-ion battery. Also in play are a set of Dell’Orto PHF carbs, and a pair of stainless steel Kaffeemaschine exhausts. 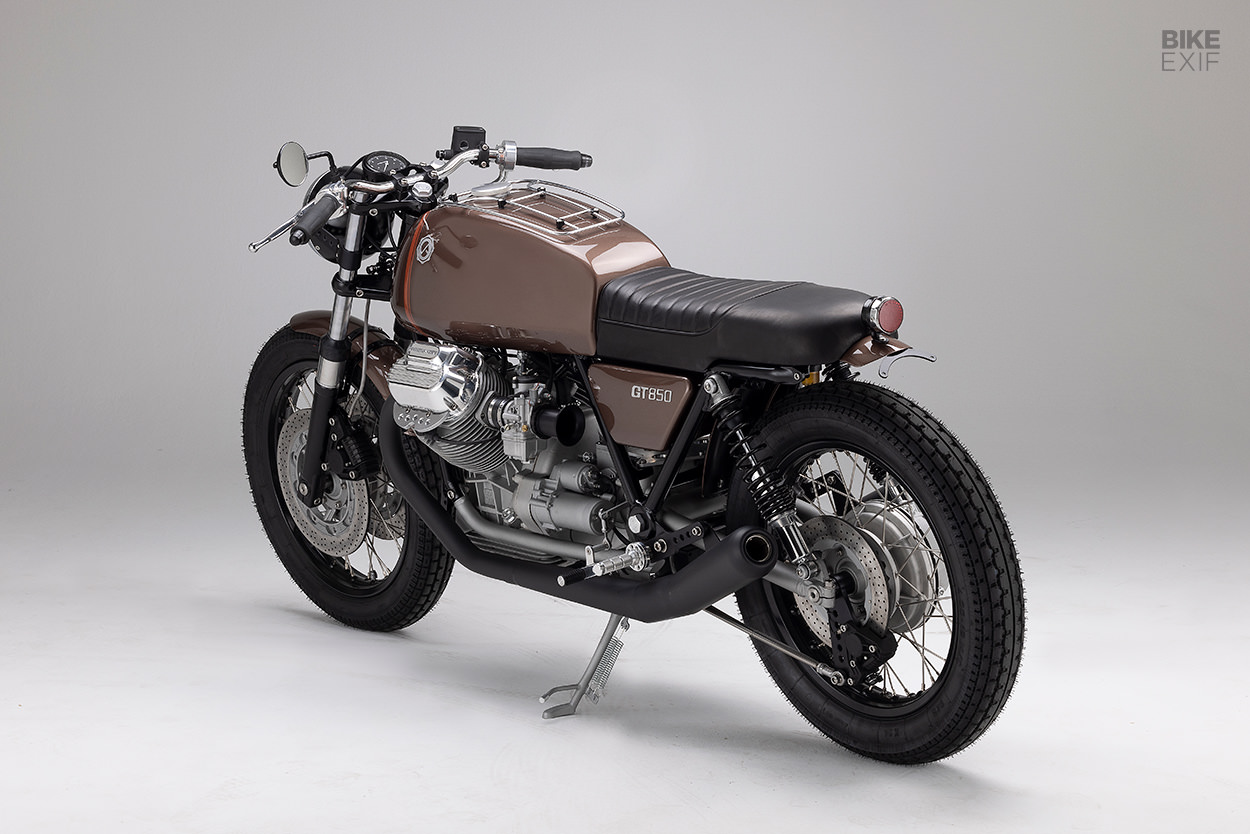 Previous GT machines from the German workshop were bored out to 1,000 cc, but Axel didn’t see the need here. The engine improvements have bumped the torquey V-twin’s output to 76 hp—and a diet has brought its weight down to 184 kilos [406 lbs]. That’s ample for lazy weekend tours.

Most of the weight was saved on the bodywork, which is all new, and made from carbon fiber. Kaffeemaschine used the same molds that they designed with the first two GT prototypes, and plan to make more in the future. 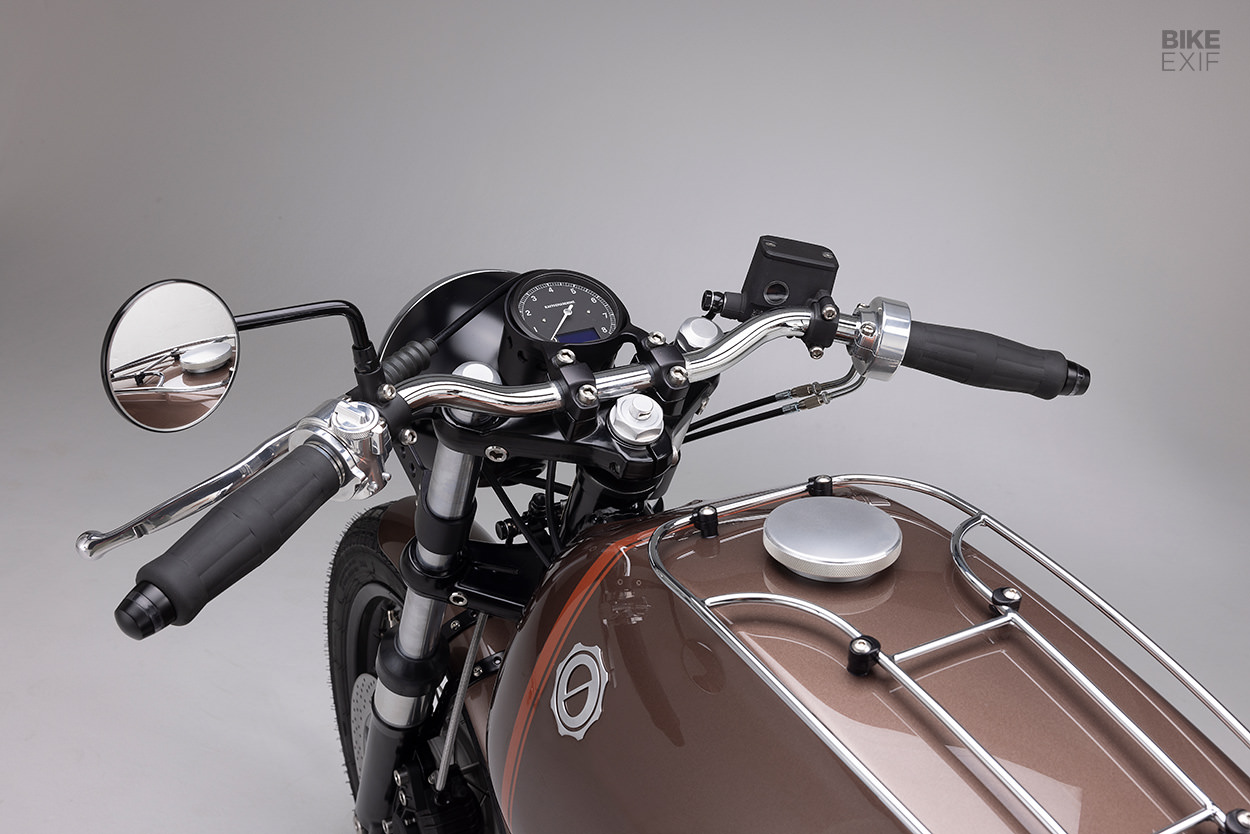 The aesthetic is slick and understated, just like all of Kaffeemaschine’s customs. The tank is a their own design, but it’s loosely modeled on the Laverda SF.

Up top is an elegant luggage rack, designed to carry a tank bag via a bespoke quick-release system. Both the seat and tank bag are covered in matching aniline leather, and there’s a transparent pouch on top of the bag for maps, or a mobile phone running a navigation app. Plus there’s a USB charge port nearby too; it’s hidden in the main steering stem nut. 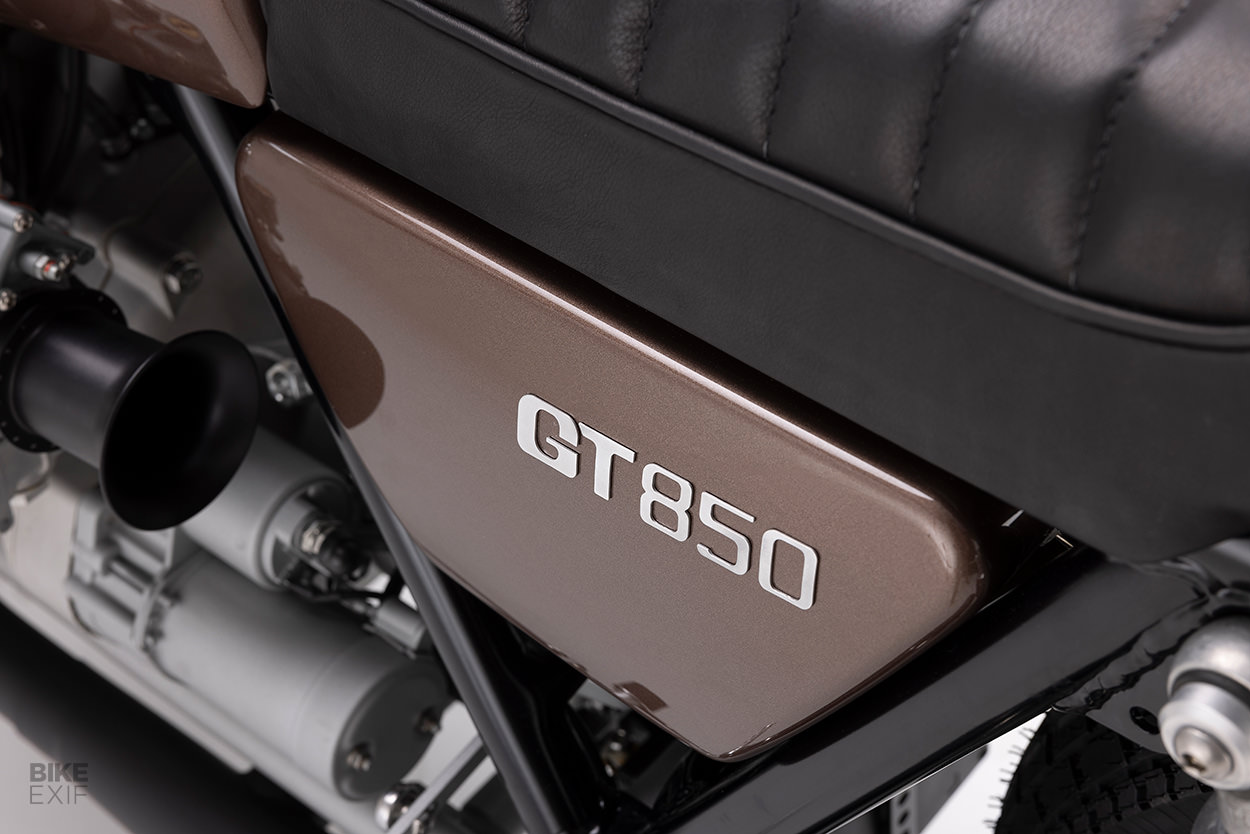 There’s more packing space under the seat, where a carbon fiber box has replaced the stock side covers and air box. It’s lockable, and has enough space for a wallet, phone, water and a pullover.

Extra care’s been taken to make sure this gentleman’s tourer rides as good as it looks too. A new set of Ikon shocks do duty out back, while the forks have been refurbished with upgraded FAC internals. 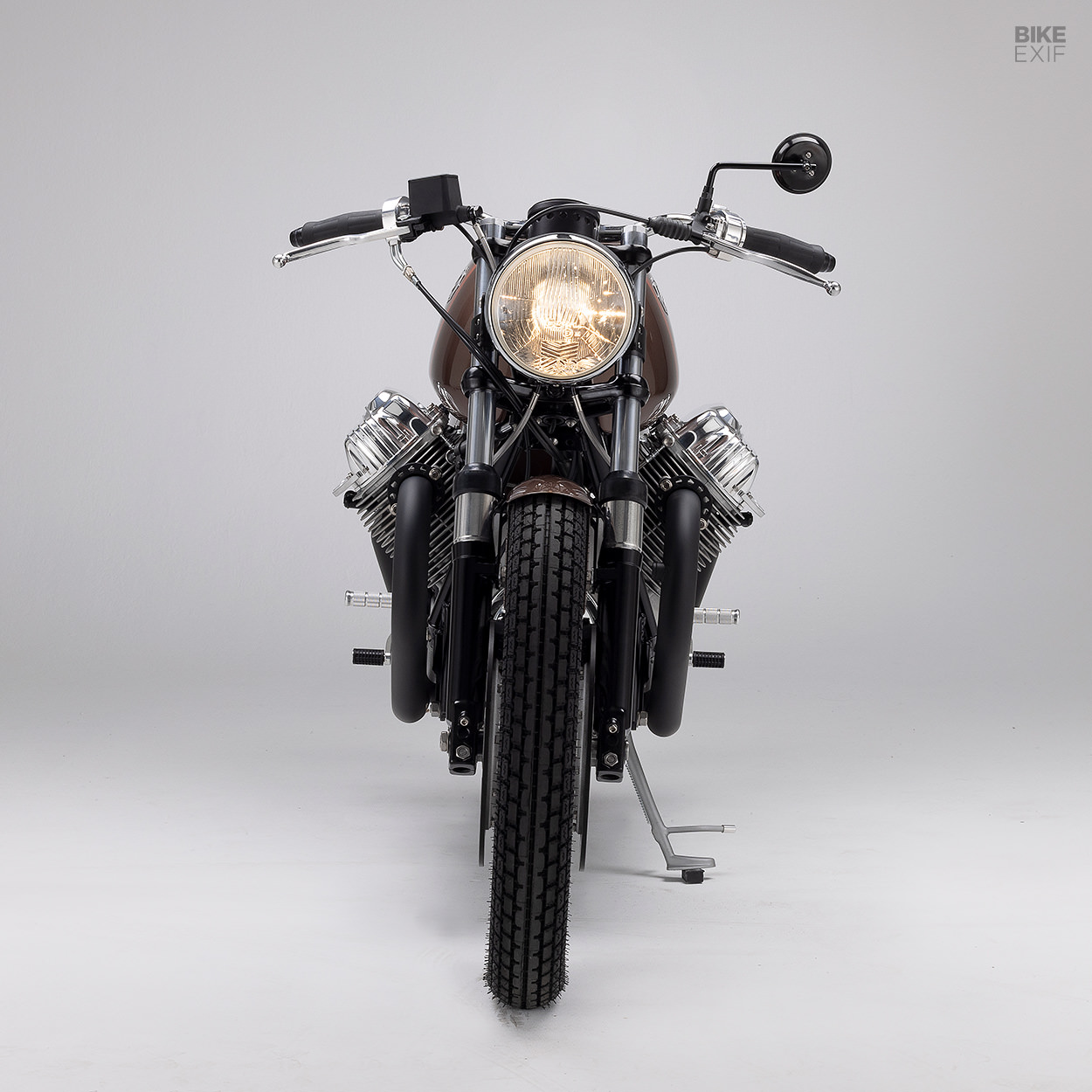 There’s some subtle wizardry going on up in the cockpit too. Custom riser clamps double up as a speedo mount, holding a Kaffeemaschine-branded speedo. Low-slung handlebars wear new grips, bar-end LED turn signals and a single mirror, and the key ignition’s given way for a keyless RFID system. 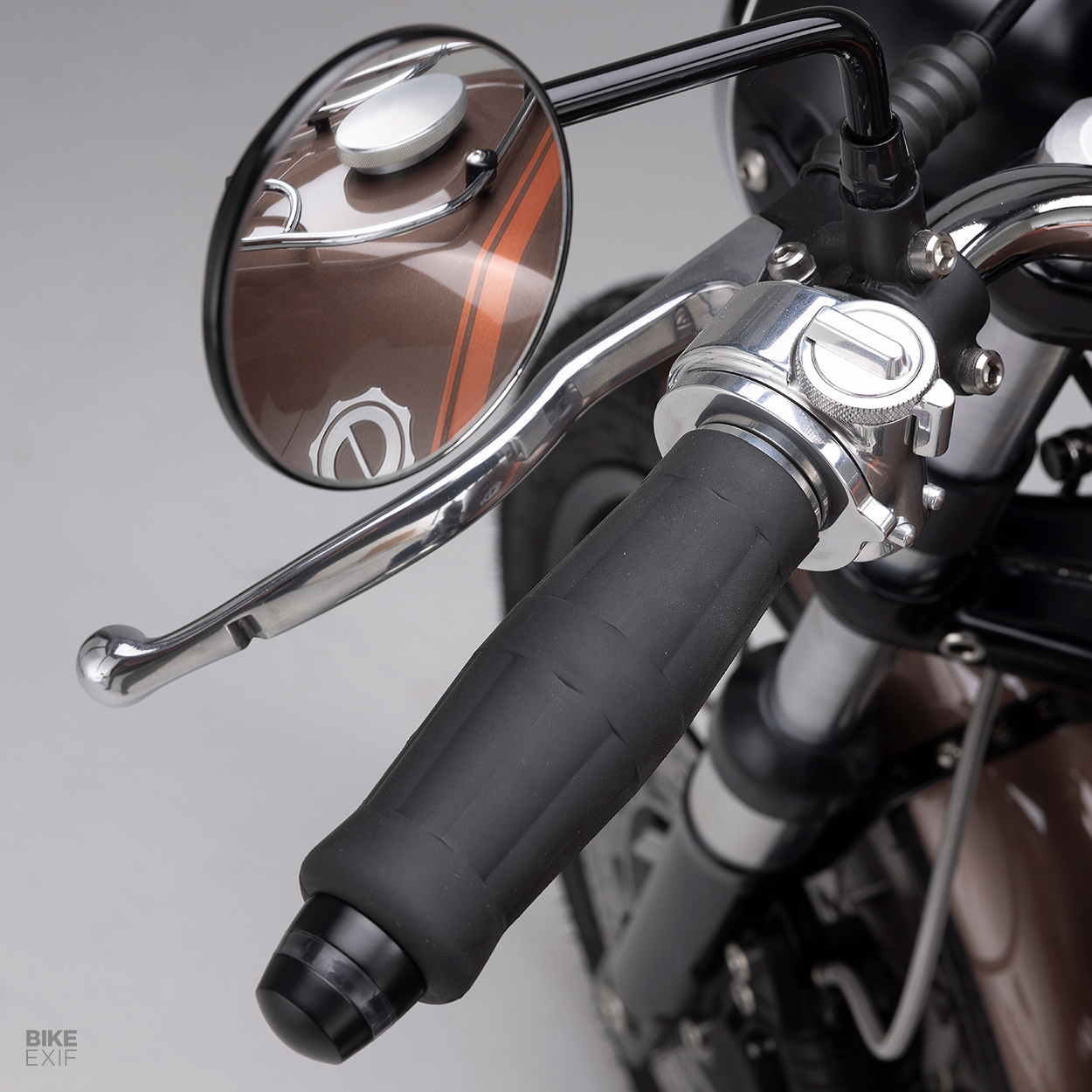 The polished switch cluster on the left side is Kaffeemaschine’s own design, and one of the classiest we’ve seen. Traditional round head- and taillights, and new rear-set pegs, round out the parts spec.

Naturally, this 850’s finishes are as well considered as its upgrades. Axel and his team showed maximum restraint, with a simple livery and a tasteful balance of black and polished parts. 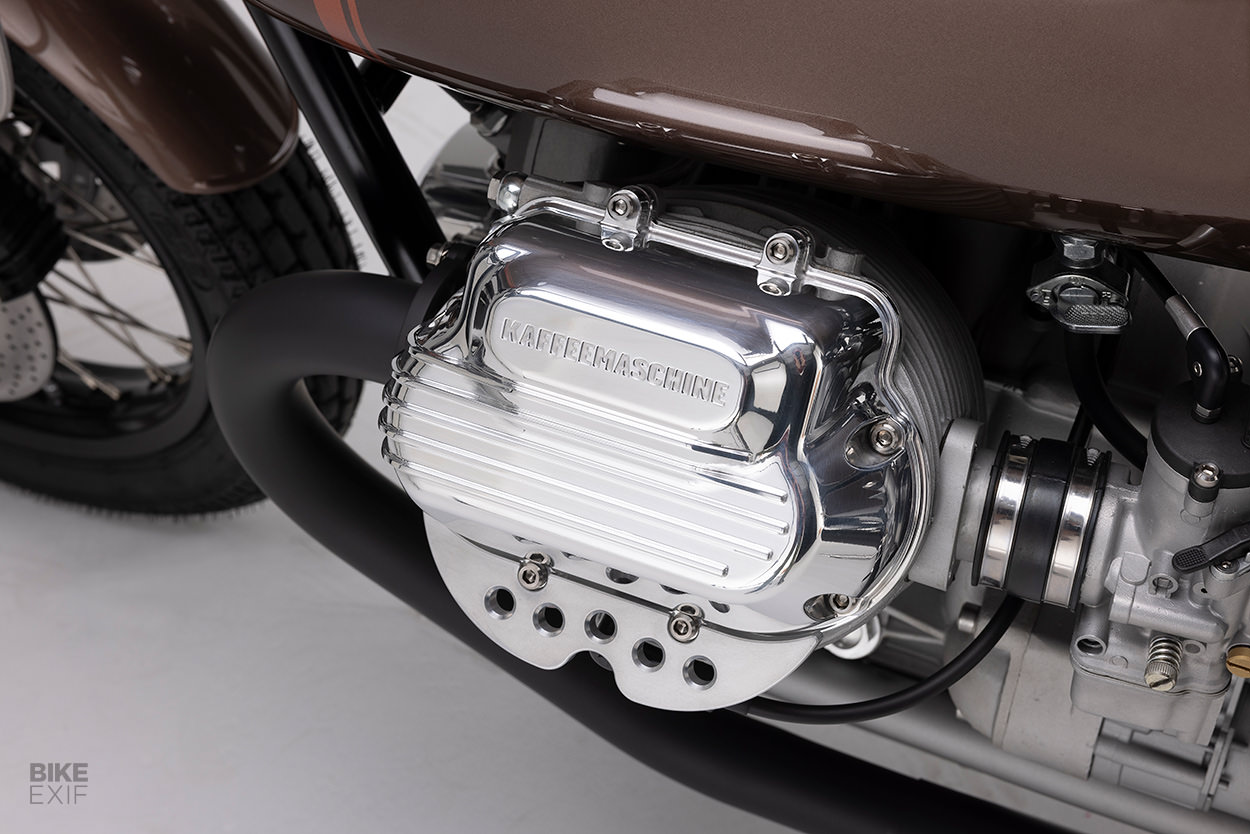 Now that this ‘GT850’ is all buttoned up, it’s for sale—along with its own tool kit, bike cover, owners manual and TÜV certificate. In the meantime Axel is working on ideas for the next GT model, like a new front fork setup. And that means he’ll be taking it on a long trip to put it through its paces.

“I’ll be wondering, once again, what all the other riders have inside of their massive panniers,” he says wryly. 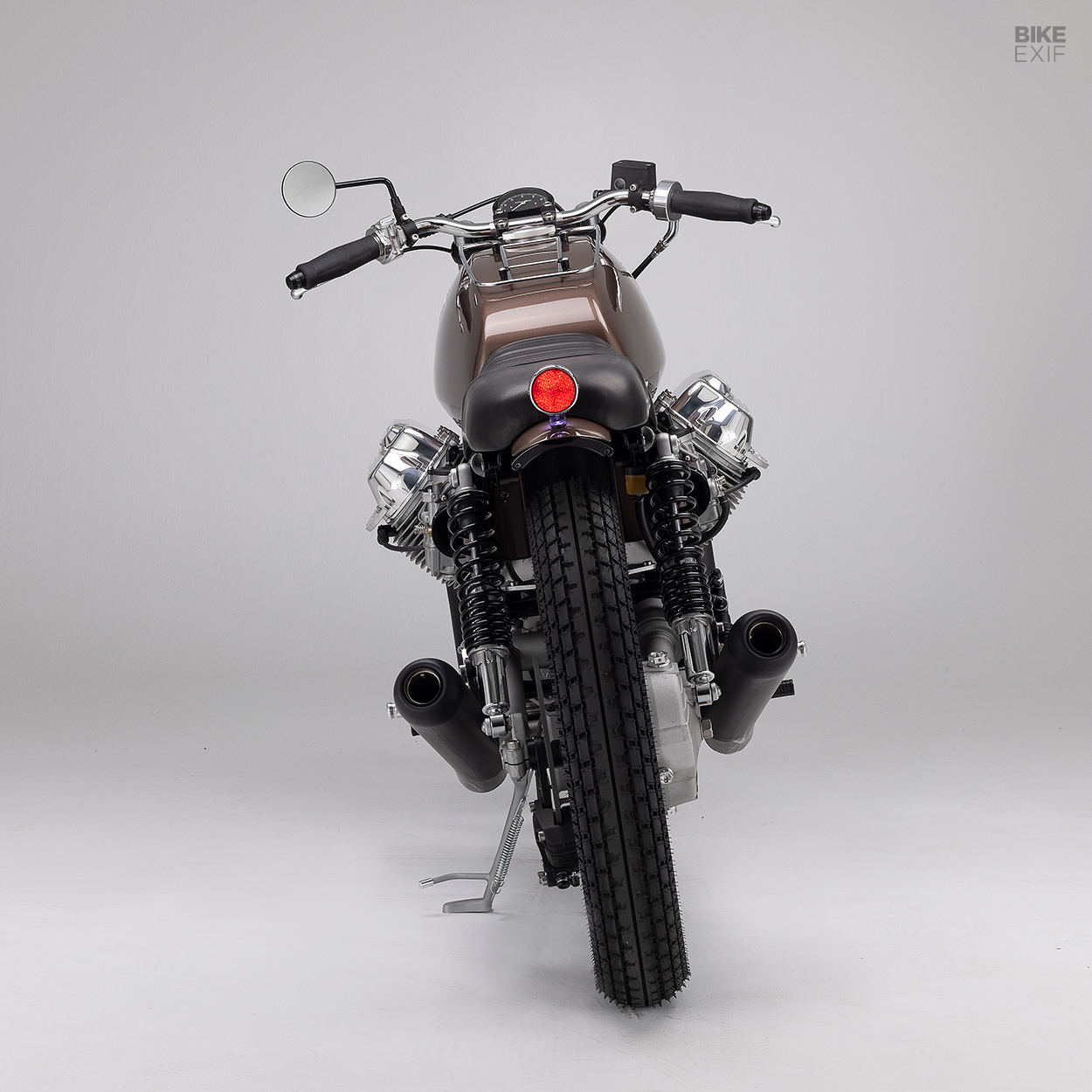