L’ultimo: A Ghezzi-Brian 1100 built by a Yorkshire engineer 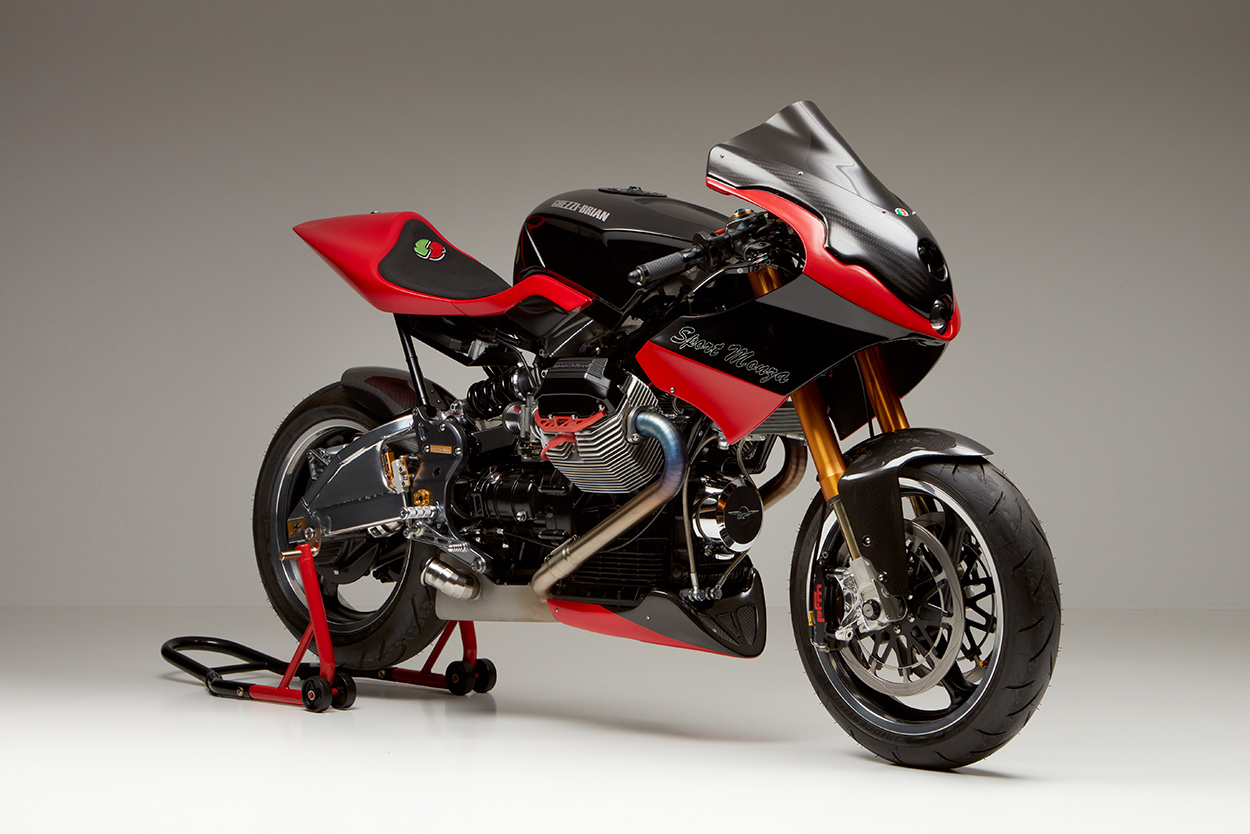 Back in the 90s, Moto Guzzi was mostly associated with old school, rumbling v-twin engines. Ducati had stolen the sporting crown, and the Mandello factory was increasingly out of sync with the market. Production figures tumbled: highs of over 45,000 in the early seventies fell to a dismal 3,274 units in 1993.

As part of an effort to turn things around, Guzzi revealed the 1100 Sport. Still an air-cooled v-twin, it pumped out 90 hp and offered a more relaxed alternative to the Ducati 916. 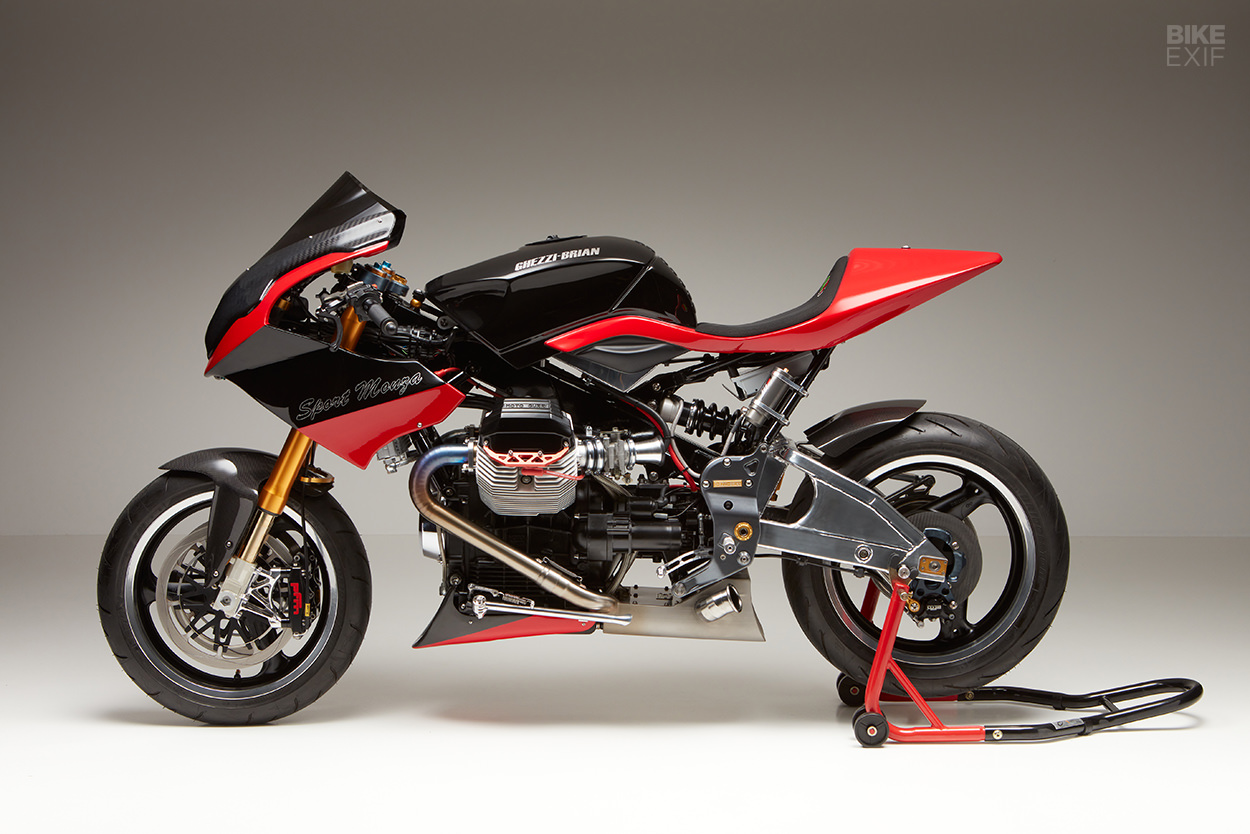 These days, the 916 is a bona fide icon. But not everyone wants a backbreaking sportbike that doesn’t come alive until you hit 6,000 rpm. So the classic Guzzi has a small but devoted following, and is well served by aftermarket specialists like Ghezzi-Brian.

This 1100 Sport shows what can be done if you’ve got the motivation and the moolah. It’s owned by electronic engineer Simon Thackeray, who hails from the cathedral town of York in northern England. 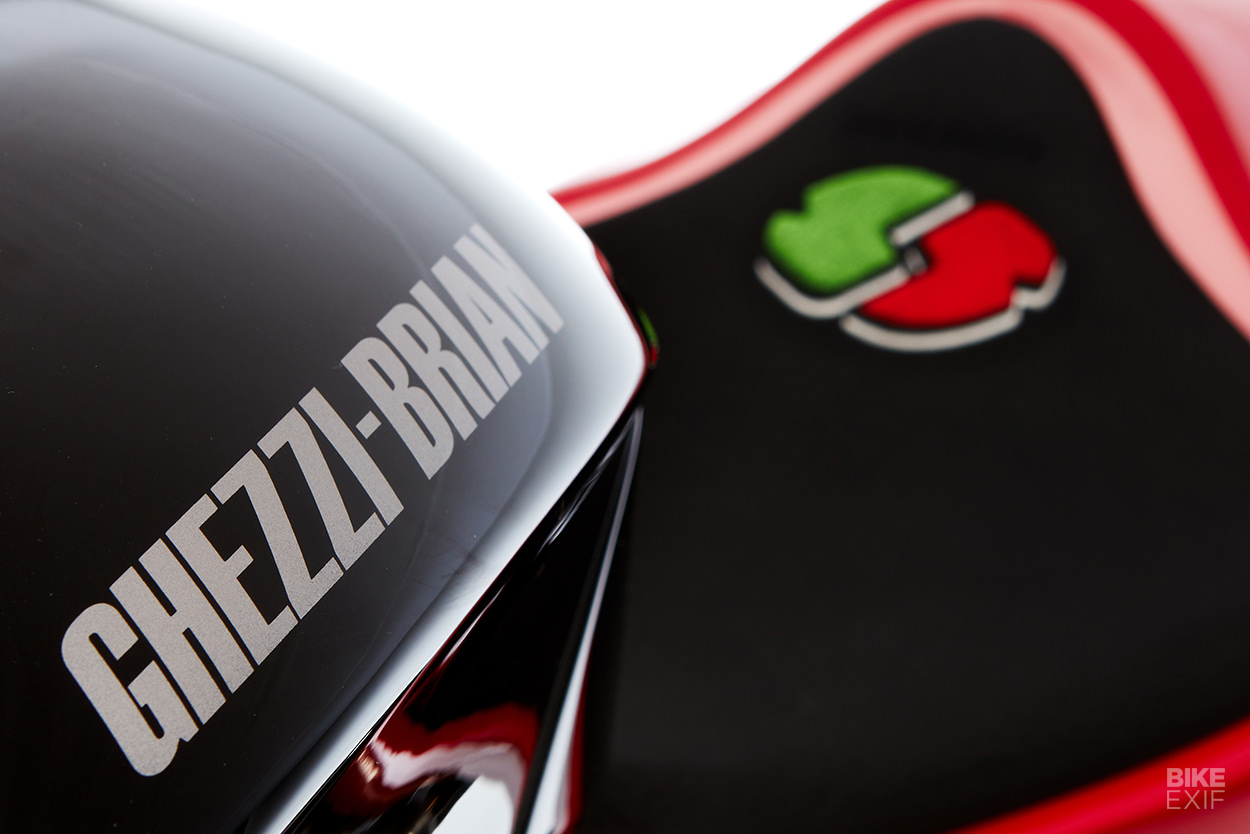 Simon’s wife was also tiring of the Guzzi pillion, and was happy for him to buy a BMW GS to increase comfort levels. 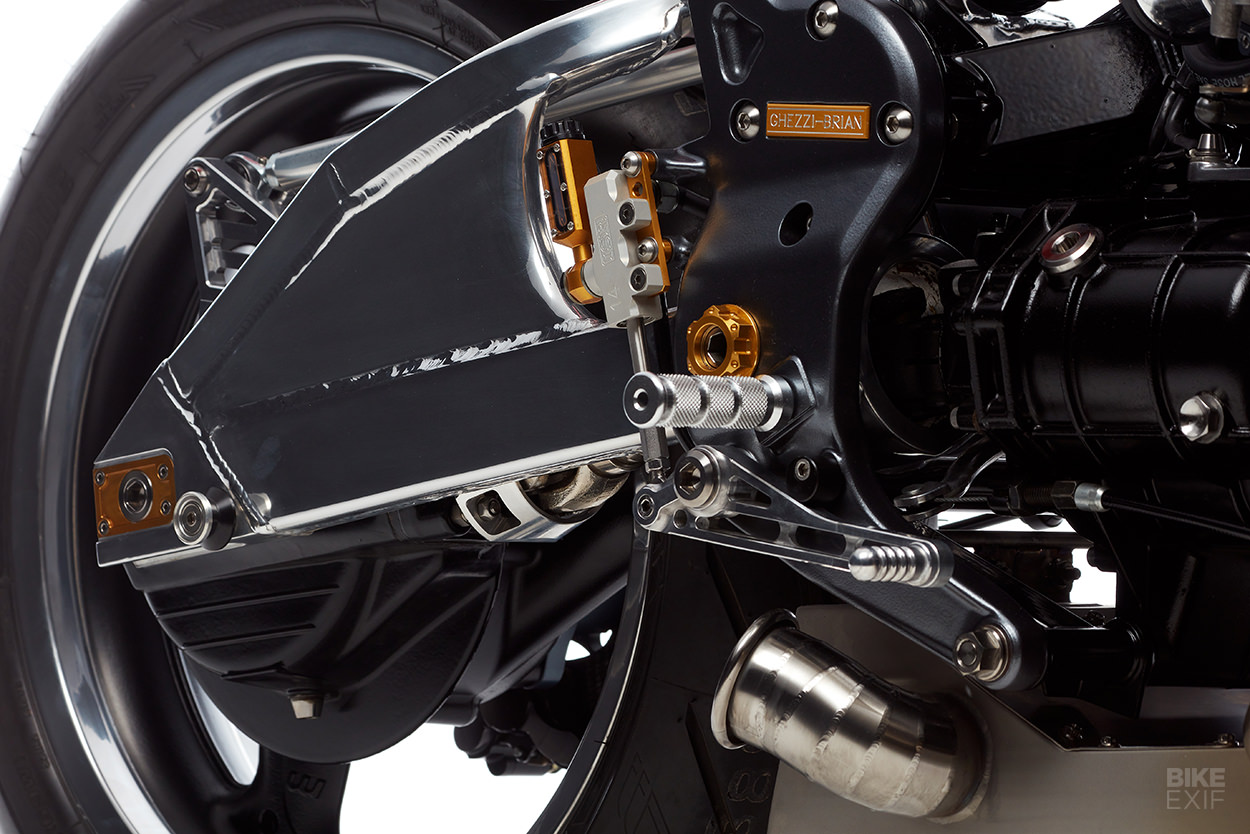 Simon spotted the Ghezzi Brian ‘Sport Monza’ conversion kit and ordered most of the options—including a GPone aluminum swingarm. But that was only the start before his engineer’s mindset kicked in.

“When swapping out redundant parts like the subframe, petrol tank, footrest hangers and so on, I realized the weight was dropping off,” he says. “So I went to the next level and discovered titanium.” 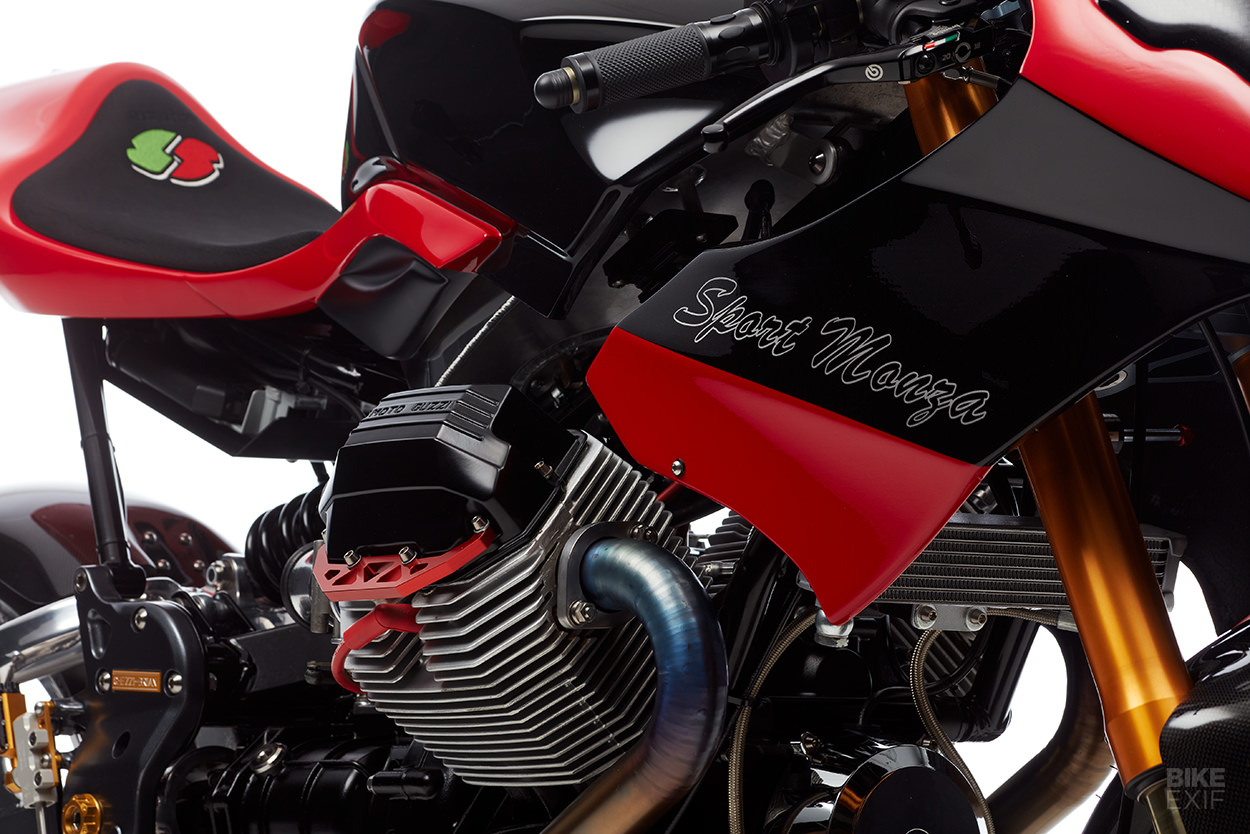 Simon focused on saving weight, rather than increasing the horsepower. “The motor was just run in,” he explains. With help from Chris Horton, a friend with a CNC workshop, he spent three years building the bike up to the point we see it here.

It’s now 53 kilos (116 pounds) lighter than the day it left the Mandello factory—which puts kerbside weight at around the 400-pound mark. 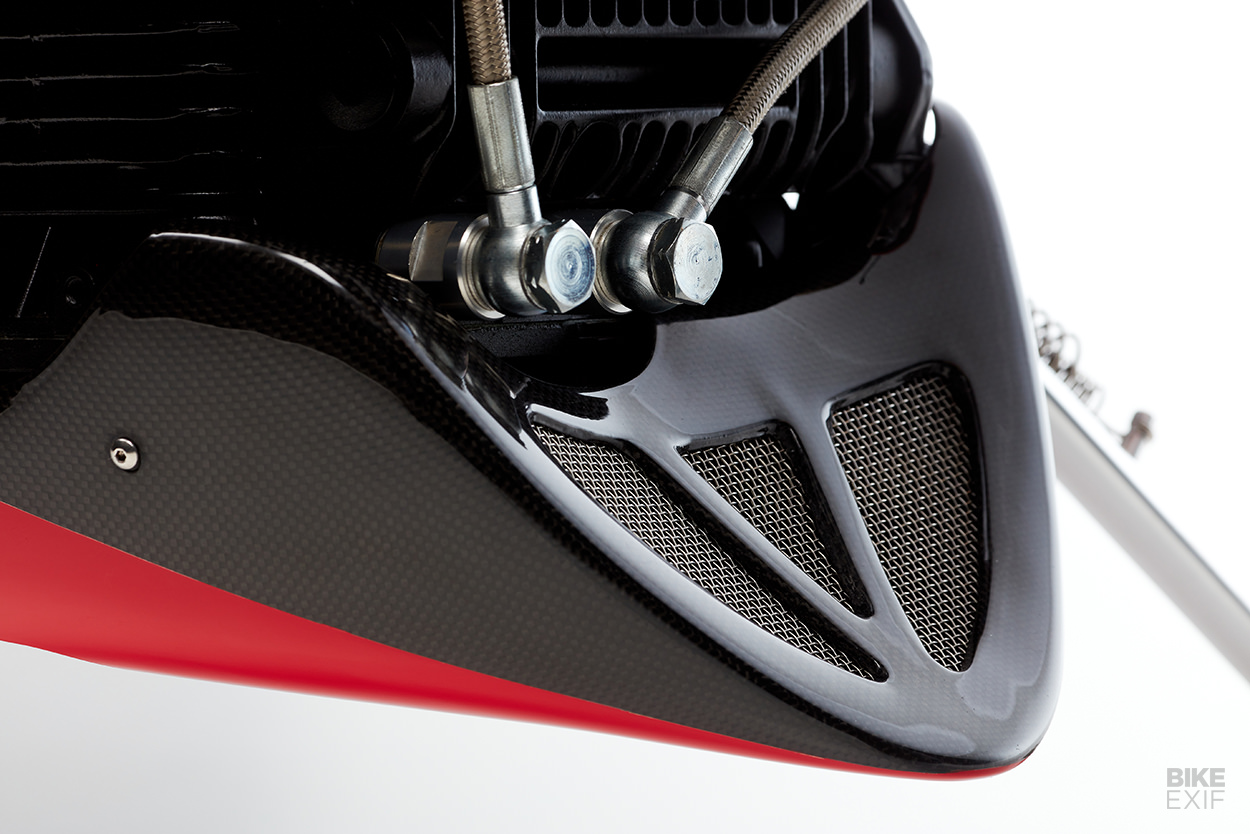 The Ghezzi-Brian kit is extensive. You get front and rear subframes and new bodywork, including a one-piece fiberglass tank cover and seat unit, and a carbon fiber belly pan.

Less obvious upgrades are the fuel tank—with Marelli fuel pump—and final drive torque arm, both in aluminum to match the mirror-finished GPone swingarm. A modern oil cooler reduces stress on the fuel-injected 1064 cc engine, which also gets a set of bellmouth instakes. (Simon has also wired in a remapped ECU from famed Guzzi tuner Will Creedon.) 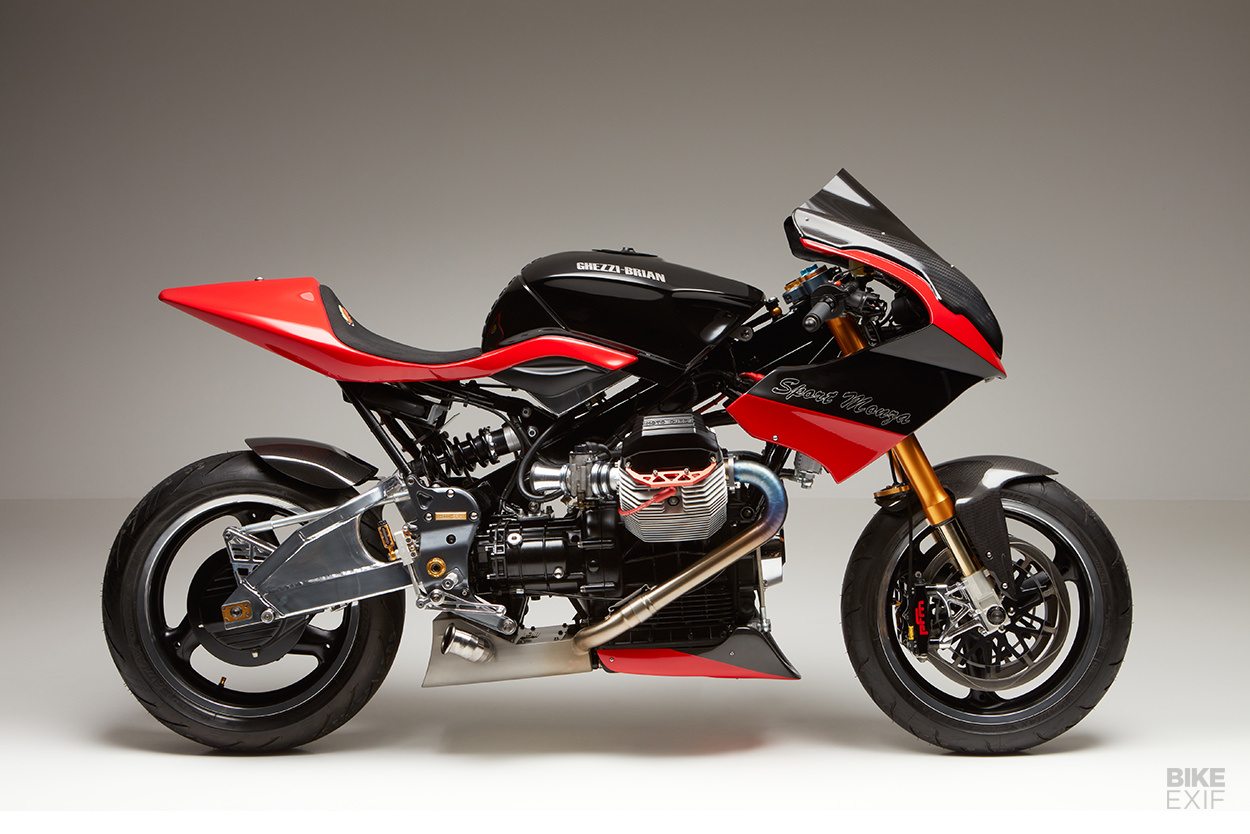 That’s pretty impressive stuff to start with, and Ghezzi-Brian kits are well regarded in the Guzzisti community. But this 1100 now operates on a whole new level: it’s got Öhlins FG324 forks, front brake disks and six-piston calipers from PFM, and Brembo RCS controls.

They’re all connected via braided lines and the rear braking is tweaked to match, with a mix of Ducati 916, PFM and ISR parts. The original WP rear monoshock has been refurbished and lengthened to correct the stance of the bike. 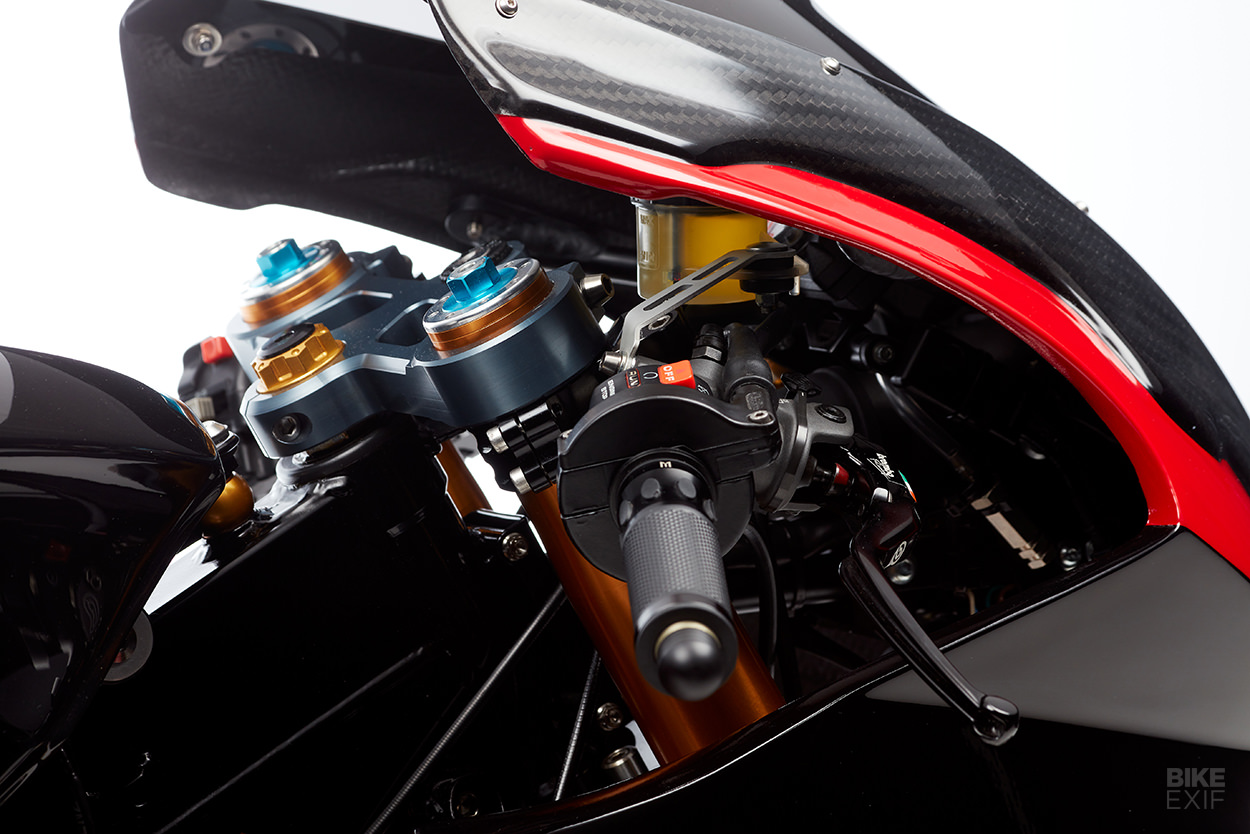 Clunky cockpits are one of the least charming aspects of most 90s motorcycles, so Simon has upgraded the Guzzi with Renthal clip-ons, Gilles grips and a Koso GPS speedo.

He’s also installed a Bitubo adjustable steering damper as protection against potholes on Yorkshire roads, and fenders to keep the rain and muck away. Ducati 848 owners should recognize the carbon unit at the front, and there’s a carbon hugger over the rear wheel too. 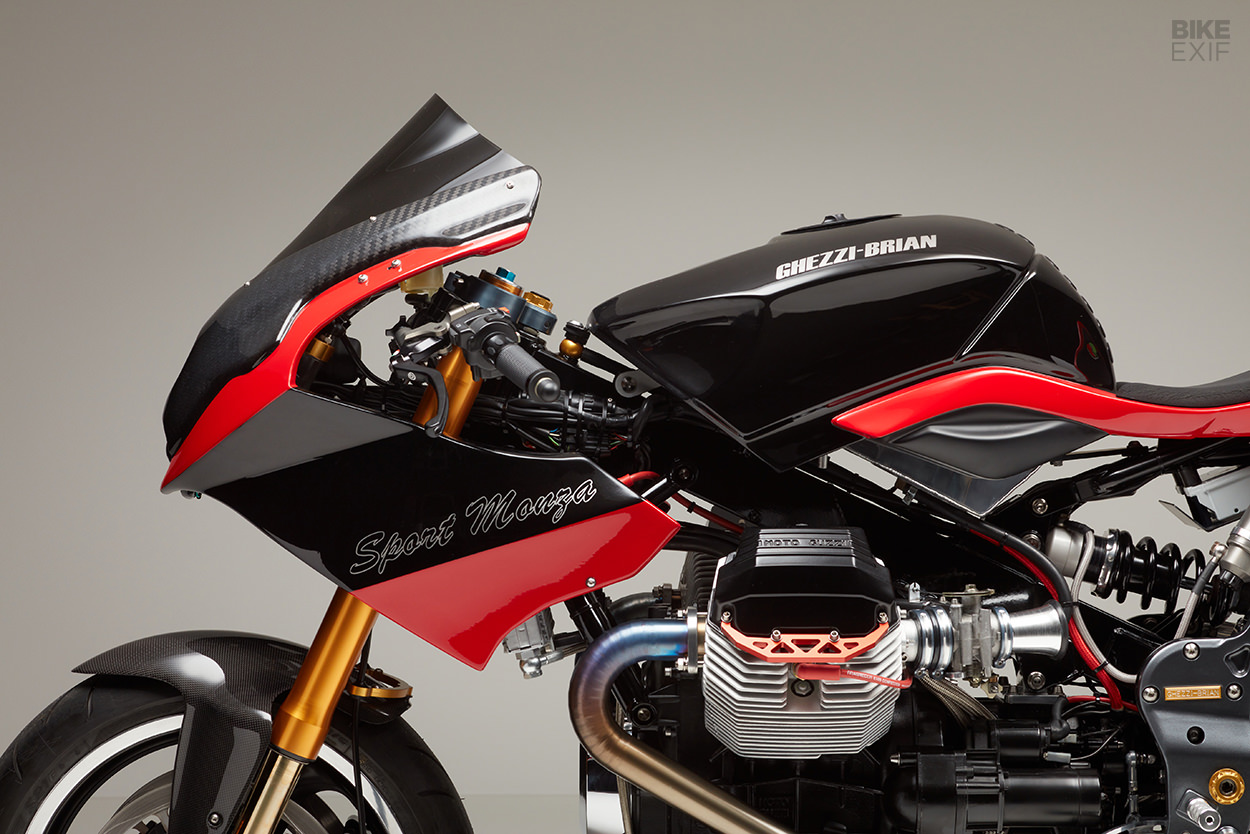 We haven’t even got to the fabrication yet. Simon supplied us with a huge list of the parts he made up, many with the help of CNC whiz Chris Horton. It’s too many items to repeat, but it seems like virtually all of the smaller components—from fasteners to mounts to spacers—have been remade in titanium, aluminum or carbon fiber.

That includes the new yokes and steering stem, the exhaust system from Charles Metcalfe of CSK, and even the fairing. Yes, it looks like the Ghezzi-Brian kit fairing, but Simon has recreated the piece in carbon fiber by taking a mold from the polyester original. 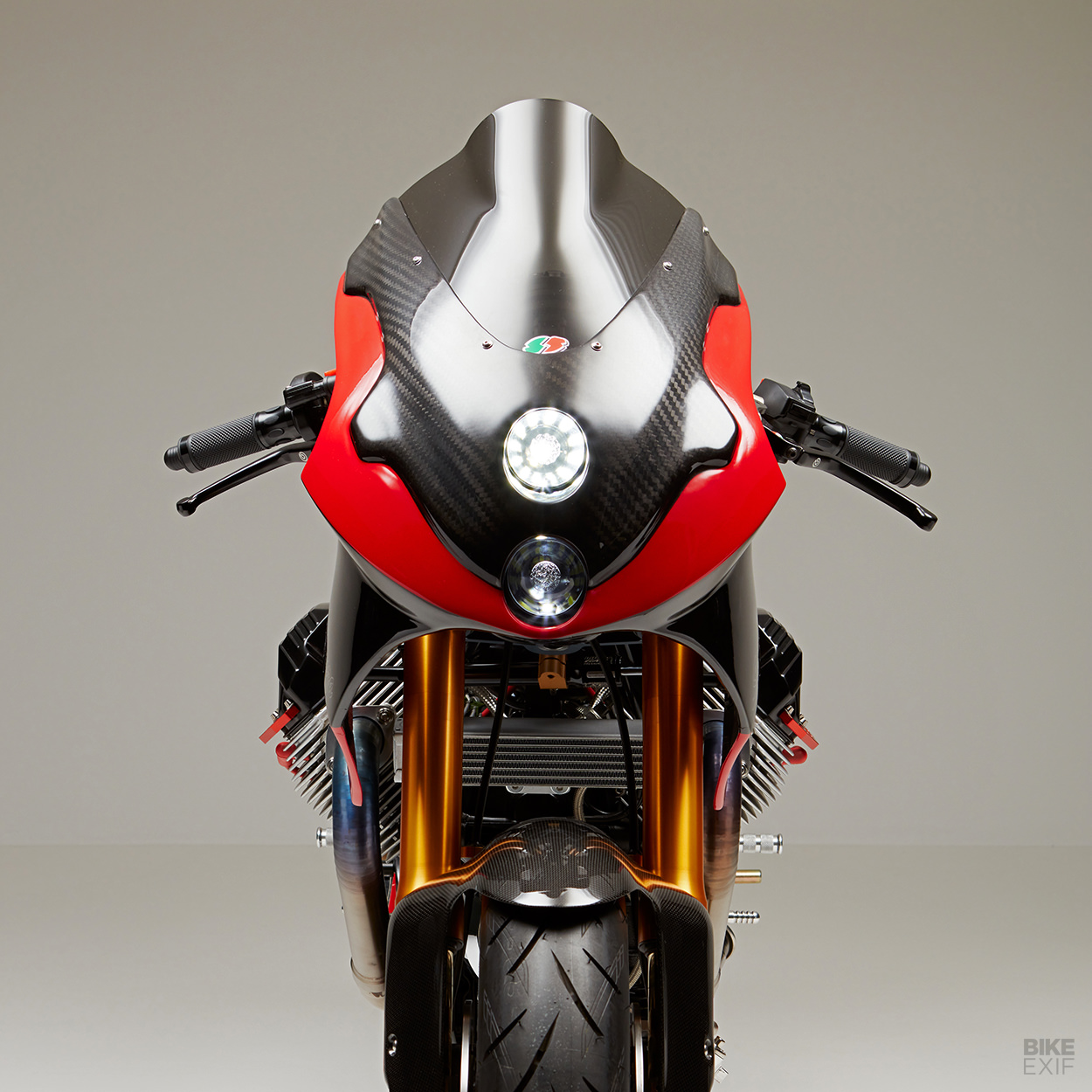 More work has gone into this Ghezzi-Brian than any other bike we can recall of late, aside from fully fabricated customs from folks like Max Hazan.

It occurred to us that Simon could probably have bought a more modern sportbike with the money he’s ploughed into this machine. But that’s not the point. He’s prepped his Guzzi for another quarter-century on the road—and there’s no other machine on the road quite like it. We have a feeling this is going to remain a one-owner bike for quite a while yet. 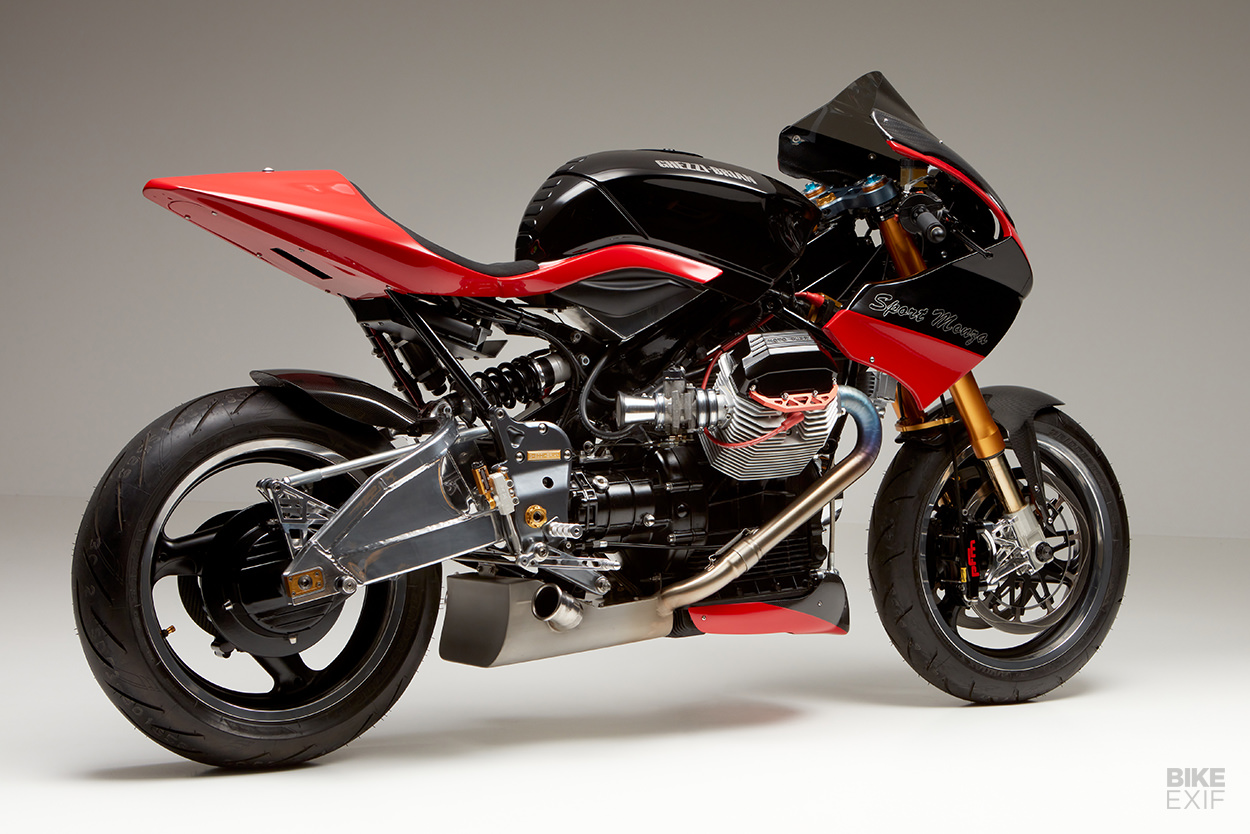