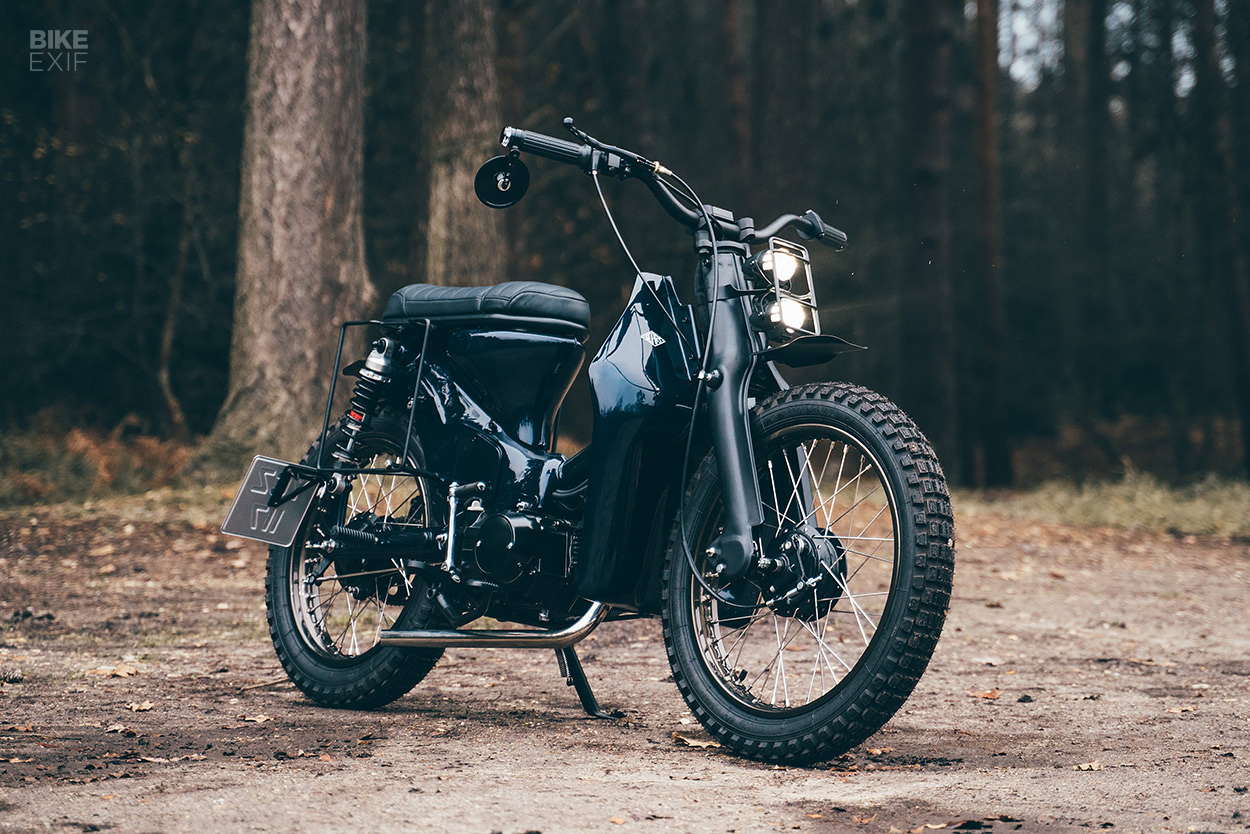 The saying goes that there’s no replacement for displacement, but that’s not always true. Small bikes can be as much fun as big bikes—provided you’re not in a major hurry to get anywhere. And what better way to take in the scenery, than with a custom Honda Super Cub scrambler?

This diminutive dual-sport started out as a 1979 Honda C70 Super Cub, and was given a thorough reworking by Jack Lamburn. Based in Devon in the UK, Jack builds custom bikes after office hours as Scar’s Motorcycles. He’s had a few bikes on display at the Bike Shed show in London in the past—which is how the owner of this Super Cub found him. 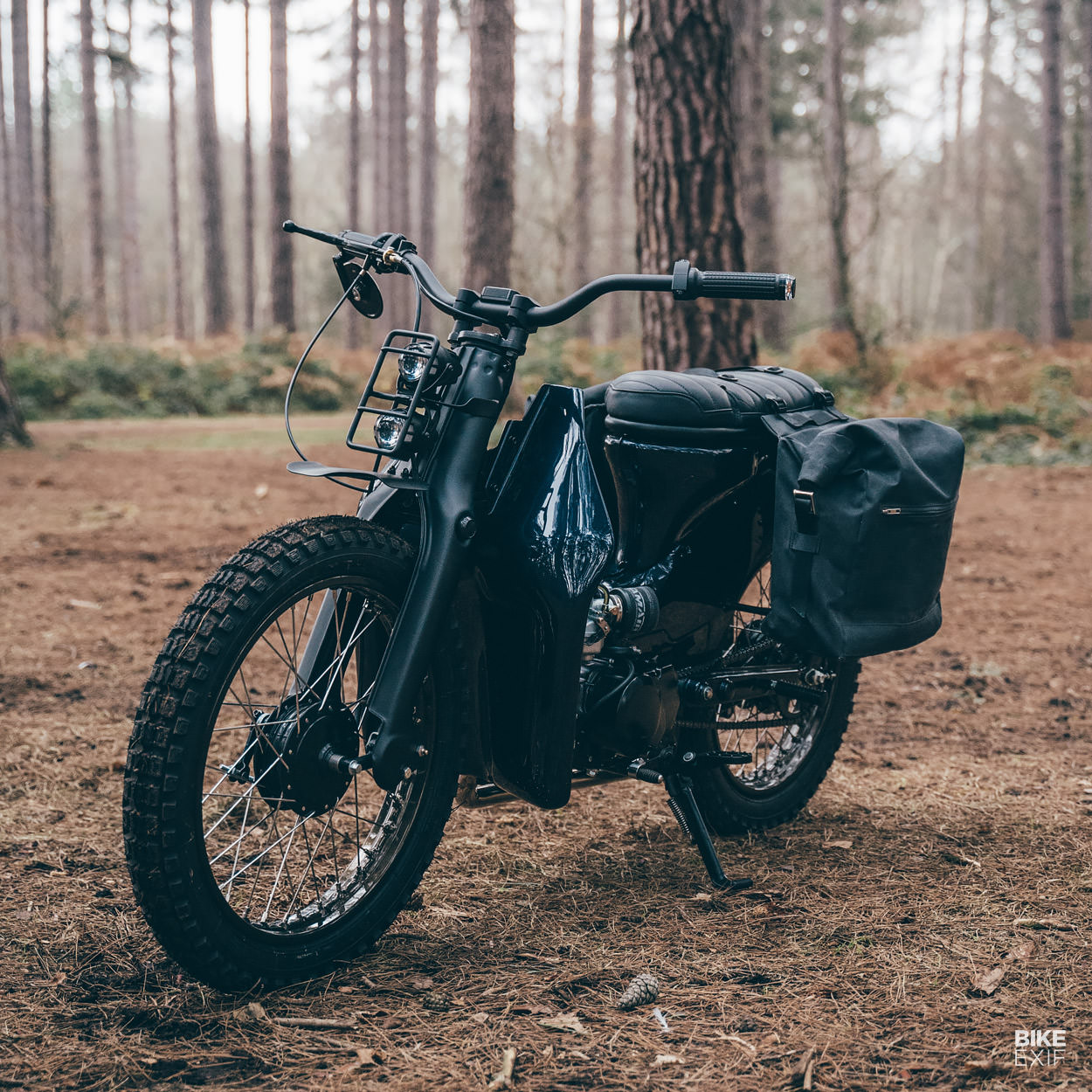 “The brief was completely open to me,” Jack tells us. “I drew up a couple of sketches, and we decided to go down the ‘urban scrambler‘ route. With my client it was agreed that the outcome would be a complete surprise, with no input from him at all… so no pressure to get it looking right then!”

“I started out by collecting imagery of parts I wanted to use that would suit the concept sketch. I wanted the bike to be as minimal as possible to pay tribute to the Cub’s original simplicity. With that in mind, I decided to keep the original geometry of the front forks and swingarm.” 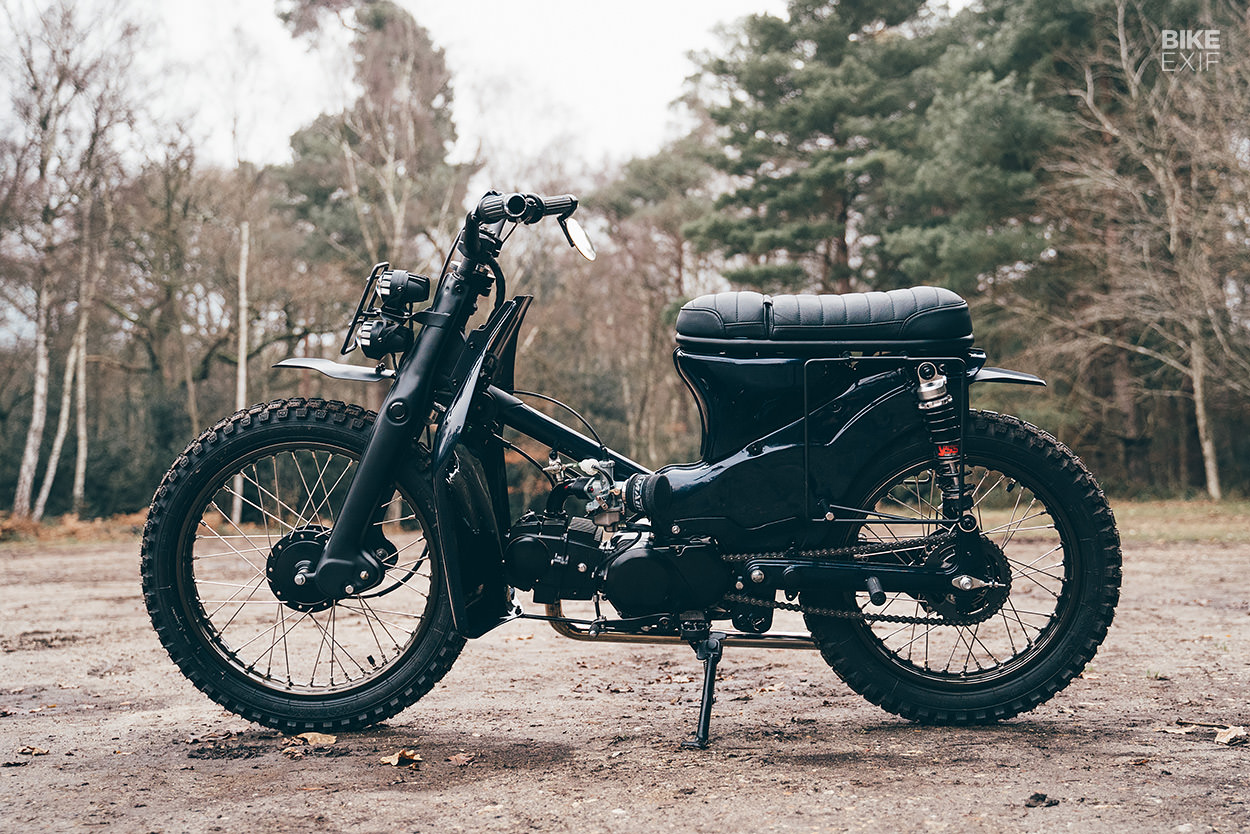 The first thing Jack hunted down was a new set of tires. He wanted treads that could handle some dirt, but that would also be small enough to fit the Cub, while maintaining the size difference from front to back that’s common on adventure bikes. A set of 18F/16R Heidenau K41s ticked those boxes.

Jack had a local wheel builder lace up new rims in matching sizes, with stainless steel spokes. To squeeze the new front wheel in, the forks had to be cut, widened and welded back together, and new spacers had to be machined. A set of longer YSS shocks at the back made room for the 16” rear wheel. 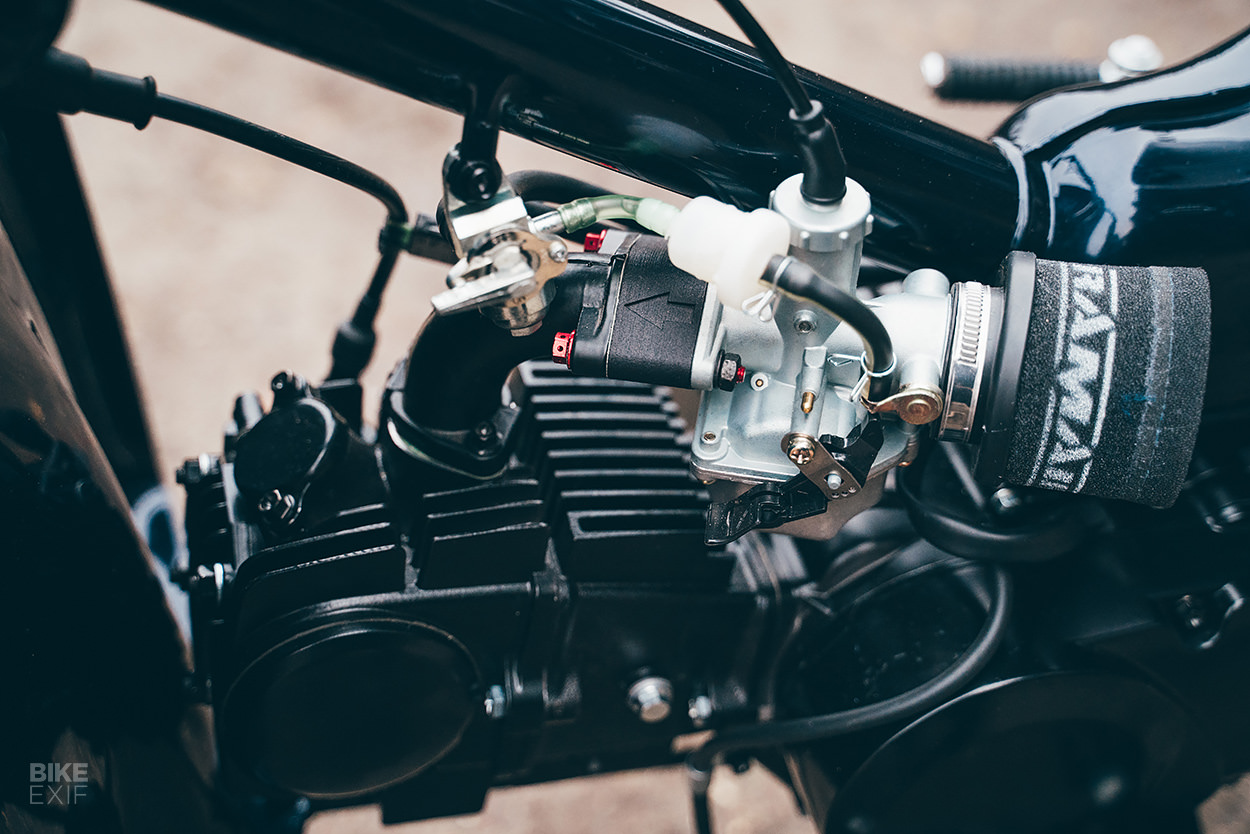 Jack’s client was clearly not after outright performance, but even so, the Cub’s 70 cc motor wasn’t going to cut it. So an upgraded 125 cc, four-speed ‘semi auto’ mill was ordered from OORacing in Kent—a company that specializes in Cub tuning.

The little Honda’s been converted to a 12V electrical system, and rewired around a Motogadget mo.unit box. There’s a Rick’s Motorsport regulator/rectifier mounted under the seat, with a Lithium-ion battery and the rest of the electrical bits stashed under the fuel tank. A 3D printed battery tray and access cover keep things tidy. 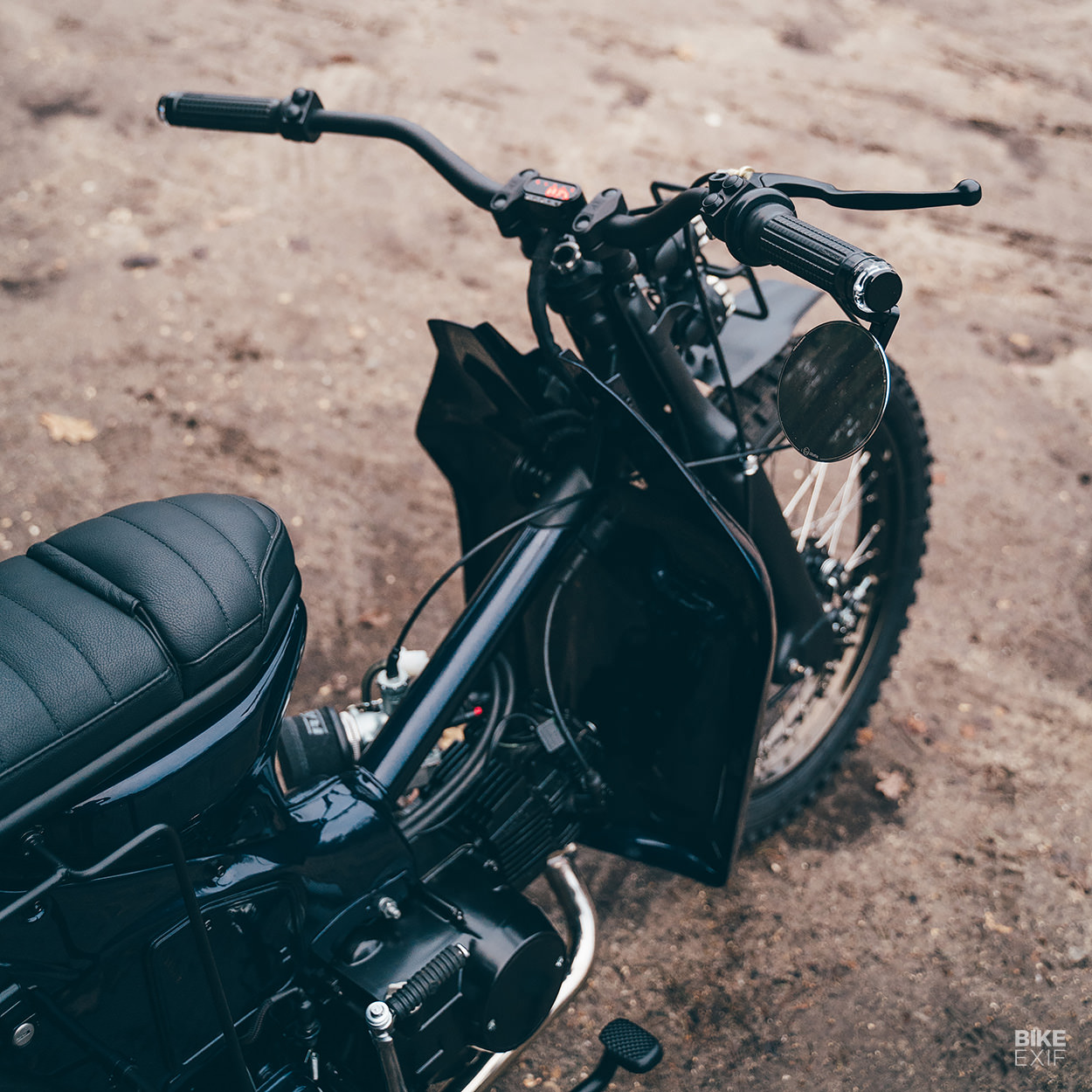 Jack used Motogadget parts elsewhere too; the bar-end and rear turn signals, grips, mirror, switches and tiny digital speedo are all from the German company. The scrambler-style handlebars and risers are from Gazinni, with all the wiring running inside the bars.

Out front is a pair of Highsider LED headlights, mounted on a custom bracket with a hand-made metal guard. 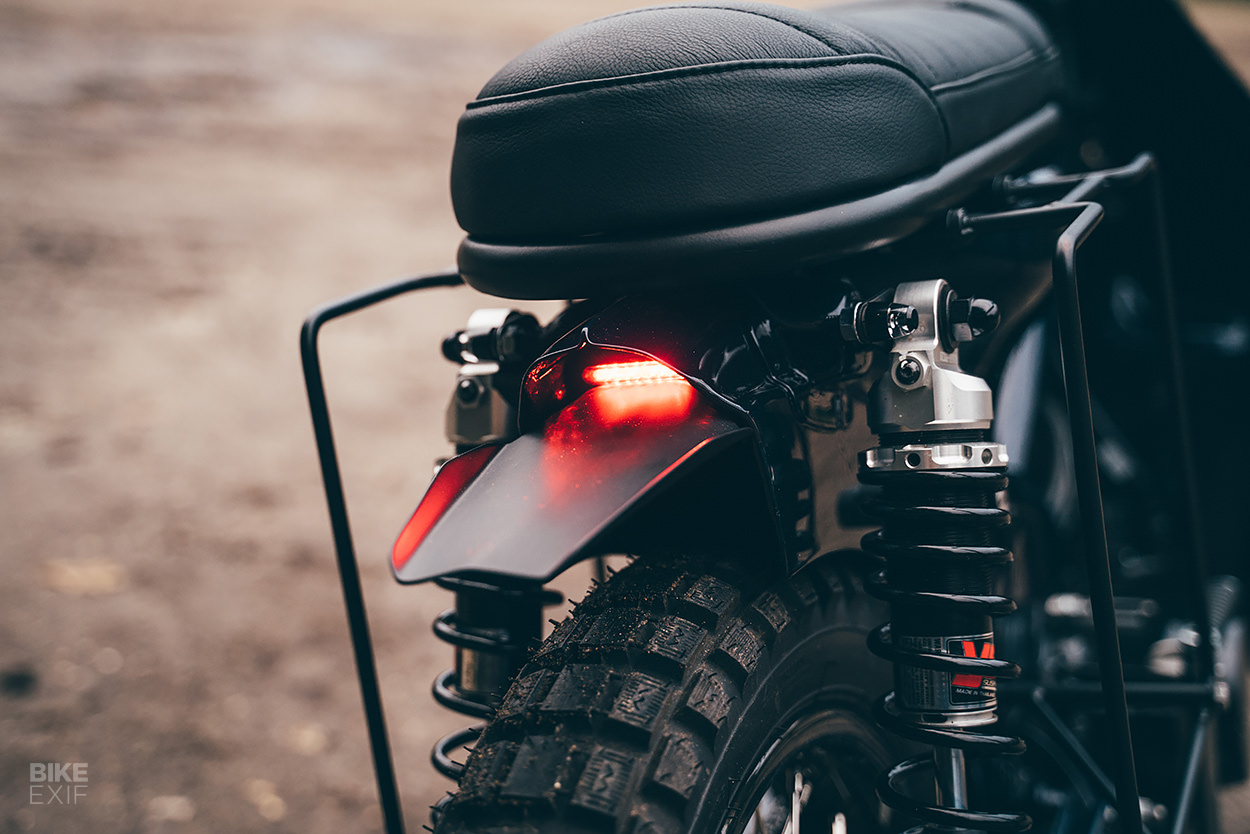 At the back is a custom subframe to support a simple bench seat. The front third lifts up to reveal the fuel filler, and snaps back in place with a magnet. Rounding out the tail is an LED taillight, tucked in deep above the rear fender on a 3D printed bracket.

Jack also fabricated a set of bolt-on pannier brackets to carry a set of soft bags. He designed them to not only be easy to attach and detach, but also so that the bike would look equally clean with or without them on. 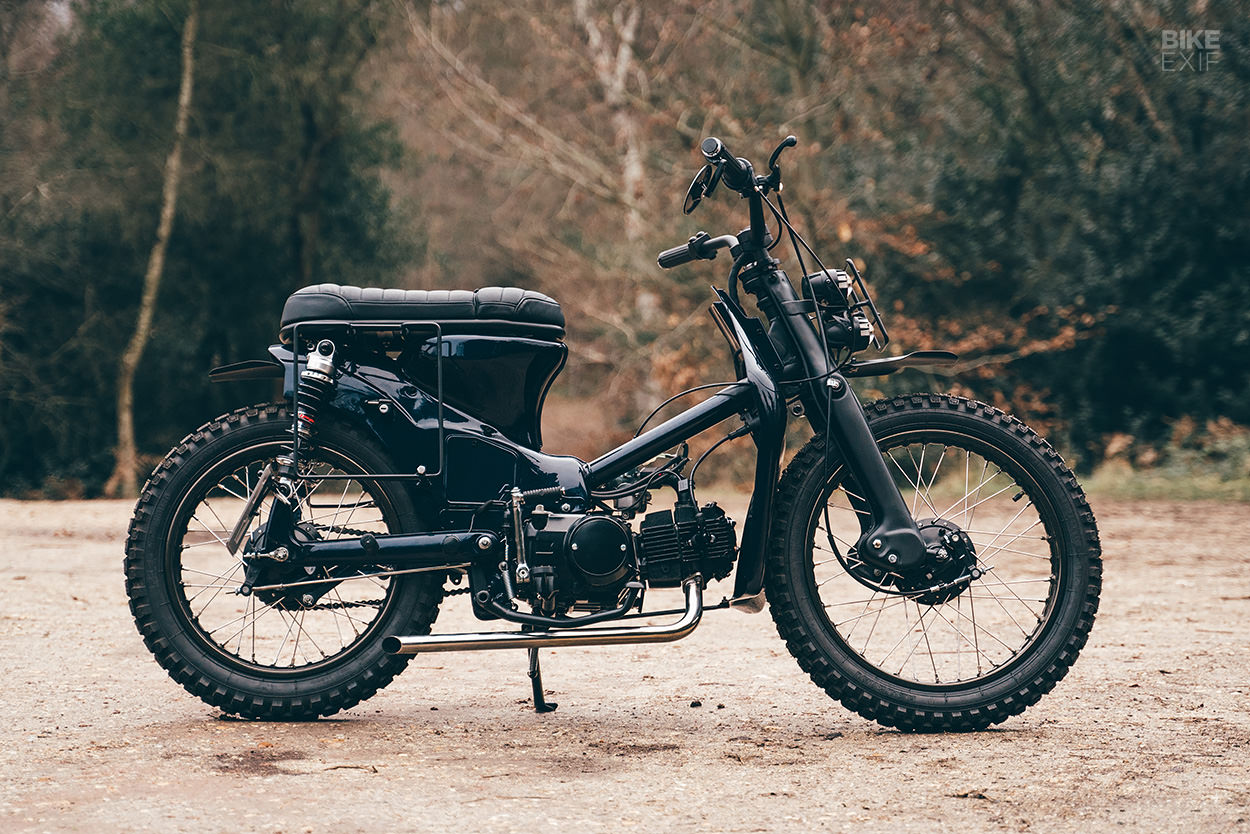 The simple down-swept stainless steel exhaust is another one-off piece, and has a small baffle inside to keep the noise levels civilized. “The brake pedal had to be altered quite considerably to get it to operate around the exhaust,” says Jack. “This took time because I wanted it to look unaltered.”

“This is a good example of my philosophy for certain areas of the build: for people at first glance to not notice that it was much different from the original iconic design. However, in detail it’s a totally different bike.” 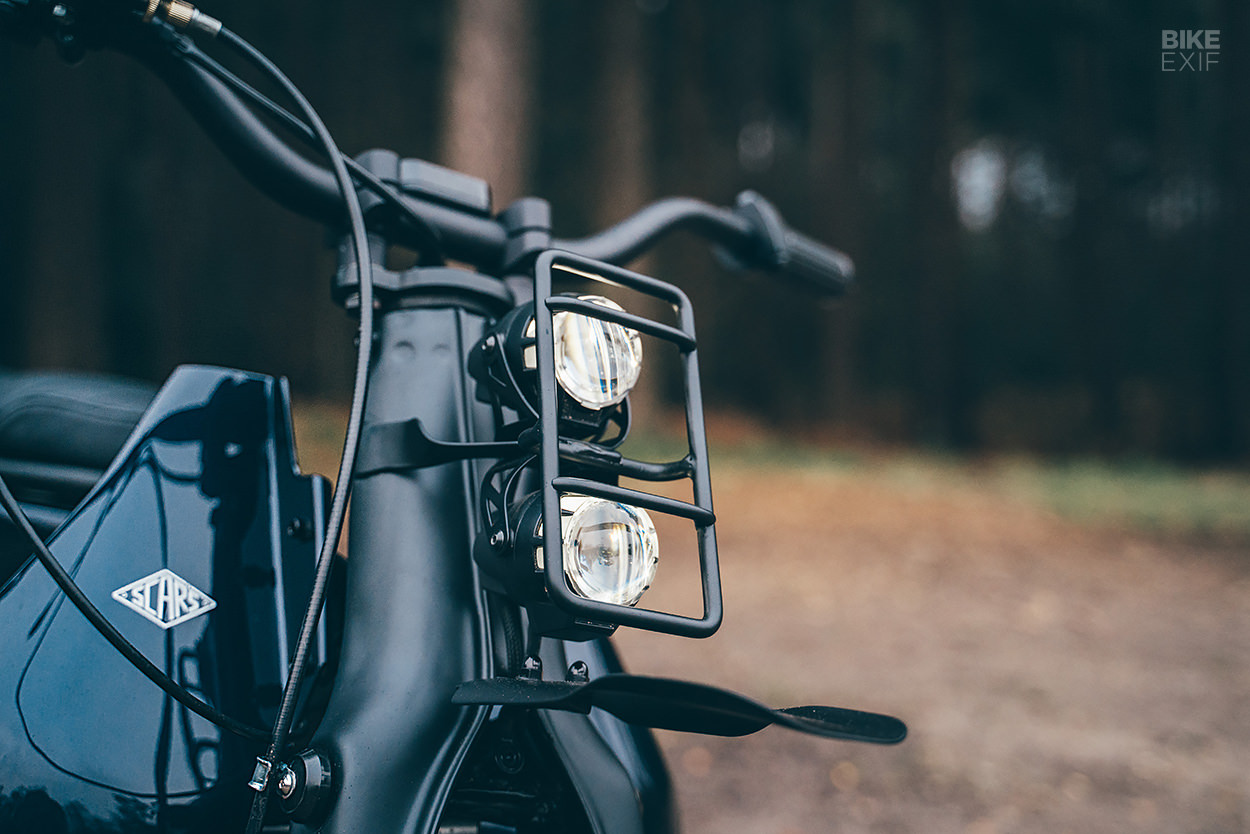 The last piece of the puzzle was the Cub’s leg guard, which, although it mimics the original fairing, was built from scratch with a slightly more modern look. Jack shaped it from aluminum, along with the bike’s fenders. “I hadn’t had much metal shaping experience at all previous to this build, so this was quite a challenge to say the least,” he admits.

In the shade, the Super Cub’s paint job looks almost black—but it’s actually a deep metallic blue, with bronze powder coating on the rims. As liveries go, it’s about as subtle and tasteful as you can get. 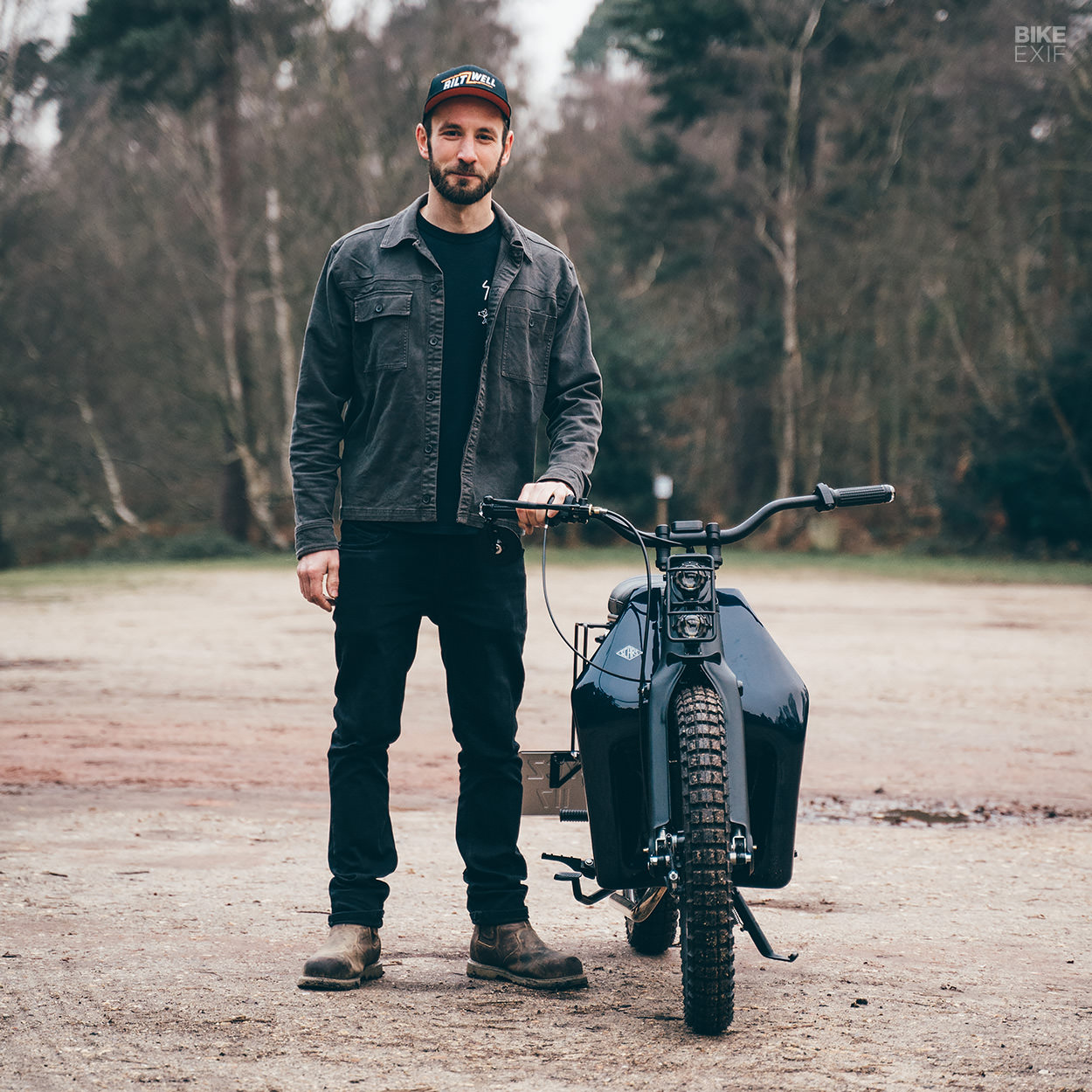 As a slick city runabout that can meander down fire roads on the weekend, this Super Cub hits the spot. Heck, it’d even be fun to go touring on—as long as you have enough vacation days saved up. 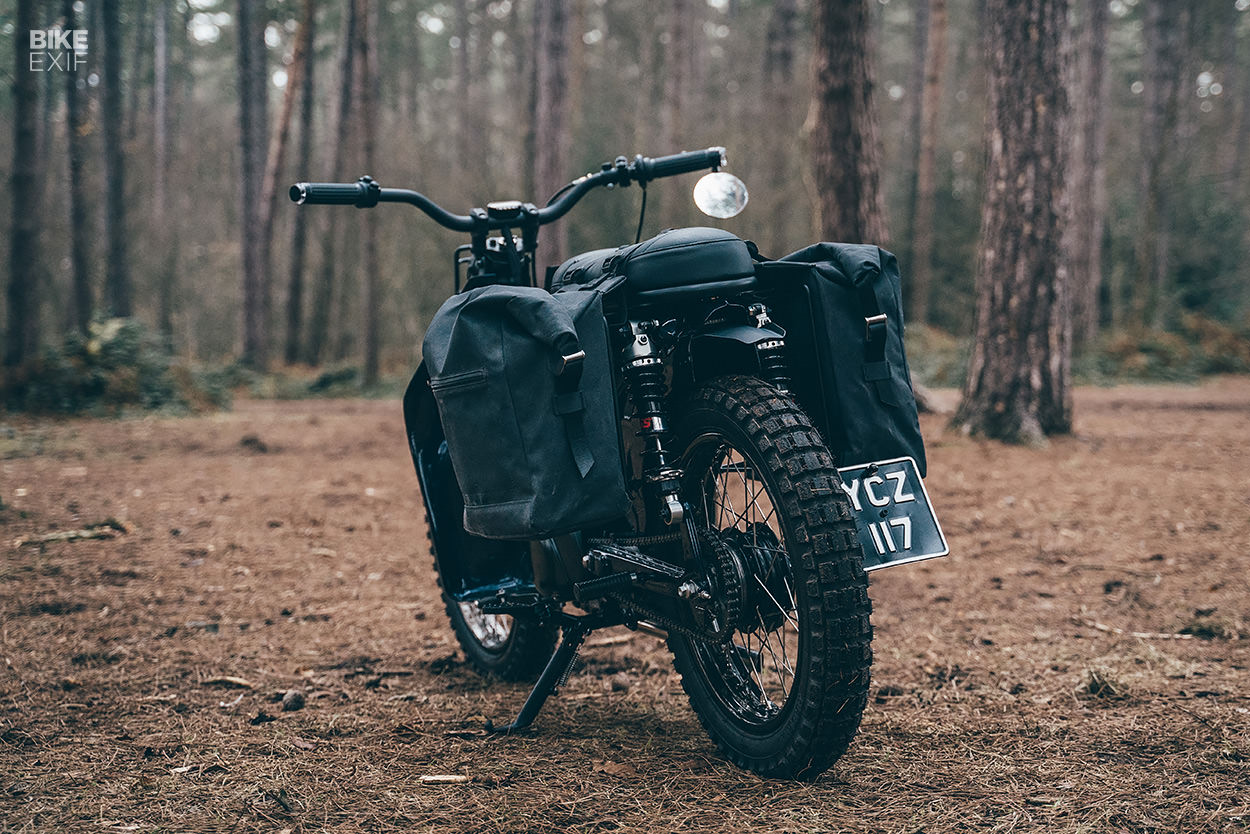